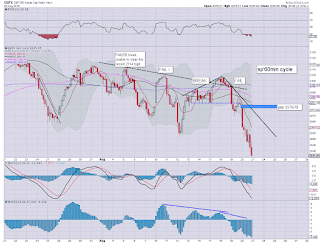 *closing hour.. moderate chop, a failed attempt to rally, but then breaking marginal new lows into the close.

So... quite a day... but on any fair basis, nothing for any of the bears to get overly hysterical about. We've held most of the broad supports, and VIX remains 'relatively' low in the upper teens.

-
Having dropped AAPL-short and VIX-long shortly after the open, I am back on the sidelines, with no intention to get involved again until next Mon/Tuesday.