The US indexes saw a bit of a choppy and mixed week. Importantly, some indexes made new historic highs, with the sp' hitting 1698 and R2K 1056. Yet, the two leading indexes - Trans/R2K did close the week with net declines. The current up wave is likely close to completion.


Lets take a look at six of the US equity indexes... 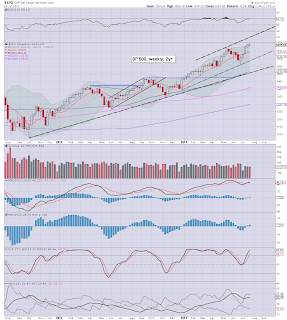 With the latter day recovery on Friday, the sp' managed to close the week effectively flat. Near term trend remains bullish, but you can certainly see a very high potential for another rollover within the next 1-3 weeks.

Primary downside is the rising weekly bollinger, currently 1526, which will have risen to around 1575 by mid September. I do not see any hope of <1500 before October, and that would require a bounce from a Sept' low to quickly fail. 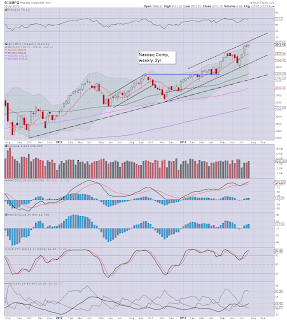 The tech sector was the strongest index of the week, climbing 0.7%, and that makes for a gain of 9% in just 5 trading weeks - exceptional on any basis. Underlying MACD (blue bar histogram) cycle ticked higher for a fourth week, and bulls remain firmly in control.

Best bear case for September downside are the 3200s, which is about 13% lower. Sub'3000s look impossible within the near term. 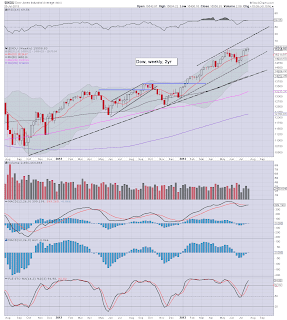 The mighty Dow managed a micro 15pt gain across the week, having recovered over 150pts from the Friday morning low. This was the fifth week higher. Weekly charts will be offering the 15700/800s next week, that's another 2% higher. Best bear case into September is arguably no lower than 14500. 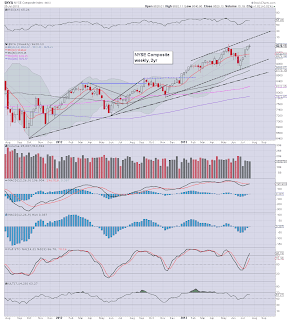 The master index closed the week flat, but underlying pressure clearly is still to the upside. The NYSE Composite does not look like it will be able to hit the huge psy' level of 10k in the current up wave. Indeed, downside to around 9200 looks likely into September, although that is only 5% lower. 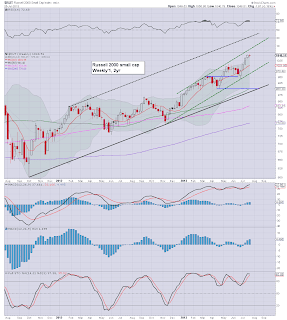 The second leading market index slipped 0.2% this week, and closed the week with a rather classic tiny red doji candle. Market indecision indeed, but still, the broader trend remains to the upside, and the bulls can tout a new historic high of 1056 earlier in the week.

The 1100s do not look not look viable in the current up wave, with likely downside to around 950 in September. Where things would get VERY interesting, is if the R2K breaks <900. If that occurs, then perhaps a more major cyclical top has been put in. 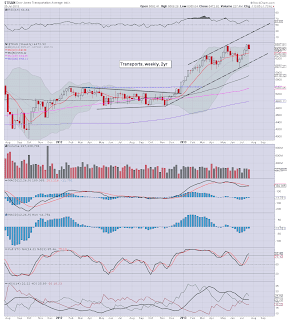 The old leader was especially weak, and fell by a rather significant 1.75% this week, and its important to note, declines were twice that at one point.

The tranny is clearly finding it difficult to break, and close in the 6600s. It is entirely possible that the transports is already exhausted, and no new highs will be made in the current up wave.

Downside target for September is the big 6000 level. Yes, that would be a break of the lower channel line, but it would sync up with the rising 50 week MA, and the old lows from both April and June.

So, this was week'5 of the latest wave of QE-fuelled nonsense.  Certainly, there have been some major earnings misses, especially on the revenue side. Yet, there have also been a few positive signs, not least in the still hysteria-surrounded FB.

As ever, the Transports and Rus'2000 indexes are the market leaders, and with them both showing net weekly declines, they are probably again offering the first early warning of trouble for the rest of the market.

Baring an end to QE, I simply find it difficult to envisage a key multi-year top being put in any time soon. We continue to see the effect the QE-pomo program is having on the US equity market, day in...day out.

It greatly annoys me, but the following outlook is what I am currently expecting... 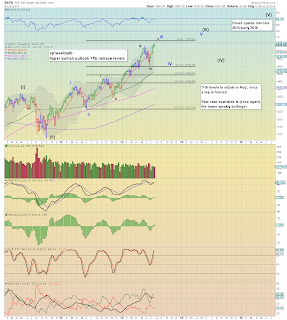 There is a fib' level retracement already added, I will adjust that in the coming days. once a top becomes apparent. Best guess right now, we max out somewhere in the sp'1710/20s..before a swift reversal.

You can see the next wave lower (blue IV) should have a fair chance at falling back into the 1550s. As ever though, the longer it takes to fall, the downside becomes less. I certainly continue to see the lower weekly bollinger as a key level of support - as have been seen across many down cycles in the past few years.

Monday starts off rather quiet with just minor homes data. Things really get going on Tuesday with more home data/consumer confidence, but most important of all...

FOMC meeting begins Tuesday, with the announcement on Wed @ 2pm. I'm not sure if the Bernanke will be doing a press conference shortly after.

Wednesday is rife with key econ-data. ADP jobs data, GDP Q2 - market is expecting 1.1%. However, the new GDP data will factor in a whole array of new items, with a rebasement of ALL previous numbers. For the economists out there, it will be a busy day.

Also on Wed', Chicago PMI at 9.45am..which is usually quite a market mover.

Thursday has another array of data, including ISM manu'.

Friday concludes with the monthly jobs data, market is expecting 175k net gains, with a slightly lower headline rate of 7.5%. Those do not seem very bold targets, and we're more than likely to exceed them.

*there is significant QE-pomo on Monday of around $3bn  The bears have a small window of opportunity across Tue/Wed, where there is no QE of significance. It is currently unknown if there is any sig' QE on Thur/Friday.

Based on what the Bernanke/Fed have said in recent months, I do not expect any reduction in QE at this FOMC, nor at the September 17' meeting.

No doubt the media will get jittery ahead of the announcement, and likely relieved after. Certainly though, that doesn't mean Mr Market won't decide to use the event as an excuse to sell sharply lower.

On balance, we look to trade higher across Mon-Wed, the sp'1710/20s look viable, and perhaps the market will indeed see a brief spike on Wednesday - whether a result of 'better than expected ADP/GDP data..or on the relief of no QE-taper.

Regardless, I am seeking the current multi-week up wave to be complete either this week..or early next, and I will indeed be looking to cautiously start shorting the main indexes.

back on Monday :)
Posted by Trading Sunset at 20:00:00
Email ThisBlogThis!Share to TwitterShare to FacebookShare to Pinterest

Which way for commodities?

Whilst the main US equity market continues to rise, the commodity market is still lagging, and slipped a rather significant 2.2% this week. The CRB looks set for a major breakout within the next few months, as ever...the only issue is..which direction! 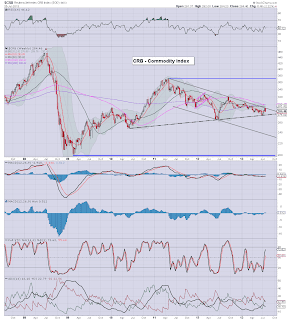 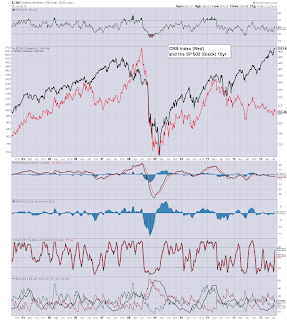 For the CRB, you can clearly see the mid-term trend is still to the downside - from the spring 2011 peak, and we've seen this down trend reflected in this past weeks decline.

The break levels are pretty clear...

A few weekly closes above either level, should provide good initial confirmation for where commodities are headed into 2014.
--

The discrepancy is indeed severe, and at some point the two are going to re-sync. The only question is whether commodities play catch up to equities, or equities drop like a rock - or a combination of the two.

Considering that QE is likely to continue into 2014 (if not 2015/16), best guess would be that commodities will eventually start to ramp, although not necessarily at a rapid pace relative to rising equities.

--
more later today...on the US weekly indexes
Posted by Trading Sunset at 12:00:00
Email ThisBlogThis!Share to TwitterShare to FacebookShare to Pinterest

The main indexes closed mixed for the week, but the underlying trend remains to the upside. Yet, if the chart maniacs are correct, we are close to completing the strong wave from the sp'1560 low. Weakness across Aug/Sept' is the outlook, back into the sp'1500s. 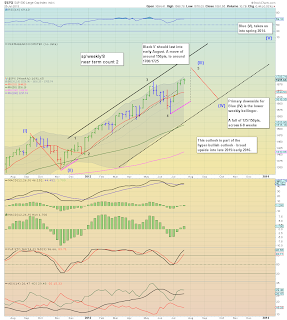 The fifth week to the upside from the sp'1560 low, and the fourth green candle on the weekly rainbow chart. Clearly, the bulls are still very much in control, but we're fast approaching the price/time zone that I initially outlined some months ago.

As is often the case, we could see 3-6 weeks of chop, before some stronger downside. So, right now, September would be the prime time for a mini VIX surge - back into the 20s, with the sp' back in the 1500s.

*next main post..late Saturday, on the US weekly indexes
Posted by Trading Sunset at 04:00:00
Email ThisBlogThis!Share to TwitterShare to FacebookShare to Pinterest

The main indexes closed well off the morning lows, with the sp' managing a fractional gain, +1.4pts @ 1691. The Trans was strongest with a gain of 0.5%, but the R2K was weak -0.5%. Near term looks like a sub'4 wave is now complete, with a small upward fifth next week. 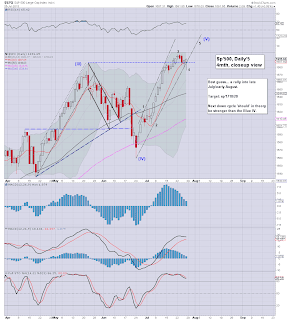 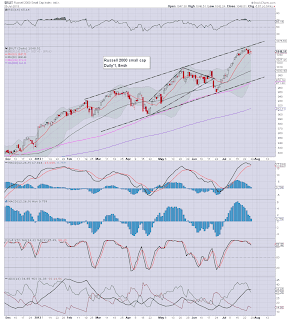 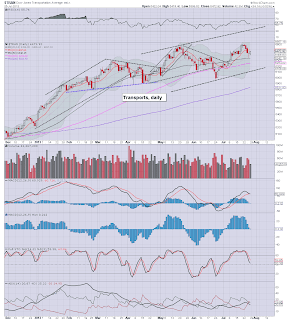 Perhaps most interesting is that the underlying MACD (blue bar histogram) cycle ticked lower for the ninth day. With the market a mere 7pts shy of its recent historic high, the MACD cycle is arguably indicative of the bulls merely consolidating the indexes sideways, whilst the daily cycles are reset from overbought levels.

If the sp'500 count is correct - and I've reasonable confidence in it, then we're set for a sub'5 to the upside next week. Weekly charts will be offering 1715/20 next week....so the bulls have around 2% to look for.

Next week will be all about the FOMC, GDP Q2, and the monthly jobs data. It is possible the bulls will rally for another 'few weeks', but I'm guessing no. I think this nonsense from the sp'1560 low concludes next Tue/Wed in the sp'1710/20s.