The transportation index is long considered the old 'leader', and is certainly an index I've come to realise is vital to follow. Over the last few years it has often been the leader (along with the Rus'2000 small cap) in many of the major down cycles. 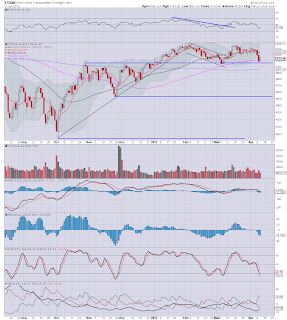 Daily cycle looks like its holding key support...barely. Today did not close massively bullish, but still, it was a positive close, and bulls will need to see at least some follow through Thursday/Fri. 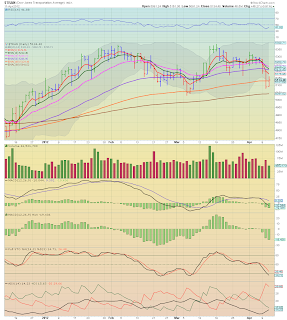 From this chart, things looks a little more clearer, we have no turn at all yet, but we are pretty low on the cycle, its not a particularly bad place to enter new long positions..with a tight stop of course!


A reminder on the bigger picture... 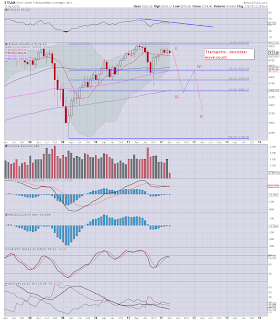 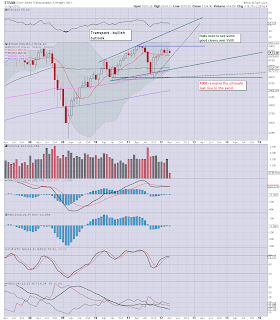 I think the Transports sums up where the main market is right now. Unlike the other indexes, the transport is in a particularly tight range. Whichever direction we do end up going in the next month or two, its going to be a major move.

Whichever side you take in this crazy market, the old leader index is one to keep watching!
Posted by Trading Sunset at 23:30:00
Email ThisBlogThis!Share to TwitterShare to FacebookShare to Pinterest

Hmm...so..we did close UP today. We had the nice opening jump, then some churn for a few hours...and we closed with nothing less than what is a very straightforward baby bull flag on the 60min cycle charts. Minimum target would be around 1385/95 within the next 3-7 trading days. I beleive the thing to look for is if we get consistently stuck around 1400 - especially if that's where we end at next Friday opex. 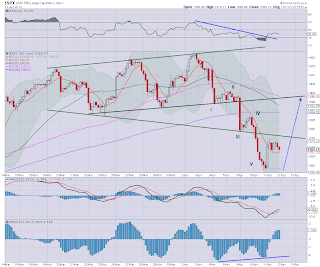 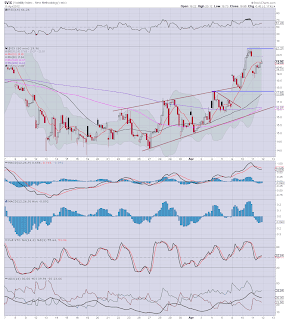 Indexes did what they needed to do to confirm a near term floor. We've seen the 5 waves complete, and now we're on our way up. If its a typical ABC/123 up, then I'd guess we've not even completed the A' wave yet.

If the mid-term floor is in (with new highs above sp' 1422> within 2-4 weeks), then market needs to get outta this danger zone as quickly as possible. The 50 day MA is Sp'1373, a close tomorrow above that level would be something the bull camp should be aiming for.

A slightly concerning issue for the bulls tonight would be the VIX. It only closed 2% lower, although as I've noted for some weeks, anything under VIX 20' is arguably noise and largely irrelevant.

--
There remain some very serious early warnings out there on the bigger cycles, especially in the commodity world, which I will deal with later this evening.
Posted by Trading Sunset at 21:15:00
Email ThisBlogThis!Share to TwitterShare to FacebookShare to Pinterest

We hav an 'inside' day on many of the indexes - and indeed individual stocks. 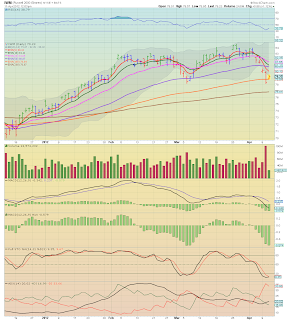 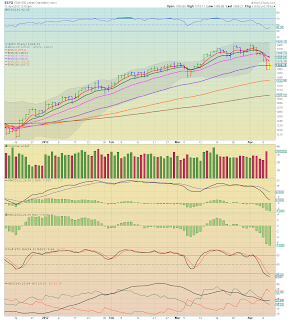 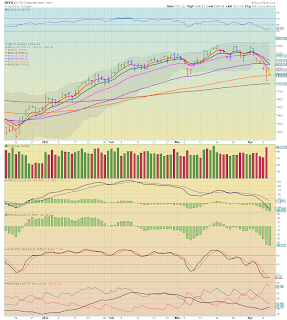 Just look how low the MACD (green bar histogram) cycle is on all 3 charts. We are about as low as we ever go. Considering the '5 waves down' theory looks to have turned out correct, it would appear we've a good likelihood for moving upward all the way into opex next Friday. Yes, there is the real chance of maybe as many as 7-10 'generally' up days. That would really drive the doomer bears nuts.

What now matters is how high can we go? If we get stuck around 1390/1405..that's just no good from a bullish point of view. Bulls need to whack this market up, and break back over 1415..and break a new high - preferably before month end. The next 4 trading days are absolutely critical, and arguably will determine how the next few months proceed.

More later...probably after the close.


Posted by Trading Sunset at 17:13:00
Email ThisBlogThis!Share to TwitterShare to FacebookShare to Pinterest

So, the 'clear 5 waves down' was indeed correct. Now we're getting the up move.

or....
Is the bounce the first wave of a new major wave higher - which would take us to new highs in late April/May.

My 'best guess' right now would be that we WILL see new highs. The reason is that the style and level of the top doesn't make much sense to me. I could easily be wrong, and we'll soon find out, within the next 3-7  trading days. 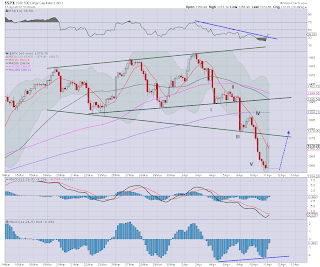 First target would be around 1385/90. A move above 1400 by the Friday close would be a real stretch right now. 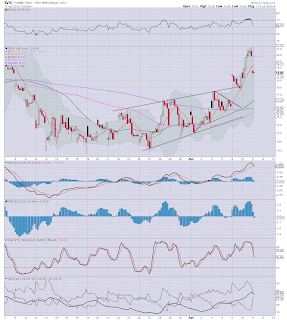 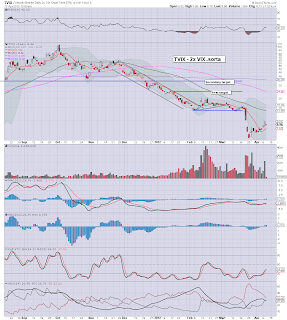 They had an opportunity to exit, and rather than exit, I can only imagine just how many were adding to their TVIX positions yesterday. A FAILED ETN, and best left alone!

More later...
Posted by Trading Sunset at 15:02:00
Email ThisBlogThis!Share to TwitterShare to FacebookShare to Pinterest

The first 10 days of April have been very eventful, from a monthly cycle perspective. The main 10 world indexes which I now regularly highlight, are all starting to issue initial warnings.

Now, let gets one thing clear before any of the charts. What I believe matters is how we close April, not where we presently are. We could easily cycle back up for the rest of the month, and even close at new highs - although that now seems highly improbable.

So, I will most definitely return to these same charts at the start of May...but for now, lets look where 5 of the 10 indexes (the other 5 are broadly the same anyway) 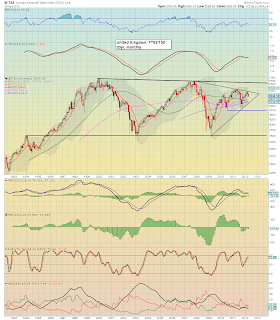 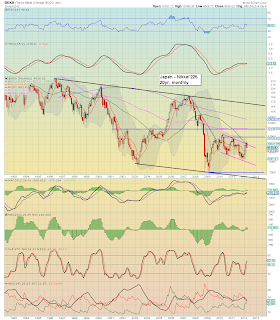 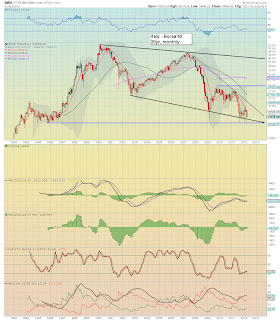 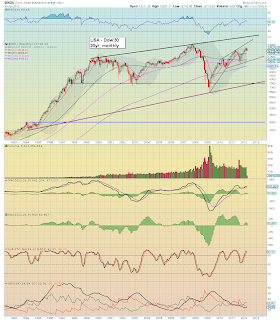 I won't go through the details of each chart, they largely speak for themselves. What I will note is that...right now...as at April'10, the monthly charts are flashing initial sell signals. We have failures at the 10MA on many, spiky candle tops, and some indexes are close to, or breaking key levels (see Spanish IBEX).

If we close April at these levels, the 7 month up cycle is arguably complete, and a new bearish down wave is beginning. If that is indeed the case by end April, I would strongly believe we'll cycle down to at least sp'1150 within 3-6months.