With the Dow breaking a historic high, and the sp' taking out the recent 1530 high, the VIX declined, although it arguably declined slightly less than might have been expected. VIX closed -3.8%  @ 13.48. A further 2-3 weeks of slow declines in the VIX seem likely. 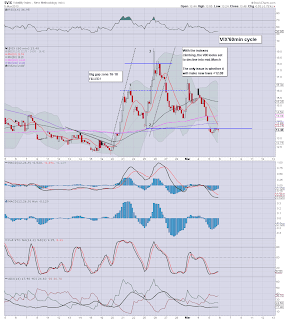 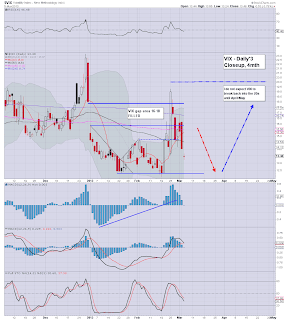 Not much to add, aside that it is going as expected.

No VIX 20s until late April/May, and that is probably the more 'bearish' outlook. There remains a disturbing possibility that the market will just keep going into mid-summer.

We should have a much clearer idea, dependent on the price action when we're in the sp'1560s.
- 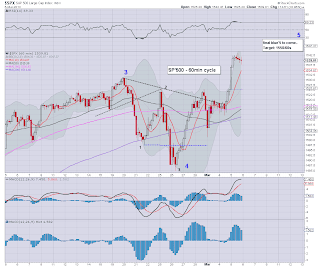 So..a new high for the Dow. The most bizarre aspect of it is how many in the ignorant mainstream actually think this means the economy is better.
--

*I remain largely on the sidelines, but went long Silver earlier today.
--

more later..on the VIX, Indexes..and other miscellaneous things!
Posted by Trading Sunset at 21:02:00
Email ThisBlogThis!Share to TwitterShare to FacebookShare to Pinterest

Market is holding onto its gains. Few bears remain, and those that do..have no power. A minor bull flag is possibly setting up on the hourly charts..with upside into the 1550s by this Friday.  VIX is only slightly lower, -3%, but as I feared, VIX 20s look set to remain absent until May. 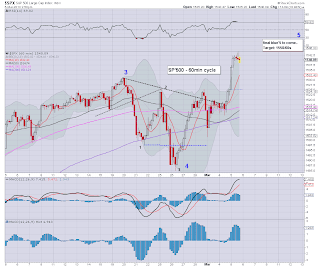 Minor chop into the close.

Regardless of where we close, the bulls have achieved a significant victory with the new Dow high..not that it was unexpected..with the transports seemingly headed for 6500..if not low 7000s.
--

I remain largely on the sidelines, although I'm likely to be riding SLV higher for some days ahead.
--

*I guess its time to turn on CNBC and see just hysteria filled, Ms. Bartiromo and her chief lackey..Mr Pisani are.

2pm update - fly me to the moon

Mr Market is very pleased with itself, the Dow is finally above the old 2007 high..and now..the proverbial 'moon' is coming. It remains both disturbing..and amusing to see how people believe higher stock prices must mean the economy is also improving.

Its arguably appropriate for an old classic... 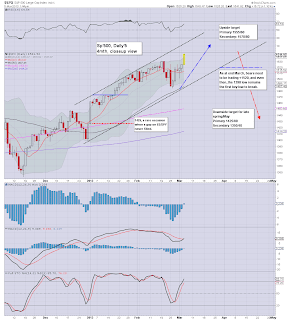 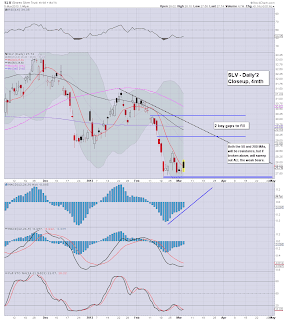 No doubt a lot of annoyed bears have been short-stopped out this morning Yet, its better than holding short from 1540..to 1555/60..or even higher.

The weekly charts are going to look very over-extended once we're in the 1550/60s.

--
*I'm not long the indexes, but I did take a minor SLV long a little earlier. I think there is a good chance of a double gap fill in the 29/30 zone.

However, I am still hyper-bearish on the metals into May/early summer though. SIlver could be in the teens by then. The gold/silver bugs will not be pleased!
--

back at 3pm
Posted by Trading Sunset at 18:47:00
Email ThisBlogThis!Share to TwitterShare to FacebookShare to Pinterest

The market is comfortably higher, and there is likely to be considerable follow through for some days, if not a few weeks. Whether we get stuck around sp'1550/60, we'll soon find out. Bears need to step aside, and not fight this latest up cycle. 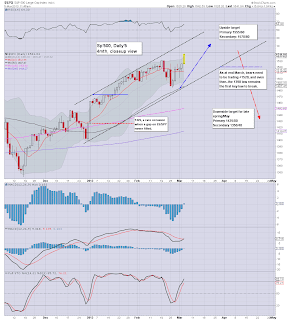 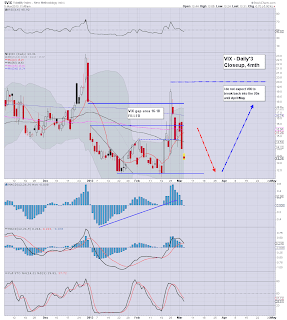 As I feared, once the 1530 high was taken out, the bulls are coming in..and chasing this nonsense upward.

The big monthly charts are absolutely clear, there is open air to sp'1550/60.

Its going to very difficult though to break into the 1600s.
--

back at 2pm
Posted by Trading Sunset at 16:51:00
Email ThisBlogThis!Share to TwitterShare to FacebookShare to Pinterest

Good morning. The Dow breaks a new historic high, and naturally, the clown finance TV cheer leaders are celebrating. More importantly, the sp' takes out the recent 1530 high..and we're now well on the way to 1550/60s. VIX is confirming the move. US $ lower, taking the pressure off Oil and precious metals. 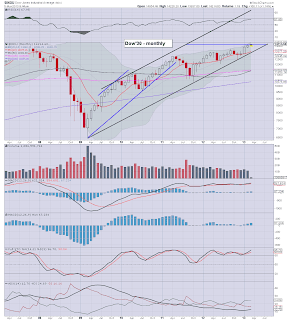 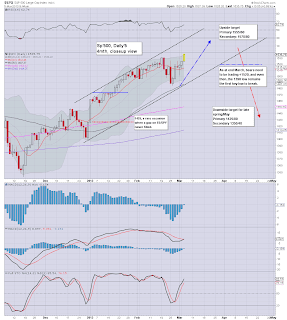 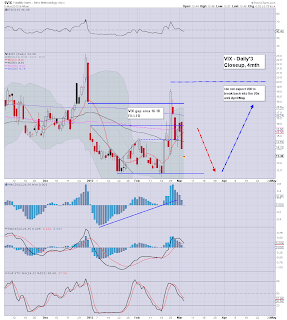 The only issue is whether it will just keep going into April..and beyond. We should know from the price action..in late March/early April.
-- 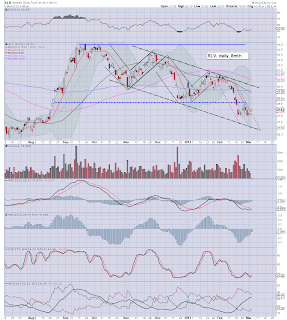 Silver and Gold are trying to break their near term down trends. With the $ index rolling over - and likely to decline for 1-2 weeks, metals, oil, and the main equity market looks set to be pressured UP.

back at 12pm
Posted by Trading Sunset at 14:48:00
Email ThisBlogThis!Share to TwitterShare to FacebookShare to Pinterest

A relatively quiet start to the week, but once again the early declines were recovered, and Mr Market closed a little higher. With the VIX looking like it'll be in the 13/12s within the next day or two, sp' looks set to take out the recent 1530 high. Upside to 1550/60 looks imminent. 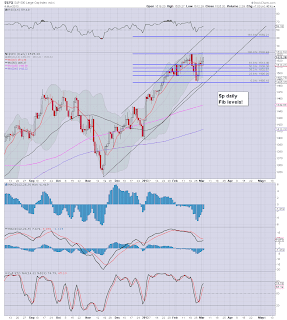 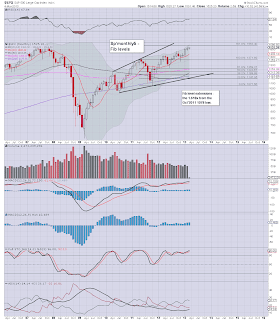 I realise you could draw the Fibonacci charts in so many different ways, but I kinda like what the above two charts are both suggesting...sp'1550s, sometime later this month.
--

Despite the Fed printing 1trn a year, we're just not seeing a ramp in the two key commodities of Copper and Oil. 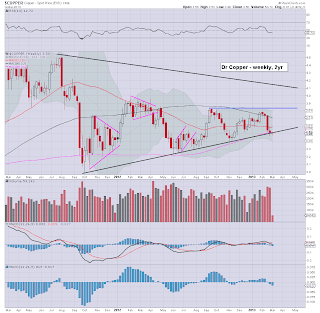 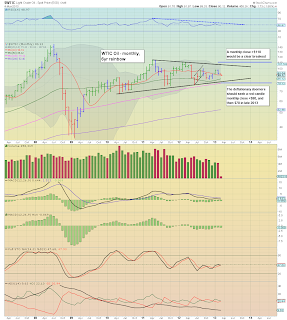 With Copper having broken (briefly) below 3.50 for the second consecutive week, and WTIC Oil breaking <$90, the doomer bears do have something to tout against the inflationists.

We have ISM data in the morning, if that comes in 'reasonable' it'll give the market the excuse to break into the mid 1530s, at which point you'll see an awful lot of bears capitulate once again.

I expect the market to like the jobs data on Friday, and my best guess remains this final wave will get us to around 1550/60. I suppose we could go a little higher, we'll just have to deal with that nearer the time.
---

Charles Nenner on Bloomberg...targeting Dow 5000, with a new bear cycle starting this year.

--
Finally, Zerohedge posted an interesting chart to remind us of the current large discrepency between the CRB index and the SP'. Here is my version, and I'll refer to this in the months ahead. 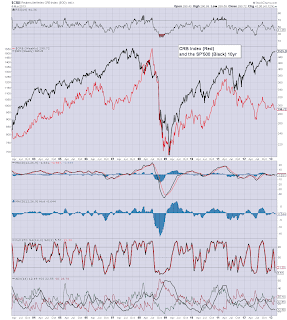 Roughly, the CRB would indicate we 'should' be around sp'1000/900s. The Ben Bernanke has a great deal to answer for indeed.

A quiet start to the week. Minor declines in the morning failed to hold, and the typical latter day recovery kicked in. Most indexes closed around 0.3% higher, although we're still a touch below the recent key high of sp'1525. Any price action over 1530 comfortably opens the door to 1550/60 within 2-3 weeks. 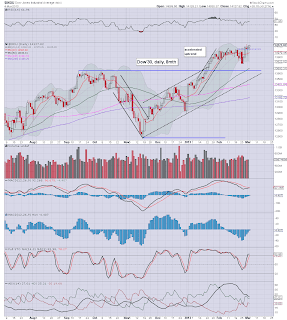 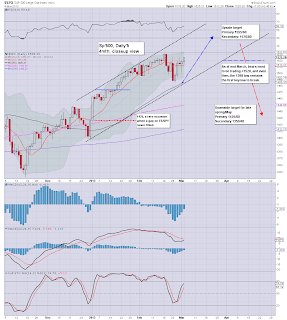 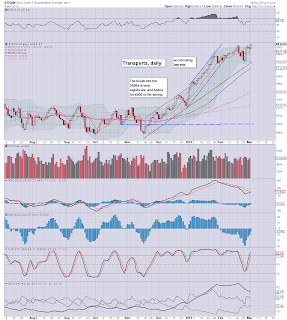 Very little to note..aside that we appear to be back into another few weeks of algo-bot melt.

How high are we going? Sp'1550/60 is my primary target zone, and if we get stuck, I'll launch major re-short into the April/May time zone.

Yet, bears should probably be very cautious. if the media gets a little hysterical this spring, and if everything is 'quiet' out there..sp'1600s are viable, before a major multi-month wave lower to 1400/1350.