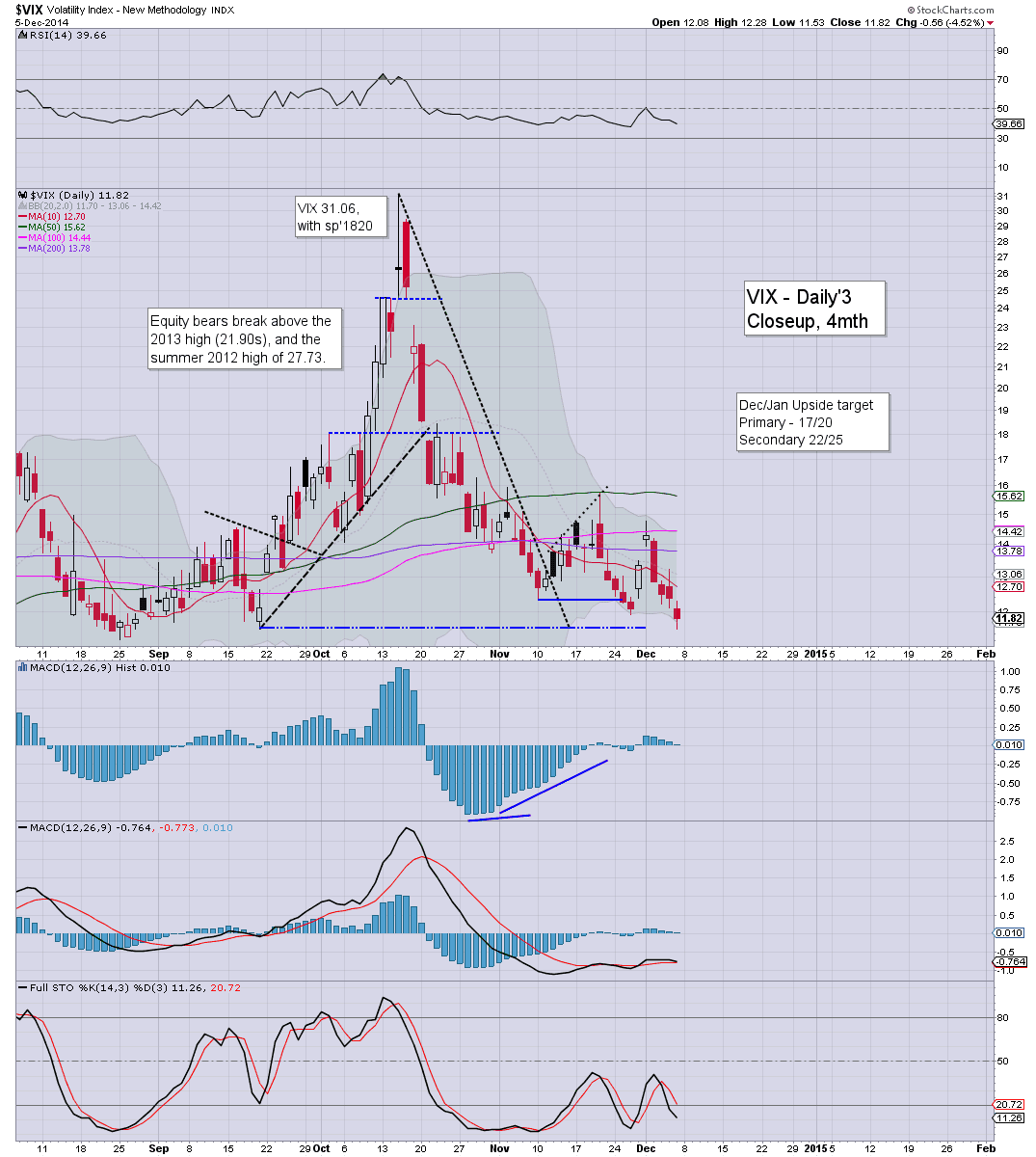 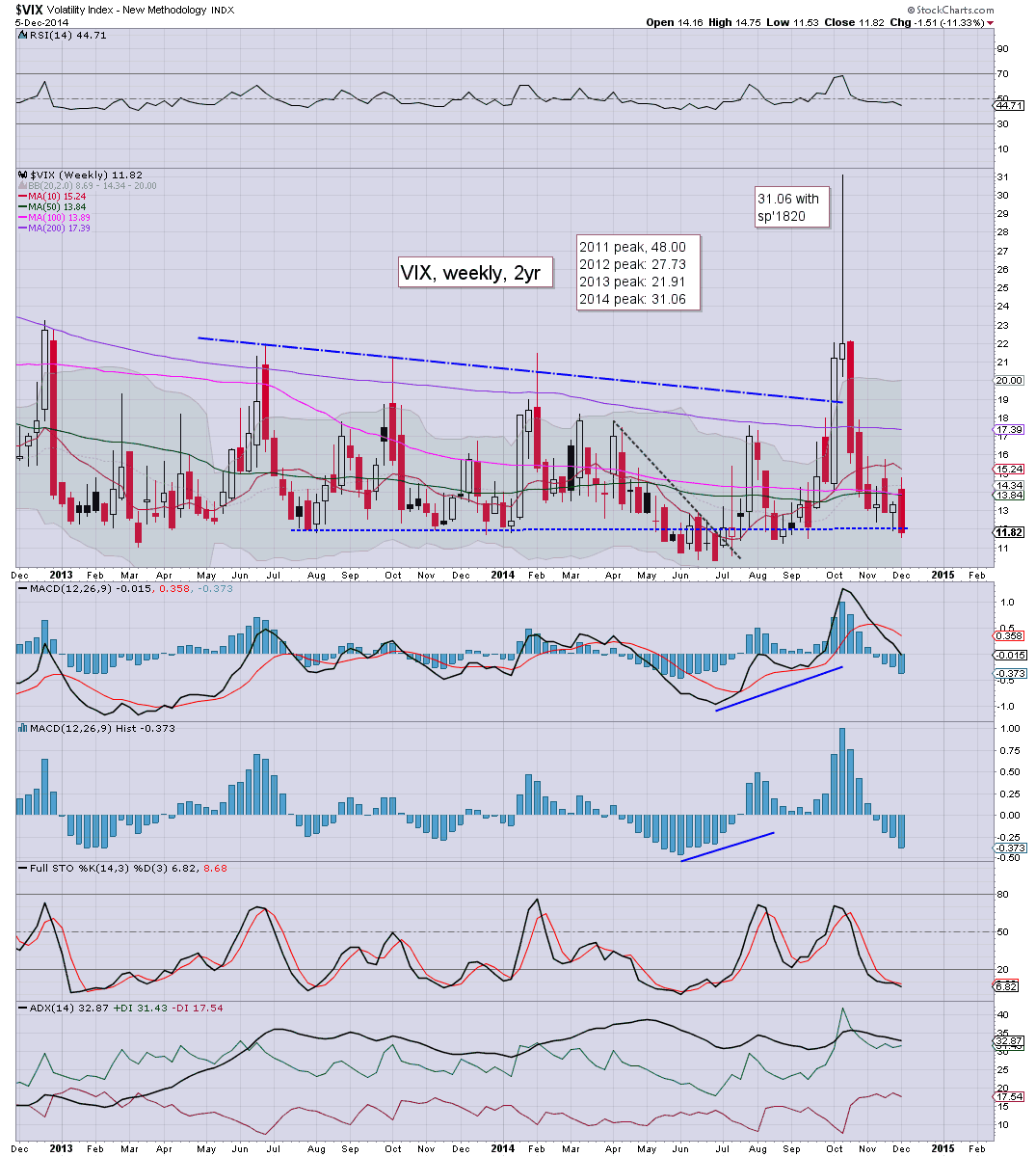 VIX remains very low, and with equity price action as it is - not least in the approaching 'Santa season' any spike much above the mid/upper teens looks highly unlikely. 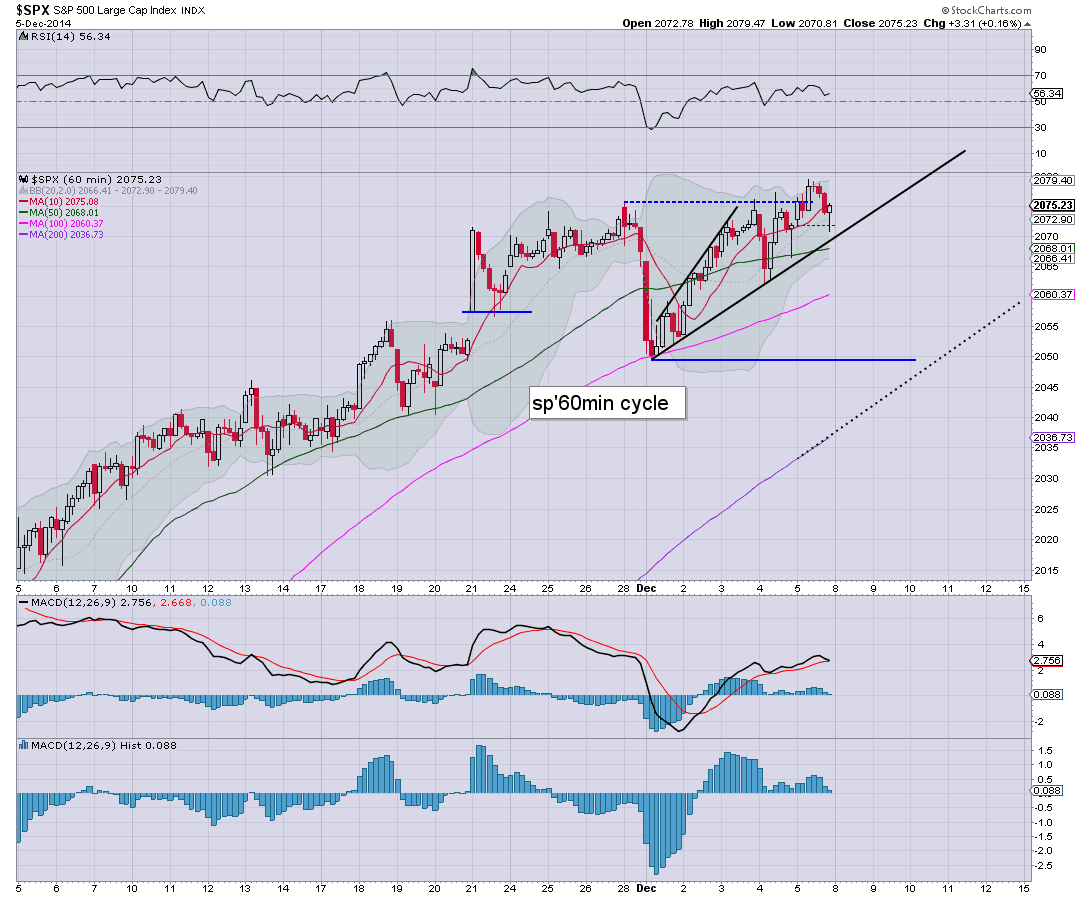 ... and another week in the crazy rigged casino comes to a close.

Seven weeks straight up.. from sp'1820 to 2079. Who would have dared suggest that by year end? Ohh yeah... Mr Carboni.. and Riley, both with their original target of the sp'2100s looking due in the near term. I'll be curious as to what they are saying in January.
--

Have a good weekend everyone.
-
A FULL set of updates across the evening.. to wrap up the week.
Posted by Trading Sunset at 21:01:00
Email ThisBlogThis!Share to TwitterShare to FacebookShare to Pinterest

3pm update - a seventh week for the bulls

US equities look set for the seventh consecutive net weekly gain. with the sp'500 having climbed 259pts (14.2%) since the mid' Oct' low of 1820. Metals and oil are both set to end the week on a particularly negative note... pressured by the strong USD. 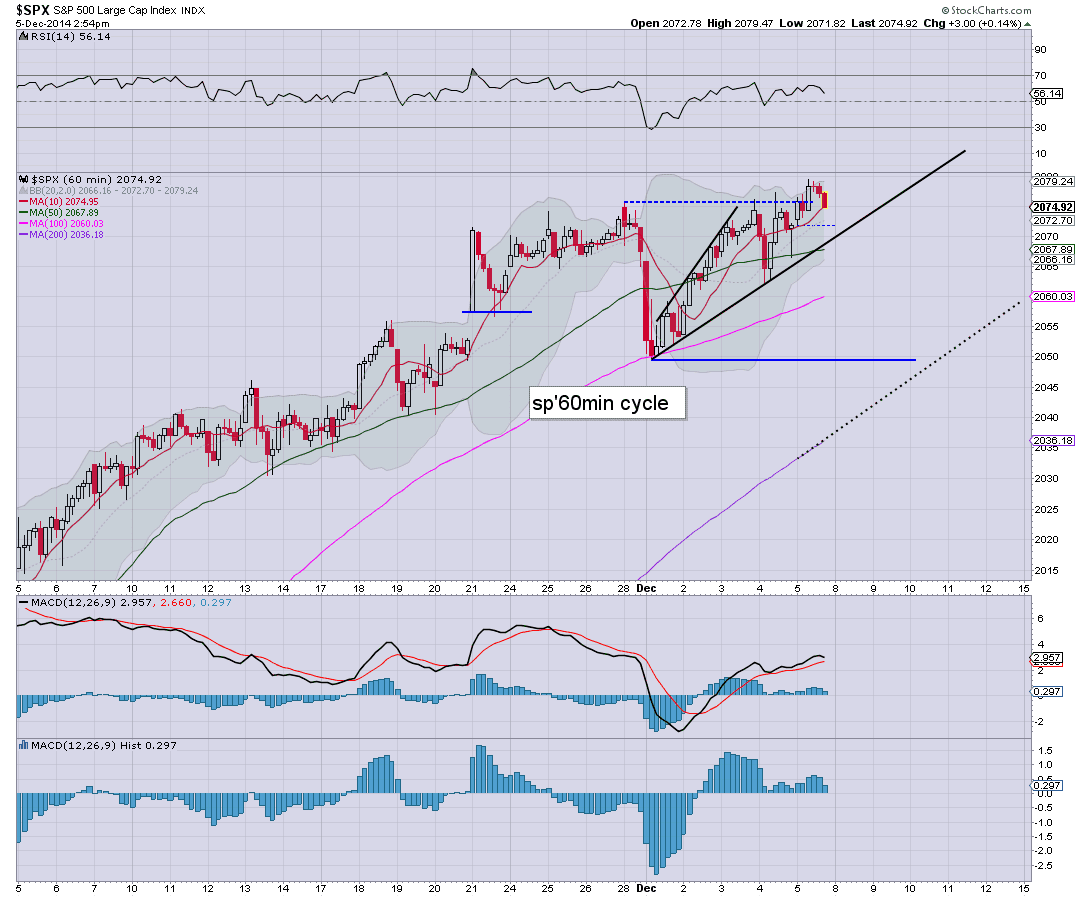 *hourly cycle is vulnerable to a bearish cross, but then.. thats been the case since Thursday morning.
--

Regardless of the close... its been another week for the equity bulls.

You can tell I'm tired.. I'm losing the ability to type even semi-coherent sentences...
Posted by Trading Sunset at 19:55:00
Email ThisBlogThis!Share to TwitterShare to FacebookShare to Pinterest

US equities are holding moderate gains, with the Dow and sp'500 having broken new historic highs. The higher USD is naturally pressuring commodities, with Gold -$15, and Oil -1.2%. VIX remains cooling, -5% in the mid 11s. 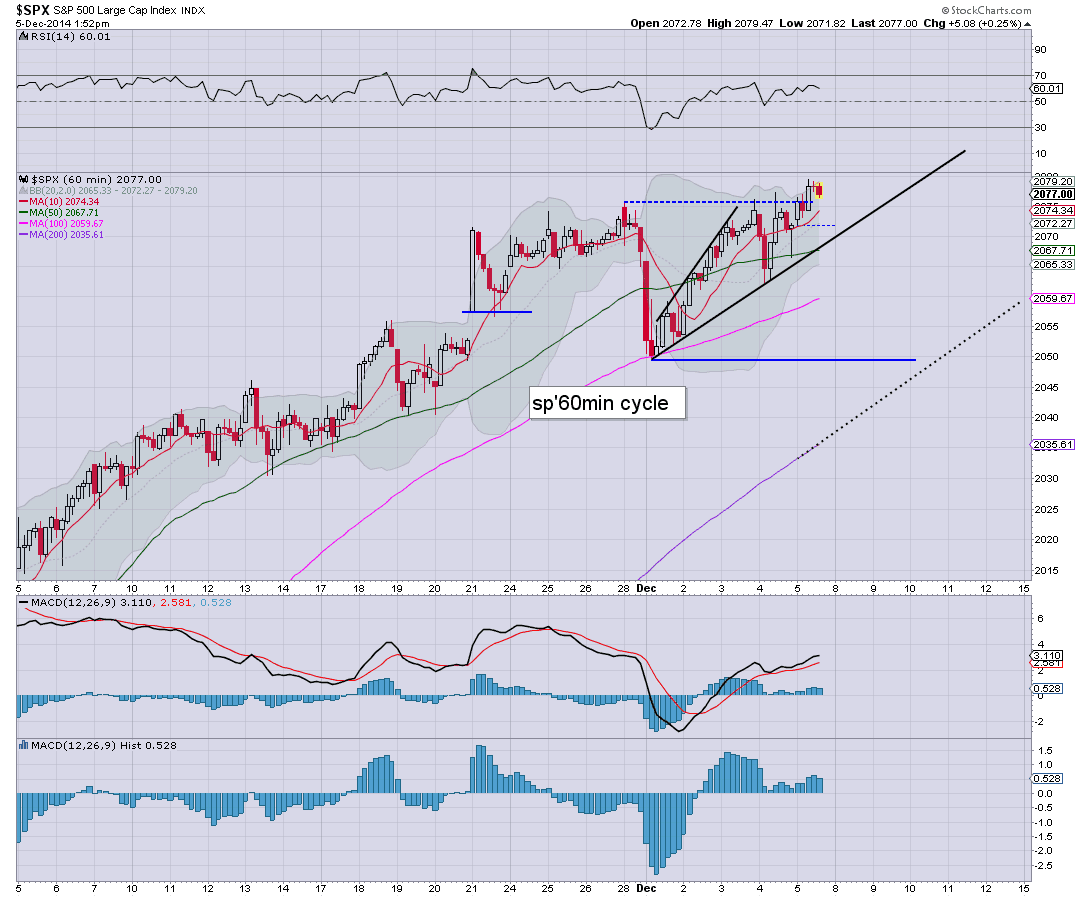 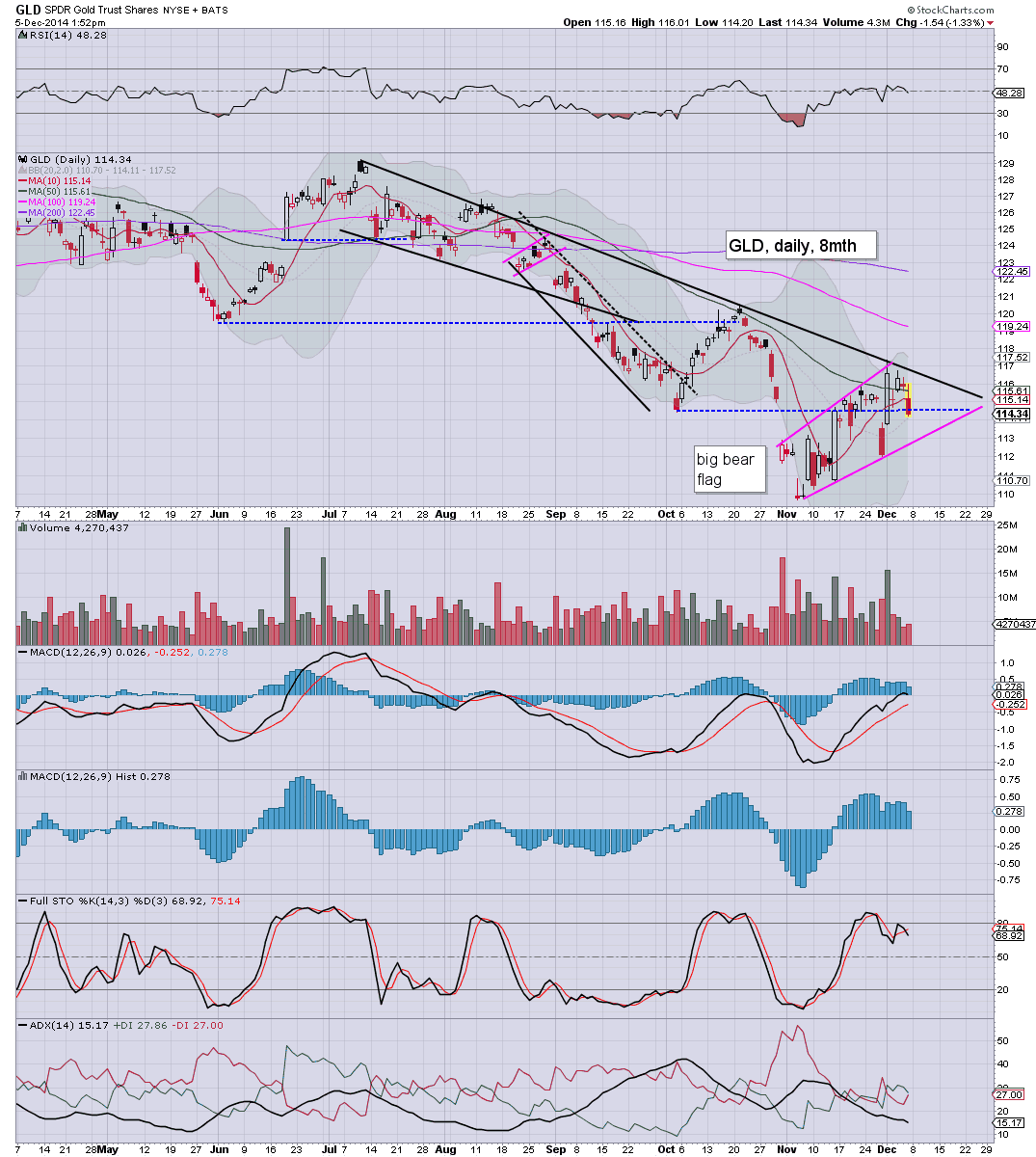 *price structure on the metals remains a very big bear flag.... a wash out into year end looks... probable. If correct, that would be bearish for miners.
--

So.. we're back to some minor price chop... but with underlying upward bias.

Its still possible we'll close today in the Dow 18000s, but regardless... the jobs data was (on any basis) very good, and the macro picture looks favourable into next year.

-
The oil/gas drillers are bouncing.. after new lows in the morning... RIG/SDRL are both higher by around 3%.. but remain lower since the summer by around 70%.
Posted by Trading Sunset at 18:55:00
Email ThisBlogThis!Share to TwitterShare to FacebookShare to Pinterest

Whilst we saw an entirely successful landing of Orion, the main market remains in algo-bot melt mode.. with the Dow set for 18k this afternoon. VIX is naturally cooling, -5% in the mid 11s. VIX 10s.. are not far off now. Metals and oil remain significantly lower. 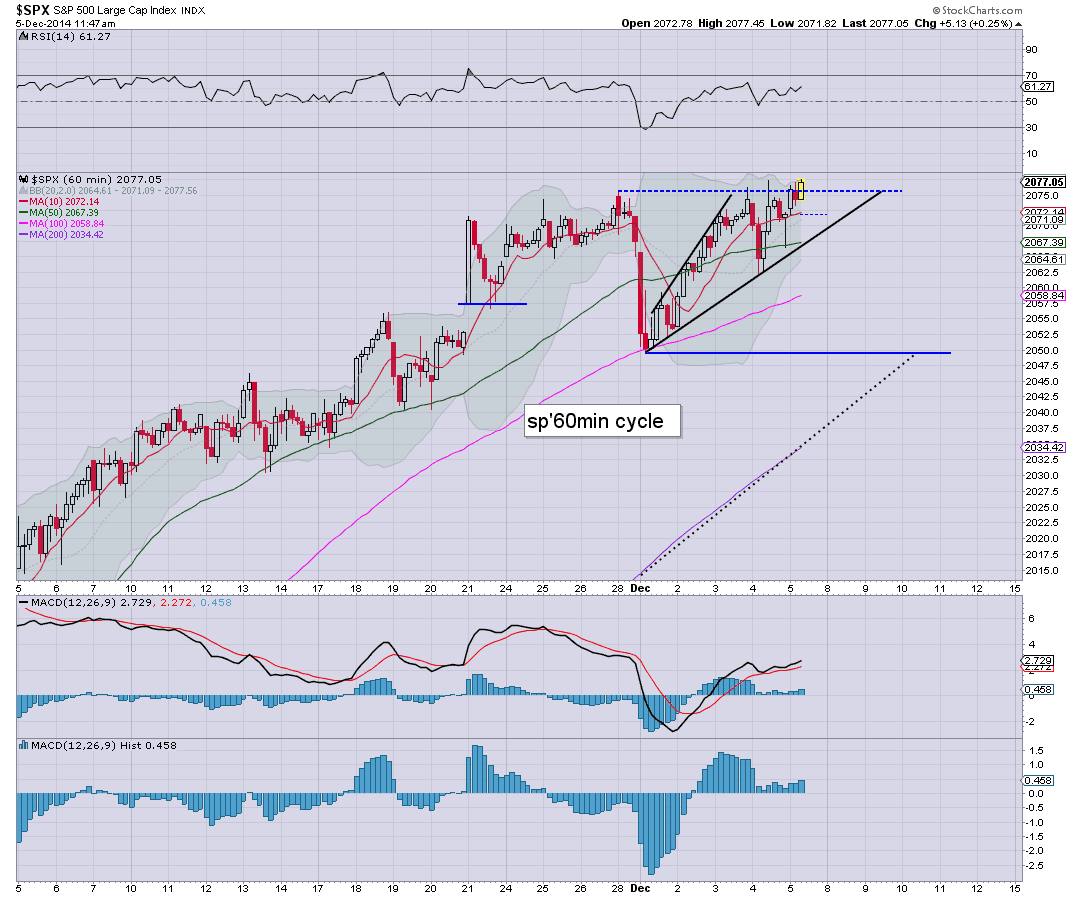 Regardless of the market nonsense, it has been great morning for NASA... and all those who have eyes on the skies at night.


--
time to cook... back at 2pm
Posted by Trading Sunset at 16:49:00
Email ThisBlogThis!Share to TwitterShare to FacebookShare to Pinterest

Whilst the US equity market sees moderate gains... the Orion vehicle has done almost two full orbits.. and is set to land in the eastern pacific. Meanwhile, with the USD building gains, metals remain weak, Gold -$12, whilst Oil is lower by a very significant -1.9% 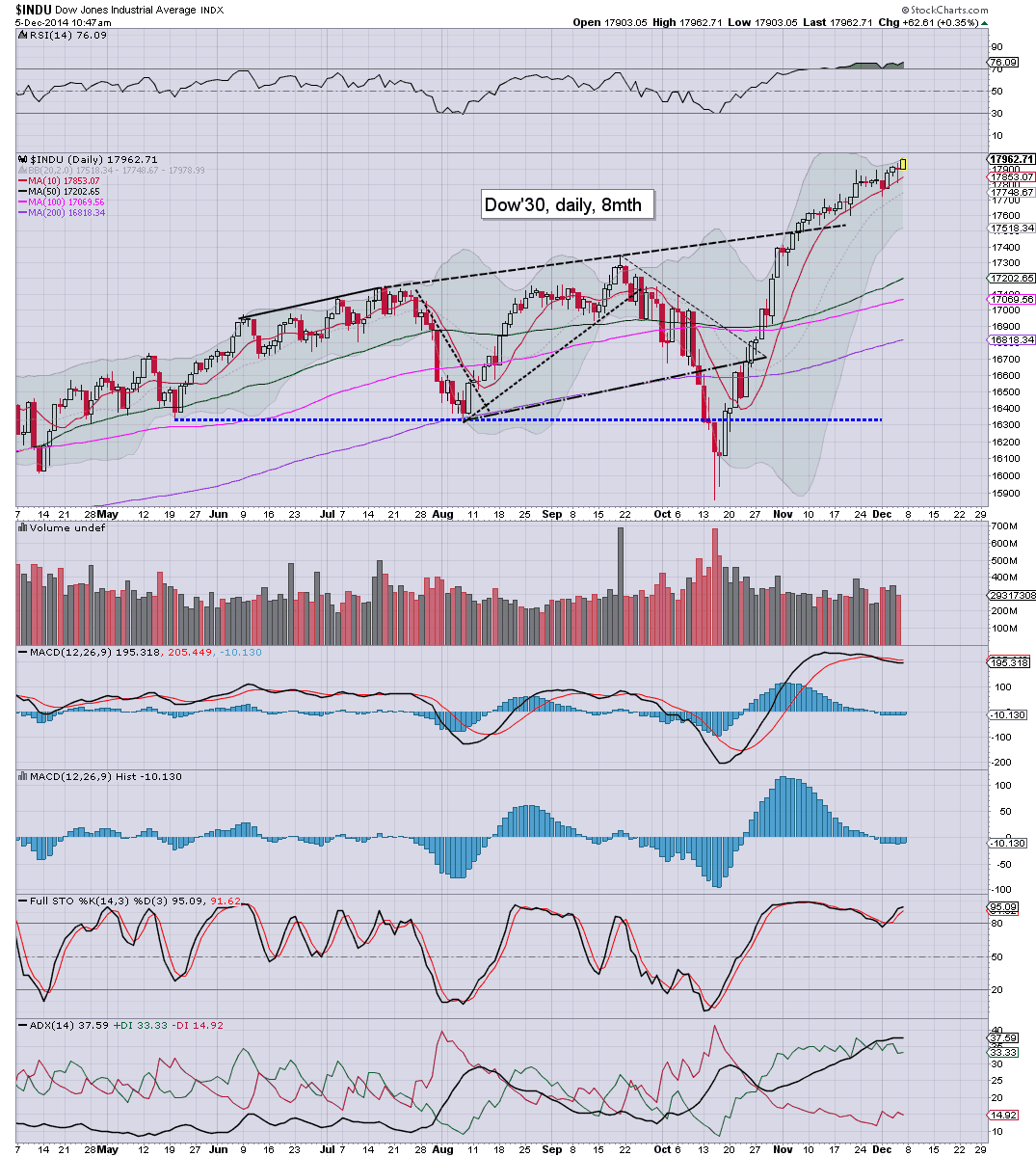 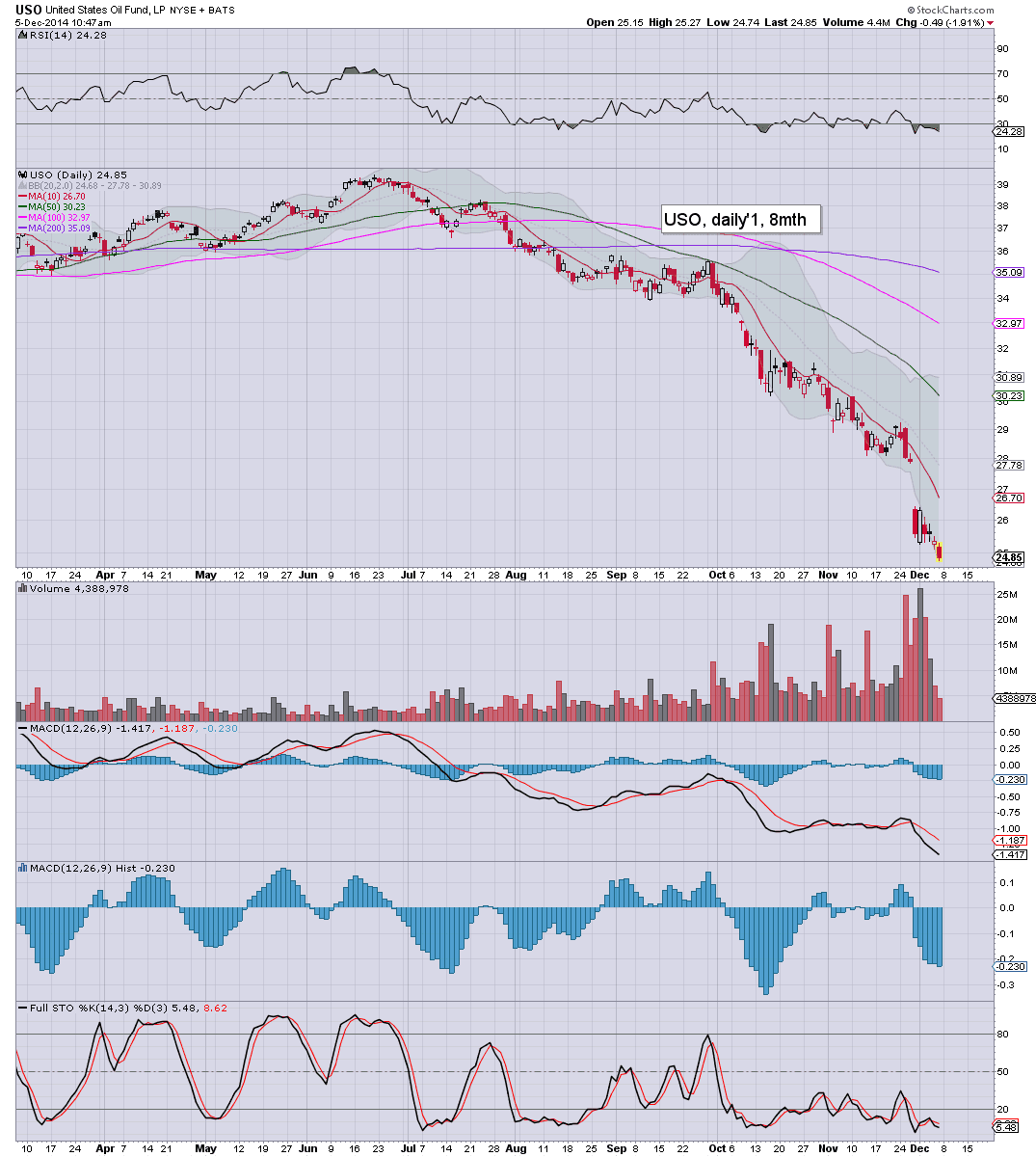 Weakness in the metals and oil is to be expected.. not least with the strong USD.

There should be some good video from Orion... enjoy the landing

11.32am.. .. and that is how you land on Earth..!
Posted by Trading Sunset at 15:49:00
Email ThisBlogThis!Share to TwitterShare to FacebookShare to Pinterest

With net job gains of 321k, the market opens a little higher, with another marginal new high for the Dow of 17947. Opening hourly candles though are warning of a possible reversal. Metals and Oil are both significantly lower, as the USD breaks the 2009 high of 89.11. 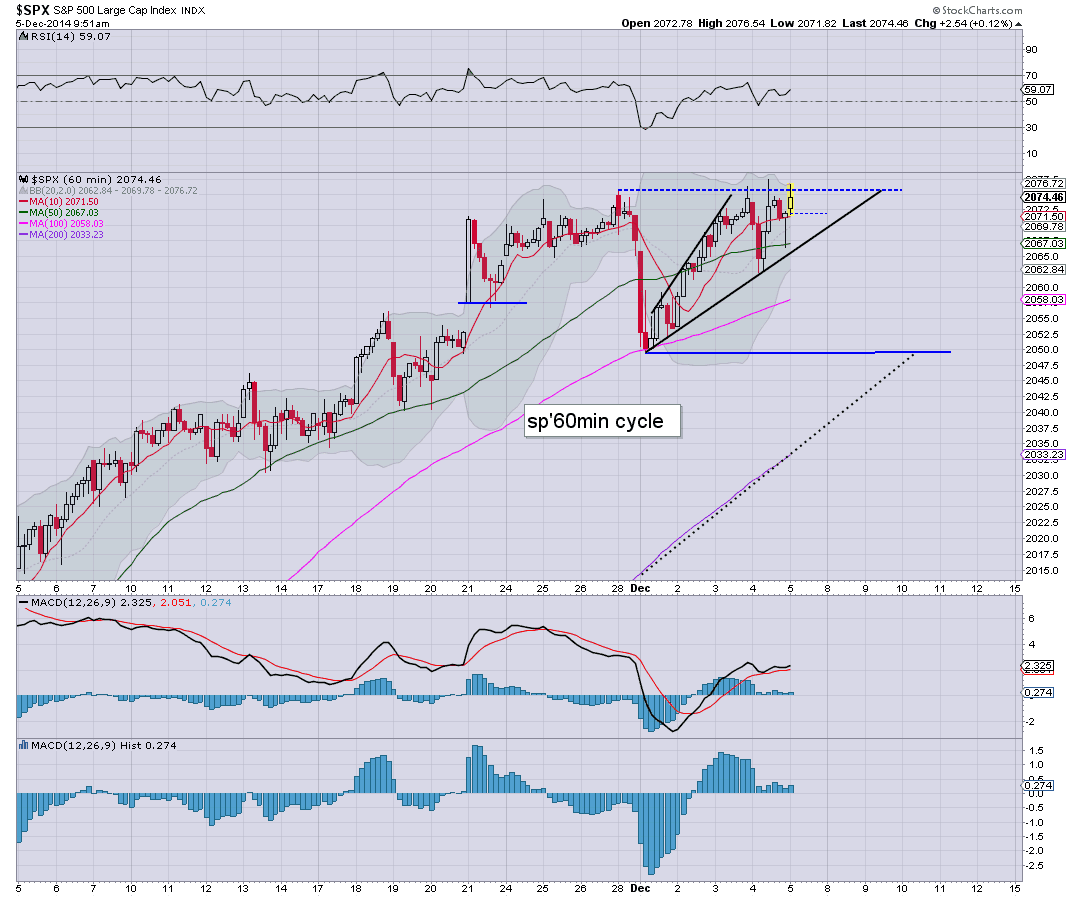 ...just back from a minor retail excursion... and there is indeed a great deal going on already.

Most notable action of all... the USD, at a new FIVE year high of 89.35. This dollar strength is exceptionally bearish for commodities, esp' the precious metals and Oil. Without getting lost in any talk of a 'retrace'.... the broader economic outlook remains 'okay' for another year.

This bubble ain't blowing up any time soon, is it? Just consider what happens to equities if the ECB can start buying bonds.
--

Whilst the Orion module (via Delta 4 heavy rocket) has managed to roar off the pad this morning at 7.05am EST, equity futures are a touch higher, sp +2pts, we're set to open at 2073. Metals are weak, Gold -$8. 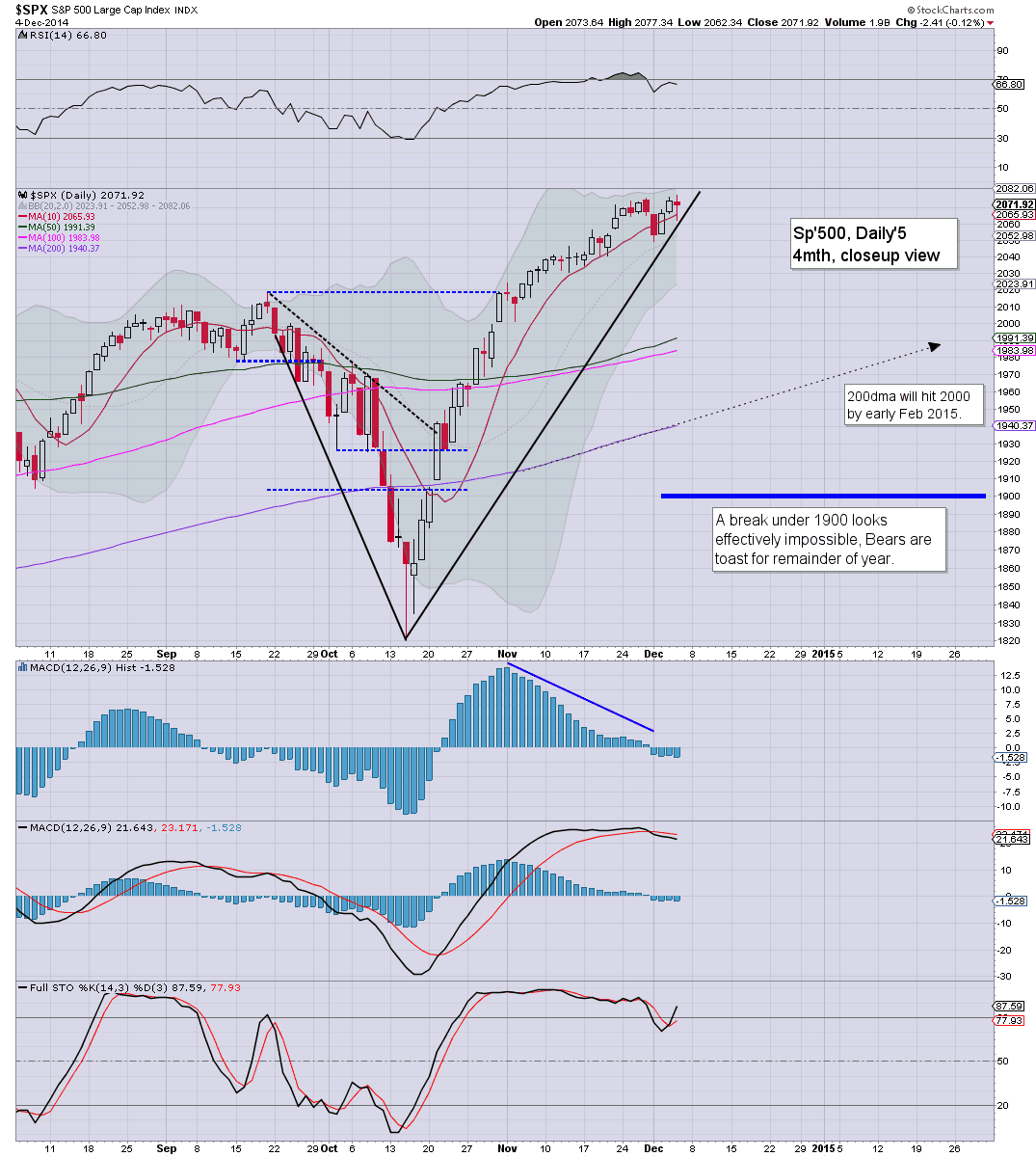 A great morning for all those at NASA, but also, for anyone who thinks we should eventually expand beyond this rock. I dare suggest it doesn't get any more bullish.
---

As for the market... well, we've the jobs data at 8.30am... market will probably get the 'Goldilocks' number that it wants to end the year.
--

Whether it comes from the insane 'everything is fine' cheerleaders on clown finance TV.. or the relentless 'crash-calling' doomer bloggers, it should be asked, are most comments worth anything? So few market commentators seem able to accept what is currently going on 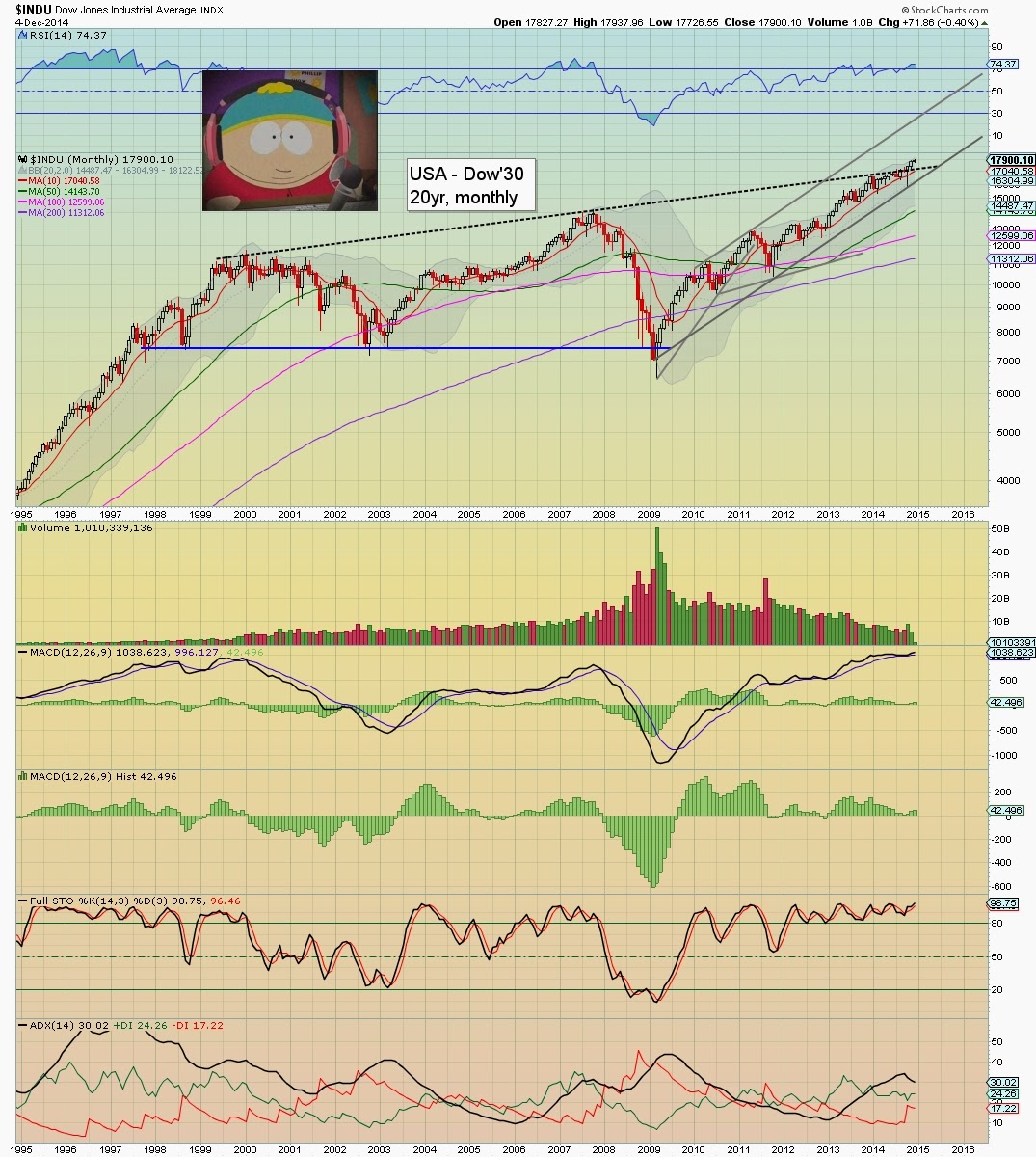 Whilst watching the most recent episode of South Park today (if you get upset at that show, then you should stop reading about........ now), the whole issue of 'comments' really struck me.

We do indeed live in a world that is now hugely obsessed with what others are saying. Not just the usual Government leaders.. or even talentless celebrities (yeah, I'm thinking of you, Kim K') but almost anyone who has the ability to string a few words together. Ohh, and yes, I do recognise the irony in that I'm commenting on this.

Yet.. here we are.. almost another year complete... and I see so many around me, seemingly having lost almost all perspective.

Without question, I know I have annoyed a fair few of my viewership across this year. After all, I'm not regularly touting 'omg.. we're going to crash!'.

I could reel off some names.. and indeed I shall..... Daneric (Mr 5 waves himself).. then there is deflationland.. where all charts lead to sp'1000. Tim Knight is still around of course, and generally on the short side, but somehow not bankrupt (how is that possible with typically 100/150 shorts?).

Then there is the semi-mainstream Karl Denniger of Market Ticker, who appears in outright denial about what is going on, just look at that header pic....


Denniger would make for a great case study... not least in his bizarre optimism that Americans might still... somehow magically change course. How the hell is that possible, when so few could even explain what the Federal Reserve is?

No doubt the relentless calls for imminent doom are far more attractive to many out there.. rather than reading that 'the trend is still broadly higher'. I'll be damned if I'll start going the route of touting doom, merely to keep all of my audience.

Friday will see an array of key data... not least the monthly jobs data. Market is seeking net gains of 230k, with a static headline jobless rate of 5.8%. Considering everything, those targets don't look overly bold, and it'd not surprise me to see a down tick to 5.7 or even 5.6.

*two fed officials are speaking, but I don't believe either will be of importance.
--

To be clear, I do think many have 'something good to offer', and that certainly includes deflationland, Knight, Denniger, and even Mr 5 waves. From what I know, all seem genuine 'nice' people, however, I can't help but think all of them remain largely in denial about what is ongoing, and likely ahead. As I often say 'go stare at a monthly chart', but I realise... few ever take me up on that suggestion.

ps. Yes, I made that Cartman gif, from last night's episode #Rehash
Posted by Trading Sunset at 04:00:00
Email ThisBlogThis!Share to TwitterShare to FacebookShare to Pinterest

Despite opening moderately weak, the equity bulls still managed another pair of historic index highs - sp'2077, and Dow 17937. The broader trend is still very much asserting itself... with Dow 18000s, and sp'2100s seemingly a given. VIX continues to cool. 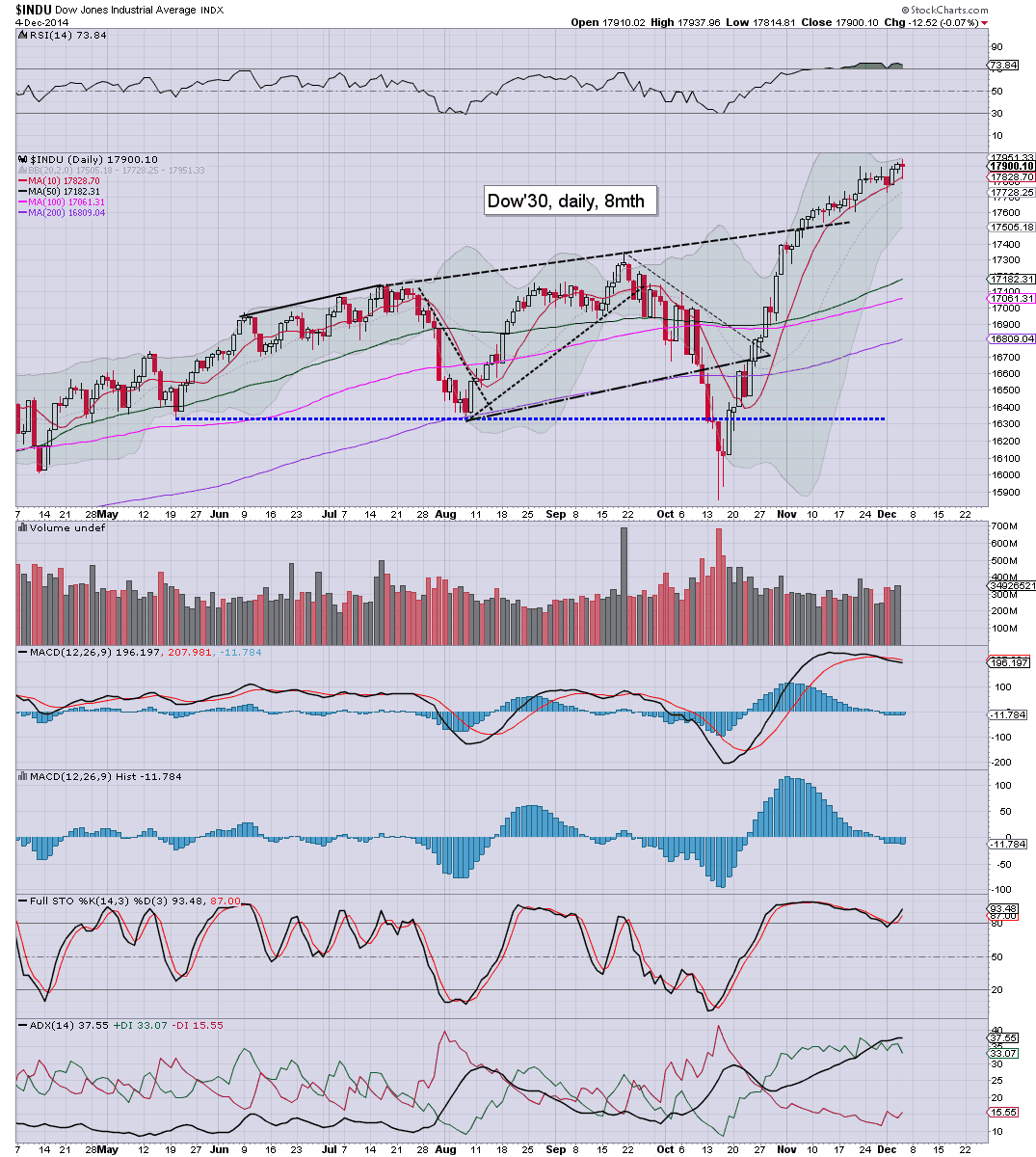 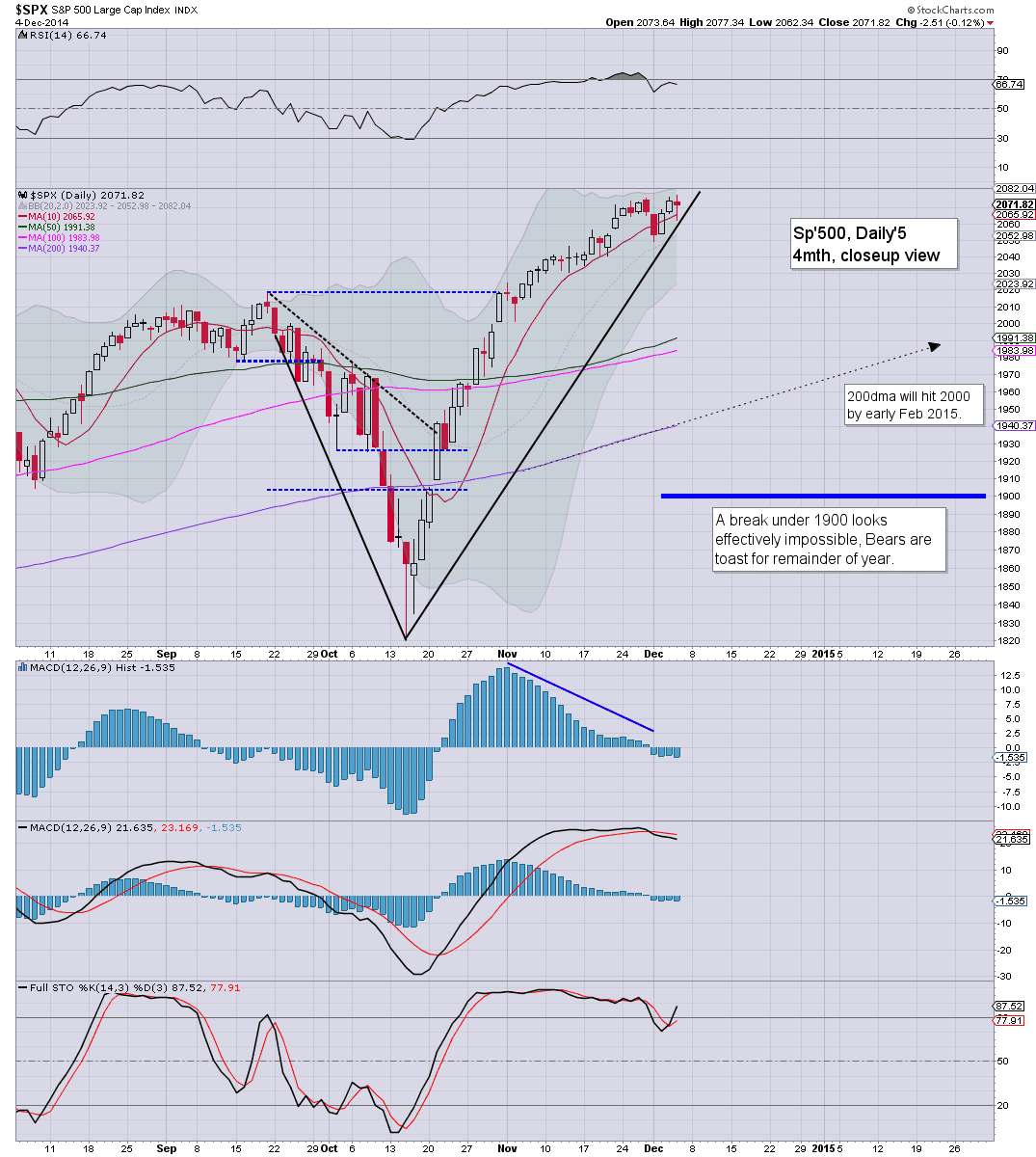 Equity bears are still sporadically being teased with very minor intraday drops... only to swiftly reverse.

For those few doomer bears who are still out there... today was truly tiresome, and this is clearly no market to be meddling in.. at least on the short side. The third consecutive daily decline for the VIX, and a weekly close in the 11s is probable, if Mr Market deems the monthly jobs data as a 'Goldilocks' number.
--
Closing update from Riley