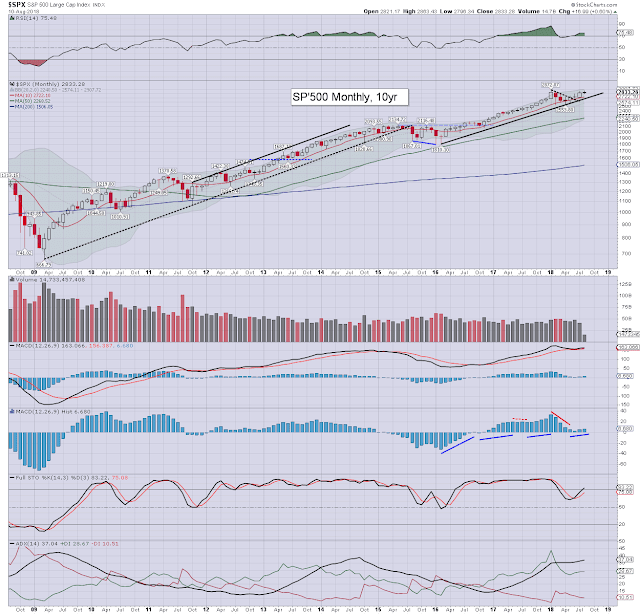 The sp' broke a new multi-month high of 2863, but settled net lower for the week by -0.25% to 2830. The s/t outlook offers cooling to the 2760s, before resuming upward. More broadly, the m/t trend from early 2016 remains strong. Note underlying macd (blue bar histogram) cycle, currently ticking upward for a second month. Further, note the key 10MA at 2722.

Big target remains the 2950/3047 zone, where there will be multiple aspects of resistance. Whilst my original year end target was 3245, after the late Jan>early April price action, I would be surprised to see a break >3047 before year end. 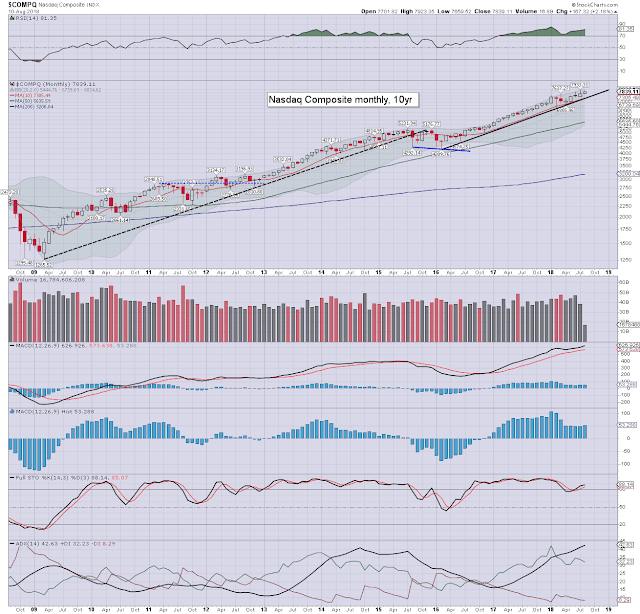 The Nasdaq settled the week +0.35% to 7839. The m/t trend remains powerfully bullish, as regardless of any s/t cooling, the 8000s look due, whether by late August... or not until September. 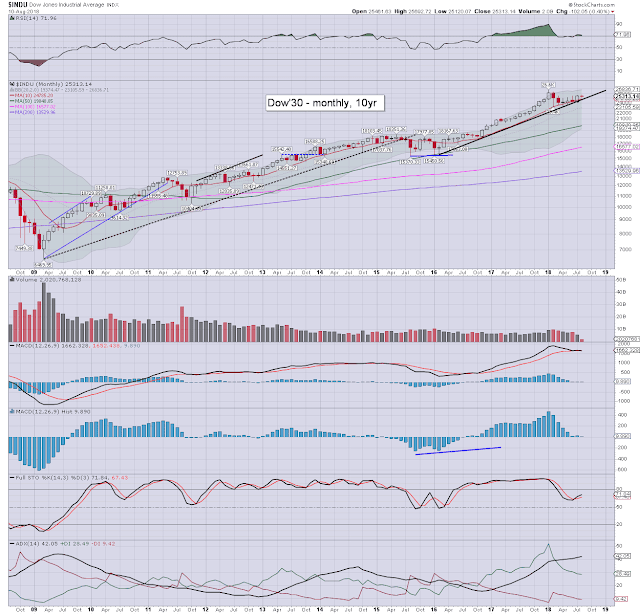 The mighty Dow broke a multi-month high of 25692, but settled the week net lower by -0.59% to 25313. Note upper monthly bollinger, which is currently offering new historic highs in the 26800s. The equity bears should be desperate for a monthly close under the key 10MA, currently at 24785. That does not look likely before October. 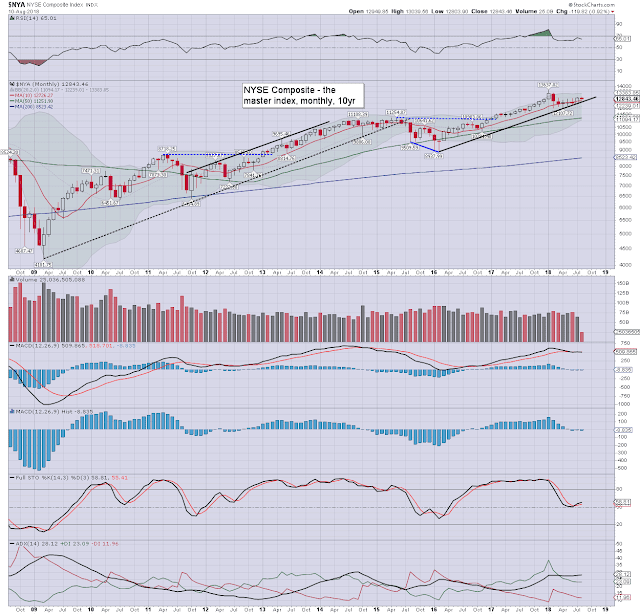 The master index was the laggard this week, with a net decline of -0.85%. More broadly, its very notable that price momentum seen via the macd (blue bar histogram) cycle has been fractionally negative for the past three months. It does merit as a 'mild concern'. 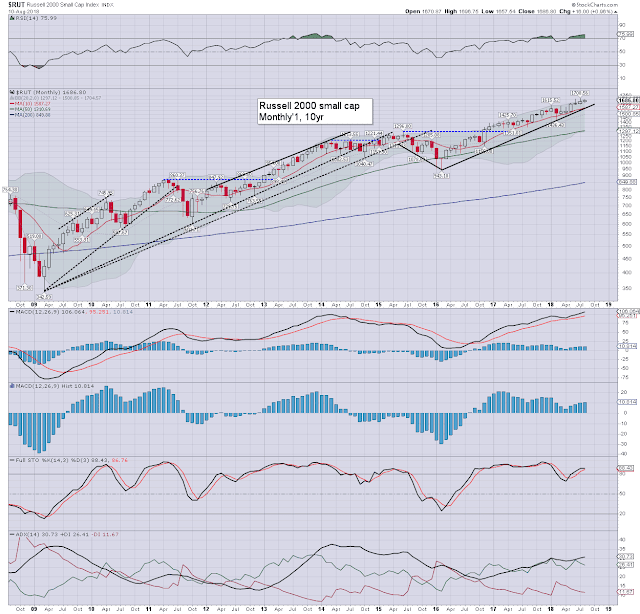 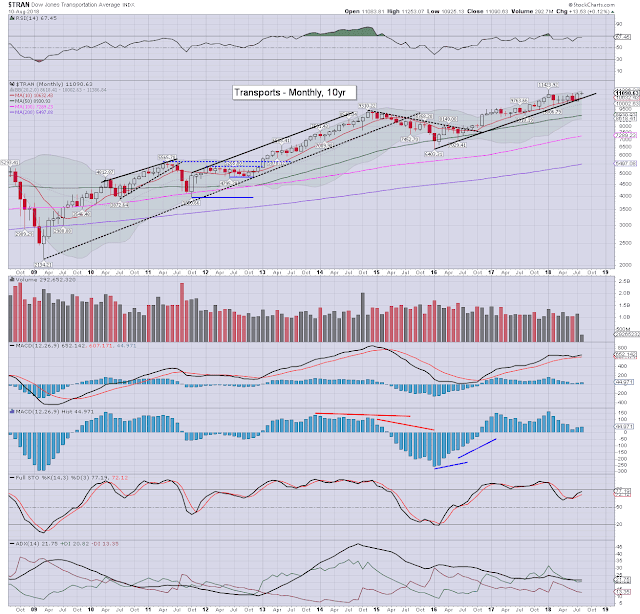 The 'old leader' broke a multi-month high of 11253, but settled net lower for the week by -0.06% to 11090. S/t bearish, with rather easy downside of around 3%. The tranny has been helped via a six week cooling wave in WTIC. Any renewed strength in oil - as seems due into late summer, will be a drag on the tranny, but that doesn't mean the index/sector will be net lower.
–

The Nasdaq comp' and the R2K were notably strong, whilst the Dow and nyse comp' were the laggards.

The s/t outlook offers cooling of 2-3%, but the m/t trend is unquestionably bullish, with a series of higher highs and higher lows. 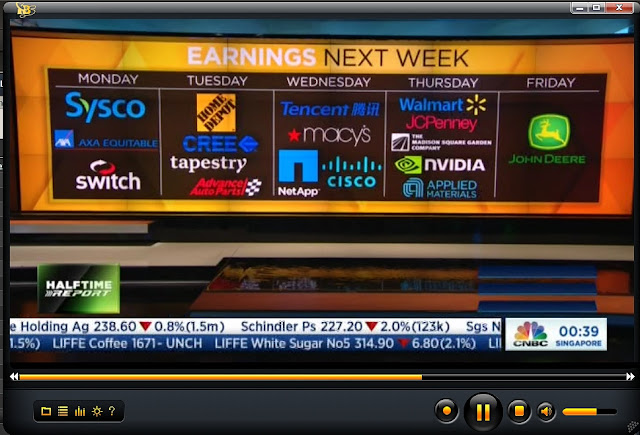 Thursday Aug'16th will be open day at http://subscriber.permabeardoomster.com, and for you non-subscribers out there, it will give you a good opportunity to see what I offer. First post will appear by 8.30am EDT.