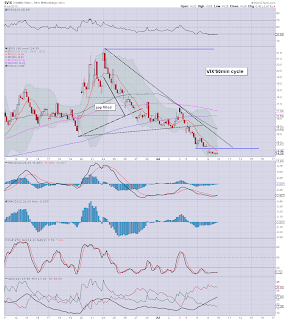 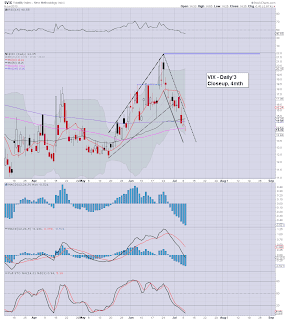 The VIX has now lost over a third, in just 11 trading days.

The big 20 threshold now looks a very long way up, and it doesn't look likely to be hit any time soon, certainly not before mid August, but perhaps way into September.

The hourly VIX/index charts are offering a small move in the bears favour, perhaps across late Wed/Thursday, but bigger picture remains in favour of equity bulls.

For the bears out there, its a market to avoid, and just observe. 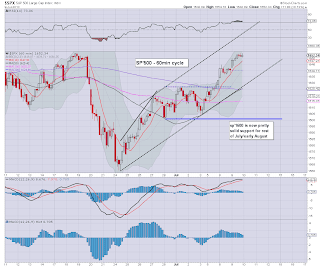 Another day for the bulls to revel in this twisted QE-fuelled market.

There is simply no reason for the bears to be part of  this.

Even the threat of moderate downside - post FOMC minutes (Wed' 2pm), is arguably nothing to be trading on.

*I remain content to be on the sidelines.
Posted by Trading Sunset at 21:02:00
Email ThisBlogThis!Share to TwitterShare to FacebookShare to Pinterest

3pm update - melt into the close?

The main market is holding comfortably in the sp'1650s. Bulls should aim to break the June'18 high of 1654. Anything over that, arguably makes the 1700s a given by early August. Bears remain obliterated, with the VIX set to lose the 14s. 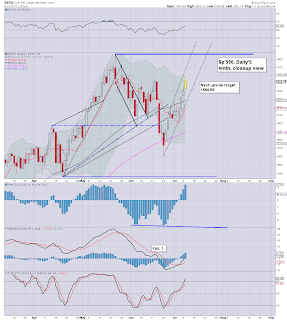 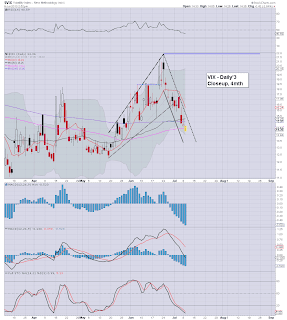 Considering another QE is scheduled for tomorrow, you'd have to expect the algo-bots will want to front run it.

No reason why we won't at least hold flat, or even climb into the close.

After relative weakness, Oil is melting higher, now up almost 1%

I would guess the bots will manage to spike through this.
Posted by Trading Sunset at 19:54:00
Email ThisBlogThis!Share to TwitterShare to FacebookShare to Pinterest

The market is holding gains for the fourth consecutive day, with the sp' in the 1650s. The June'18th high of 1654 looks set to be taken out either late today, or sometime tomorrow - when there is another mid-size QE of $3bn. 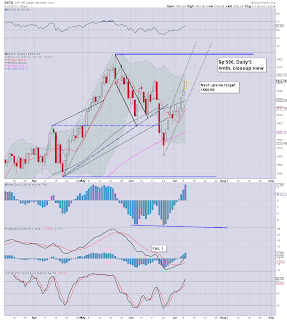 One minor surprise is how weak Oil appears to be, although I guess it might just be price consolidation after the break through the big $100 level.
--

*I remain more than content to sit on the sidelines. 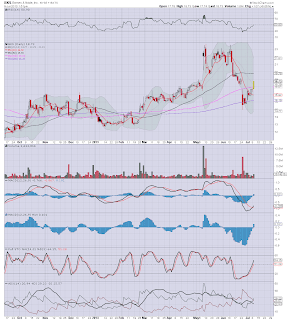 It would seem the CEO just got the boot, and the stock is continuing its daily up cycle. That only leaves the rest of the incompetent board members still to go.

Despite the price ramp..the company continues to lose money on EVERY book sold. Clearly, capitalism at its finest.
Posted by Trading Sunset at 18:53:00
Email ThisBlogThis!Share to TwitterShare to FacebookShare to Pinterest

For the bears, this is unquestionably a nasty market. The bears were again teased this morning with a swift..but oh so brief 6/7pt drop from the opening high. Primary trend remains...UP, and the sp'1700s look a given by early August. VIX can barely hold the 14s, and 12s look viable within a week or two. 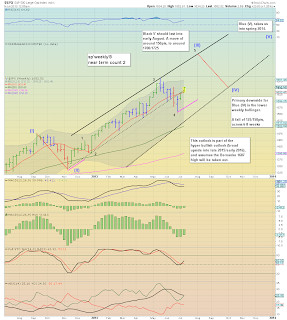 All is well at the worlds most rigged casino...and its an almost entirely FEARLESS casino.

back later
Posted by Trading Sunset at 17:57:00
Email ThisBlogThis!Share to TwitterShare to FacebookShare to Pinterest

The main US market is in relentless QE melt mode, with the sp' comfortably holding the low sp'1650s. The May'22 high of 1687 is now a mere 2% away, That looks set to be broken, but more likely after some consolidation. VIX is struggling to hold the low 14s. 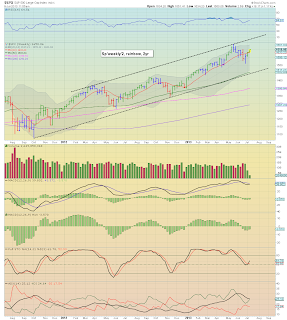 *the above chart is a simple one, strip away any numbers, and purely focus on the price structure. We ain't headed down, are we?

There is little to note, other than the bulls are in absolute full control.

I continue to see some who are touting this as merely a wave'2 bounce - after the recent 1687-1560 decline.

Err, no, considering the weekly charts, this is no wave'2, its a straight up ramp. Whether you want to call it a 'final wave'5'..or whatever, we look set to be breaking the sp'1700s soon enough.

Anyone currently shorting into the current rally, is arguably nothing less than a maniac. The fact there is another mid-size QE tomorrow..only adds to the problems the bears face.
Posted by Trading Sunset at 16:58:00
Email ThisBlogThis!Share to TwitterShare to FacebookShare to Pinterest

A micro down cycle, but the market just bounces right back. Bears face persistant problems from the QE, a close in the 1650s looks pretty easy for the bulls. Metals are holding gains of around 1%, Oil is surprisingly weak, currently flat on the day. 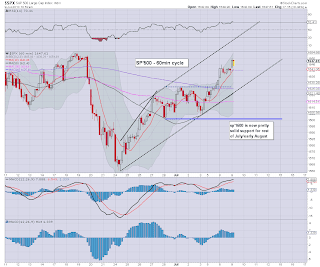 A slightly messy morning. Bears teased with a small 6pt drop..only to then see it all reverse within a few minutes.

From my pespective its this simple.

11.13am.. I've no idea why, but the Transports is exploding higher. 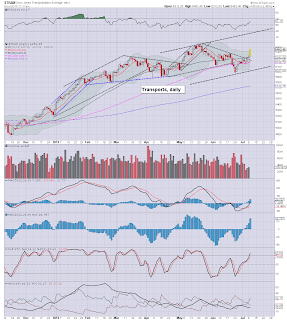 Thats a massively bullish move, and opens up the big 6600 level, which if hit..opens up 7000s..'fast'
Posted by Trading Sunset at 15:55:00
Email ThisBlogThis!Share to TwitterShare to FacebookShare to Pinterest

10am update - just another day higher

The US markets are once again on the rise, with the sp' making a play for the 1650s. Even worse for the bears, there is significant QE of around $3bn, and those 'benny bux' will be looking for a place to go this morning. 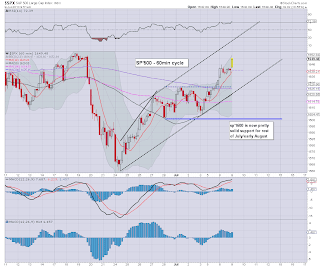 Hourly index charts are just too high, not that shorting this would either be a good idea.
Posted by Trading Sunset at 14:53:00
Email ThisBlogThis!Share to TwitterShare to FacebookShare to Pinterest

Good morning. Futures are (yet again) moderately higher, sp +6pts, we're set to open at 1646. Precious metals are showing similar strength, whilst Oil is again failing to participate, and is a touch weak. USD is slightly higher. 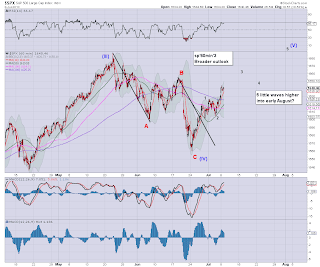 So, market is going to open higher again, and the 1650s are easily within range today.

Bears face a mid-size QE both today..and tomorrow. So, any intra-day weakness won't last for long.

What is clear, there is absolutely no point in attempting to re-short this today, tomorrow, and probably not until early August.
--

*I was looking to pick up an index-long block, but I won't chase it higher at current levels. Hourly charts are very high, and I'm content to just sit back and wait. At least I'm no longer on the short-side.
Posted by Trading Sunset at 13:21:00
Email ThisBlogThis!Share to TwitterShare to FacebookShare to Pinterest

It would appear US equities are just going to keep battling higher for some weeks.  A significant wave higher - at least into early August, seems very likely, and that will surely take the sp' into the 1700s. The only issue is whether there will be any significant downside at all later this year. 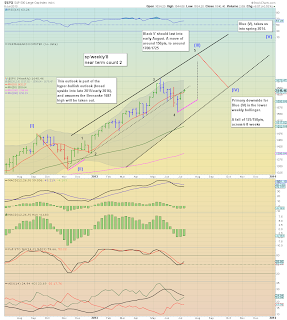 Another 8pts added to the sp'500, and we're already at 1640, a clear 90pts higher, in just ten trading days. Pretty incredible really, although its not like we've not seen this degree of rally already this year.

At the current rate, we will be in the mid 1700s by the end of this month. As it is, I'm sure we'll get some kind of sideways chop for a bit, with the 1700s far more likely in August, than July.


How high can this nonsense go? 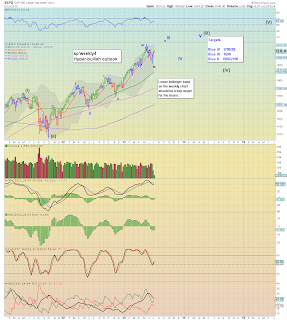 Of course, those latter target levels are currently in the 'crazy talk' realm, but then, just 2 years ago, who would have thought we would be comfortably trading in the sp'1600s?

What does seem clear, from a pure price formation, the recent downside from May'22, has produced a very large bull flag. Based on the previous flags, there is little reason why we won't rally at least into August, if not for a few months further.

There is no real econ-data tomorrow of note. However, there is a mid-sized QE of around $3bn, that should be enough to keep the market propped up.

*I remain on the sidelines, but will be looking to pick up an index-long block early Tuesday. As things are, I don't expect to be launching any new index-shorts until August..at the earliest. 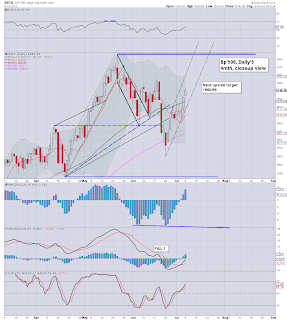 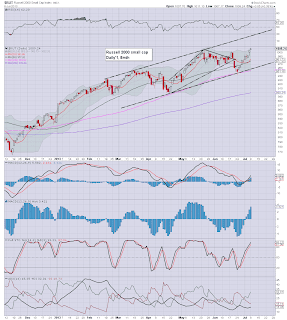 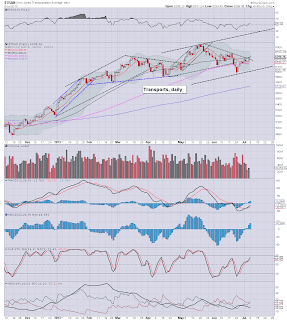 So, the market is broadly continuing the up trend since the sp'1560 low, from 10 trading days ago.

Unquestionably, the bulls are back in control, and with the weekly charts now also back to a broadly bullish formation, further gains seem likely this week, to sp'1650/60s.

The only issue appears to be, whether sp'1700s will be hit this month...or next.