Introduction to the fair value series

Its been my intention for some time to do a 'fair value' series for a wide variety of stocks. Yes, there are the crazy over-priced ones that many traders are fully aware of, but I also aim to get around to looking at...(wait for it)...under-priced stocks! Yes, even a permabear should look for under-valued (but high quality) stocks to purchase.

This first posting for the fair value series will be longer than subsequent ones, so that I can hopefully convey the underlying philosophy. Taken together, I believe fundamental + technical analysis are important for any trader. Clearly, this is just the start, and with more posts, hopefully the standard will develop to become something worthwhile.

Fair value is a concept I've been touting massively for a few years now. It has almost become a long time joke where if someone touted one of the momentum (momo) stocks (like NFLX, GMCR, AMZN), I'd just say 'divide by 10', and then give my 'fair value' price.

Dividing by 10 is admittedly overly harsh for even some of the very worse momo stocks, but the point stands, most of them were – and still are, grossly overvalued.


What is fair value?

Say you're an investor with $10,000. How many years do you want to endure before your investment provides a 100% gain. Lets not get into the sub issues of 'how' the returns are generated, whether by capital gain or via dividends. The issue is about return on investment.

Would a century be too long? Ohh, then I guess you don't much like stocks with a Price Earnings (PE) ratio of 100?

How about 15 years, does that seem like a reasonably good time frame to get a 100% return on your investment? Arguably, for most people, 15 years is a reasonable time frame.

Historically (and interestingly!), the PE for the US equity market is usually somewhere in the 10-15 range. During the bubble periods, ratios of 30, even low 40s have occurred. Similarly, a 'depression era' PE of 5 is also important to recognise.


Now, one final issue about PE ratios. There will of course be a range between different stock types during any given era, such as the following that I suggest we presently have...

*there have of course been some insane tech/social media IPOs in recent years where the PE is 1000/1500 or worse.

There are many other smaller issues about PE ratios. Most notably, there is no PE ratio of course is a company is losing money. Secondly, if a company is making a VERY small amount relative to number of shares, its possible we get bizarre PE ratios of 5000, or even higher.

The PE ratio is certainly not everything when considering a company, but contrary to what many have come to forget, it is still usually a great starting place.

Look at the Netflix chart. It had a superb run, truly amazing – justifiably based on massive revenue growth and ever increasing profits. Such near-exponential growth though could never last. Besides having to deal with the 2008 collapse wave, increasing competition (legal or otherwise), NFLX faced a number of problems – not least shooting itself in the foot via changing its price structure which really annoyed its unreliable customer base. 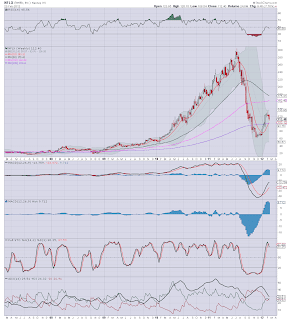 The point is that in a matter of just a few months, the once beloved NFLX became a horror story. No company, no matter how many cheerleaders on either of the financial clown channels it has, is immune to real world problems/corporate mistakes.

So where do we start with this retail behemoth? Current market cap of $82bn

*for some good details on AMZN's key numbers
see: http://finance.yahoo.com/q/ks?s=AMZN+Key+Statistics

Initial summary: The obvious problem is profit margins are razor thin, plenty of cash, debt is not a problem – and thus AMZN is at least not significantly exposed to any future rise in interest rates.


So, what would 'fair value' be for AMZN.

All other things being equal, lets take 3 scenarios.

First, the chosen PE ratios 15, 25, and 35. Why have I chosen these? I'm trying to take the more 'bullish' approach, and thus the eventual $ price levels are the minimum targets, rather than what might be the ultra doomish ones.

Frankly, being a permabear-doomster, I would be more inclined to look for PE's of 5, 10, 15. After all, if a company is regularly losing money, why would it not be slammed under PE'10?

15 is a good historic average for a stable and comfortably profitable company.
25 is a touch above the current market average, and considerably over the long term average of 15
35 is historically on the high end, even the most bullish cheerleaders would struggle to justify this.

If Scenario'A, then how could anyone justify a PE over 15?
If B', how could AMZN be justified to hold a PE of even 25 ?
If C', despite recovering profit margins, would AMZN really be justified PE'35 ? That would still be historically high for a stock – no matter how good the company.

With AMZN currently trading at $180 per share, what does that mean for a 'fair value' price?

The above uses the current PE of 131 as guidance. Lets also use the forward PE of 67– as projected for year end 2013.

So, let me state clearly, even under the 'bullish' scenario – where 'everything in the world is a-okay', AMZN should not be trading above $94. The $100 level is obviously a huge psychological support level for AMZN, so its kinda interesting that my own rough estimates fail to even support AMZN above this level.

Worse case for AMZN, are we really looking at AMZN in the 20s? From a chart/technical perspective, the old $40 level was a huge issue for AMZN.

One thing I will note at this point, is that of course there are so many variables, and at Q1 earnings, these 'fair value' targets would need to be re-assessed. However, based on historic data and standards, I believe the 3 ratios are very balanced, and in fact are overly fair to the bullish persuasion.

The absolute determining factor will be earnings of course. Can AMZN stabilise falling profit margins, or will it start posting increasingly large losses? Q1 earnings (due late April) will be fascinating to see. I certainly would not be surprised to see a minor loss. The market appears to be looking for another minor EPS profit of around 10 cents. 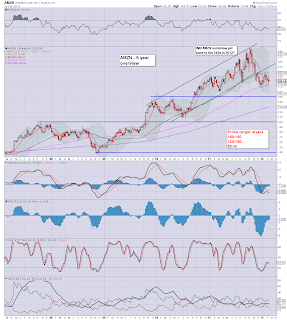 A secondary issue will of course be the wider equity/capital market mood. If the doomster wave'3 were to occur, then it'd seem likely that AMZN will at least test the big $100 level sometime this year. 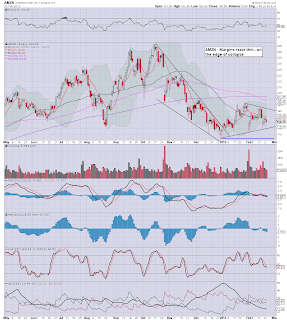 Let me end this first posting for this 'fair value' series, by noting that AMZN is clearly a superb company. Since its incorporation in 1994 it has managed to become one of the worlds leading online retailers, and has seized a huge amount of sales from the old brick & mortar retailers. It has near saturation brand recognition, and has become a very established corporation, and doubtless has a strong future ahead.

Yet, in the immediate term AMZN does face serious issues. Those profit margins are truly razor thin. With just a minor increase in its cost base (whether its through wage inflation, energy costs, taxation), the point stands - AMZN either starts to rapidly expand – with good growth in revenue and much higher profit margins (to around the 8/10% level), or my fair value target 'should' in theory be attained at some point within the next 6-18mths.


When you take into consideration the larger economy, the stage of the economic cycle we are in, and the various chart support/resistance levels:

AMZN: fair value: $95, with potential for downside to the permabear-doomster level of $40
Posted by Trading Sunset at 23:13:00
Email ThisBlogThis!Share to TwitterShare to FacebookShare to Pinterest
Newer Posts Older Posts Home
Subscribe to: Posts (Atom)