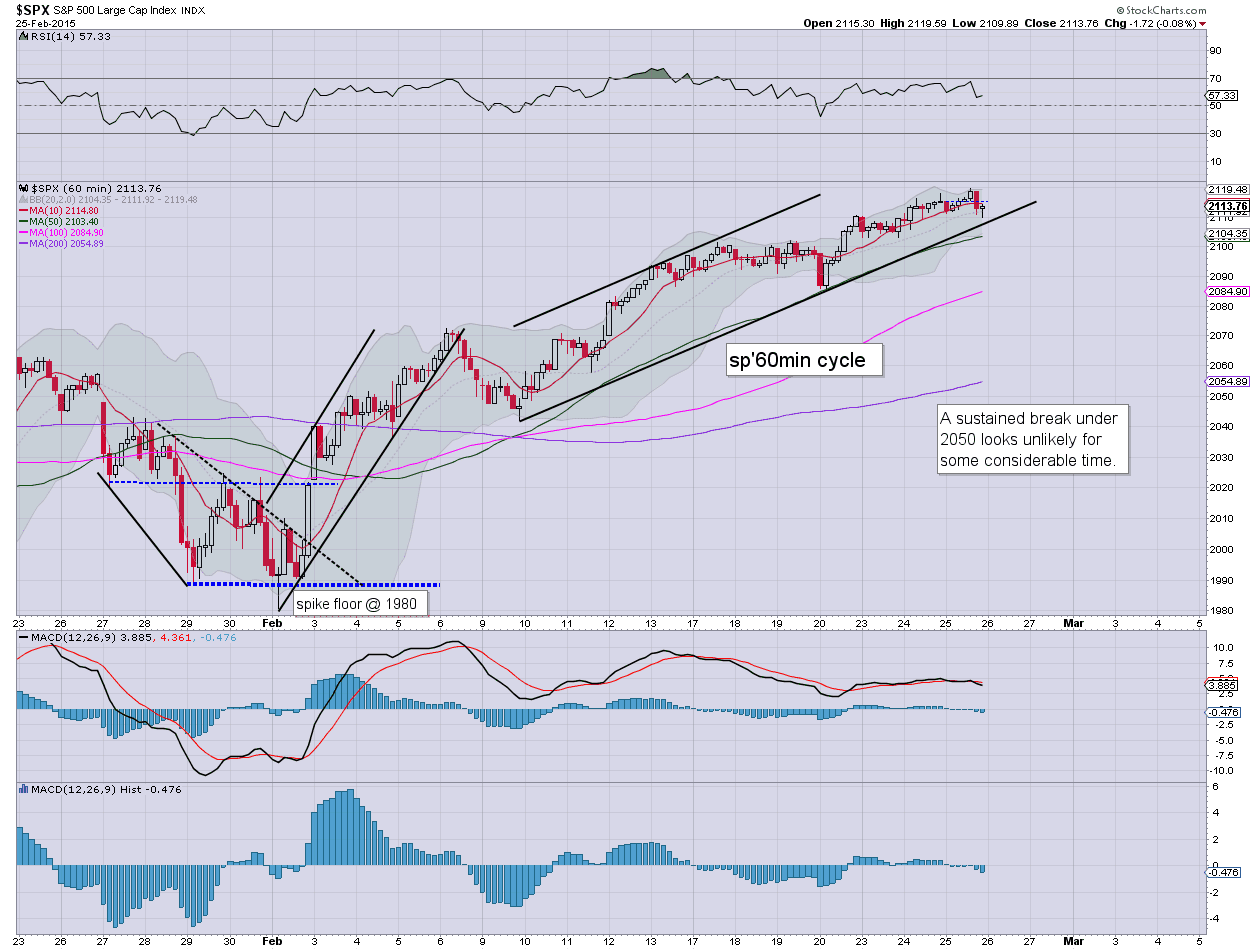 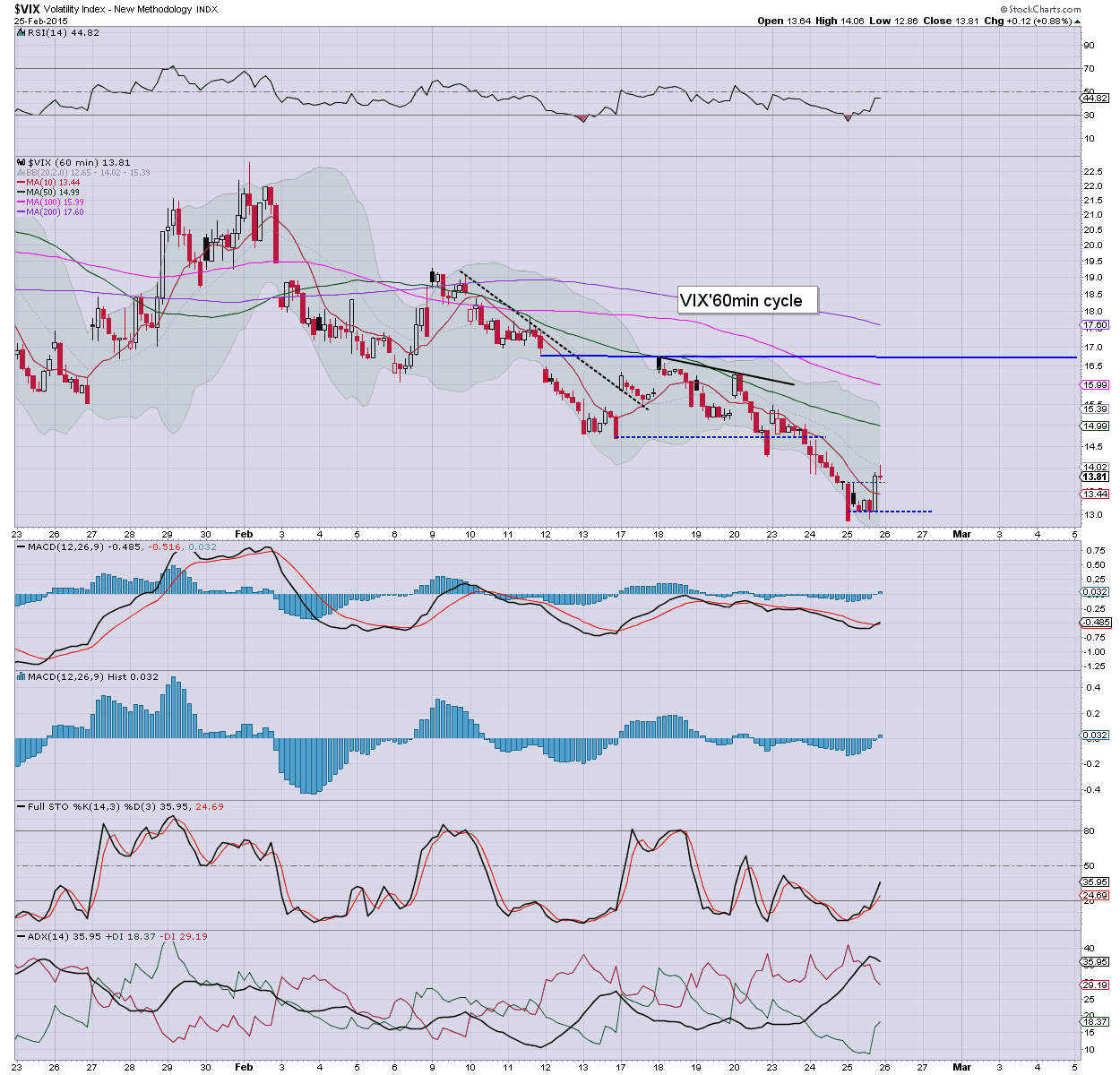 Suffice to say... pretty tedious day, but at least.. the Yellen is out of the way until the next FOMC meeting of March'18th.

Until we break under sp'2100, there still isn't any clarity that a moderate retrace is underway.

Daily wrap at 8pm
Posted by Trading Sunset at 21:01:00
Email ThisBlogThis!Share to TwitterShare to FacebookShare to Pinterest

US equities have turned a touch weak, having broken new historic highs a little earlier. Market is being lead lower by AAPL, having got stuck against the upper rising trend. Metals are holding minor gains, Gold +$3. Oil has built rather powerful gains of 3.7%, but is broadly flat on the week. 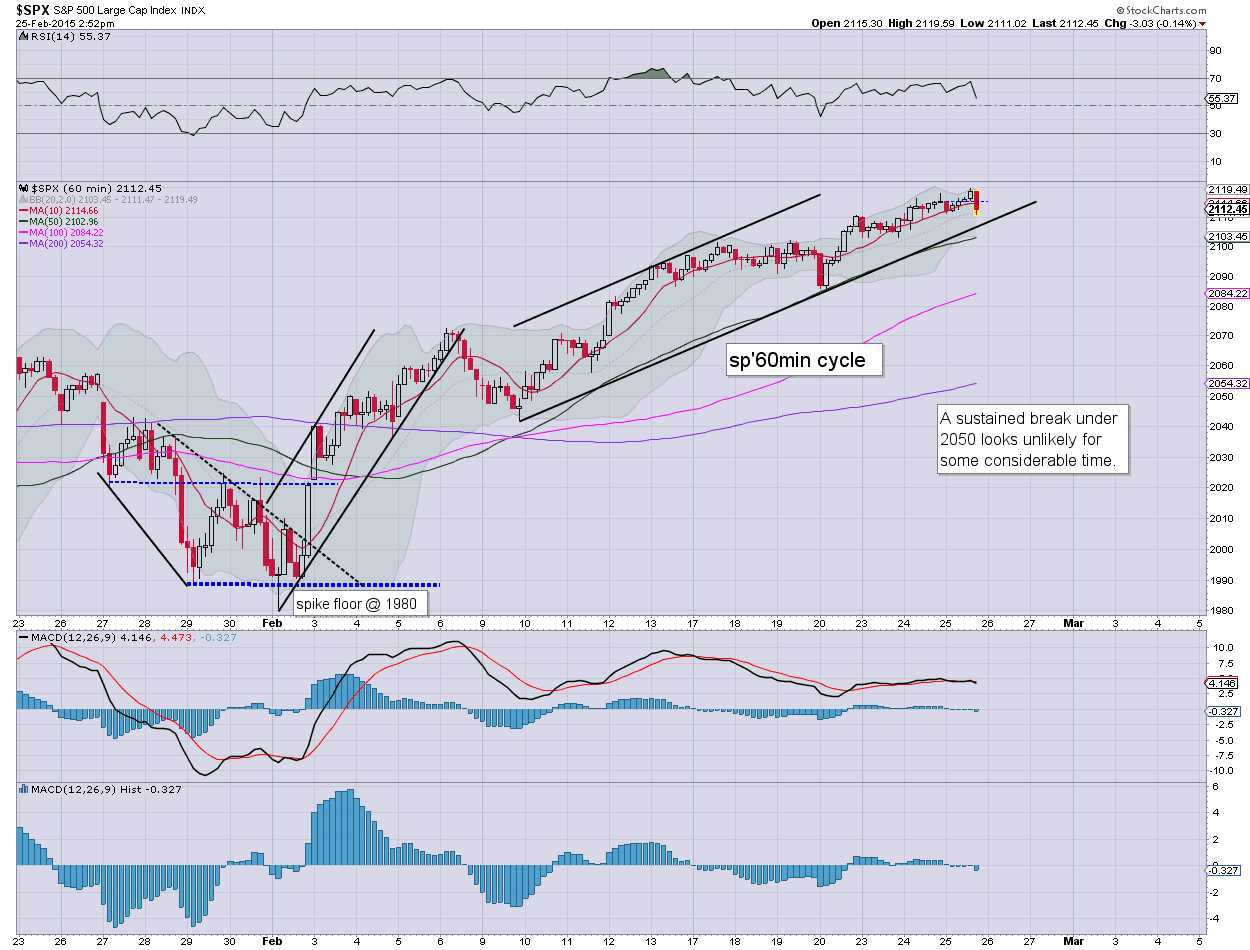 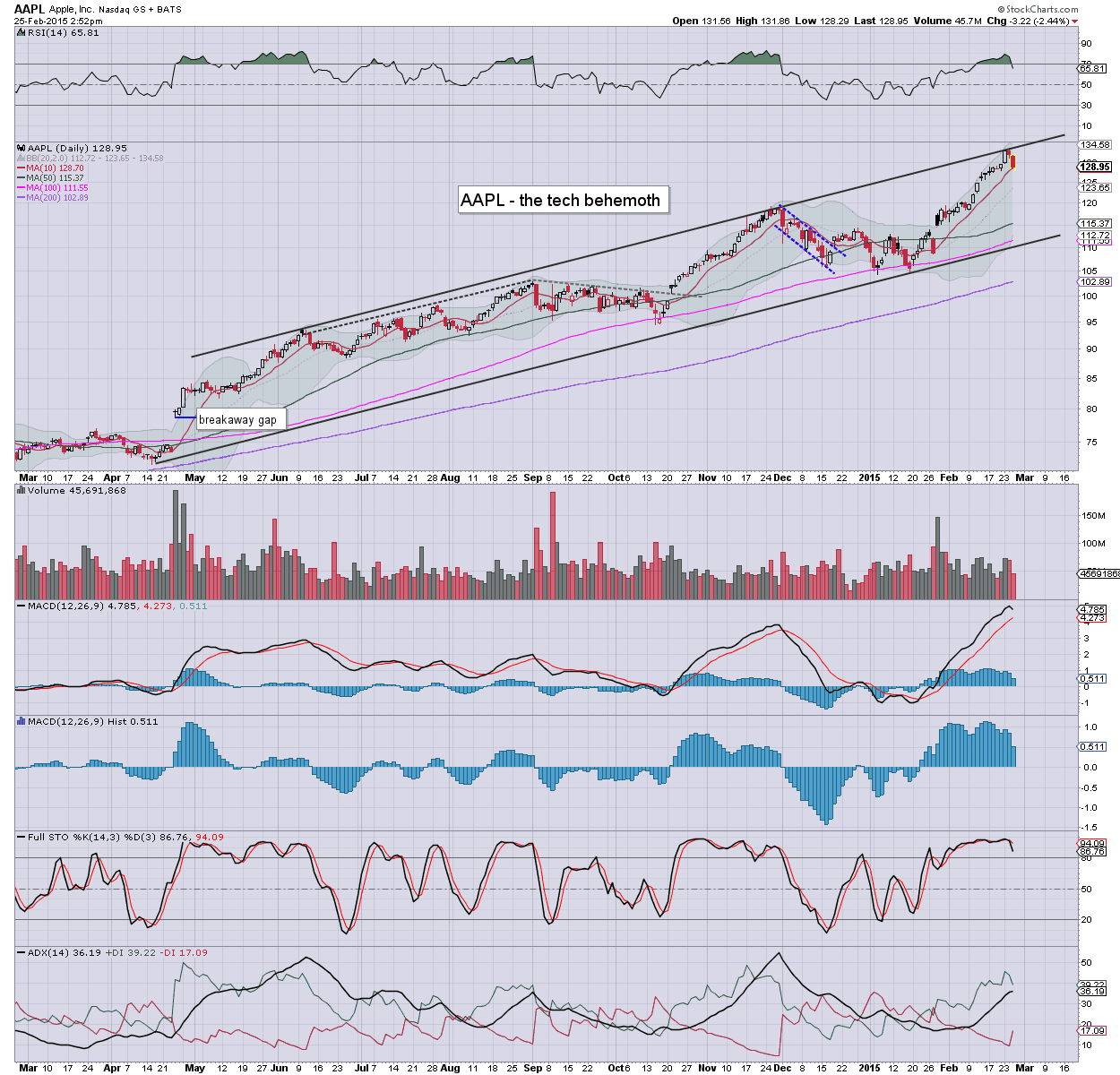 *I refer anyone to the 'fair value stocks' post on AAPL I did yesterday evening. I am certainly broadly bullish on AAPL, but its natural for a pull back to the 125/20 zone. The latter would likely equate to sp'2060/50s in early March.
--

Regardless, were I only looking at the AAPL, INTC, and HD charts, I'd say a minor correction is underway.. even on a day when the indexes have broken new highs.
-

*it is also notable that the VIX has turned positive, swinging from 12.86 to 13.90s. A daily close in the 14s would offer initial confirmation of an equity cycle top.
-

updates into the close... not least if we continue to slip lower.

A red Nasdaq close.... would be clearly a concern... do we move to crash alert yet?

Notable weakness: AAPL -2.8%.. seemingly headed for the low 120s.
Posted by Trading Sunset at 19:54:00
Email ThisBlogThis!Share to TwitterShare to FacebookShare to Pinterest

Mr Market hits another wheel barrow of short-stops, jumping to a new historic high of sp'2019. VIX is reflecting the absolute market confidence, -5% in the 12.90s. Metals are holding minor gains, Gold +$2, but looking vulnerable to closing red. Oil is higher by 2.4% 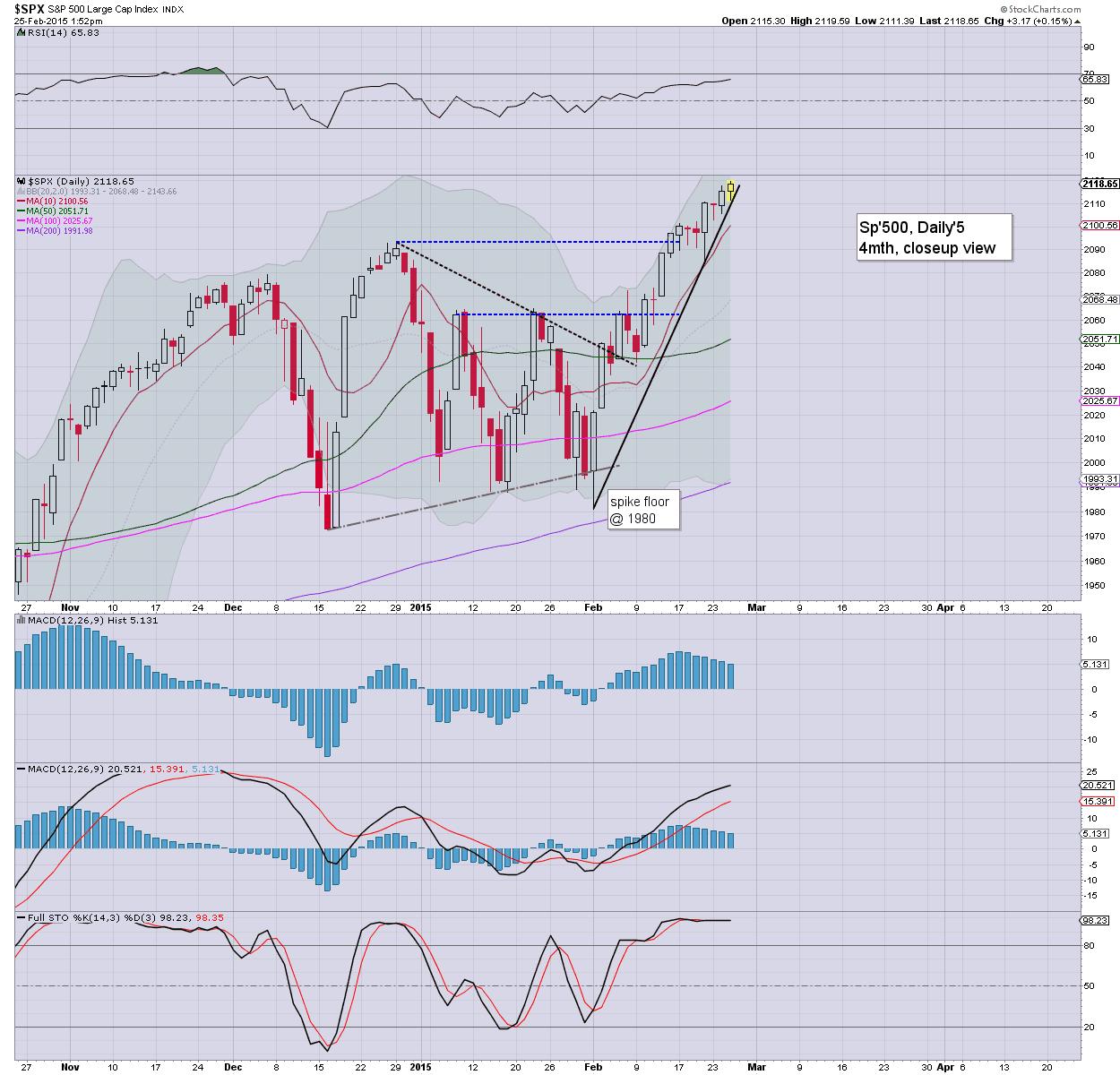 First key support remains the daily 10MA.... which itself is rising very fast.

US equities are in nano chop mode, with marginal new highs for some indexes. The Nasdaq comp' is higher for the 11th consecutive day... a mere 0.5% from hitting the giant 5k threshold. Metals are holding minor gains, Gold +$5. Oil has re-built gains of a somewhat significant 1.4%. 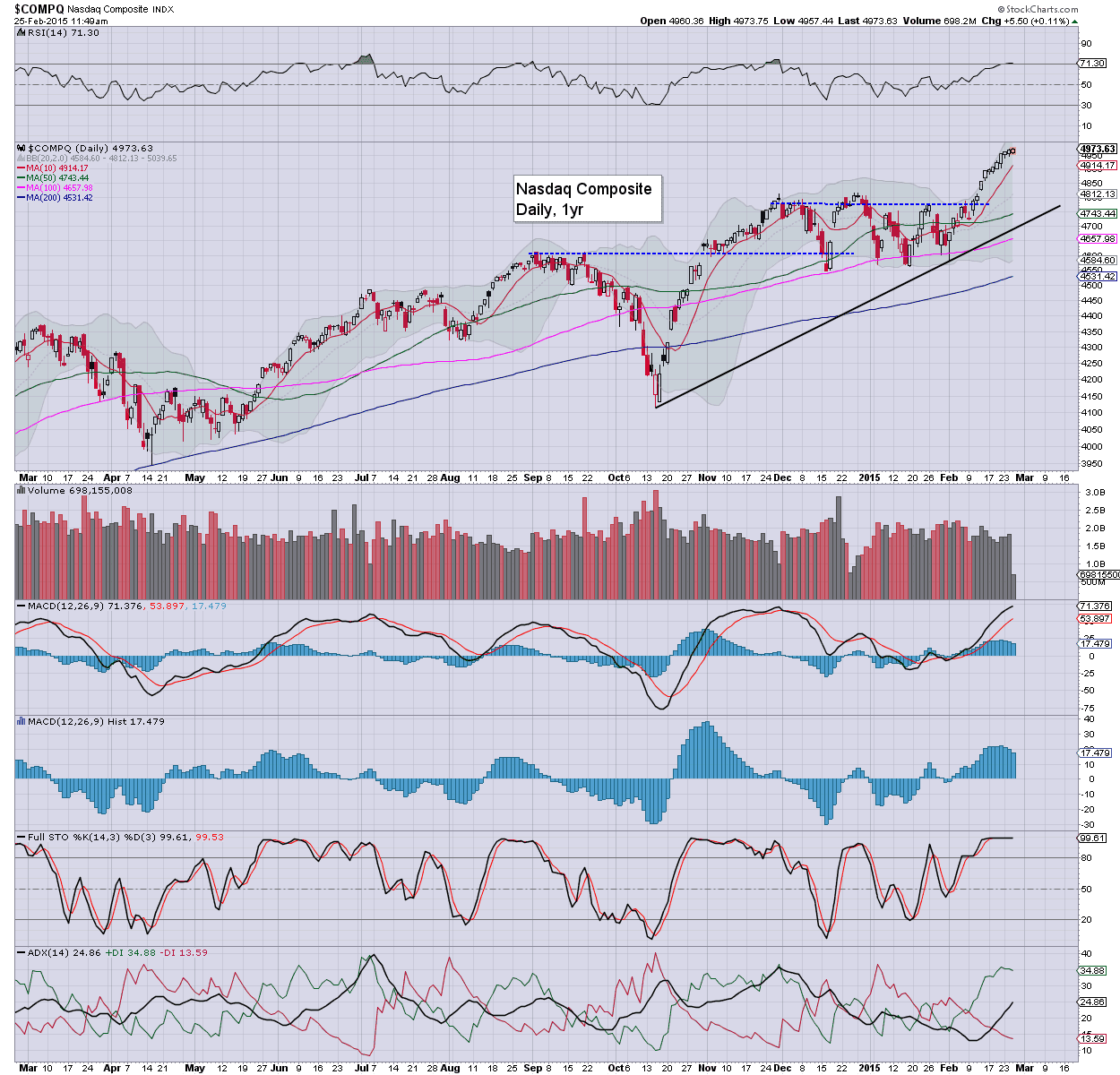 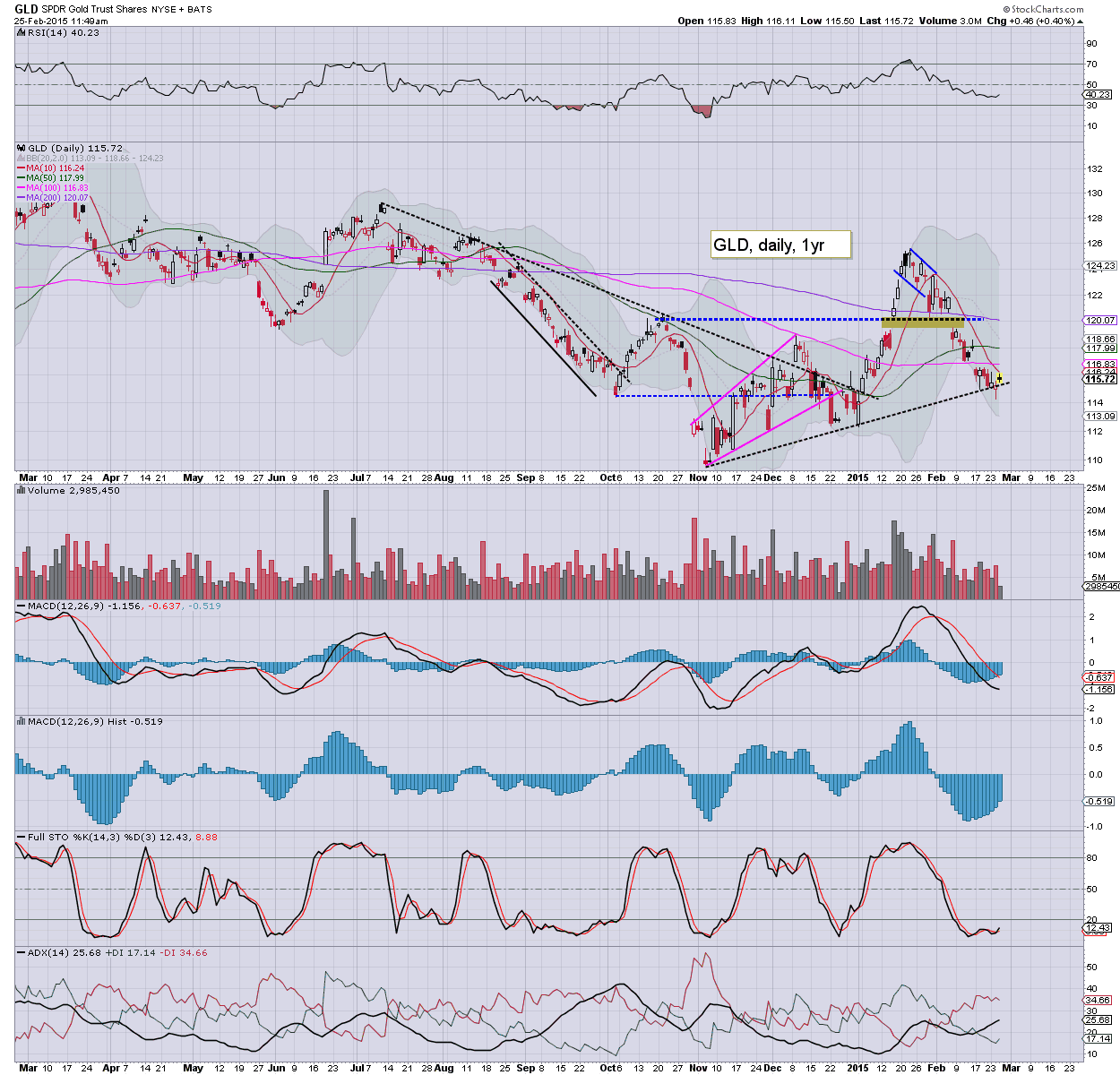 Aside from a few dynamic movers like HPQ and CHK.. it is simply another day of tedious algo-bot melt... to the upside.
-


--
time for lunch... back at 2pm
Posted by Trading Sunset at 16:50:00
Email ThisBlogThis!Share to TwitterShare to FacebookShare to Pinterest

As the Yellen continues to answer questions from intellectual giants such as Maxine Waters, the equity market remains in micro chop mode.. with some indexes already turning back positive. Gold is +$3.. but looks particularly weak. Oil is similarly weak, +0.1%... set to turn negative. 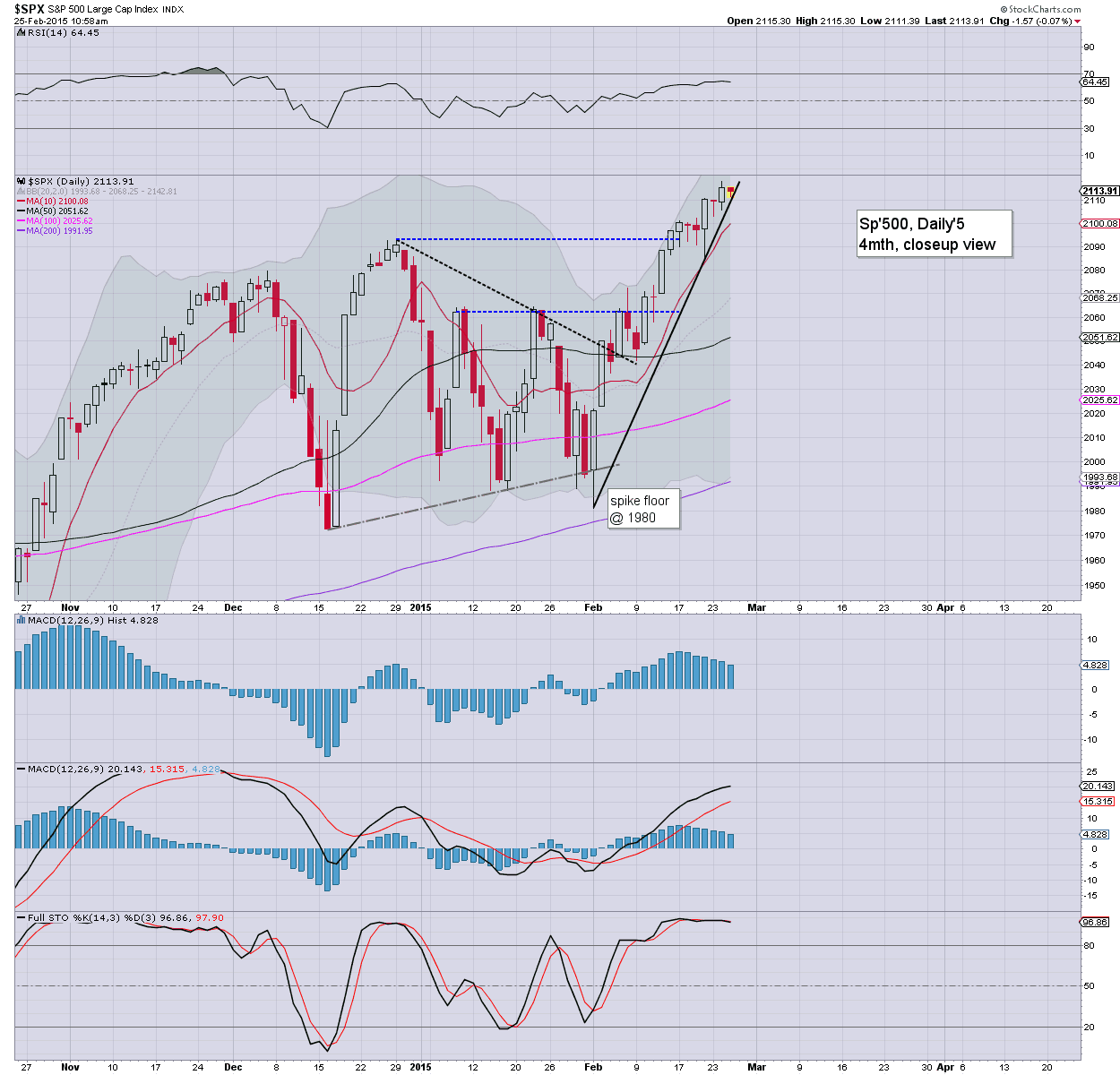 *the questioning from Waters remains utter train wreck TV. I'm fuzzy on exactly what district of the USA she is representing.. but really... I can only imagine what Yellen is thinking at times of those who question her.
-- 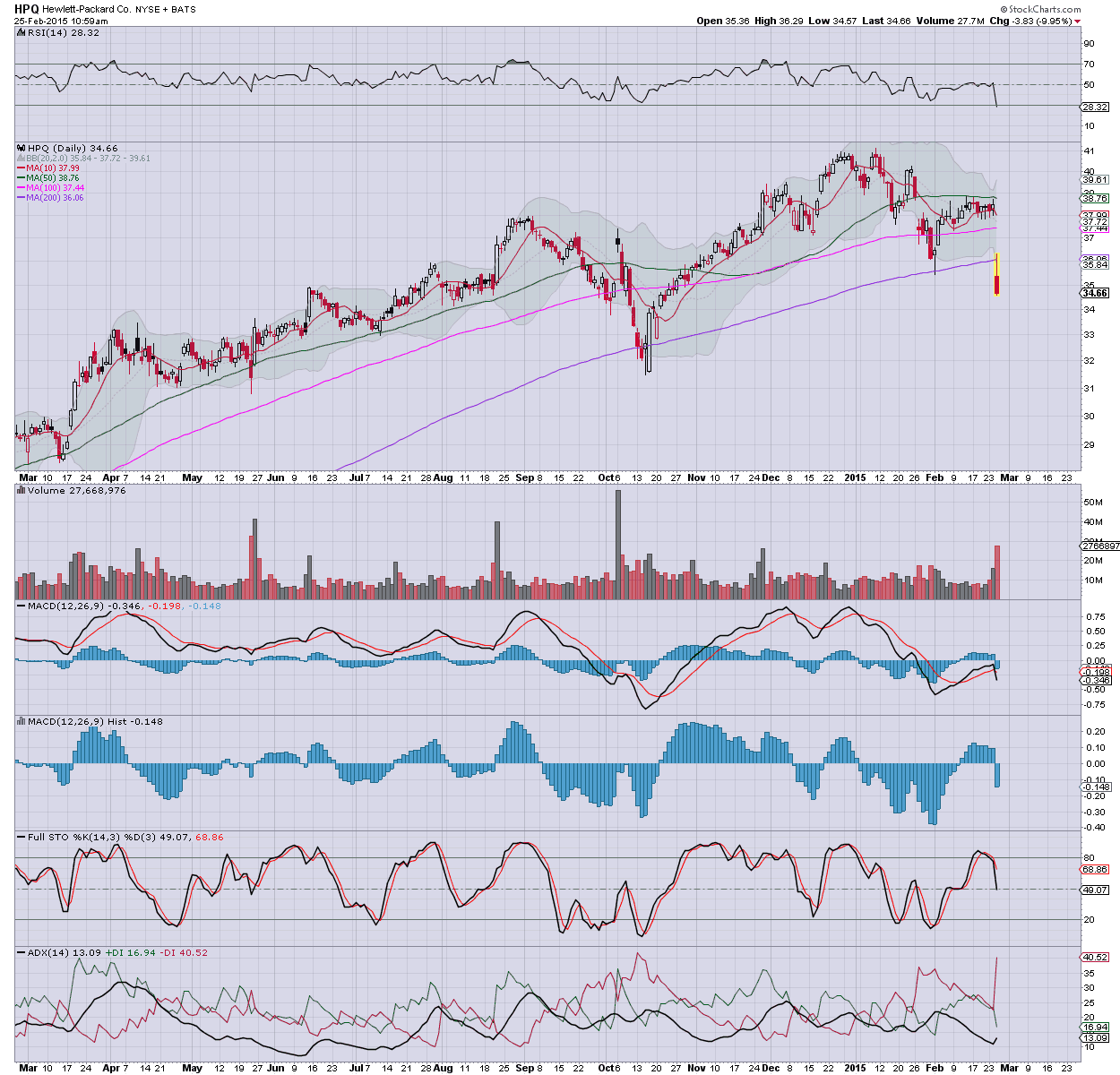 ... a loss of the key 200dma, as Mr Market mulls the longer term outlook for one of the 'once great' tech giants.
Posted by Trading Sunset at 15:59:00
Email ThisBlogThis!Share to TwitterShare to FacebookShare to Pinterest

10am update - time for more Yellen

US equities open a little lower, but until we're back under sp'2100.. it is nothing for the equity bears to even get moderately excited about. Yellen is set to address the US congress for the next 2-3 hrs, and Mr Market will be closely listening. Gold opens +$4, but looks set to turn red. Oil is similarly losing early gains. 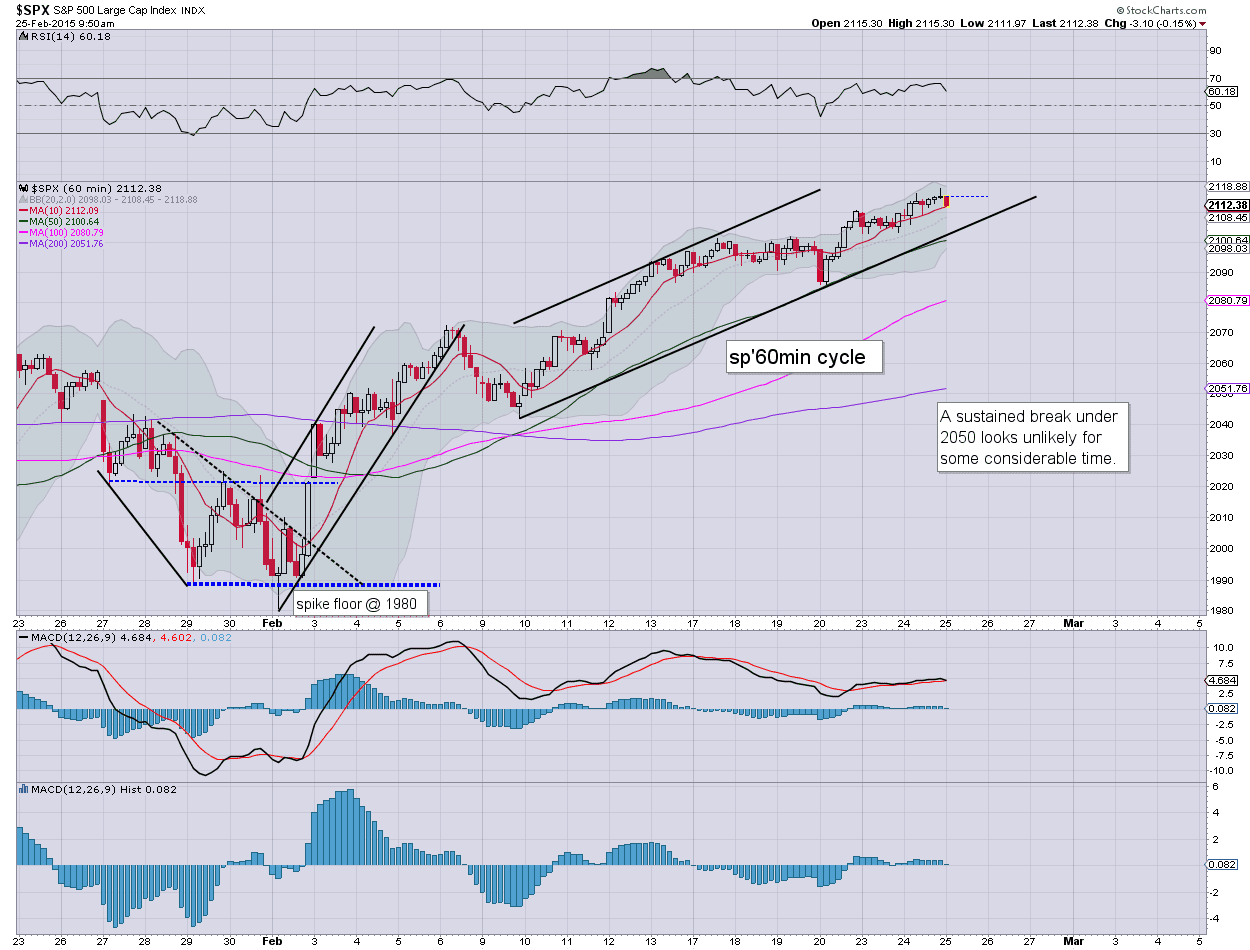 Time for a valium, wine.. or something. 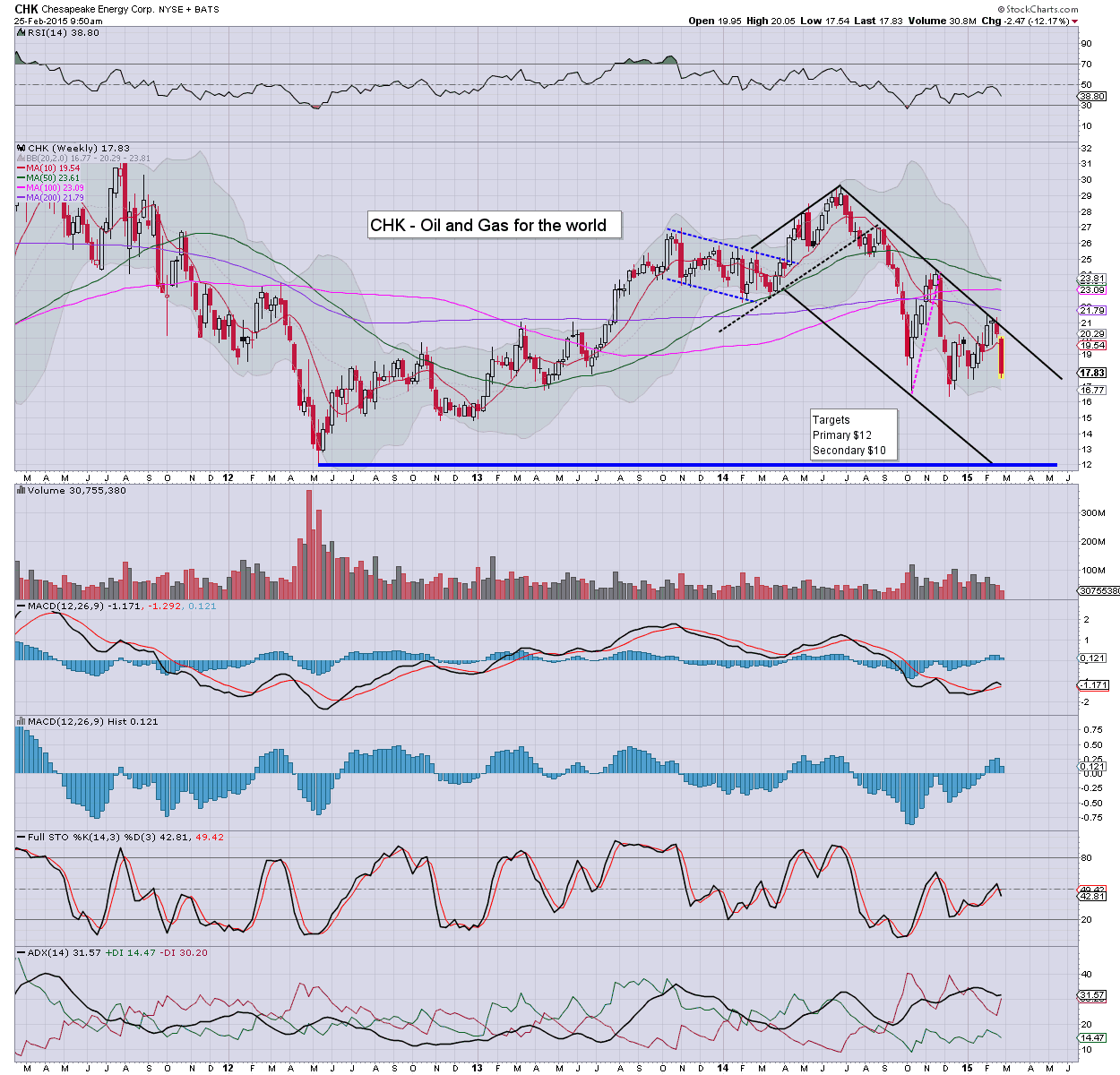 Seen on the bigger weekly chart... downside target zone remains 12/10.. by mid/late summer. I am a fan of the company..  but there looks to be very viable downside of a further 35/45%.

*the late summer looks to be 'shopping cart time' for a great many of the commodity related stocks (for those that think we rally in a hyper-bubble into 2017 or so).

VIX has been smacked lower... despite minor equity declines... to the 12s.


Train wreck TV.  The film 'still alice' comes to mind.
Posted by Trading Sunset at 14:52:00
Email ThisBlogThis!Share to TwitterShare to FacebookShare to Pinterest

Good morning. Futures are fractionally lower, sp -1pt, we're set to open at 2114. Metals are holding moderate gains, Gold +$8. Oil is +0.9%. Yellen is set to offer more monetary spiel to the political class this morning at 10am. 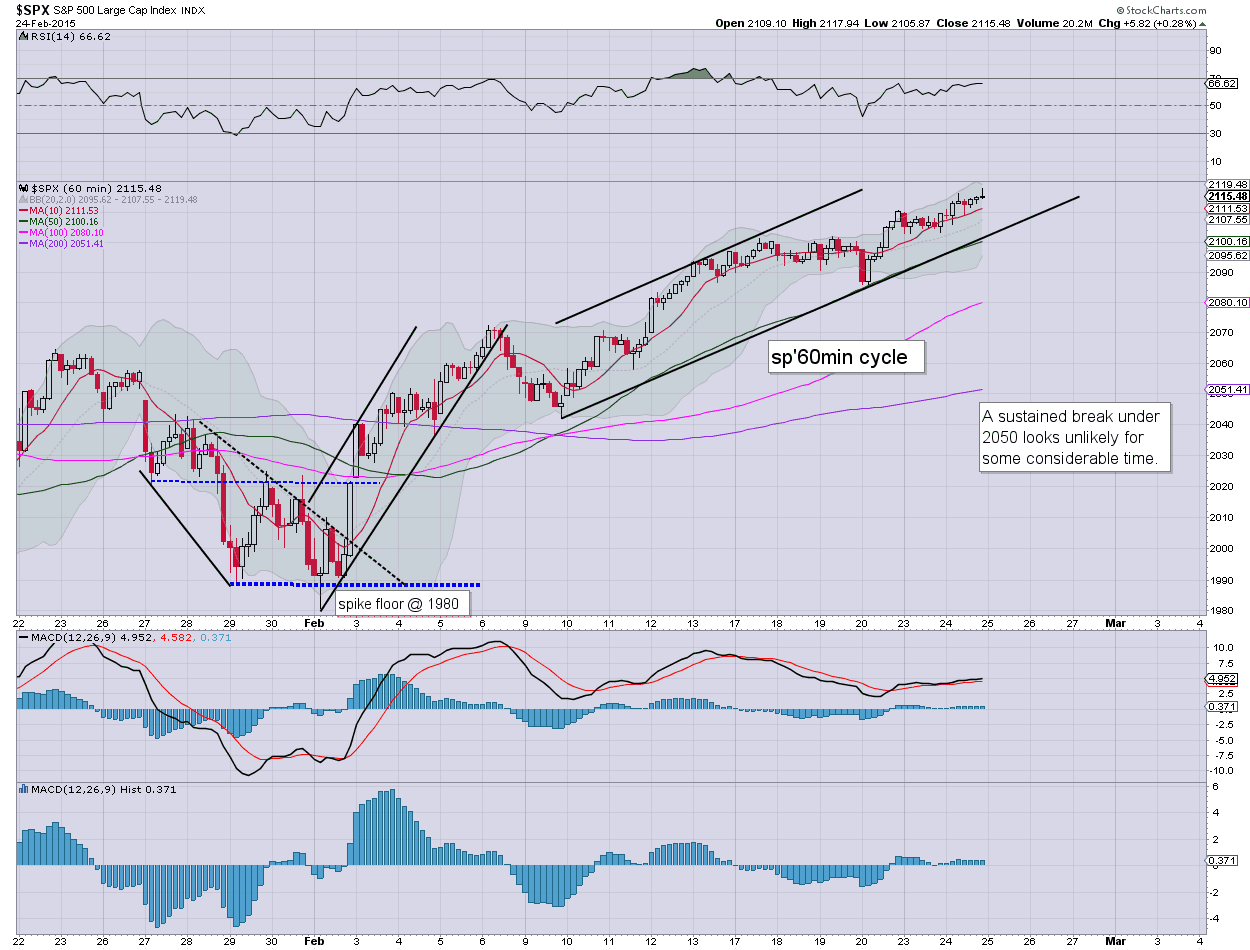 Mr Market will be listening to Yellen to speak to the US congress at 10am. The testimony will be the exact same... but the questions will probably be more mediocre and bizarre (not least from Maxine Waters).
-
Notable early weakness, CHK -5.4% (earnings?)
--

Hunter with Cahn, probably one of the most kooky guest he has ever had. There is all sorts of wild and crazy talk in this one...

9.10am. Watching HPQ CEO Whitman on CNBC.... worse corporate leader (or should that be raider?) in modern history?

Market is not buying her nonsense talk.... HPQ -6.4%.. after earnings.
Posted by Trading Sunset at 13:37:00
Email ThisBlogThis!Share to TwitterShare to FacebookShare to Pinterest

US equities saw another day of new highs, sp +5pts @ 2115. The two leaders - Trans/R2K, settled higher by 0.4% and 0.2% respectively. Near term outlook offers a retrace to the 50dma in the sp'2050s, but current price action does not suggest such a wave has even begun. 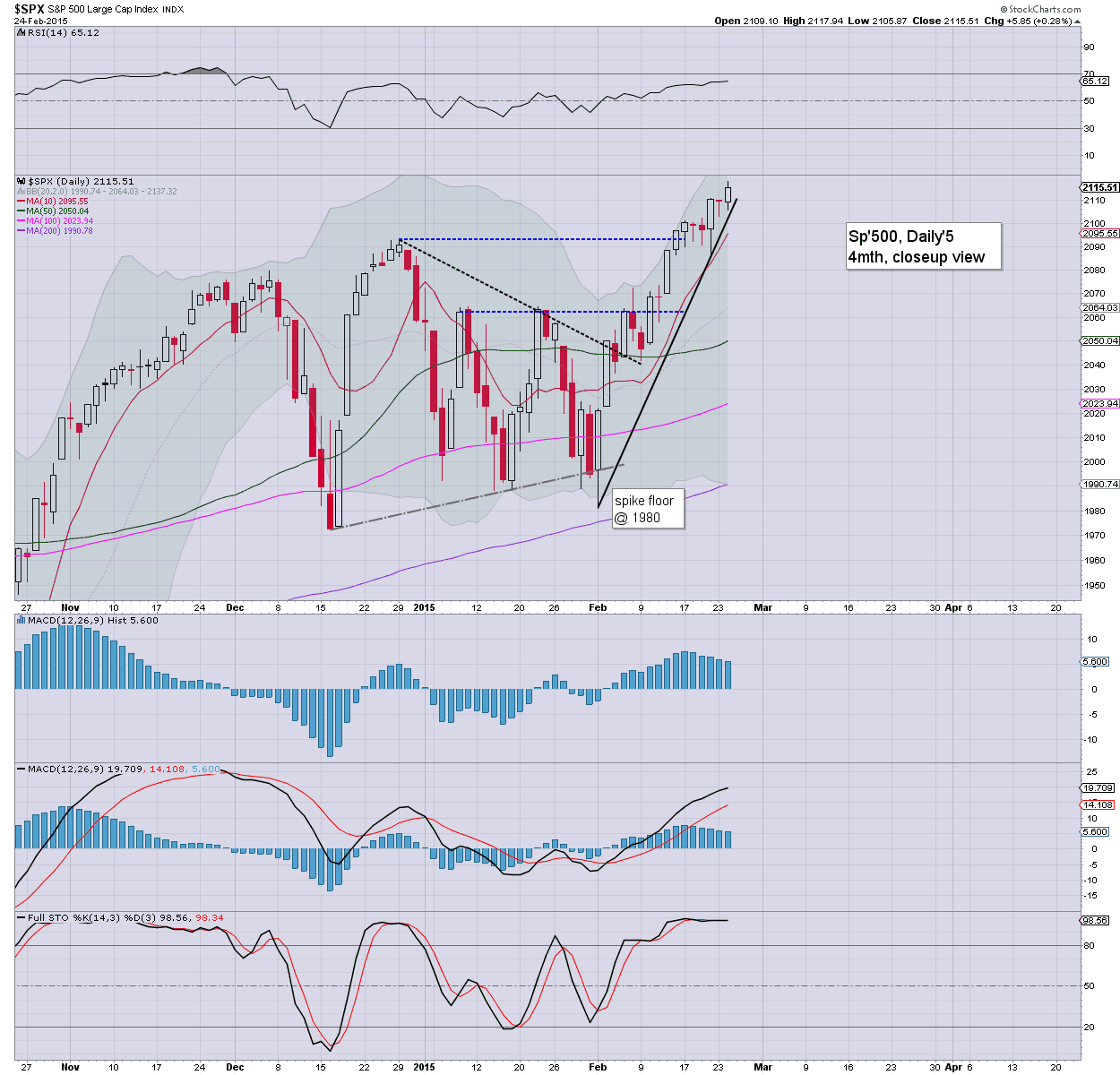 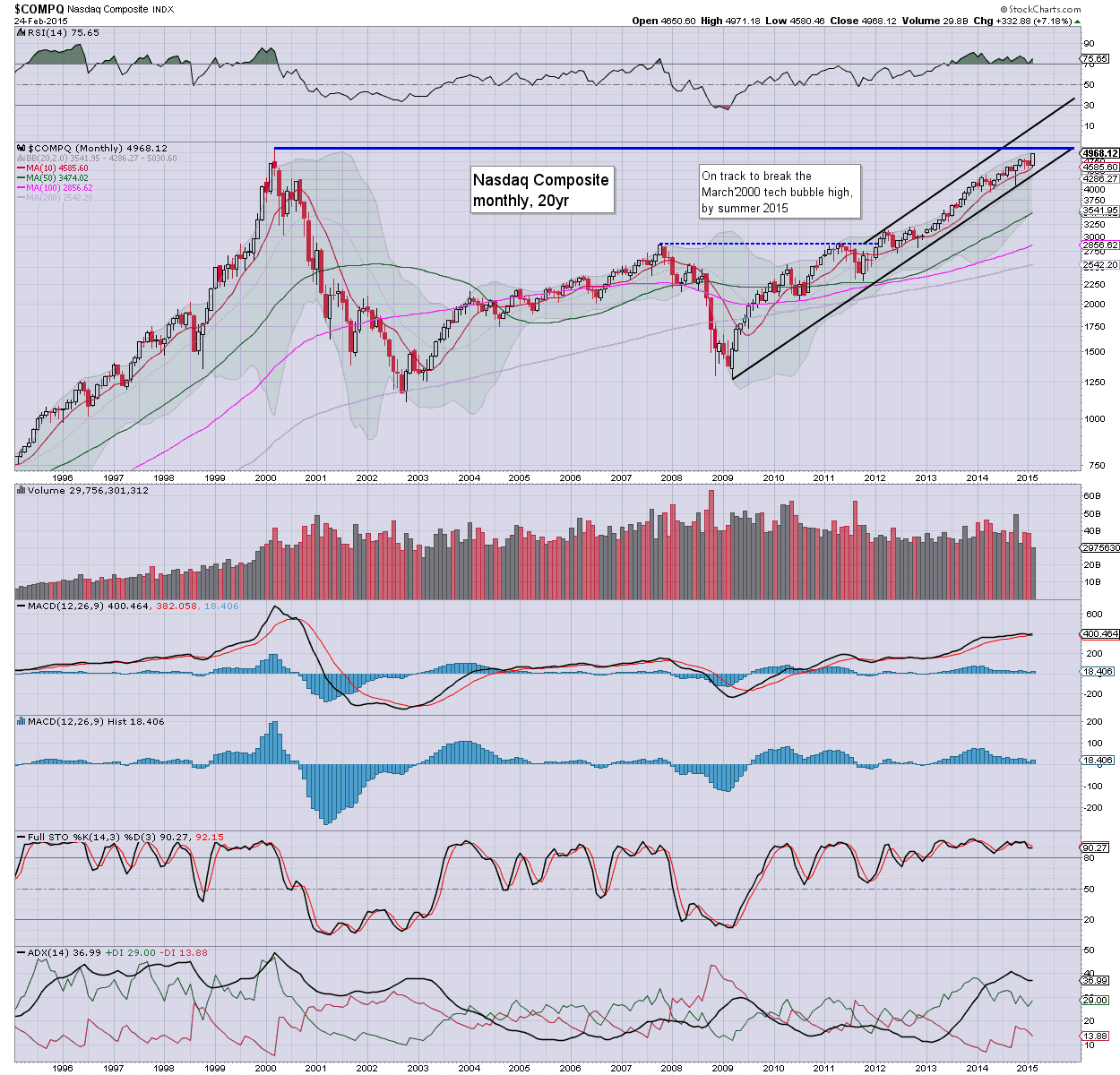 So.. another set of new highs for the US equity market... and market appears in classic algo-bot melt mode. This could easily continue for some weeks. The only aspects that argue against that are a few individual stock charts (such as AAPL) that are clearly over-stretched... along with the R2K. 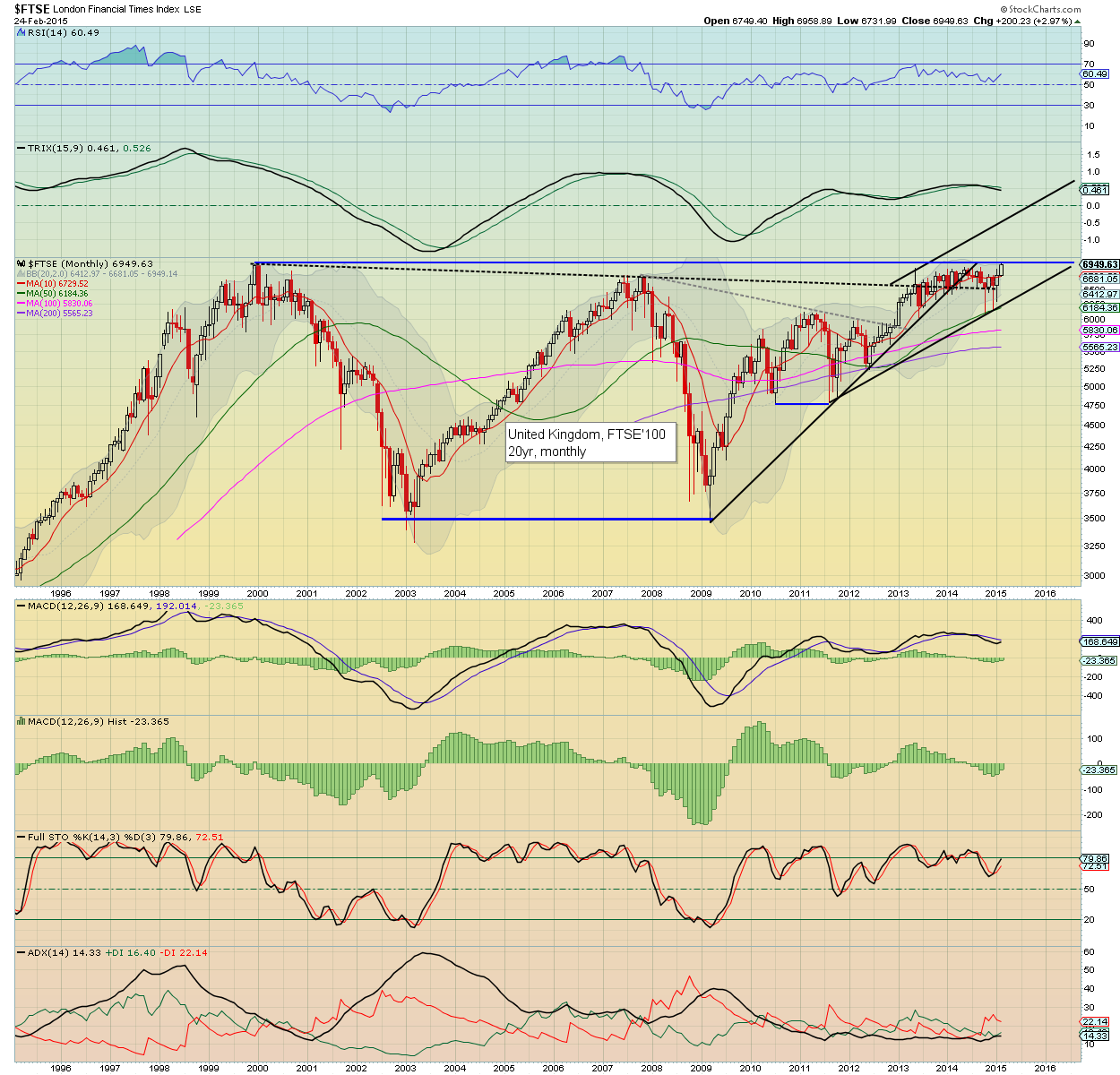 Wed' will be day'2 of the Yellen, this time addressing the US congress.