The daily cycles are turning back upward, the bulls do not yet have a conclusive break higher, but they are certainly still in control.  Bears remain in real trouble, and the VIX displays no sign of near term trouble. 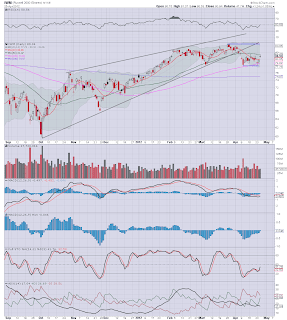 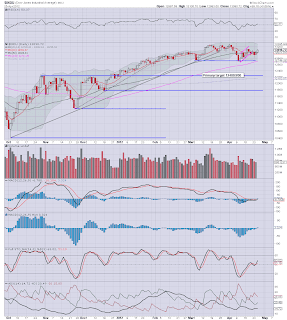 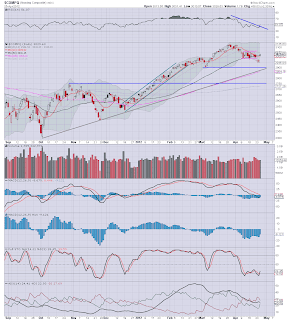 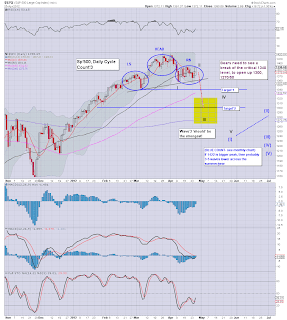 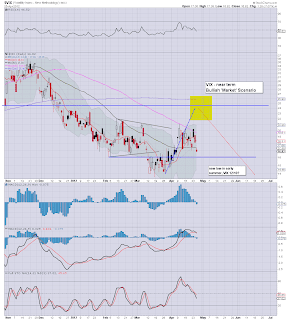 IWM brushed the 50day MA today. with a marginal fail, but nothing remotely bearish yet. The Dow is now back above the level of what was the bear flag - and is now positive cycle on the MACD. The NASDAQ comp' is of course leading the way - primarily due to AAPL. The Sp' had a similarly strong day, and is arguably at the very top of what could yet be a right shoulder.

The VIX closed very weak, it couldn't even hold the 17s, a Thursday morning touch of the 16.00 level looks very likely.

More a little later this evening, including a new monthly outlook, which links with the Sp' count'3 chart listed above.

The market closed about as close to the next bearish sand-line as it could have. The bears will be under serious threat into tomorrow, if futures overnight are up more than a mere 0.25% There will be a lot of big money stops around the current 1390/95 level. 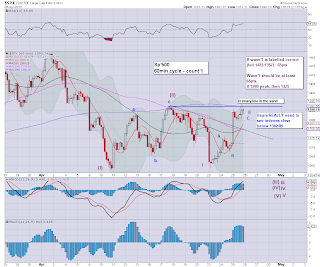 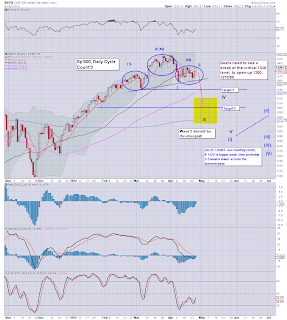 We closed right at the top of the RS bubble, this is about as high as this outlook can tolerate. Even a small move to sp'1395 tomorrow would arguably violate this chart. 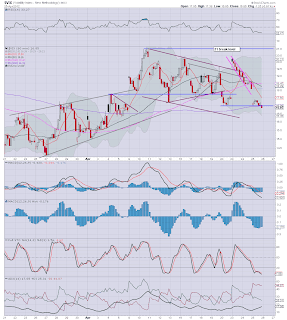 The closing bell at the NYSE was rung twice (a historic first?)..as you may have heard from the clown channel coverage. A sign? A turn? Well, what is clear is that market remains right on the edge. The bears can NOT sustain even a small gap up tomorrow morning. Bears need at least a moderate Thursday gap lower to get away from this extremely dangerous level. The VIX closed weak, and shows zero sign of turning back upward.

What is clear is that 3 big threats to the bears have now been endured and will soon fade from this markets incessantly short-term memory - the AAPL earnings, the FOMC press release, and Bernanke's press conference.

Much more in the evening!
Posted by Trading Sunset at 21:09:00
Email ThisBlogThis!Share to TwitterShare to FacebookShare to Pinterest

Whilst Benny continues speaking his glorious words of wisdom and insight into macro-economics, lets take another quick look at where the indexes are as we enter the closing hour. 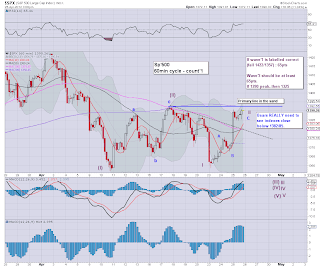 Trading has been a little choppy this past hour. We've seen another challenge to break new highs, but that has so far failed. The VIX is holding a decline of -5%  - still in the low 17s.

A close under the 10MA (sp'1383) would be a moderate victory for the bears, that is what I am looking for this hour.

The next two trading hours are most likely critical, and will quite possibly shape the next few months. Bears will be looking for a full scale reversal on the daily and hourly cycles. Will the Bernanke inspire the market to sell off into the close? 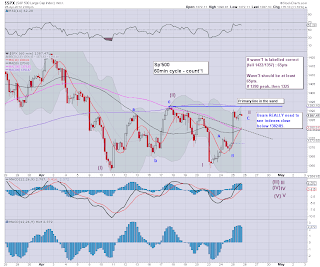 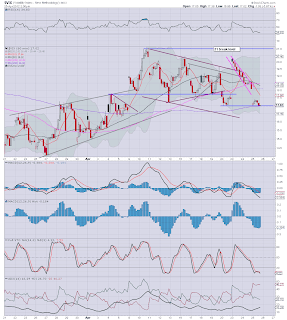 So far the VIX shows no sign of turning back upward, although the 17.00 level does appear to be the immediate 2-4 hour floor.
--

We do appear to have got stuck at sp'1390, if this is the top, then it would sure help raise the confidence of the bears if we can close under the 10MA of 1381

yours...  ready with the tea.
Posted by Trading Sunset at 19:02:00
Email ThisBlogThis!Share to TwitterShare to FacebookShare to Pinterest

Today is indeed probably the most important day since last October's low. The FOMC press release was effectively 'same nonsense as usual'. There is no planned extension to operation-twist, nor any talk of QE3. The bulls are not getting any more QE until the market falls considerably, its probably that simple. How far? I would still guess something at least in the 1150/1100 zone, which will probably take some months to reach of course. 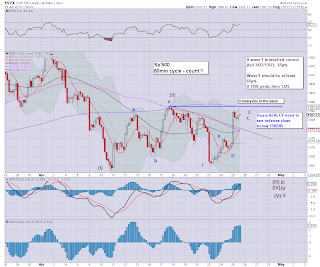 --
As follows is a new chart. It is a compilation of my own thoughts, and from the other regular chartists I follow (most notably, Daneric, Pebble, Pretzel, Knight) 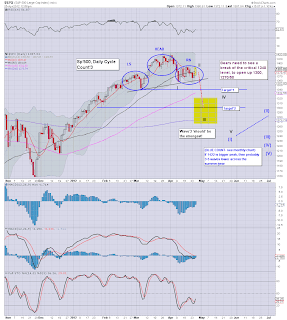 We have a clear lopsided Head and Shoulders formation. Bears will need to see a break below 1340, and eventually 1300 to confirm it.
--

Other issues today so far

-precious metals getting the hammer treatment (I'll post more on that later on my Gold/Silver page)
-AAPL is $11 from the $618 opening high. We have a black-doom candle on the daily chart.

If today turns out to be a reversal day, then we could very well be about to see some really exciting downside action.

More later..on what is becoming a very busy day.

Posted by Trading Sunset at 18:02:00
Email ThisBlogThis!Share to TwitterShare to FacebookShare to Pinterest

The FOMC issue their press release in the next 30 minutes. I can only imagine the stupid word games the various hosts on the clown channels will soon be playing again. How many times will the Fed say 'easing'..or 'low rates until 2085?' Its all utter nonsense of course, but is a great example of how messed up the present financial system is. We're left with what will probably be stagflation in the western world, whilst the TV hosts count/analyse words in press releases  Ohh, but don't worry though, Apple sold more iPads, everything is okay! 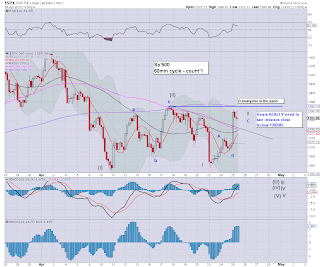 Bears need a serious reversal today. Preferably a close below the 10MA of 1377


Posted by Trading Sunset at 17:01:00
Email ThisBlogThis!Share to TwitterShare to FacebookShare to Pinterest

So we have had a strong open, yet it is probably based on low volume, and there has doubtless been a lot of short-stop reverse cascade issues! As noted last Wednesday, the 'serious money' would have had good stops in the 1390/95 zone.I can only imagine the horror of those bears who have been stopped out, only to then see the rest of the day (if) we go lower. 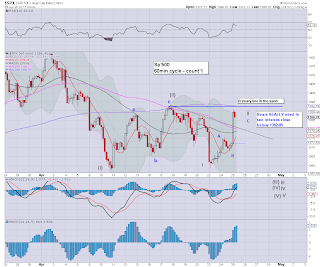 The markets reaction to the Bernanke this afternoon, could well shape the next few weeks, if not months of trading.

Posted by Trading Sunset at 16:01:00
Email ThisBlogThis!Share to TwitterShare to FacebookShare to Pinterest

A pretty strong opening move upward, lead by AAPL. We're now back to levels from last Wednesday morning.The FOMC press release is 12.30pm EST, with the Bernanke speaking at 2.30pm (EST). How the market closes today will be even more important than how it opened. 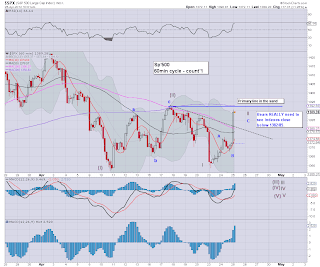 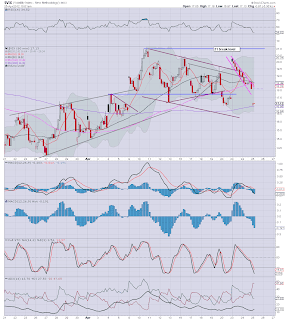 Will today be a reversal day? So far, there is absolutely no sign of that, but we've a long day ahead.

The Bears with the most lose stops - from last week, would be set to get the kick around 1392/95. So, there is a serious threat of a reverse stop-cascade, which could break us back above 1400.

Clearly, a close of  sp'1400 would be a real disaster to every bearish case out there. Right now, a close in the low 1370s looks a distant dream. The Bernanke is probably still having breakfast right now.....will he come to the rescue of the bears this afternoon?

More later.
Posted by Trading Sunset at 15:03:00
Email ThisBlogThis!Share to TwitterShare to FacebookShare to Pinterest

AAPL has indeed lead to an overnight moderate jump in the futures, 2% for the tech' and around 1% for the other indexes. I suppose it could be worse for the bears, but not much. 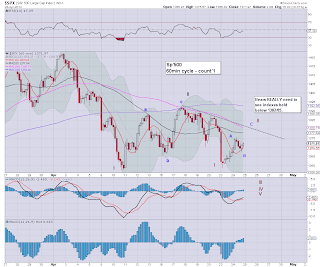 From a cycle perspective, we are already kinda high, so its very likely we will rollover today, but we could just put in another higher low, which would certainly be bullish in the short term.

If Monday's gap lower was the conclusion for sub-wave one, then we're in minor bounce wave'2 UP still - in a standard ABC correction. So, wave'3 hasn't even started yet.

*There are a number of other chartists out there who are suggesting a move as high as 1400 still, and that Monday would actually be the base of 'B' wave...and we're now in C up.
-

Will Benny kick the market even higher (1390s?), or will he aid market sell off and close red?

Good wishes for Wednesday trading.
--
*Updates throughout today.
Posted by Trading Sunset at 13:02:00
Email ThisBlogThis!Share to TwitterShare to FacebookShare to Pinterest

The Euro - even dirtier than the Dollar

The Euro currency has been in a strangely tight trading range for the last eleven weeks. All trading ranges eventually come to an end, which way will this one go? 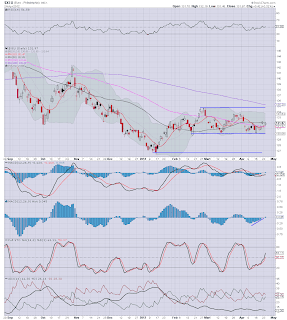 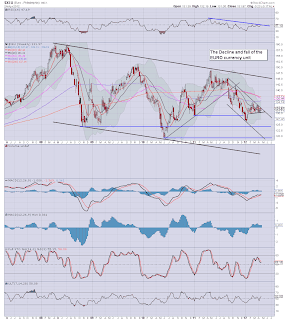 There is a fair bit of chatter and recognition across the various finance sites/blogs, that a break under 1.30, should lead to a quick decline to at least the 1.25/24 level. That should (in theory) help send the dollar on a significant up wave, and thus put downward pressure on both commodities and equities.

Right now, there is certainly no sign of the Euro breaking lower.This is kinda remarkable considering the dire EU national econ-data that keeps appearing in the last few weeks. Of course, the whole paper currency issue is - as even the clown channel hosts now occasionally acknowledge, about 'which is the least dirty paper?'

Considering the long term chart of the Euro, is there anyone still out there who would not believe that the Euro/Dollar will reach parity sometime in the next year or two?

--
Goodnight from London city.
Posted by Trading Sunset at 03:30:00
Email ThisBlogThis!Share to TwitterShare to FacebookShare to Pinterest

The weekly and monthly cycles are still suggesting the broader trend in the market is changing. However, the SP' is only -3.5% from the peak of 1422. Only a move under the 10MA on the monthly cycle (1285) would give some real support to any mid-term bearish targets in the 1150/1000 range. 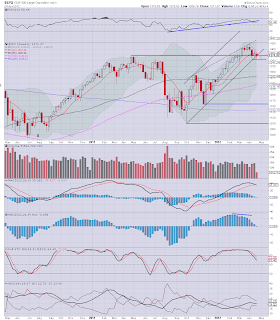 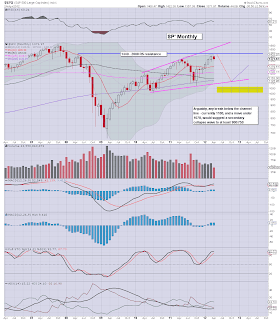 The weekly cycle on the SP'500 has only just gone negative cycle on the MACD. The monthly cycle will probably take a few months at least to show a conclusive rollover. For short term traders, such cycles are of little use, but I still think they should be followed. When the underlying trend is UP, most trades by default should be Long! It sounds simple, but of course in practice, its very much more difficult to trade within all the day to day market noise.

There are just 4 trading days left of April (now there is a scary thought!). If we close April at - or below, current levels, I'd strongly believe that is indeed the first warning of bigger falls to come. Will be an interesting 4 days to keep an eye on.
Posted by Trading Sunset at 00:30:00
Email ThisBlogThis!Share to TwitterShare to FacebookShare to Pinterest
Newer Posts Older Posts Home
Subscribe to: Posts (Atom)