Volatility slips into the close

With the main indexes clawing a few extra points higher into the close, the VIX naturally slipped lower, closing -2.2% @ 13.89. Daily trends suggest a jump >15, with a possible spike into the 16/17s this Friday..or certainly, early next week. 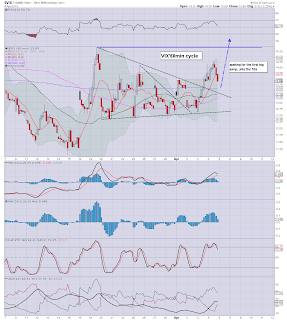 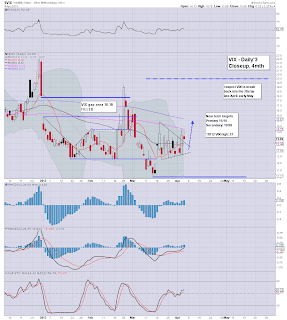 Despite the market opening higher, the VIX never really dropped much, and it was showing some distinct strength across the day.

The VIX looks like is very much primed for a jump into the mid teens either tomorrow, or very early next week.

There is the threat that the indexes could open Friday higher - if the market decides the jobs data is 'acceptable', yet I can't see such gains holding.

A somewhat choppy day in market land, where opening gains failed...with the indexes briefly going red, and closing slightly higher. The USD saw very strong gains all erased, with Oil and the precious metals recovering some of their declines. 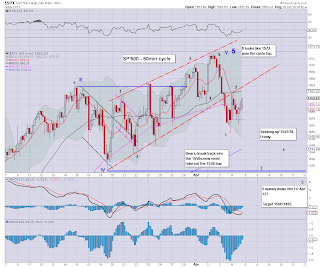 So, we close a little higher, but it sure doesn't negate what are now at least moderately bearish signs across the daily and weekly charts.

Tomorrow should be more dynamic than today, especially in VIX land, where I think the 16/17s are viable, if those low sp'1540s are hit.

There is a 'small' possibility that the 50 day MA @ 1530 could be hit.
Posted by Trading Sunset at 20:59:00
Email ThisBlogThis!Share to TwitterShare to FacebookShare to Pinterest

The market is trying to stage its usual latter day recovery-ramp. USD has seen a very strong intra-day swing, and is now a touch lower. Gold and Oil are hence recovering. VIX is back to red. Daily/Weekly cycles continue to warn of general weakness. 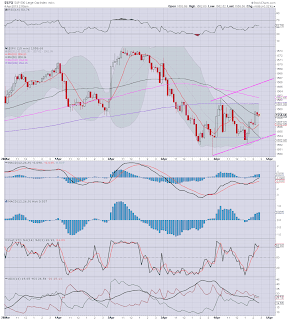 So..I am short, will hold overnight, seeking sp'1540 as an exit tomorrow. 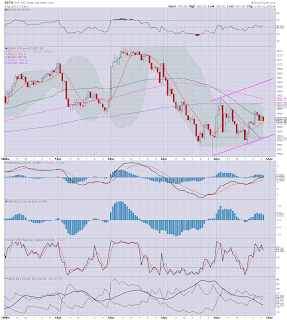 I suppose it could be a micro-bull flag, and we still close in the 1560s..but regardless, MACD cycle looks weak...hourly charts look a weak mess.


3.30pm..hourly chart..we have 2 topping spikes so far. If we close like this..or lower, I'll be more than content. 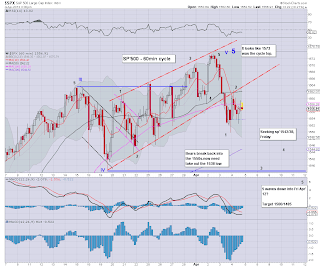 Lets be clear, there IS threat of upside tomorrow, but daily/weekly charts say...'short' to 1540.

There is the 50 day MA @ 1530..which would be a particularly attractive level tomorrow afternoon.

back at the close!

Posted by Trading Sunset at 19:50:00
Email ThisBlogThis!Share to TwitterShare to FacebookShare to Pinterest

Mr Market is seeing another up cycle..and there is a real threat of a close in the mid 1560s. The bigger daily and weekly charts are now clear though...sell the rallies. Oil and Metals remain under severe pressure..not least from the relentlessly rising USD 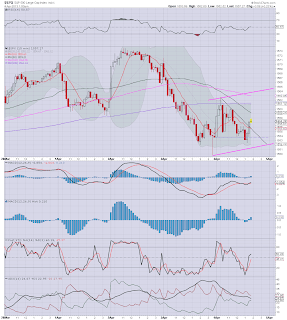 There IS a 'small' risk of a jump at the Friday open to test the 1576 high, but considering the MANY bearish indictors out there (not least..Oil)... I think the risk/reward is more than reasonable.

Downside target for the Friday close is sp'1540
-- 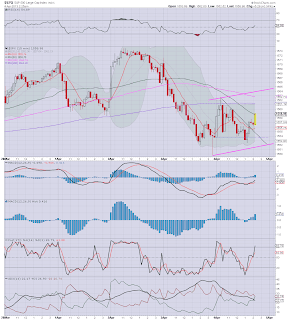 Posted by Trading Sunset at 18:50:00
Email ThisBlogThis!Share to TwitterShare to FacebookShare to Pinterest 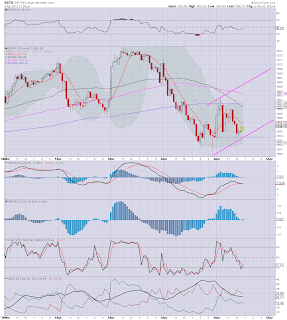 I'll focus on the micro-charts this afternoon..even the 60min is probably too broad.

I might be wrong....and I sure won't be taking any longs of course.
--

Right now...I will go heavy short on any afternoon ramp into the mid 1560s.

Regardless, I ain't chasing this nonsense lower...too much threat of late day ramp. 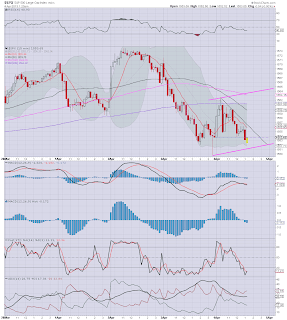 We've seen that kind of latter day recovery dozens of times already this year. Why would today be any different?

1.30pm..market breaking back upward...anything >1557..and this nonsense will keep going.
Posted by Trading Sunset at 17:50:00
Email ThisBlogThis!Share to TwitterShare to FacebookShare to Pinterest

12pm update - there is now clarity

Its been a confusing few weeks, but the last few days have given clarity. The market is putting in at least a mid-term top..and we're now starting a 4-6 week down cycle across April..and into May. There is multiple support for this, not least in the commodities market.

*There is a great deal going on, its hard to know what to cover 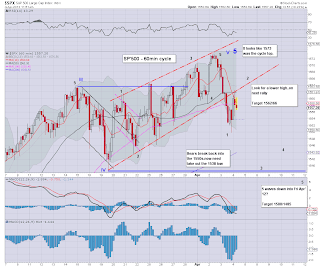 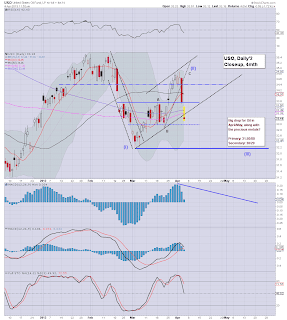 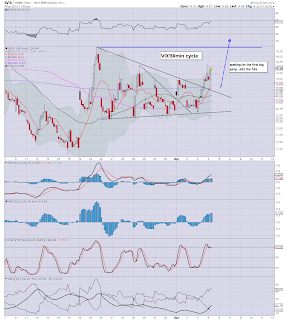 I am patiently waiting, I think bulls could kick things higher still.this afternoon to sp'1566/68
--

Lunch time video from Mr Carboni...the 1000th video..interesting outlook on the precious metals...Oscar is looking for Silver 17..and then 12.

Is the high in for the day? 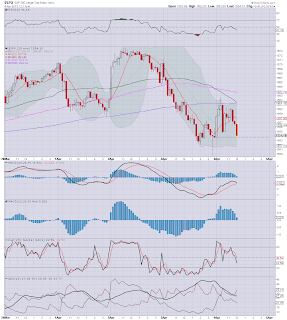 I do not like chasing it lower at this level...this is dangerous level..if the bulls can manage a ramp at this point.

I would be real annoying to miss out on a down move to 1540, but I can't chase it lower at this level.

Target re-short...2.30pm...around the sp'1564/66 area..
Posted by Trading Sunset at 16:53:00
Email ThisBlogThis!Share to TwitterShare to FacebookShare to Pinterest

Mr Market is messing with the heads of many this morning. Early gains..then..whack...but underlying imminent momentum IS up on the hourly charts. Sp'1564/66 seems likely this afternoon..at which point..its arguably time to start hitting buttons. 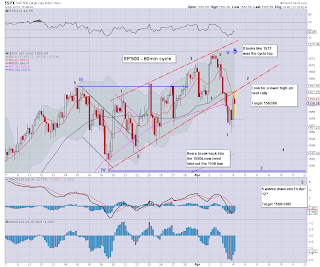 I've added a downside count, that extends into next Friday.

It is HIGHLY speculative, and subject to revision, but right now, thats my best guess.
--

---
I remain waiting....lets give those bull maniacs a few more hours to battle higher.

*poster 'redalphbet', thankyou for your comment, but these pages have Disque installed, so your comment won't appear to anyone else. Get a disque account...maybe.

Its kinda hard to know what to cover, there is a LOT going on, even though the indexes are only up a little.

For instance, are you noticing Oil ? Its getting DESTROYED in the past 2 days. There is huge downside viable across next week.

I remain waiting. Lets see where we are around 1-2pm. sp'1566..even 68 seems viable this afternoon.
Posted by Trading Sunset at 15:50:00
Email ThisBlogThis!Share to TwitterShare to FacebookShare to Pinterest

Good morning. A moderate rally across the morning seems likely, whether it can continue all the way into Friday..that is now the issue. Oil is significantly lower, along with the metals...not least helped by a significantly stronger USD. VIX is largely unchanged. 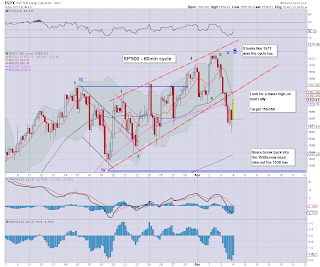 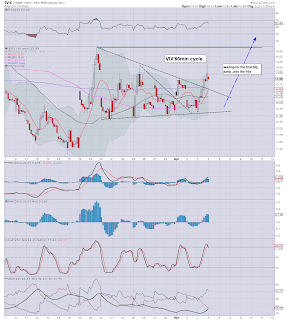 After yesterdays action, I'm finding it hard to envision we make a play for 1576. It is possible, but I'm...guessing....no.

Thus..I will look to short the indexes later today, probably around 1-2pm
--

*updates across the day, and I'll certainly note, when I start hitting buttons for a major re-short.
-

On balance, i do NOT see 1576 being challenged.

Lets just see how the next 2-3 hrs play out. Bears need to give the bulls a few more hours at least.

Look for VIX to find support around the 13.60/50s.
Posted by Trading Sunset at 14:50:00
Email ThisBlogThis!Share to TwitterShare to FacebookShare to Pinterest

Bears are starting to seize control

With the Transports also breaking key rising support, the bears can start to be increasingly confident that a mid-term cyclical top is being put in. Whether we briefly test 1576 by the Friday close, seems largely inconsequential. This market is surely headed lower from current levels. 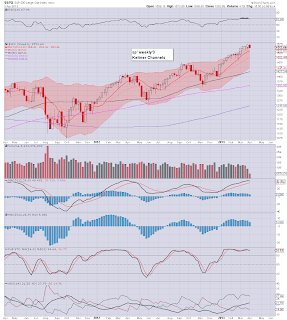 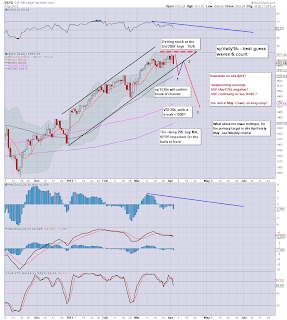 Again, I think the weekly Keltner chart is useful to keep in mind. The lower band will be extremely hard to break on any initial down cycle. On any basis, bears can NOT expect any lower than the 1440/60s..as things currently are. 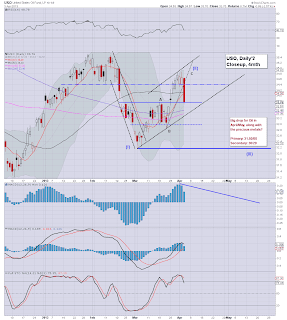 I was short USO from last night, and had been looking for a decline to the 34.40s..which I got..and that was indeed where I exited this morning. Yet, Oil fell across the day, and it was somewhat depressing to see just how low USO was by the close. I really didn't expect that level of drop on the first move.

Regardless, I will look to short Oil again on the next bounce, which could be as high (ironically) as my exit today around 34.40, although if the market is weak..maybe it'll struggle just to hit 34.0

Lesson of the day...'stops are good..but not too tight'.

There really isn't much tomorrow in terms of data, just the usual weekly jobs numbers..not that many consider them too important anymore.

The hourly index chart (see earlier post) does offer significant upside potential tomorrow...so don't be surprised if we open back in the sp'1560s. Whether we can still make a play for 1576..I've no idea.

Regardless of whether 1576 will yet be hit, I am now very confident of the next 4-6 weeks.

*I will be looking to re-short the next equity/Oil bounce, and will be focusing on the 15/60min cycle charts tomorrow..more than ever.

I finally got around to watching this from Grant Williams. Its relatively new, although its already been highlighted on Zerohedge. I know nothing about the narrator, but its worth seeing. In particular, it deals with the issue of fractional banking and gold leasing.

Posted by Trading Sunset at 04:00:00
Email ThisBlogThis!Share to TwitterShare to FacebookShare to Pinterest

The bulls are unquestionably losing control, with most indexes closing around 1-1.5% lower. The Transports have followed the R2K, and also broken key rising support. Oil saw a sharp drop of 2.5%, and is now likely starting a major down cycle across April...and into May. 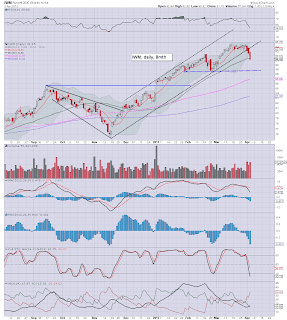 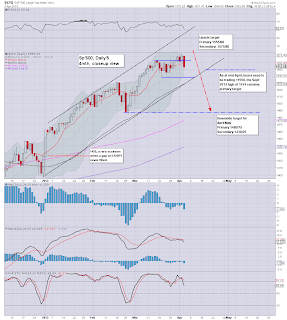 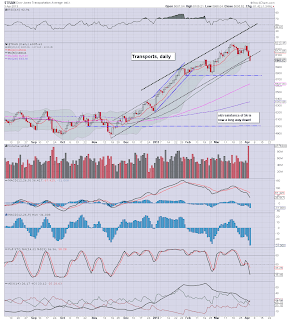 So..we now have two indexes having broken key rising support..and indeed..the break of the Transports from the support that stretches all the way back to the post election - mid-November low...is very important.

Without question, this multi-month cycle is coming to an end. R2K was the first warning - it put in its high 3 weeks ago, and now we have two indexes broken.

I've no doubt now that the SP, Dow..and Nasdaq will follow across the next few days.
-

In terms of the MACD (blue bar histogram) cycle, we're very low on the R2K/Transports, so..it wouldn't be too surprising if they get stuck soon. Yet the other indexes have a viable 3-5 days downside..which would take us all the way into the end of next week - when the tax year ends.