The world equity indexes are pushing strongly higher, with the US Dow'30 almost 4% higher so far this month. Even the EU PIIGS of Spain and Italy are now offering clear breakouts to the upside. Baring some major crisis, the world markets look set to climb into spring 2014.


Lets take our monthly look at ten of the international indexes 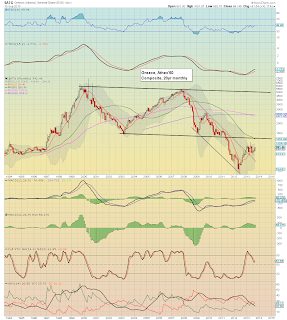 As many - not least the Germans, are starting to realise, the Greeks are going to need another bailout or two, just to stay afloat. The Greek economy has already collapsed of course, and even the IMF recognise that it will be at least another 2 or 3 years until the Greek economy stops contracting.

In terms of price action, the year so far has been one of side ways chop around the big 1000 level. It could be argued it is a large 9 month bull flag. A monthly close above 1100 would confirm that view. Upside target would then be 1300, with an almost equally likely 1500. That is a very significant 50% above current levels. 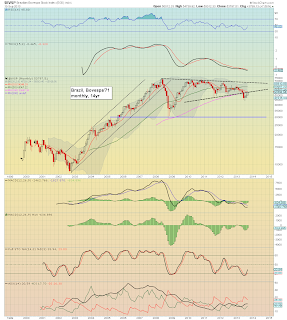 The Bovespa index has recovered all of the declines of May-June. Any further rally will then offer the 65000 level, which is a clear 20% higher. From a MACD (green bar histogram) cycle perspective, this index is set to have continued gains into spring 2014. 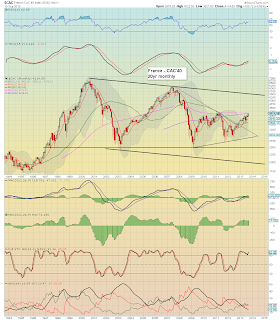 The CAC is testing the highs of 2011. Near term trend is clearly bullish, and a monthly close in the 4300s will open up the 5000/5300 zone for next year. There is nothing bearish here. Of course, the policies of Hollande and his socialists comrades are going to have severe negative repercussions in the longer term. 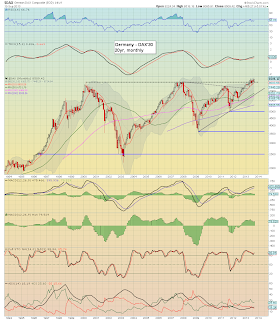 The engine of the EU, the German DAX is making a break to the upside, and the big 10k is now the ultimate psy' level target for next year. The German elections are the only near term threat to stalling the current rally. So long as some form of coalition government can be formed, the DAX looks set to rally into next year. 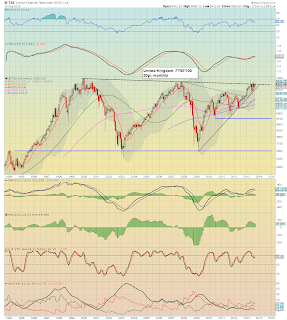 Despite underlying structural problems (although less than any of the EU PIIGS), the UK equity market is on the edge of a breakout. Any monthly close in the 6700s should be enough to confirm much higher levels into 2014. The next key psy' level of 7000 would be the obvious target within 4-6 months. 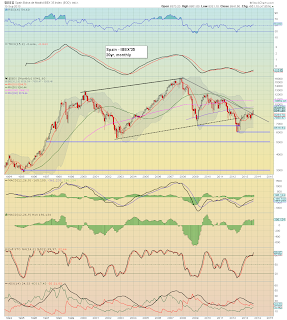 The ugliest of the PIIGS, Spain remains a collapsing EU state (only marginally less bad than Greece), but that sure isn't hindering the IBEX, which is already almost 8% higher this month! The size of the gain is not surprising, considering we now have a clear breakout from the decline trend/resistance of the 2008 collapse wave.

The strength seen in the IBEX - despite the underlying economic issues, is highly suggestive of where the rest of the global indexes are now headed. First big target is 10k, but more likely 12k. 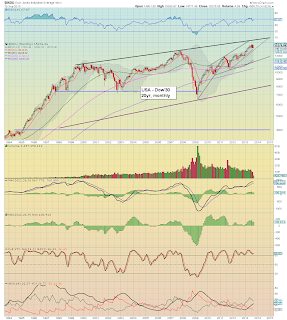 For the doomer bears out there, first downside would be the monthly 10MA of 14600. Yet the bears failed last week to continue the multi-week down cycle. Near term trend is unquestionably higher. Only with a break <14k, would suggest a new multi-month wave lower..and even then, there is huge support around 12k.

Considering the other world indexes, the notion of Dow <14k, seems completely nonviable. Further, those still resolutely touting Dow 5k, really need to stare at the above monthly chart for some considerable time. The broader multi-year trend remains to the upside. 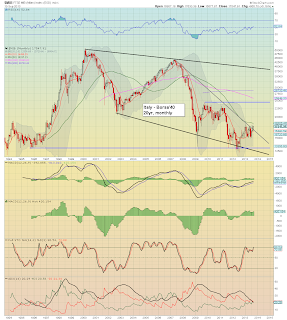 The second largest of the EU PIIGS, the Italian Borsa - like the IBEX, is breaking out. First key target is 20k, and then 24k - the initial bounce from the 2009 lows. Italy remains in a far better state than Spain, but it is loaded with too much sovereign debt, and being tied to the Euro is still a major hindrance to their international competitiveness. 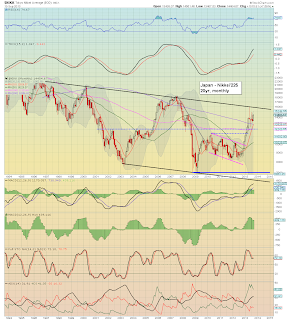 After some very significant weakness in May-June, the Nikkei is moving higher again. With 'Abenomics' set to continue until it literally blows up the Japanese financial system, the Japanese market is clearly making another attempt to break multi-decade downside trend/resistance.

First key target is a monthly close in the 16000s. If that is achieved, then it would indeed be a major indicator of much higher levels, with subsequent targets of 18k, and then the big psy' 20k level.

Underlying demographic issues remain critical. There is the ongoing Fukushima disaster of course, although that is becoming a more background (no pun!) issue. The only other issue are those rocks which the Chinese have their eyes on. Perhaps China should simply make an offer for them? 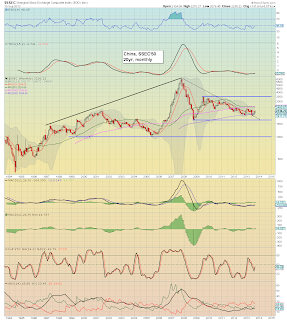 From a chart perspective, you could argue China broke the declining trend/resistance, and has successfully back tested the breakout. The current September gain of almost 7% is very important, and if it can hold those gains, it bodes well for a strong run into 2014. First big target is 3500, but that is a massive 55% higher than current levels.

There remains a great deal of discussion about how much of the China econ-data is valid, but regardless, they have a superb and extensive manufacturing base. What country would you rather live (or be invested) in for the long term, a paper-pushing financial center, or a country that makes real goods?

There is unquestionably a major upward move occurring. Especially of note are the breakouts in the Spanish and Italian indexes. If even the ugly PIIGS are rising, then the rest of the world markets are going to do at least as well.

It would appear that we have a very clear upward trend now underway, one that looks set to continue into next spring. If that is the case, we're probably looking at a rather comfortable 20% higher.

Further, interest rates across the world remain relatively low, and many are agreed the US bond market has now ended a thirty year rally. So..if the money is not flowing into US sovereign debt, then (aside from holding cash), the only other place is...equities. 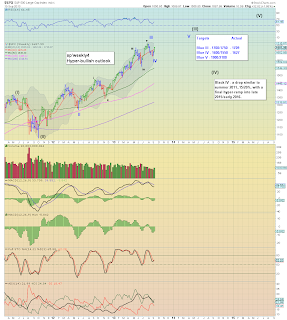 If the market does not get upset with the FOMC next Wednesday, the Sp'500 will move into the 1700s again, and quickly break new historic highs. Another 20% higher would take the sp' into the 2000s, a level that (surprisingly) very few are suggesting right now.

Next week begins with empire state and industrial production. If those come in okay, market should be able to rally on Mon/Tuesday..before moving to a holding pattern ahead of the FOMC announcement on Wednesday at 2pm. The Bernanke will do a press conference around 2.30pm.

There is an array of econ-data on Thursday, and the week concludes with 4 Fed people speaking, any of which might move the market with the usual fed-speak nonsense. It should be noted next Friday is quad-opex, so the price action could be pretty choppy.

*the only significant QE-pomo next week is Thursday, $3bn
--

So, we have the world indexes all pushing higher, and after last weeks bear failure, I have to now assume we're going to just broadly climb. There are of course a great many issues out there, but the last four autumns have been rife with 'issues', and that sure hasn't stopped the bulls from ramping into Christmas..and the following spring.

Having considered..literally the world, I remain content to be long the US indexes into next week. In terms of what the FOMC will announce, my best guess is for QE to be reduced by 15bn (10bn MBS, 5bn POMO/T-bond buying). Clearly, that still leaves a very large 70bn a month, and that will be a serious problem to those seeking equity downside in Q4.

As ever, all comments are most welcome, and I hope your weekend is good.

back on Monday  :)
Posted by Trading Sunset at 18:28:00
Email ThisBlogThis!Share to TwitterShare to FacebookShare to Pinterest

With the US indexes holding moderate gains into the weekend, the weekly index charts have confirmed last weeks initial turn. The bulls look set for further gains next week, the only threat is if the market gets upset with what the FOMC announce. 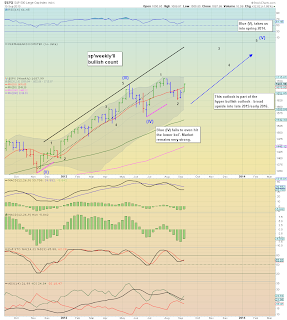 So, the sp'500 gained almost 2% this week. Even the Friday closing minutes were a touch bullish.

Last weeks blue candle on the weekly 'rainbow' chart was indeed the initial warning, and this weeks green candle confirms the turn.

Bears had their chance last week...and failed. This week confirmed it.

Frankly, I am very disappointed at the lack of power on the bearish side. This is the second weekly multi-week down cycle in the past four months where the lower weekly bollinger was not hit. It remains a fiercely bullish market, with equity bears that haven't seen any decent downside action since last November.

How high in this new up wave? There are plenty out there touting 1750/1800 or so, and I'm inclined to at least agree with that.

Thing is, why would we stop in the mid 1700s? So long as the debt ceiling doesn't turn into another farce - as July/August 2011, the market should be able to rally into Christmas..and all the way into spring 2014.


The following outlines the 'best bull case' for the next few years.. 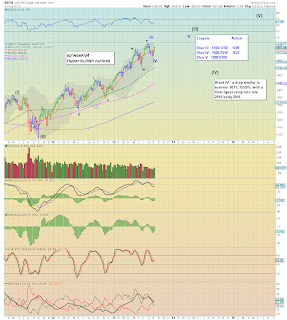 For the doomer bears out there, the above chart is of course sickening. I'm sure not happy with it either.
--

--
*next main post, late Saturday, probably on the World monthly indexes
Posted by Trading Sunset at 04:00:00
Email ThisBlogThis!Share to TwitterShare to FacebookShare to Pinterest

The main indexes all closed moderately higher, with the sp +4.5pts @ 1687.99. The two leaders - Trans/R2K, closed with gains of 0.1% and 0.5% respectively. Near term trend remains bullish, and that is now also supported by the weekly index cycles. 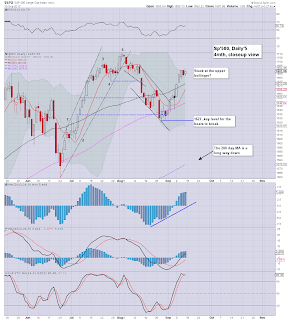 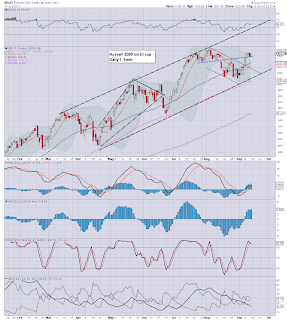 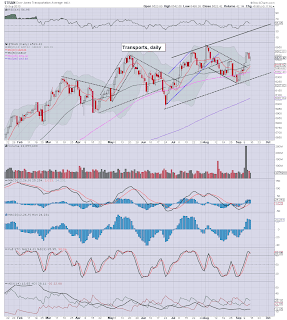 Despite a touch of weakness in the morning, the indexes managed to claw higher into the close, and the sp' weekly close of 1687 is VERY bullish for next week.

The bulls only needed to hold the weekly 10MA of sp'1675, so this weeks closing is unquestionably highly suggestive of further upside next week.

Yes, there is some considerable uncertainty about what the FOMC might announce next Wednesday, but still, the consensus appears to be QE-taper of 10/15bn.

It really won't take much to kick the sp' to new highs (>1709), monthly charts are offering 1715/25, although that will be far easier later this month..rather than FOMC week itself.

*I hold long the indexes across the weekend,
--
a little more later...
Posted by Trading Sunset at 01:00:00
Email ThisBlogThis!Share to TwitterShare to FacebookShare to Pinterest
Newer Posts Older Posts Home
Subscribe to: Posts (Atom)