With equities holding moderate gains across much of the day, the VIX remained very subdued, settling -6.0% @ 12.11 - the lowest daily close since Dec'5th 2014. Near term outlook is for further equity gains, with the VIX set to remain within the 15/11 range into early June. 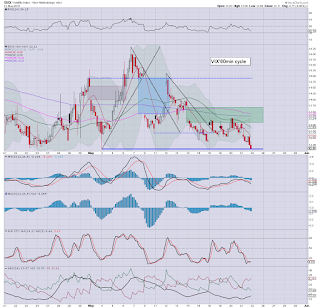 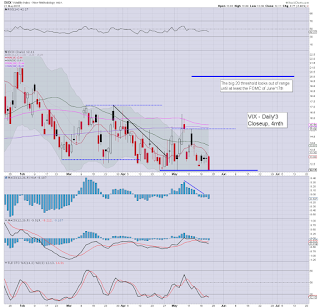 VIX remains very low.. with the key 20 threshold out of range until at least mid June.

Obviously, the VIX won't keep falling, and a new multi-week up wave is well overdue. Right now though, VIX bulls look like they will have to be patient until mid June.

If sp'2160/80 zone at the time of the next FOMC, there is clearly going to be an opportunity for VIX to spike into the upper teens.
-- 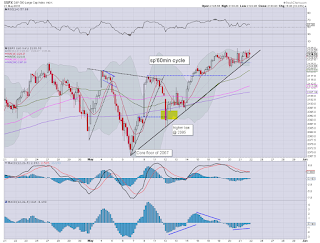 *key earnings due at the close: HPQ
--

As expected, another closing hour in favour of the equity bulls... as bears get short-stopped out.

Tomorrow will be interesting, with CPI and the Yellen due to speak on the econ-outlook.

VIX breaking new lows in the late afternoon.. reflecting a market with no concerns ahead of the long weekend.
- 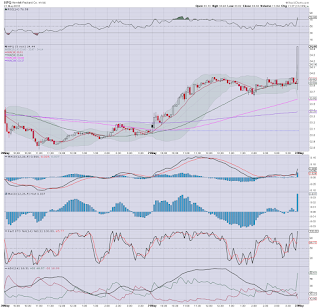 With a micro cycle to the upside, the sp'500 and Dow are both within range to break new historic highs into the close. Regardless of the exact close... it has been another day for the equity bulls. Metals remain weak, Gold -$5... and looking particularly vulnerable into the Friday close. 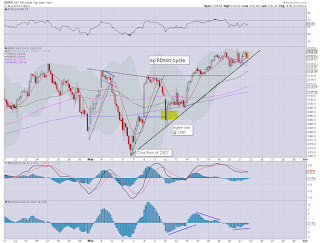 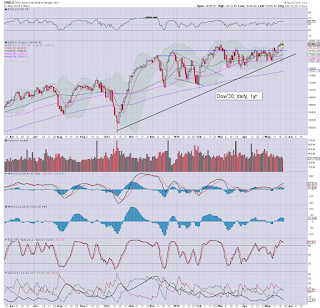 *daily candle on the Dow is pretty bullish, upper bol' is offering the low 18400s in the immediate term.
--

Well, it would have been a somewhat tiresome Thursday, were it not for dynamic movers like BABA, RIG/SDRL, LL, or even BBY.

This is no market for the bears.. and I am quite looking forward to the long weekend :)
--

back at the close.
Posted by Trading Sunset at 19:53:00
Email ThisBlogThis!Share to TwitterShare to FacebookShare to Pinterest

US equities are looking a little tired, but still a touch positive. Regardless of the exact close, it remains a case of no downside power. USD is -0.2% in the DXY 95.20s. Gold remains somewhat weak, -$6, whilst Silver is u/c. Oil is set to close with sig' gains of around 3%. 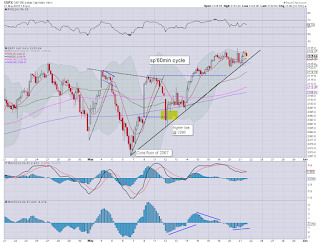 Hourly equity cycle is offering a wave lower... but really... where is the downside power going to come from?

Clearly, there will be 'holiday issues' tomorrow, but still.. its hard to envision any move <2120.

... and keep in mind, by mid June, both weekly/monthly cycles will be offering 2170s.

--
Meanwhile... its a rather reasonable summers day in London city... 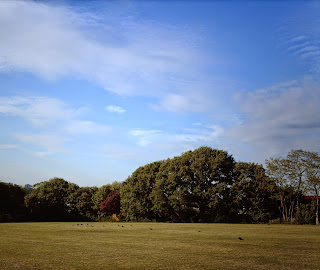 --
back at 3pm
Posted by Trading Sunset at 18:56:00
Email ThisBlogThis!Share to TwitterShare to FacebookShare to Pinterest

US equity indexes are moderately higher, with the sp'500 just 0.1% away from breaking above yesterdays new high of 2134. Price action remains bullish, if somewhat choppy.. ahead of the long 3 day holiday weekend. Metals remain weak, Gold -$6. Oil is holding powerful gains of 3.6% in the $60s. 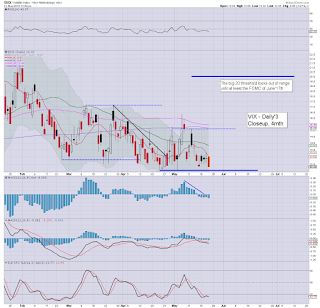 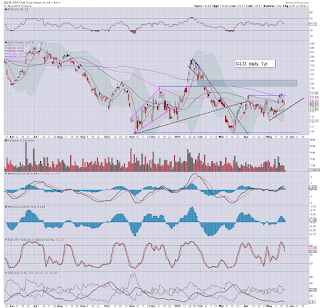 Without question, this is one hell of a complacent market, not least as Greece continues to teeter on the edge.

It should be clear that a GREXIT is possible at any point this summer, but for now.. the market simply does NOT care.

*as noted by Mr T earlier, there are certainly some who are picking up VIX crash-protection.
--

time for some sun.... back at 2pm
Posted by Trading Sunset at 17:53:00
Email ThisBlogThis!Share to TwitterShare to FacebookShare to Pinterest

Once again it has been a case of opening minor chop.. only to see the market resume higher. The sp'500 could break a new historic high for the fourth consecutive day. Metals remain weak, Gold -$5, whilst Oil continues to build powerful gains of 3.5%. 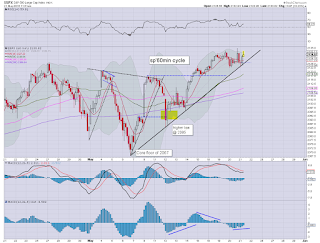 Little to add.. on what is just another day for the equity bulls... price action simply doesn't offer any real hope to the bears until at least mid June.

notable strength: BABA +3.3%.. as the momo chasers are starting to appear in force.

--
time for lunch :)
Posted by Trading Sunset at 16:52:00
Email ThisBlogThis!Share to TwitterShare to FacebookShare to Pinterest

11am update - no downside power

US equities remain moderately mixed, but it remains a case that there is simply no downside power, with every minor down wave being bought. VIX reflects a market with ZERO fear of a GREXIT, -2.5% in the 12.50s. Metals remain moderately weak, Gold -$4. Oil continues to build sig gains, +2.9%. 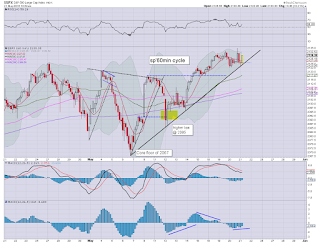 Not much to add... except that underlying MACD (blue bar histogram) remains on the low side.. and is offering another up wave into the weekly close.

Weekly cycle will be offering the sp'2150s by end month..  and there are increasingly many other signs that the market will just keep on climbing across the summer. 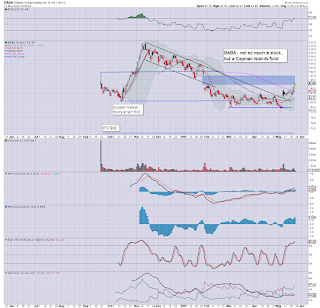 notable weakness: Lumber Liquidators, -14% in the $21s.. as the CEO decides to just walk out the door.
Posted by Trading Sunset at 15:55:00
Email ThisBlogThis!Share to TwitterShare to FacebookShare to Pinterest

US equities open moderately mixed, with an early low of sp'2122. USD is battling to turn positive, and that is pressuring Gold, -$5. Oil is building sig' gains of 2.1%.. back above the $60 threshold. 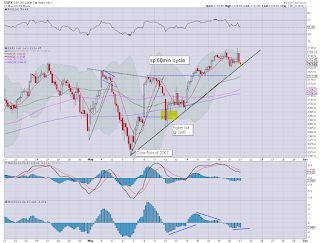 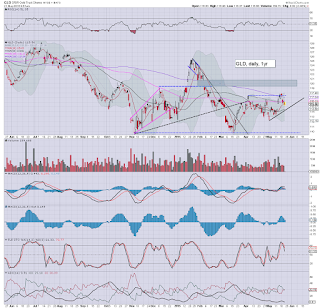 *the early declines in Gold are interesting, and I would like to see the $1200 threshold closed under today.
--

Another relatively quiet open... although still econ-data to come...

Equities remain in minor chop mode. Hourly cycles favour another wave higher... rather than some pre-holiday washout.
Posted by Trading Sunset at 14:53:00
Email ThisBlogThis!Share to TwitterShare to FacebookShare to Pinterest 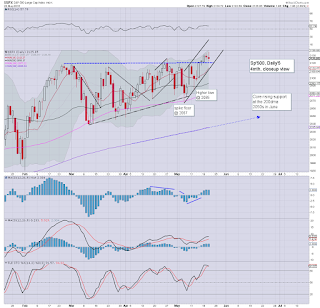 *awaiting a wheel barrow of econ-data this morning...
--

So.. a little overnight weakness, but as usual... nothing significant.

Broadly, it still looks like the main market will rise into mid June. With it now looking that a rate rise is unlikely until at least Sept', it increasingly appears the market could rally all the way to Aug/Sept.

Eyes on the Nasdaq... 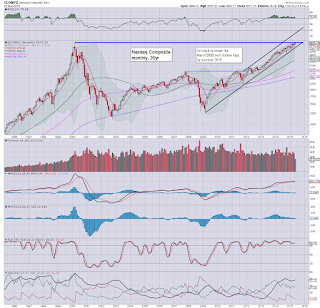 A break above 5132 would be VERY significant.. and suggestive of another 7-10% higher across the summer, before the first chance of a sig' retrace. 5K is arguably in the process of solidifying as the new floor.

8.34am.... NEWS... Lumber liquidators CEO resigns... LL -24% in the $19s, simply dire. The knife catchers cross the last few months are getting zeroed out.
Posted by Trading Sunset at 13:22:00
Email ThisBlogThis!Share to TwitterShare to FacebookShare to Pinterest

Whilst the US equity market saw a day of minor chop (aside from the Transports), there remains notable strength in the Chinese and Japanese markets. The Shanghai comp' looks set for the giant psy' level of 5K, whilst the BoJ fueled Nikkei is battling toward 22K by July. 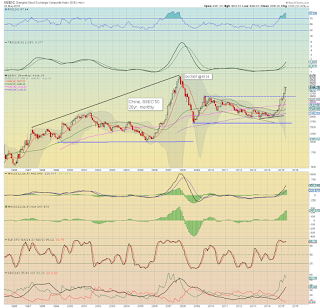 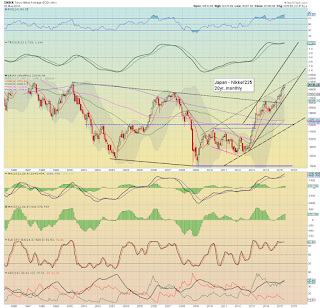 After a little weakness earlier this month, the SSEC is back on the rise... and looks set to break the recent high of 4572. Once we see 4600s.. it should become pretty clear to the mainstream that 5K will be hit this summer.

As for the Nikkei, it is higher for 11 of the last 13 months... and the two net monthly declines were only fractional. The BoJ is clearly intent on keeping the Nikkei on a course to far higher levels... talk of challenging the 1989 Dec'high of 38957 is already starting to arise.


-
Brief update on the Trans

It is highly notable that the Trans - 'old leader', has seen 5 net monthly declines of the past 7. That should certainly give the bull maniacs at least something to think about. 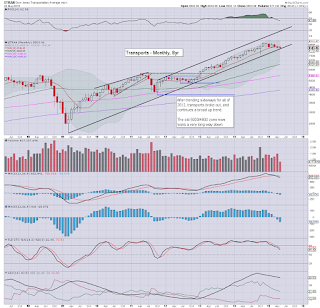 However, 2012 saw the Trans trade sideways, whilst the rest of the market soared. To me, that is probably what we're seeing right now.

As ever, always recommended viewing, although I certainly do not agree with all of what was said.
--

Thursday will see a wheel barrow of econ-data...

That will give the market plenty of excuse to move one way or another in the early morning.

*it is notable that the Yellen will be speaking on the econ-outlook - Friday @ 1pm, and despite a 3 day weekend looming, there should more than enough to keep most traders awake.
-- 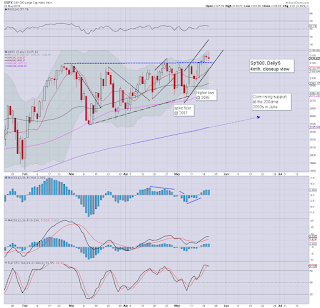 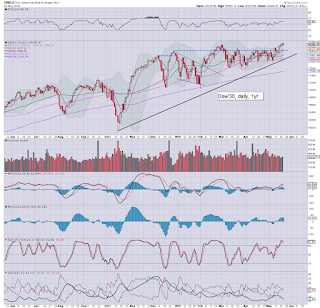 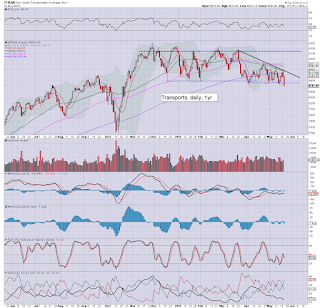 *another particularly weak day for the Transports, with a rather nasty close in the low 8500s. Next support is around 8300.
-

As a collective, the broader market remains strong.

It certainly merits mention that the sp'500 achieved a new historic high for the THIRD consecutive day... and that certainly ain't bearish, is it?

The bigger weekly/monthly cycles remain highly suggestive of the 2170s by the next FOMC of June 17th.
--