It was a very mixed week in market land. Opening moderately lower on Monday morning, but then a 3 day rally ensued. The rollover that began on Thursday was confirmed with the significant declines seen on Friday. 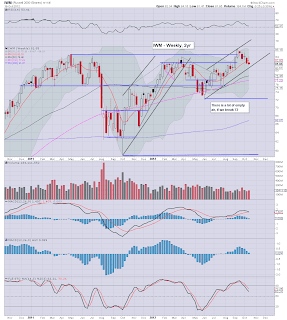 IWM is holding within the broad up channel from the June lows. Bears should be seeking a break <80, that will open up 76. The 72 level will be critical for those seeking a collapse wave - either late this year, or in 2013.

The underlying MACD cycle is set to go negative at the open next week, we should see some further downside price action. 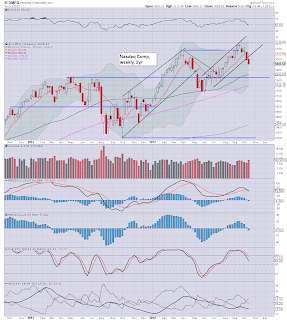 What was the strongest index is now becoming one of the weakest (although it will be near impossible for any index to match the state of the transports).

The MACD cycle is now already negative, and there is great potential for a considerable fall into late November. A very bearish sector, and it could be an early warning of trouble for both the Dow/SP. 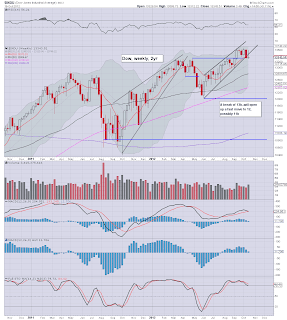 The Dow tried to break the highs from last week, but failed. The Friday decline was very significant, and the closing candle for the week was a very spiky one, the sign of a failed rally.

First target is 13000, and then 12500. All indicators are turning very bearish, and a major snap lower is anticipated this coming week. 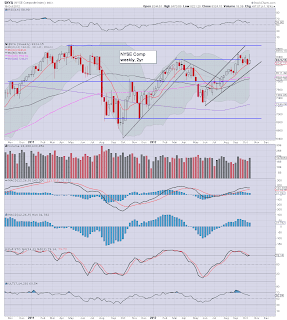 The master index is still within its broad up channel, but the closing candle was a very spiky one, the sign of a failed rally. The underlying MACD cycle is due to go negative in about 3 weeks.

Bears need to see this hugely broad index break below the big 8000 level. 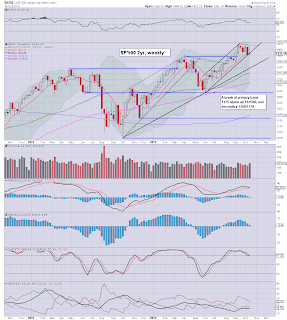 The sp' managed 1462 this week, a mere 12pts shy of its QE spike high of 1474, yet it rolled over, and the decline on Friday was the largest since late June. 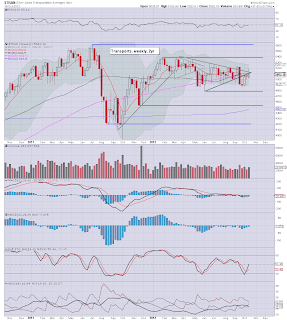 Certainly, for those bears short from the start of the week (that includes, yours truly), it was not the easiest of weeks. We came within 1% of setting new index highs on the Dow/SP', but the failure to break upward was very telling. The bulls are getting real tired. Not just the rally from the June sp'1266 low, but all the way back to the March 2009 sp'666 low.

Those deluded bull maniacs (and deluded they most certainly are) have been given their Christmas 2012 present already - QE3. What do they really have next to hope for? I realise there is a likely Spanish bailout likely in the near term, but that will probably only motivate the market higher for a day or two, if that.

With underlying global economic weakness, and the looming US fiscal cliff, the bulls have a real brick wall ahead of them on their beloved can-kicking freeway. How far away is the wall? It could be days, weeks, or even some months, but the wall will be hit, and its going to really hurt.

A special note, we have Q3 GDP this coming Friday, I'm looking for something <0.5% or so, which will bode badly for Q4 - which I'm pretty certain will be at least moderately negative. Corporate earnings are already showing clear signs of trouble, I can't imagine the next set of results being any better, in fact, they will likely be significantly worse.

The primary monthly trends remain largely bullish, so those bears getting excited after the Friday decline, need to keep things in perspective. There is NO clear turn lower on the monthly index charts (aside from the tranny, which has been a mess since the start of the year) Until we see a monthly close, somewhere around sp'1350/00, the bulls should still be said to be in control.

However, we do have some very clear warnings on the weekly charts, I most certainly expect some multi-month downside yet to come.

---
Don't forget to support the site, if there is one thing you do, tell your other trader friends! I'm also looking for new sites to add to my blog lists, so let me know if I am missing something good. As ever, your comments are most welcome, I appreciate them all.

I will be back on Monday (or Sunday night, if the Futures are showing some 'exciting' action).

Good wishes for the coming week
Posted by Trading Sunset at 18:53:00
Email ThisBlogThis!Share to TwitterShare to FacebookShare to Pinterest

The broader market ended the week badly. The main indexes declined by around 1.5%, lead by the Nasdaq which slumped 2.2% The VIX confirmed the declines with a close +13.5% @ 17.06. Provisionally speaking, it looks pretty bearish for the Monday open. The first level to take out will be the sp'1427 level. 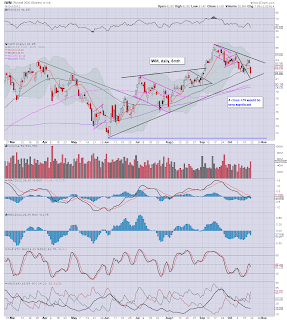 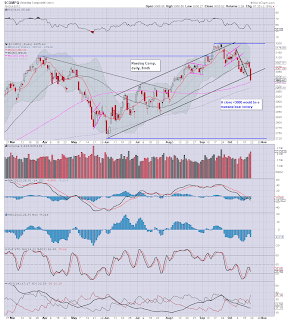 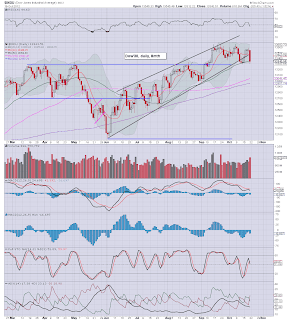 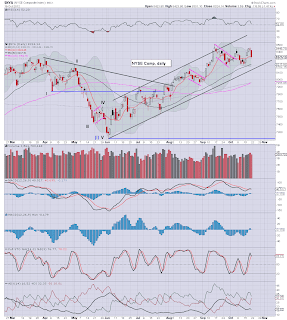 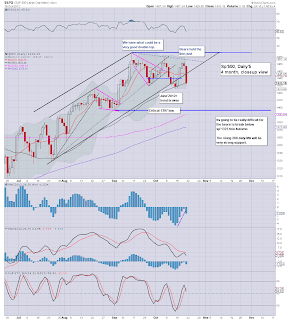 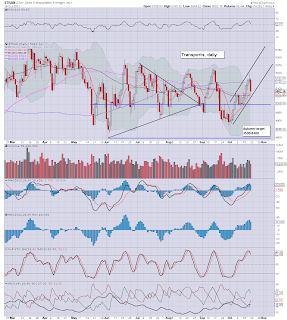 Well, this week was a bit of a roller coaster. Monday opened a touch lower @ 1427, only for the bulls to wrestle back control, and beginning a 3 day rally up to sp'1462. The rally failed to hold though after consistently bad earnings reports, and todays' close of 1433 is about as good as the bears could have hoped for.


Breaking open the crash-door - issues for next week

I probably shouldn't use the C word here, but still, its a valid consideration. There are a LOT of key levels to take out early next week, if the bears are going to be able to decisively put a halt to what has been another major bull rally since the June sp'1266 low.

If bears can get a daily close <1397, then I will very much be targeting the 1325/00 level within 'a matter of days, certainly before the US election'.

Right now, I can't see a break <1300 any time soon. Perhaps the fiscal cliff 'crisis' in late November/early December will be the catalyst for SP'1200 (as suggested via the monthly index charts).

A long day..but a good one. Next update - Saturday, probably dealing with those important weekly charts/

The main indexes closed significantly lower by around 1.5%, and the VIX confirmed those declines, closing 13.5% higher, to close @ 17.06.  The VIX weekly chart offers a very viable move to 20-24 early next week. 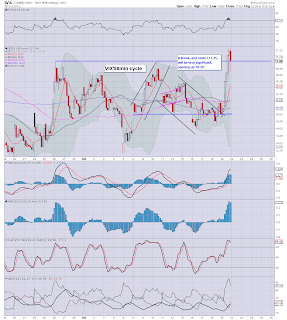 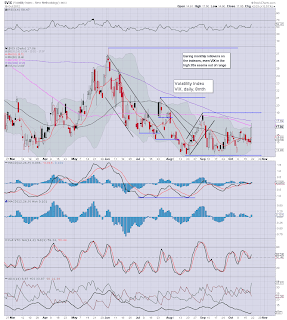 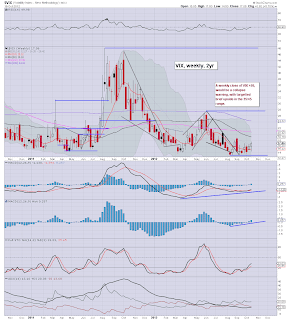 It was a very muted open for the VIX. Whilst the Dow was -100pts around late morning, the VIX was still largely flat. Yet, the VIX did finally explode (relative to action in recent weeks), and surged 17% late afternoon. The close was slightly off the highs, but the close in the 17s was a very welcome sight for the bears.
-

The VIX daily chart offers good upside to 19, or the Sept'1 high of 21. That would seem entirely possible on a Monday opening gap lower.

However, more importantly, the VIX weekly chart continues to battle higher, and is suggestive of upside, somewhere in the 20-24 range.

Lets be clear, if we see the VIX >24 at any point, we could see a brief intra-day spike into the low 30s. That would make for a superb exit for those currently long VIX calls, or index puts.

The bears are on the verge of taking back control. It will be vital on Monday for the bears to hold onto today's gains, if not build on them.