Night of the PIIGS

Whilst the two PIIGS prepare to do battle on the green grass once more (Italy vs Spain, Euro'2012 football final- in case you still not realise), here are a few things to consider before the Futures wheel spins up later tonight. 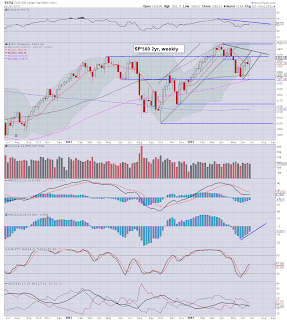 From a MACD cycle point of view we been battling our way higher for four weeks now, and are set to turn positive cycle in about 2 weeks.

From a price perspective, bulls must keep pushing this week, and have to make a break above 1390/1400 at least. Sp'1422 is going to be near impossible in my view, without a Euro-bonds agreement, and thats not likely for many months..if ever.

So, I'm expecting to see a fail this week, and then the only issue is how swift is the down move. With the jobs data released this coming Friday...that would sync up well with a turn lower after the July'4 holiday. 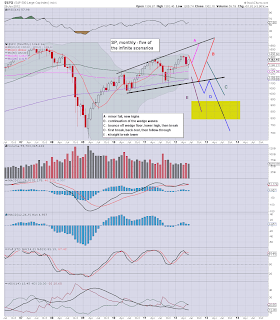 A chart I regularly highlight, there are doubtless many out there now touting new highs (A)..across this summer. After all, everything in Europe is fixed since the last summit, right?

My best guess remains B. Although the hyper-ramp since last Thursday 3pm has really confused matters. For the moment...I'll hold with B, but its getting very close to being scrubbed. 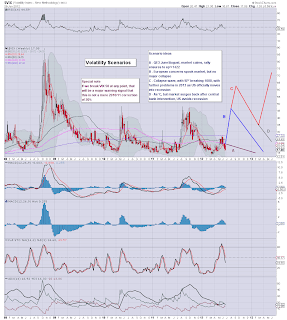 Mr VIX remains remarkably low. I suppose scenario A' is viable, but I'm still looking for a VIX explosion to at least the high 30s/40s within the next few months.

As I noted a number of times recently, what will be critical for the bigger picture, is whether VIX can break the big 50 level. If we break 50, then all sorts of 'interesting things' happen. Otherwise, its just the same sort of move we saw in summers 2010 and 11.

The market is closed Wednesday, so Tuesday could easily be dead quiet.

However, we do have key econ-data every trading day this week. So, Mr Market will still have to deal with that.

Maybe a little more later..after the wheel has spun up to speed.
--
Posted by Trading Sunset at 19:23:00
Email ThisBlogThis!Share to TwitterShare to FacebookShare to Pinterest
Newer Posts Older Posts Home
Subscribe to: Posts (Atom)