VIX swings back to the upside 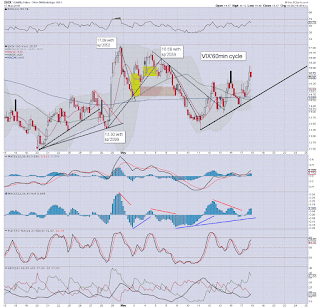 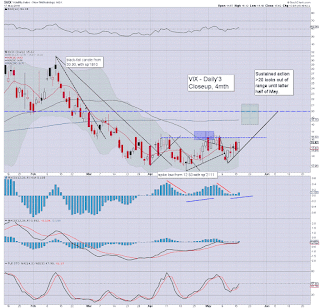 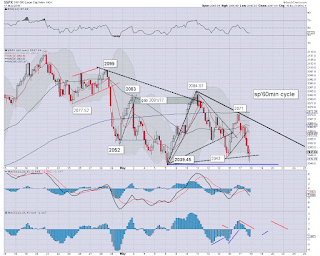 closing hour action: increasing chop, but with a new intra low of 2040.
--

So much for the Monday gains.. almost fully negated.

The rest of this week should get real interesting.

Yes.. opex will usually (85/95%) of the time bode in favour to the equity bulls, but, there are exceptions.

Last week's candle was red.. with a clear spike, and (in theory) a weekly close around the giant psy' level 2K would actually be somewhat natural.
-

With the morning low broken, equity indexes have started to spiral lower. A break of the key sp'2039 low looks very viable before the close/early tomorrow. In either case.. from there.. next target is the 2000/1990 zone. A valid H/S scenario which would offer the 1970/60s... within 3-5 days. 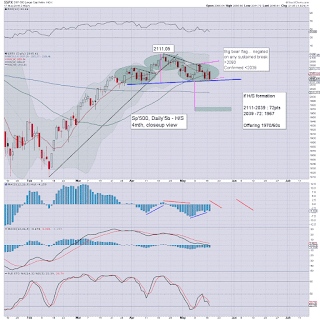 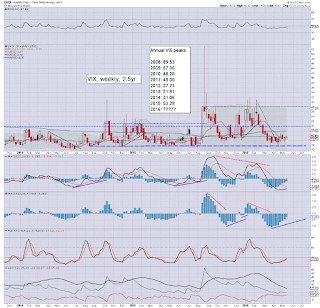 It has sure taken its time, but we are due a bullish cross before end month. By definition, that offers a rather powerful candle.. at least to 20.. if not the 25/30 zone.
--

So... lets see if we can close at the lows... or a little short-covering into the close. Current price action/structure would lean to the former.

In either case... yesterday's nonsense is set to fully negated.
- 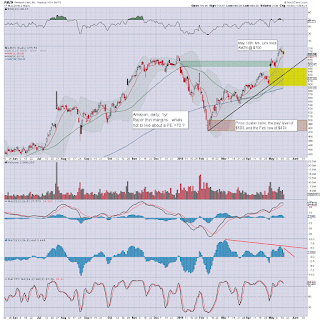 yours.. sarcasm @ 108% and rising.
Posted by Trading Sunset at 19:51:00
Email ThisBlogThis!Share to TwitterShare to FacebookShare to Pinterest

US equity indexes remain moderately weak, with a viable daily close in the low sp'2040s. For now, VIX remains entirely reflective of the broader mainstream that are entirely fearless of the summer ahead. Metals are leaning to the upside, with Gold +$1, and Silver +0.4%. 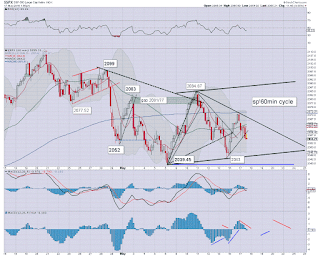 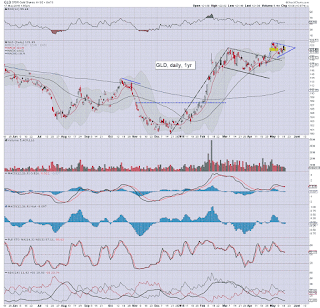 re: metals. It remains the case that broader price action has been inverse to equities since the Dec'2015 low. Price structure is offering a bull pennant/flag, with another lurch higher due in the short term -certainly within 3-5 trading days.

.. if correct. .that bodes bullish for the related mining stocks.
--

As for the broader market... well, its clearly messy, but it looks like we'll see a net daily decline. The issue is whether we'll negate all of the Monday nonsense.. or just part of it.
-- 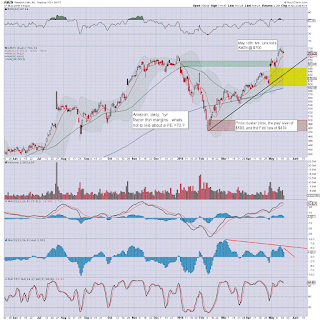 Sub $700s are probable, the ultimate issue is whether the Feb' low of $474 is eventually taken out.
-

In either case.. bulls have a problem.. as the Monday nonsense has been negated.
Posted by Trading Sunset at 18:55:00
Email ThisBlogThis!Share to TwitterShare to FacebookShare to Pinterest

Despite morning price action that was more suggestive of renewed upside, with the morning low of 2055.90 imminently vulnerable... a bearish MACD cross (hourly cycle) is due. VIX is still so far not warning of any notable problems, +2% at 15.00. 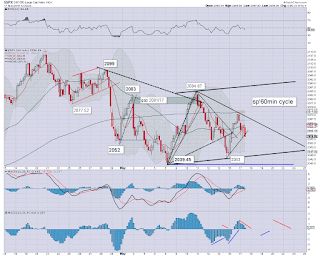 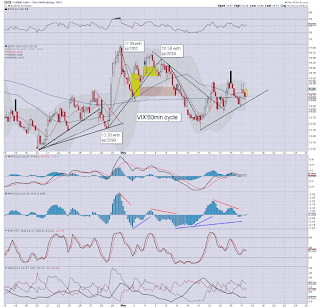 So... at things are.. a bearish MACD cross is due in the 1pm hour.. and by default.. that bodes for a new intra low.. and negates the earlier floor spikes.

In the grand scheme of things though... these are of course.. all relatively minor moves.
-- 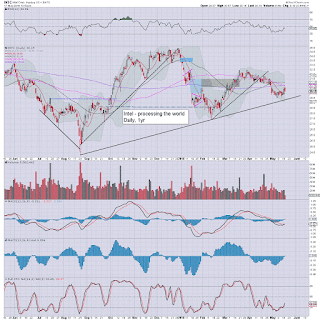 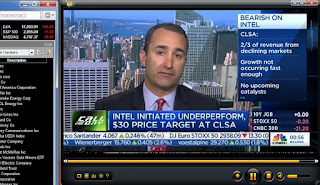 Hmm.. but CLSA did not issue a downside target... merely 'underperform'.
-

12pm update - remaining on the edge

US equities remain moderately weak. The first 3 hourly candles of today are all offering spike floors, which are suggestive of renewed upside this afternoon - with a move to 2085/90 this Wed/Thursday, before next break lower. VIX is effectively flat in the 14s... showing zero market concern. 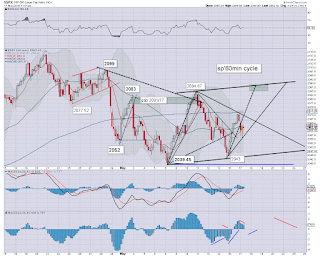 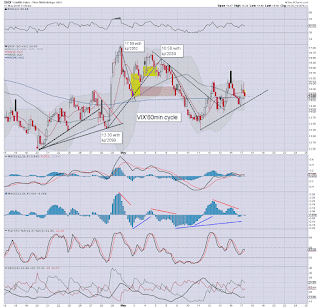 Best guess: considering this mornings floor spikes.. it looks like the market will push upward this afternoon.
-- 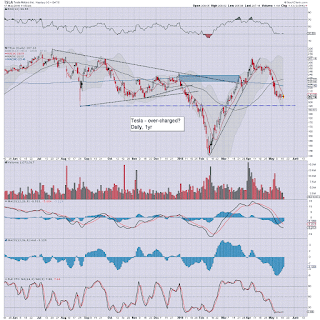 time to see what the cheerleaders are saying on clown finance TV.......
Posted by Trading Sunset at 16:52:00
Email ThisBlogThis!Share to TwitterShare to FacebookShare to Pinterest

Equity price action remains moderately weak. If equity bears can't keep pushing lower, the sp'2085/90 zone will be back on the menu... before next opportunity of a break <2039. Broadly though.. this market has a firm ceiling at the 2100 threshold. 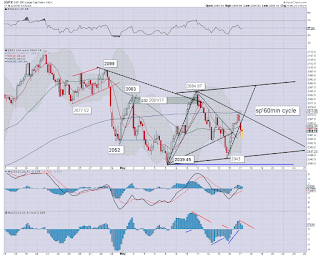 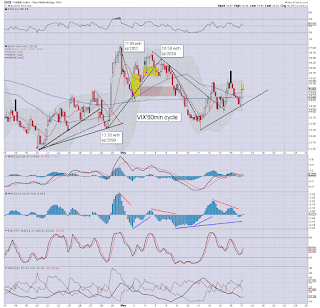 The first two equity hourly candles of the day are offering floor spikes... and that sure doesn't bode well for the bears.

VIX remains broadly subdued, and is clearly still reflecting a market with zero concern of anything in the near term.

Regardless of the short term noise though... the bigger weekly cycles are STILL swinging back in favour to the equity bears. That view only gets negated on a move >sp'2100 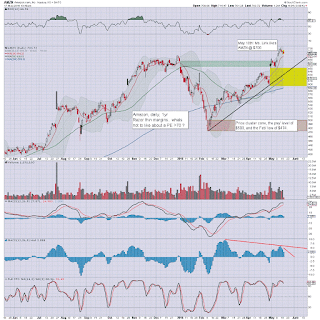 Have added AMZN back to my main watchlist, and will chart it across the summer... as I think it will make for some fine entertainment. I'll be sure to tweet Ms. Link when AMZN breaks the Feb' low.. which seems highly probable at some point this summer/autumn.
--

time to cook
Posted by Trading Sunset at 15:52:00
Email ThisBlogThis!Share to TwitterShare to FacebookShare to Pinterest

10am update - an interesting open

US equities open with some micro chop.. but are seeing some distinct downside action. The hourly equity cycle is offering increasing weakness across the day, but things only get bearish on a break of the sp'2043 low. VIX remains broadly subdued, +2% in the low 15s. 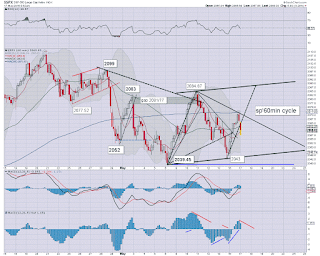 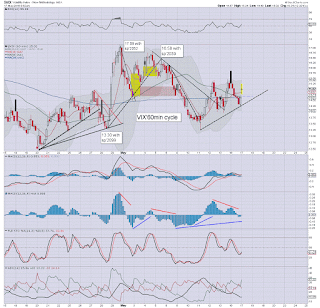 Frankly, its a bit of a mess out there.

There is clearly still threat of renewed upside to 2085/90.

Keep in mind last week's closing weekly candle was red.. with a clear spike.. suggestive that this week will see lower levels (<2039). 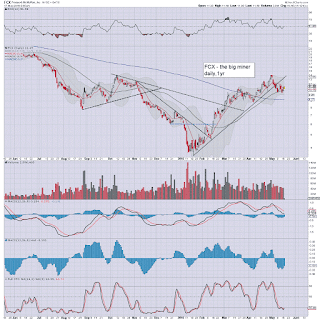 Pushing against the main market.. higher for a second day... but the April high of $14.06 should comfortably hold. There is little reason why FCX won't see renewed weakness into the summer. I'd refer anyone to the monthly chart for Copper.

stay tuned!
Posted by Trading Sunset at 14:55:00
Email ThisBlogThis!Share to TwitterShare to FacebookShare to Pinterest 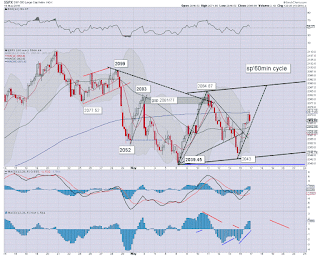 However you want to measure it... Mr Deflation is out there.. and that scares the hell out of the central bankers, as their 'game' requires a net monetary increase each year in order for things to not implode.

It should be clear to most.. that mainstream chatter about 'QE-Heli' money is itself increasing... and it appears inevitable that it will be tried.... probably starting in Japan or the EU.
-

In many ways... a more important question is whether May will settle above or below the psy' level of 2K.

... the bigger weekly cycles would suggests under.

I've watched most of the 1469 videos that Oscar has posted... and this ranks as one of the top ten. It is balanced, and with a very valid focus on the broader price structure in equities... and the price action in Gold (which also applies to Silver, and the related miners).

If the market does unravel... I shall hope the mainstream (Fox business?) give him some credit for correctly calling it

Housing starts data was mixed... and despite an improvement in April... the March number was revised even lower to -9%.
Posted by Trading Sunset at 13:09:00
Email ThisBlogThis!Share to TwitterShare to FacebookShare to Pinterest

The week began on a significantly positive note, with the sp'500 settling +20pts (1.0%) at 2066.66. Somewhat understandably, some of the cheerleaders are again looking to much higher levels by year end. Yet, the market remains broadly stuck since the May'20th high of 2134.72. 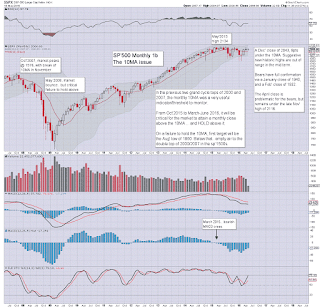 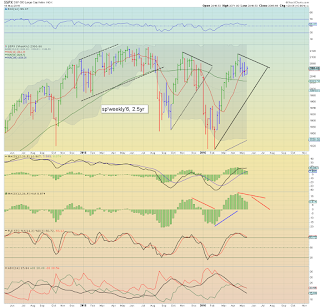 *note a fourth blue candle on the weekly 'rainbow' chart. Equity bulls should be at least somewhat concerned that mid term momentum to the upside has indeed completely stalled - much like Nov/Dec' 2015.
--

What should be clear - even to the most bullish of maniacs, unless we see a clear break >2134, there should be serious concern that the market will be highly vulnerable to another wave lower.

Whether you aleady believe that could be caused by an adverse BREXIT voting outcome, underlying lousy earnings/growth.. or some spurious geo-political event, it really doesn't matter right now.

What does matter is that there is a broad array of problems... any of which would be a valid excuse to whack the US - and other world markets, lower by around 20%.

*Fed officials Williams/Lockhart are speaking together at a Politico event around 12pm, with Kaplan an hour later.
-- 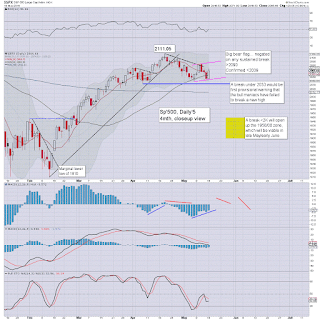 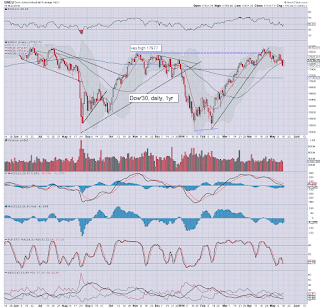 *note a viable large bear flag (sp' daily chart.. pink). Even if its just part of an ABC correction... it would still offer the 2010s within the next week or two.
--

A day for the equity bulls, but broadly... the market remains stuck in a relatively narrow trading range - much like spring/early summer 2015.

A major break to the downside... rather than another push into the 2100s remains the far higher probability.
--