VIX lower for a seventh day

With equities continuing to climb, the VIX naturally continues to slip. This was a notable seventh consecutive daily decline for the VIX (close to a record?), settling -4.0% @ 13.57   Across the week, the VIX declined by a very significant -11.2% . 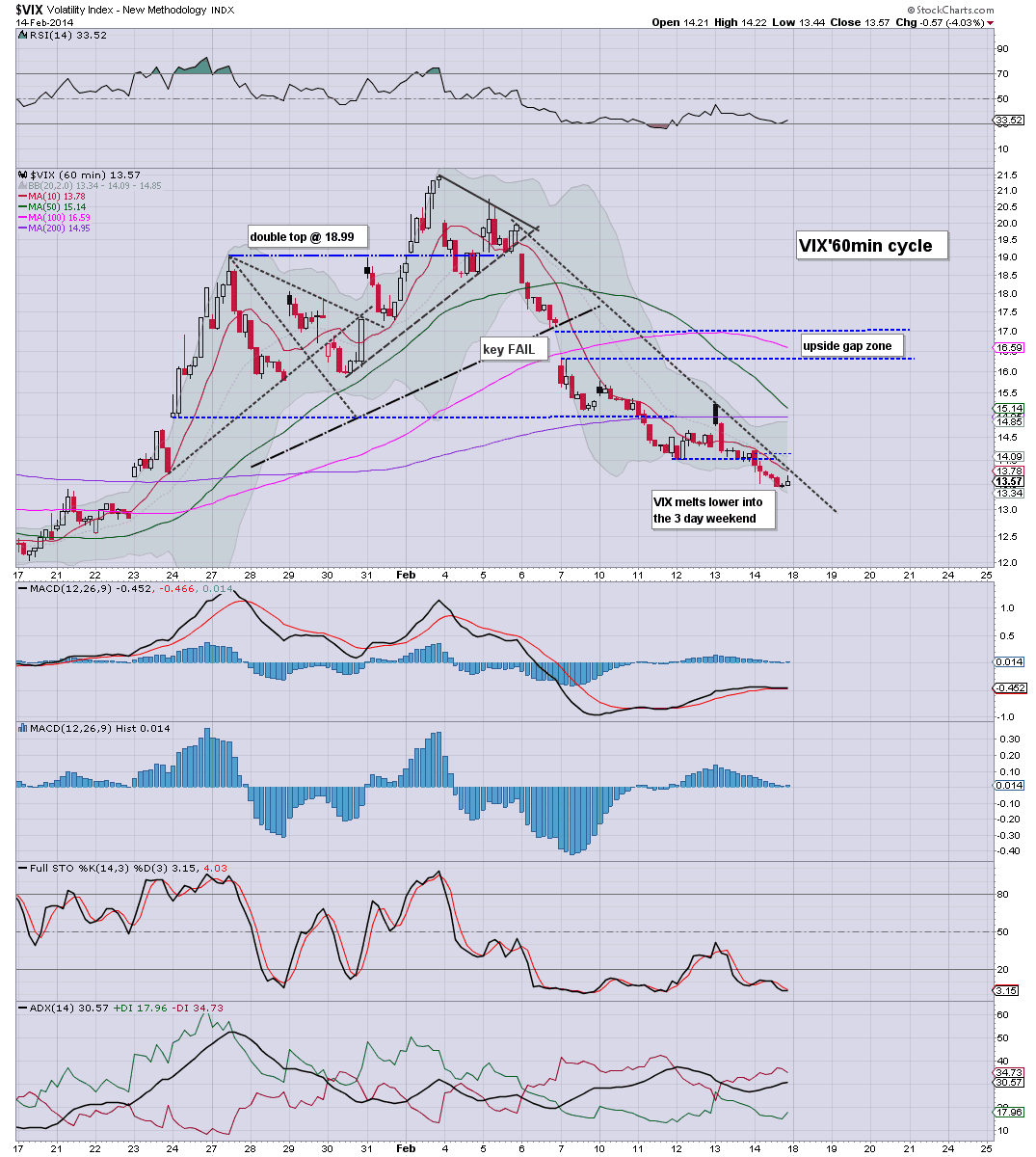 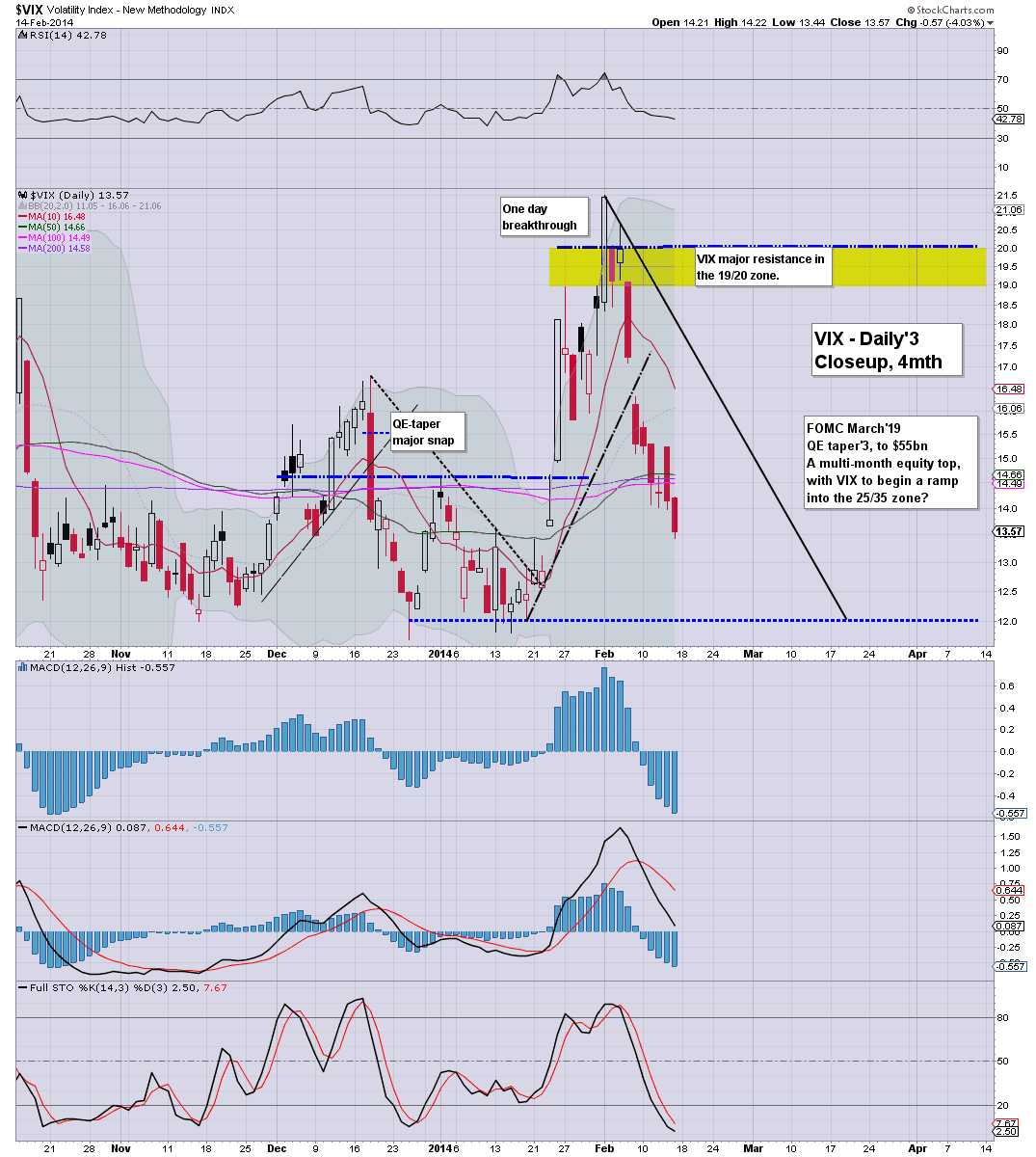 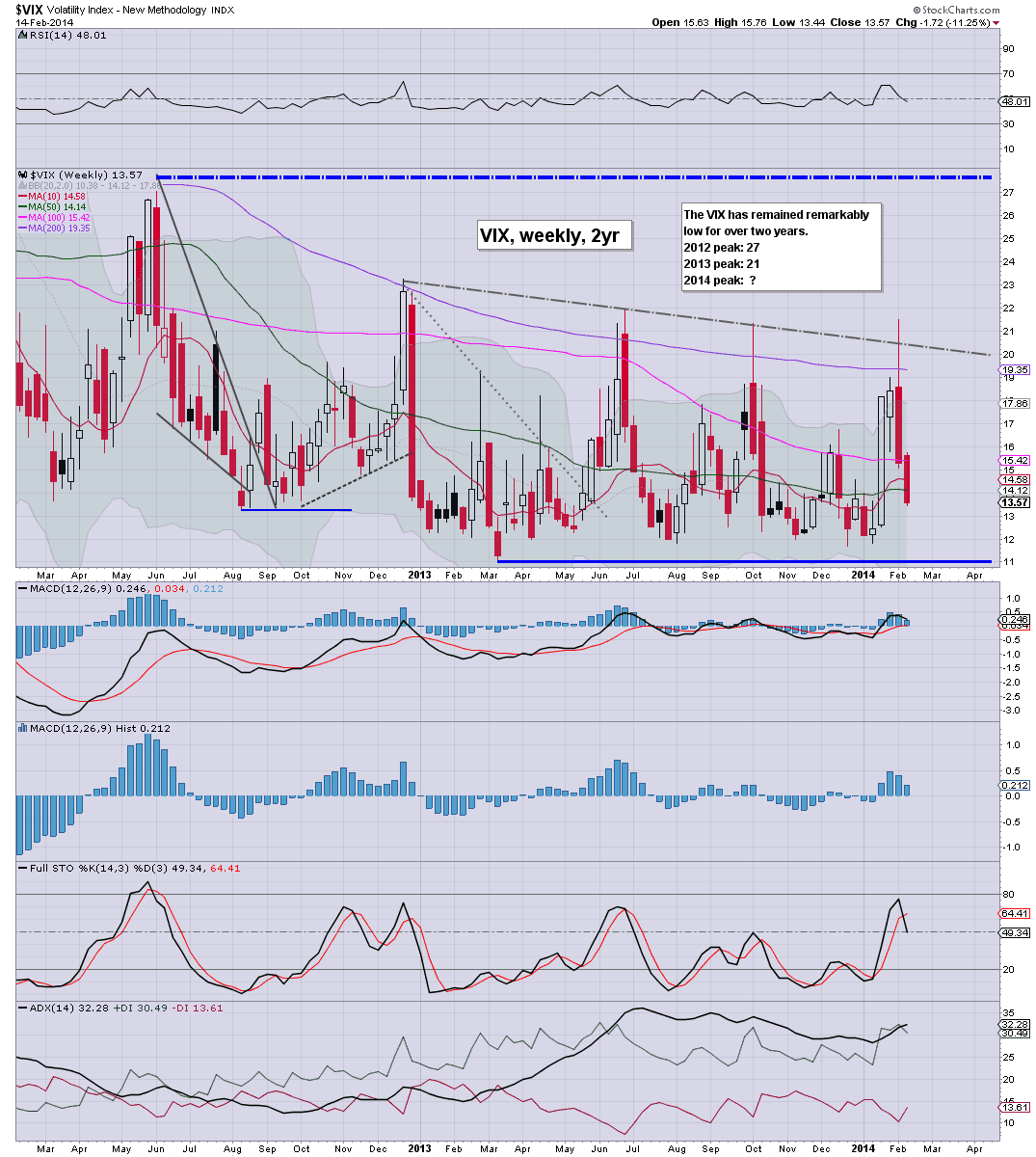 Last weeks giant red candle has been confirmed with a further significant decline.

Based on previous cycles, the VIX will likely remain low for at least another 4-6 weeks.

*if anyone knows what the record for consecutive daily declines on the VIX is, let me know! I have to wonder, if equities rally on Tuesday, with the VIX lower for an eighth day, that would probably be a record.
--

US indexes closed the week with further gains, sp +8pts @ 1838. The two leaders - Trans/R2K, settled higher by 0.3% and 0.1% respectively. Near term outlook is bullish across next week, if not most of March. VIX confirmed a market that is now very comfortable with a new Fed chair. 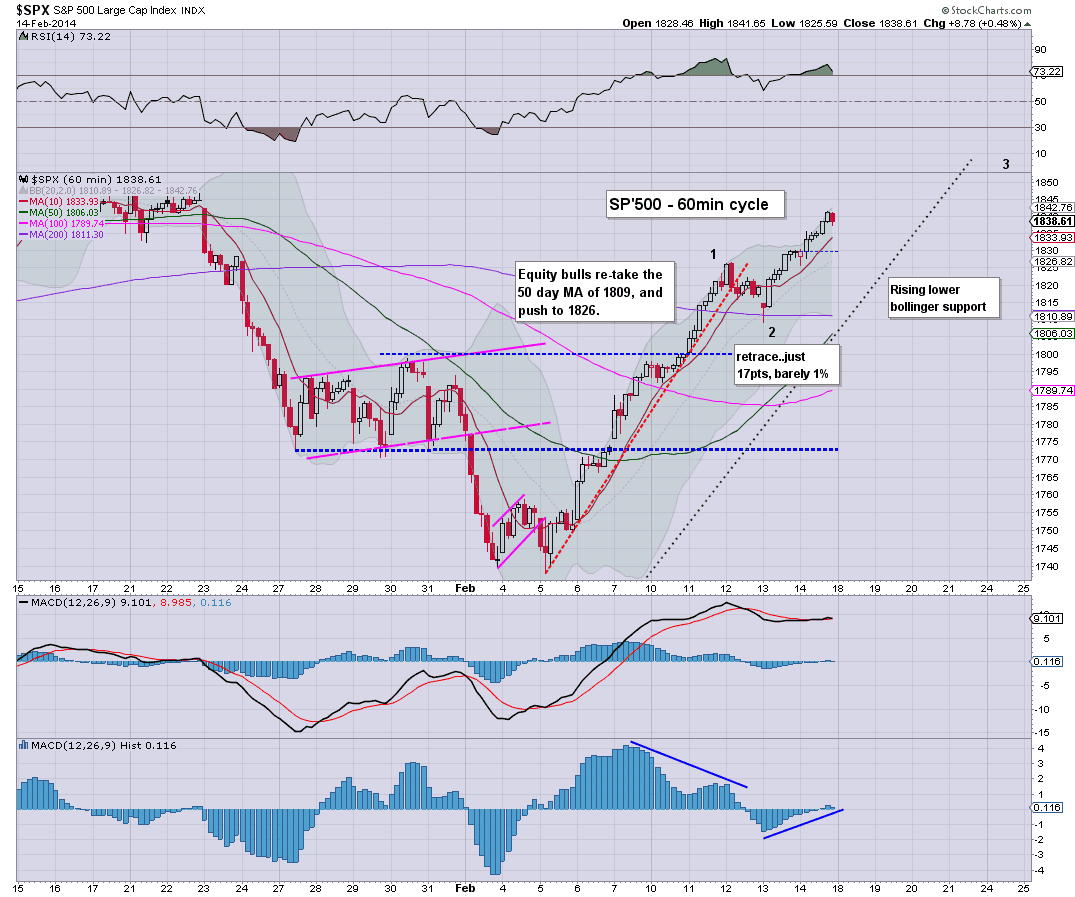 The bulls got the follow through from last weeks turn, with 1737, now over 100pts lower...amazing!
-

Have a good..and long weekend everyone.
--
*the weekend post will be on the US weekly indexes
Posted by Trading Sunset at 21:02:00
Email ThisBlogThis!Share to TwitterShare to FacebookShare to Pinterest

The sp'500 is set to close the week with net gains of around 2.4%. The weekly green candle on the 'rainbow' (elder impulse) chart is absolute confirmation that last week was indeed a turn - with a blue candle. Simply put....there are more green candles coming, taking us into mid/late March. 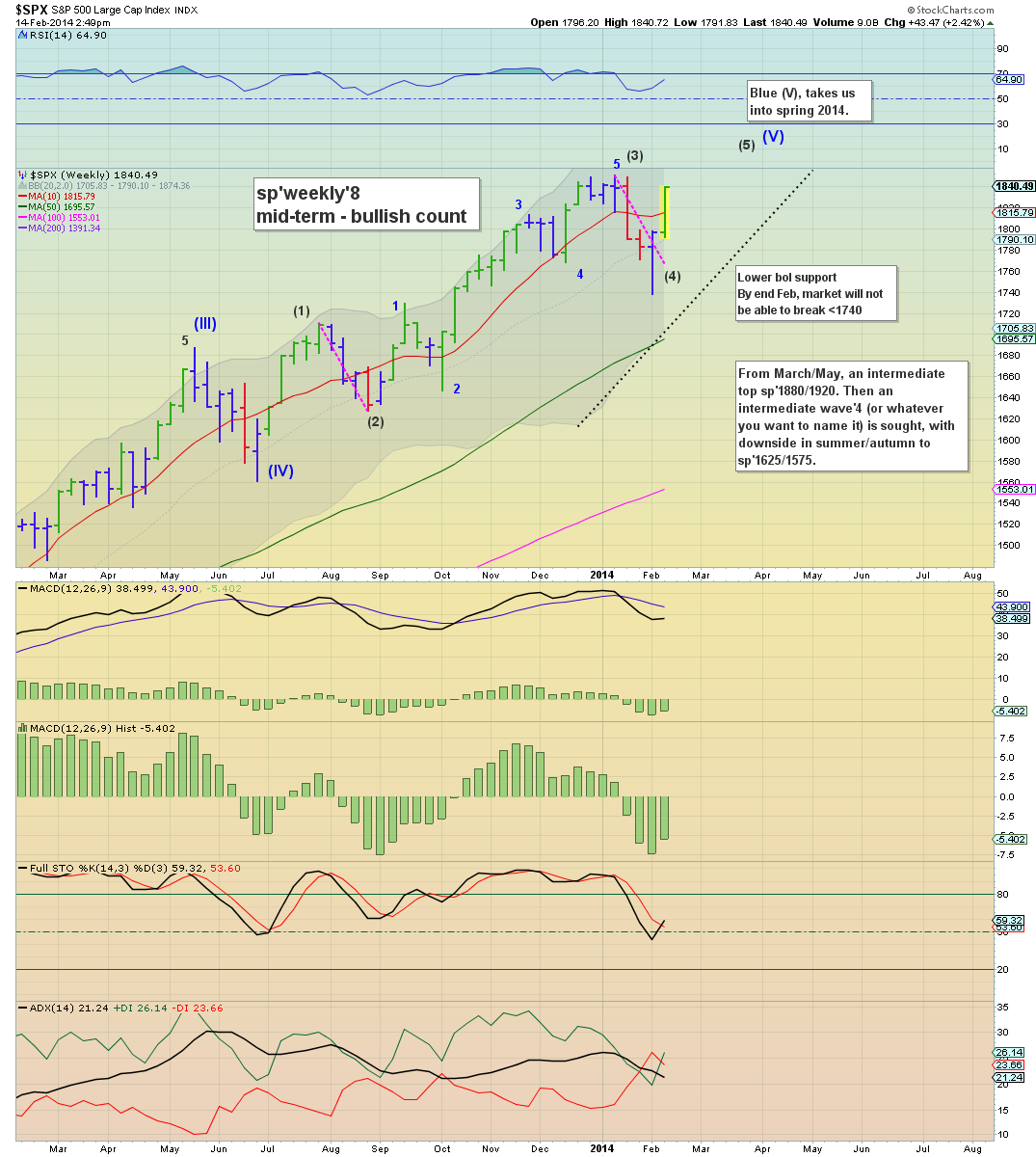 Chart weekly'8 has been - to my own surprise, correct since last summer.

For those regular readers out there.. you will know my original outlook was for 'broad upside into late spring 2014'.

Well, we ain't got much longer to wait. Another 4-6 weeks..and this nonsense might be finally wrapped up - at least for a few months.
--

back at the close.
Posted by Trading Sunset at 19:51:00
Email ThisBlogThis!Share to TwitterShare to FacebookShare to Pinterest 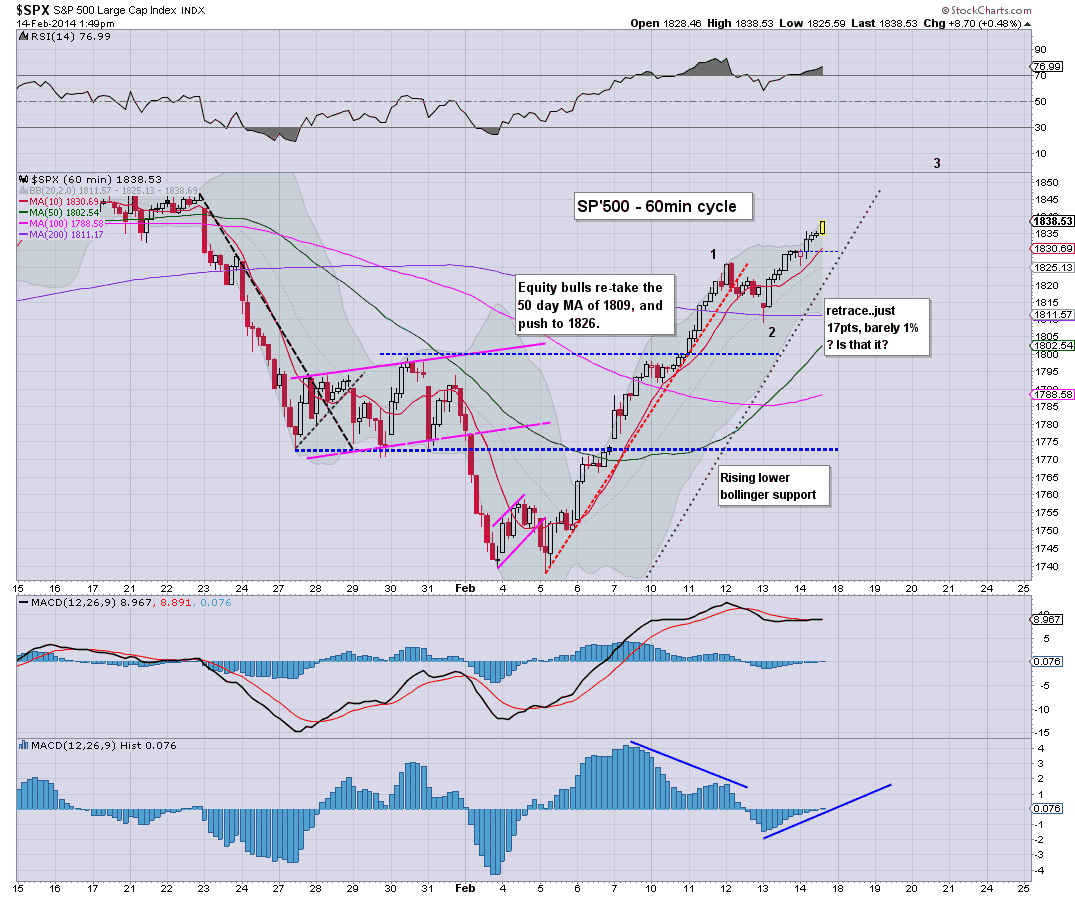 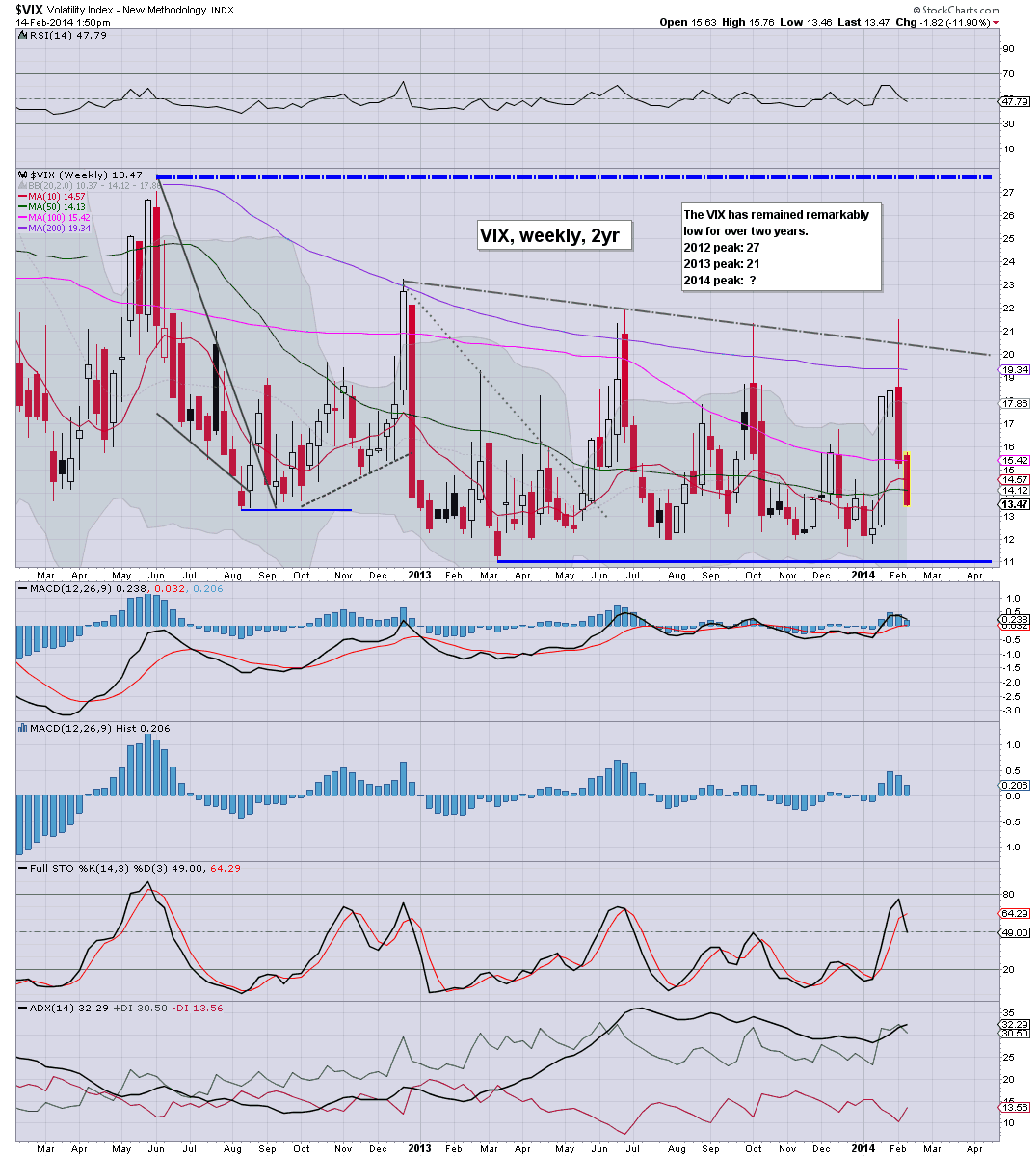 *a reminder on the vix weekly. Again, useful to note the resistance at the 200 weekly MA, and last weeks giant red candle was a clear warning that we have probably maxed out on the VIX for around 4-6 weeks.
--

A very slow day..and in many ways, I'm delighted we have a long 3 day weekend ahead.

I for one...need a break

back at 3pm.
Posted by Trading Sunset at 18:50:00
Email ThisBlogThis!Share to TwitterShare to FacebookShare to Pinterest

1pm update - a strong week for equities and precious metals

Regardless of the rest of the afternoon, the weekly closes for US equities and the precious metals are powerfully bullish. There will likely be significant follow through to the upside next week, and probably across much of March (at least until the next FOMC - March'19). 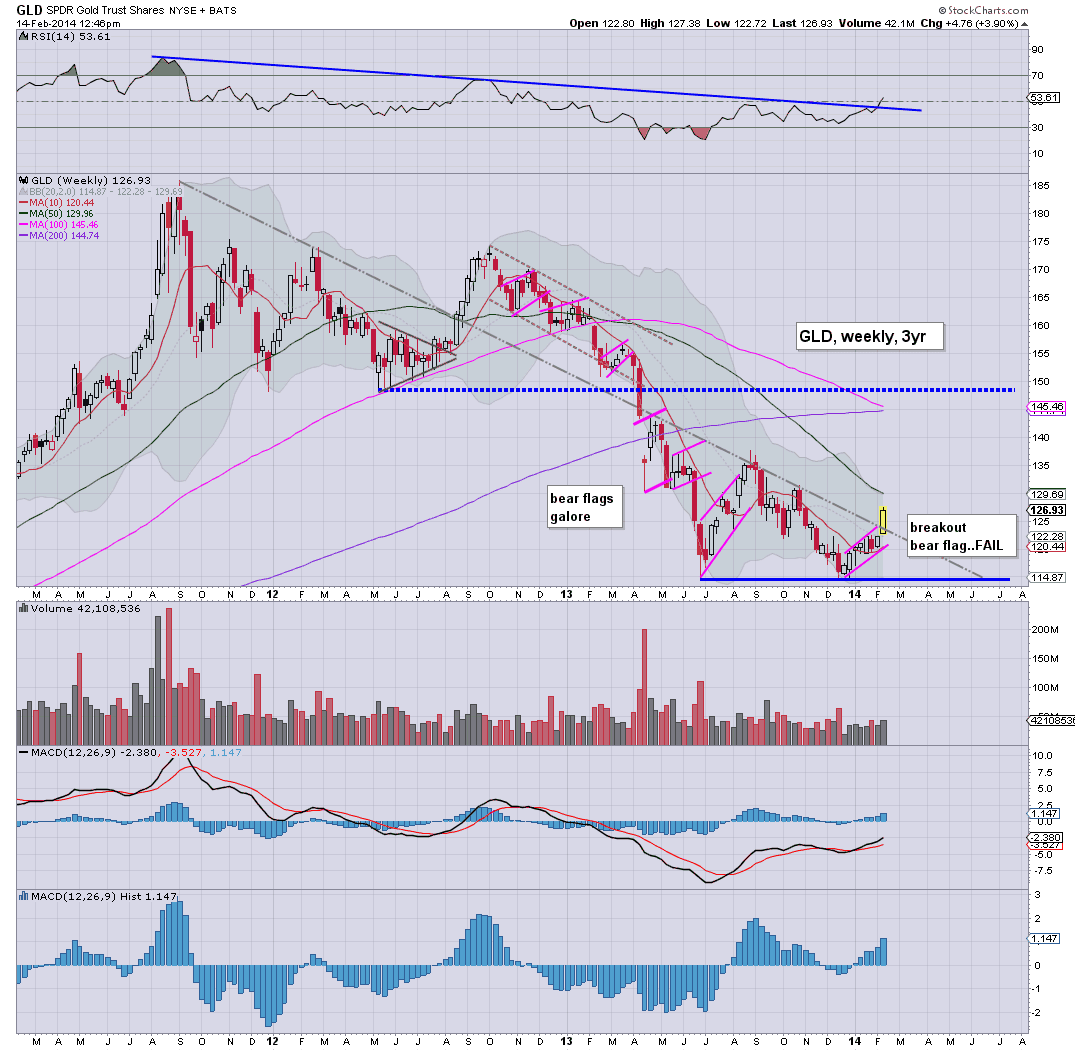 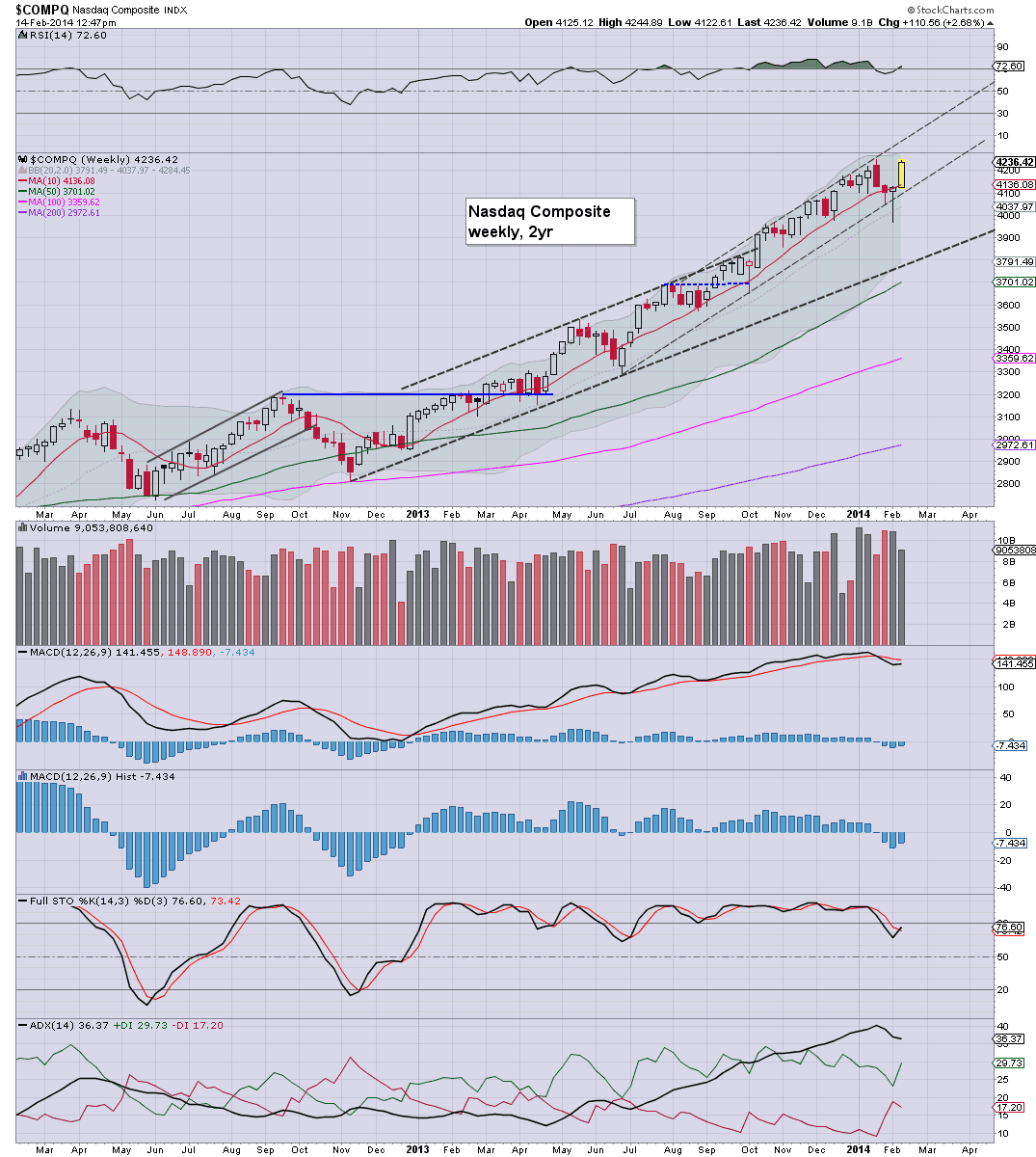 Rains, winds..snow...it seems much of the USA/UK is taking a bit of a battering.

This weather is clearly an excuse for everyone to just go home early, and thus no reason why rest of the day won't be continued micro moves...with a slight bias to the upside. I won't be going anywhere though. Here to the end..as ever.

Seemingly, a weekly close in the sp'1830s..with VIX 13s.
--
quiet afternoon...back at 2pm.
Posted by Trading Sunset at 17:49:00
Email ThisBlogThis!Share to TwitterShare to FacebookShare to Pinterest

Equities are generally holding moderate gains, with the sp'500 in the mid 1830s..almost a clear 100pts above the level of 8 trading days ago. Metals and the miners are holding significant daily/weekly gains. VIX is merely melting lower into the long weekend. 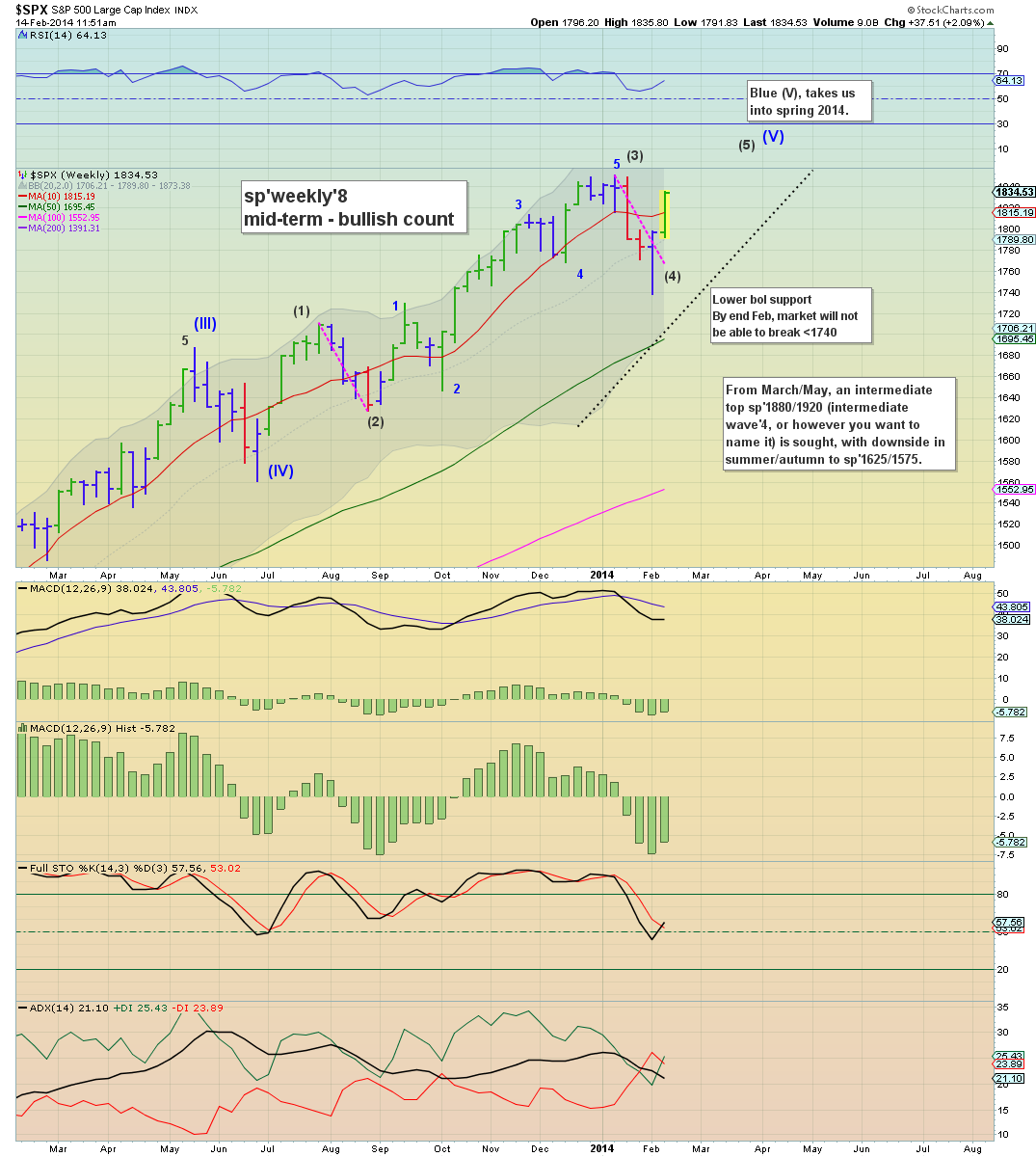 *were the skies clear (its still floods here) I'd be able to see a grand valentines full moon rising over the city.
-

Not much to add right now. I think anyone considering any index shorts - or VIX longs, needs to go stare at the weekly'8 chart for the rest of today.

It is probably fair to guess we have at least 2-3 green candles to follow, perhaps a few more than that. Broad upside into the FOMC of March'19..seems likely.
--

--
time for lunch !
Posted by Trading Sunset at 16:53:00
Email ThisBlogThis!Share to TwitterShare to FacebookShare to Pinterest

With a long 3 day weekend ahead, the market is pretty quiet, and that is allowing the old 'algo bot melt' situation to occur. A weekly close in the sp'1830s looks very likely, and there is now a viable opportunity for the market to gap into new highs at the Tuesday open. 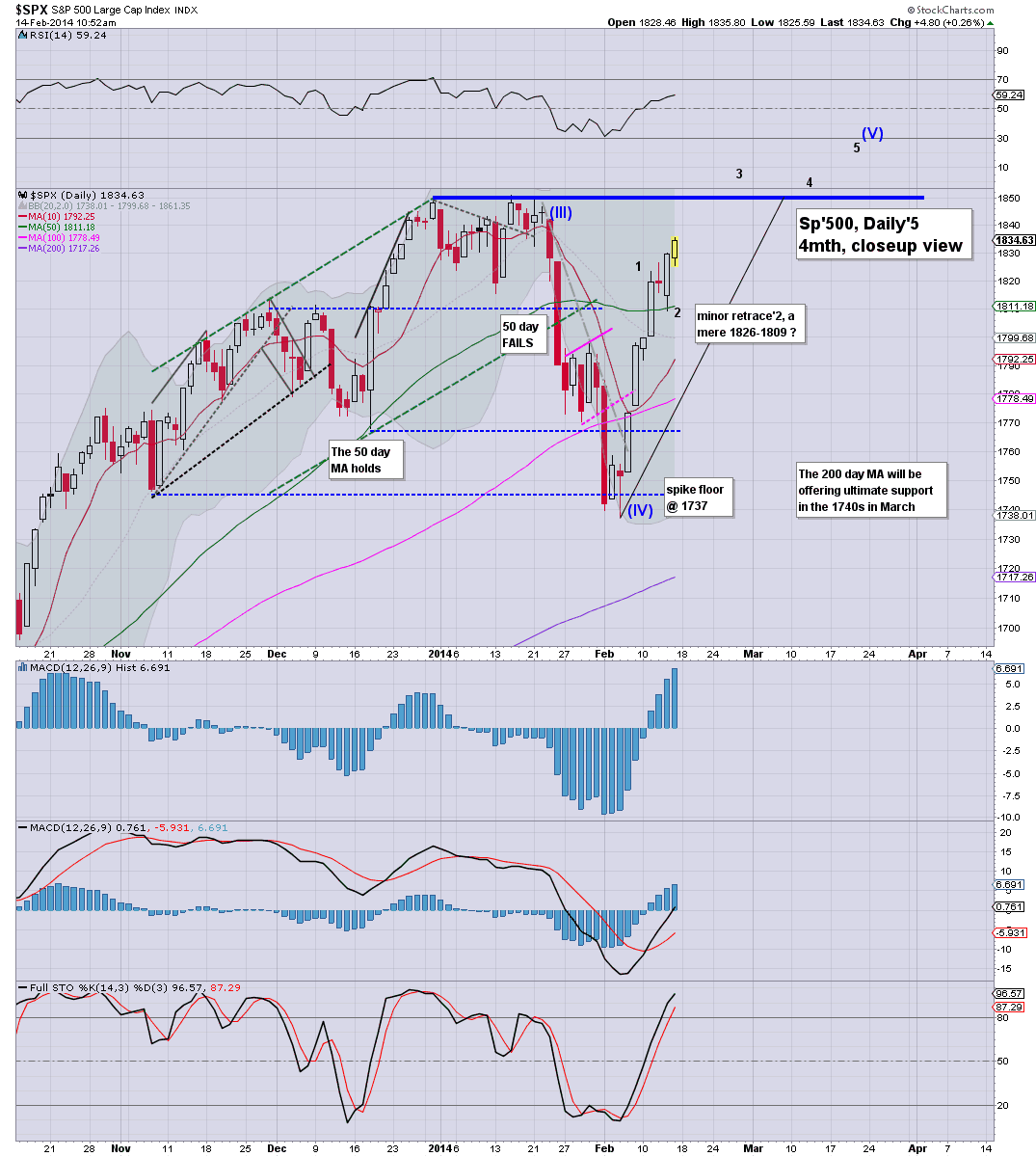 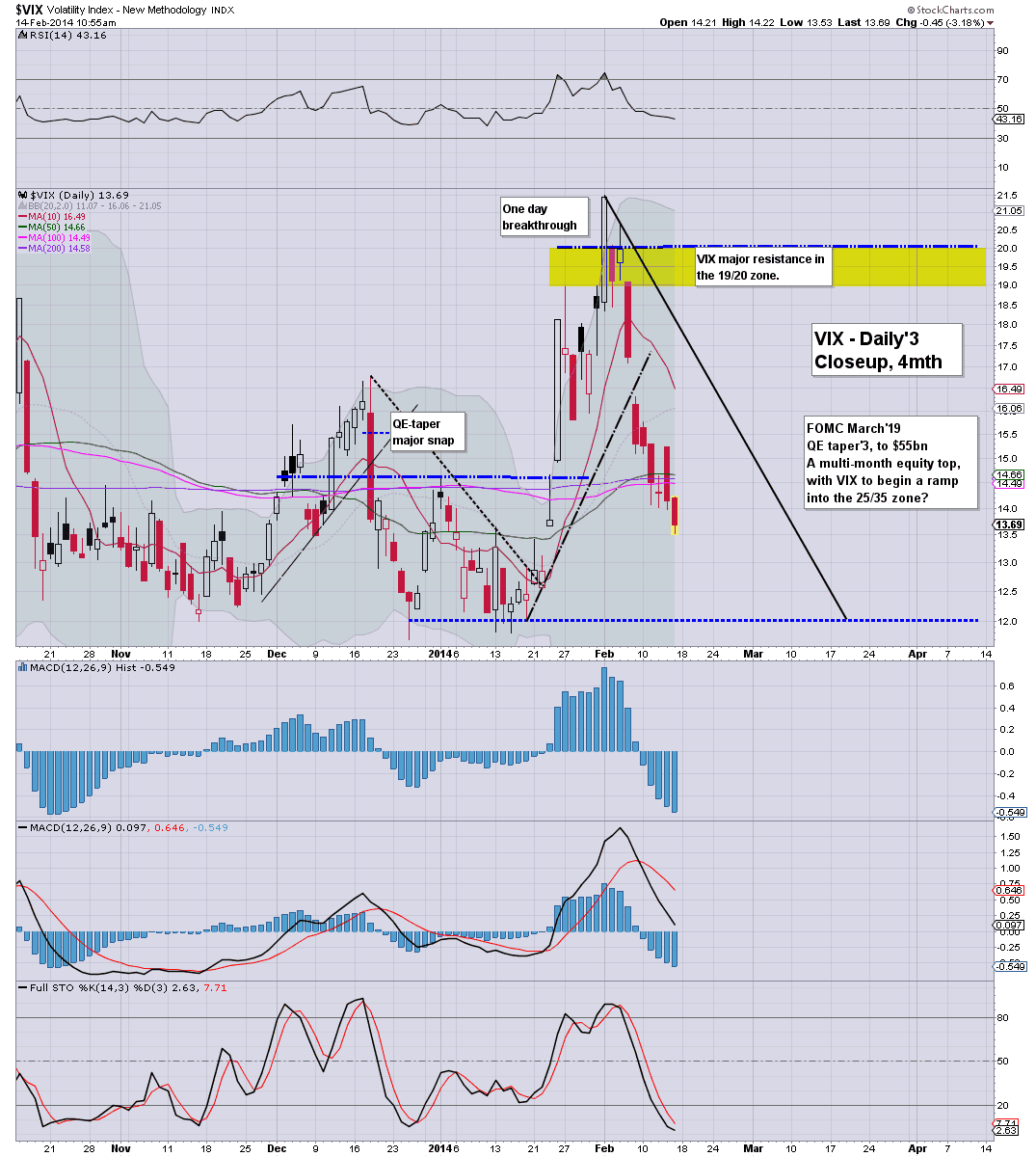 Pretty quiet end to the week....

Precious metals and the mining stocks are going to close with powerful weekly gains...more on that later.
--
VIX is naturally in melt lower mode, the seventh consecutive daily decline (I'm not sure what the record is).

A weekly close in the low 13s looks likely. I suppose the might be able to hammer it into the 12s in the closing minutes, not that it matters much. The recent high of 21..now looks a very long way up.
Posted by Trading Sunset at 15:54:00
Email ThisBlogThis!Share to TwitterShare to FacebookShare to Pinterest

10am update - metals and miners on the climb

The indexes open a touch lower, but the market is comfortably holding net weekly gains. Sp'500 looks set to close in the 1830s. Metals are strongly higher, Gold +$17, Silver +3.6%. The miners are naturally reacting, GDX +2.7%. 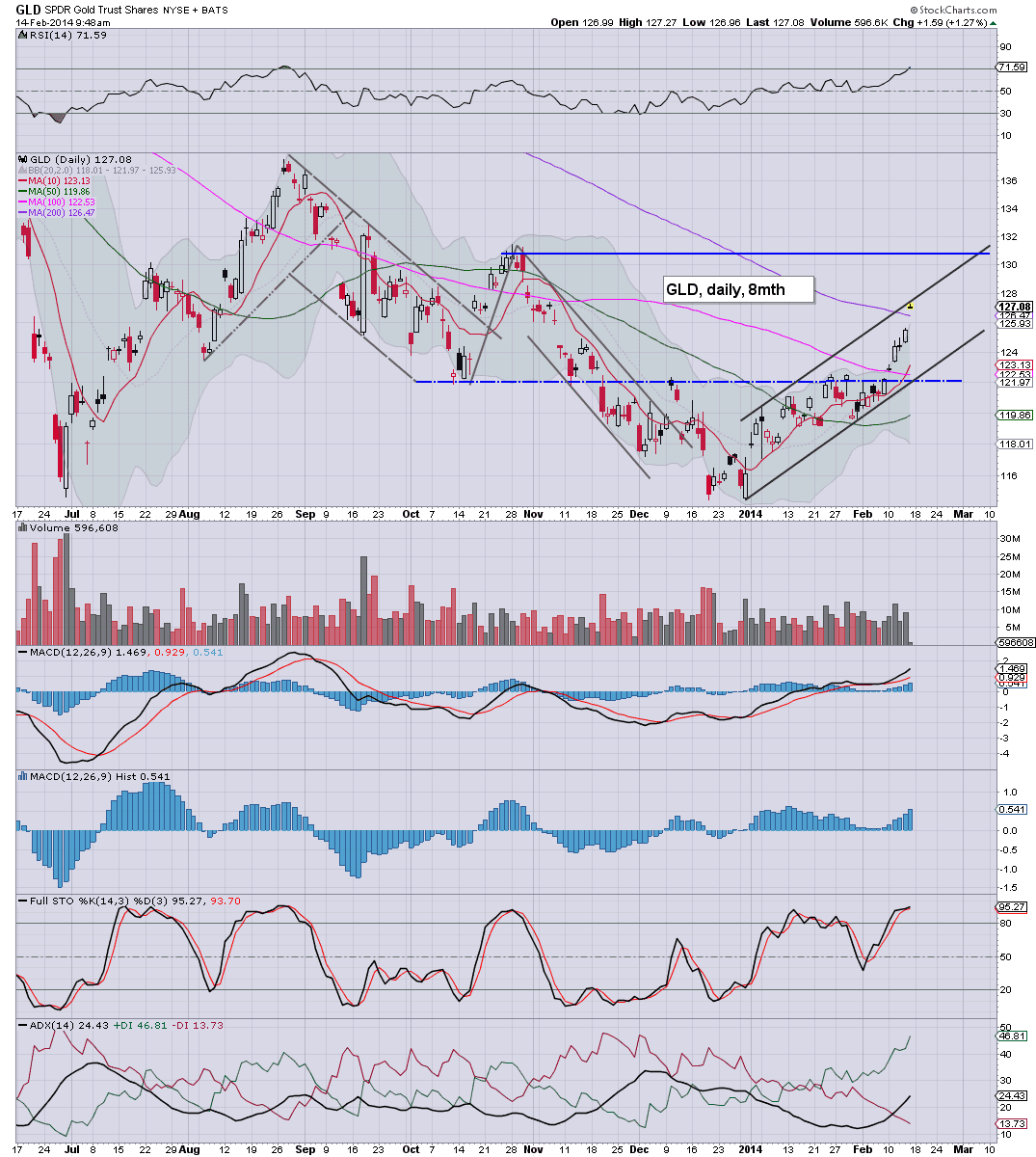 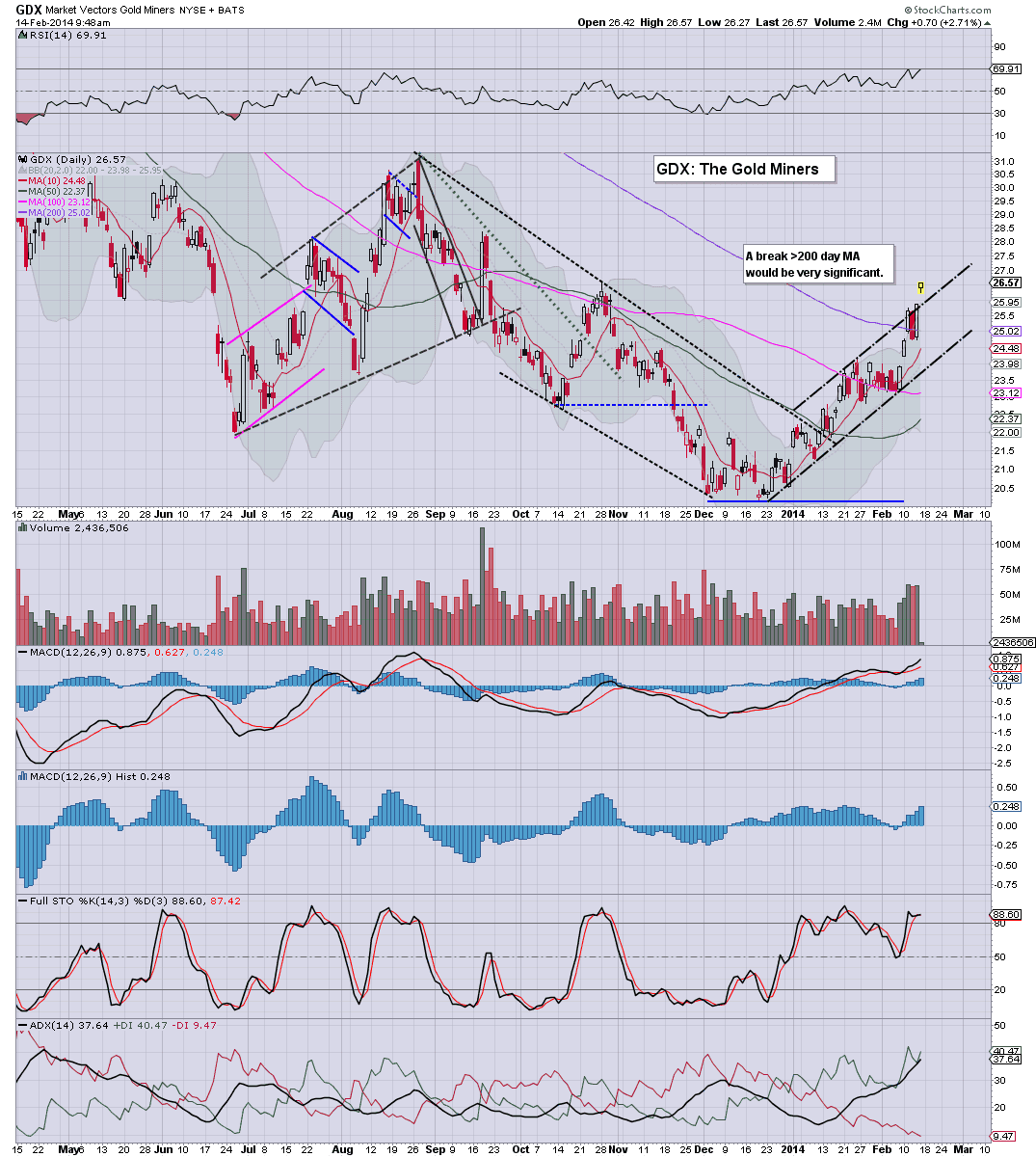 *not much to note on the indexes, and with real action in the metals and the miners, I'll start the day with them.
-

Interesting to see clown finance TV discuss the metals/miners...the mainstream is following the script..right on schedule.

10.20am...new multi-day highs...there is little reason we won't close somewhere in the 1830s..which - as many recognise, will make for one hell of a strong weekly candle.

To the bears out there..just another 4-6 weeks to go...is my best guess.
Posted by Trading Sunset at 14:50:00
Email ThisBlogThis!Share to TwitterShare to FacebookShare to Pinterest 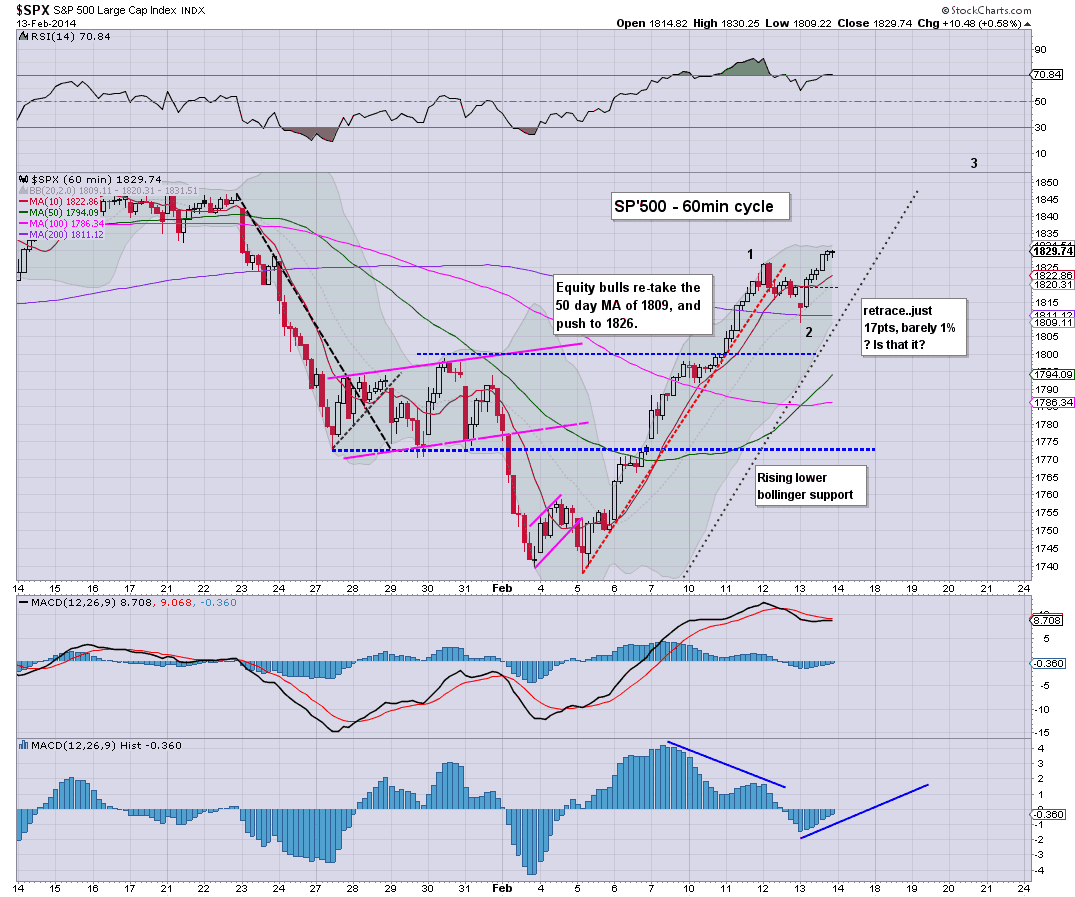 *Gold is set to open above the 200 day MA, for the first time since Jan'2013. With the miners having also closed above the 200 MA twice this week, it is a very important week for the gold bugs out there.
--

*Awaiting a trio of econ-data this morning.

Equity bulls should be content with ANY close >sp'1815 (weekly 10MA), and that does appear likely. I certainly can't see a sig' daily decline today.

GDX +2.4%, with Gold +$16
Posted by Trading Sunset at 13:28:00
Email ThisBlogThis!Share to TwitterShare to FacebookShare to Pinterest

Lets get this over with 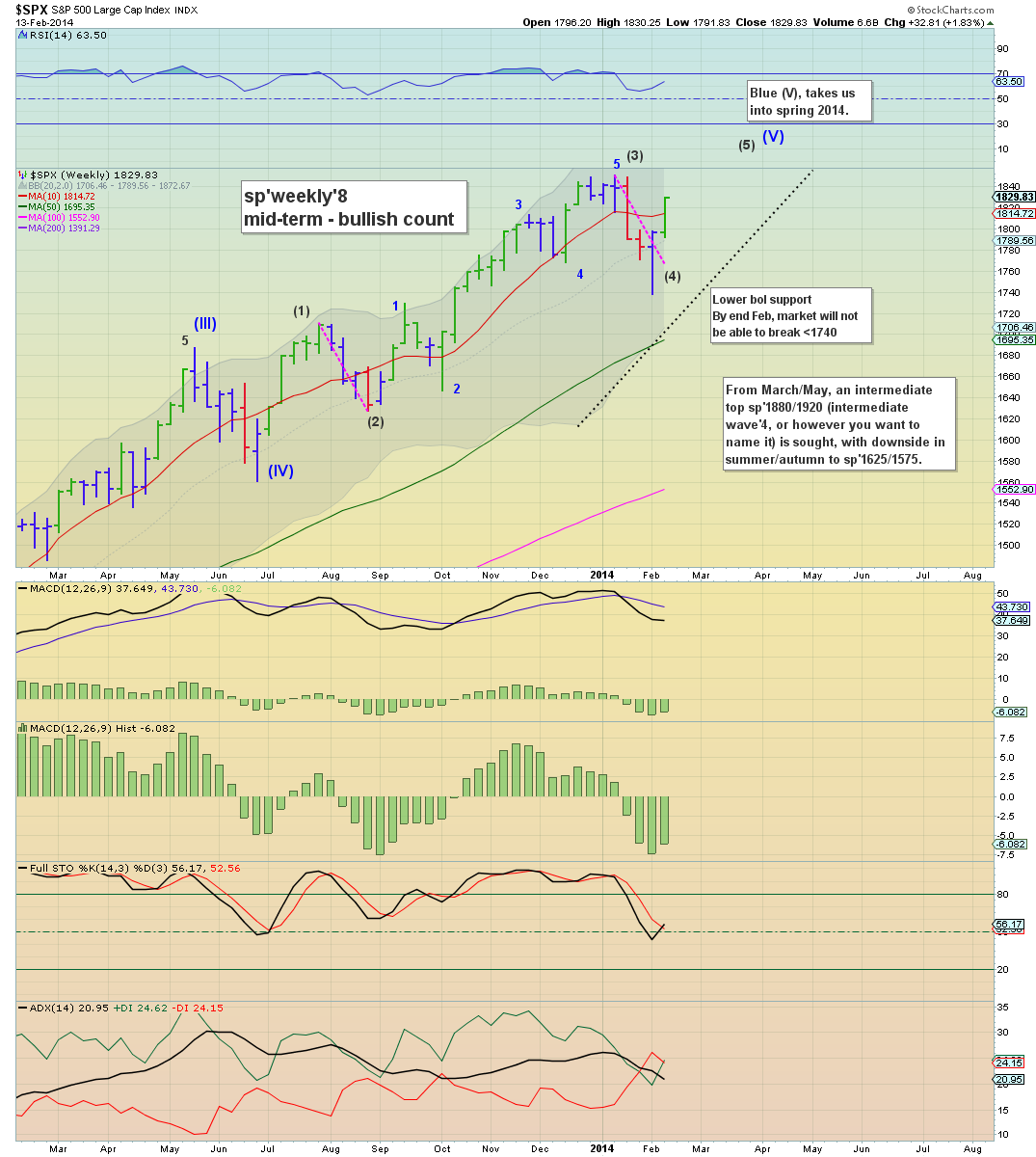 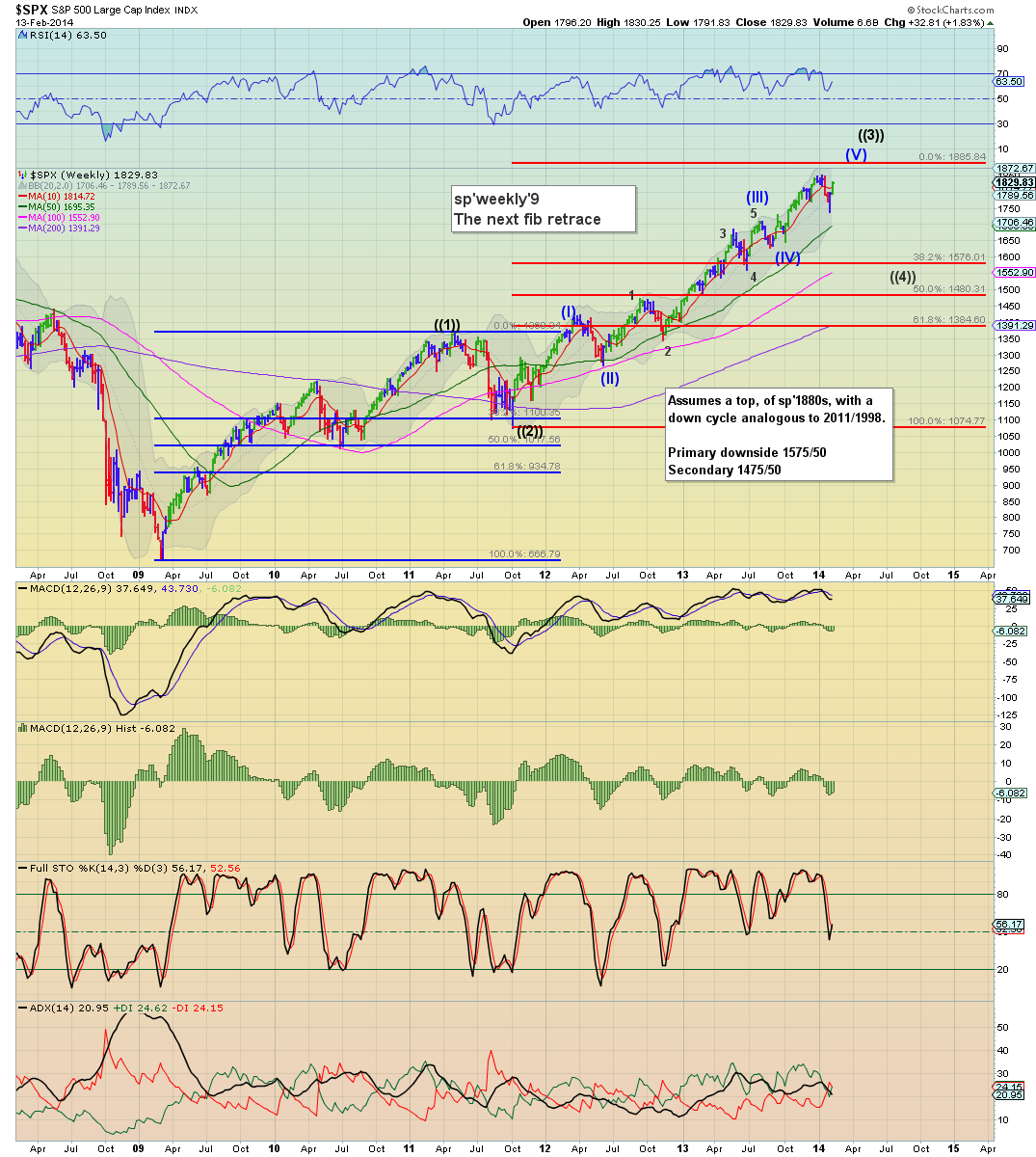 The weekly 'rainbow' charts sure look powerfully bullish. The 1737 low is almost a clear 100pts lower, and we're well within reach of breaking new historic highs. Equity bulls should be content with any Friday close >1815, and frankly, that now looks a relatively easy target.

Such a weekly close will confirm last week as a turn (blue candle), with this weeks green candle. Best guess...at least 2-3 more green candles, taking us into the 1880/1920 zone by late March/early April.

It remains possible we'll see a key top around the next FOMC of March'19, when QE taper'3 will likely be announced.

We have a trio of econ-data to conclude the week. Import/export prices, industrial prod', and consumer sentiment. The latter two might be enough to kick the market into the 1840s if Mr Market remains in 'hyper' bullish mood.


Bears still having to be patient

The ramp in late 2011 was expected..and indeed..follow through into late spring 2012 was also understandable. Yet..here we are, over 18mths beyond that point, and we're still broadly climbing.

I'm beyond tired of waiting for a conclusive rollover on the weekly AND monthly charts. The recent failure to hit the lower weekly bollinger (which I will keep highlighting) was indeed a major sign that 1850 was NOT a key top, and will surely be surpassed.

I'll be more than pleased once we get into late March/early April. Perhaps then, finally.. this giant wave (whether you want to call it a 3, C, X, Y,..or even 'wave of delusion', will be complete...and over with!

**tomorrow is valentines day...with a full moon, that can only end well, right? 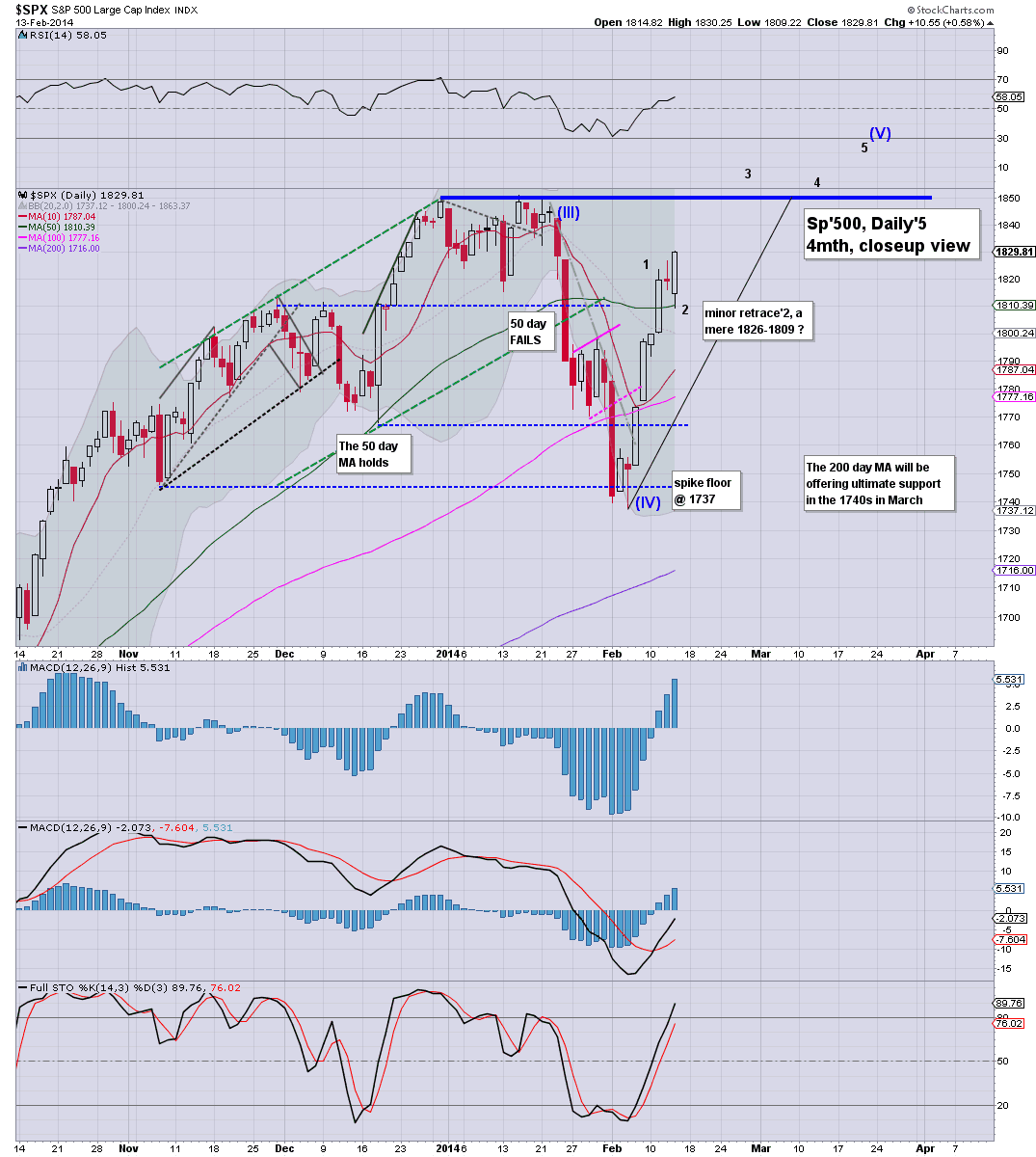 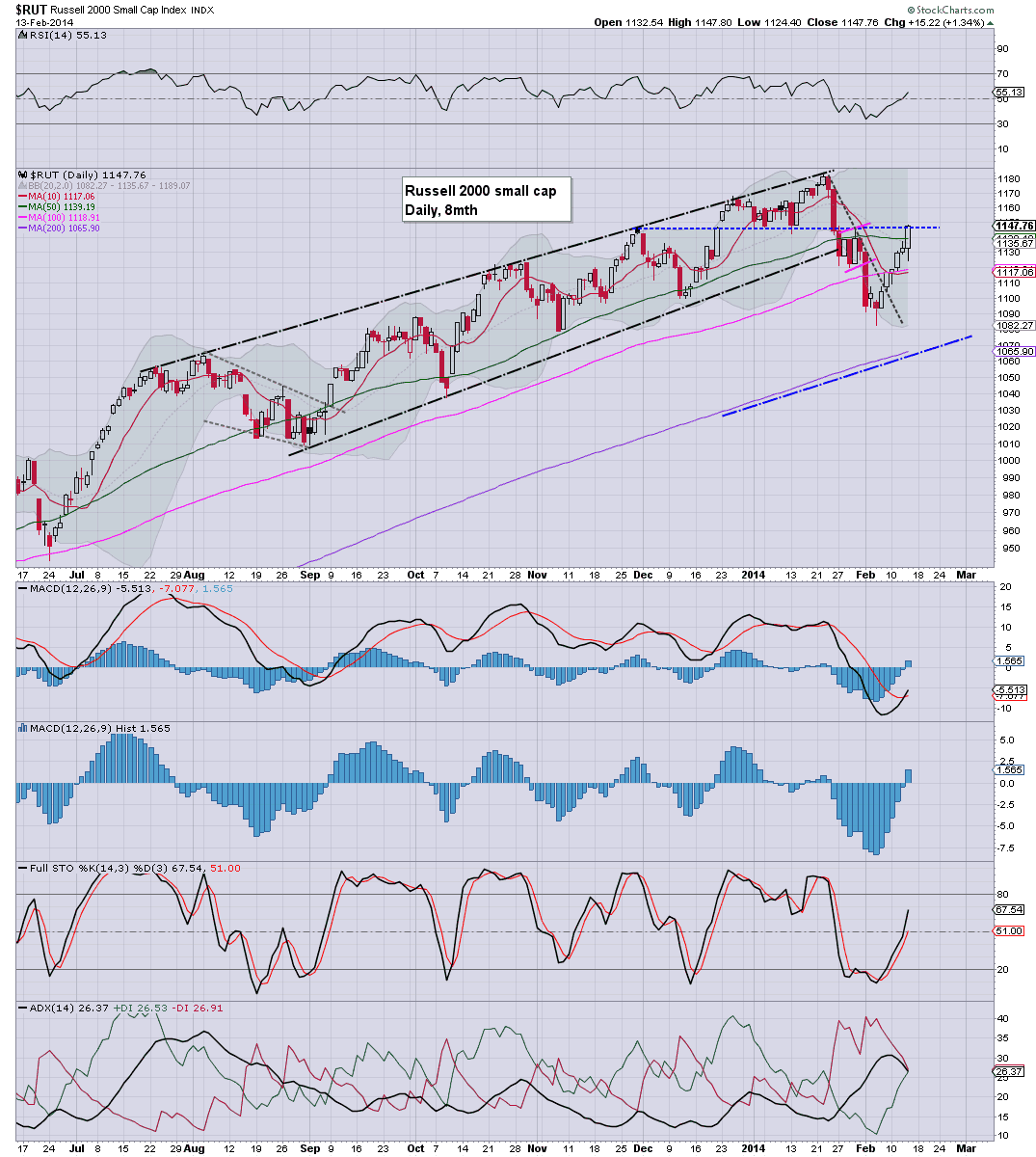 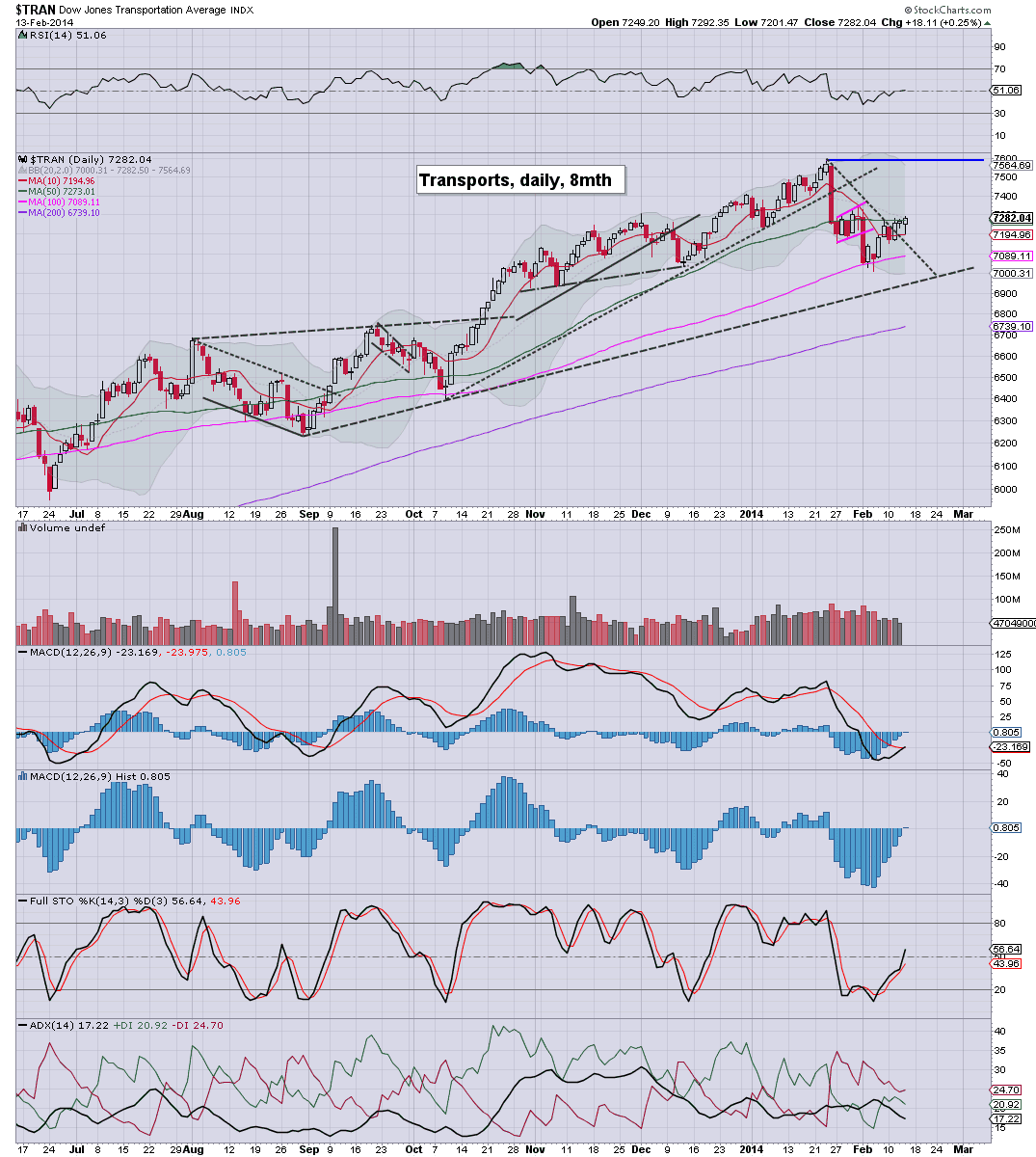 What to say about today's nonsense?

The gap lower was kinda interesting, but there just wasn't any significant power behind it, and with the daily/weekly cycles all pushing upward, the bears got ground down across the day.

Equity bulls should be especially impressed with the markets resilience, since it was another QE-less day.
--