With US equities closing somewhat mixed, the VIX held onto fractional gains, settling +0.7% @ 12.11. Near term outlook is for the VIX to remain within the 14/10 zone. Across the week, the VIX declined by a rather significant -8.9%. 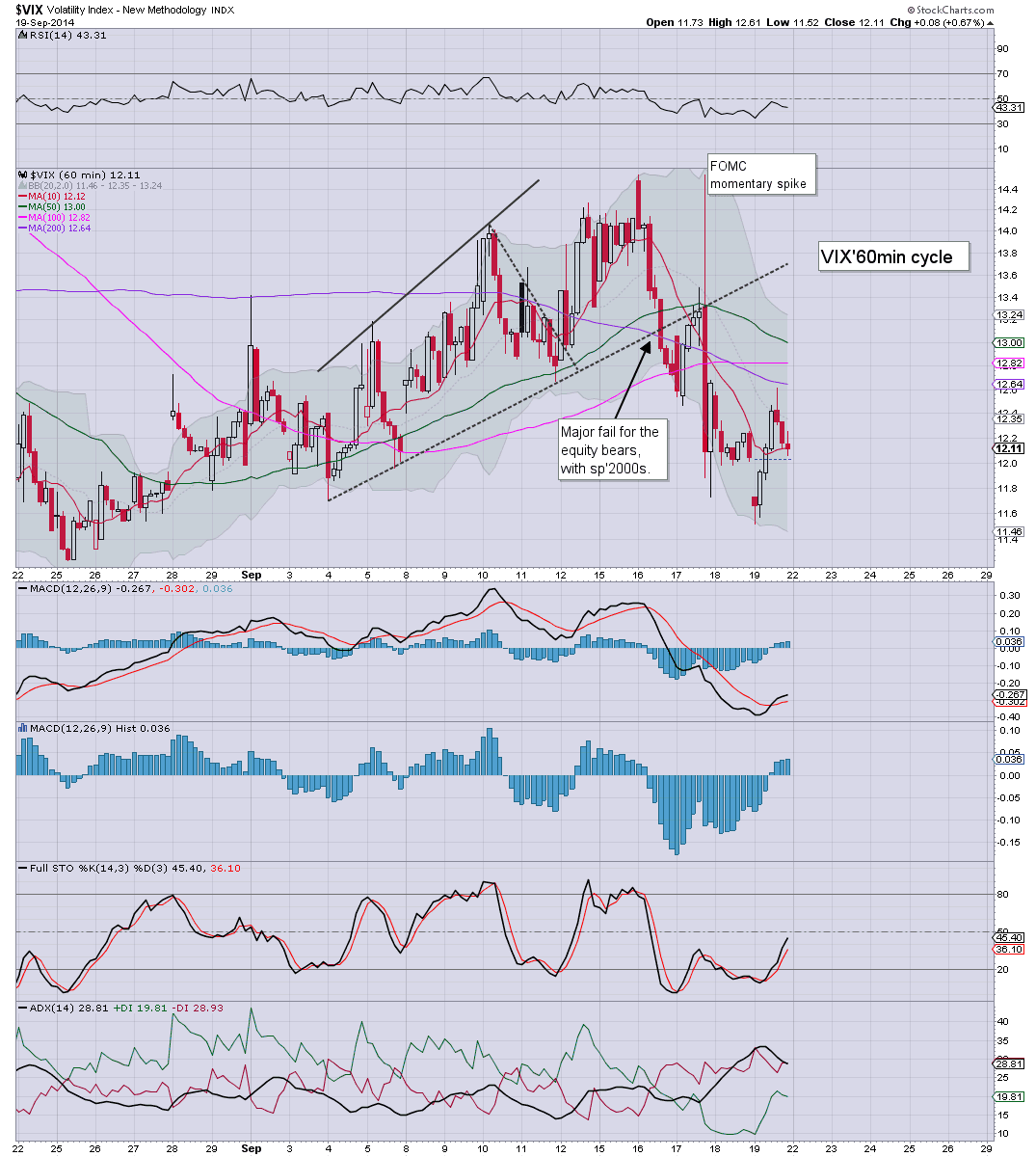 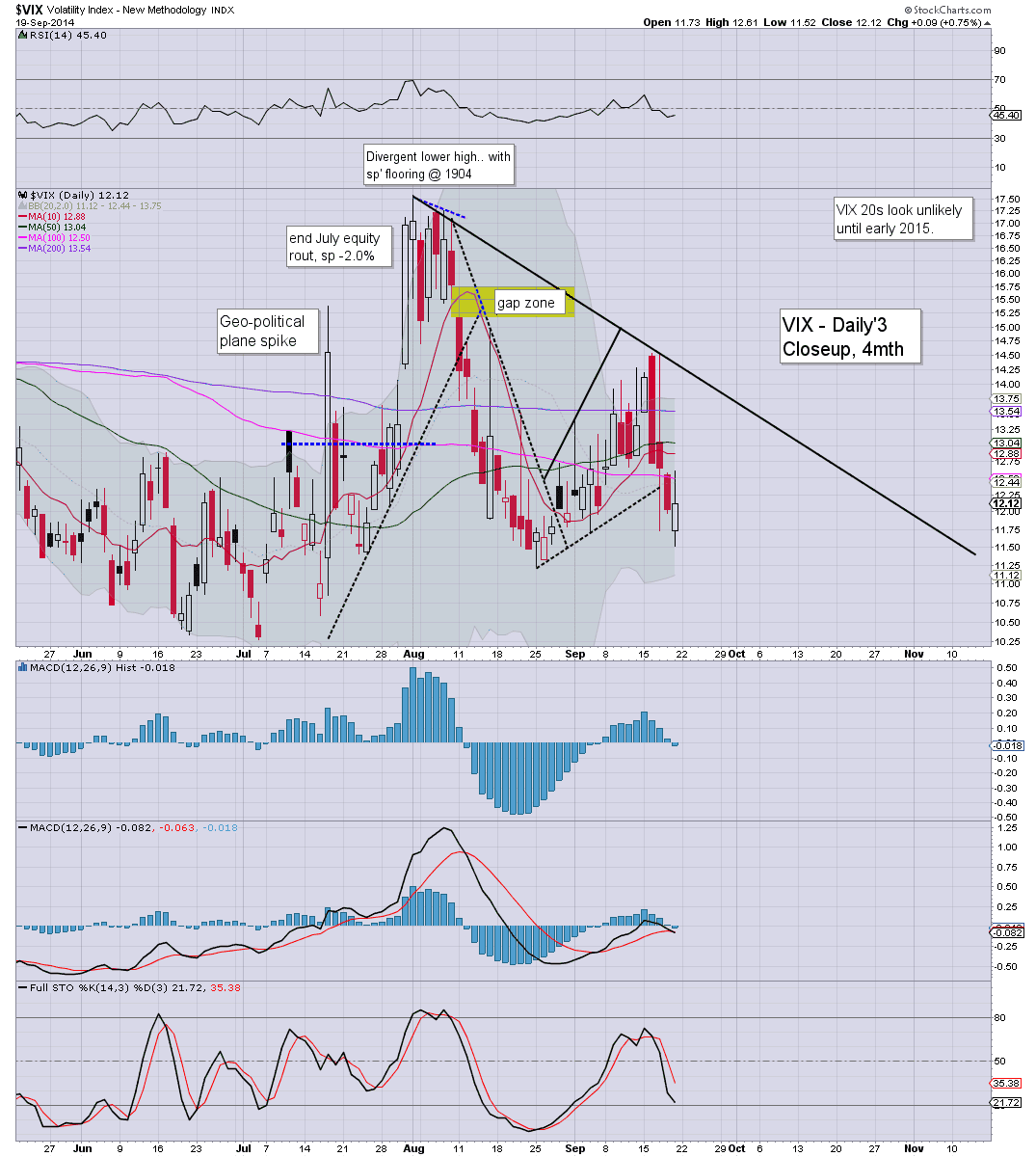 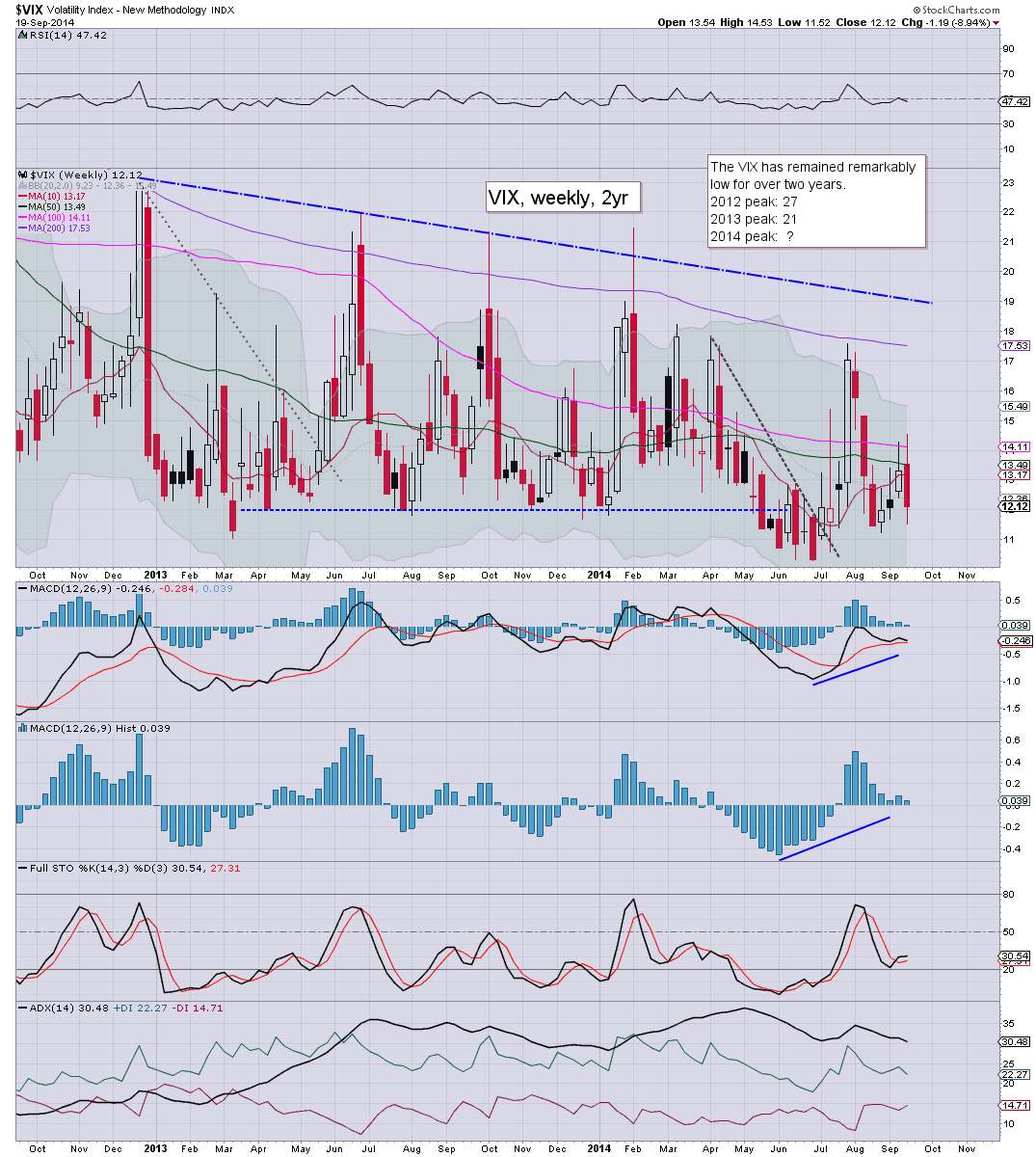 Suffice to say, for the equity bears it was rather lame that the VIX didn't even make it to the gap zone in the 15s this week.

There looks to be little possibility of VIX 20s for some months.
-- 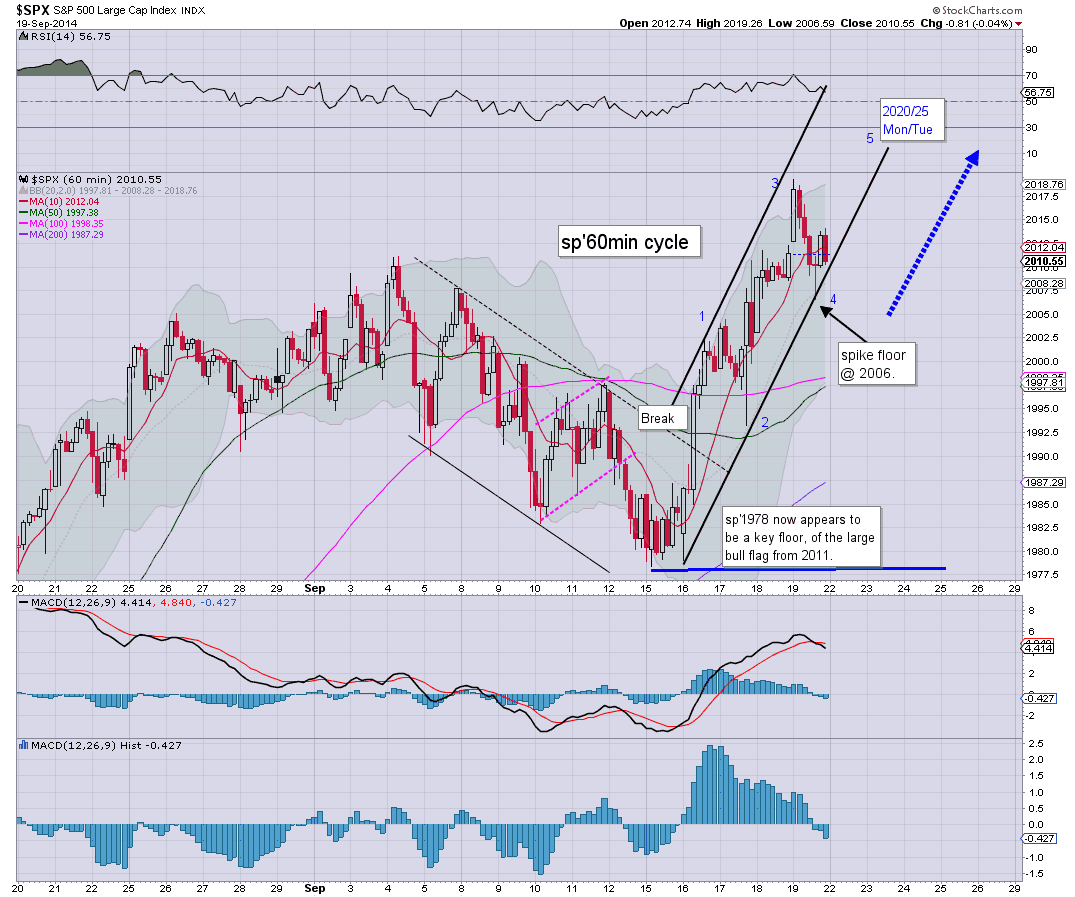 ...and that concludes another bullish week in market land.

Over at Mt. doom in Iceland

Caldera continues to fall... eventually Bardarbunga still looks set to blow up.... although I guess many have been saying the same about the equity market for some years.
Posted by Trading Sunset at 21:01:00
Email ThisBlogThis!Share to TwitterShare to FacebookShare to Pinterest

US equities remain somewhat mixed, although the smaller 5/15min cycles offer upside into the close. However, with a quad-opex, price action will likely be increasingly choppy into the weekly close. There are notable sig' declines in the R2K, -1.2% 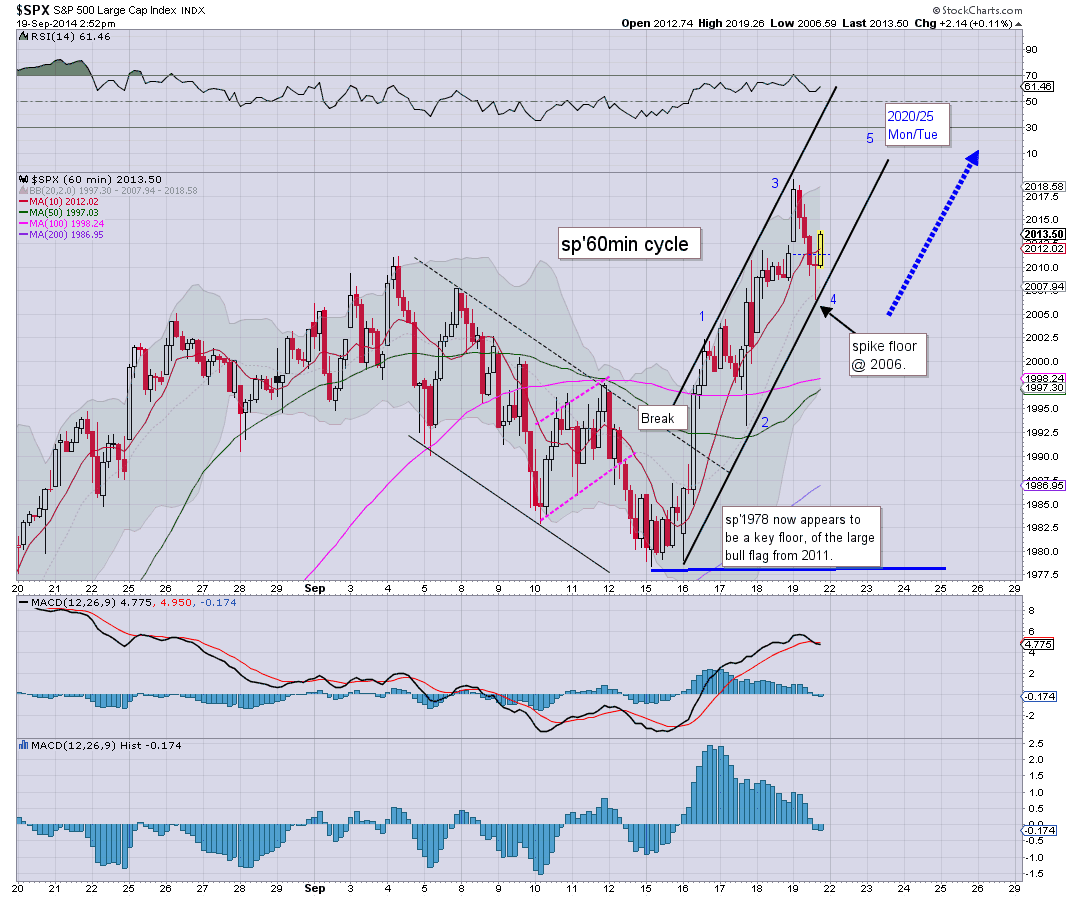 Its been a long week... thank the gods...its almost the weekend!

*I remain long, but if we can jump to 2020 by the close, I will probably exit for a day-trade..and would just re-long again on Monday.

The 2018/20 zone remains viable by the close, but still... more likely early next Monday.

On any basis though.. a week for the bulls. 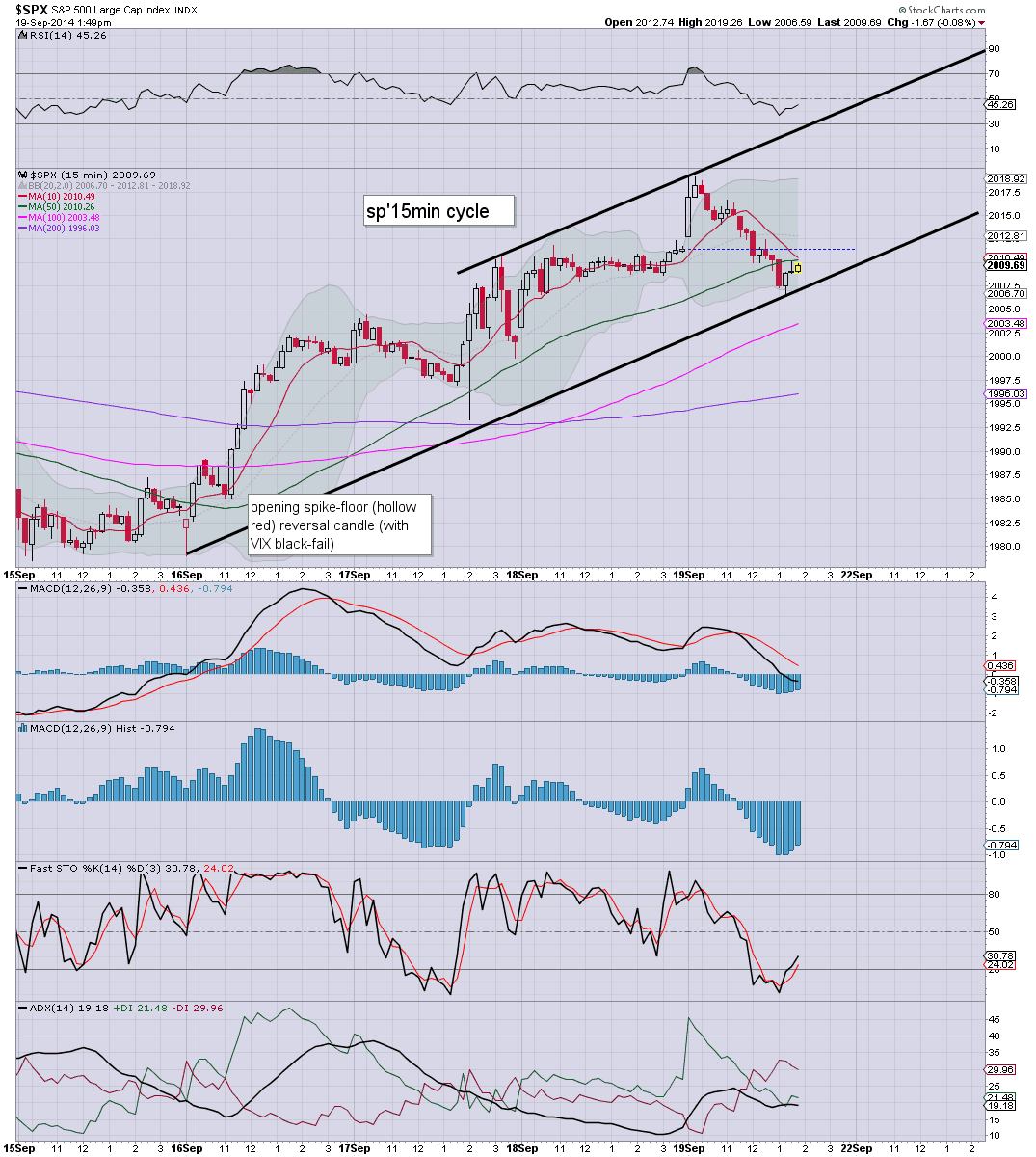 Looks like a pretty standard retrace... the 2020s look a very reasonable target in the next up wave... on Monday.

2.01pm.. .. only just noticed the R2K, -1.3%... hmm, not sure what to make of that, other than the usual 'laggard'.
Posted by Trading Sunset at 18:50:00
Email ThisBlogThis!Share to TwitterShare to FacebookShare to Pinterest

US equities are seeing some minor chop, having cycled down from sp'2019 to 2009.. a soft decline of around 0.5%. There looks to be renewed upside into the close, but it will likely be somewhat choppy.. since it is quad-opex. 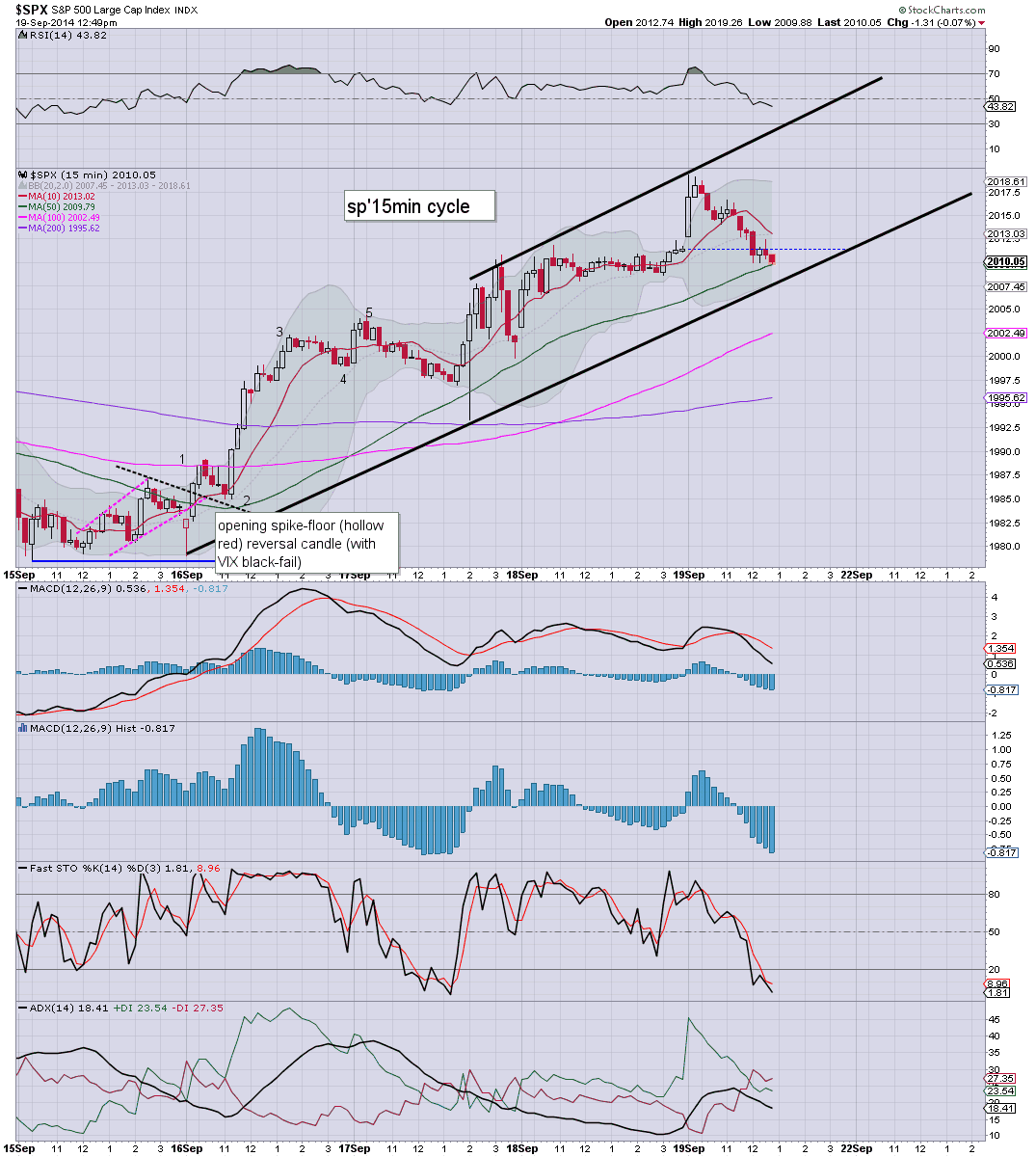 MACD cycle on the smaller 5/15min cycles look floored. Certainly, I think its a valid level to go long.. - when considering the broader trend.
--

time for a walk...between the storm cells.... back soon.
Posted by Trading Sunset at 17:50:00
Email ThisBlogThis!Share to TwitterShare to FacebookShare to Pinterest

US indexes have continued to slip a little, but it makes for a very natural down cycle from a trio of new historic index highs. Metals remain smashed, Gold -$5, whilst is down a rather severe -2.8%. 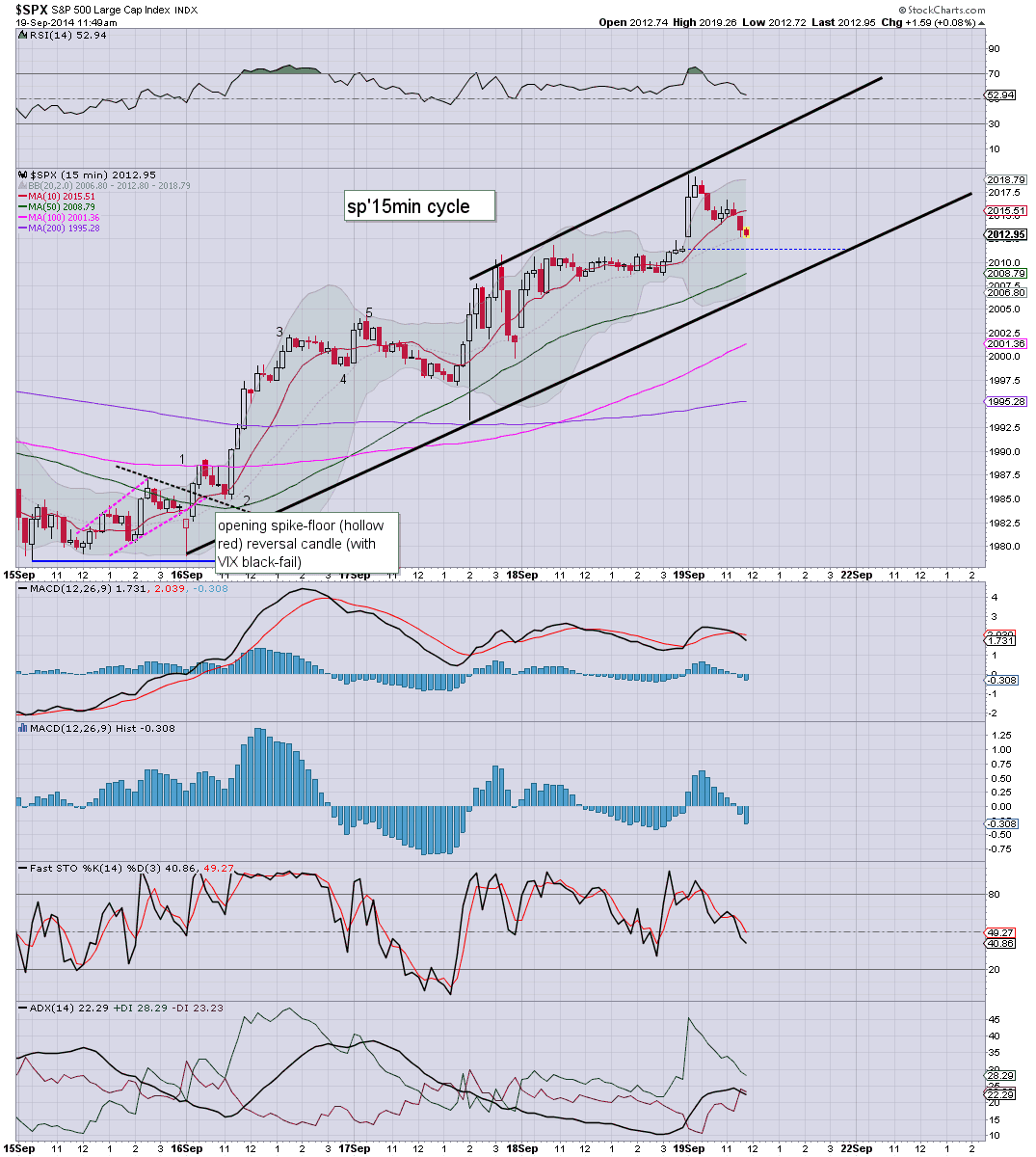 It remains a pretty historic sight, to watch the Alibaba IPO....

--
*I remain on the sidelines, but might pick up an index block...once the smaller 15min cycle looks fully floored.
-

11am update - storm clouds for the city

Mr Market is seeing a minor down cycle, from an early morning peak of sp'2019. a break much below 2010/08 will be difficult though. Weekly charts are offering the 2035/40 zone for next week. Metals remain relentlessly weak, Gold -$8 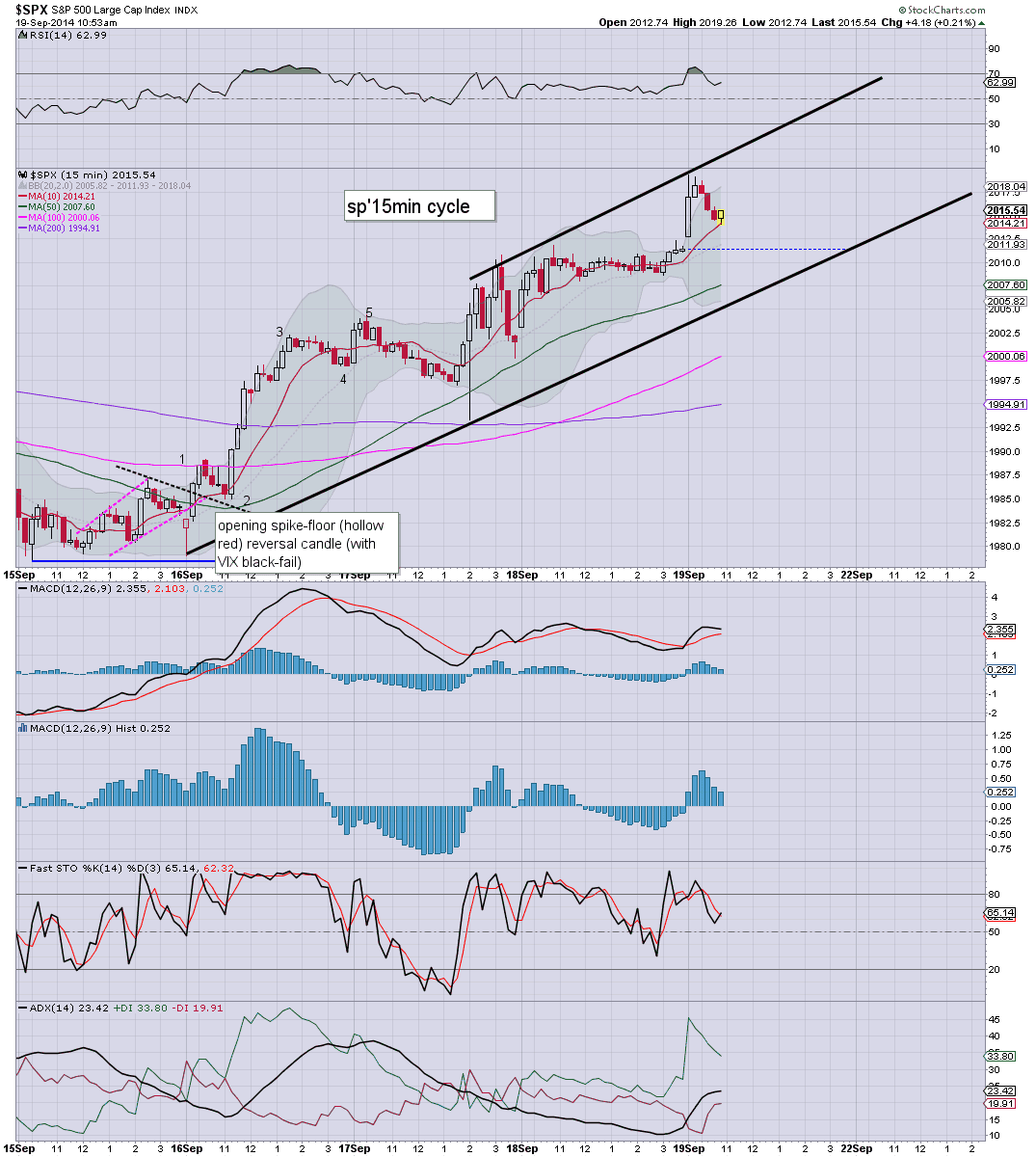 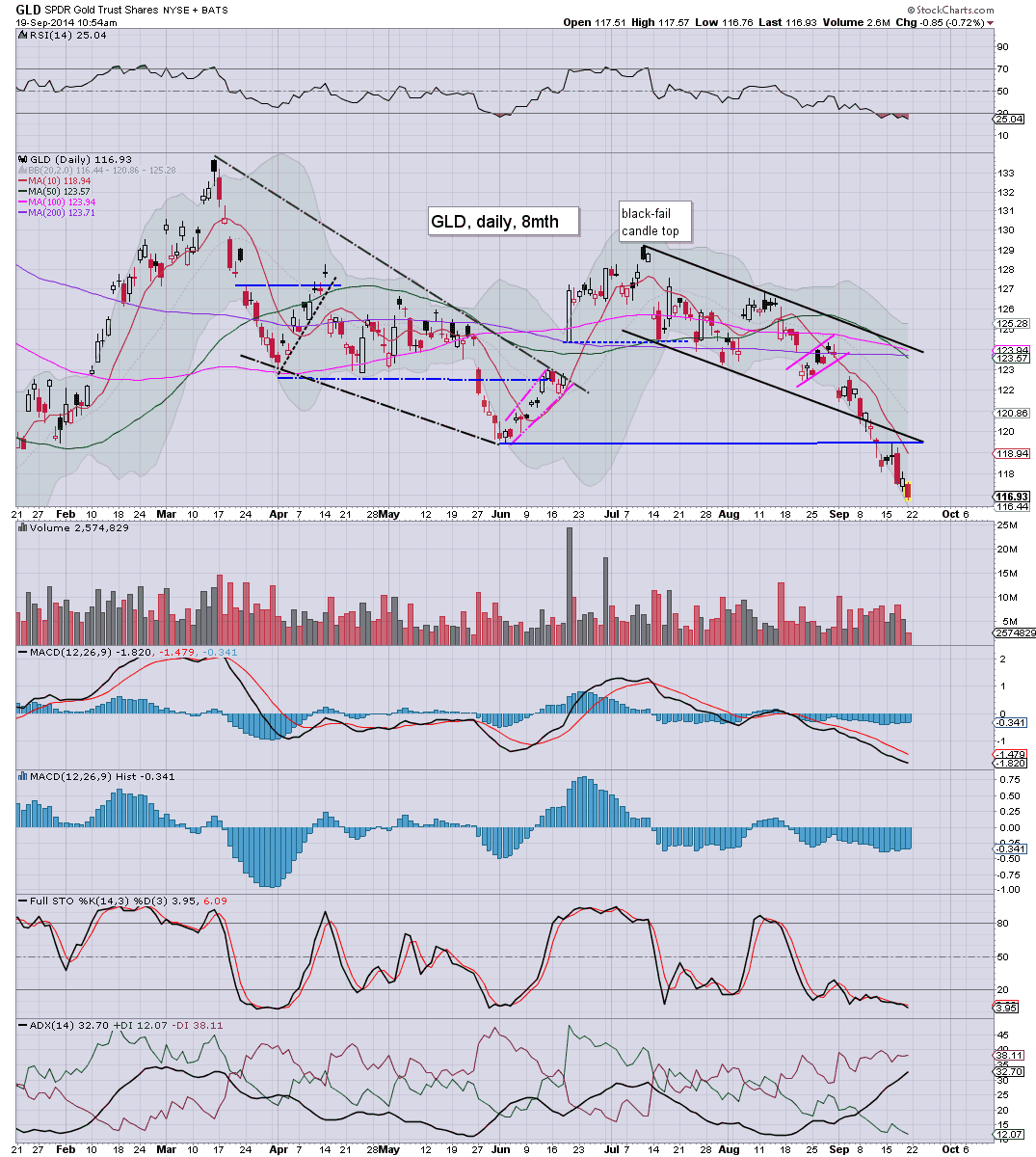 *those metals sure are ugly... but frankly, after 3 years, I merely laugh at the insanity within the gold bug community. Just consider that so many are STILL touting Gold $2000 by year end.. and the truly insane (yeah, I'm talking about YOU Mr H. Organ) are touting 10k...within 3-4 months.
--

meanwhile...over the city of a London, storm clouds are exploding upward. 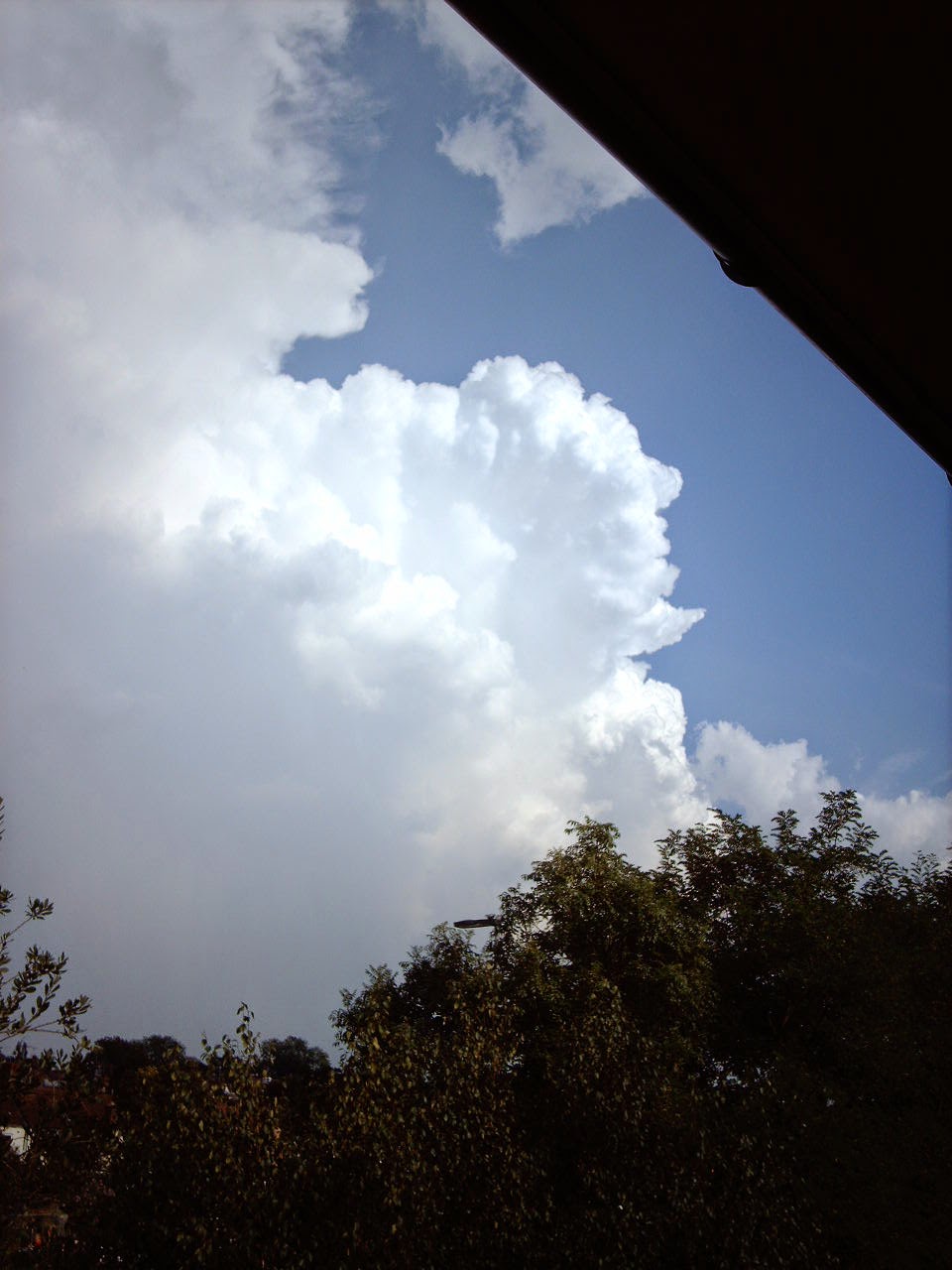 If I drop offline, well, then you know its a lightning strike!
--


11.36am... downside viable to 2008 or so...   VIX turns positive
Posted by Trading Sunset at 15:55:00
Email ThisBlogThis!Share to TwitterShare to FacebookShare to Pinterest

10am update - another set of historic highs

US equities open moderately higher, but it is more than enough to achieve new historic highs in Dow, SP', and Transports. VIX is in melt mode, -3% in the 11s. With the USD +0.3%, the metals remain weak, Gold -$3. 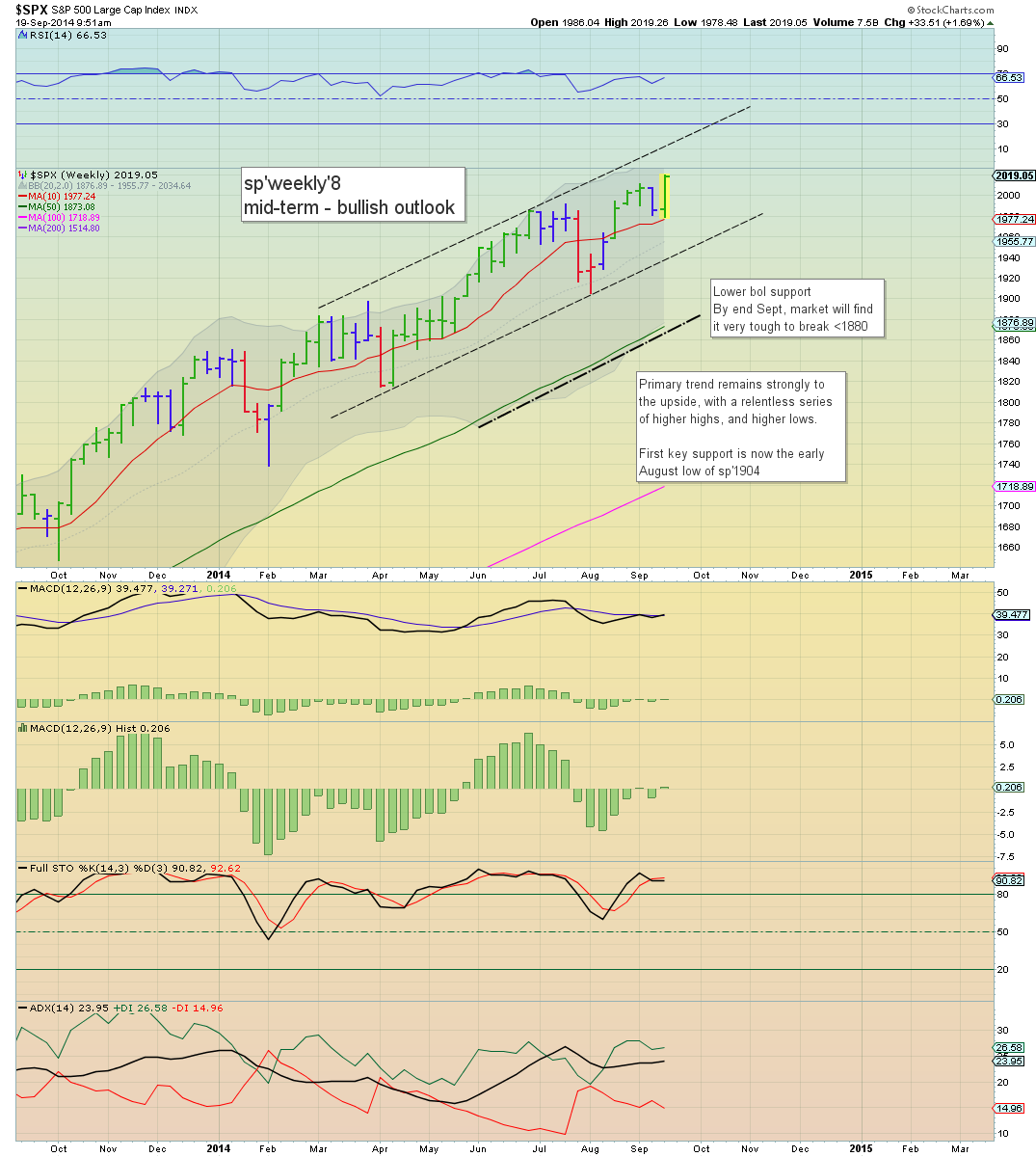 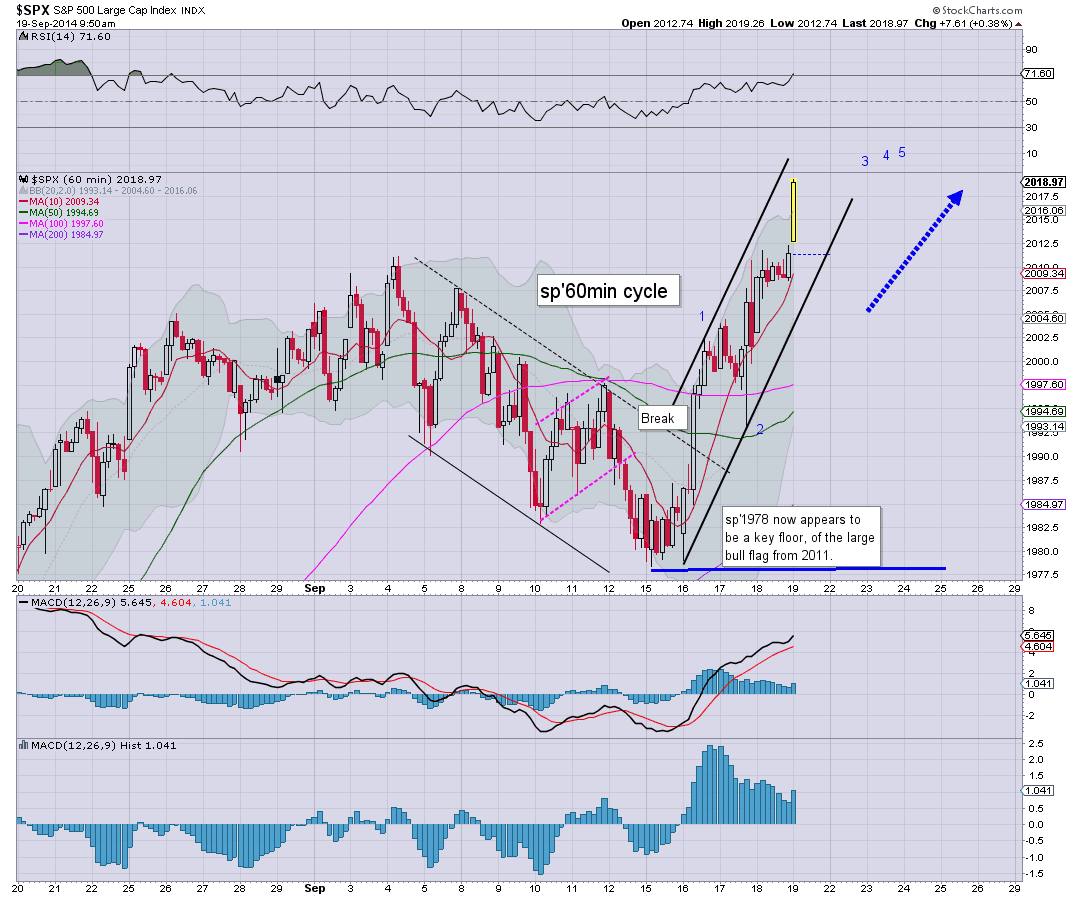 Without getting lost in the minor noise, the weekly charts are now offering the mid 2030s. By end month, we're now looking at the 2040s.

Whether the market gets stuck around 2050..or can just keep grinding to the 2100s - into Christmas.. difficult to say.

What is clear though.. this is no market for the bears.... trend remains strongly higher.
-

Certainly, it is a stock I will be closely following in the days..and months to come.

sp'2008/06 viable within an hour or so.... would be a valid entry level for those seeking to trade into the 2030s.
Posted by Trading Sunset at 14:52:00
Email ThisBlogThis!Share to TwitterShare to FacebookShare to Pinterest

Good morning. Futures are moderately higher, sp +7pts, we're set to open at a new historic high of 2018. Metals are a little weak, Gold -$3. Today will largely be about a very relieved European equity market, along with the giant Alibaba IPO. 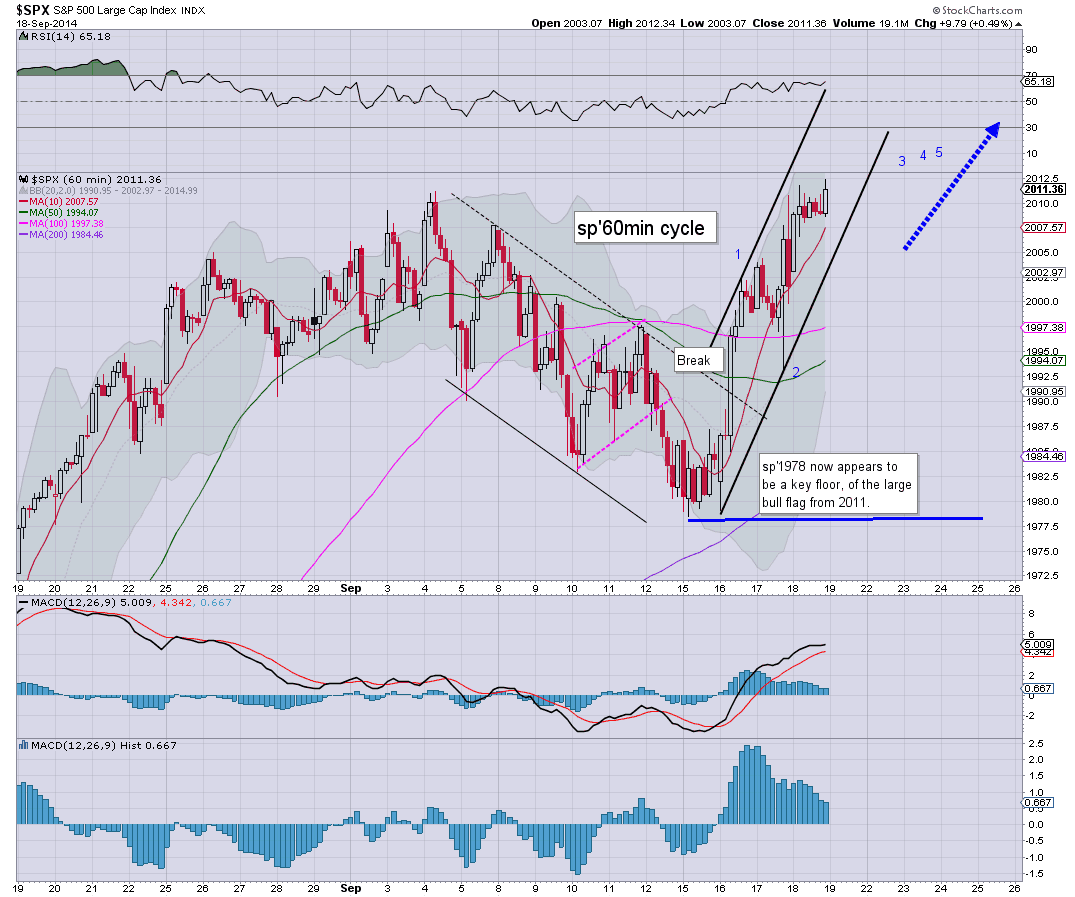 So... we're set to open at new historic highs... probably in the Dow, SP, and Trans.

It is notable that today is a quad-opex, along with an index rebalancing.. so expect some price chop.. especially into the close.

Hourly MACD (blue bar histogram) cycles are due to rollover, with a bearish cross today, but still, prices will probably just flat line... holding moderate gains into the weekend.
--

Well, I think many are genuinely surprised at the 'NO' vote, I certainly am.

For a few centuries, the Scots have endlessly whined and bitched about how they are under forced rule by the English (not forgetting the Welsh or Northern Irish)...and yet they have voted against self rule.

There will be some more 'localised powers' for the already existing Scottish parliament, but still.. they'll be largely under rule of those in southern England.

No doubt, the majority of Scots will soon be complaining about 'Westminster not giving a damn' what the Scots think. True.. but now the English will merely laugh.. and say 'you had your vote.. now shut up!'

For those in Catalonia, Spain, I can only imagine how many are feeling pretty depressed this morning at the failure of their fellow separatists, but they'll surely continue to push hard to get their own vote.

-
Good wishes for Friday trading
Posted by Trading Sunset at 12:00:00
Email ThisBlogThis!Share to TwitterShare to FacebookShare to Pinterest

Whilst US equity indexes saw a third day of gains, the real action is in North West Europe. where Scotland may break away from the United Kingdom.. it would make for one hell of a geo-political event.. one that will have implications across the wider EU.. for years to come. 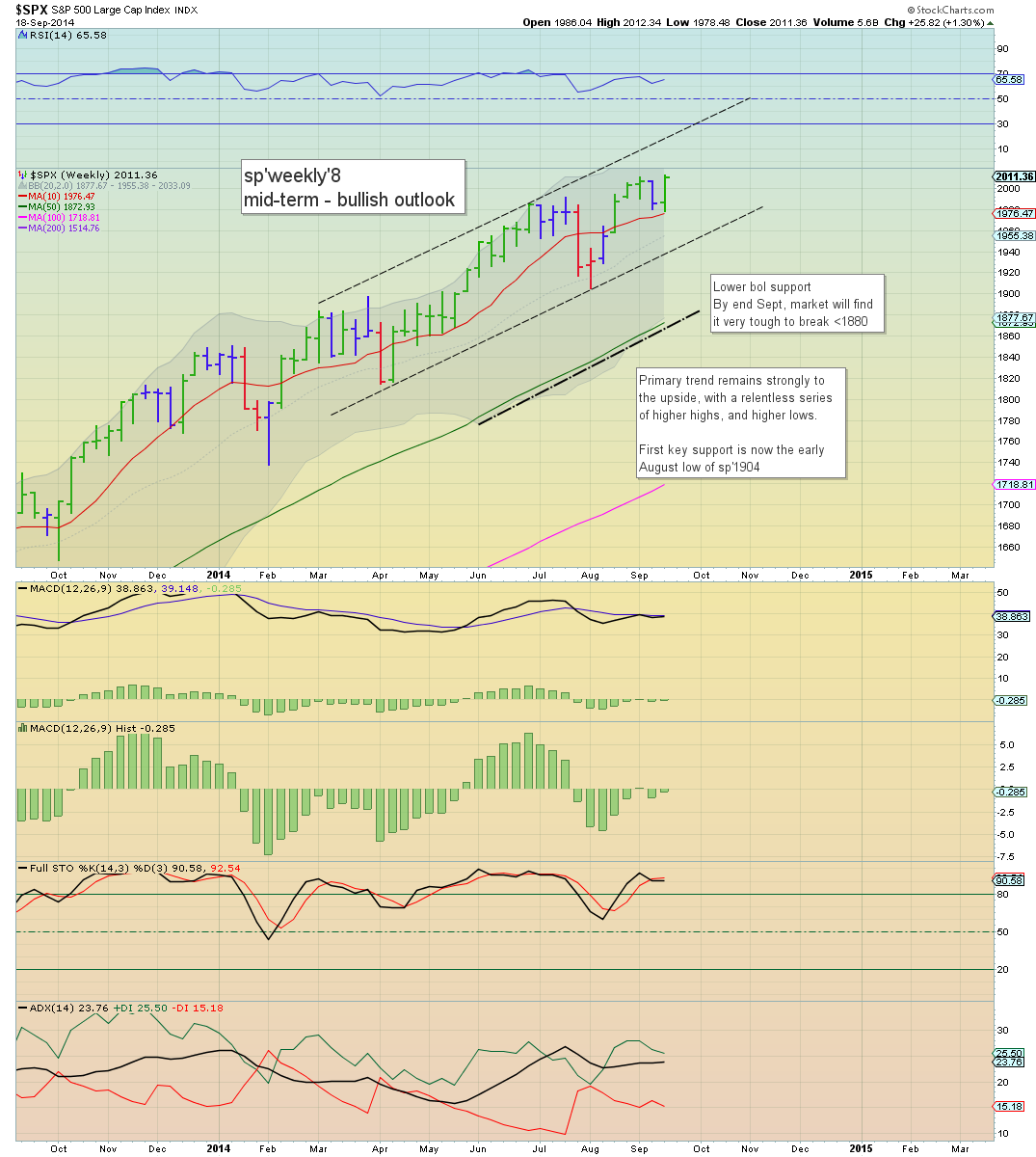 *I'm writing this before the Scottish vote result is clear.
--

In terms of the equity market, the broader upward trend is really asserting itself, with new historic highs on the Dow and sp'500. The weekly 'rainbow' chart is sporting an outright bullish green candle.

The only econ-data due is 'leading indicators', but I don't think many will have much interest in that tomorrow.

There is also a quad-opex, with some index rebalancing to wrap up the week.

*next QE is not until next Tuesday
-

I realise for many in the USA, the issue of Scotland leaving the UK is of little importance. Frankly, most Americans couldn't put a pin on a map to indicate the rough location of Scotland.

However, the implications are pretty huge. A successful Scottish breakaway would deeply inspire various factions across Europe to relaunch the efforts for more localised government. Catalonia, in Spain, remains a real hotbed of contention for southern Europe.

Without doubt.. many Catalonians will be watching UK TV this night... cheering on a 'YES' vote.

Goodnight... from what remains of the Kingdom
Posted by Trading Sunset at 04:00:00
Email ThisBlogThis!Share to TwitterShare to FacebookShare to Pinterest 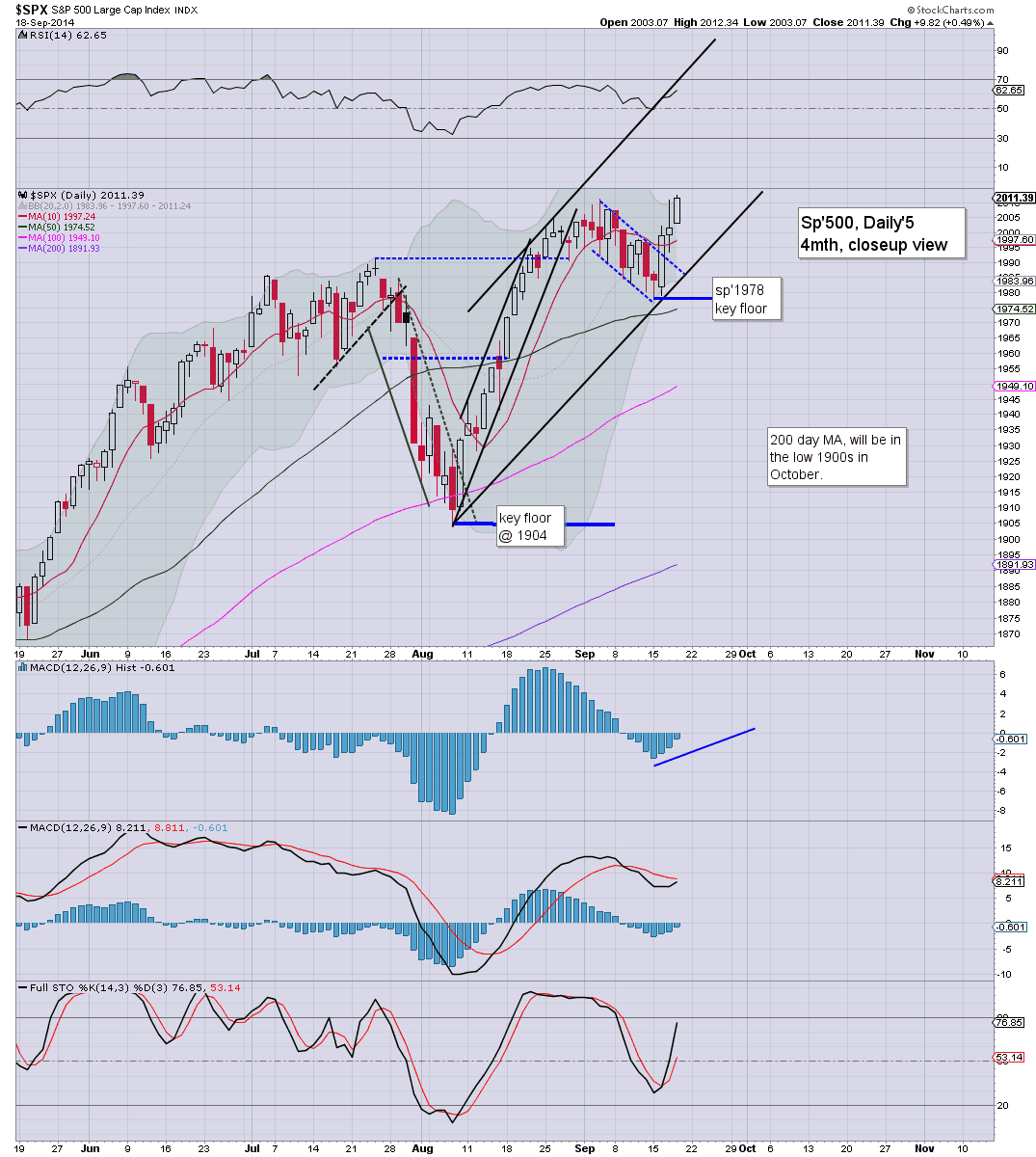 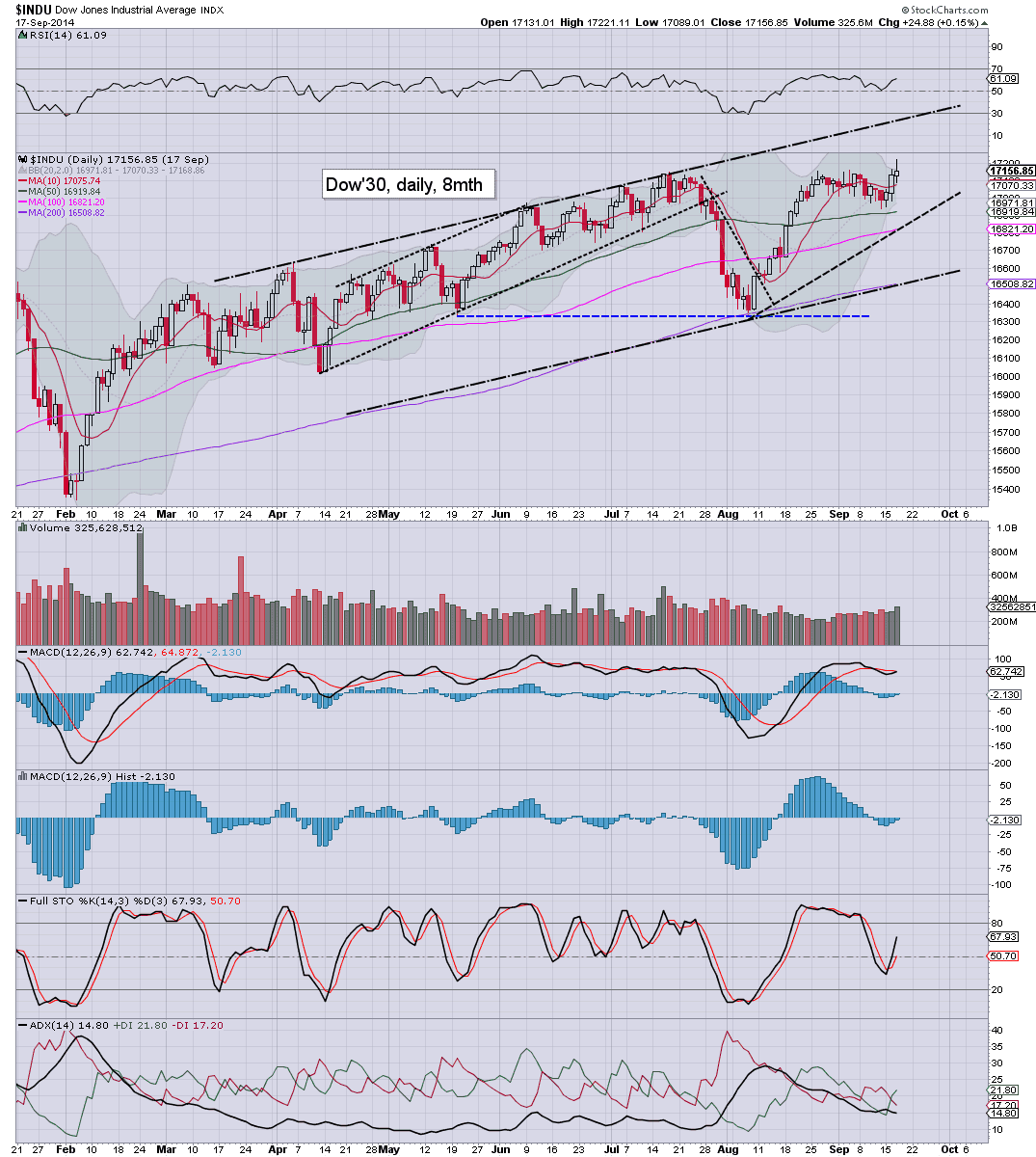 With new historic highs in the Dow and Sp'500, this remains a powerfully bullish market.

There really isn't much else to add.
--