The VIX closed lower for a fourth consecutive day, losing a further 5%, to settle @ 13.83. This is the lowest close since mid August. Across the week, the VIX lost a stunning 39%, and this is perhaps the largest weekly decline...ever, and that's with a shortened four day trading week! 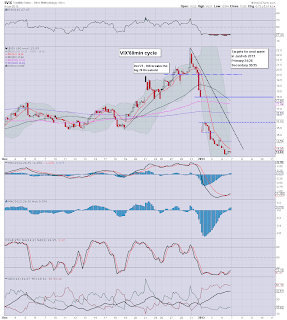 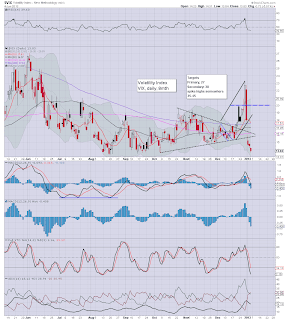 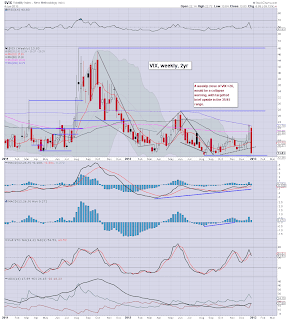 Just reflect where we were at the Friday close last week. We saw a brief spike to VIX 23.23, and since that AH spike, its been a devastating drop. The weekly drop of 39% is probably a record drop.
--

Considering the indexes - especially the monthly index charts, since it seems sp'1490/1510 will now be hit across the next month or two, it would seem likely the VIX will see even lower levels.

VIX 12s or 11s seem likely, the only unknown is whether we'll see VIX 10..or even single digits, which would certainly make the clown finance TV networks get hyper bullish.
--

More later...on the those bullish indexes.
Posted by Trading Sunset at 23:00:00
Email ThisBlogThis!Share to TwitterShare to FacebookShare to Pinterest

The market closes the week on a high, and is the highest close since 2007.  With the VIX back in the 13s, the market is back in a state of mild hysteria. Near term term trend - as suggested by the big monthly charts, would be somewhere in the sp'1490/1510 zone. 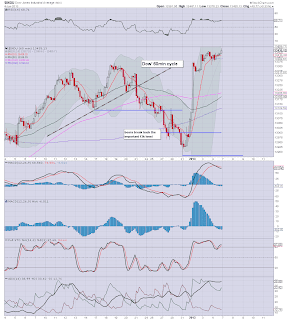 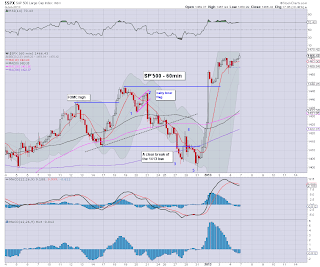 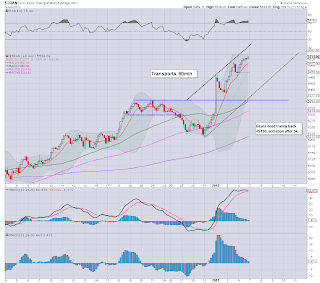 Well, Monday morning's open of sp'1398 feels like some 'weeks ago', but suffice to say, I'm surprising content with how this week went.

We've seen pretty much a hyper-ramp after the relief of some form of fiscal cliff delay, but that will again rear up in Feb/March  - along with the debt ceiling.
--

Talk about a deluded market.

--
*there will be a weekend posting, late Saturday, probably on the world index monthly cycles
Posted by Trading Sunset at 21:04:00
Email ThisBlogThis!Share to TwitterShare to FacebookShare to Pinterest

The market is still stuck under 1465, but just keep in mind we were trading @ 1398 at the Monday open. We've come a long way this shortened 4 day week, and even if we flat line all of next week, the broad trend will still be to the upside - as the monthly charts now all support. 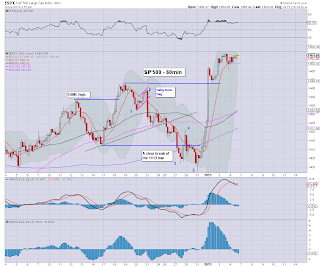 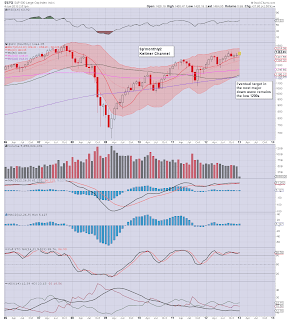 Unquestionably, ALL cycles are now bullish. All that is missing is a break of the SP/Dow/Nasdaq above the mid-September highs.

As has been the case on many occasions, it is the Transports and Rus'2000 small cap indexes that lead..and they sure have lead the way this week.

*looks like the VIX will close in the 13s, which would be the lowest level since last August.
-- 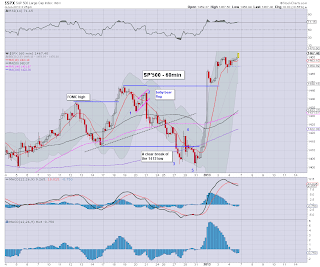 Incredible to think that sp'1500s..with VIX 12/11..perhaps even lower...real soon.
-
Isn't it great that the global economy is fixed..not least the US/EU fiscal issues!

back after the close.
Posted by Trading Sunset at 19:54:00
Email ThisBlogThis!Share to TwitterShare to FacebookShare to Pinterest

2pm update - closing the week on a high

It won't take much this afternoon to break above sp'1465, and then we could even close in the low 1470s. With the R2K and Transports showing very important further strength, there is no reason to believe why we won't now just keep pushing higher into early February. 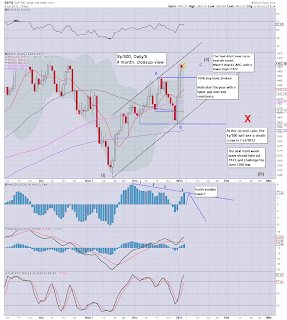 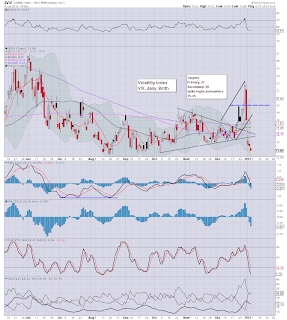 I can understand if some would knock my end year bearishness, but I managed an exit @ 1398..and despite missing out on a hyper-rally, at least I didn't get nuked by holding short.

Frankly, I'm more than content to sit back and watch, and see how high the 'maniacs' wanna push this.
--

There are STILL, rumblings of trouble out there...for those who can hear.

I can just imagine going long VIX @ 12/11 early Feb..yeah..that'd be a very good level indeed.
Posted by Trading Sunset at 18:55:00
Email ThisBlogThis!Share to TwitterShare to FacebookShare to Pinterest

On balance, it would seem we'll break over 1465 later today or Monday, and that will open the way to the Sept' high of 1474. I don't expect that to hold, and it looks like the bulls will be able to push to somewhere in the 1490/1510 area, within a few weeks. 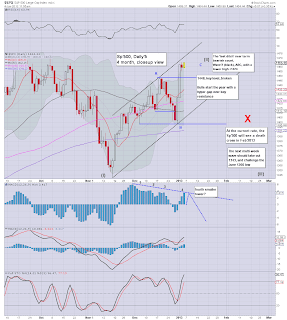 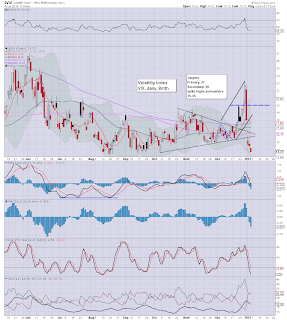 More than anything, I believe it is the Transports and R2K that are showing the way, and with the recent breaks higher - way above the Sept' highs, that is highly suggestive the Sp/Dow will similarly follow.

I would still expect some sort of turmoil when the debt ceiling issue needs to be dealt with in Feb/March.

Notable stock mover....transocean (RIG) which I hear has settled a closing payment for the Horizon' disaster. 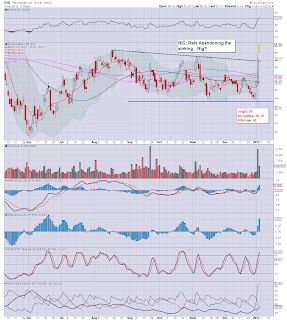 back at 2pm
Posted by Trading Sunset at 16:58:00
Email ThisBlogThis!Share to TwitterShare to FacebookShare to Pinterest 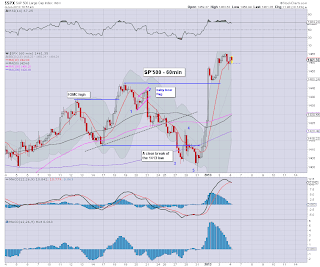 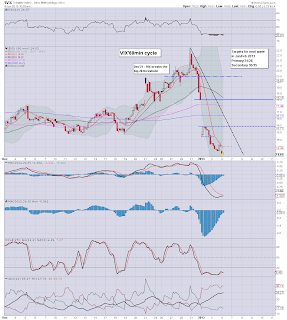 A somewhat quiet end to the week...and I will sit this out until there is some clarity.

VIX is very weak, and 13s look set to be hit today.

AAPL is weak... as expected (see my post on FVS from yesterday)... 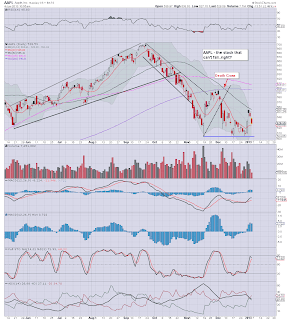 Could easily floor around here

The market seems so be stuck around sp1455/65. A break either side of that range will be important to recognise. Anything over 1465, and we'll likely test the 1474, and I'd assume break through it - as the R2K and Transports would suggest. Another day or two stuck <1465..would be suggestive a retracement at least to 1440/35. 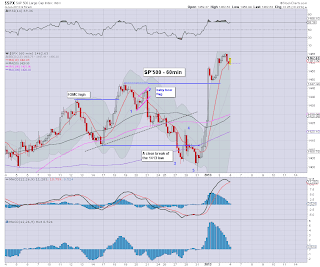 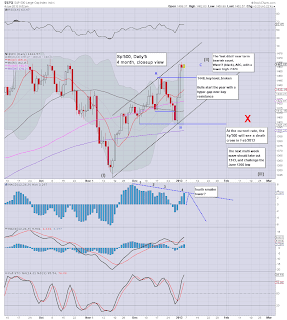 Interesting action in Gold..and the dollar.
--

I remain content to do nothing... on the sidelines. At least for now.
Posted by Trading Sunset at 14:54:00
Email ThisBlogThis!Share to TwitterShare to FacebookShare to Pinterest 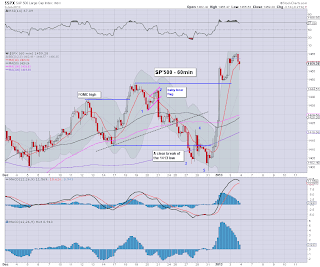 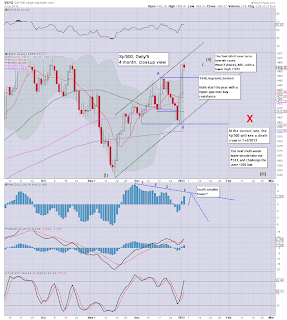 Its possible we might see the daily MACD cycle start to level out today, and that will be somewhat termpting to launch a re-short.

Lets see how the price action is this morning.

*as an options trader, it'd be better to wait until after the weekend anyway.
--
Good wishes for Friday trading

It will be somewhat difficult for the market to break 1465, and it gets stuck into the afternoon, I will be sorely tempted to short, with a target of 1440 - at least a small retracement for early next week.

If we break >1465, then I'll absolutely sit it out, and I'd assume 1474 will be viable for Monday.
-
Posted by Trading Sunset at 13:33:00
Email ThisBlogThis!Share to TwitterShare to FacebookShare to Pinterest

With the hyper-ramp from sp'1398 to today's high of 1465 in just 3 trading days, the monthly indexes are now nothing less than outright bullish. With the R2K breaking to new historic highs, and the Transports in the 5500s earlier today, it would now be surprising if the sp'500 did not break the Sept' 1474 high. 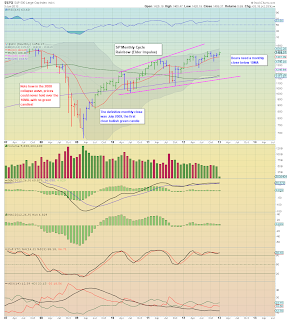 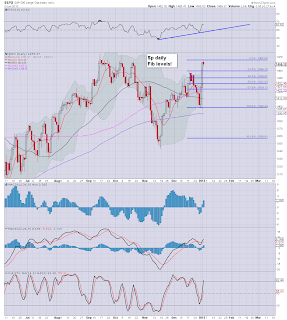 The various 'rainbow' charts are all sporting green candles, and a test of the upper bollinger band...this month..or next..somewhere around 1490/1510 seems very viable.

A minor retracement seems likely across the next few days. Fib' levels are suggestive of a pull back somewhere in the 1440/35 area, where the daily 10MA is also lurking.


Due for the trash bin 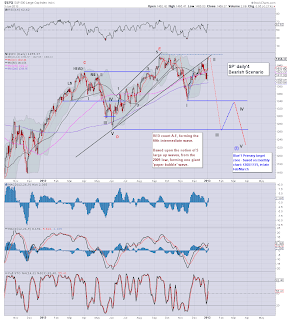 Well, I suppose its not officially 'busted' yet, but anything >1474, and it has to get thrown out.

Yet, things are surely different now to then, yes?

The fact the R2K and the transports are already over their September highs, leads me to indeed believe we'll see sp'1474 taken out..in the near term.

We have a few pieces of key econ-data tomorrow, including the big monthly jobs number, although I will be more interested in factory orders. At least the latter is not subject to 'seasonal adjustments' and birth/death issues.

Most of the indexes closed a little lower, but the declines were indeed nothing less than 'mere noise' compared to yesterdays massive gains. The underlying momentum remains to the upside, and there is no sign of anything changing. 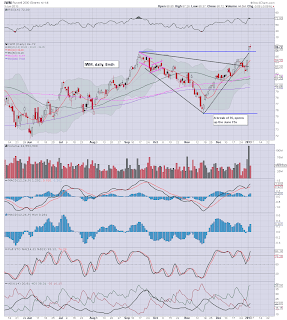 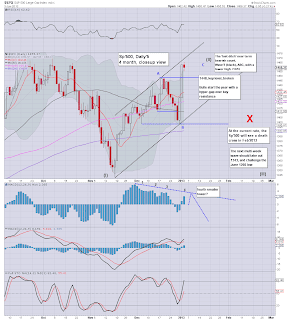 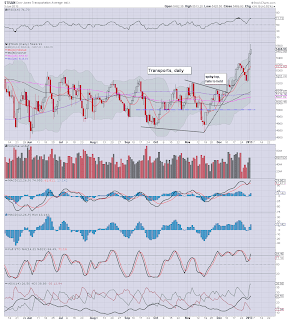 So..we didn't get a third giant up day, but neither have we seen any significant reversal.

It looks like sp'1398 was indeed a key floor, and that we're going surpass sp'1474 within the next week or two.

This outlook is especially supported by the R2K - which once again hit a new historic high today, and the Transports which still managed to close 0.6% higher. The earlier break into the 5500s was certainly important to recognise.

Underlying momentum - see MACD (blue bar histogram) is still ticking higher, and even if prices are flat for the next few days, the cycle still won't be rolling over.


Bears can't be re-shorting this market.

What is clear, the only 'safe' (if there is such a thing) short trade right now, is with a short position being taken, if the market breaks below the 1398 low. Until we break that low, bears are shorting into what is a very strong multi-month rally..from the 1343 level.