VIX collapses into the weekend

With equities seeing another swing, this time to the upside, the VIX was ground lower into the weekend, settling -15.6% @ 16.86. Near term outlook is offering broad equity upside into August, with the VIX set to cool to the low teens.. perhaps 12/11s.. before sustained 20s.. or even 30s in Sept/Oct. 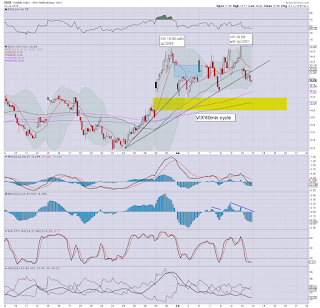 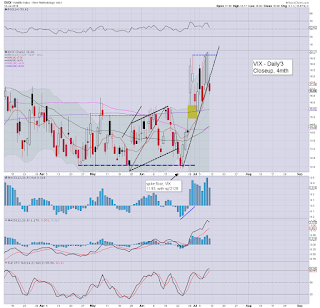 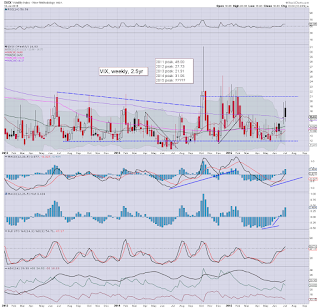 Certainly, the market saw some significant volatility this week, and we even saw the VIX briefly (as in minutes) break above the key 20 threshold.

-
The bigger VIX weekly cycle is offering a second consecutive spiky top candle... and that bodes for further cooling into next month.

What is rather exciting though is that the next VIX up cycle - probably beginning after mid August, should see much higher levels.. at least to the 25/30 zone.
- 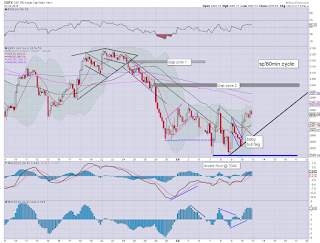 ... and a particularly roller coaster week comes to a close.

Frankly, I'm pretty burnt out... and I know many are dizzy after the price swings this week.

For the moment, I won't be short anything... and will merely take occasional minor long positions.
--

Thanks for the comments this week.. well.. most of them.
-
*the usual bits and pieces across the evening to wrap up the week
Posted by Trading Sunset at 21:01:00
Email ThisBlogThis!Share to TwitterShare to FacebookShare to Pinterest

Despite some significant down waves this week, most US indexes are (somewhat surprisingly) set for net weekly gains. VIX is reflecting a market that is increasingly confident into the weekend, -16% in the 16.70s. USD remains moderately weak, -0.6% in the DXY 95.90s. 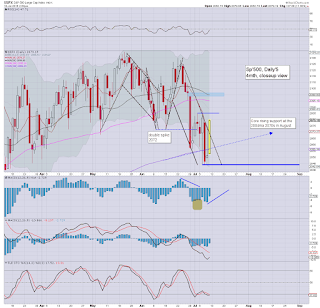 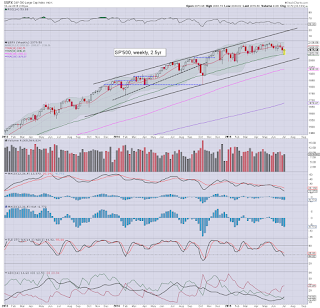 It has been a long week, and barring some closing hour news... I will be back at the close.
--

weakness: miners, GDX -1.6%... despite Gold trading flat.
Posted by Trading Sunset at 19:56:00
Email ThisBlogThis!Share to TwitterShare to FacebookShare to Pinterest

US equity indexes are holding significant gains, with some indexes set for net weekly gains. The VIX has seen a clear break outside of the upward trend, set to settle in the 17.50/16.75 zone. Metals are increasingly weak, Gold -$3, whilst Oil -0.9% 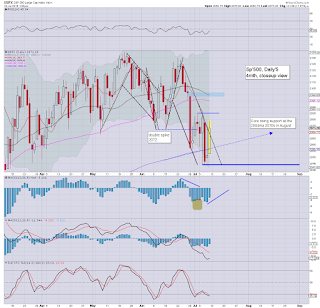 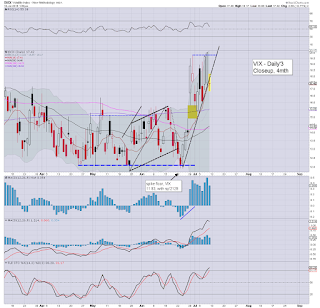 I would imagine many will be glad for the weekend.. after the dizzying intraday swings this week.

Broadly, it does look like the US market will battle upward into August... along with China. The real issue remains the possibility of more severe downside into Sept/Oct.

--
Another warm.. and somewhat sunny day in the big city.

:)
Posted by Trading Sunset at 18:51:00
Email ThisBlogThis!Share to TwitterShare to FacebookShare to Pinterest

US equities are holding significant gains, with the bull maniacs needing sp'2077 for a fractional net weekly gain. VIX continues to reflect a market that is increasingly confident of another Greek can kick, -13% in the 17s. USD remains weak, -0.6% in the DXY 95.90s. 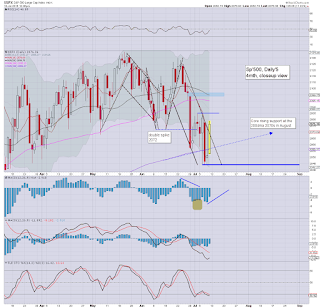 It does look like the gains will hold into the weekend, the only issue is whether the bulls can somehow manage to claw into the 2080s.. and hold there for the close. 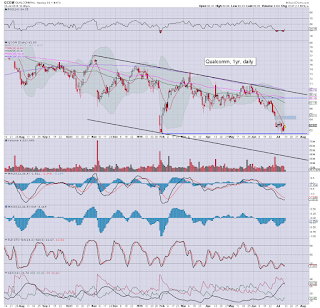 *I rarely mention QCOM, but probably will in the coming weeks. It looks a valid short in mid/late August.. from around $68. Downside target would be...56/55.. by early Oct'. I like the company in the longer term though.

--
back at 2pm
Posted by Trading Sunset at 17:49:00
Email ThisBlogThis!Share to TwitterShare to FacebookShare to Pinterest

Unlike yesterday, after some moderate cooling to sp'2066, US equities are building gains, set to break into the 2080s. VIX is reflective of a market that is increasingly confident that some kind of Greek resolution will be achieved.. kicking the infamous can, at least a little further across the summer. 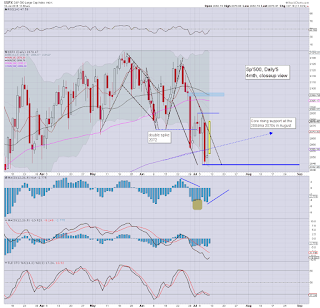 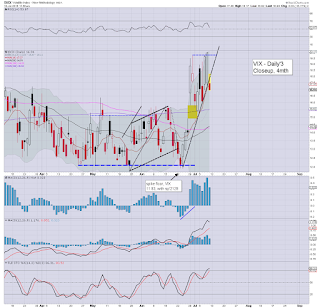 *special note.. Yellen is due to speak this hour
---

The daily equity/VIX charts are starting to look rather good for those on the long side.

weakness: oil/gas drillers, RIG/SDRL, both lower by around -3%... not helped by today's lower Oil price.
-

--
time to see what the cheerleaders on clown finance TV are saying
Posted by Trading Sunset at 16:52:00
Email ThisBlogThis!Share to TwitterShare to FacebookShare to Pinterest 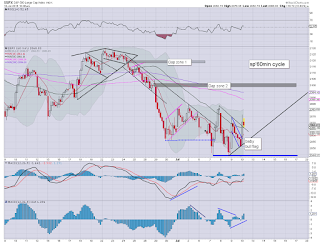 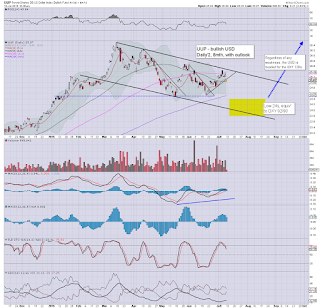 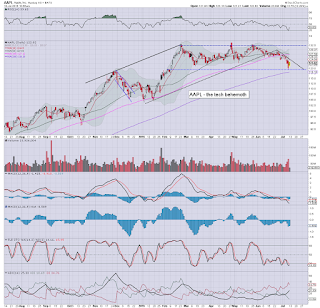 notable strength: airlines, DAL/UAL, both higher by 3.8%
Posted by Trading Sunset at 15:55:00
Email ThisBlogThis!Share to TwitterShare to FacebookShare to Pinterest 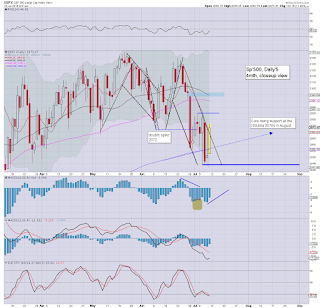 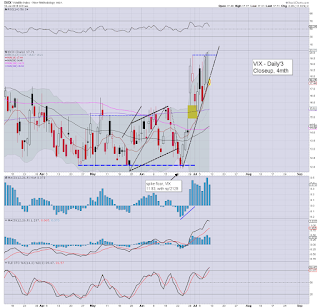 *opening reversal candle in the VIX.... just like  yesterday. However, I'm somewhat dismissive of it.
--

Thank the gods.. its almost the weekend... I need to rest!

notable strength:  AAPL, +1.6%.. and coming earnings should be fine, right?


10.06am.. something to look for at the close... VIX rising trend will be around 17.75. Any close under there.. should confirm equity strength into August.
Posted by Trading Sunset at 14:52:00
Email ThisBlogThis!Share to TwitterShare to FacebookShare to Pinterest 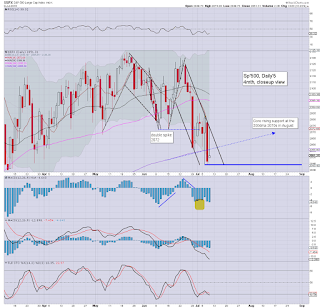 So.. here we go again.. we're set for another powerfully bullish open.

Unlike yesterday though, we're going to break straight above declining resistance.. and that is a much more positive situation than yesterday.

Overnight China action: The market opened a little lower, but then soared, settling higher for the second consecutive day, +4.5% @ 3877. Further upside looks due into August... 4300/500.. .before renewed weakness after mid August.. into early Oct. Downside would be to either 3K.. or even 2500.
--

*I am largely refraining from any comments on the latest absurb Greek deal/offer...  but yes... it IS bizarre that they are now looking to agree to something the people voted against last Sunday.
Posted by Trading Sunset at 12:03:00
Email ThisBlogThis!Share to TwitterShare to FacebookShare to Pinterest

The Thursday trading session saw Chinese equities experience further swings, breaking a new cycle low of 3373, but then rallying strongly into the close, settling +5.8% @ 3709. A wave higher is due into August, with a primary target zone of 4300/500. 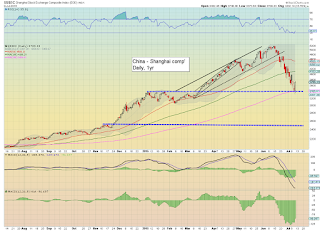 Little to add, but it does seem many of the other world markets are increasingly looking to China as a means to pick a direction.

My original downside target from 5K were the 3400s... with that being hit.. a natural bounce seems due into next month. If correct, that will certainly help 'inspire' many other markets. 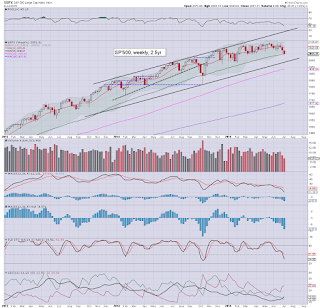 With one day left of a rather volatile week, we're currently net lower by -1.2%. Considering there won't likely be any provisional Greek deal until the weekend at least... the equity bears are set for their third consecutive net weekly decline, the weakest trading period since early January.
--

*there are two fed officials on the loose. Notably, Fed chair Yellen is set to speak, and Mr Market will surely be listening. I would imagine a press release of the speech will be issued at 12pm, and the algo-bots will likely have some reaction to that.
--


Meanwhile... from another bunker...

... indeed, bring me the head of the false prophet... Jim Cramer. 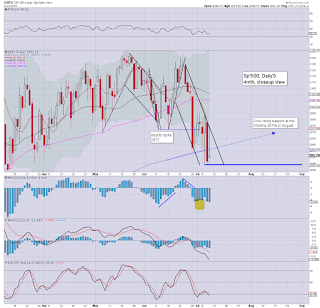 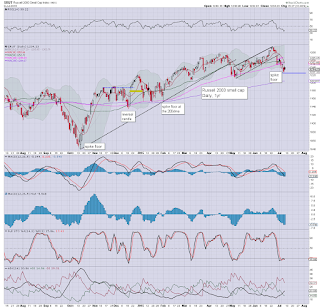 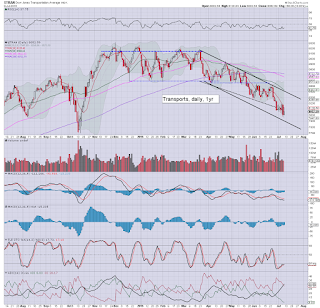 Net daily gains across all the main indexes, but the vast bulk of the opening gains were lost, with weakness all the way into the close.

Frankly, a fair few of the closing daily candles bode strongly in favour of the bears... and with the sp'2044 low a mere 7pts lower... it won't take of a market scare to gap under that.

It would seem the bulls have a problem into the weekly close.