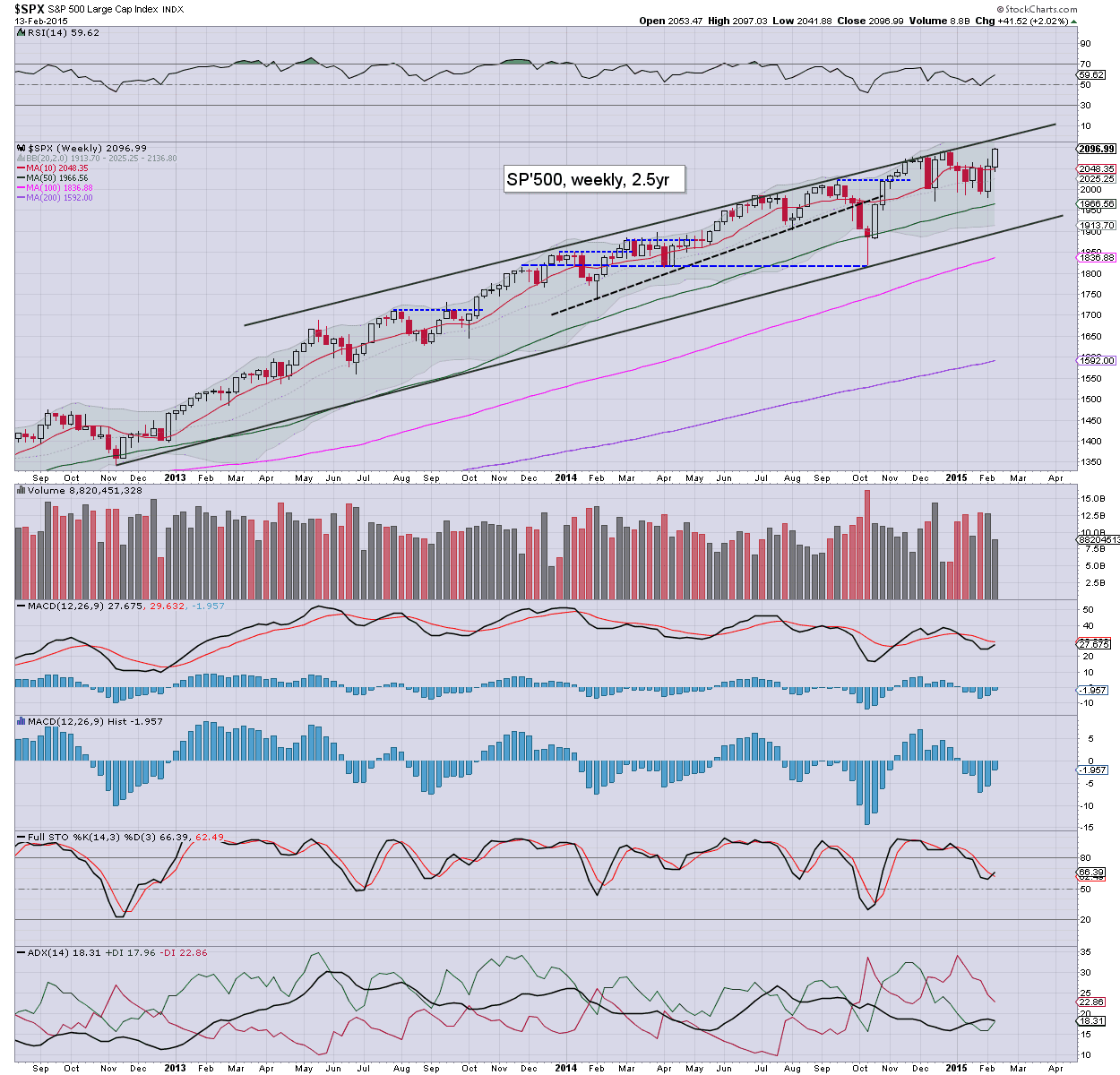 A very solid net weekly gain of 2% for the sp'500, breaking a new historic high of 2096. The gain made for strong follow through from last week's hyper ramp from the sp'1980 low. Indeed, it is pretty notable that the market has climbed 116pts across just ten trading days.

Underlying MACD (blue bar histogram) cycle is set to turn positive cycle at the Tuesday open. Upper weekly bollinger will be offering the 2130/40s next week, although daily cycles will likely restrict that to 2110/20s.

Without question, there is simply nothing bearish here, and once the 'Greek situation' is resolved - possibly as early as next Monday, the market will have open air into the late spring. It remains highly viable we'll be in the sp'2250/2350 zone by May.... at which point I remain suspicious the US Fed might yet raise int' rates.. if only by a mere 25bps. 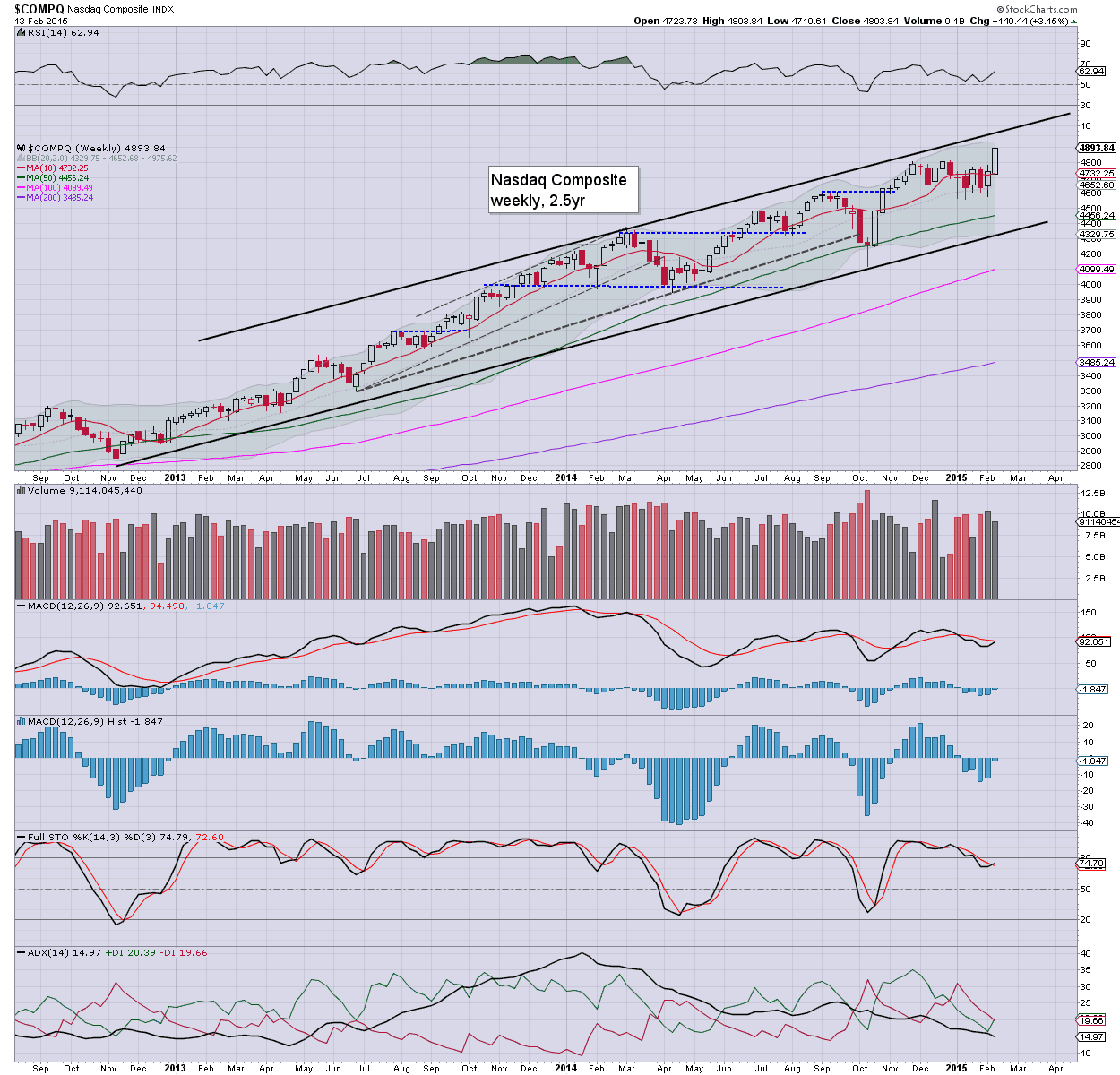 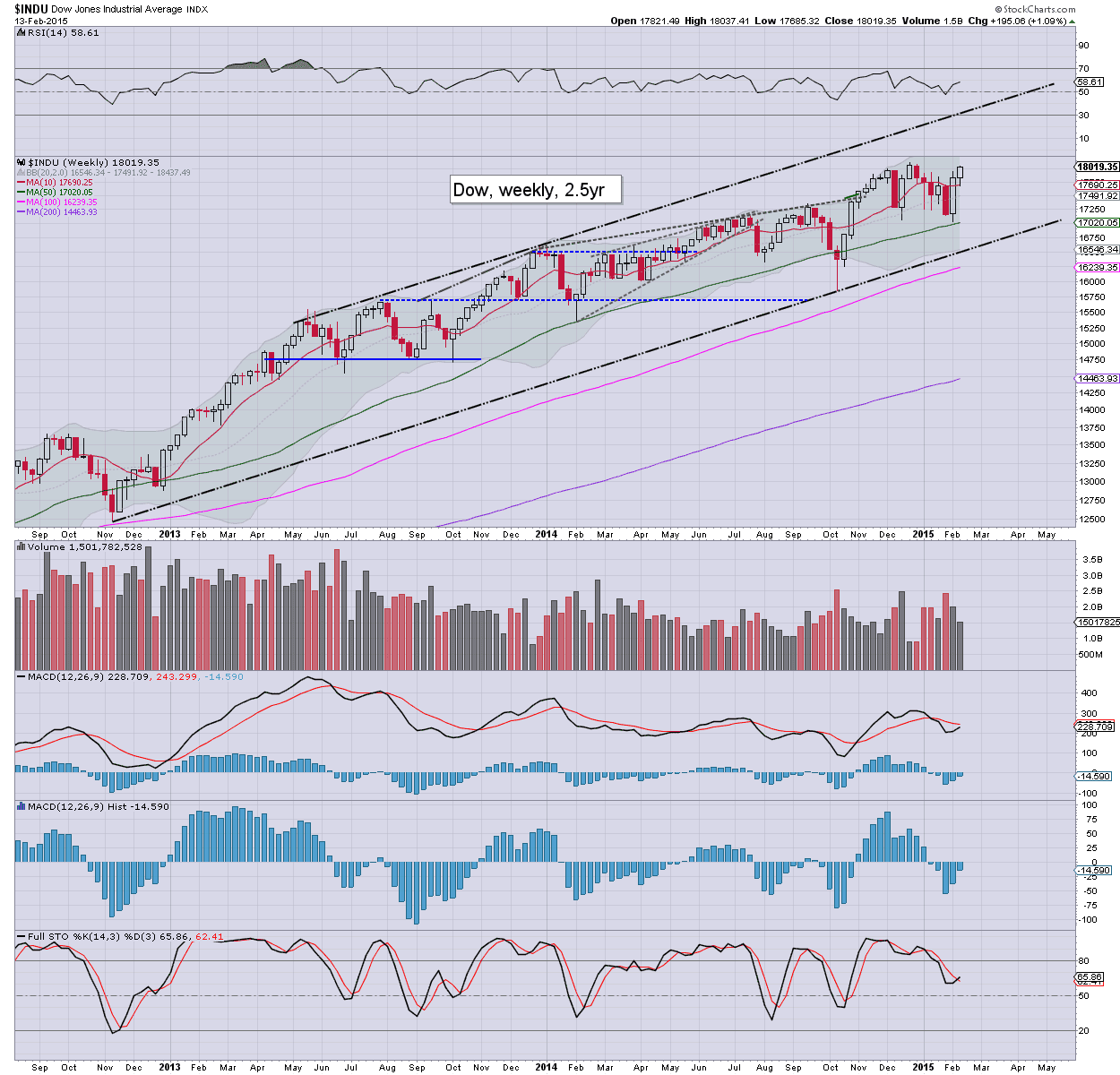 The mighty Dow has swung from last Monday mornings low of 17k to break back into the 18000s in just ten trading days. The next level is the Dec' high of 18103...  and if the Greeks 'play nice' with the EU next Monday, the Dow is set for new historic highs at the Tuesday open. Weekly bol' is offering the 18400/500s in the near term. 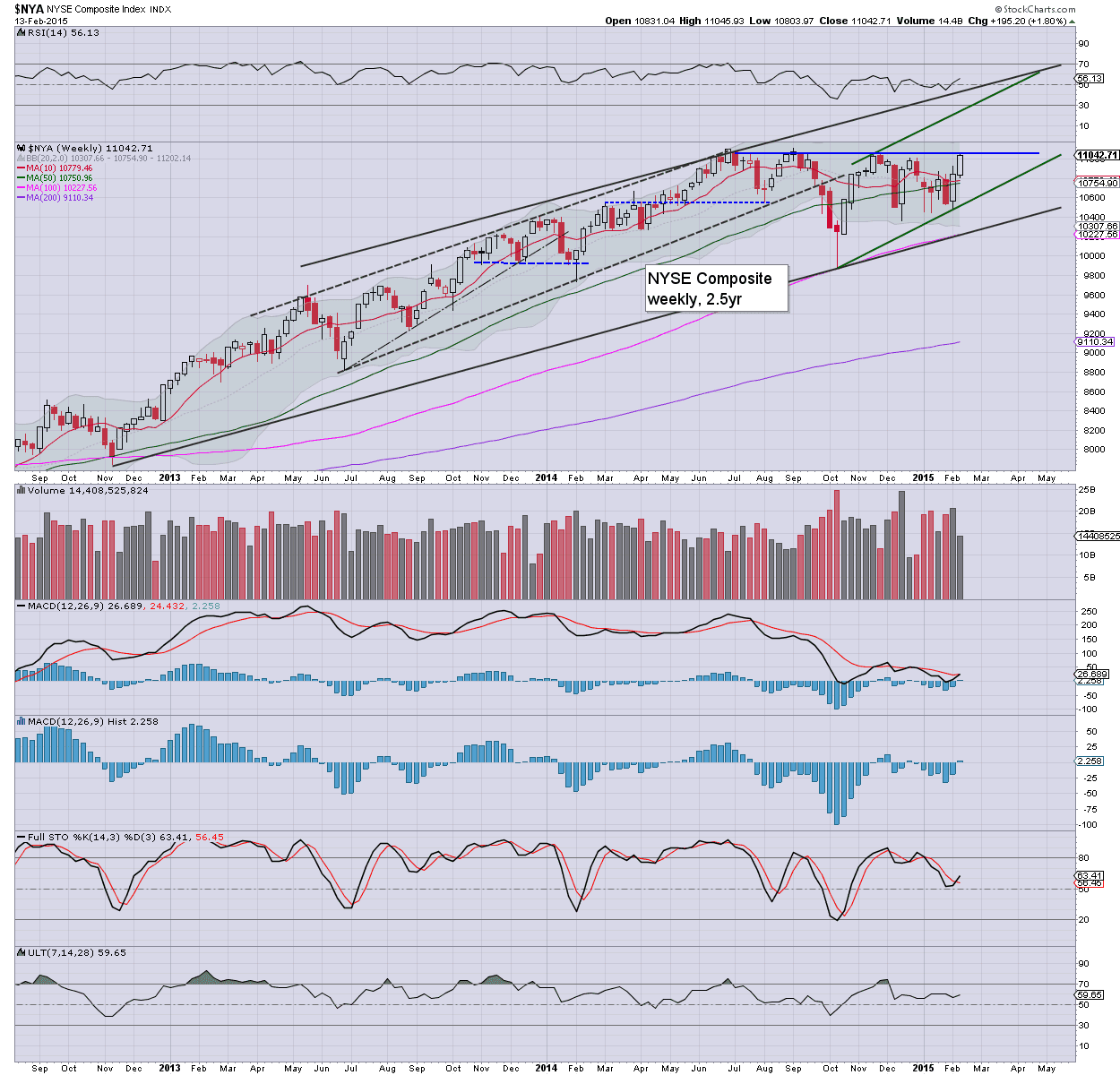 The master index climbed a very respectable 1.8% this week... with a rather notable close above 11k. There looks to be viable upside to the 11200s in the near term. 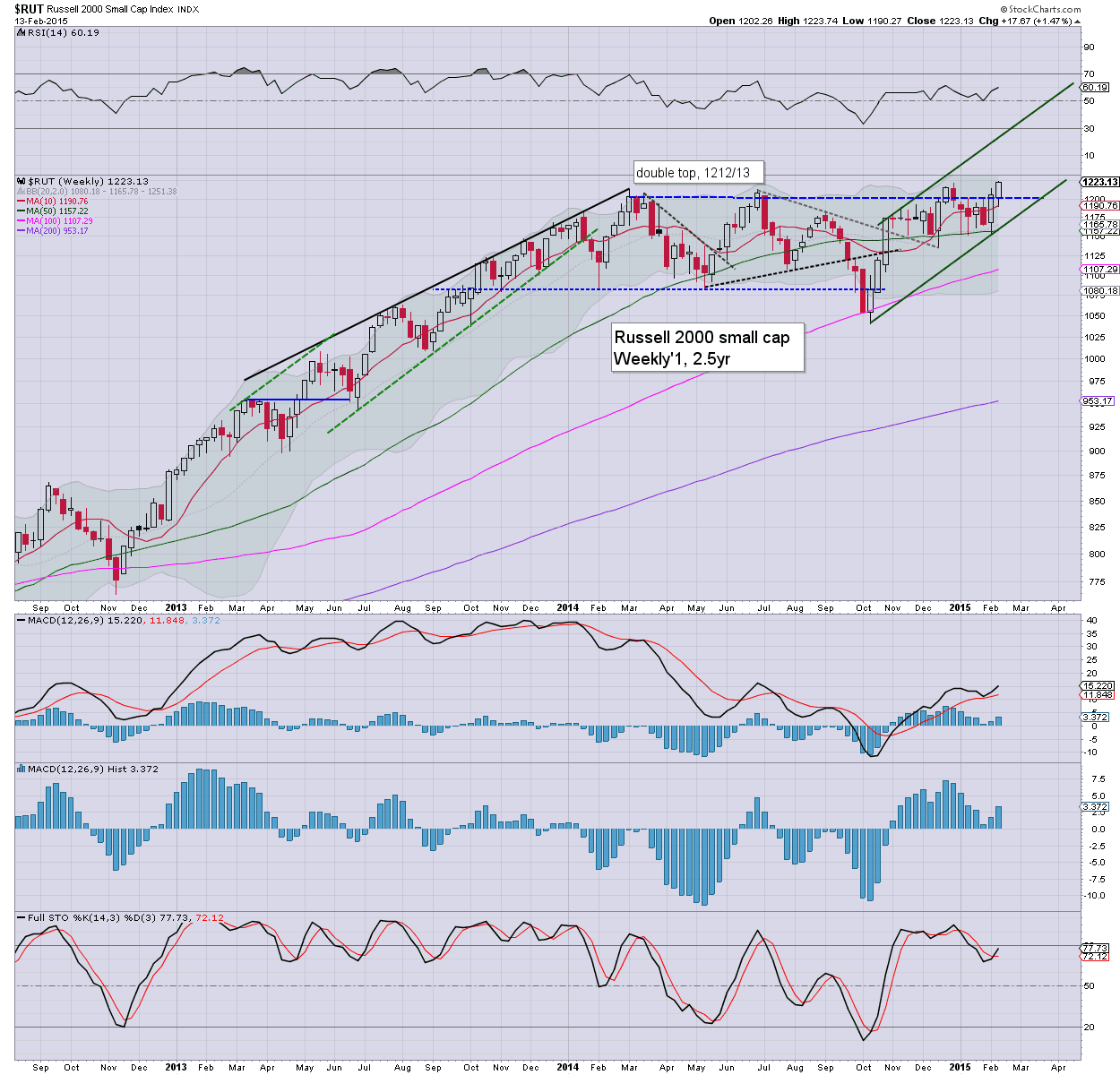 The second market leader broke a new historic high of 1223, with a net weekly gain of 1.5%. There looks to be viable upside to the 1250s before the next opportunity of a minor retrace. Considering last years price action.. R2K in the 1500s remains a very valid hyper-bullish scenario this year. 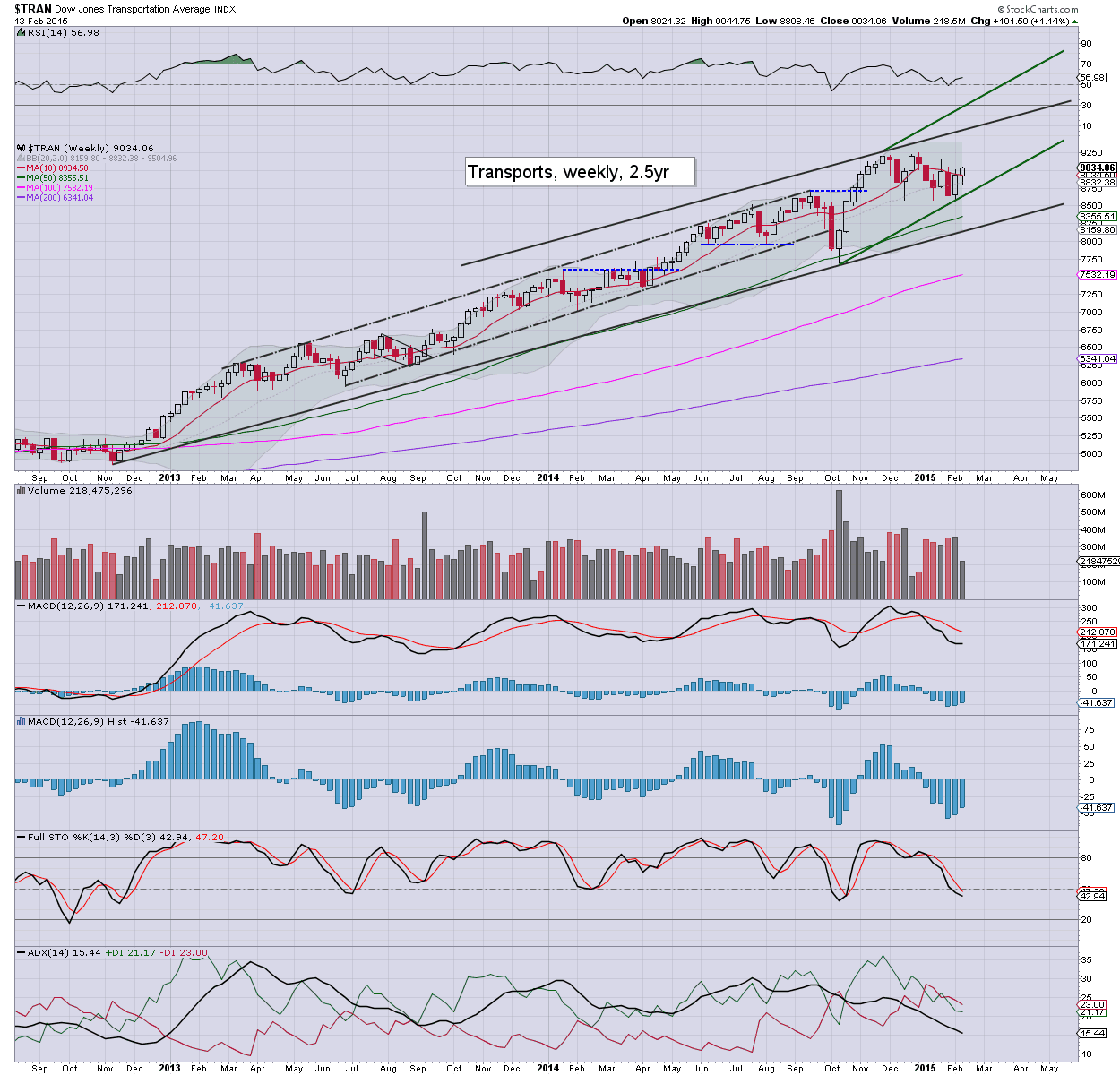 The 'old leader' gained 1.1%, with a notable weekly close above the 9k threshold. Weekly upper bol' is offering 9500 in the near term, which is a further 5% to the upside. The giant 10k threshold looks viable in the late spring. If Oil can break under the recent key low of $43, the transports will get an extra boost.

Without question, the US market saw some significant upside follow through after last weeks hyper-gains. We've seen the sp' swing from 1980 to 2096.. and there is no sign that the market will see even a minor retrace for at least another few weeks.

Sure, the EU meeting next Monday is a major wild card, but on balance, it would seem the Greeks will concede to the Germans/EU, but (laughably) come out and claim a 'victory for the Greek people'. Politicians.... twisted and corrupt by default.

I think the weekly MACD cycle is pretty clear, underlying price momentum is set to officially swing bullish at the Tuesday open, and with the Sp'500 and R2K already breaking new historic highs, there is simply ZERO reason why anyone should be overly bearish right now.

A relatively quiet week is ahead.. and as ever.. that usually favours the bulls.

If the mood takes me, I might post something on Monday (not least about how the EU-Greece meeting has proceeded, otherwise...........I will be back at the Tuesday open.

Enjoy the long weekend
Posted by Trading Sunset at 17:00:00
Email ThisBlogThis!Share to TwitterShare to FacebookShare to Pinterest

Just another year to go.. so says Elaine

After the equity bull maniacs see another historic index high - sp'2096, along with Dow back in the 18000s, it is probably important we reflect upon perhaps the most important prediction of all time... Feb'14th 2016 is now only a year away. 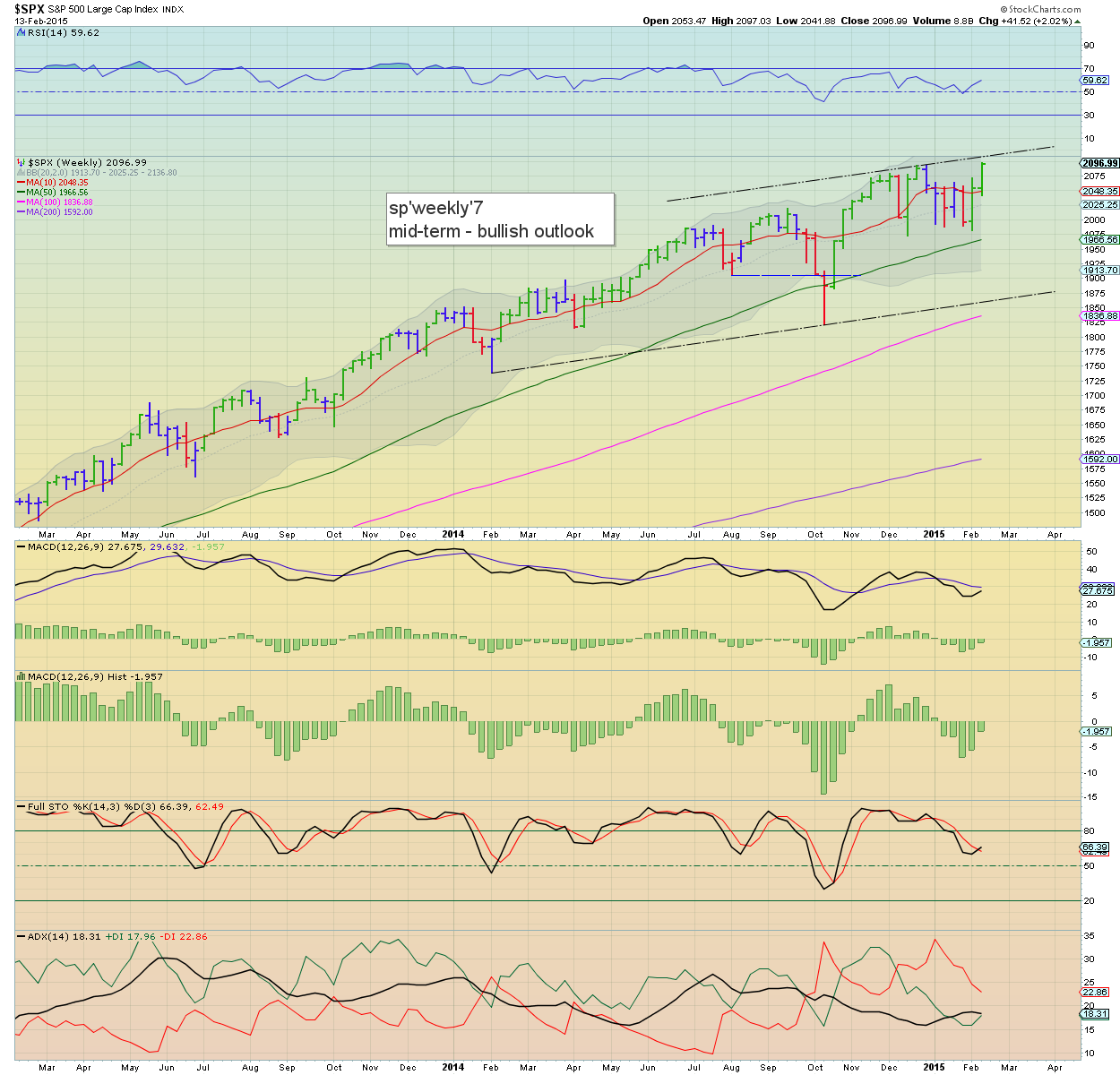 Goodnight from London
-
* the weekend update will on the US weekly indexes
Posted by Trading Sunset at 04:00:00
Email ThisBlogThis!Share to TwitterShare to FacebookShare to Pinterest

US equities closed moderately higher, sp +8pts @ 2096. The two leaders - Trans/R2K, settled higher by 0.2% and 0.6% respectively. Near term outlook offers a small chance of a retrace on Tuesday.. but overall, the broader picture looks strongly bullish across the spring. 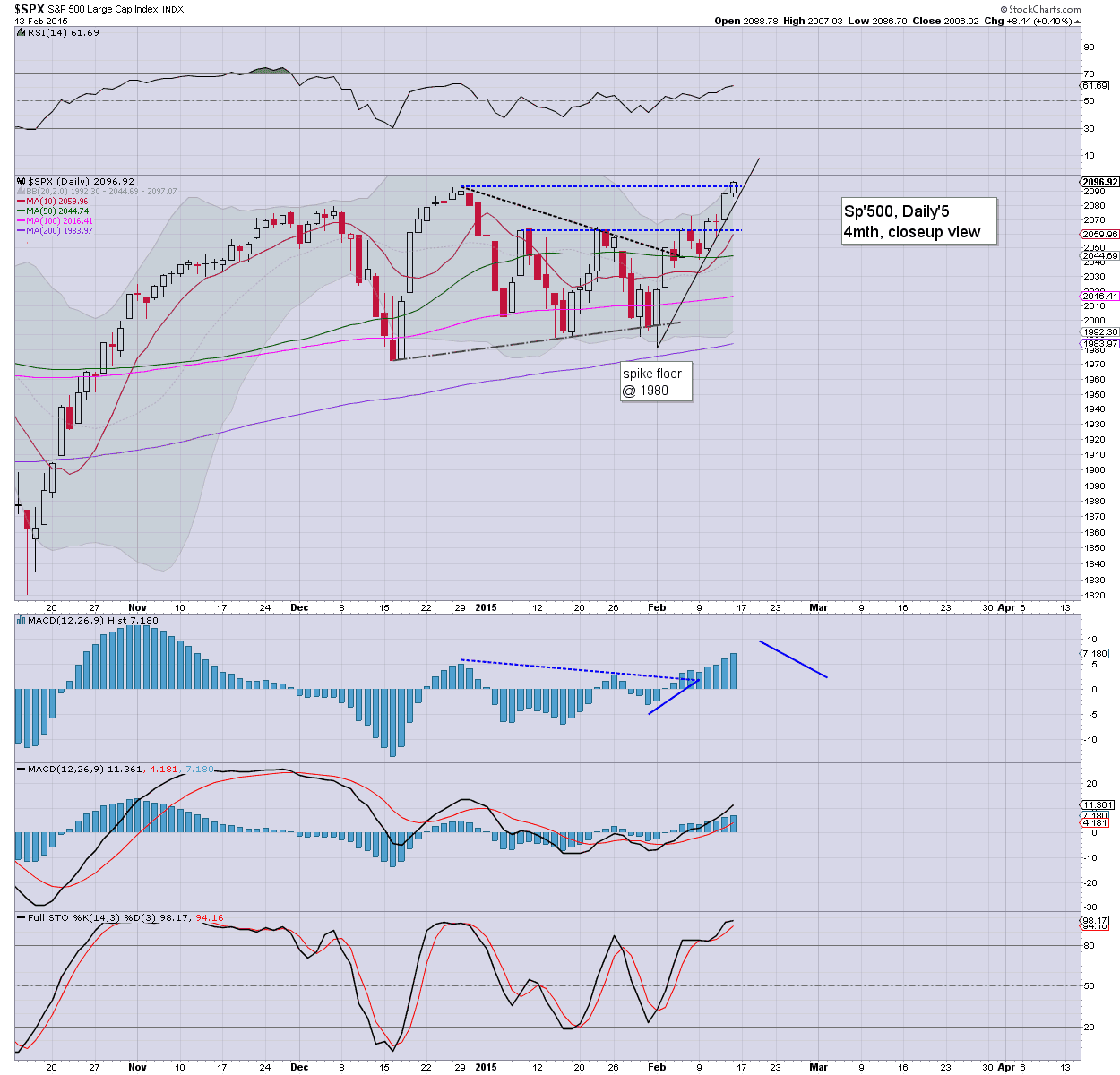 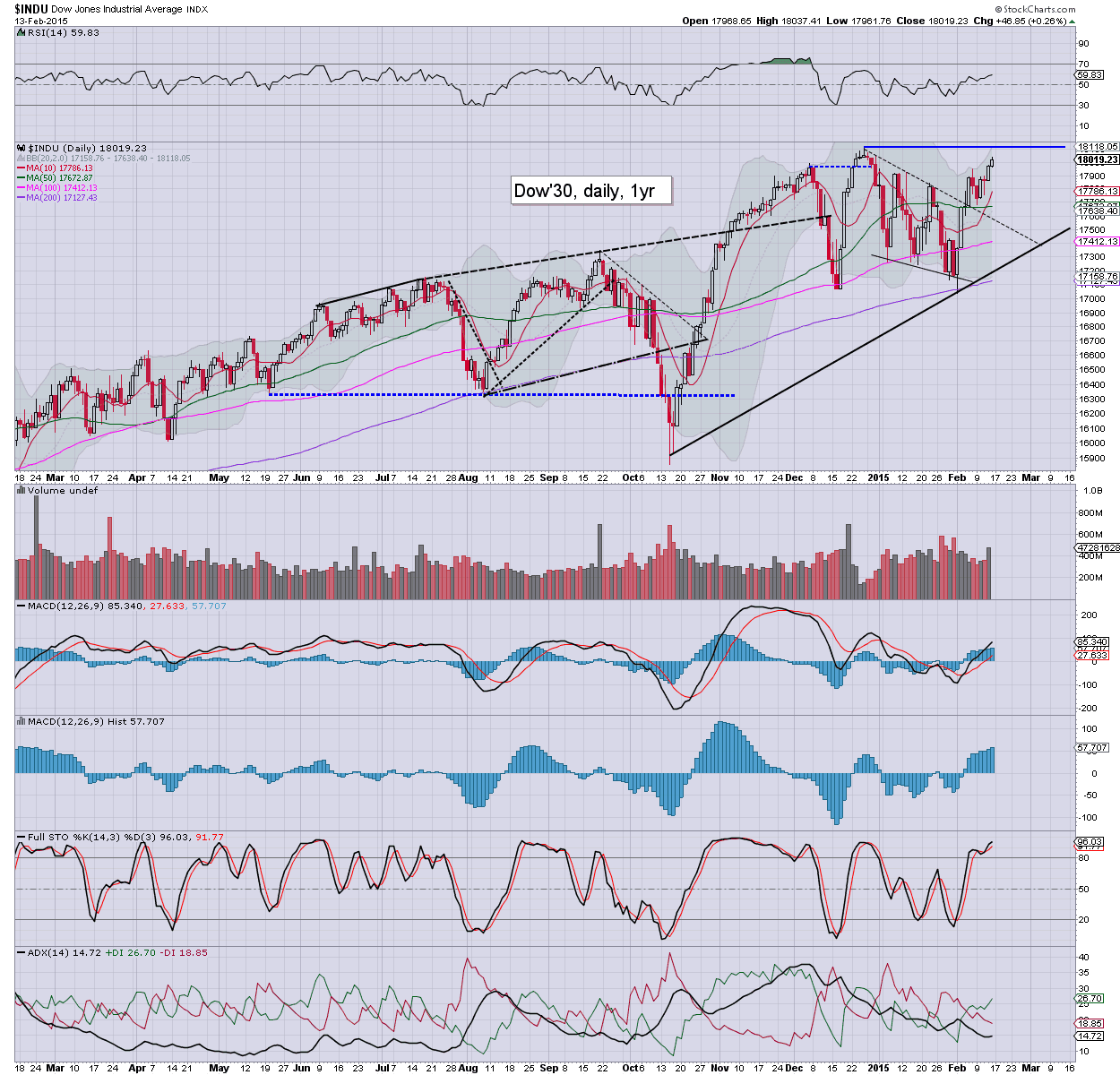 It took almost two months, but the bull maniacs have achieved a new historic high on the Sp'500 and R2K. The Dow, Trans... and NYSE Comp'.. all look set to follow.