The SP weekly chart sums up what has largely been another pointless week. 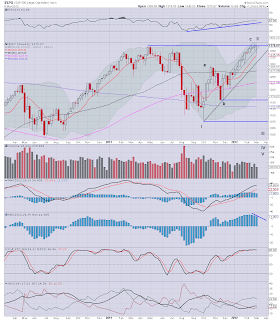 more over the weekend....
Posted by Trading Sunset at 21:05:00
Email ThisBlogThis!Share to TwitterShare to FacebookShare to Pinterest

What had been a super Tuesday has lead to a minor bounce on Wednesday, but then also a more worrying continued up move today. It has always both bemused and thoroughly depressed me how losses are so easily negated. How many months did bears wait for a 200pt fall, and now that has been wiped away after just 2 days of low-vol' melt. Urghh. 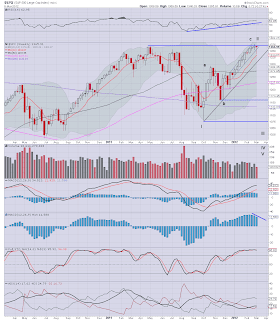 We still have a very viable 3 week top being formed, but if we make new highs in the coming few trading sessions then that idea clearly gets junked. Again, we need to see...

*Lets remember that both the Transport and the Rus'2000 indexes have already conclusively broken the October trend.

The one solace for the bears - see the MACD cycle, which is still in the early stage of rolling over - although that often does not equate to falling prices until it is often close to going negative. 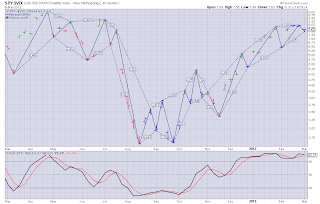 We still have vague signs of a top, but unless Friday offers a dow -100 day or better, this really could be just teasing the bears. The 5.0 level remains a key level in this quirky chart.


SP' Daily, the bearish near term 'if only' scenario 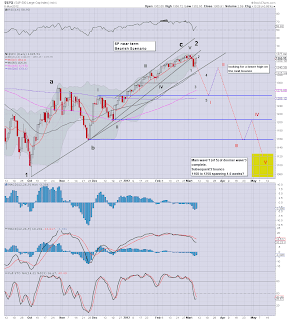 The 1300 level would be a VERY natural level for this market to visit before further moves higher. If the last 2 days were indeed a wave'2 higher, then the next move should be significantly stronger. A move to maybe 1330/20 - at least, before a tiny 4' up, and then a 5' to hit the big 1300 level.

Once a lower high is put in, then the big players will start placing their bets with the serious money.

We have the jobs data on Friday, as ever, its not so much the numbers themselves, as to how this nonsense casino/HFT rigged mess decides to interpret the data. Will the market use any 'weaker than expected' jobs number to drop this market 2% ? Or will the market like the numbers, attempt to gap straight over 1378, make a new high...and charge forwards?

Despite today's seeming resolution with the Greek bond holders, it'll doubtless linger on for some considerable time, until they really do eventually default - which of course will likely be announced during a weekend so that no one can trade it.

That's probably it for tonight. After today, things are again murky, and thoughts of '..oh no...its happening again' are clouding my overall outlook . Lets see how Friday pans out.  Goodnight

Yours...
in the Bunker...on a diet of tea and chocolate.
Posted by Trading Sunset at 01:22:00
Email ThisBlogThis!Share to TwitterShare to FacebookShare to Pinterest
Newer Posts Older Posts Home
Subscribe to: Posts (Atom)