Volatility back in the teens

With the main indexes closing moderately lower, the VIX managed to claw higher into the close, settling +5.9% @ 13.04. Baring a break <sp'1675, the VIX still looks set to fall back lower into the Friday opex. 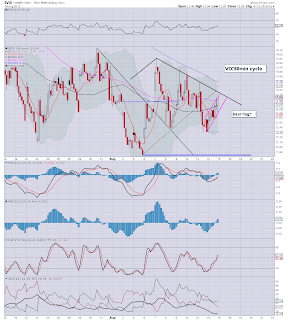 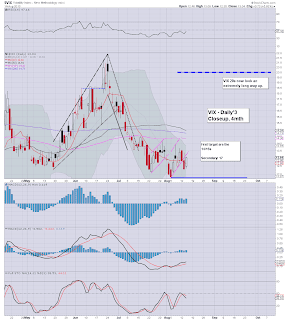 So, volatility climbs a little, and we're back into the teens again. Yet, unless the equity bears can break <sp'1675 tomorrow/Friday, the VIX looks set to simply melt back lower into the Friday/opex weekly close.

With the hourly index charts looking floored from a cycle perspective, the bears are going to find it next to impossible to break 1675..baring a straight forward 'gap below resistance'. I don't think that is at all likely.

Next week looks a lot more interesting, with VIX possibly in the 15/16s.

more later..on the main indexes
Posted by Trading Sunset at 23:00:00
Email ThisBlogThis!Share to TwitterShare to FacebookShare to Pinterest

The main indexes all closed moderately lower, with the sp -8pts @ 1685. Near term outlook for equities looks to be continued minor price chop into the Friday opex. Precious metals and Oil both closed higher, with Silver managing around 1.8% 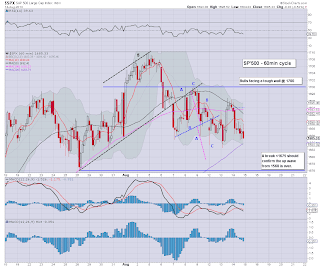 Again, it was a pretty dull day of minor price chop.
--

The market remains trapped within a very narrow range, with equity bears needing a move <1675. Bulls just need anything >1700.


*I remain content on the sidelines, seeking an index re-short after the Friday morning QE, in the sp'1695/1700 zone.

--
the usual bits and pieces across the evening
Posted by Trading Sunset at 21:00:00
Email ThisBlogThis!Share to TwitterShare to FacebookShare to Pinterest

3pm update - stuck in the range

The main indexes remain within the sp1675/1709 zone, that has endured for almost five full weeks! Despite the 'powerless bears', the bulls look similarly tired, and breaking the sp'1700 wall just gets harder each day. 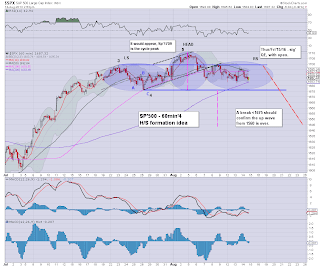 For the closing hour, I don't expect much, perhaps the usual minor melt higher.
-

The above H/S formation idea is just one of a number of leading scenarios. Certainly, it'd be great if it turns out that way, not least for downside next week.

So long as we don't break above 1700, I'm going with the above outlook.

Anyway..from a trading perspective, its pretty clear in terms of stops.
-
Posted by Trading Sunset at 19:55:00
Email ThisBlogThis!Share to TwitterShare to FacebookShare to Pinterest

The morning low has been taken out, but the bears still lack any consistent downside power. If Mr Market wants maximum confusion, it will drop to 1675, but then ramp hard into Friday opex to 1695/1700. Metals and Oil both holding moderate gains. 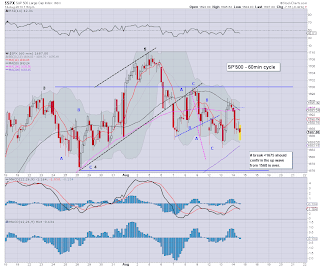 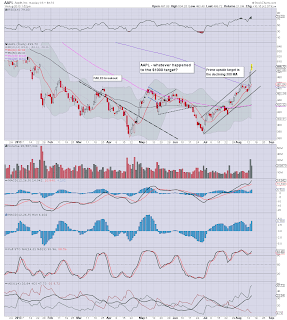 I certainly can't take any of this minor chop seriously. A few pts up..a few pts down...with the VIX in the 12s.

There is a time to trade..and a time to just leave it alone. Surely, its the latter right now?

Bears really need to keep that QE-pomo in mind, especially if we close today weak..and open Thursday in the 1670s. That would make for a nasty whipsaw back upward into late Friday.
Posted by Trading Sunset at 18:54:00
Email ThisBlogThis!Share to TwitterShare to FacebookShare to Pinterest

The main indexes look to be holding the earlier low of sp'1686, with VIX maxing out at 12.79. Precious metals and Oil are holding moderate gains. Bulls seem unlikely to break 1700, but then..neither do the bears look able to break <1680 until next week. 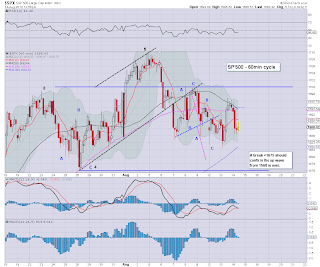 Relatively quiet day...unless you're an AAPL/CREE stock trader. More on those later.
--

Without question, for most, there is no point in trying to trade this.

I remain content to wait until Friday.
Posted by Trading Sunset at 17:58:00
Email ThisBlogThis!Share to TwitterShare to FacebookShare to Pinterest

The main indexes remain very choppy in a very tight trading range. The bulls don't want to buy above sp'1700, whilst the bears still seem unable to break into the 1670s. VIX is higher, but only +3% at 12.75. Precious metals and Oil are both moderately higher. 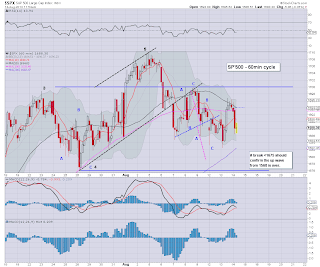 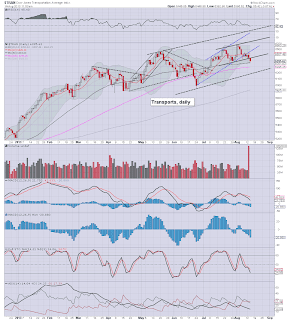 *transports are indeed  especially weak, and I'm not sure what to make of that giant volume spike on the daily (although that is yesterdays closing candle..NOT today!)
--

Neither the bulls..or bears look able to break out of the current trading range this week.
--

For the bears, there remains the problem of sig' QE tomorrow and Friday.

So long as don't put in any daily closes >1700, I'll have little concern with launching a re-short for next week...but no earlier than late Friday morning.

time for lunch
Posted by Trading Sunset at 17:00:00
Email ThisBlogThis!Share to TwitterShare to FacebookShare to Pinterest

The hourly index charts are rolling over again, and we're seeing some weakness, yet this remains the same trading range of the past four weeks. Its all minor chop..and the bulls will likely battle higher into the late afternoon. 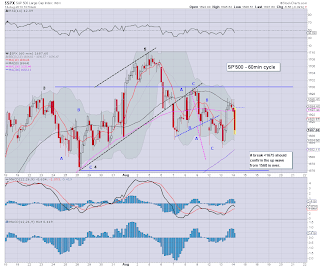 --
I just can't take any of these declines seriously.
Posted by Trading Sunset at 15:55:00
Email ThisBlogThis!Share to TwitterShare to FacebookShare to Pinterest

Another day where the market opens moderately lower, but with the bears still powerless, there is no follow through. However, bulls will continue to find it tough to break the sp'1700 wall. Market looks set to remain stuck between 1700/1680 into the Friday close. 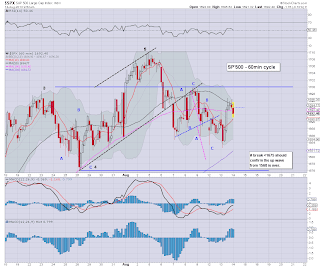 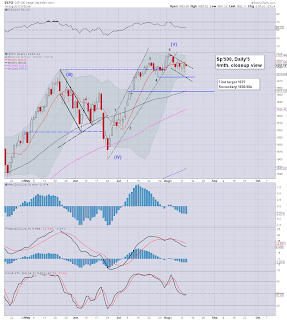 *one thing the bears should be particularly concerned about are the daily index charts. From a MACD cycle perspective, we're just starting to turn upward again..and that's from the sp'1690s..

--
It is a very marginal situation..and I'm not going to get involved until after the Friday QE is out of the way.

-
Interesting ones to watch remain CREE and AAPL.
Posted by Trading Sunset at 14:54:00
Email ThisBlogThis!Share to TwitterShare to FacebookShare to Pinterest

Good morning. Future are moderately lower, sp -4pts, we're set to open at 1690. Precious metals are a touch higher, Gold +$3, whilst Oil is -0.4%. Dollar is flat. Bulls will again be seeking to break back into the 1700s, and that still seems a target too far. 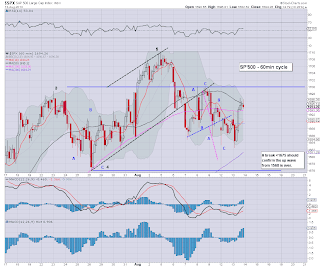 So..once again we have a market set to open a little lower, but its nothing significant, and the bulls will be set for another 'latter day recovery' as the day develops.

Hourly charts are suggestive of downside for some hours though, so bulls are going to find today tough.
-

Regardless of how we close today, bears need to keep in mind the week will end with two major QEs, along with what will likely be minor chop into opex.

*AAPL is already up almost $5 @ $494...a test of the big $500 looks very viable today.
Posted by Trading Sunset at 13:40:00
Email ThisBlogThis!Share to TwitterShare to FacebookShare to Pinterest

The markets continue to trade sideways into August opex, but the bigger picture is offering a small possibility of what would be a very exciting downside scenario for the autumn. For the bears, an initial hit of the lower weekly bollinger - currently @ 1543, will be stage'1. 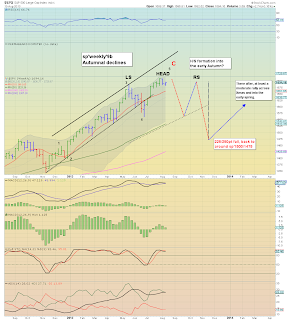 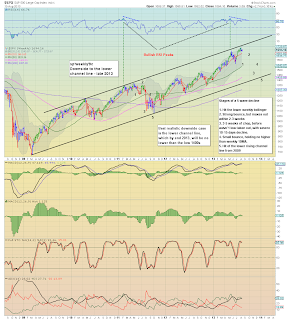 Well, another rather dull day in market land, but then, its sleepy August. Indeed, I have to wonder if it will remain quiet all the way into the Labor day holiday of Mon' Sept'2. I'm guessing we'll at least fall to the sp'1660/50s before then though.

The above two charts remain a 'mere hope'. I am reasonably confident of an initial wave lower into September, but the subsequent bounce had better be contained quickly, or I fear we'll just rally all the way into spring 2014.

For the moment, they are mere scenarios, and until we see stage 1 and 2...I certainly won't be seriously considering the likelihood of a return into the sp'1400s.

Even Zerohedge covered the above chart scenarios today, and there are certainly many others out there also keeping it in mind.

Wednesday has producer prices, and the usual EIA oil report at 10.30am.

I remain on the sidelines, and looking to side step the next two big QEs of this Thurs/Friday, along with the likely minor price-chop of opex. I will be looking to pick up an index short, perhaps late Friday, especially if the market remains stuck in the sp'1695/1700 zone.

The headline indexes closed moderately higher, with the sp +4pts to 1694. However, the two market leaders - Trans/R2K, were weak, slipping 0.65% and 0.16% respectively. Near term outlook is moderately bullish, but the sp'1700 wall remains a tough one to break. 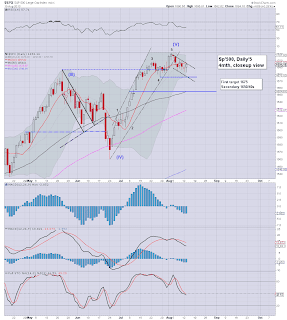 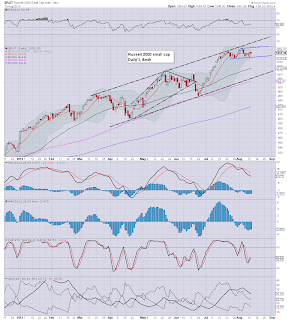 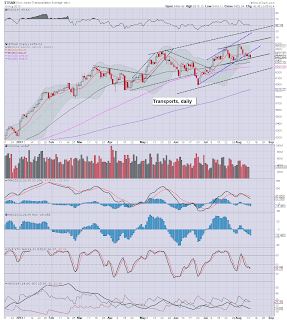 A relatively dull day in market land. The usual moderate morning declines didn't last (no surprise there)..with the bulls buying the dip into the afternoon.

Yet, neither could the bulls manage to push into the low sp'1700s.

--
Near term outlook is for further minor chop into opex, before a renewed push lower next week, into the sp'1660/50s.