Most of the world equity markets climbed for another month, but there are some interesting signs of weakness out there. Most notable is Japan, which saw a 15% reversal, just a touch under multi-decade declining resistance. 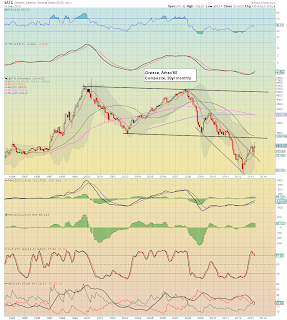 Greece has of course already collapsed, both in terms of its economy, and indeed, as a sovereign state. No longer is it in control of itself, it is now merely a case of how fast the 'real assets' such as land, are sold off to the elite.  I don't envy them, but neither do I pity the Greek people. They made their choice at the recent elections. Now they can live with it.

In terms of the Athex index, it climbed 4.1% in May, but it closed well below the high, and that is one rather significant spike, suggesting a mid-term high has been put in. However, there is still nothing conclusively bearish yet. 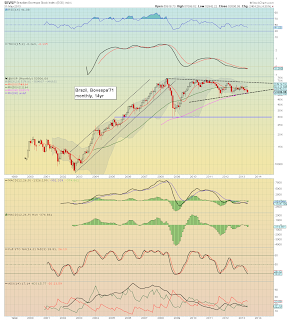 The Bovespa fell 4% in May - which makes for the fifth consecutive monthly decline, and is now on the edge of breaking below a major threshold. It is arguable that a monthly close <50k, will open the door to 30k - all the way back to the 2009 lows. Those equity bears seeking a warning of 'weakness from the BRICs', may be about to get one. 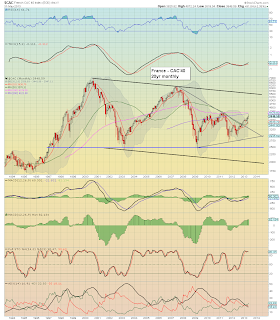 France itself continues to be mired in ever more Govt' meddling and control. It won't end well of course, and there are already endless examples of capital outflows, much of which is flooding into other superior EU states - most notably Germany, but also into North America.

The CAC managed moderate gains of 2.4%, and so far, there really isn't any change in trend. 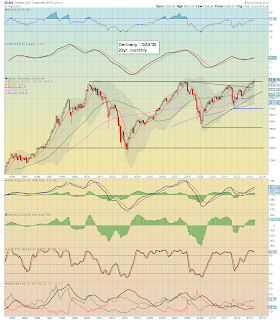 The powerhouse of the EU economy managed a new historic monthly close. There isn't anything bearish here. The DAX could easily hit 9k...even 10k later this year...so long as the QE continues., and no 'baby black swans'. 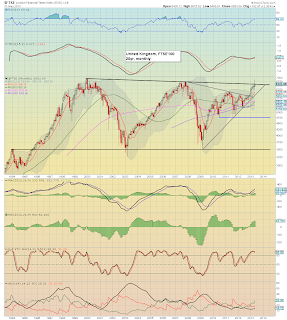 The UK remains a bizarre case of a nation in denial. With very little manufacturing left, and the bulk of 'production' is now via financial services, which of course don't actually produce anything of real intrinsic value.

Unlike the CAC, or the even more stronger DAX, the FTSE closed May with a rather spiky candle after earlier gains. Equity bears merely need to see a moderate decline in June, and that would open up a swift decline, first downside would be somewhere around 6k, which is almost 10% lower. 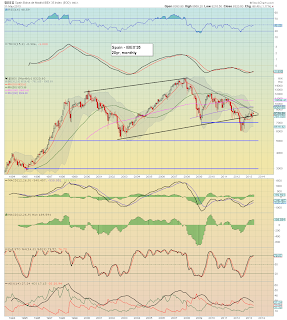 One of the two ugliest of the EU PIIGS, the Spanish economy remains in terminal decline. It remains truly ironic how subdued the Spanish people currently are, despite mass unemployment, and a Govt. that will no doubt eventually implement severe capital controls - as is the case in Cyprus.

The IBEX has always been one of the weakest indexes, it never recovered, and is still stuck under long term declining resistance. The monthly decline of 1% might be just the start, first downside target is 8k. A monthly close <7k, will reopen the long term target of 5k.

If there is any EU upset later this summer/autumn - whether as a result of Merkel getting kicked or whatever, the IBEX will be the first market to get trashed. 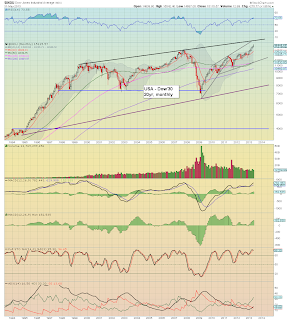 With the Fed continuing to throw 85bn a month at the US capital markets, the US indexes remain relentless bullish. The Dow managed another 1.9% monthly gain, and looks set for 16500/17k within the next 2-3 months.

If the Fed cuts the QE-POMO program - at least in half, then the US indexes will start to weaken, but there is huge support @ 13500 (see weekly chart). It would seem near impossible for the US markets to be trading <13k this year. 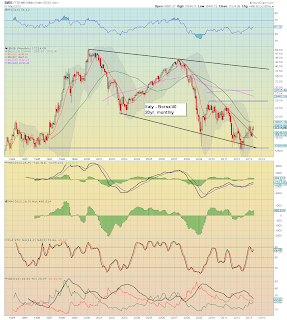 The other of the two huge EU PIIGS - Italy, managed a May gain of 2.7%, but it remains one hell of a battered index. First key upside target is 25k, but that is almost 45% higher, and with some kind of EU upset viable this autumn, it'd be surprising if the Borsa doesn't get whacked lower again. Mid-term downside would be 15k, which is about 12% lower. 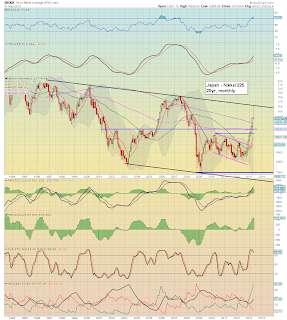 Japan is unquestionably the most interesting and exciting index to watch lately. With the JCB throwing even more money than the US Fed (roughly 2x as much, per capita), we've seen the Yen get trashed, and that has lead to a very natural rise in the Nikkei. Of course, much of the rise is simply the JCB - along with 'some' other of the central banks, actively buying equities.

The monthly candle for the Nikkei makes for one hell of a reversal candle. Even though the net decline for May was just 0.6%, this was 15% lower than the intra-month high of 15942. As I noted at the start of the year, primary upside was around 16k, and effectively, that target has now been hit, and we've seen a VERY strong reaction off this declining trend/resistance.

So...where now? First downside is 12k. Any monthly close <11k, would be highly suggestive that ALL the gains from this seven month hyper-ramp will evaporate, with a return to the 8/7k level.

The underlying problem with Japan remains one of demographics. Rather than print huge amounts of paper, maybe the JCB should try to start printing 2-3 million babies a year? 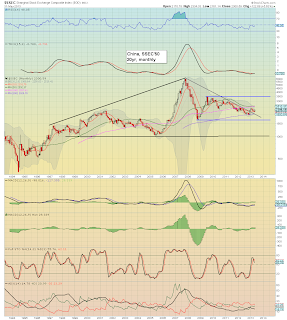 China is still largely shrouded in a cloak of secrecy, not least in terms of its GDP data. Yet, it does have one of the worlds best manufacturing economies now, and will no doubt be fine across the decades ahead.

In May, the Shanghai Composite gained a very impressive 5.6%. Price formation on the monthly chart is a very clear baby bull flag. A break above 2500 will open up a late 2013/early 2014 move to around 3500, that's a good 47% higher, and would bode VERY bullish for the broader Asian equity markets.

So, it was a bit of a mixed month across the world markets. We have many of the indexes still pushing higher, but then we have Brazil down for a fifth month - on the edge of key support, and with Japan putting in a rather classic reversal/fail candle.

Generally speaking, the broad trend remains largely UP, and this is no doubt a result of the continued massive QE that remains ongoing in many nations. I can only imagine that if there is ANY sign of weakness, we'll see QE at least maintained, if not outright increased once again.

There is no reason why other countries won't follow the actions of the JCB, and just ramp up the printing. Indeed, one thing to look for - if there is some kind of major down turn in the next year or two, look for the Fed to start buying equities outright - just as the JCB, and other central banks are now doing.

It would seem my H/S formation that I first suggested earlier in the week was indeed correct. 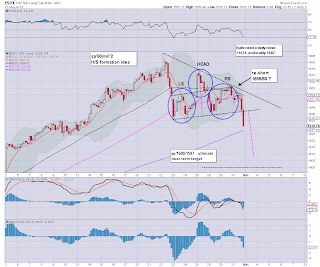 A simple extrapolation (pink line) is suggestive we'll level out around sp'1615/10, this Mon/Tuesday. Also, note the following Fibonacci chart... 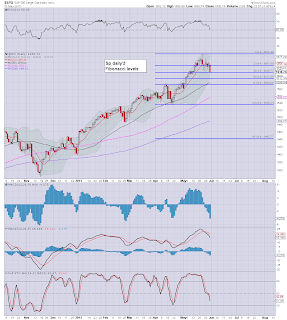 Again, the 1610 area is kinda obvious. In addition, we have the daily lower bollinger around there, and the 50 day MA is just a touch lower..but rising fast.

Best guess..we level out Mon/Tue around sp'1615/10, and then UP. The only issue then is do we put in a lower high <1687, or break yet further new territory. Considering that QE does continue (despite what the incessant chatter might suggest), I'll also guess that we will indeed see the sp'1700s by late June.

There is a little econ-data each day of next week, but as ever, the market will generally be focused on the monthly jobs data. Market is seeking a static rate of 7.5%, with net gains of 167k. Clearly, anything >200k, and it'll be 'summer of recovery, ver'5.0' on clown finance TV.

Based on the last few months of data from the disneyland bureau of statistics, I'd have to assume we'll see the market get the number 'it wants'.

--
As noted, my best guess for early next week is that we'll get stuck around sp'1615/10, and I will most definitely be seeking to go heavy long. I realise that is not what some of you want to hear, but I will continue to call it (and trade it)..as I see it... not as I wish it to be.

back on Monday
Posted by Trading Sunset at 18:38:00
Email ThisBlogThis!Share to TwitterShare to FacebookShare to Pinterest

The main indexes opened moderately lower, then a recovery rally, but saw a rather significant..and consistent drop into the close, with the sp-23pts @ 1630. With the double floor of 1635 being taken out, the next support on Monday will be around 1615/10. 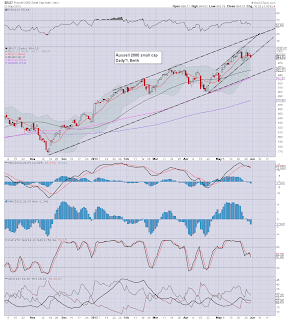 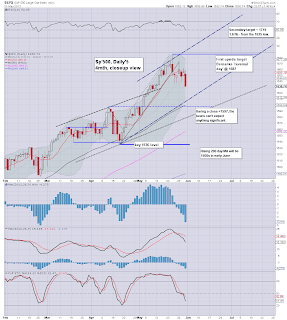 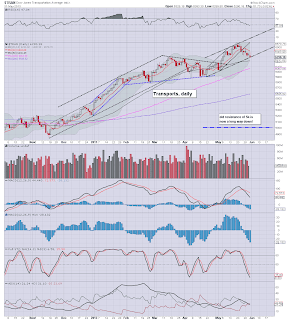 Considering the QE continues, and with the weekly/monthly charts STILL bullish, I have to believe this is merely another micro-pull back.

That's it for today..and the week. Thanks to all those who have commented, its good to hear from some of you out there.

*next main post, late Saturday, which will probably be on the World monthly index charts.
Posted by Trading Sunset at 01:00:00
Email ThisBlogThis!Share to TwitterShare to FacebookShare to Pinterest
Newer Posts Older Posts Home
Subscribe to: Posts (Atom)