With another FOMC announcement, the VIX was briefly flash-crashed to 12.80. Despite renewed equity upside in the closing hour, the VIX closed well above the spike low, settling -7.1% @ 14.33. Near term outlook is for the sp'2K threshold.. and that should equate to VIX in the 18/20 zone. 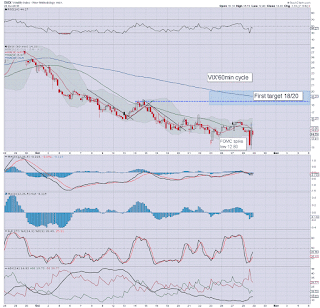 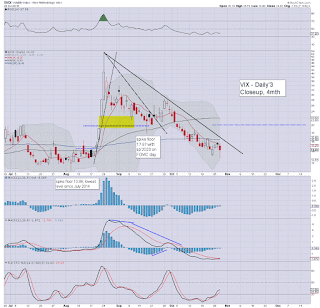 We have a very clear spike floor in the VIX 12.80, which gives some clarity that we're very close to a short term equity peak.

However, sustained action above the key 20 threshold looks difficult.
--

more later... on the indexes
Posted by Trading Sunset at 22:00:00
Email ThisBlogThis!Share to TwitterShare to FacebookShare to Pinterest 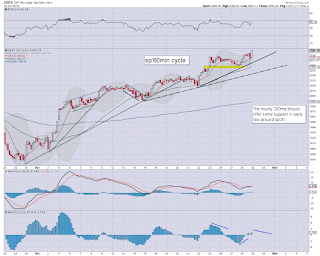 *closing hour: renewed upside.. but the marginal new highs were not particularly reflected in the closing VIX.
--

Despite the closing hour new high, there are clear reversals in other parts of the capital markets... such as the precious metals.

Right now.. I'd only give a probability of 10% or so that we'll see a more powerful retrace to the gap zone of 1950. Frankly.. it seems just too difficult.. relative to recent price action.
--

more later... on the VIX
Posted by Trading Sunset at 20:01:00
Email ThisBlogThis!Share to TwitterShare to FacebookShare to Pinterest

US equities have seen a very clear reversal, from a cycle high of sp'2084 (with VIX 12.80), after the fed press release contains a threat that rates may be raised at the Dec' FOMC. First downside target is around the sp'2000 threshold.. which would be very natural to hit. 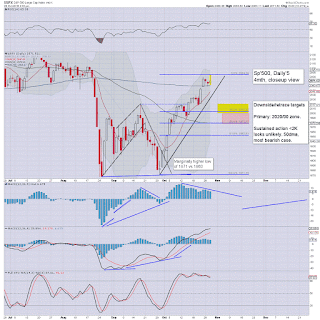 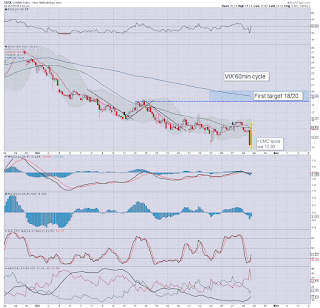 I've added a fib' retrace, and that is itself suggestive that a retrace would at least around sp'2000.

Ultimate 'best case' for the equity bears would be the price gap zone around 1950.. but really.. that looks out of range... and is not supported by recent price action.
-- 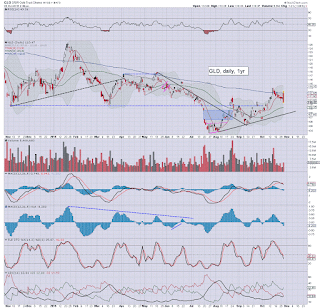 A hyper-reversal candle in Gold (and silver).. as higher rates are BEARISH metals. The fact it has lost the 200dma only adds to the bearishness in that one.

The bigger weekly cycle is offering a giant bear flag. 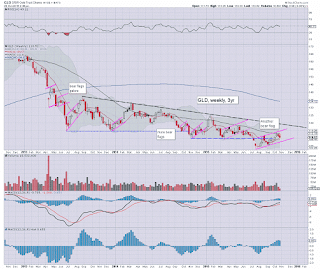 The $1000 threshold remains due.. and that ain't going to help the related mining stocks.

.. no doubt.. the 'gold bugs' out there will disagree with that outlook.
-

Oil set for net daily gains of 6.0%.. which is clearly stupid, considering the growing inventories.
-

Nothing has changed... I'm still seeking renewed weakness from here.
-

Regardless of the closing hour new high.... market is building a short term top.
Posted by Trading Sunset at 18:51:00
Email ThisBlogThis!Share to TwitterShare to FacebookShare to Pinterest

The FOMC announcement is imminent, and it seems a given that interest rates won't be raised.. yet again. The excuse this time could be 'soft jobs data', but whatever is in the press release.... there will be no opportunity for the press lackeys to question (if softly) the Yellen. 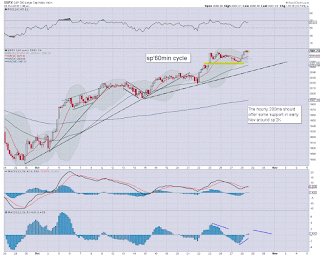 So yes, I'm not expecting any change in rates.
--

Broadly.. a reversal into the close looks a real threat.
--

Cyclically.. we're due a key turn from here
- 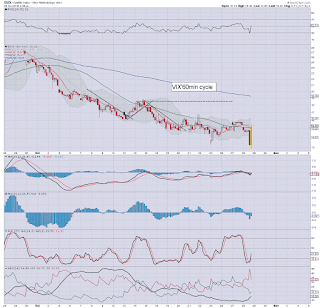 1pm update - churn before the FOMC 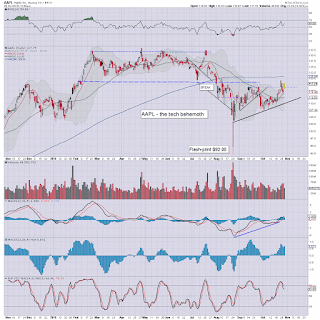 However.. cyclically.. AAPL looks vulnerable to selling lower into mid Nov'.. along with the rest of the market.
--

notable weakness: TWTR, -3.5%.. but that is a clear 7% above the earlier lows... as some of the momo chasers have appeared.

--
Back.. just before 2pm
Posted by Trading Sunset at 16:56:00
Email ThisBlogThis!Share to TwitterShare to FacebookShare to Pinterest

12pm update - bullish sunset.. ahead of the Fed

US equities are holding moderate gains, breaking a new cycle high of sp'2081.. a rather bizarre 53pts (just 2.7%) shy of a new historic high. Despite the gains (including the mini explosion in Oil, +5.6%).. sustained action in the 2100s looks overly difficult. The sun is likely setting on this initial up wave from 1871. 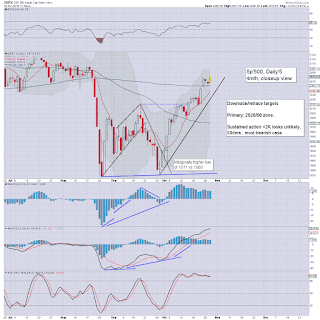 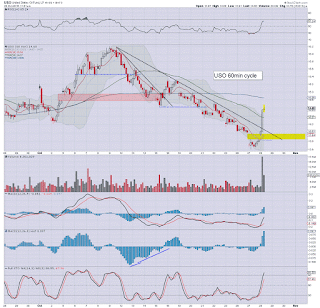 Best guess remains: a spike high/reversal this afternoon...   most realistic downside target is the 2020/00 zone. I suppose a hit of the 50dma (1990/80s) would make for an equally natural retrace/test.

To be clear... I am NOT expecting new lows before year end.

We broke too far above the monthly 10MA...   and broader price action does not support the notion of another severe down wave to the 1800s.. or lower. 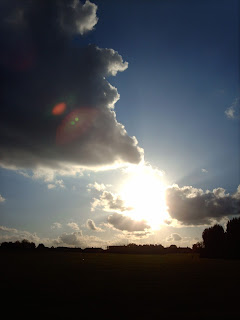 
--
time for lunch
Posted by Trading Sunset at 15:52:00
Email ThisBlogThis!Share to TwitterShare to FacebookShare to Pinterest

US equities are building moderate gains, battling to break new cycle highs in the sp'2080s. Oil has seen a notable explosion to the upside, +4.7% in the $45s, as inventories 'only' rise by 3.4 million barrels. Gold is holding sig' gains of $14. 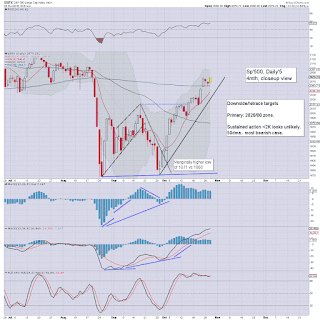 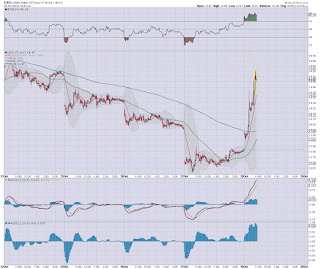 *the explosion in Oil is no doubt largely due to short-covering. The underlying issue of over supply remains entirely unresolved.. as seen in this mornings 'better than expected' number.
--

As for equities.. well, the higher we go before the FOMC.. the higher the risk of an afternoon reversal.

Sustained action in the sp'2100s looks VERY unlikely in the current up wave from 1871.
-

time for some sun... before its too late.
Posted by Trading Sunset at 14:52:00
Email ThisBlogThis!Share to TwitterShare to FacebookShare to Pinterest 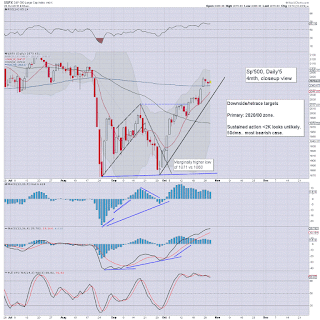 There is little reason to expect any sig' action until the FOMC announcement. The sp'2080s do look due though

It remains VERY probable we'll see a short term top today... with Q3 GDP data likely to be lousy tomorrow... with the market using it as an excuse to trade lower. 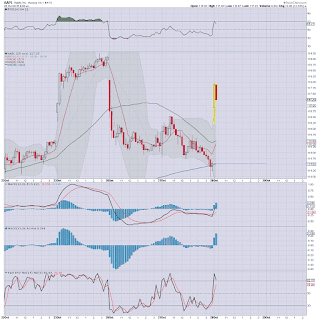 An interesting opening gain... but it looks like sustained action in the $120s is unlikely in the current cycle. 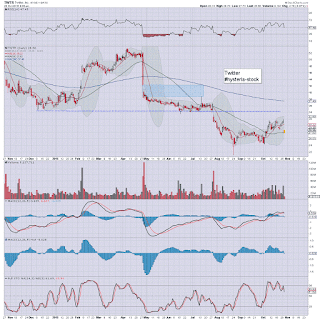 --
... awaiting the EIA report... (10.30am)
Posted by Trading Sunset at 13:55:00
Email ThisBlogThis!Share to TwitterShare to FacebookShare to Pinterest

US equity futures are moderately higher, sp +5pts, we're set to open at 2070. With the FOMC certainly due to announce nothing, the market will likely use it as an excuse to break into the 2080/90s within the near term... before first opportunity of a retrace. 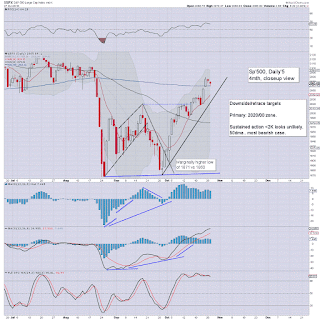 --
Have a good Wednesday
Posted by Trading Sunset at 12:12:00
Email ThisBlogThis!Share to TwitterShare to FacebookShare to Pinterest

Energy prices continue to remain broadly weak, with WTIC Oil settling Tuesday -1.2% @ $43.20, whilst Nat' gas +0.7% @ $2.09 (intra low 1.95). There remain underlying over supply issues for Oil and Gas, and it would seem that problem won't be resolved for much of next year either. 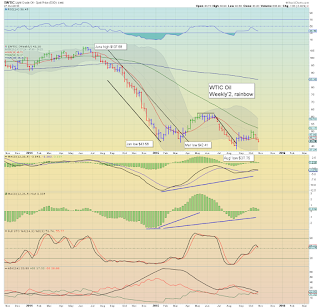 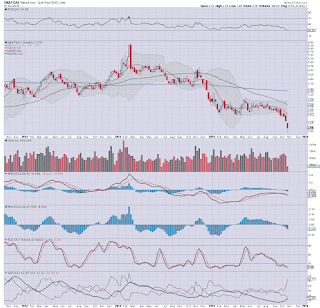 Suffice to add, lower energy prices are going to continue to help the US/world economy.

It continues to bemuse me how some of the doomer econ/equity bears will tout 'see...the market is not breaking new highs.. despite lower oil prices'.. or 'retail sales remain weak'.

Q. Do you think retail sales are going to do better with $100 oil ? .. because logically, that appears to be the mindset of some out there.

There is a policy announcement due at 2pm... there will NOT be a press conf.

US equities closed broadly weak, sp -5pts @ 2065. The two leaders - Trans/R2K, settled lower by -2.6% and -1.2% respectively. Near term outlook is for renewed upside to the 2080/90s.. not least if the market can cope with a dull FOMC announcement and somewhat mediocre Q3 GDP data. 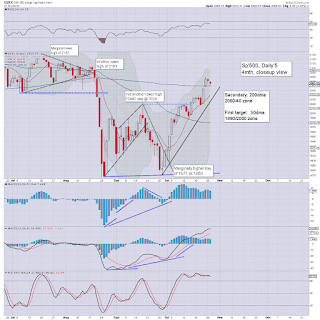 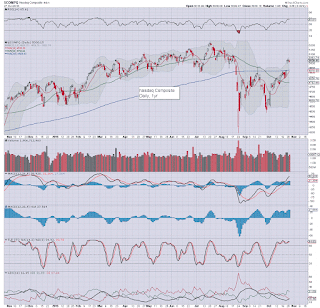 Despite a second net daily decline, the sp'500 - along with other indexes, look set for renewed upside. It is notable that today was the third close above the 200dma.
--