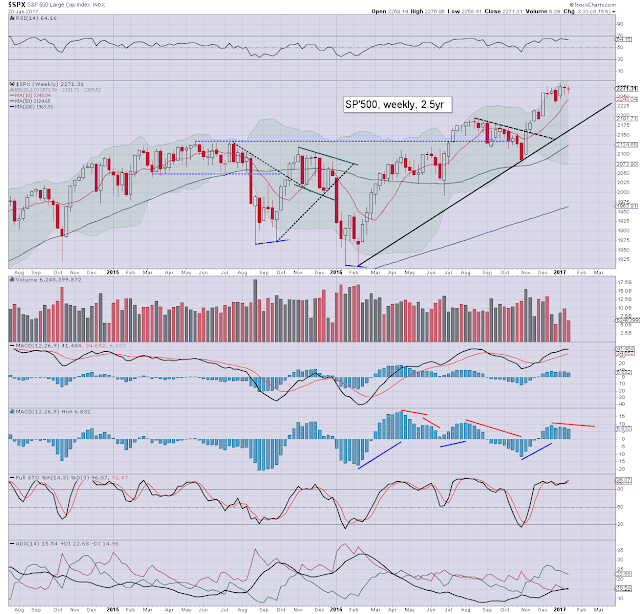 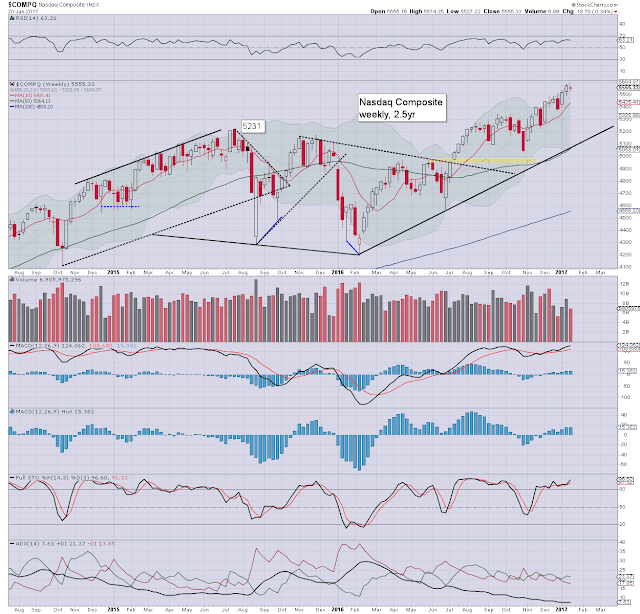 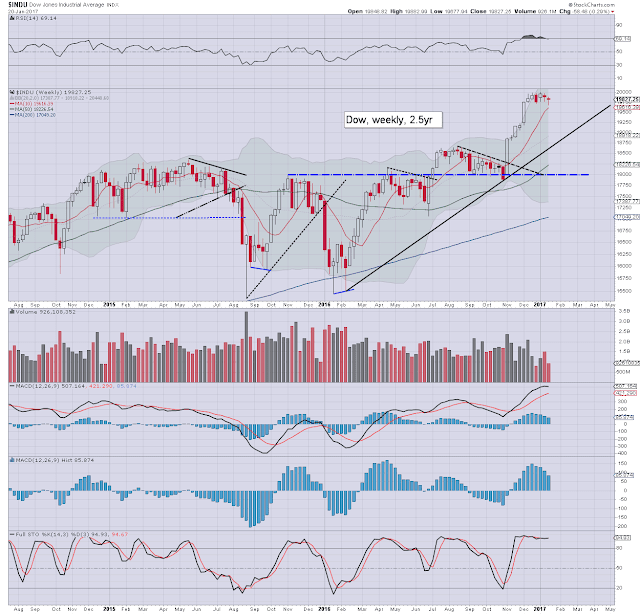 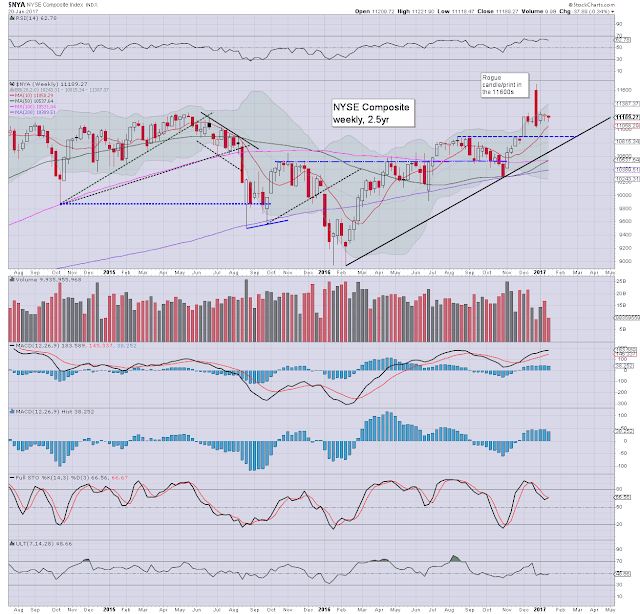 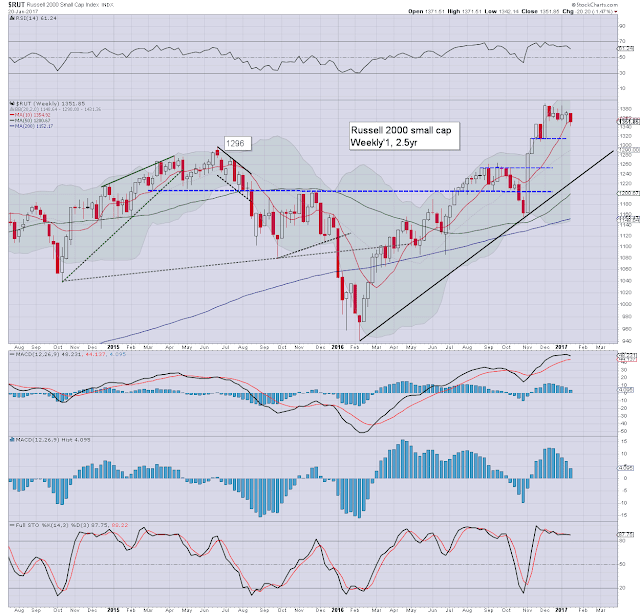 The second market leader - R2K, was the laggard this week, settling lower by a rather significant -20pts (1.5%) at 1351. The 1425/50 zone appears a viable target in about 3 weeks. Underlying MACD is vulnerable to a bearish cross within 1-2 weeks, but instead... a divergent lower high (relative to mid Dec') looks due to occur by mid February. 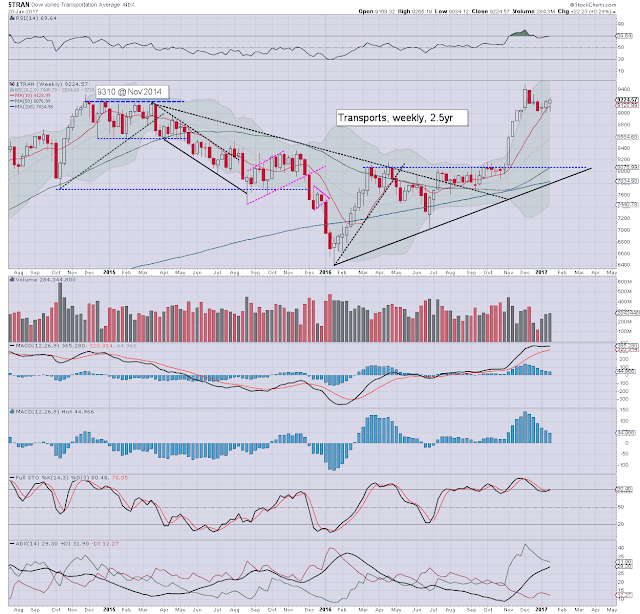 Most US indexes have been in moderate chop mode for around six weeks.

Price structure in most indexes is arguably a bull flag/pennant.

Further upside of 2-3% looks probable by mid February. From there... a distinct threat of a 5% correction, back to the low 2200s. That would make sense as broadly, the market hasn't seen any significant retrace since the hyper ramp from the early Nov' low of sp'2083.

Equity bears have nothing to tout unless we're trading back under the monthly 10MA, and in February, that will be around sp'2200.
--

The first big trading week of the Trump presidency :)

If you value my posts... then subscribe to me.

*the next post on this page will likely appear Monday @ 7pm EST
Posted by Trading Sunset at 17:00:00
Email ThisBlogThis!Share to TwitterShare to FacebookShare to Pinterest 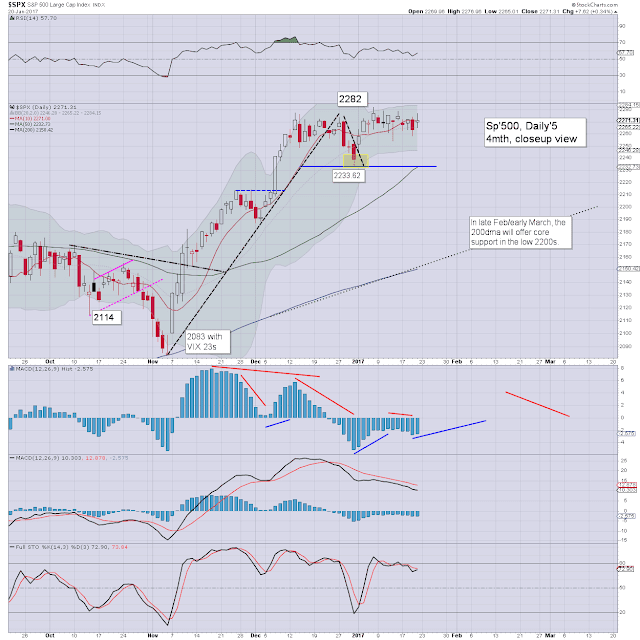 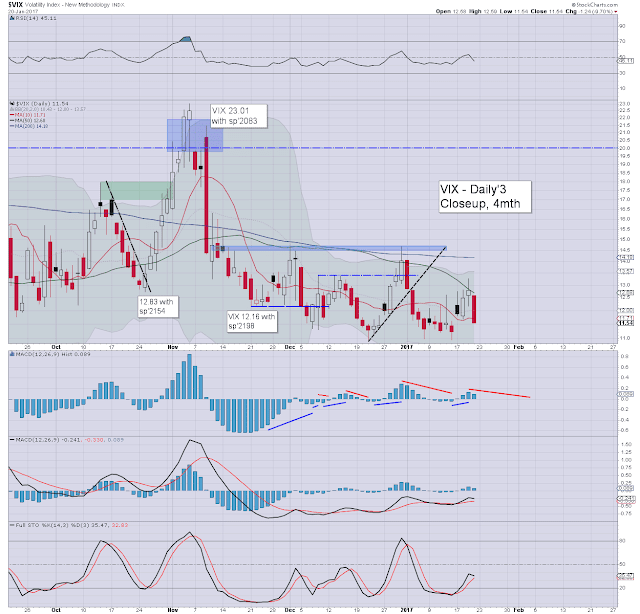 Naturally, as it was opex - along with the inauguration, price action was just moderate chop.. but clearly leaning to the upside. New historic highs >2282 look probable next week... along with Dow 20k.

Its notable that even without Dow 20k, the VIX is back in the 11s again. 10s look due next week. A curious thought it whether we might finally single digit VIX.... last seen Feb'2007.

In any case... whatever you think of Trump.. a new era has begun.

*the weekend post will appear Sat'12pm, and will detail the US weekly indexes
Posted by Trading Sunset at 00:00:00
Email ThisBlogThis!Share to TwitterShare to FacebookShare to Pinterest
Newer Posts Older Posts Home
Subscribe to: Posts (Atom)