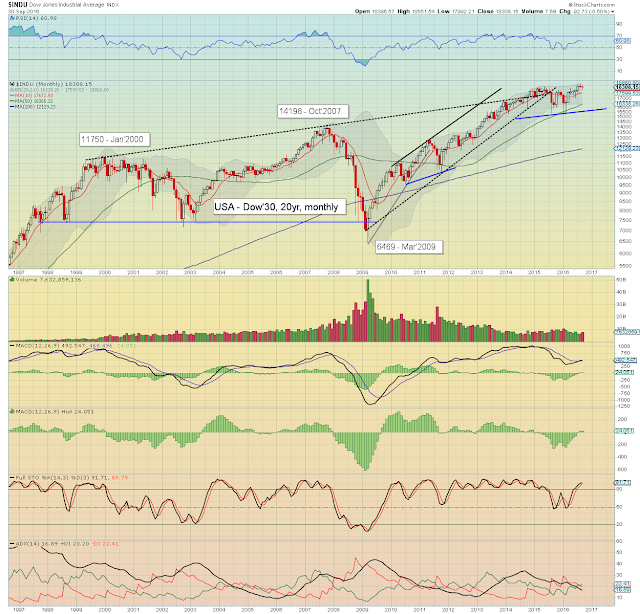 US equities marginally cooled for a second month, with the mighty Dow -92pts (0.5%), settling at 18308. Underlying MACD (green bar histogram) remains positive. Upper bollinger will be  offering the 18800s in October. The 19K threshold looks out of range until after the US election. Any price action >19k, will give clarity that the giant psy' level of 20k will be reached.

Best guess: upside of 3% into Q3 earnings, a little chop through the election, and then another push into the 19000s.

Whether 20K is reached before year end.. or not until early 2017, should be of little importance to those broadly long.

Equity bears have nothing to tout unless a break back under the 18k threshold. Even then, there are multiple aspects of support in the 17600/500s.
-- 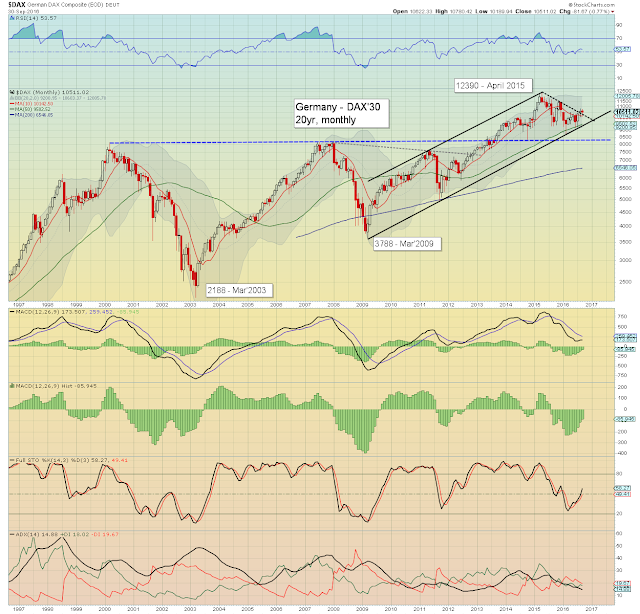 The economic powerhouse of the EU - Germany, saw a net monthly decline of -0.8%, settling @ 10511. The DAX has now held above the 10MA for three months, and is holding above declining trend. Underlying MACD is set to turn positive in 2-3 months. Things only turn bearish <9500. First upside target is 11k, and then the April 2015 high of 12390. The latter is clearly out of range until early 2017. 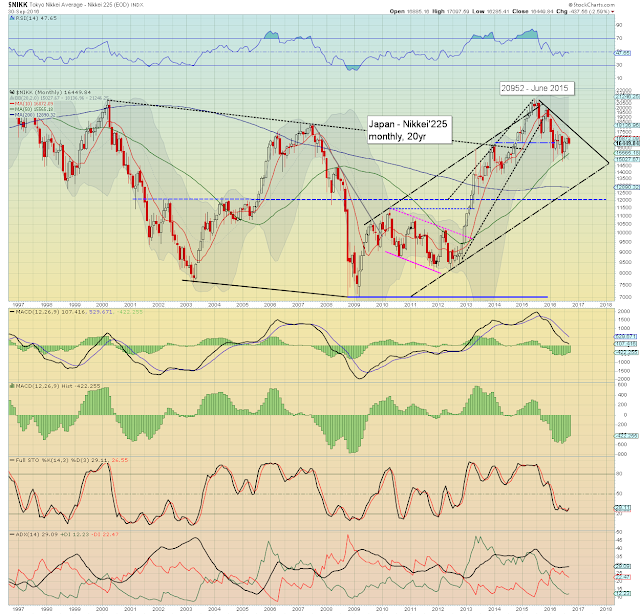 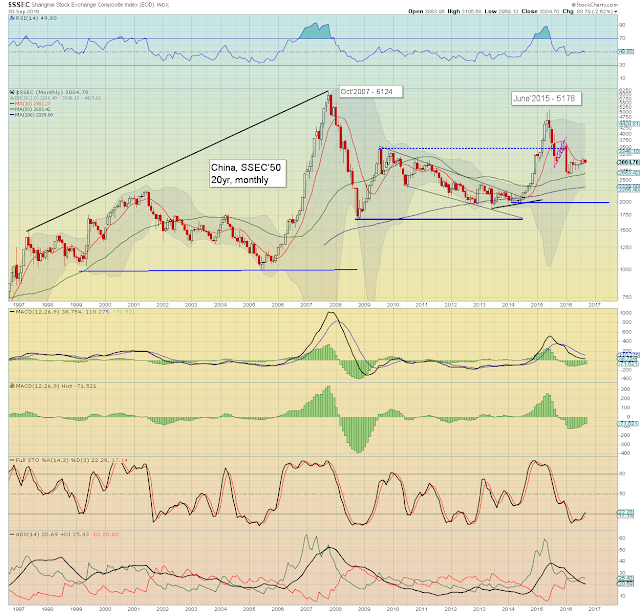 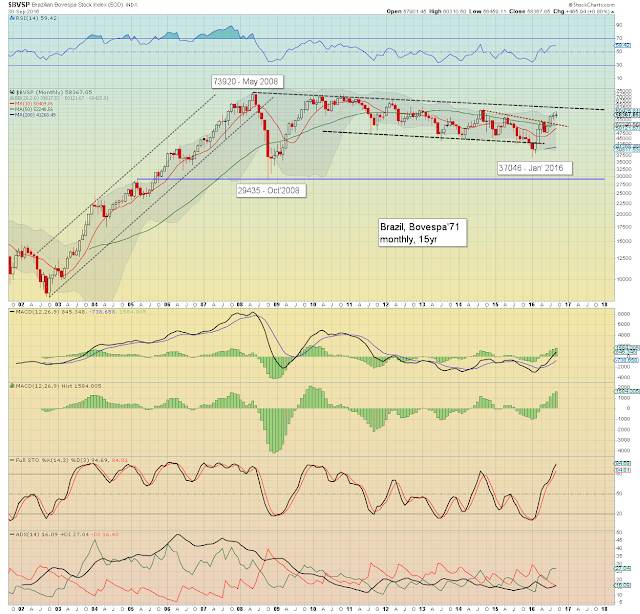 The Brazilian market climbed for a fourth consecutive month, settling +0.8% @ 58367. There is massive resistance in the 60-62k zone. Any price action >63k will offer a straight run to challenge the May 2008 high of 73920. Further upside in oil/gas prices would really help inspire the Bovespa higher into next year. 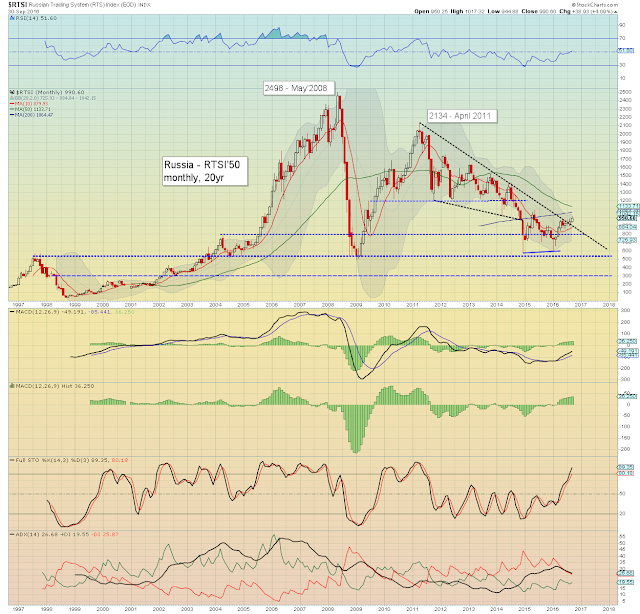 With oil/gas prices on the rise, the Russian market had a strong month, settling +4.1% @ 990. There was a notable intra month high of 1017, the best level since May 2015. With declining trend from 2011 already broken, the door is wide open to the 1200 threshold, which seems a given by next spring. President Putin should be very pleased indeed with what is a clear multi-year floor, and a market that should be able to climb across the next 6-9 months. 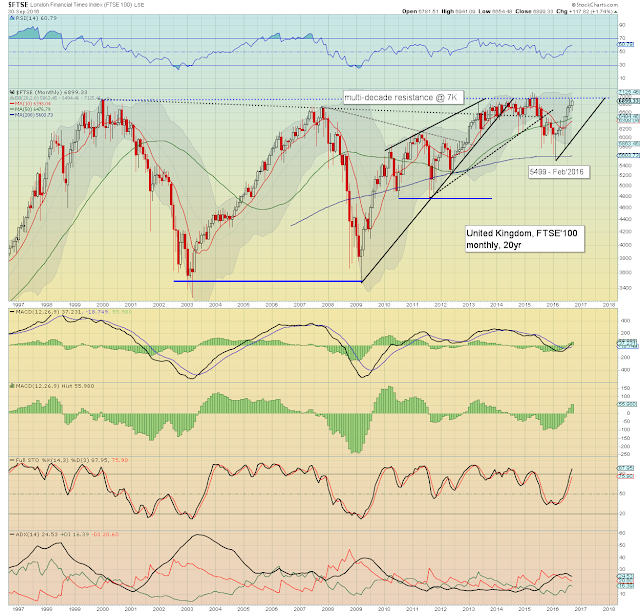 The UK market climbed for a fourth consecutive month, settling +1.7% @ 6899. The 7K threshold remains massively powerful multi-decade resistance. 2015 saw repeated failures to break/hold the 7000s, but it would seem there is a high probability the FTSE will manage an Oct' or Nov' settlement >7K. If that is the case, next target would be 8K, with 9k viable by summer 2017.

For those that believe the next bear market will be on the order of 40/50%. If you extrapolate from 7k - which will act as support, the current rally (from 2009) should continue at least to 10/11k. That degree of increase would surely be achieved no earlier than autumn 2017.. or far more viable... spring 2018.

It remains ironic that the UK market is poised for a massive breakout, despite the BREXIT. It is notable though that the BoE remain very twitchy about economic prospects, having spun up the money printers, and cutting int' rates. Indeed, a further rate cut (if very minor) is already the stated intention of the BoE.
-- 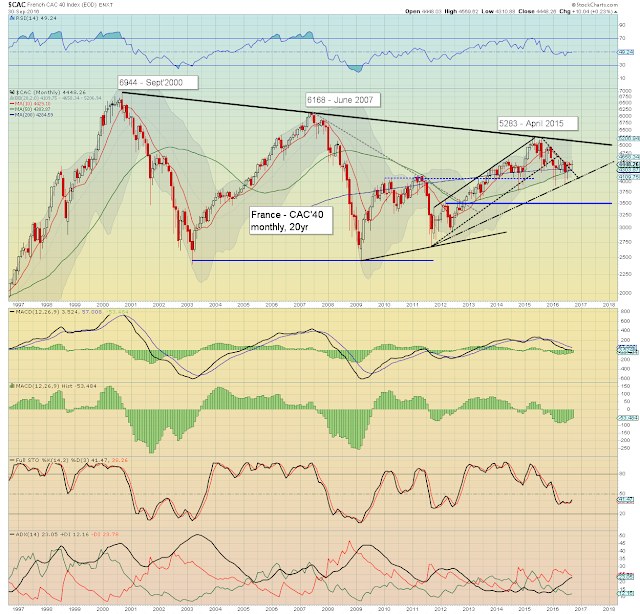 The French market had a pretty subdued month, settling +0.2% @ 4448. It is notable that the CAC remains outside of the downward trend that began in April 2015. A bullish MACD cross looks probable before year end. First upside target is the 5000/5100s, which is where declining trend will be at year end. Any price action in the 5300s would offer a challenge of the Sept'2000 historic high of 6944 - which is 56% above current levels. 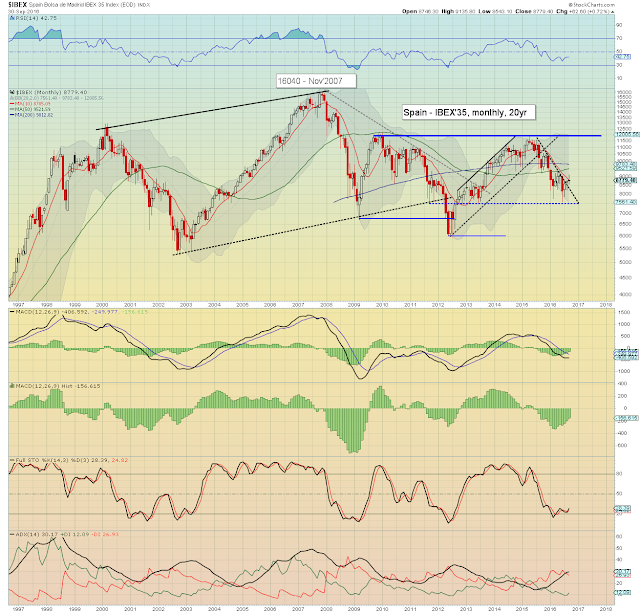 The Spanish market had a month of churn, settling +0.7% @ 8779. First big target is the 10K threshold. A bullish MACD cross seems probable before year end. A monthly close >12K (37% above current levels) remains the ultimate target, as that has held as resistance since late 2009. 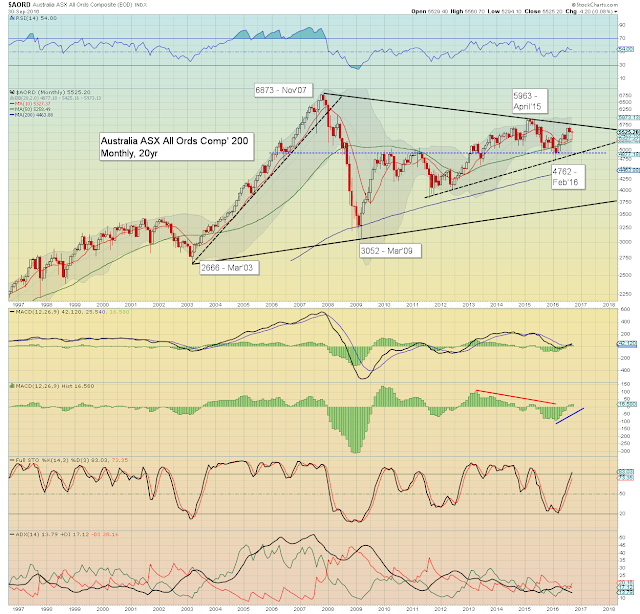 The Australian market recovered into end month, settling lower by just -0.1% at 5525. Underlying price momentum remains marginally positive. First big target is declining trend, which will be in the 5700s for the remainder of the year. Any price action >5800 would be very bullish, and offer 6000 in early 2017. The Nov' 2007 high of 6873 (24% above current levels) will be a real challenge to reach next year, and would require a broad based rally in commodities. Things only turn bearish on a break <5K, and that looks rather unlikely indeed.
--

There is distinct weakness in China/Japan, whilst the USA and a number of European markets are still broadly clawing upward.

Cyclically, ALL world markets are seeing price momentum swinging back upward. There will be increased opportunity of upside into end year/early 2017.

The commodity centric markets (such as Russia, Brazil, Australia) will be particularly liable to break powerfully higher into 2017.

Market is expecting net job gains of 168k, with a headline jobless rate of 4.8%. That doesn't seem overly optimistic, and I'd expect to see a number >200k. That should further solidify the notion that the Fed will raise rates in December.

*There is a sprinkling of fed officials across the week, notably vice-chair Fischer on Friday.
--


If you value these posts, you can support me via a monthly subscription, which will give you access to my continuing intraday posts. If you think I'm worth around $1 per trading day... then please subscribe!

--
*The next post on this page will appear Mon' 7pm
Posted by Trading Sunset at 17:00:00
Email ThisBlogThis!Share to TwitterShare to FacebookShare to Pinterest

Q3 ends on a positive note 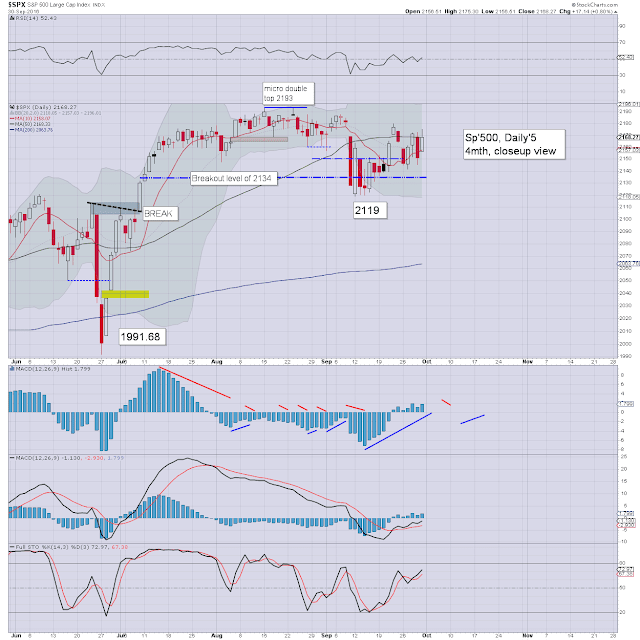 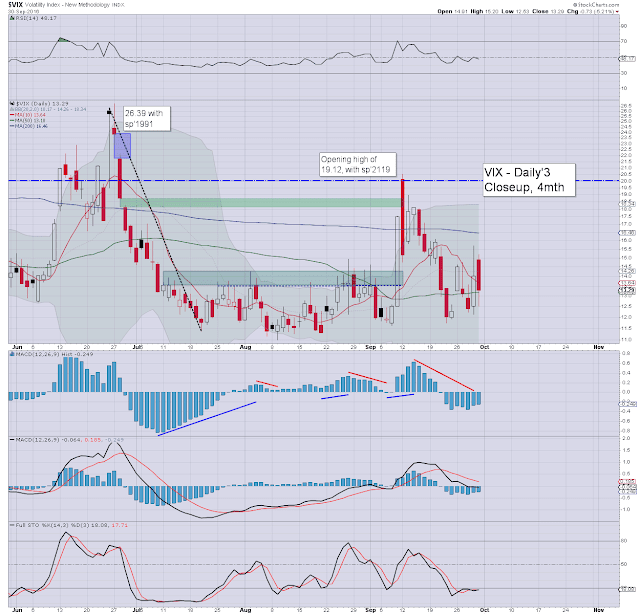 Cyclically, the market was due some choppy upside today, but even I was surprised to see the sp'2170s.

Ohh how quickly the 'spooky news' about DB was shrugged off, and it was quite amusing to see many chasing Deutsche Bank (DB) back into the $13s. Cyclically, DB looks set for the $15/16s in the near term, but what kind of maniac wants to get involved in that trade?

As for volatility, with equities higher, the VIX was naturally in cooling mode, trading in the 12s for much for the day.


This is an intraday update from Riley, but the issues raised about next week are important.


Goodnight from a somewhat chilly London
--