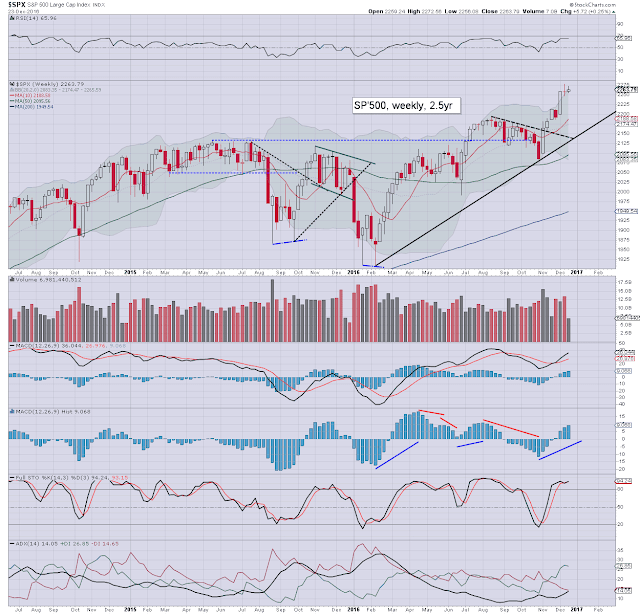 A net weekly gain of 5pts (0.2%), settling @ 2263. Underlying MACD (blue bar histogram) cycle continues to tick upward, and is now on the slightly high side. Its notable that we're scraping along the upper weekly bollinger. The key 10MA will be in the 2200s next week, and indeed, price action <2200 looks unlikely any time soon. 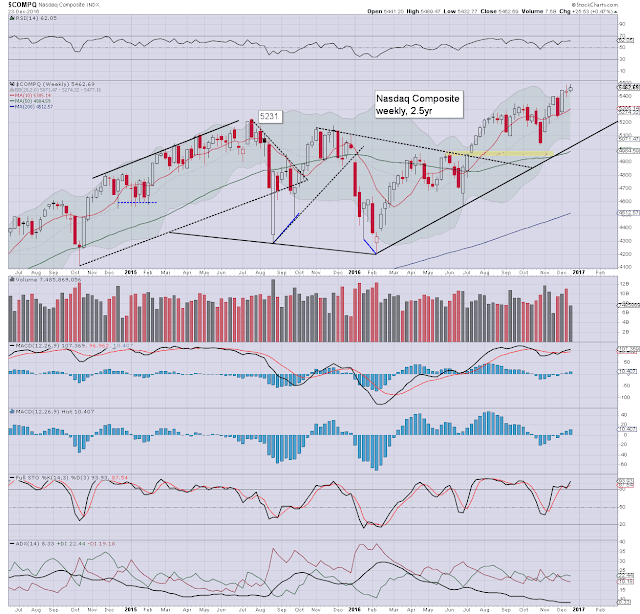 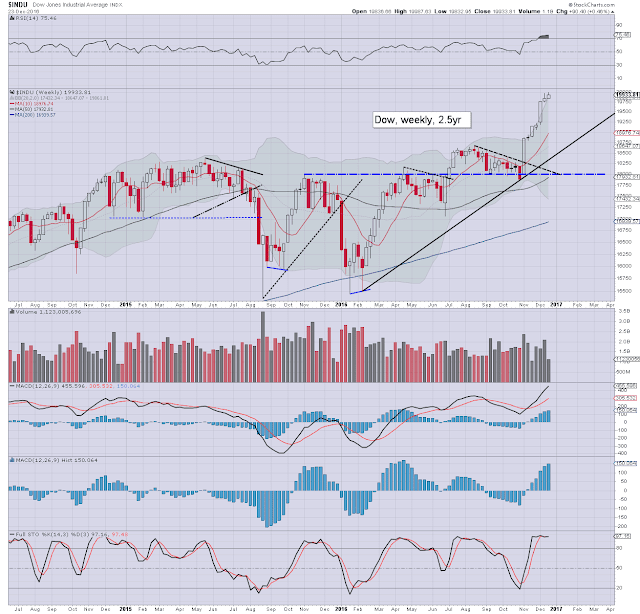 A new historic high of 19987, settling higher for a seventh consecutive week, the best run since Dec'2015. Underlying MACD is on the very high side, with an RSI of 75 - the highest since May 2013. Regardless of any near term cooling, the 20K threshold looks a given.

The mainstream are (understandably) obsessing about 20000. Its interesting that I'm starting to hear talk of 24-26k by end 2017. Things only turn bearish with price action <19k this spring. Even then, core support of 18k looks concrete. 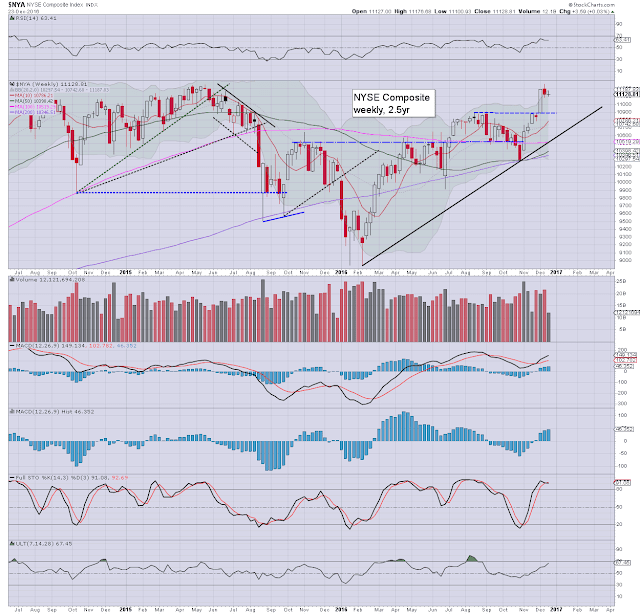 The master index closed broadly flat, settling +3pts @ 11128. With the 2015 high of 11252 broken above last week, next big upside target is the 12k threshold. That will clearly take at least another 2-3 months. 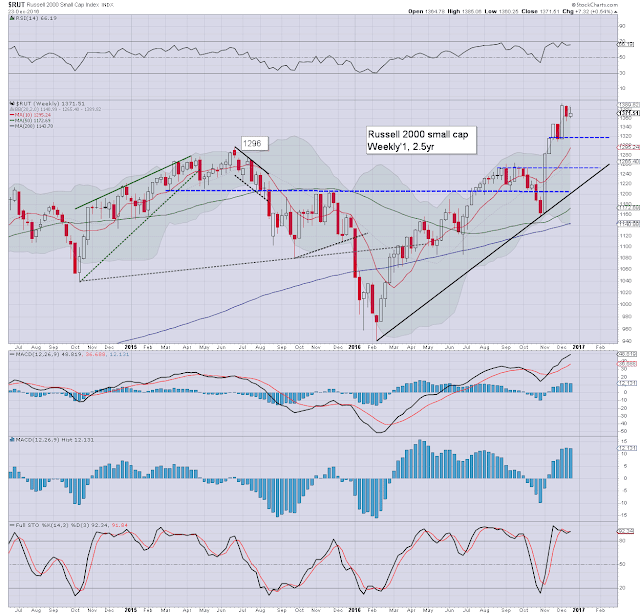 The second market leader - R2K, settled +0.5% @ 1371. Underlying MACD cycle is on the very high side, and is starting to tick lower. Clearly though, even if the market consistantly cooled, it would take at least 6-8 weeks just to see price momentum reach neutral. On balance, R2K in the 1500s is a valid target for spring 2017. 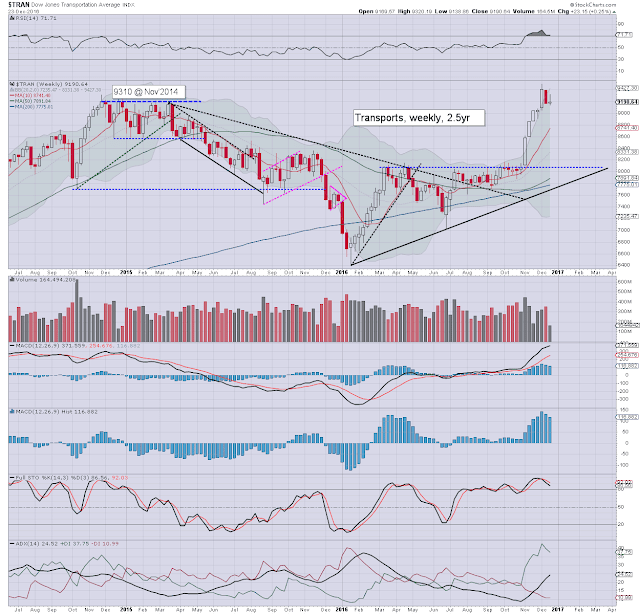 The 'old leader' - Transports, settled +0.2% @ 9190. Its notable that the key 10MA will soon be in the 9000s, which is now first soft support. Like the broader market, the tranny is short-term over-stretched, but its hard to imagine the Trans' not hitting 10k in the spring.
--

Despite a naturally subdued pre-Christmas trading week, the US equity market still managed to achieve another pair of historic highs in the Dow and Nasdaq comp'.

All US indexes are trading close to historic highs.

There is downside buffer for most indexes of around 5%, before the equity bears even test mid term rising trend/support.

Equity bears have nothing to tout unless they can break the market back under the monthly 10MA - which in Jan' will be around sp'2170/80.

It will be a short 4 day trading week (as it will be next week too!), and there isn't much scheduled.

As Friday is the last trading day of 2016, expect higher vol' and more dynamic price action, especially in the late afternoon.
--

If you value these posts here, you can support me via a monthly subscription, which will also give you access to my continued intraday postings at permabeardoomster.com.

If you think I'm worth around $1 per trading day... subscribe. Or you could buy two shares of Disney by the end of 2017.

In any case....  Merry Christmas from London
Posted by Trading Sunset at 17:00:00
Email ThisBlogThis!Share to TwitterShare to FacebookShare to Pinterest 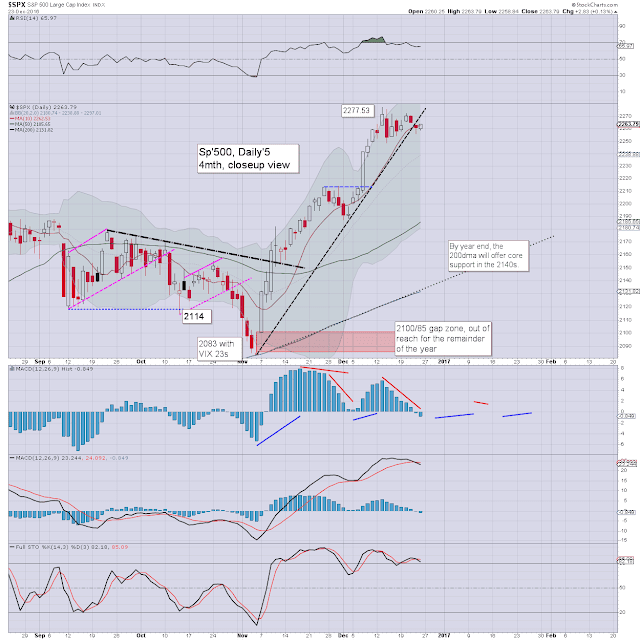 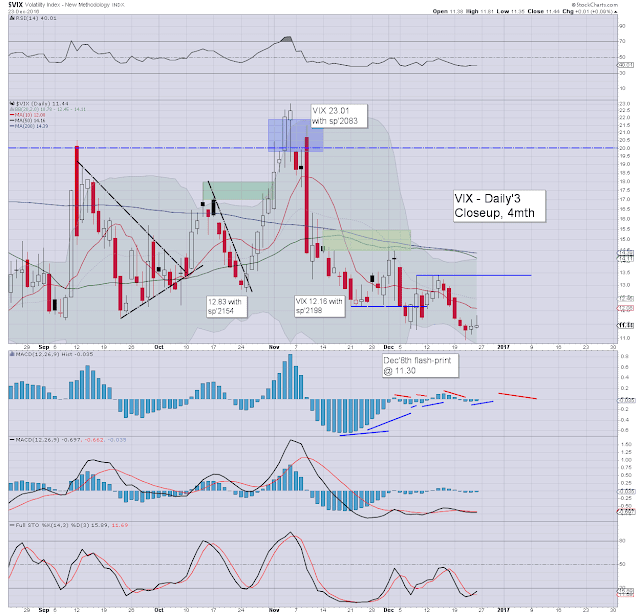 It was naturally an exceptionally subdued day in equity land, ahead of the three day Christmas break.

Its notable that the equity underlying MACD (blue bar histogram) cycle continues to tick lower, and that increased downward pressure should present itself in lower prices, when the market re-opens next Tuesday.

VIX remains broadly subdued. At best.. if sp'2240/30s, that might equate to VIX 13s. Even the 14s look a stretch before end year. The key 20 threshold looks out of range for at least a month.

*the weekend post will appear Sat' 12pm EST, and will fully detail the US weekly indexes
Posted by Trading Sunset at 00:00:00
Email ThisBlogThis!Share to TwitterShare to FacebookShare to Pinterest
Newer Posts Older Posts Home
Subscribe to: Posts (Atom)