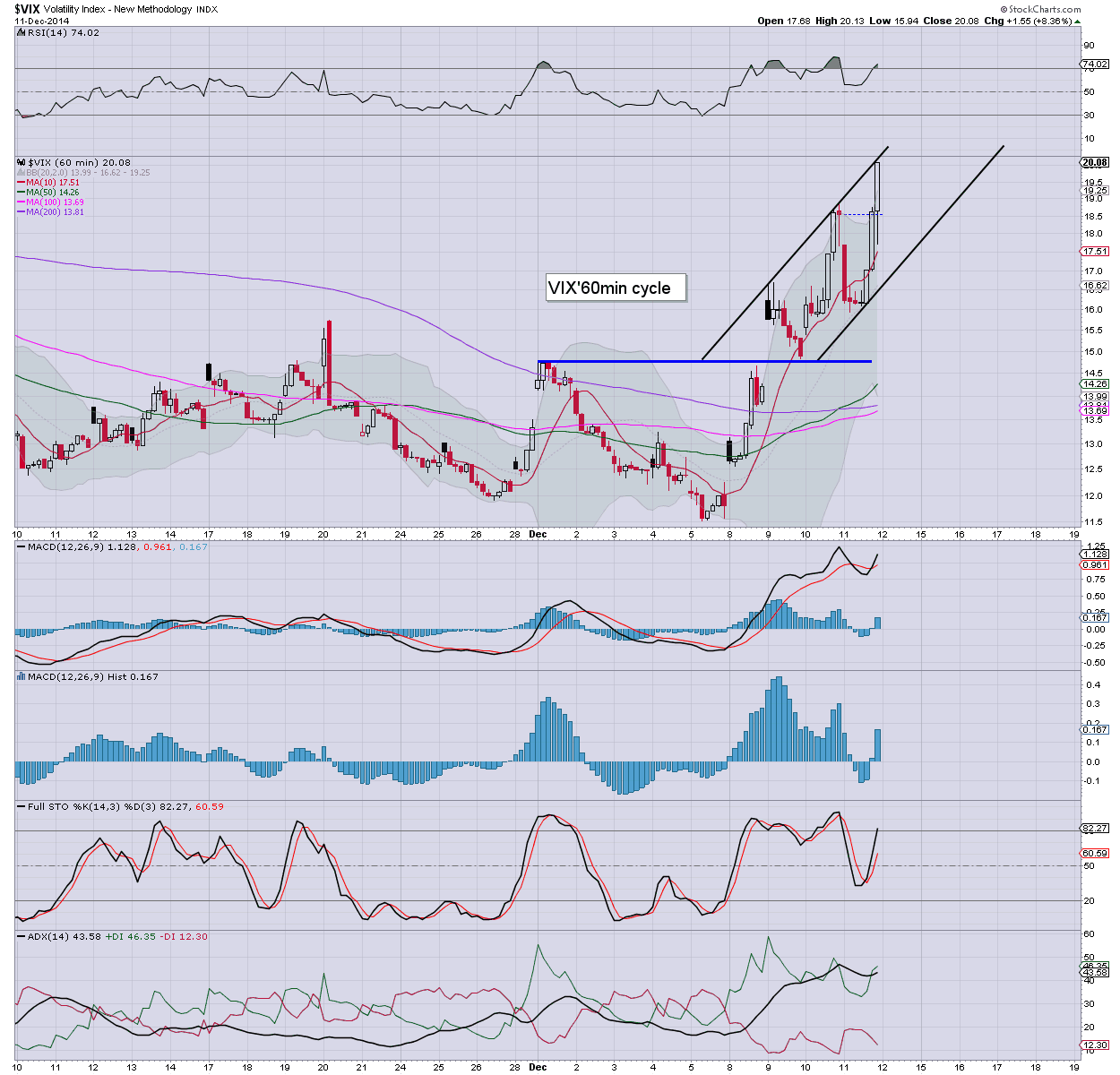 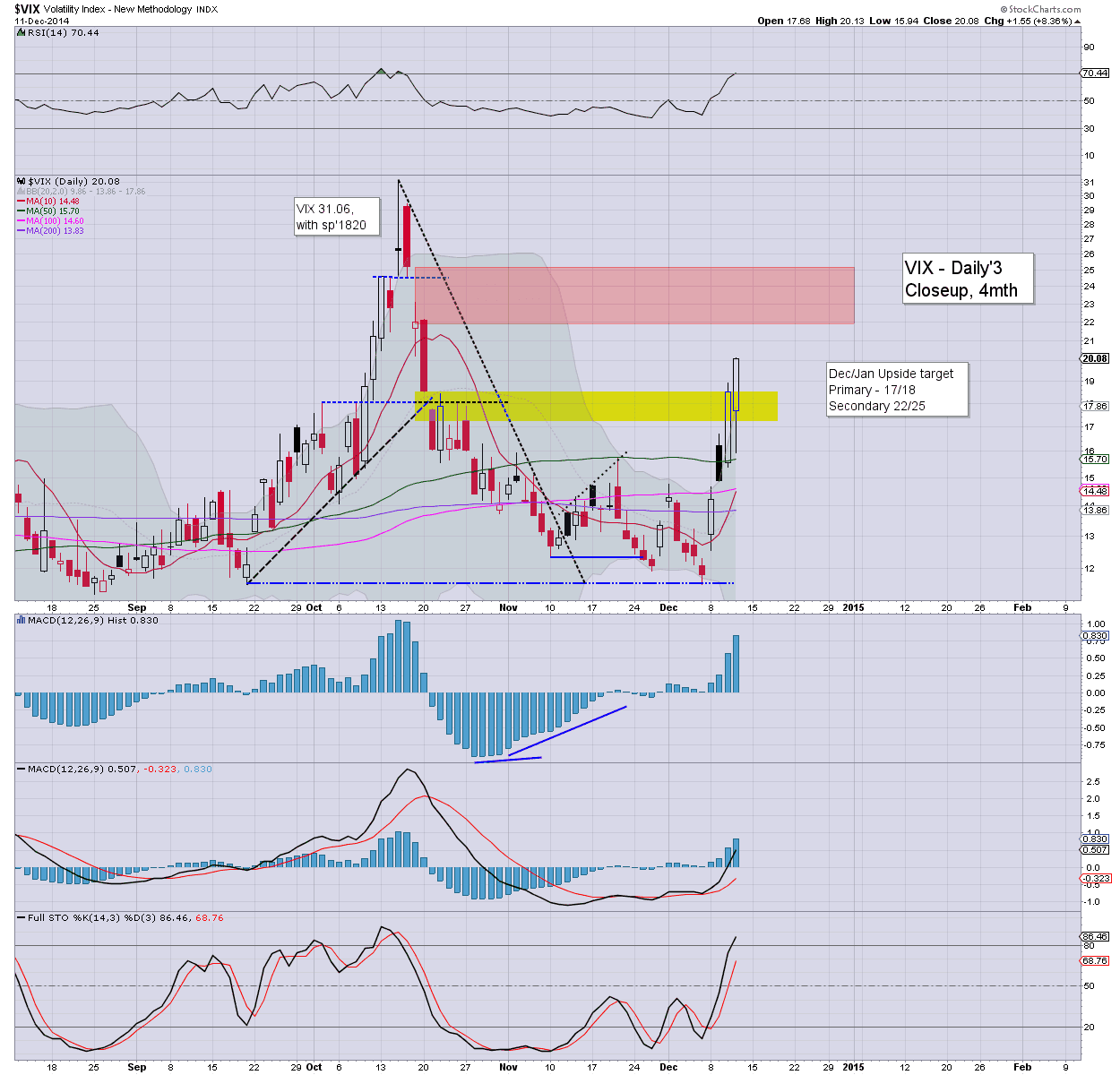 *a notable fourth consecutive daily net gain for the VIX
--

Suffice to say.. a pretty dynamic day for the VIX, knocked lower... but with a very strong latter day rebound.

With a daily close above the key 20 threshold, secondary target zone of 22/25 is now likely, before the broader equity market begins a new up wave into early 2015.

On any 'fair' outlook though, VIX looks set to max out next week.. and then cool into the new year.
--

US equities closed with moderate gains, and well below the earlier highs.. sp +9pts @ 2035 (intra high 2055). The two leaders - Trans/R2K, settled higher by 0.8% and 0.4% respectively. Near term outlook is offering another wave lower, a primary target of sp'2000 by next Wednesday. 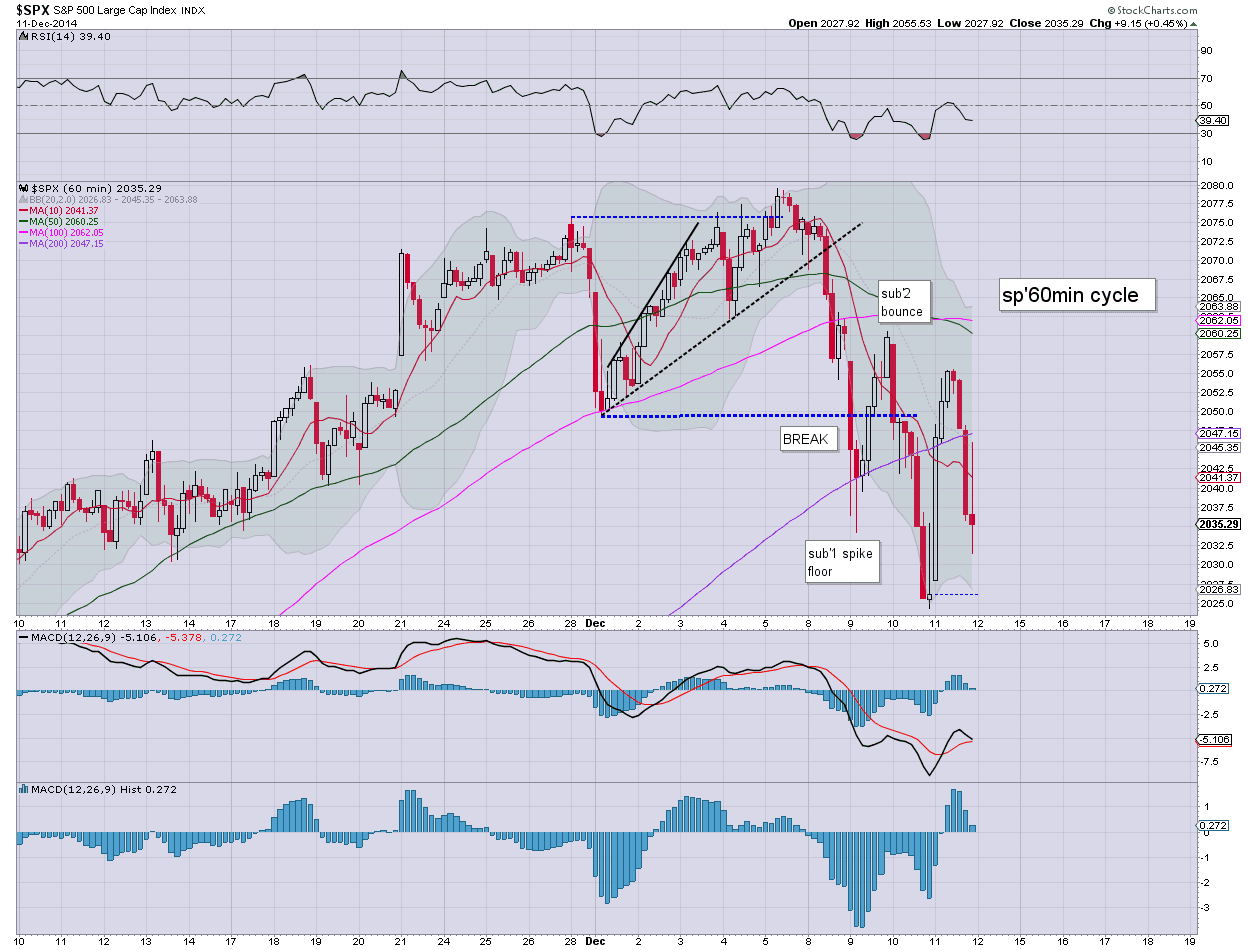 A very entertaining closing hour, with two thirds of the morning gains evaporating.

Perhaps even more telling, despite the net daily gains, VIX has already broke back into the 20s.

--
With the dynamic moves today.. a full set of updates to wrap up the day.. across the evening...
Posted by Trading Sunset at 21:02:00
Email ThisBlogThis!Share to TwitterShare to FacebookShare to Pinterest

Regardless of the close, it has been a typically crazy day in market land. Despite notable major declines in some other world markets, the US market still managed another strong bounce. Outlook remains for sp'2000, before the FOMC... and then up into next year. 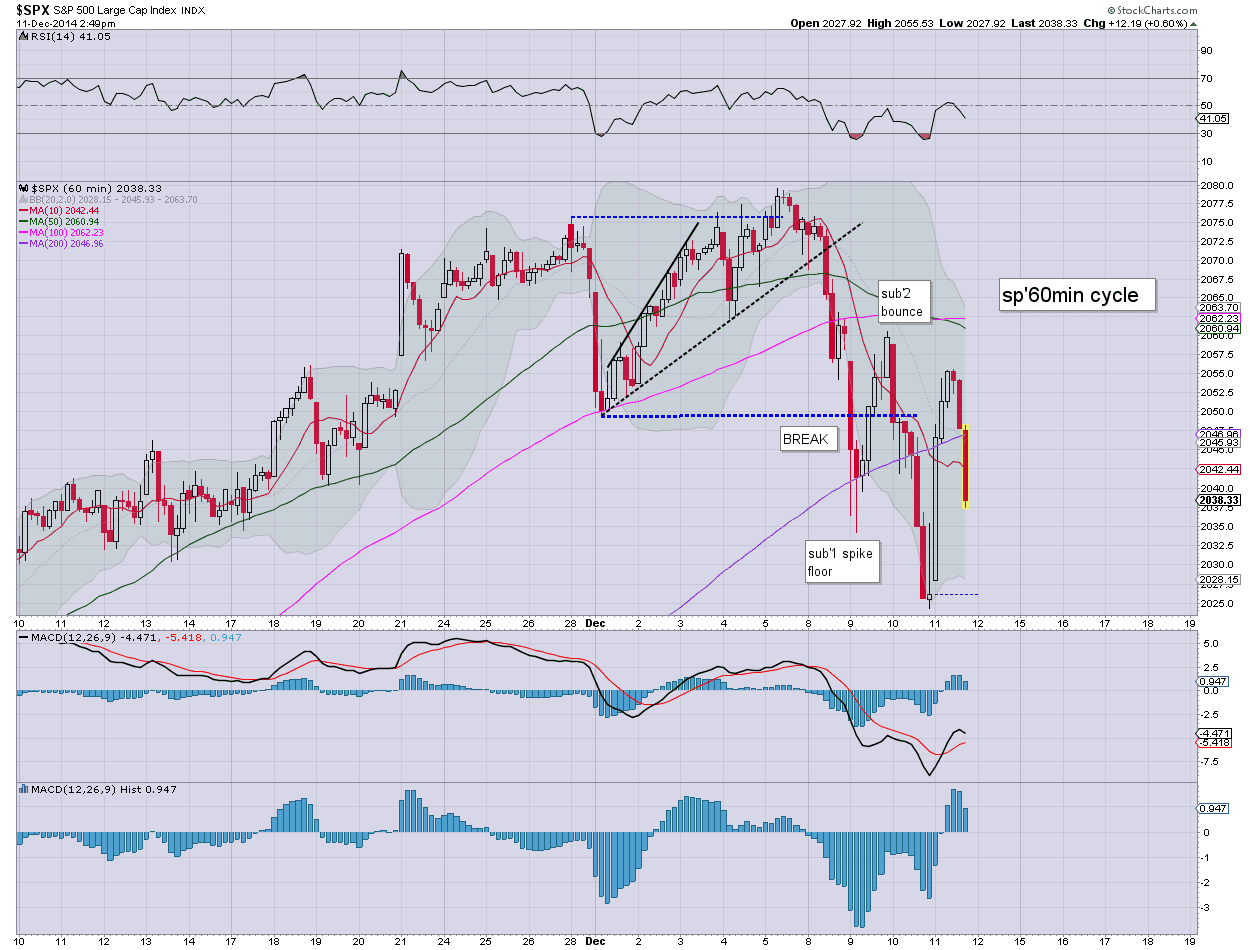 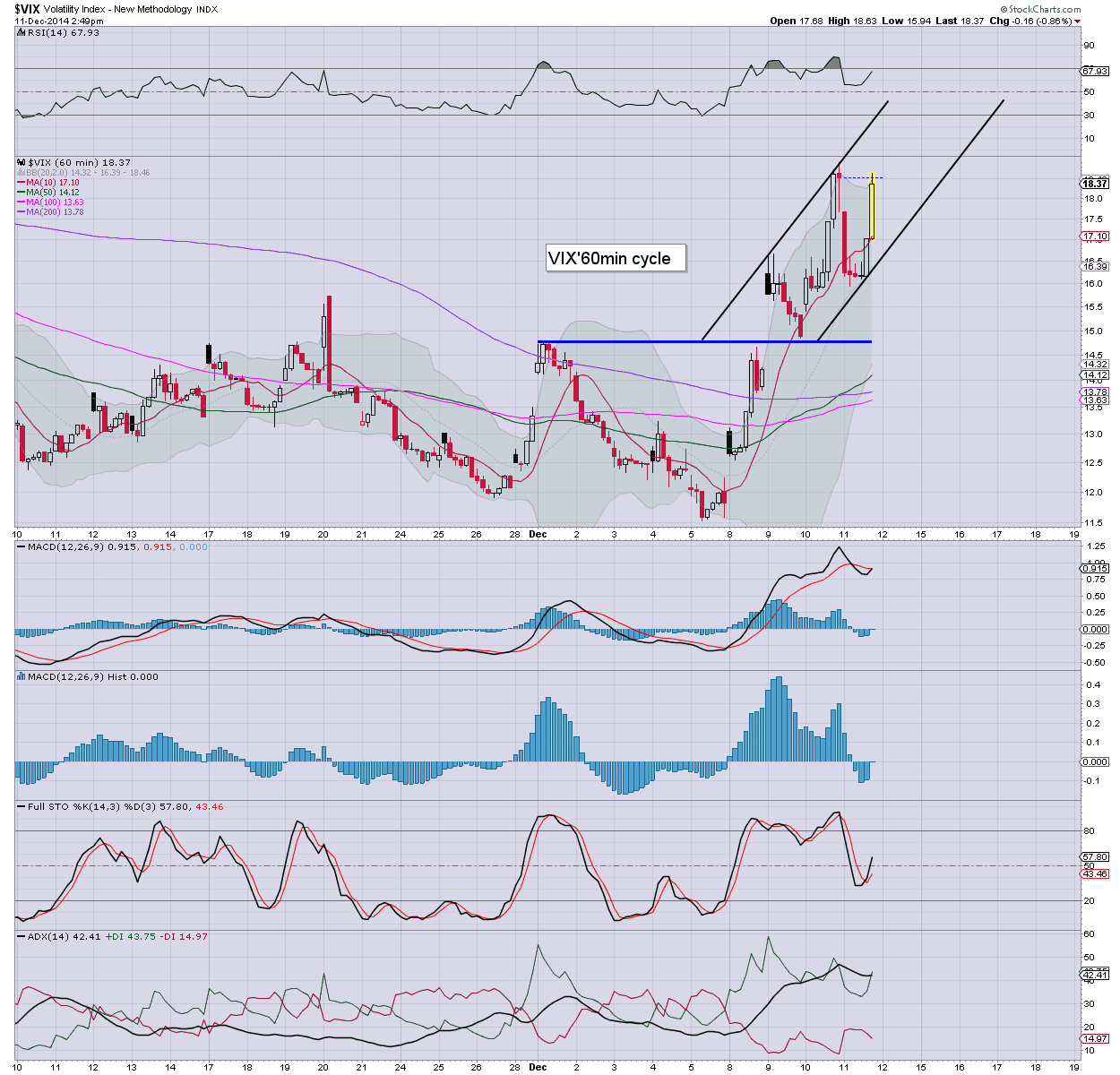 *equity bears should be aiming for a daily close, at least under the hourly 10MA... anything in the 2030s would be a bonus.. considering the earlier high of 2055.
-

Current price action is starting to get rather entertaining.. with a rather dramatic 2pm candle. The rats are starting to finally realise.. today (much like Tuesday).. was just another stupid bounce.
--

welcome to the $59s.....next soft support 57/55.
Posted by Trading Sunset at 19:51:00
Email ThisBlogThis!Share to TwitterShare to FacebookShare to Pinterest

The smaller 60/15min equity cycles are offering the first sign that we have a somewhat lower high of sp'2055. Without question though, all indexes remain significantly higher, and this is a rough day for those holding short from yesterday. VIX is clawing back some of the losses, -10% in the 16.60s. 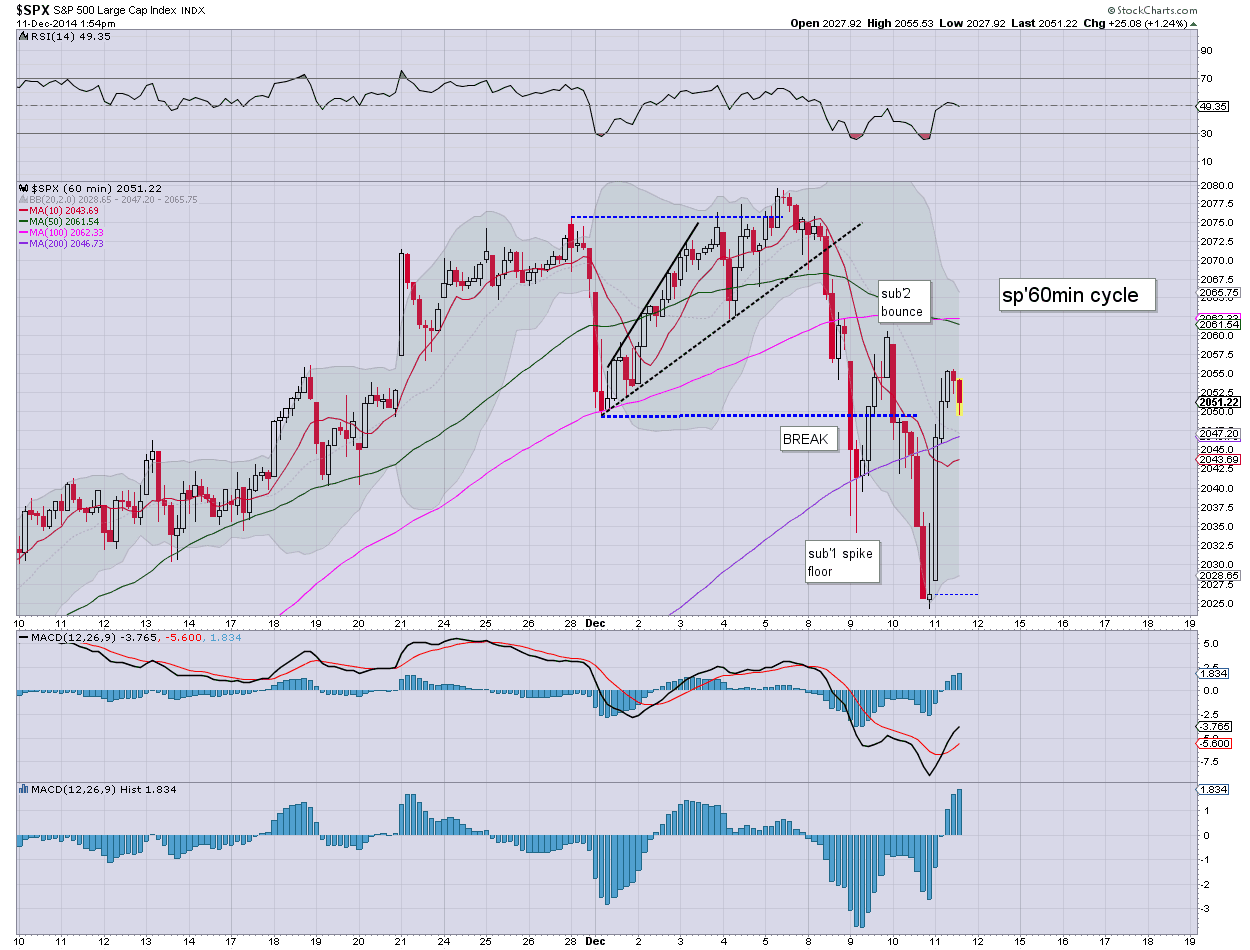 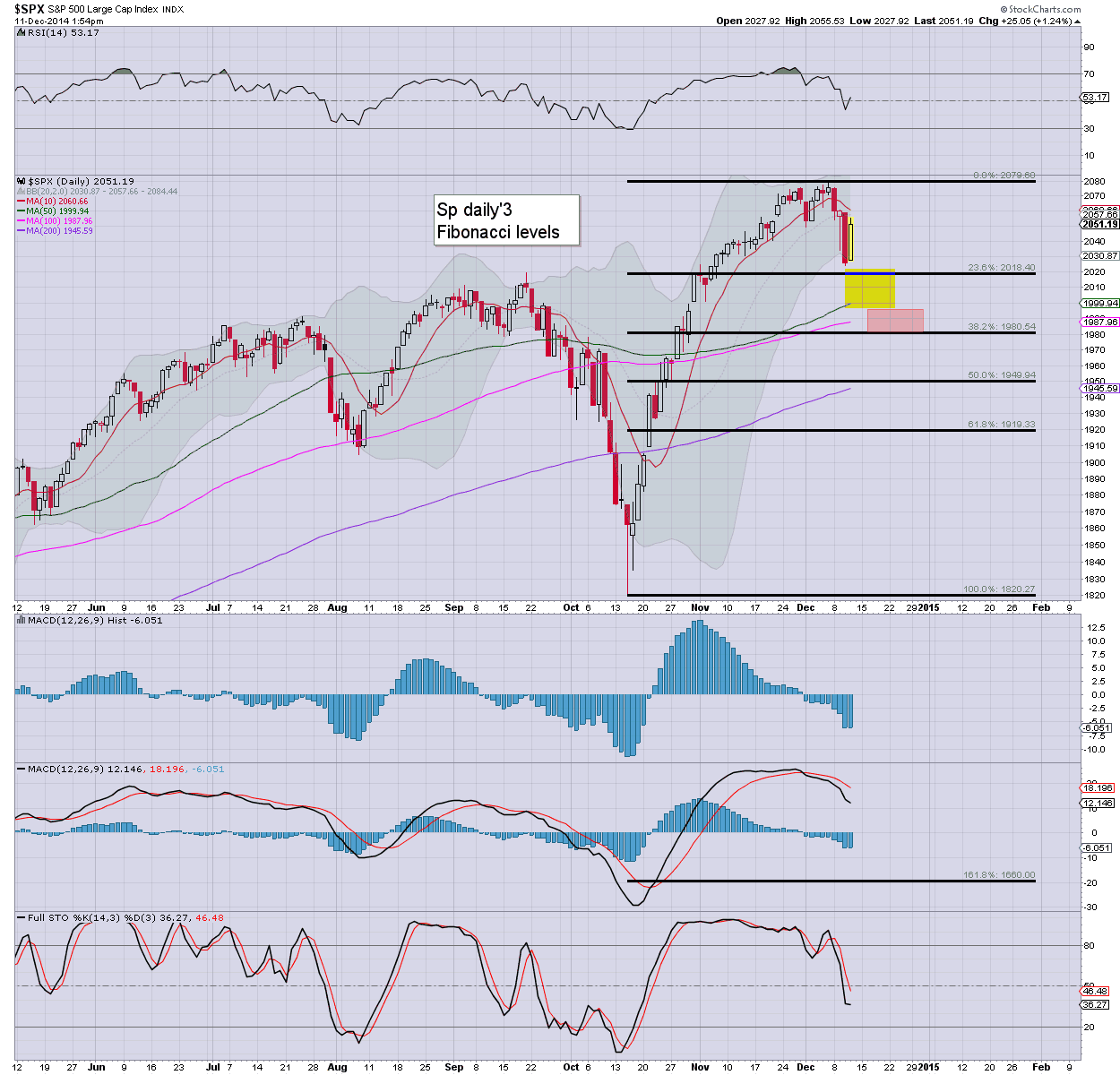 Overall, it remains pretty crazy, but so far at least.. it does count as a lower high of sp'2055.

Whether you want to call today's move a sub'4.. or whatever... I'll hold to primary target of sp'2000, but that is clearly out of range until next week.
-- 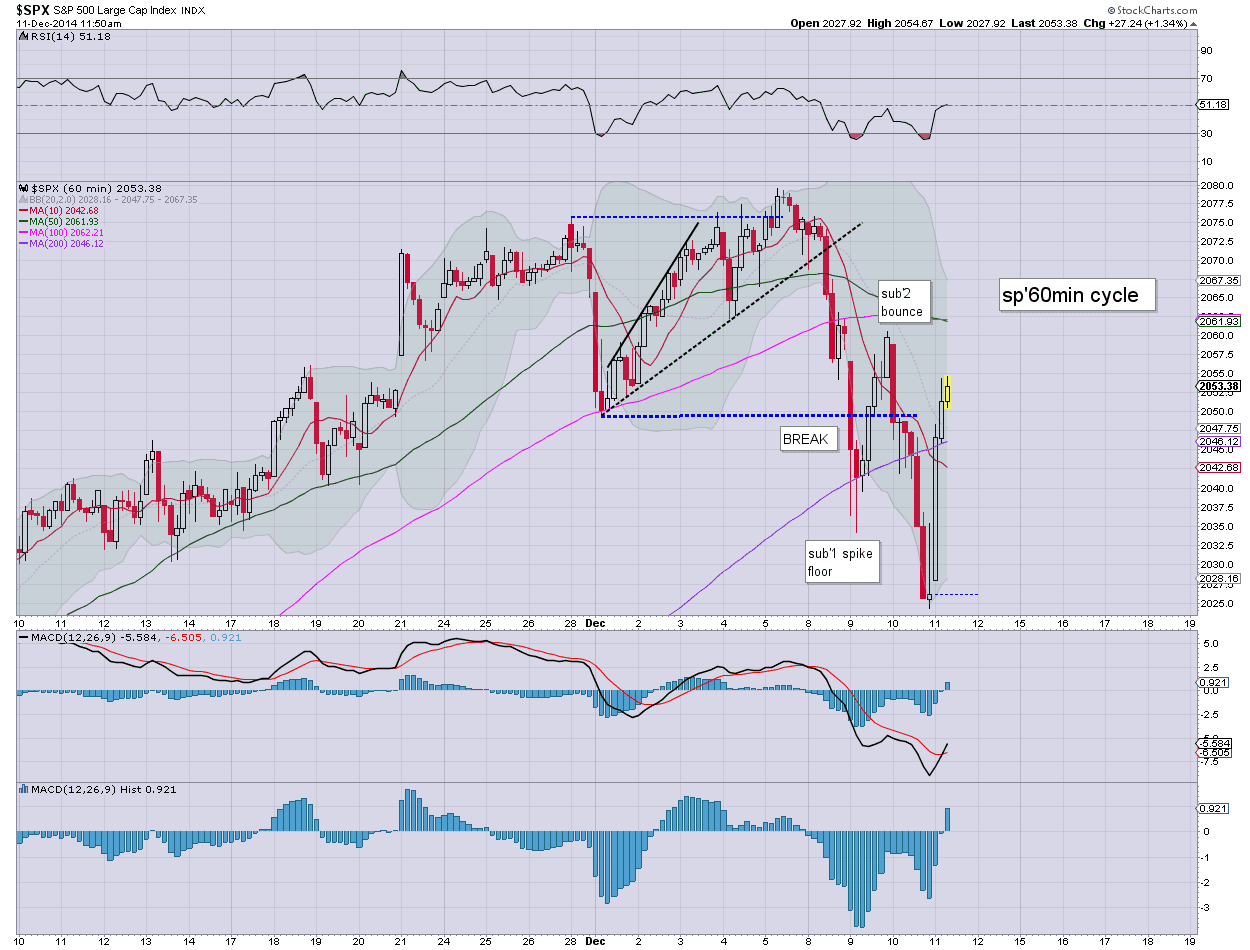 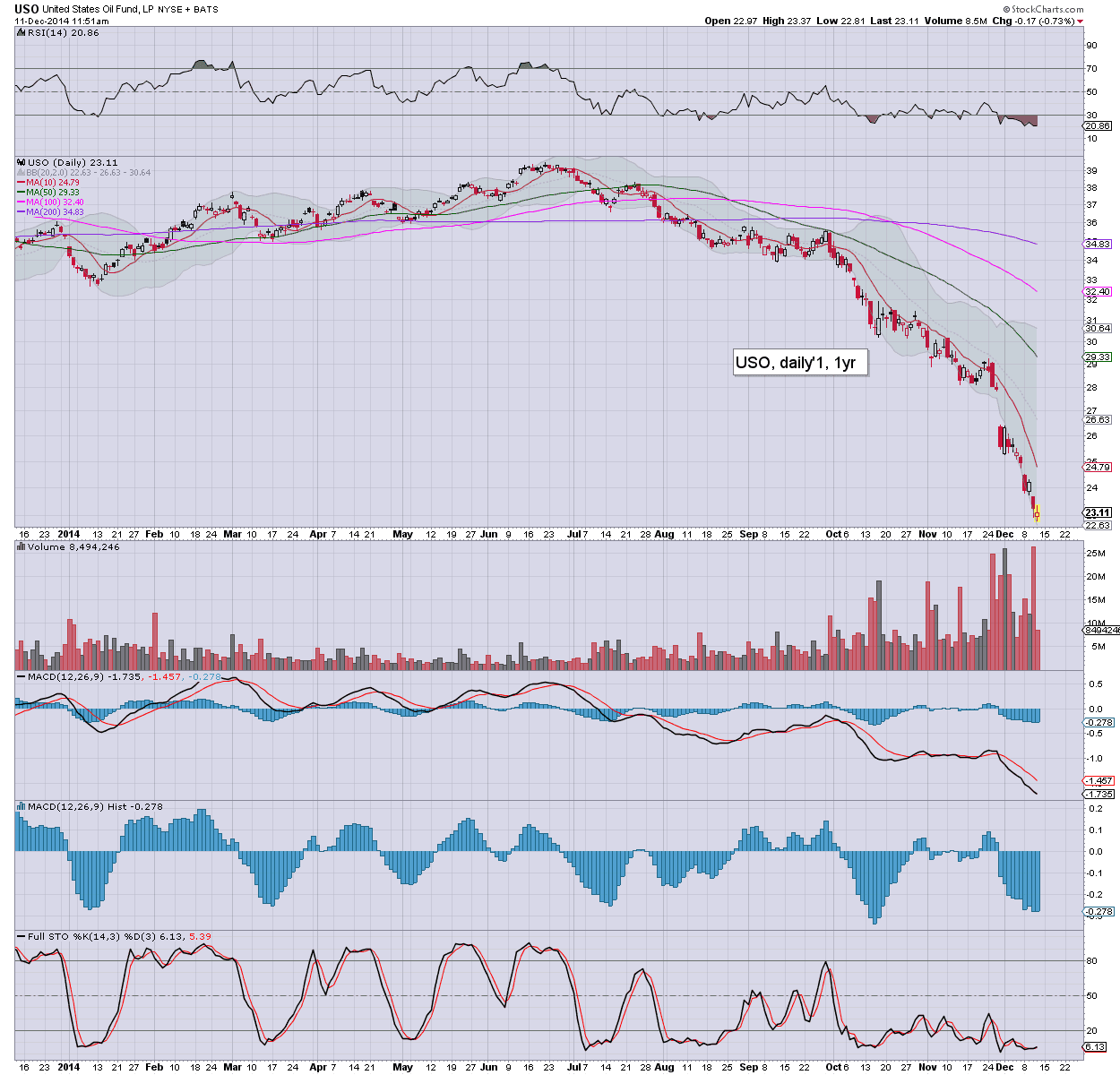 We have two marginally spiky-top candles on the sp'500, but still.. no clear sign of this latest up wave maxing out. A bounce this morning was certainly no surprise, but not of this magnitude.. or duration.

Regardless, primary downside target remains sp'2000.. but with this mornings gains, that is not viable until next week.
--

As for Oil... according to finviz, we hit a low of $60.09, but considering that OPEC will not likely announce any initial threat to reduce supplies.. at least until January... sub 60s still look due.


--
time for tea, back at 2pm
Posted by Trading Sunset at 16:55:00
Email ThisBlogThis!Share to TwitterShare to FacebookShare to Pinterest

11am update - over extended nonsense

US equity indexes are all significantly higher, with the sp'500 having so far hit a high of 2054... which even to the bull maniacs.. should make little sense. Metals remain weak, Gold -$5, whilst Oil has clawed back most of the opening declines, -0.3%. 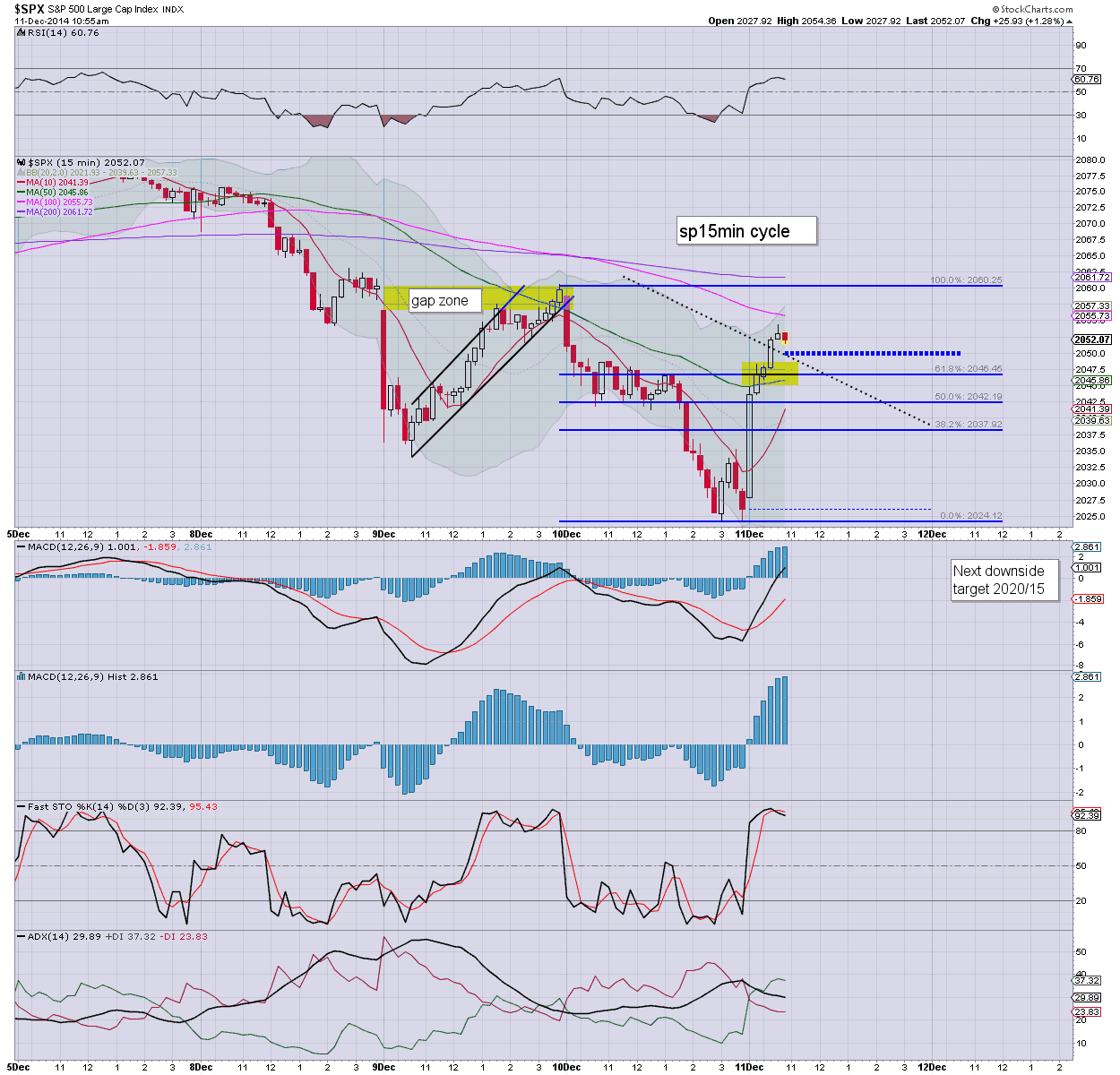 ...so.. what is the 'excuse' for this?  Frankly, this feels more crazy than the latter day Tuesday ramp.

Are the BoJ buying heavy this morning, is that it?
-- 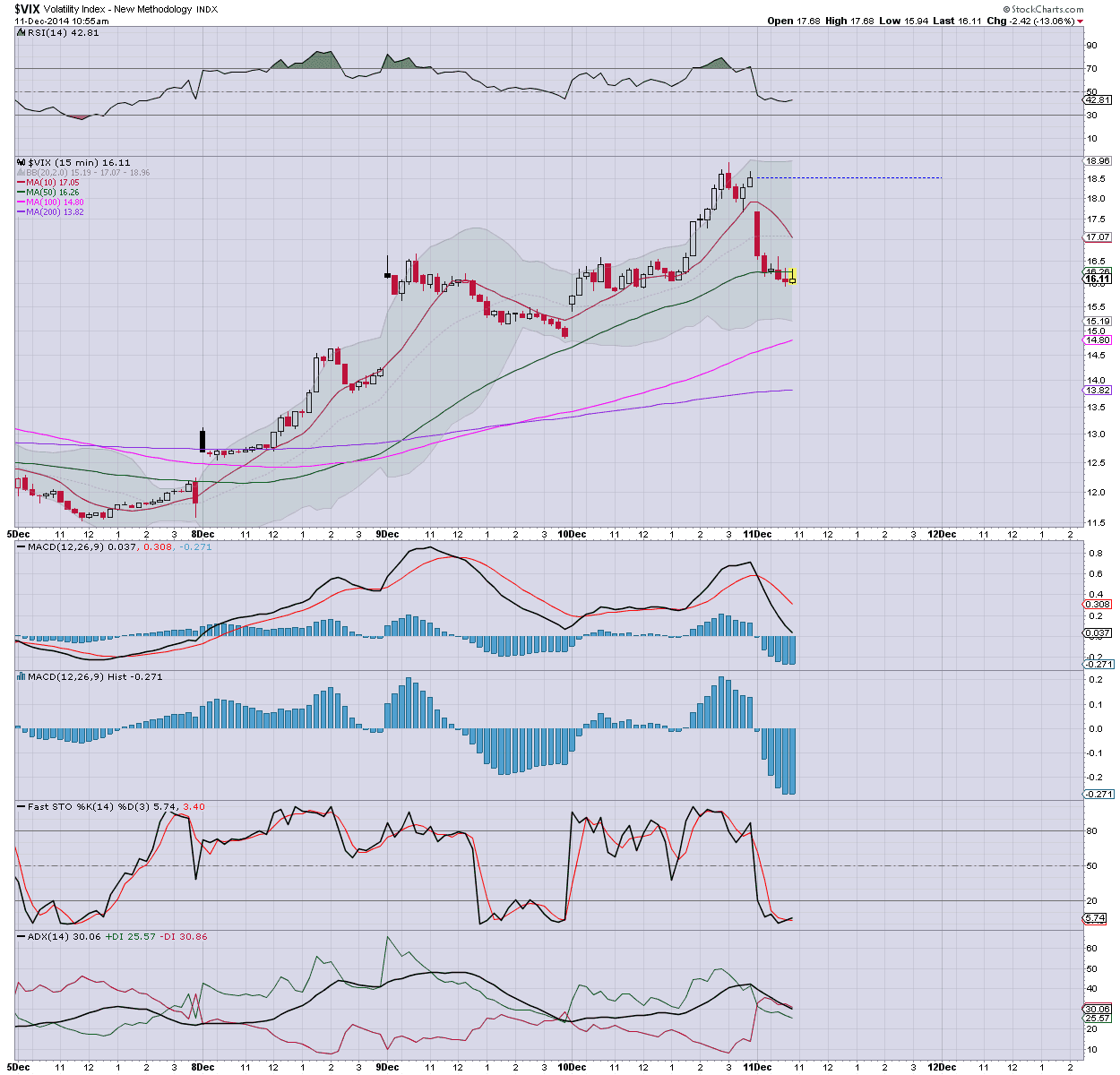 US equities open moderately higher, with the sp' retracing around half of yesterday's declines. A move back above sp'2050 looks highly unlikely. Broader downside target remains sp'2000.. whilst the FOMC clock is still ticking down. Oil and metals are both weak. 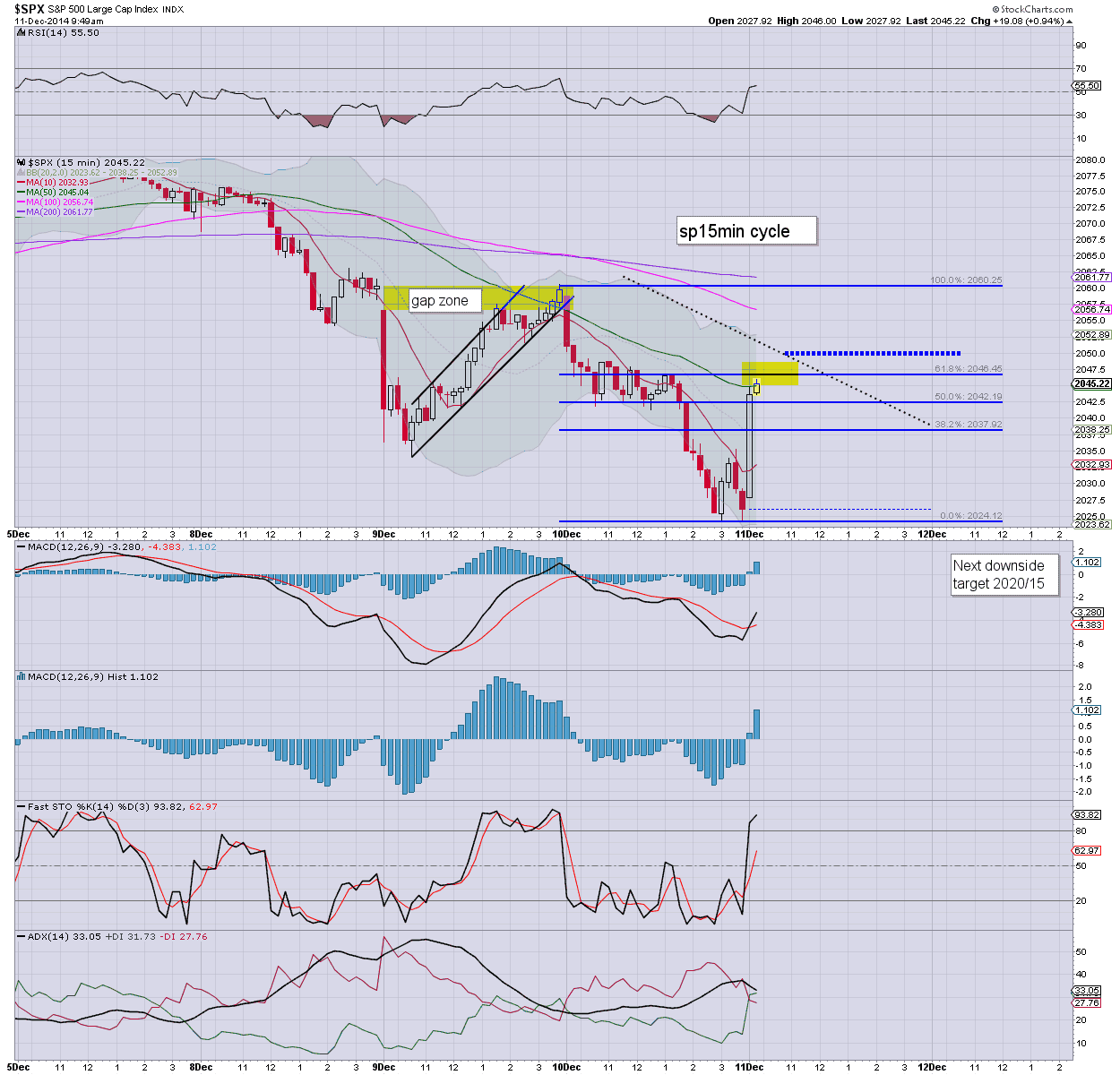 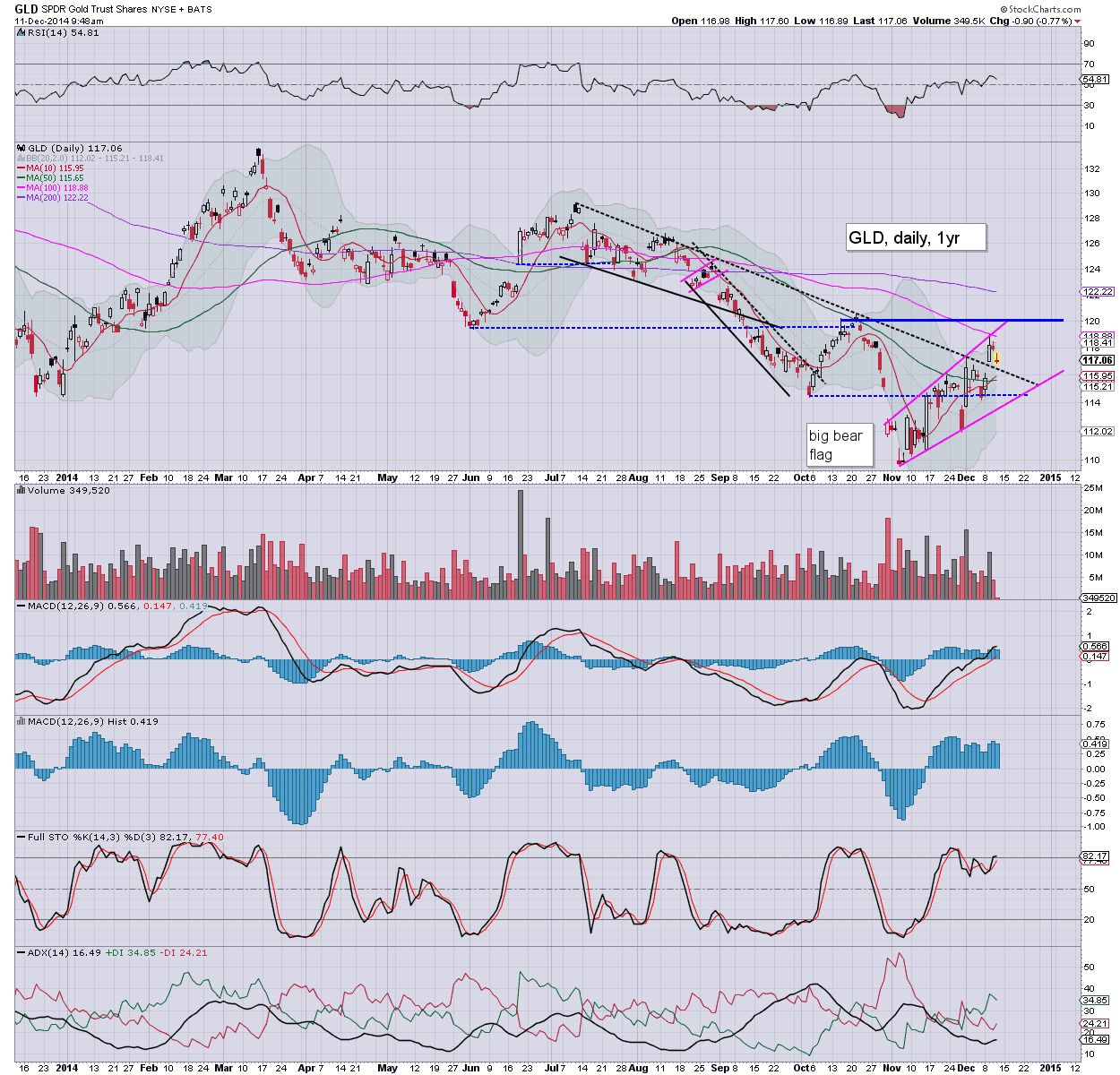 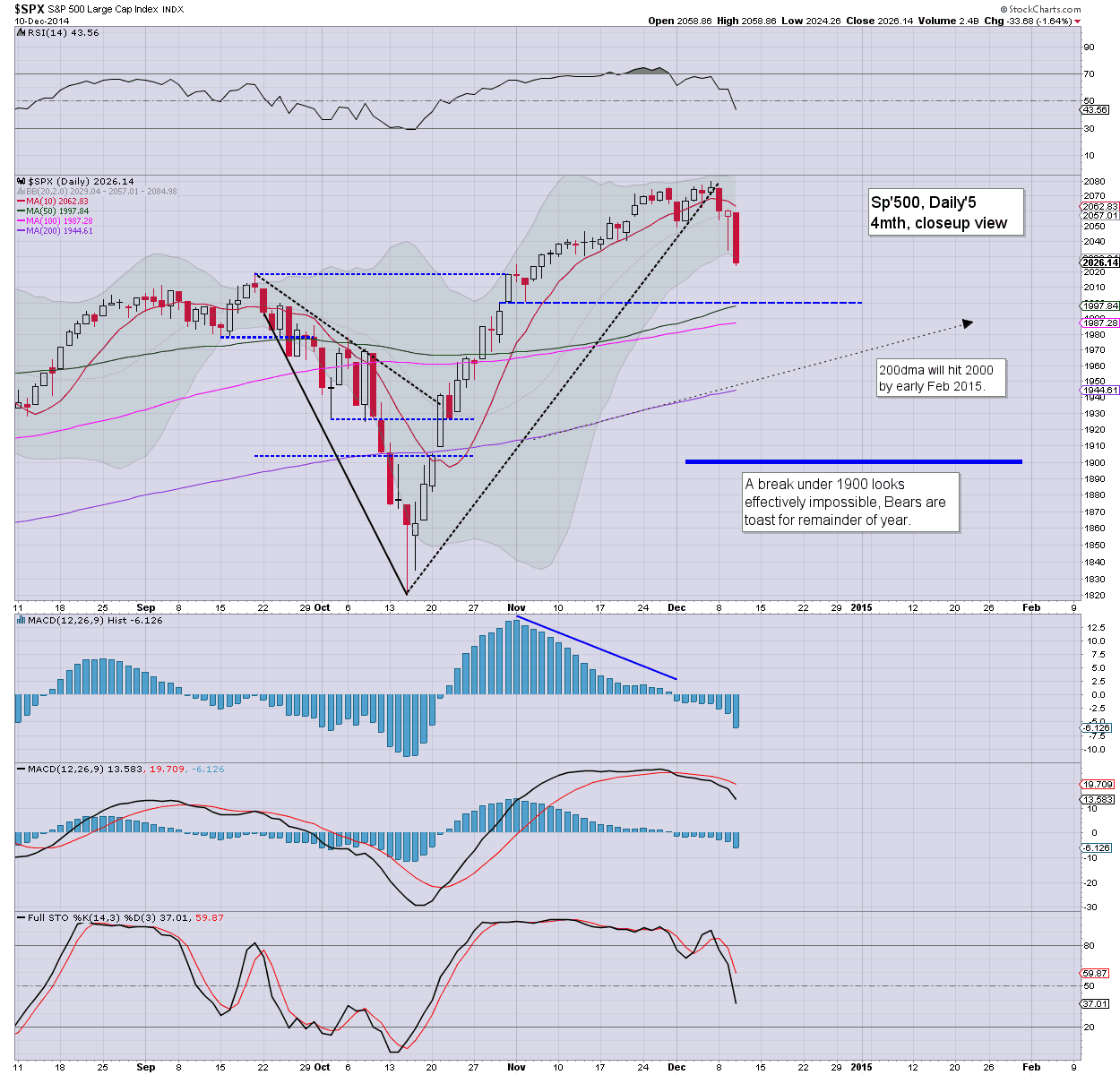 So, we're set to open a little higher. Call the opening gains a sub'4 (of 3) bounce... but I'd still guess we'll see a further wave lower later today

First key target remains the giant sp'2000 threshold. That still seems possible.. whether late today, tomorrow, or even next Mon/Tuesday.

What should be clear to most equity bears, this down wave is not likely to last beyond next Wednesday's FOMC. The clock IS ticking!
--

Oil has turned lower, -1.2%.. set to lose the $60 threshold this morning
Posted by Trading Sunset at 13:00:00
Email ThisBlogThis!Share to TwitterShare to FacebookShare to Pinterest

The renewed collapse in WTIC Oil prices today was certainly dramatic, with Oil set to lose the $60 threshold. Next year is offering oil prices consistently trading within the $70/40 zone, which is extremely bullish for the world economy. Similarly, Copper remains broadly weak. 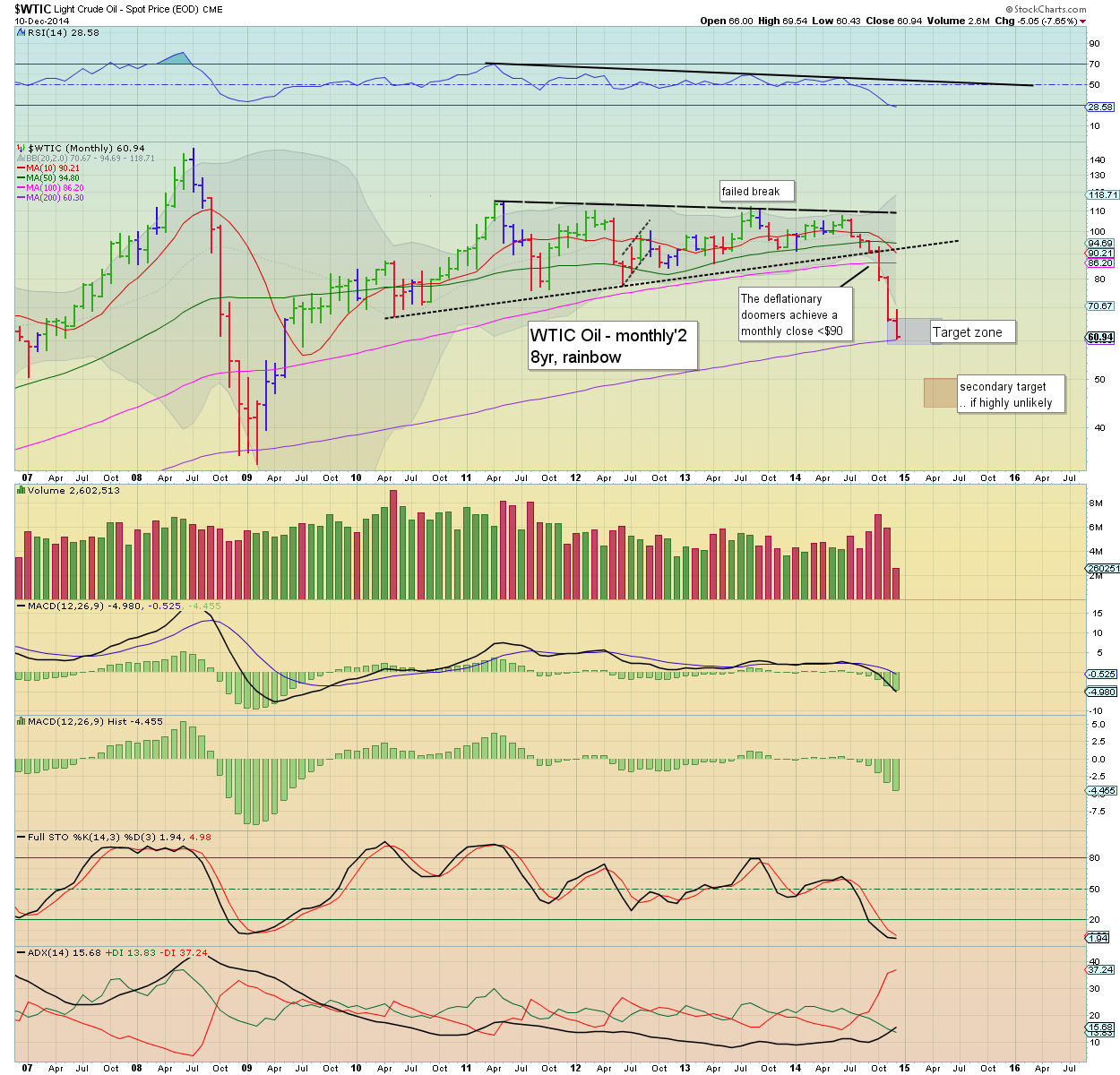 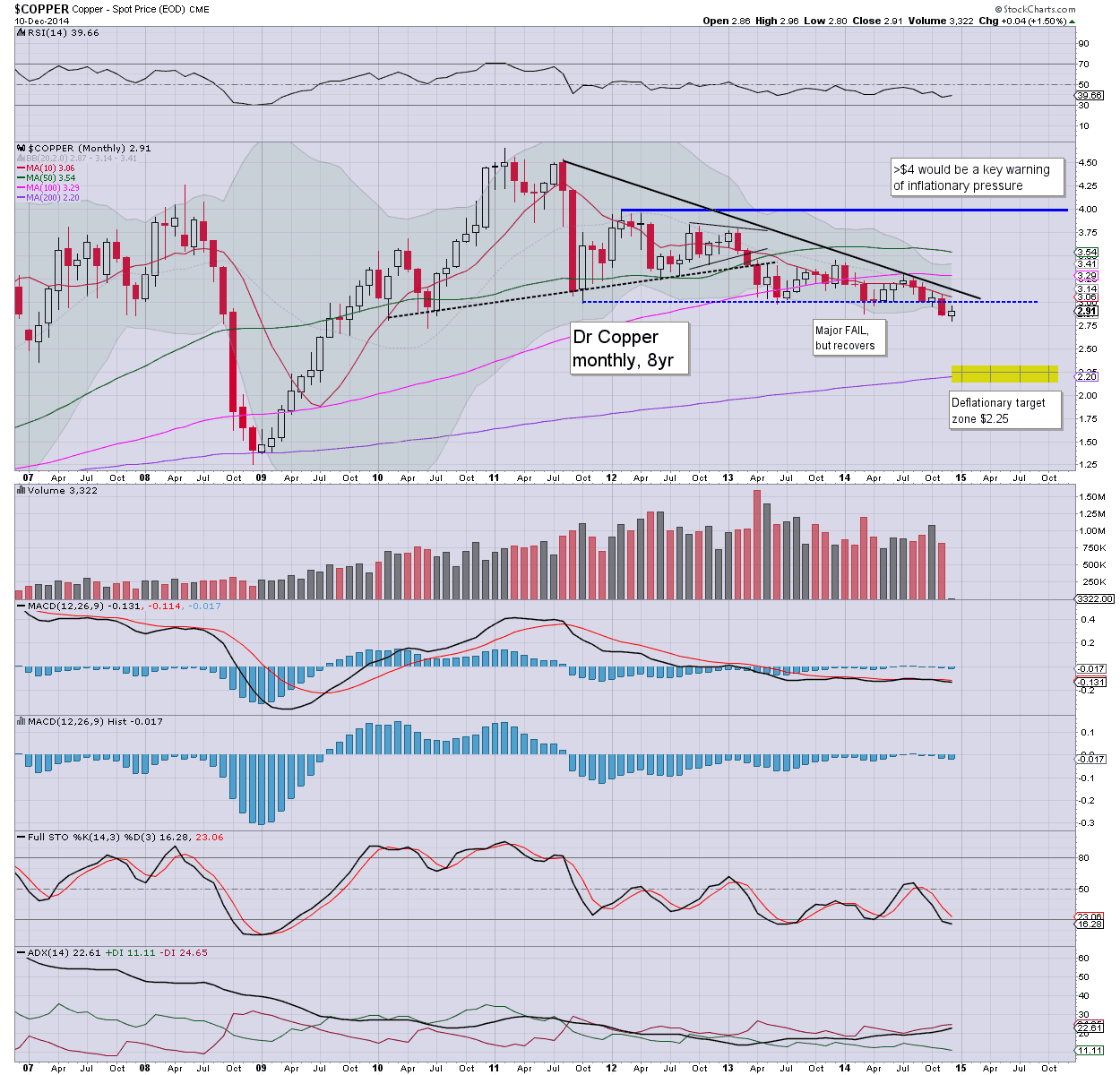 A new multi-year low for WTIC Oil of $60.43. The $60 threshold will no doubt break.. whether tomorrow, Friday..or early next year.. it should make little difference for those with eyes on the bigger picture.

As for Copper... it is consistently trading under the key $3 threshold. Considering the strength in the US Dollar, and numerous other issues, renewed weakness to the 2.30/20s looks probable. If correct, that will have severe bearish implications for stocks such as FCX and TCK.
- 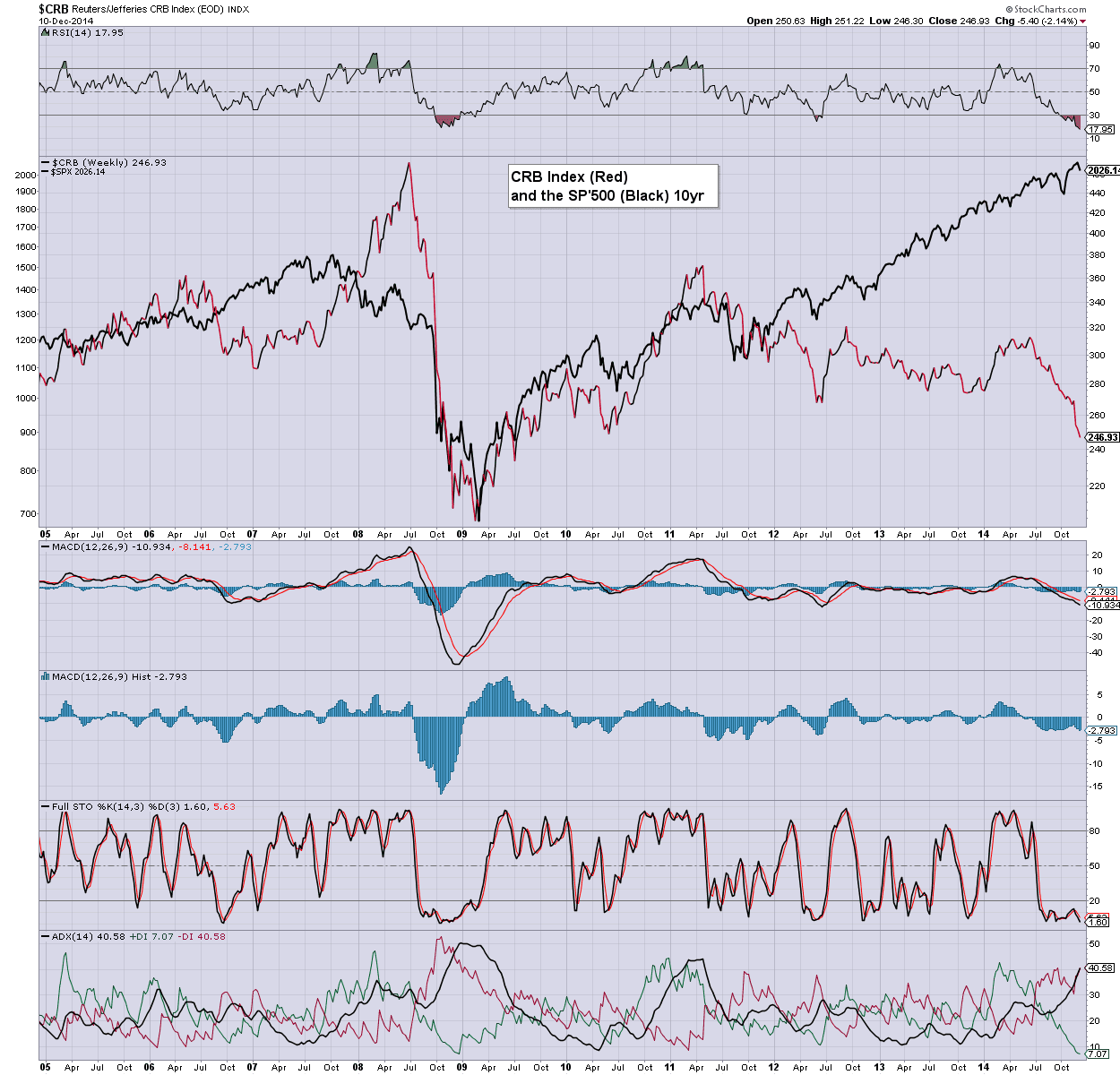 Commodities are back to levels last seen in summer 2010.. when the sp'500 was around 1000.  This great pull back from the high in 2011 makes for massively lower costs to everyone.

Further, the disparity between commodities and stocks has not been higher since 1999. At some point...the gap will largely close. My guess is that commodities will eventually recover as much of the new (QE) money finally starts to filter into the global system.
--

Along with the usual weekly jobs data, Thursday will see the only significant econ-data of the week... retail sales. 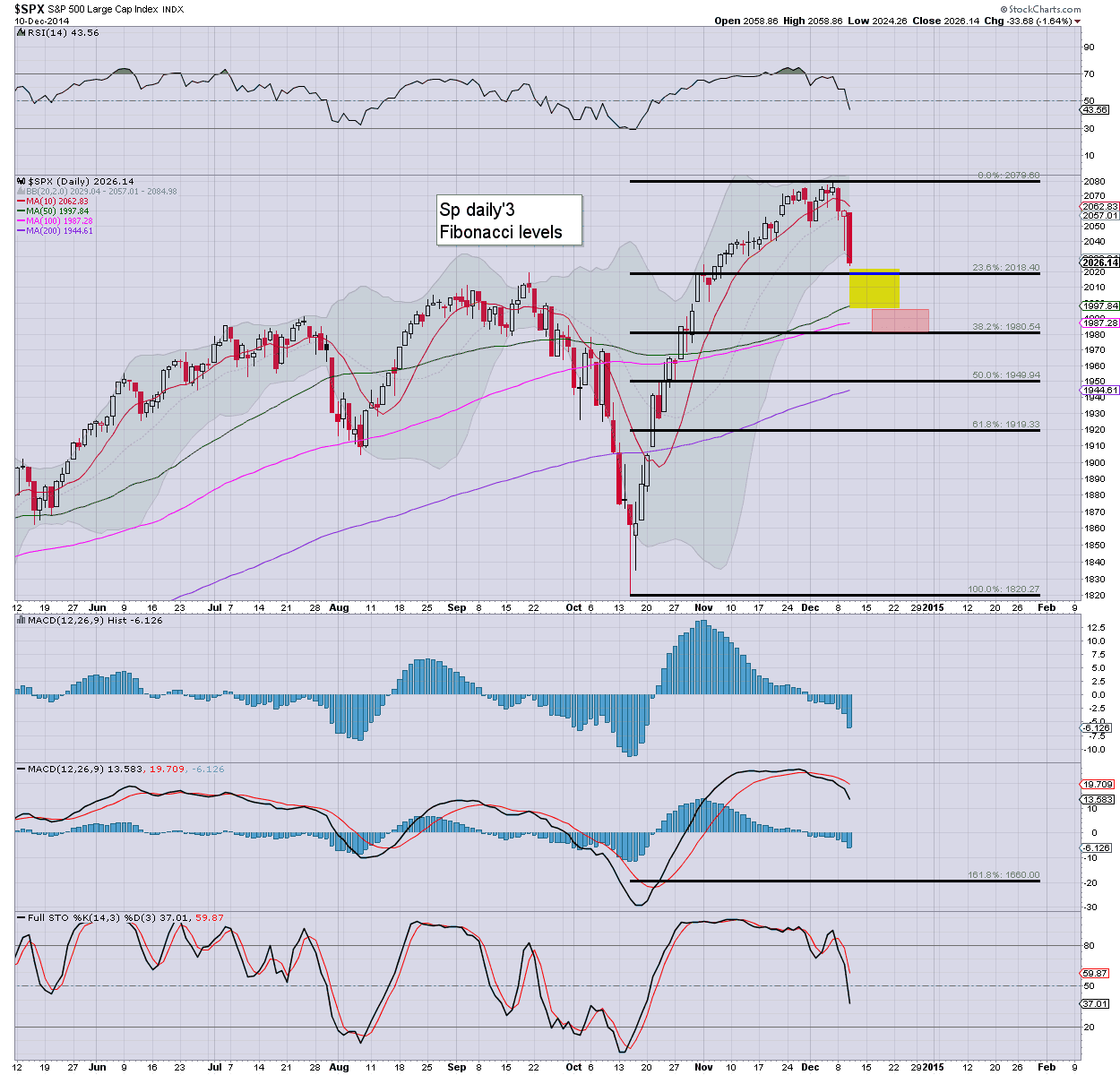 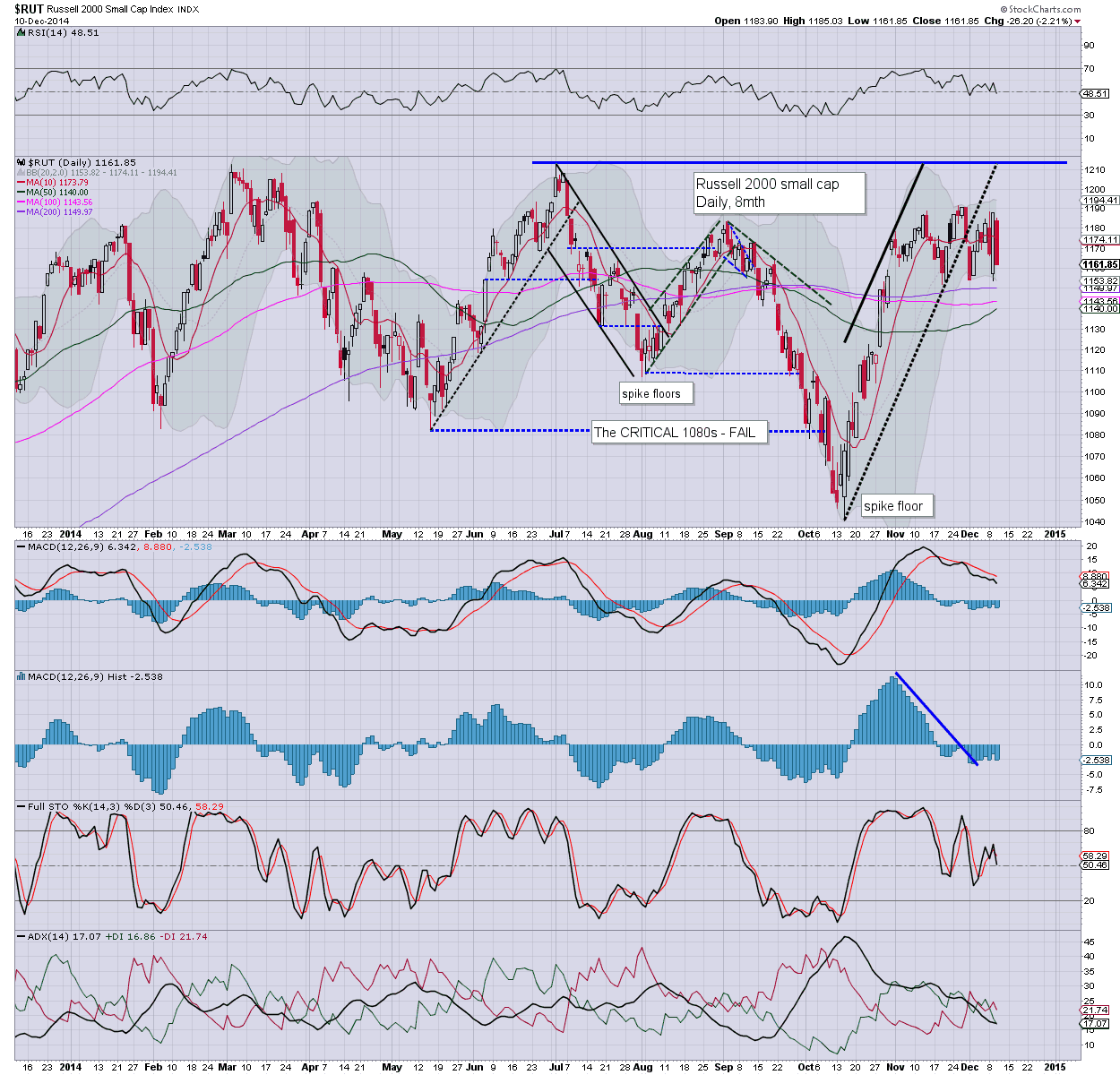 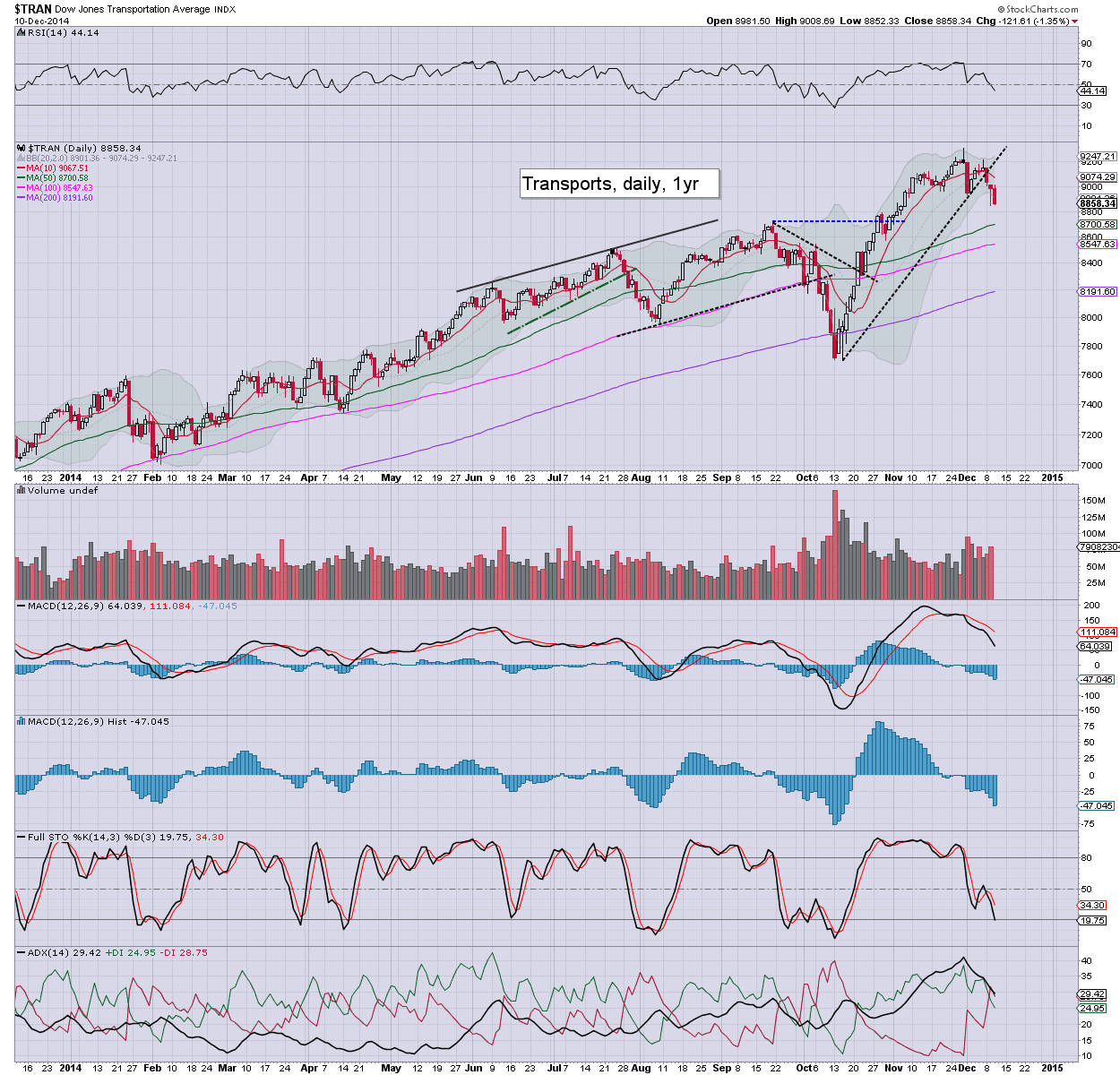 Suffice to say, yesterday was indeed a nonsense 'bounce', and whether you want to call it a wave 2, B, or X.. or whatever.. it doesn't much matter.

We're headed broadly lower into next Wednesday's FOMC... at which point we'll surely see a key turn.. with renewed upside into end year, and at least the first half of January 2015.
--