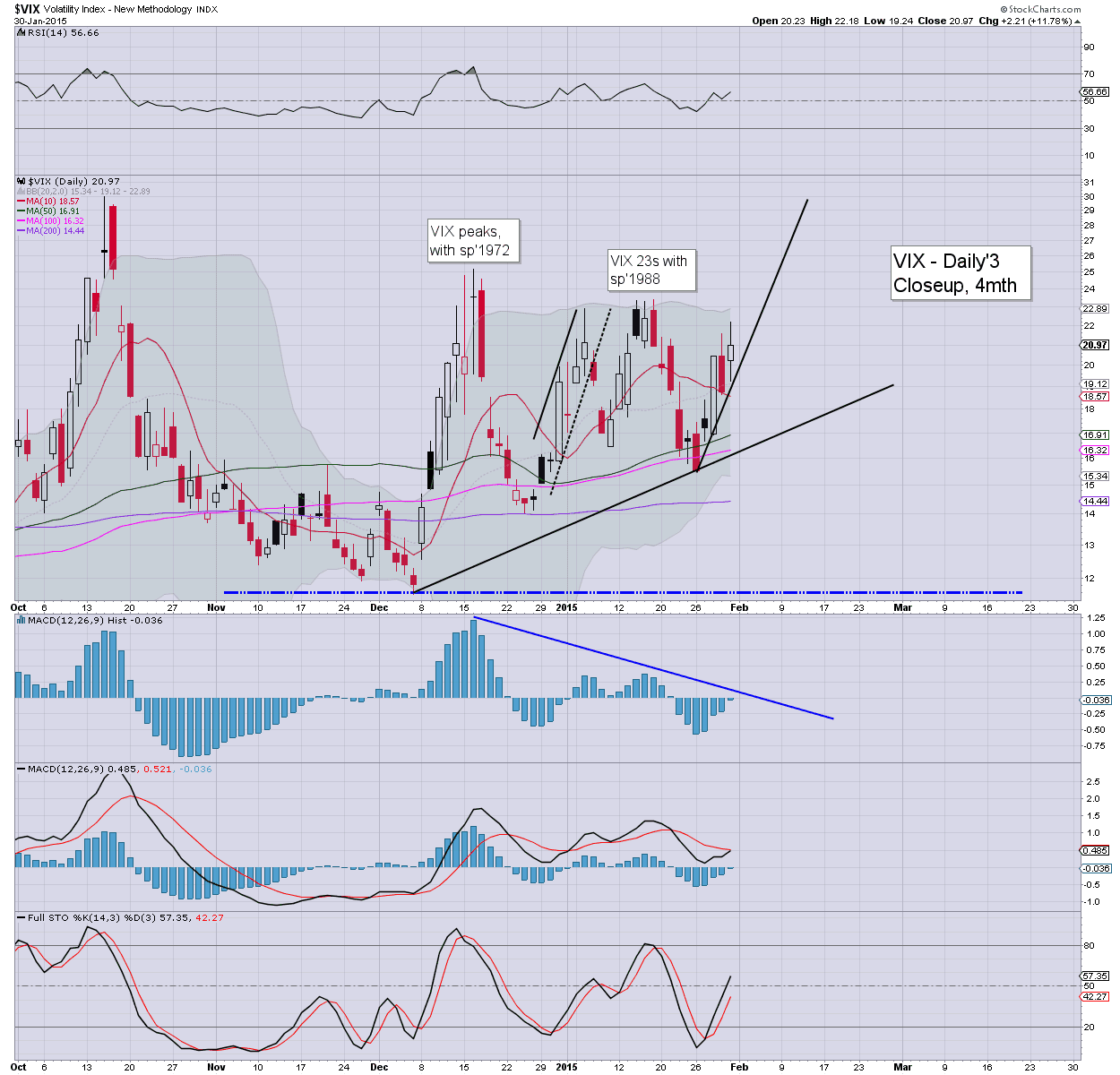 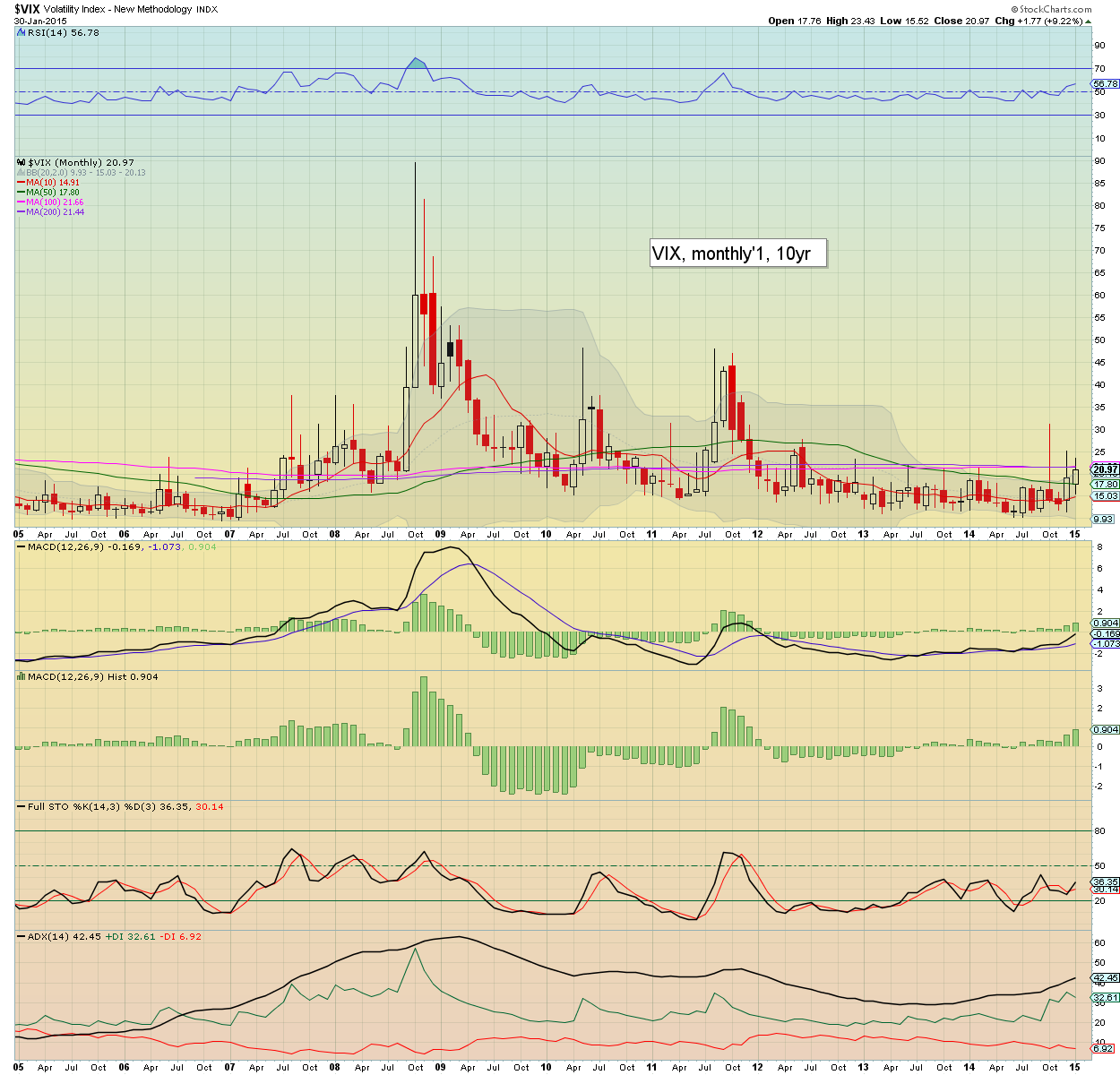 *I very rarely highlight the giant monthly chart on the VIX. Usually, there is little point... but with the VIX itself becoming more volatile.. I think it is becoming increasingly important.

The MACD (green bar histogram) cycle will turn positive at the Monday (Feb'2) open. The last time that happened was Sept'2011... when the market was being smashed around in the sp'1100s.. with VIX in the upper 40s.
-- 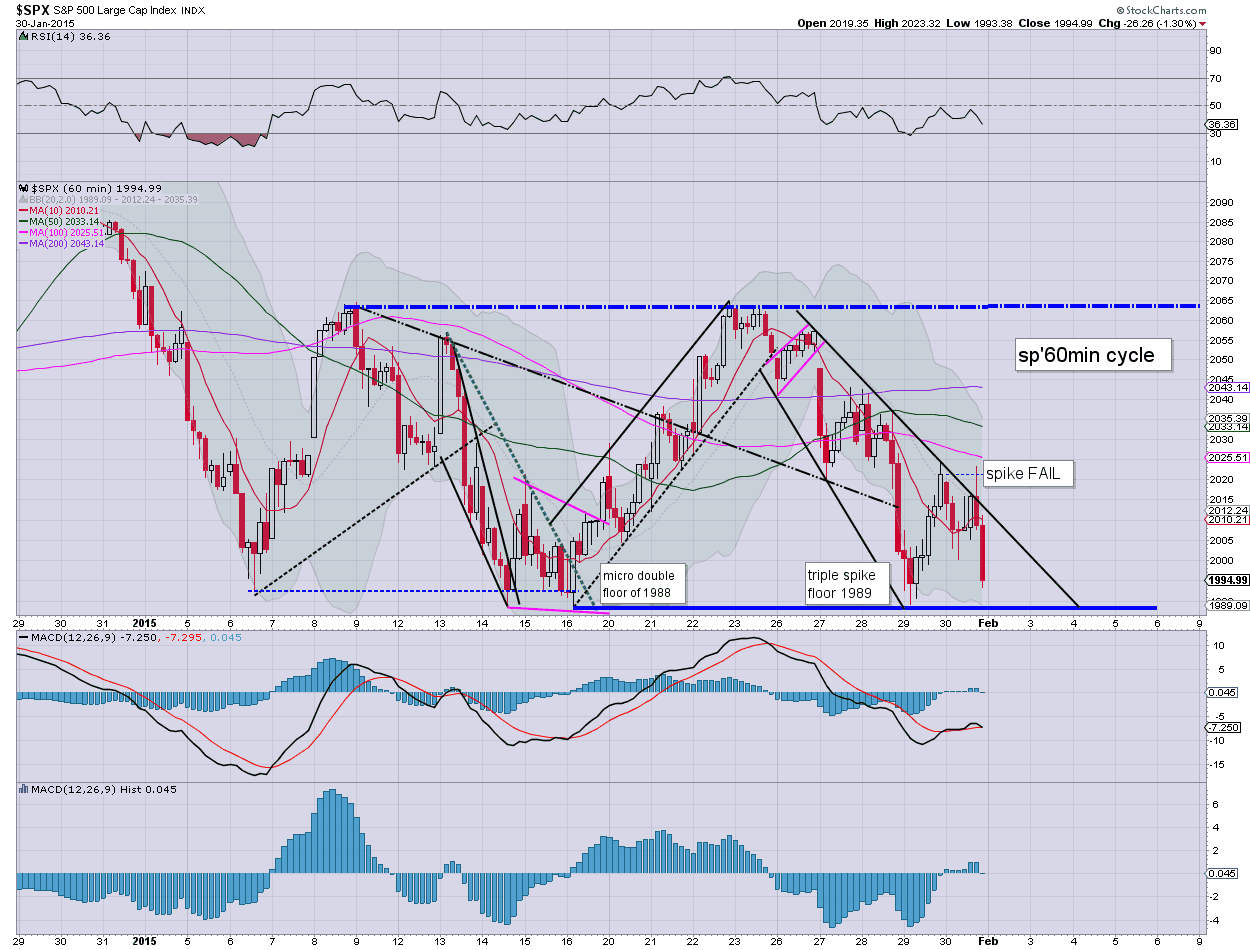 *I bailed on a legacy R2K (long) position into the close. Price action looks stinky, and there seems little point holding across the weekend.
---

This afternoon was a major failure for the equity bulls, having broken declining trend, but with a clear spike fail on the hourly chart.

Looking at the VIX monthly cycle... I have to say.. it looks like the market might be looking for a full washout to the low sp'1900s before the next multi-week up wave.

*the usual bits and pieces across the evening.. to wrap up yet another week...
Posted by Trading Sunset at 21:02:00
Email ThisBlogThis!Share to TwitterShare to FacebookShare to Pinterest 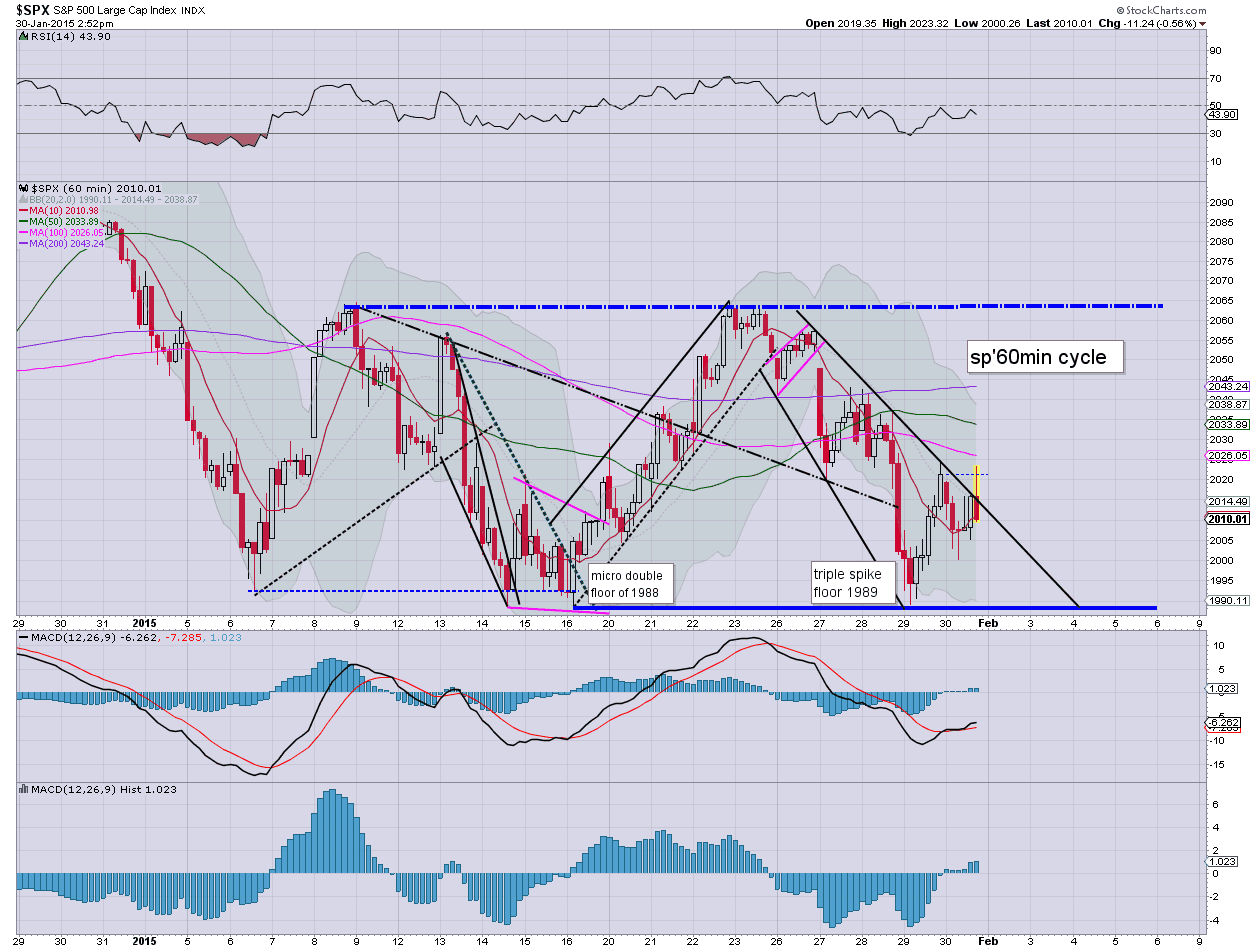 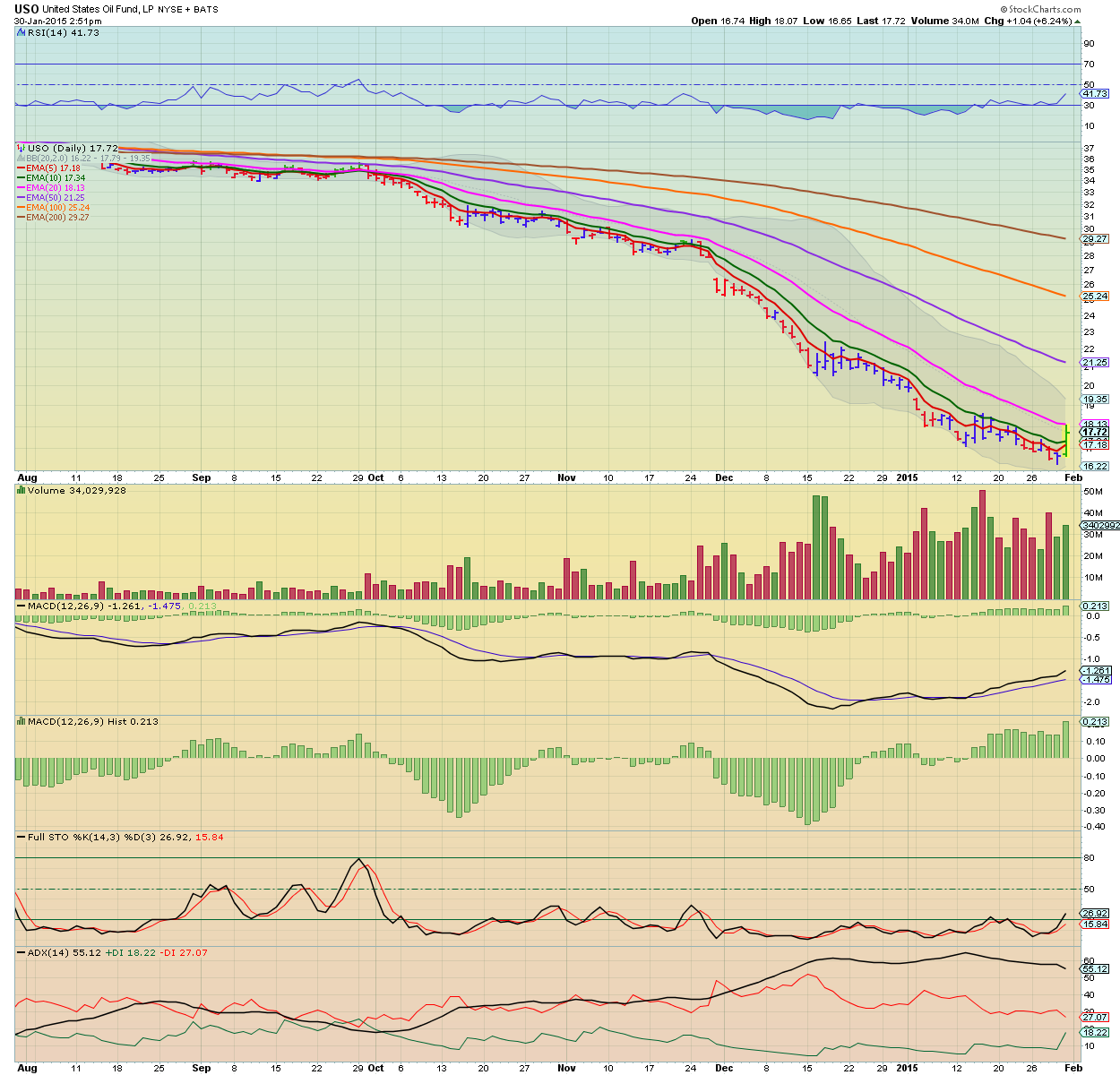 Bulls failed................ back at the close.
Posted by Trading Sunset at 19:53:00
Email ThisBlogThis!Share to TwitterShare to FacebookShare to Pinterest

With a spike floor of sp'2000, the market is making another play to break the declining resistance (which will be around 2012/13 this hour). A clear break >2015 would trigger a fair few short-stops... with a marginal net daily gain... not that it will be enough to negate a January net decline. 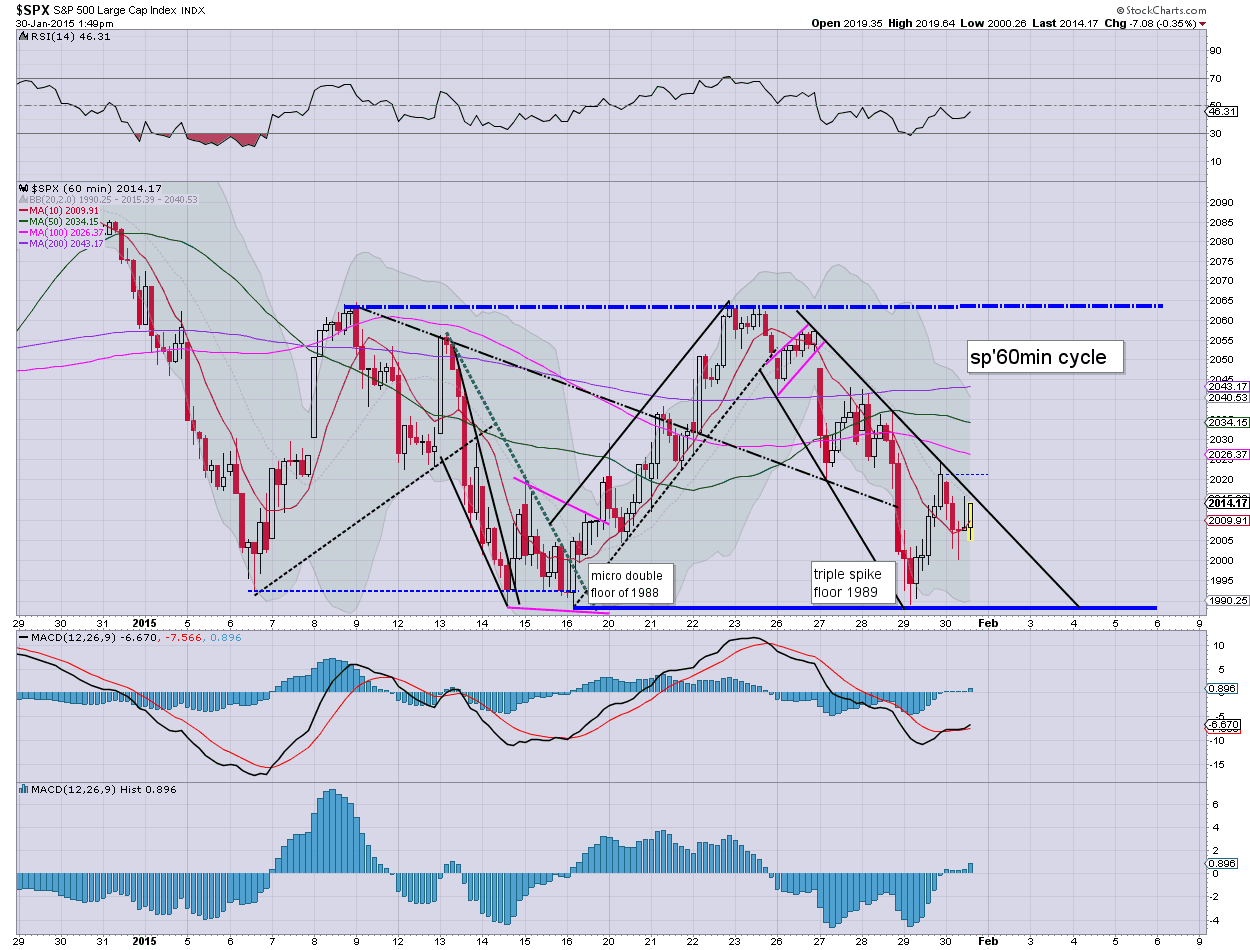 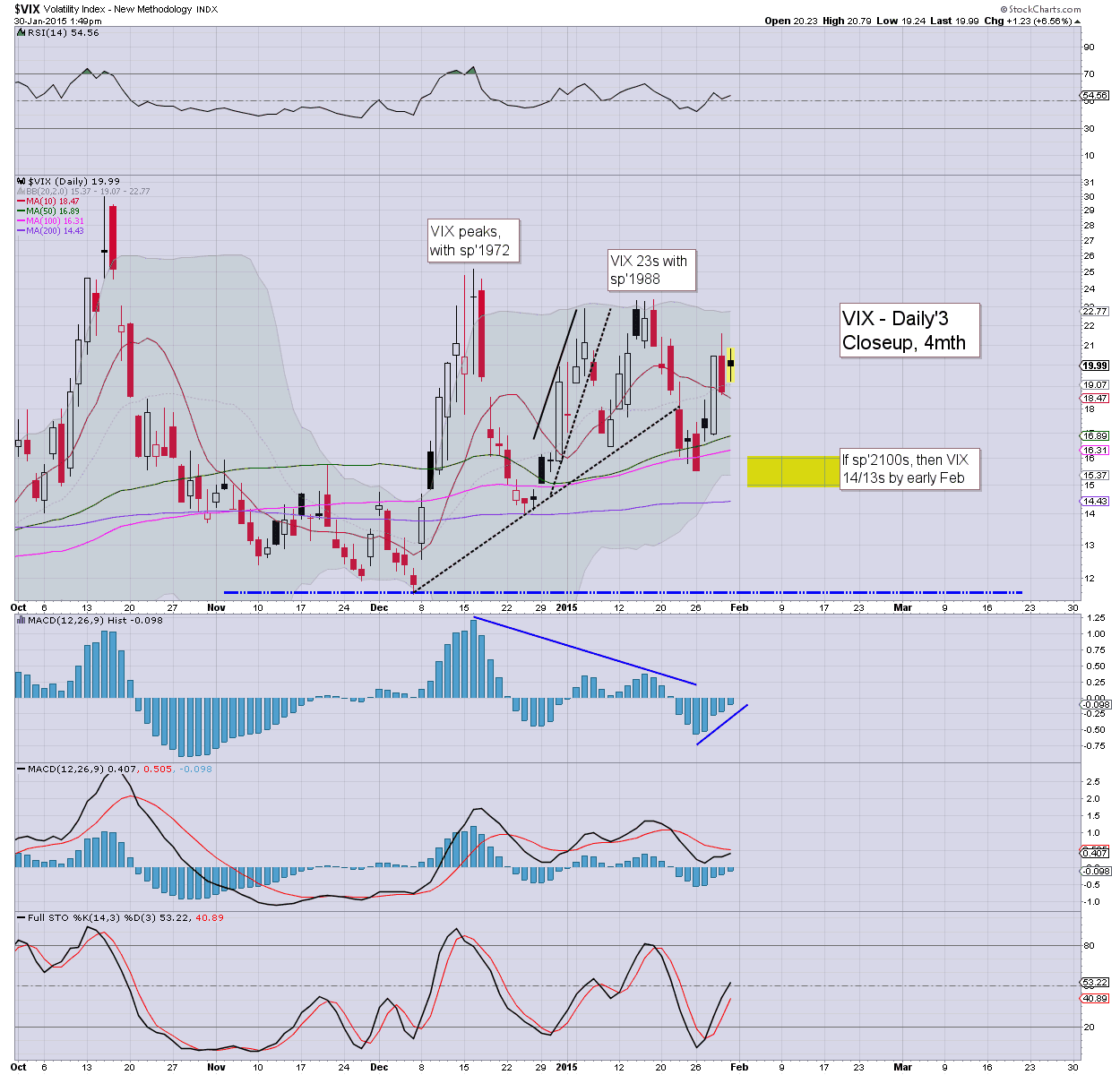 VIX daily candle... now a black-fail... bodes in favour of the bull maniacs.
--

What is surprising.. Gold is not cooling, in fact... gaining, +$23, almost negating the Thursday decline (27$) 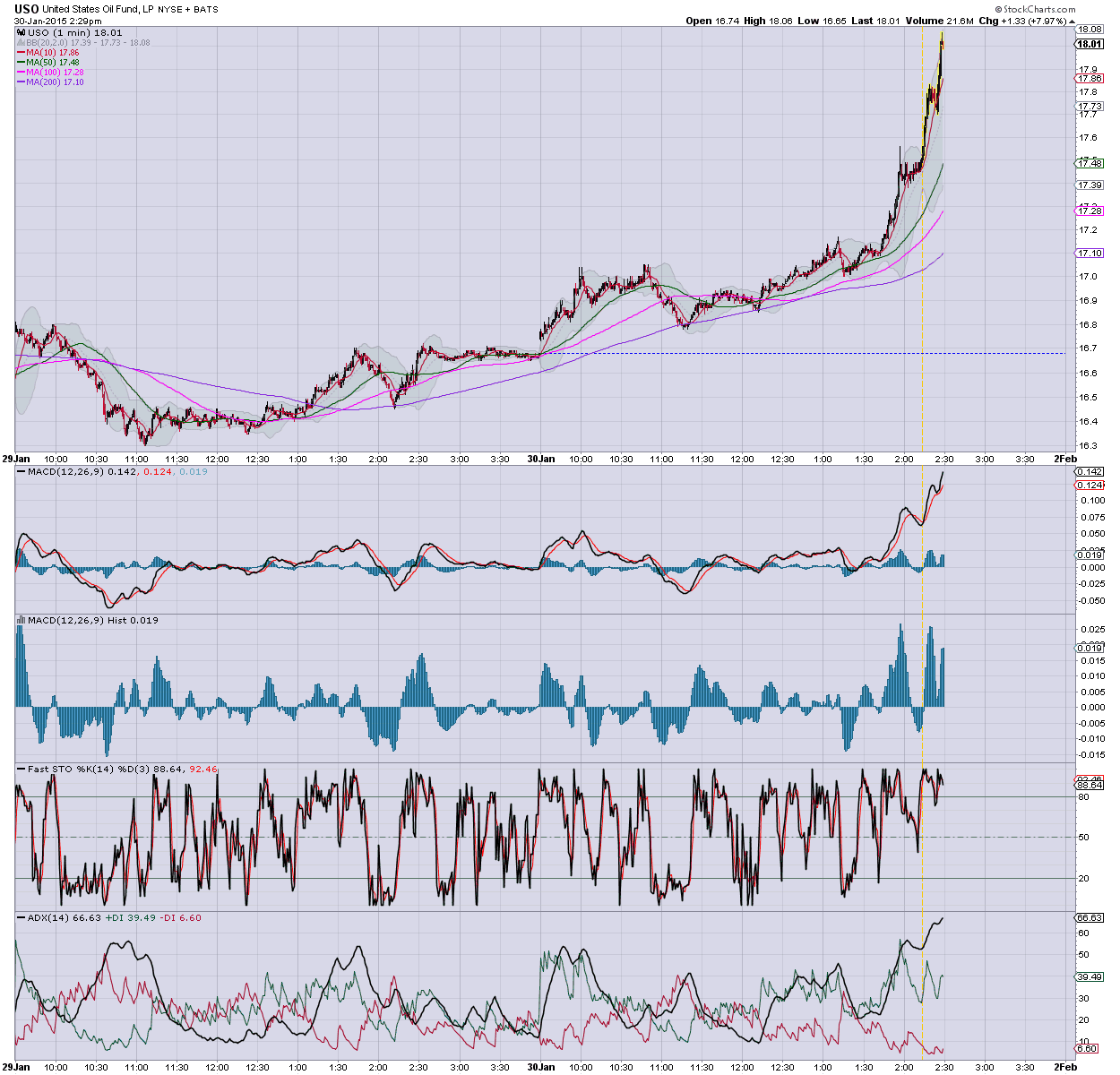 What the hell ? Did peak oil just get declared... again?
-

2.43pm... twitchy Oil cools 1% or so... sp' back to red.. but still.. we have broken resistance...
Posted by Trading Sunset at 18:49:00
Email ThisBlogThis!Share to TwitterShare to FacebookShare to Pinterest

US equities continue to struggle, unable to break declining resistance (currently sp'2020). VIX is confirming some mild concern, +10% @ 20.66. Metals are still building gains, Gold +$18. Oil is holding gains of 1.5%. A monthly close under sp'2k would be a fairly important victory for the equity bears. 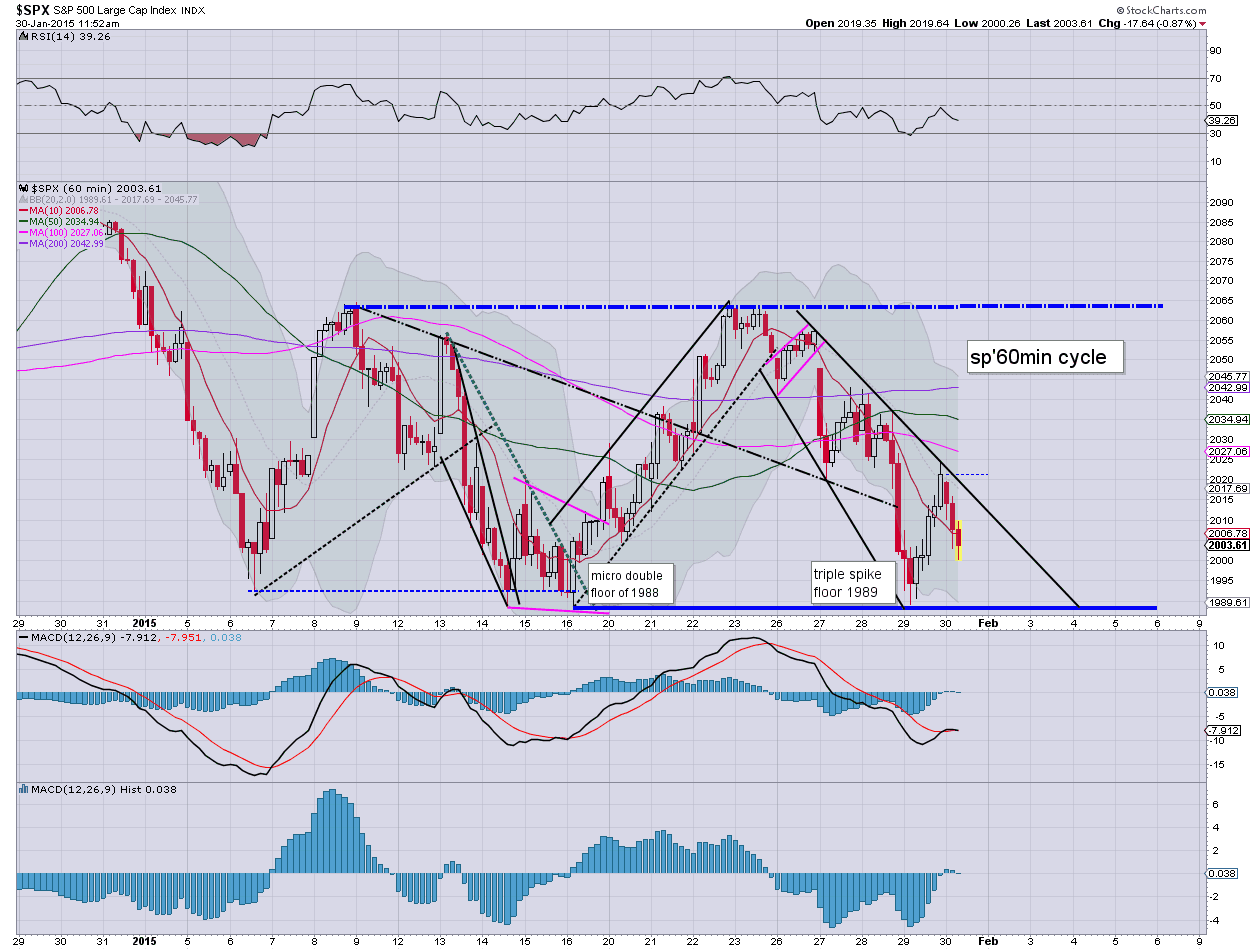 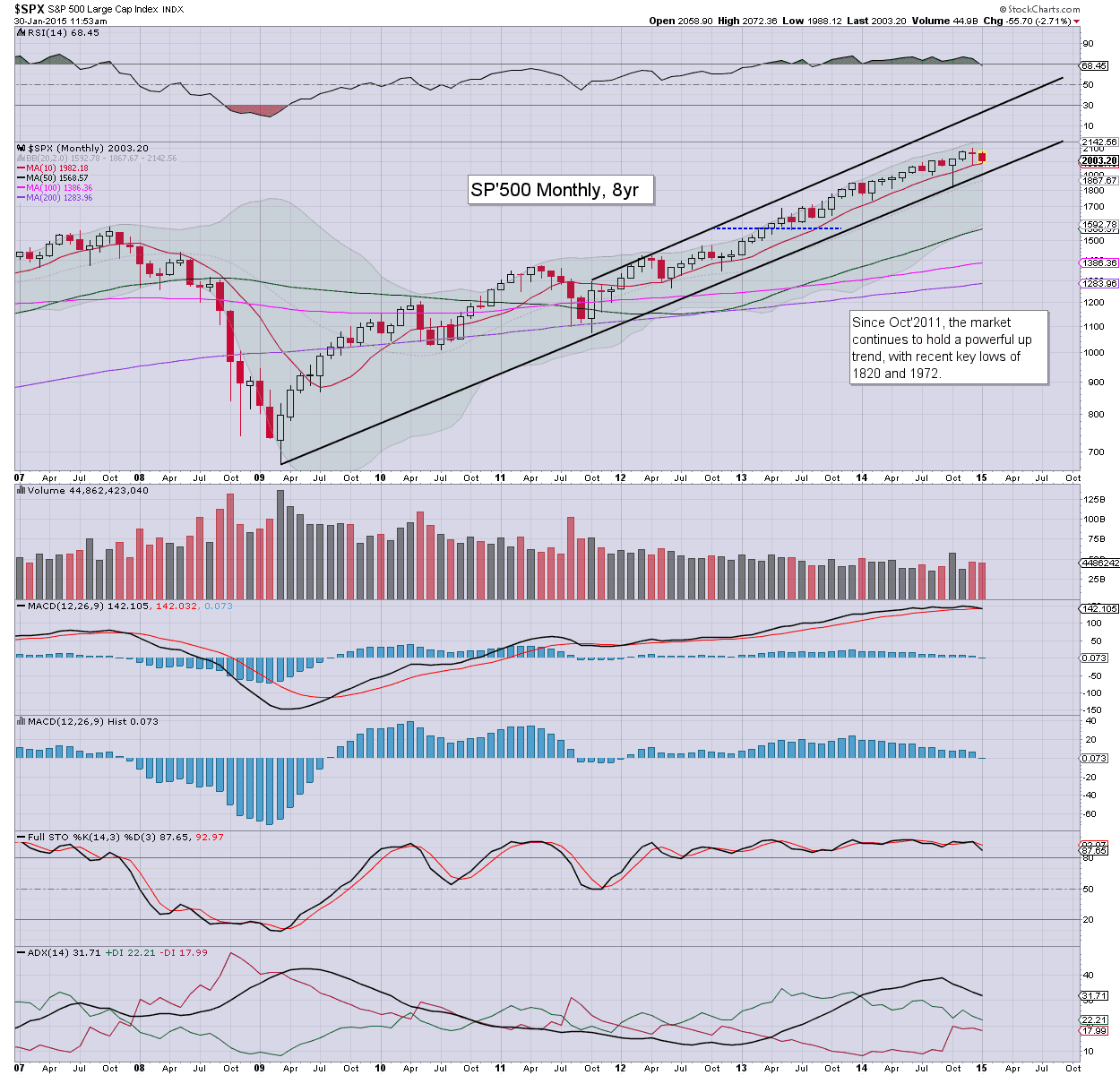 For me, how we close the month will be particularly important.

Monthly MACD (blue bar histogram) is on the threshold of settling the month with a bearish cross.. something not seen since Jan'2012.... THREE full years ago.

Notable strength: AMZN +13%.. as the momo shorts get nuked

--
time for lunch... back at 2pm
Posted by Trading Sunset at 16:56:00
Email ThisBlogThis!Share to TwitterShare to FacebookShare to Pinterest

11am update - it remains messy

US equities see renewed weakness, with an apparent morning low of sp'2002, with VIX 20.49. With a little market concern, the metals have built gains, Gold +$12. Oil is holding sig' gains of 2.0%, but will still settle January with a net monthly decline of an extreme -15% 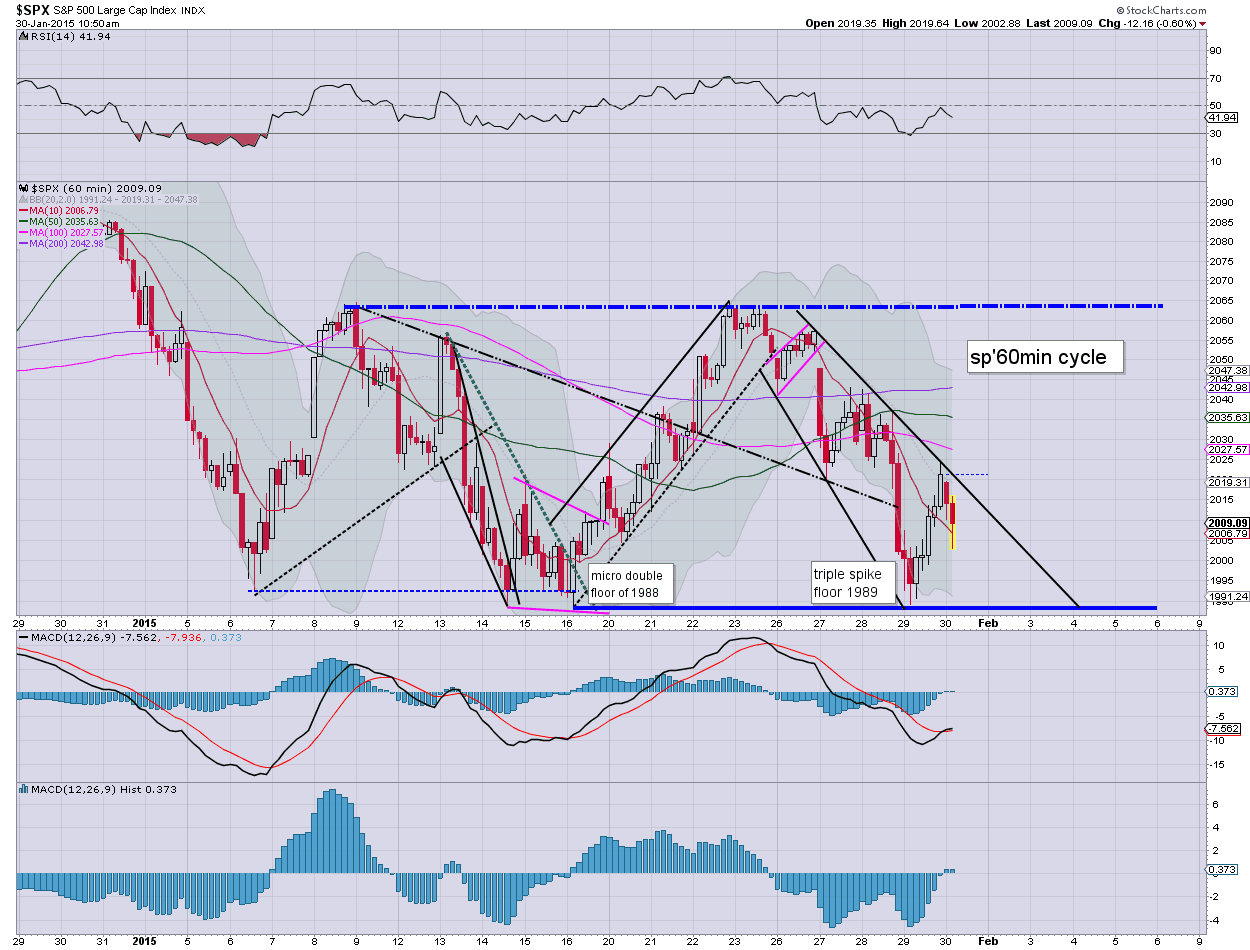 So far then.. bulls have been unable to break declining resistance.

At the close of today, resistance will be around 2012. Any net daily gain would bode bullish for next week, but still... this remains a bit of a mess. 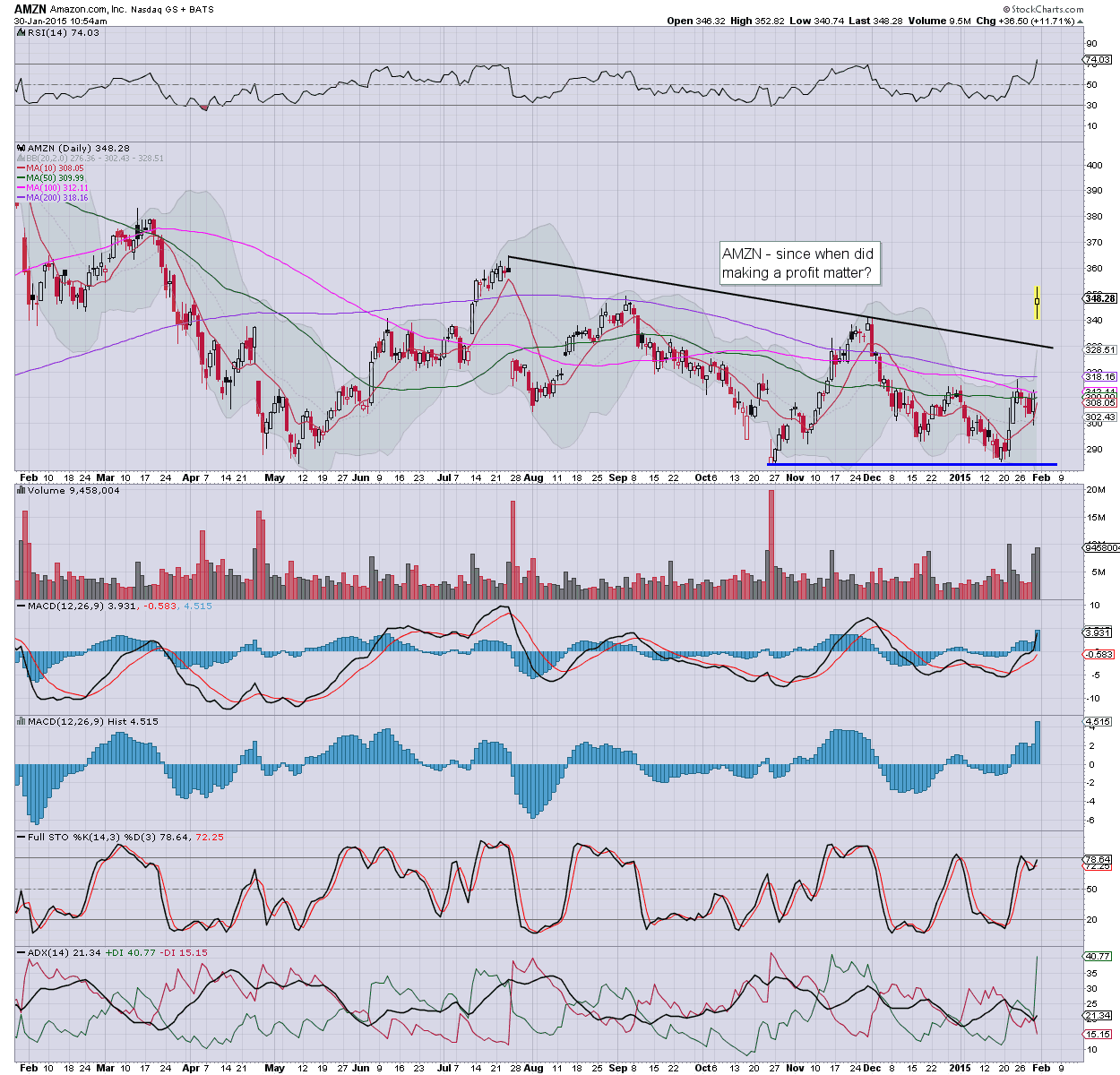 A mere PE of somewhere around 150... clearly... 'cheap', urghh
Posted by Trading Sunset at 15:54:00
Email ThisBlogThis!Share to TwitterShare to FacebookShare to Pinterest

Equities opened moderately lower, but price momentum is building to the upside.. with a rather clear hyper-spike floor hourly candle. A break >sp'2025 will open up 2045/50 zone... which would be on crazy way to end the month. Metals look vulnerable, Gold +$3 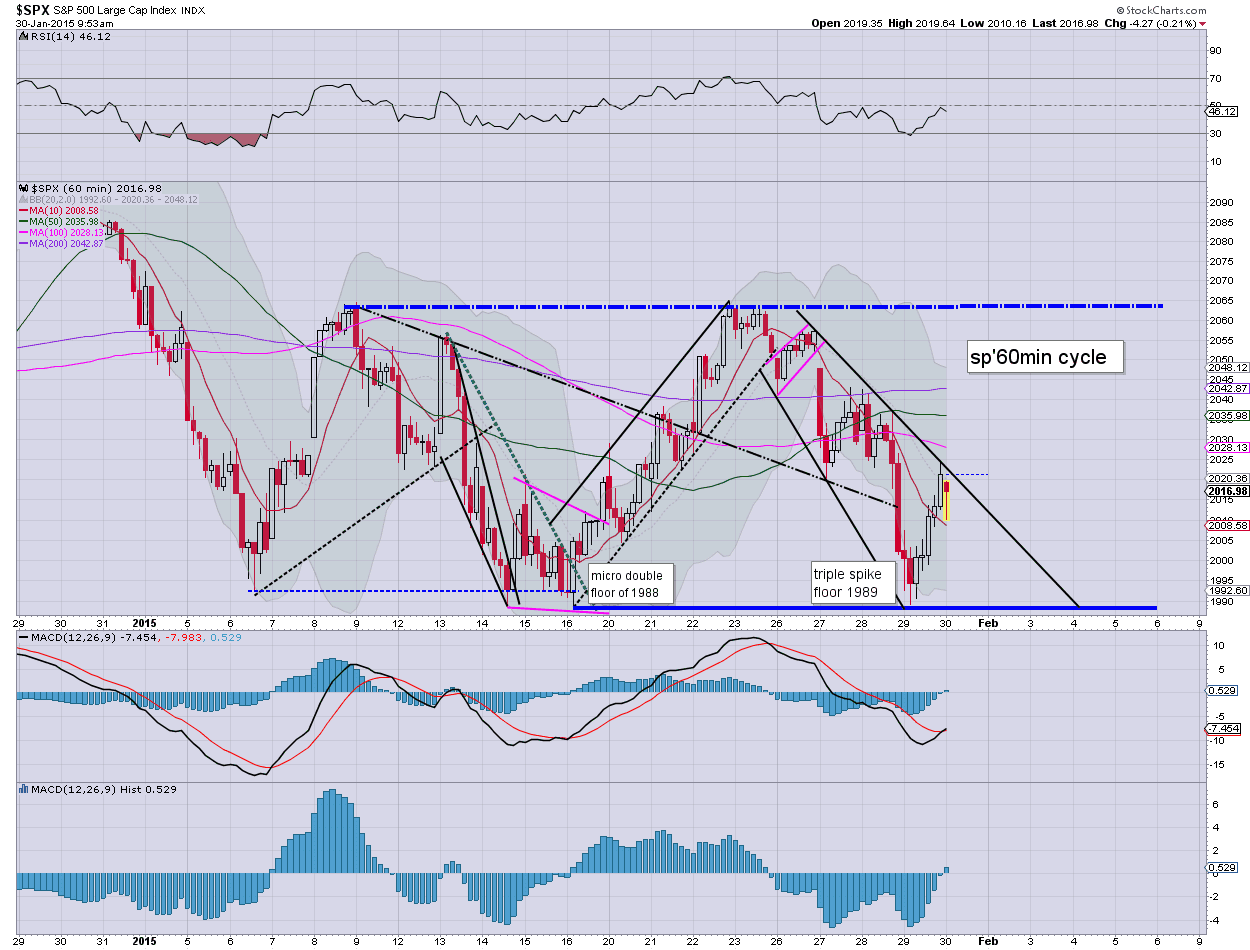 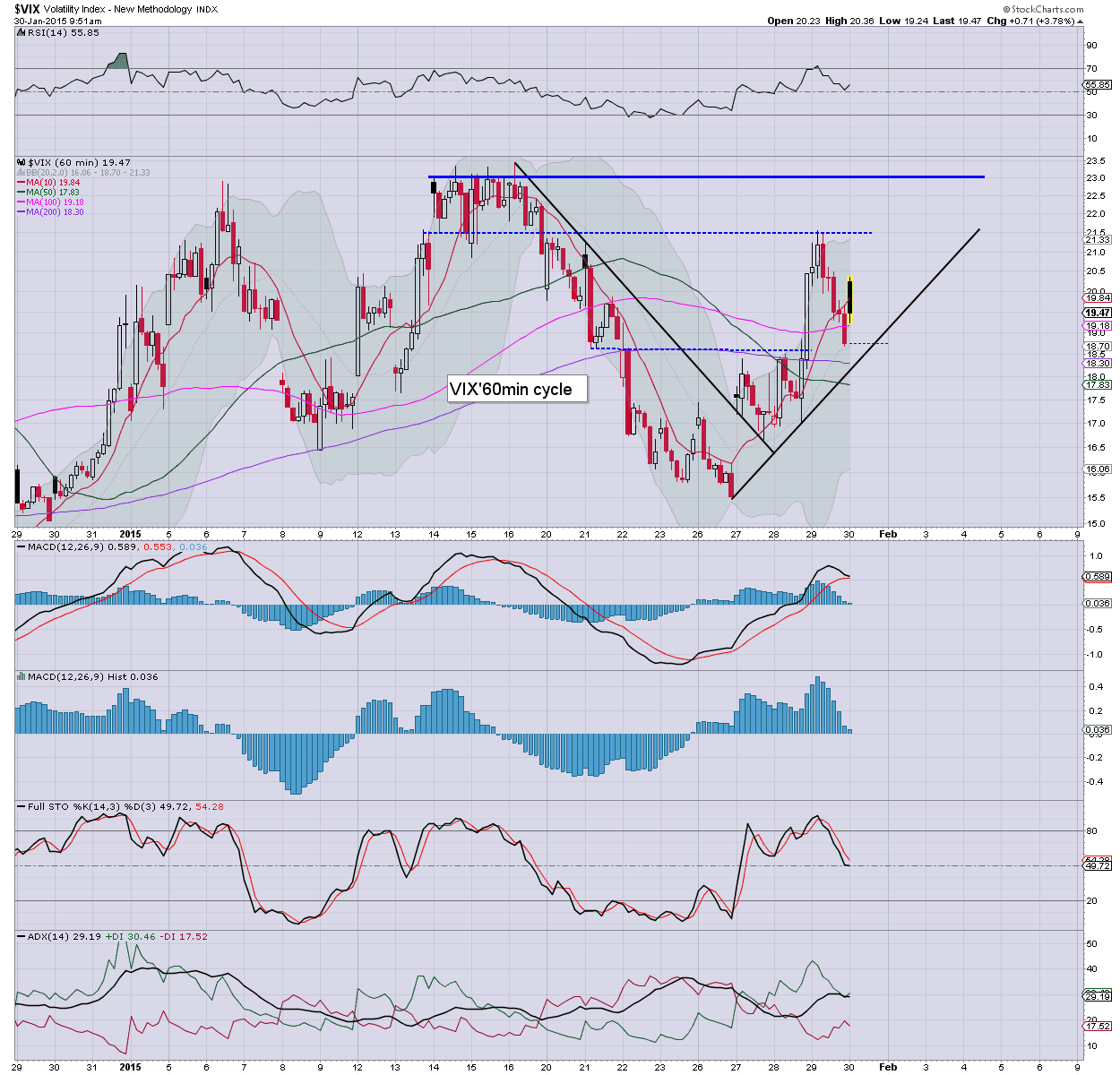 *opening black-fail candle on the VIX.... bodes in favour of the equity bulls
---

So.... the opening declines are much less than expected... and now its a case of whether the bulls can break declining trend... and battle into the 2030/40s by the close.

Equities want to turn net positive today.... eyes on a break >sp'2025.
Posted by Trading Sunset at 14:54:00
Email ThisBlogThis!Share to TwitterShare to FacebookShare to Pinterest 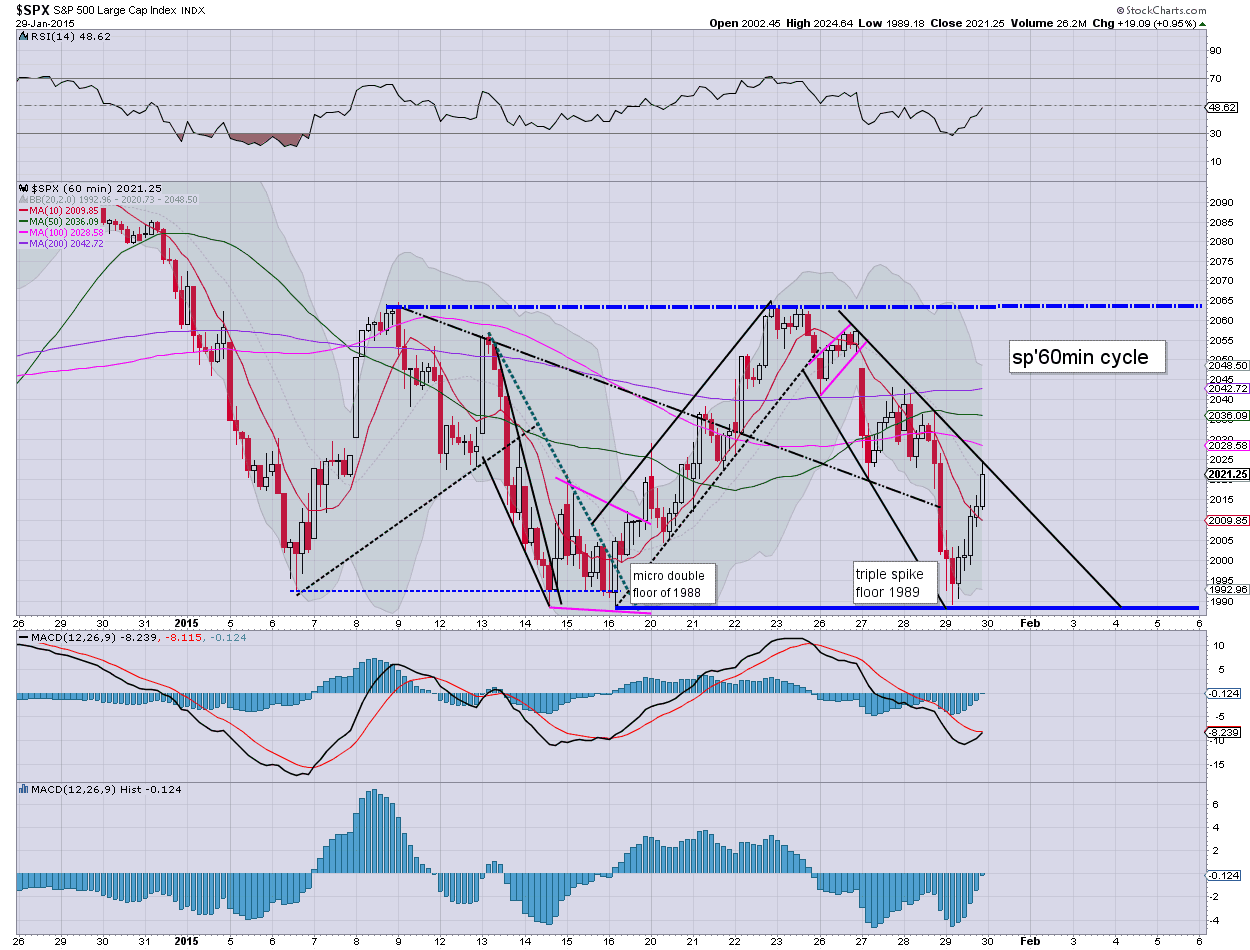 The last trading day of the year.... whether we close above sp'2000 is very important... it will determine whether we get a closing monthly MACD bearish cross.. something not seen in a full THREE years.

Hyper-spike floor hourly candle on the indexes... bears beware!
Posted by Trading Sunset at 13:21:00
Email ThisBlogThis!Share to TwitterShare to FacebookShare to Pinterest

Two months in a row

With just one trading day left of the month, US equities are set for the second consecutive net monthly decline. Even if the sp'500 can rally 1% on Friday (which won't be easy), it would still result in a red January. 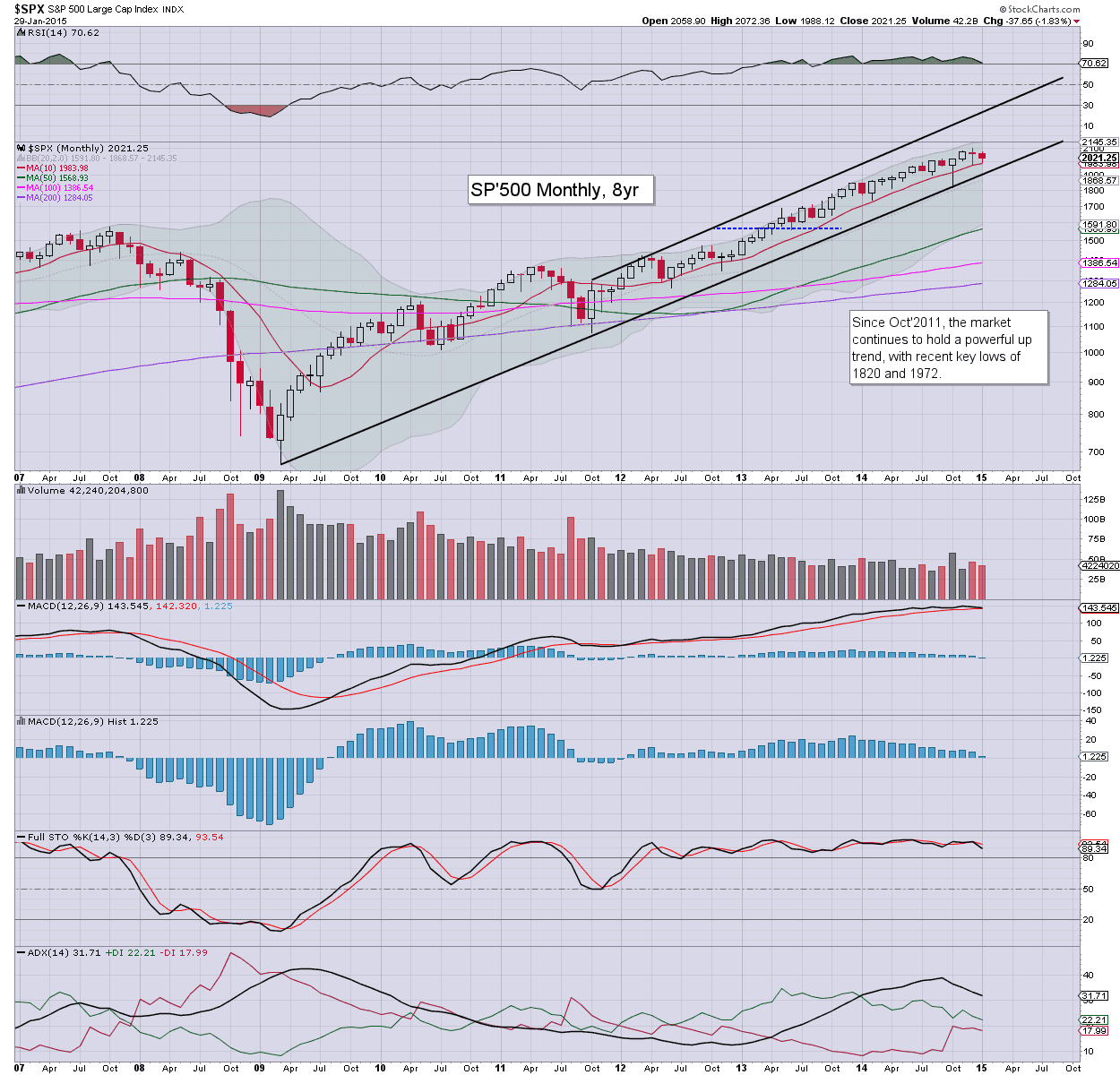 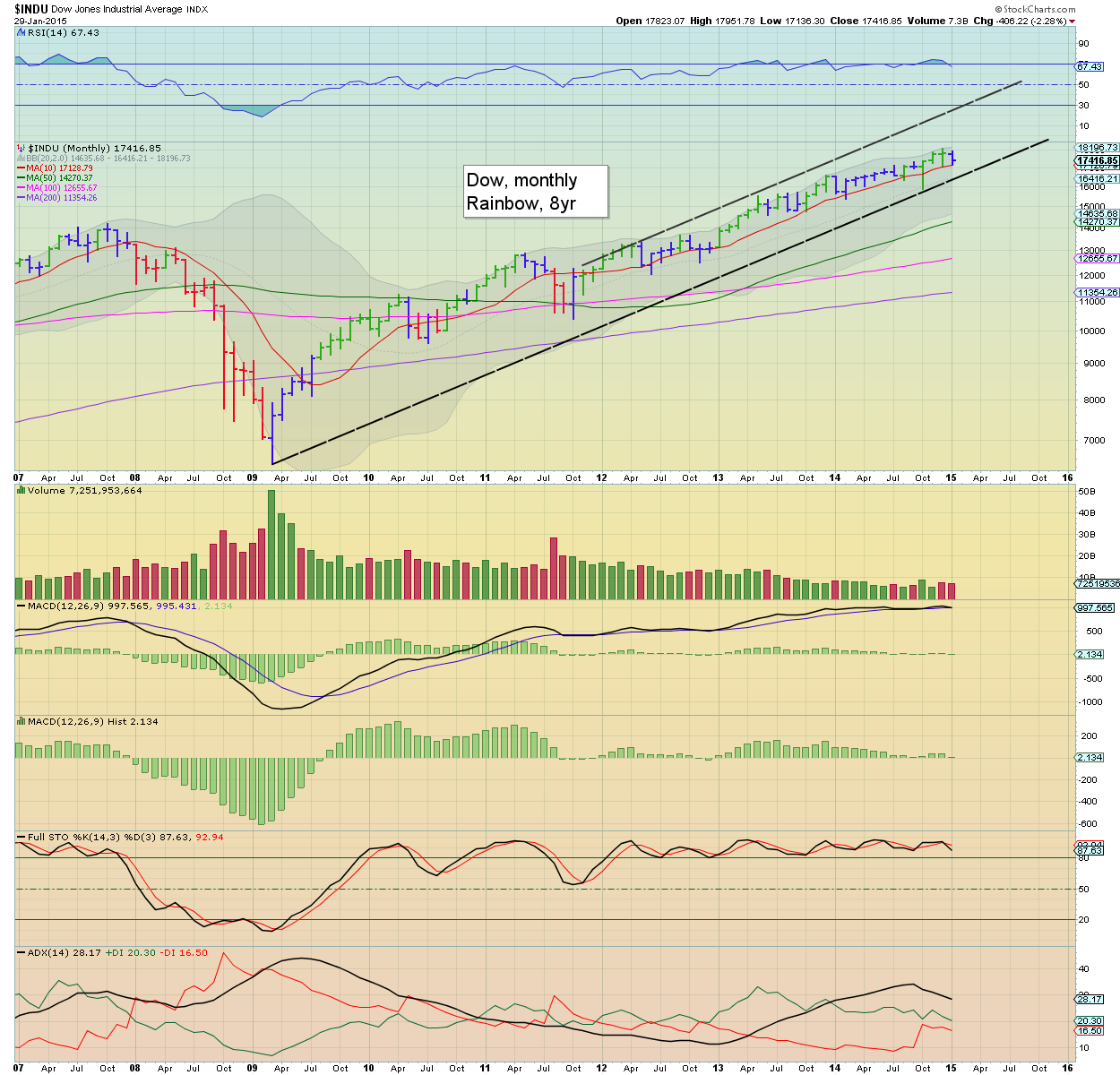 *Its been a tiresome day... I'll keep this short.

Suffice to say, a second month of declines, but overall.. it is NOT significant, and the primary upward trend remains intact.
--

Friday is rather important.

US GDP Q4, market is expecting 3.2% growth. Clearly, any number in the mid/low 2s would be a real disappointment. Personally, I'm expecting something in the 3s,, but as ever... this will only be a first reading... and subject to some possibly major revisions. 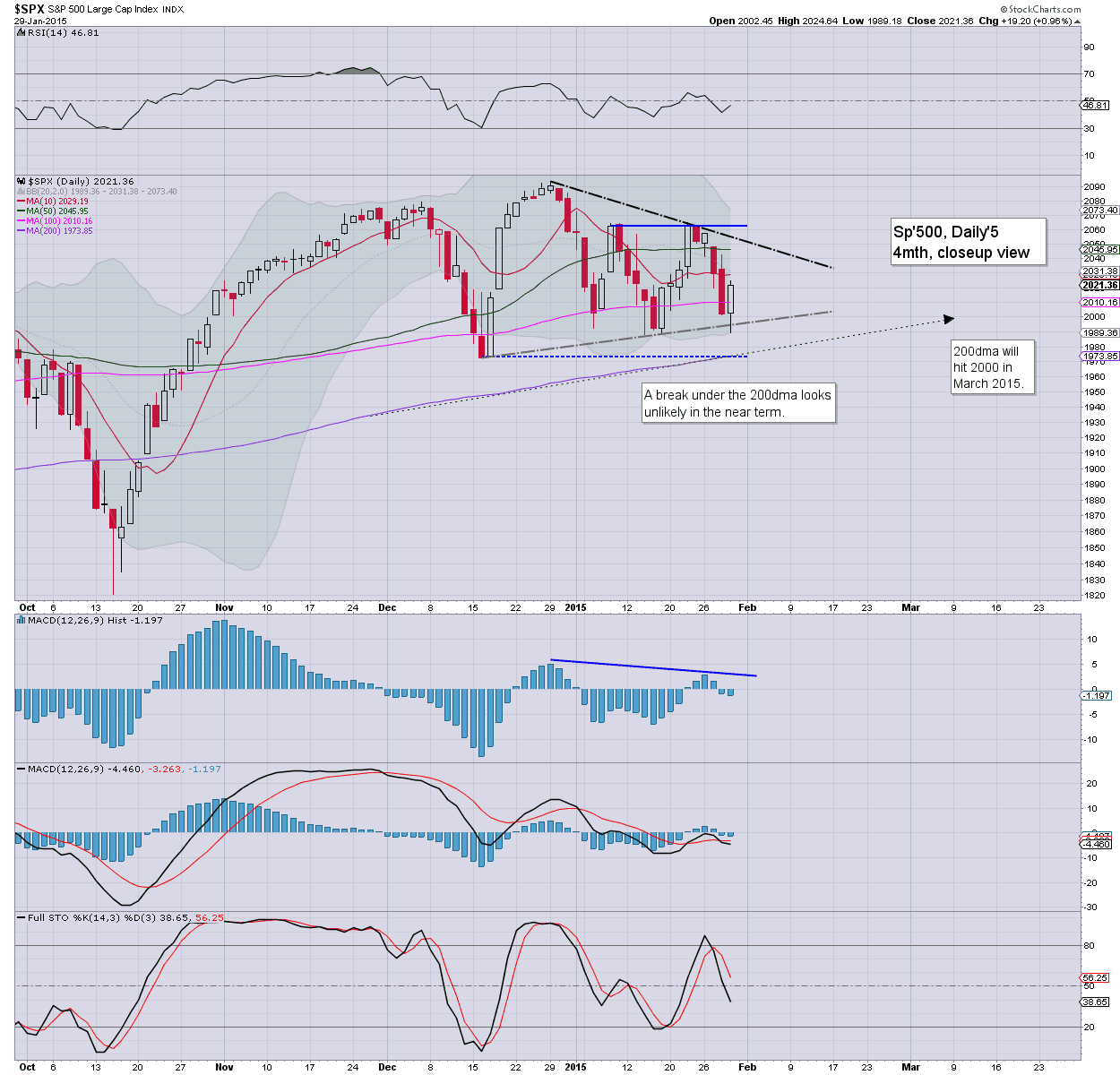 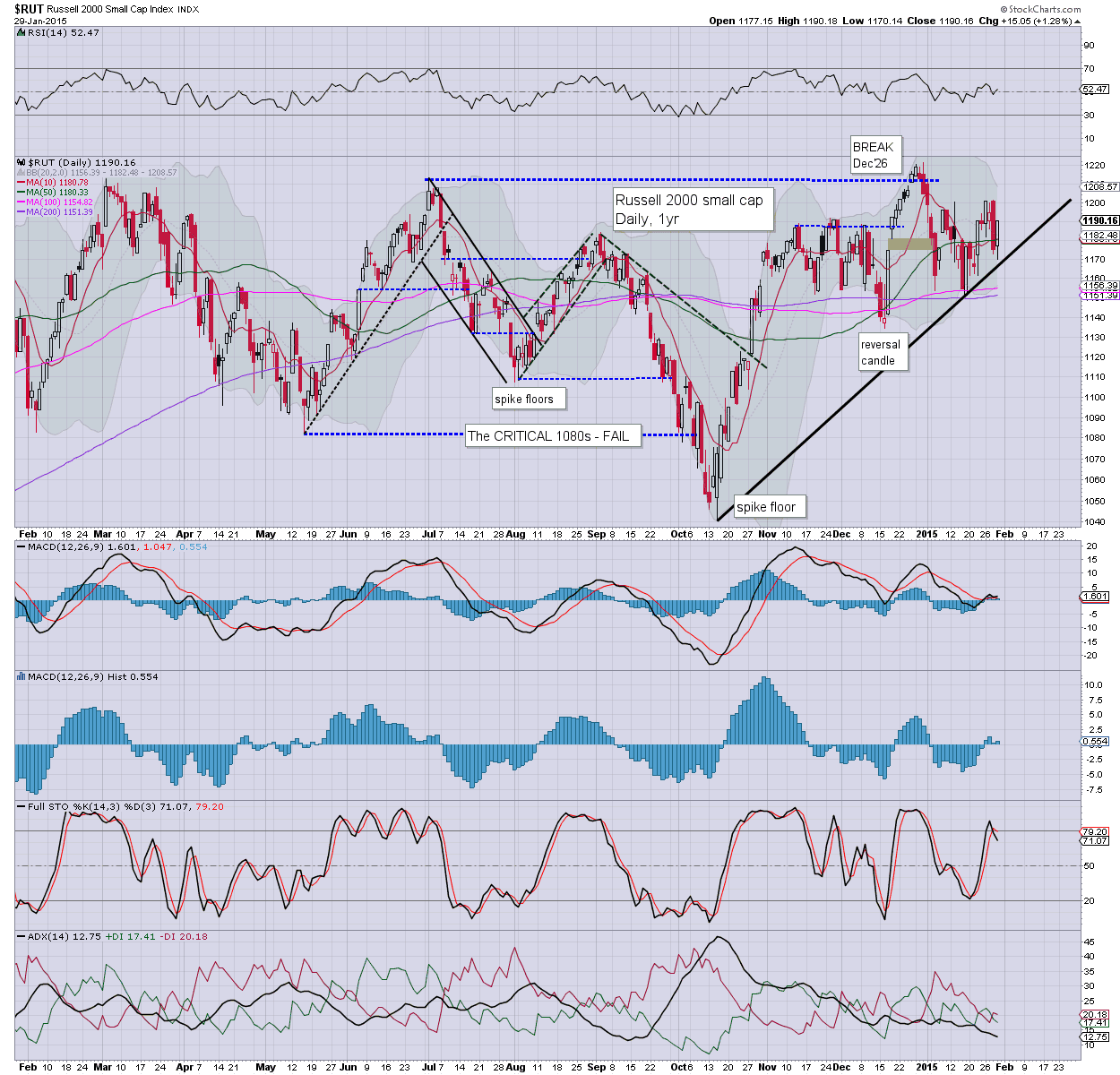 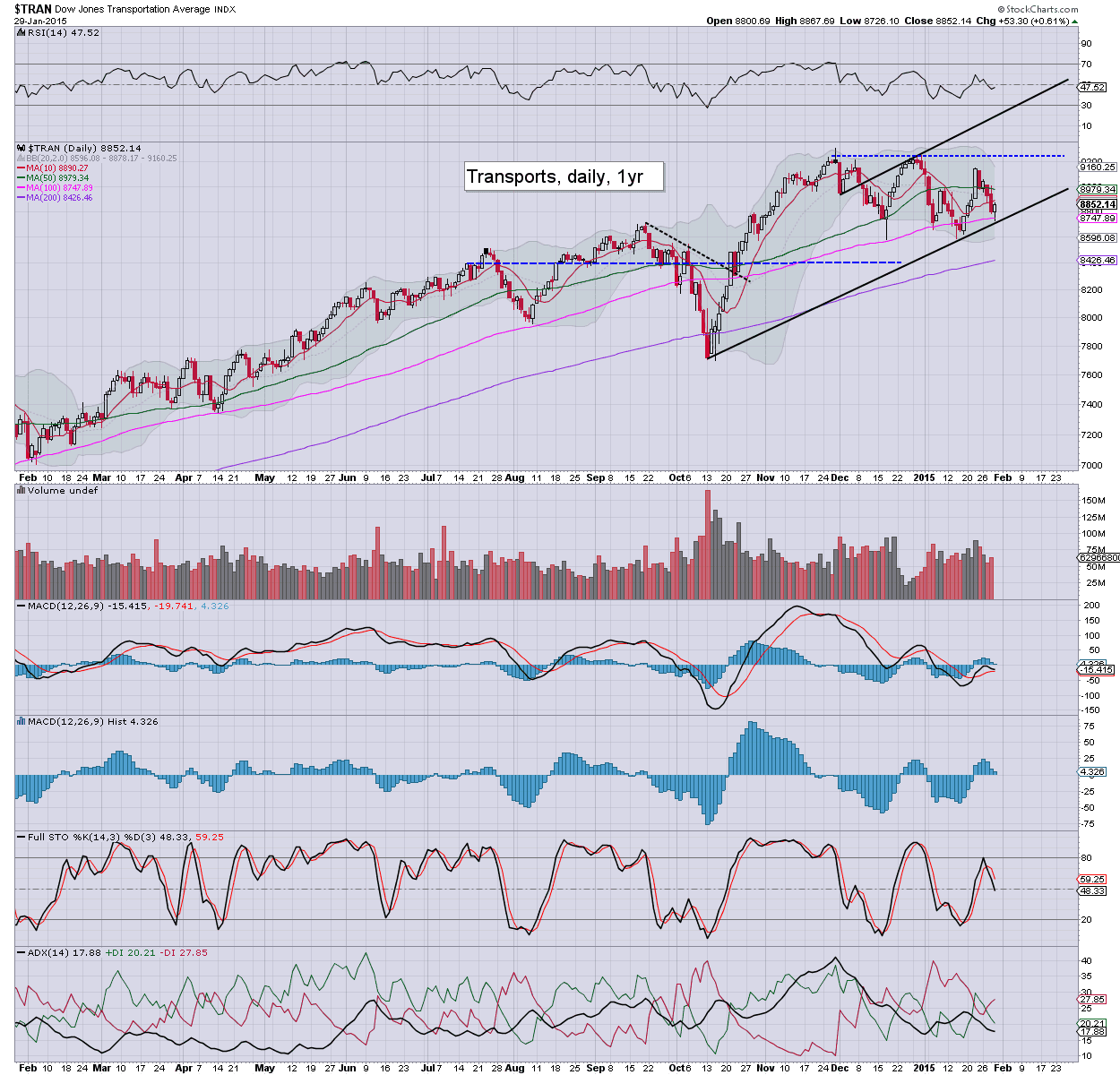 *Trans - 'old leader', is particularly interesting, since it is bouncing off rising trend.
-

The sp' and most indexes though, look a bit of a mess. Market has been broadly stuck since early December. Until we're back above sp'2064.... market is vulnerable to more considerable downside.