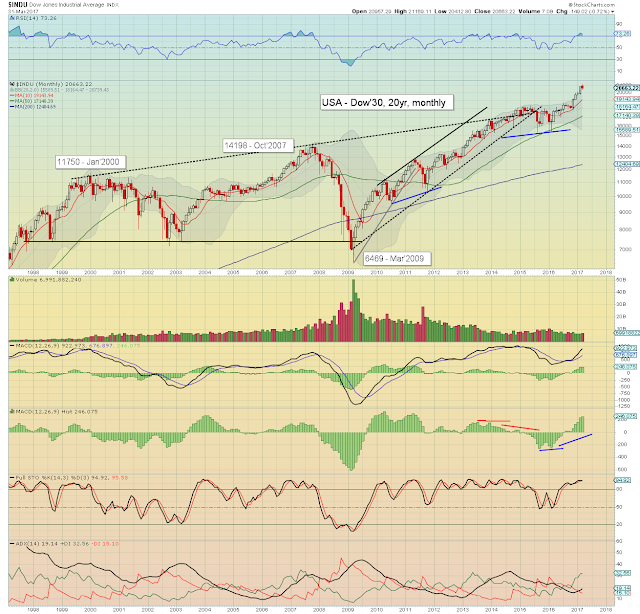 Equity bears have nothing to tout unless a break under 20k, even then, the Nov' low of 17883 is a long way down, and looks out of range for a long time to come.
-- 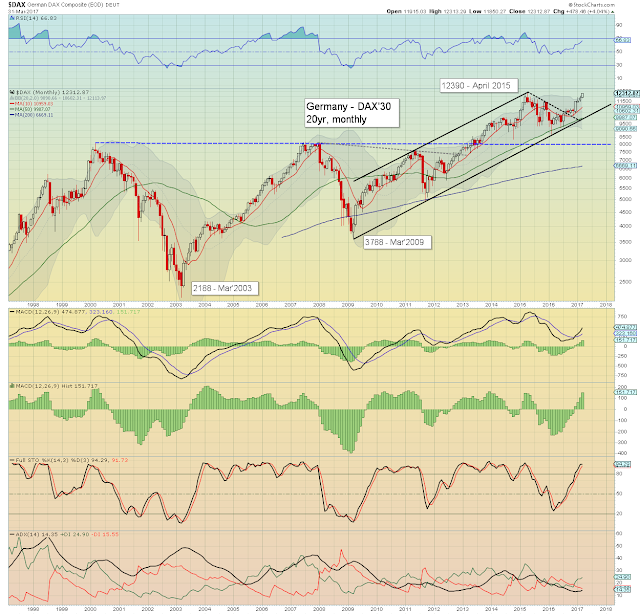 Wave structure - from the 2009 low, is a rather clear five waves. Core support is the 8k threshold. If you consider that the next bear market will be on the order of 50%, then DAX 15/16k would be the natural target. Its possible though that 13/14k would suffice before maxing out in late 2017/early 2018. By year end, rising trend will be around 11k, and equity bears have little to tout unless that is broken. 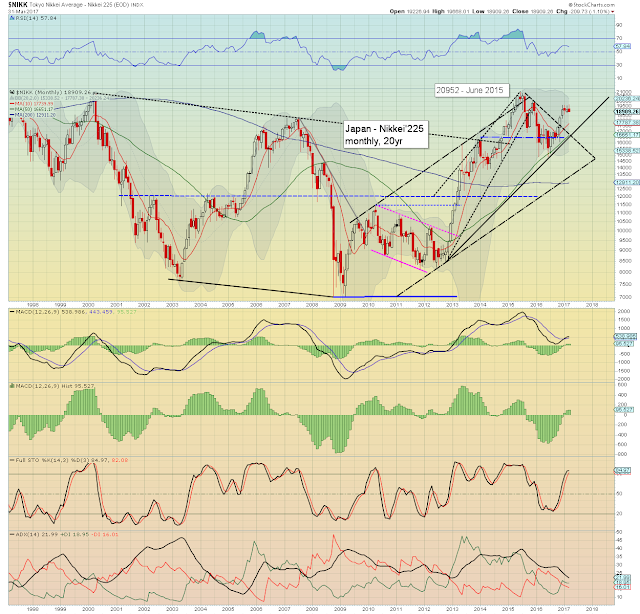 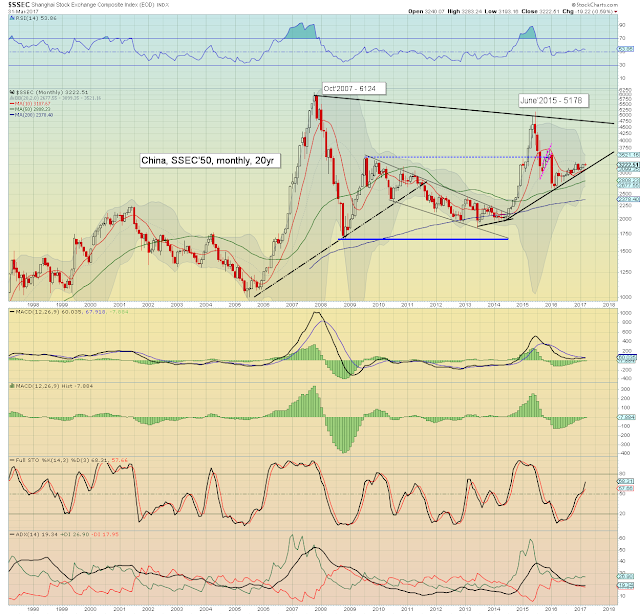 Chinese equities settled -19pts (0.6%) to 3222. Price action has been very tight. Its notable that key rising trend is only marginally below current prices. Any break under the 10MA (3100s) would be a real problem, and threaten a summer decline to at least 2800... which is a clear 10% lower. Underlying price pressure is set to turn fractionally positive in April, which would be the first time since Sept'2015. No doubt, the communist leadership will fight like hell - via the PBOC, to maintain rising trend. 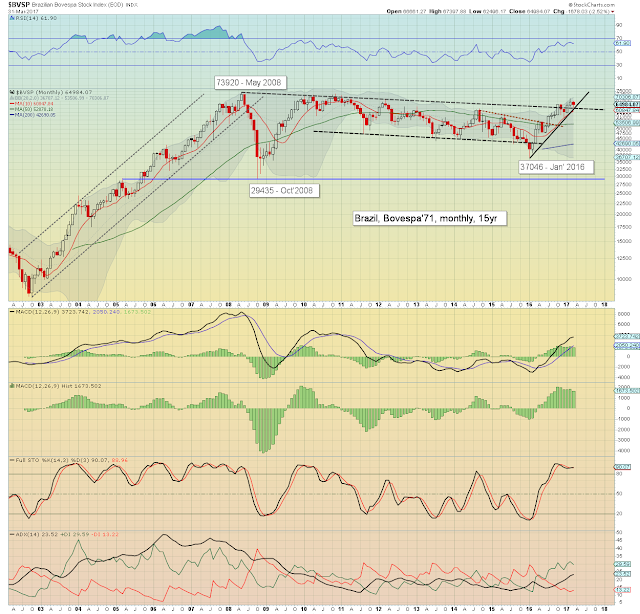 The Brazilian market struggled in March, settling -1678pts (2.5%) to 64984. It could be argued the low in the 62000s was a back test against old resistance... now support. For bullish confirmation, we will need to see new highs >70k. The May 2008 high of 73920 remains a very realistic target by late summer. Price action in commodities will play a key part in whether the current bullish run continues. Keep in mind that the Brazilian market has climbed 27938pts since Jan'2016.. that is a monstrous gain of 75%. 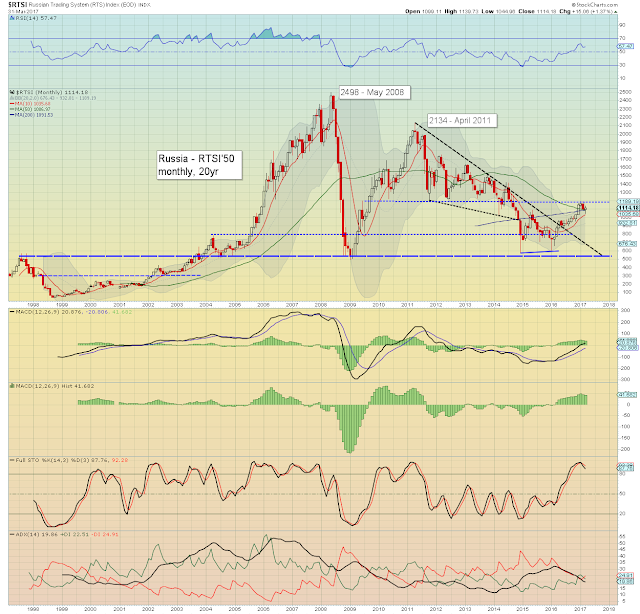 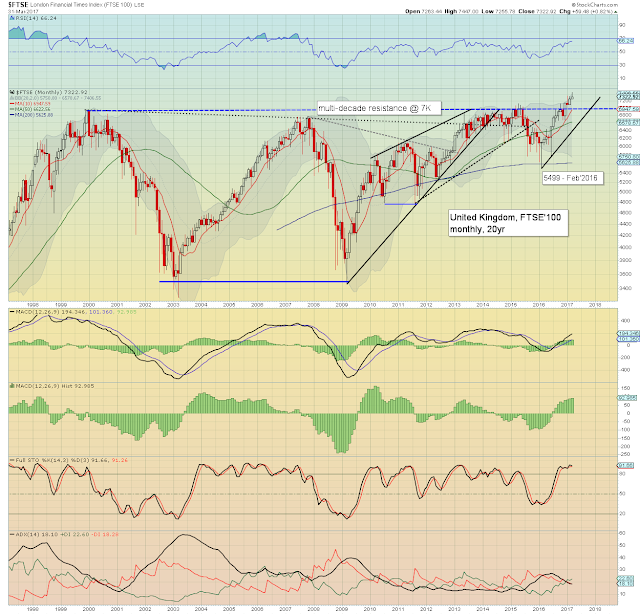 The UK equity market continues to hold above the giant 7k threshold, settling +59pts (0.8%) to 7322. The monthly candle was a little spiky on the upper side, but the bulls have a clear 4% of downside buffer before the 7k threshold is in danger of being lost. Considering price action/structure in other markets, the 8000s look an easy target, with the 9000s just about in range by year end. 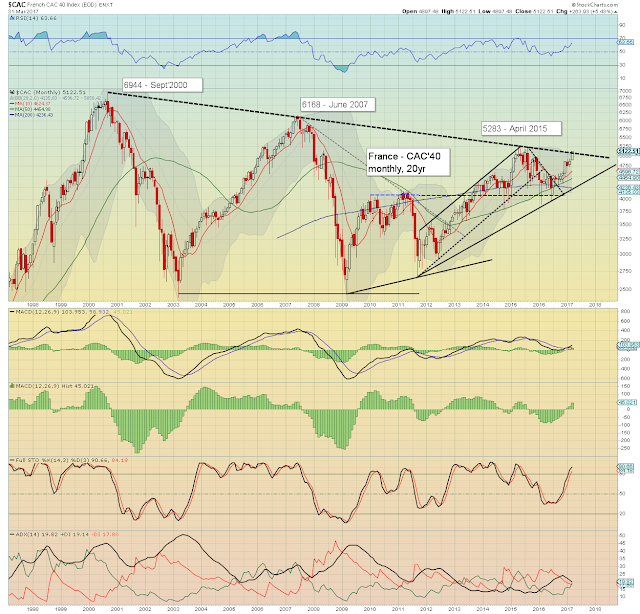 The French equity market has achieved a provisional breakout of declining trend/resistance that stretches back SEVENTEEN years, settling +263pts (5.4%) to 5122. The April 2015 high of 5283 is on the menu for the spring/early summer.

Clearly, the French Presidential election will be a market mover in April/May, however, the technical breakout is crystal clear. The CAC has a viable challenge to the historic high of 6944.. which is another 35% higher. The Spanish market soared in March, settling higher by an extremely powerful 907pts (9.5%) to 10462, the best level since Dec'2015. Upper monthly bollinger will offer some resistance in the 10500s in April, but the IBEX looks headed for yet another challenge of the 12k threshold before year end. Any break >12k will offer 15/16k. 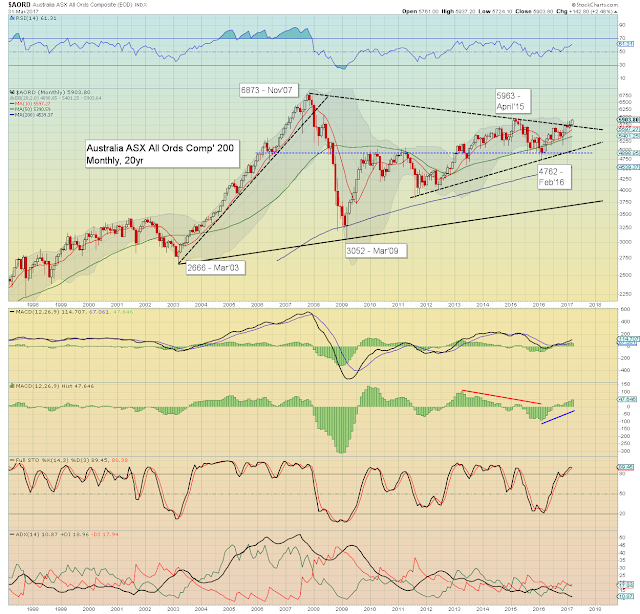 The Australian market climbed for a second consecutive month, settling +142pts (2.5%) to 5903. The monthly close was decisively above declining trend/resistance that stretches back to 2007. First soft target is the April 2015 high of 5963... which looks set to be taken out within the next week or two.

Like Brazil and Russia, the Australian market is particularly affected by commodity prices. If we do see another up wave in commodities, the ASX has a good opportunity to push for a challenge of the 2007 high of 6873.
--

European markets are notably outperforming Asia and the USA.

The monthly closes for the French and Australian market are very bullish indeed.
--

*there are four scheduled appearances from a trio of fed officials, notably Dudley on Monday, primarily dealing with the issues of household borrowing and student debt.
--

If you value my work, you can support me via a monthly subscription, which will give you access to my intraday postings at permabeardoomster.com

*the next post on this page will likely appear Monday at 7pm EST
Posted by Trading Sunset at 17:00:00
Email ThisBlogThis!Share to TwitterShare to FacebookShare to Pinterest 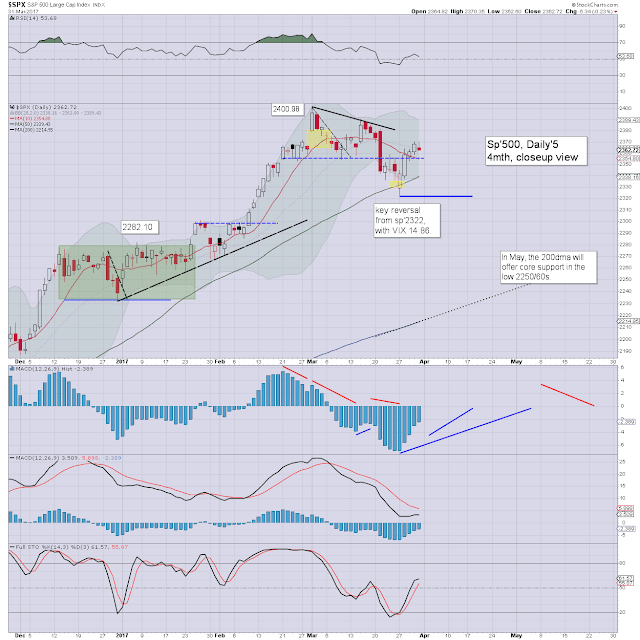 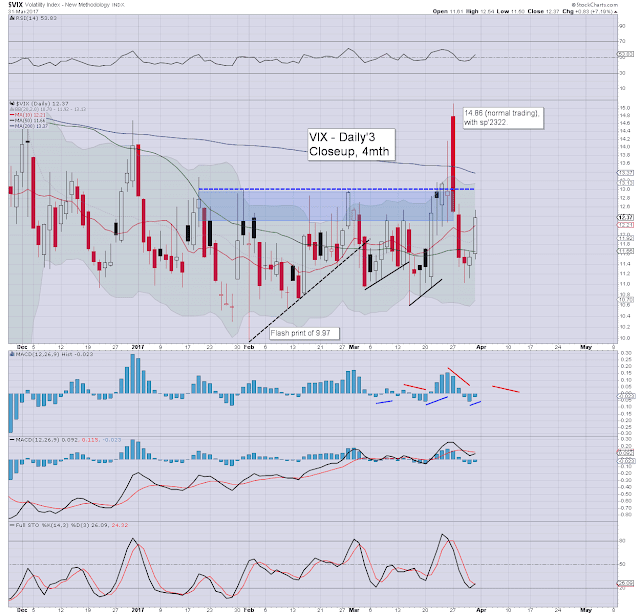 The week/month/quarter ended with (naturally) a fair amount of minor chop. The sp'500 saw a trading range of just 8pts. There is big resistance around 2380/90, but with a very secure low of 2322.

Market volatility climbed into the weekend, but we're still only talking about a VIX in the 12s. It is notable that unlike February, March did see (if briefly) the 14s.

Something I noticed this evening... 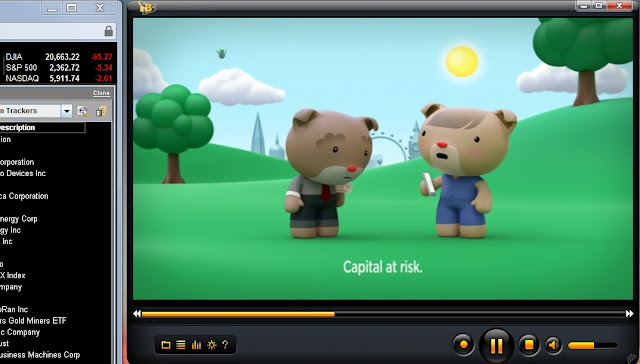 Whomever did the above advert for 'Nutmeg' (a UK financial promoting retail equity investments) was a clear fan of the talking bears that were a thing a few years ago.

*the weekend post will appear Sat'12pm EST, and will detail the World monthly indexes. It remains my most important post of the month.
Posted by Trading Sunset at 00:00:00
Email ThisBlogThis!Share to TwitterShare to FacebookShare to Pinterest
Newer Posts Older Posts Home
Subscribe to: Posts (Atom)