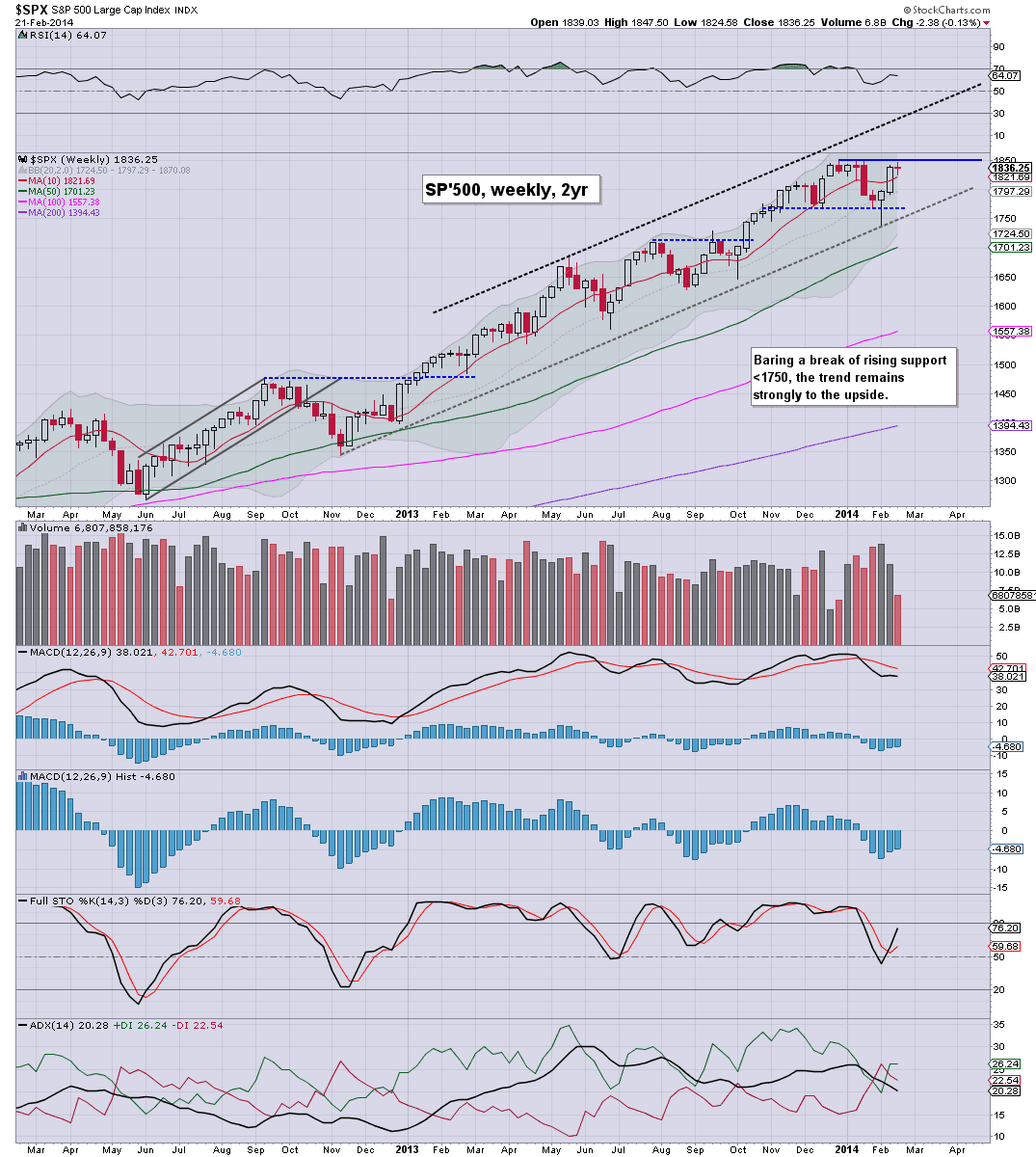 The sp' was fractionally lower on the week, but importantly, did manage to put in a second weekly close above the 10MA - now at 1821. The lower bol' is set to jump to the 1740s at the start of next week, and any hope of breaking the recent 1737 low is no longer viable.

Indeed, even if we put in a key peak around the time of the next FOMC, I do not expect the market to have any chance of breaking <1700 in the first main wave lower. 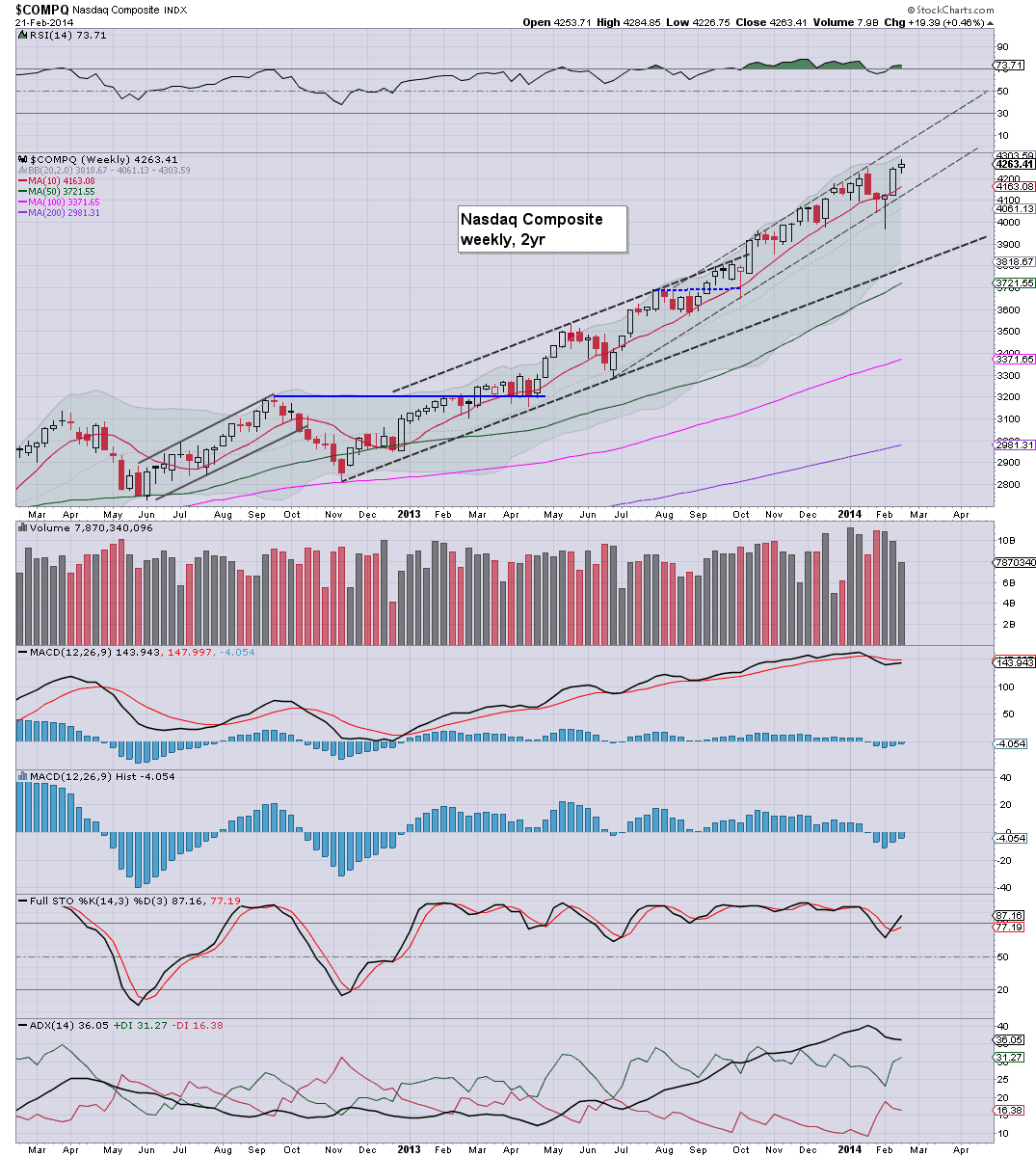 The tech' saw moderate gains of almost 0.5% this week, the third consecutive weekly gain. Most notable, the Nasdaq has already broken a new post 2009 high, and looks set for the 4300/4400s in March. 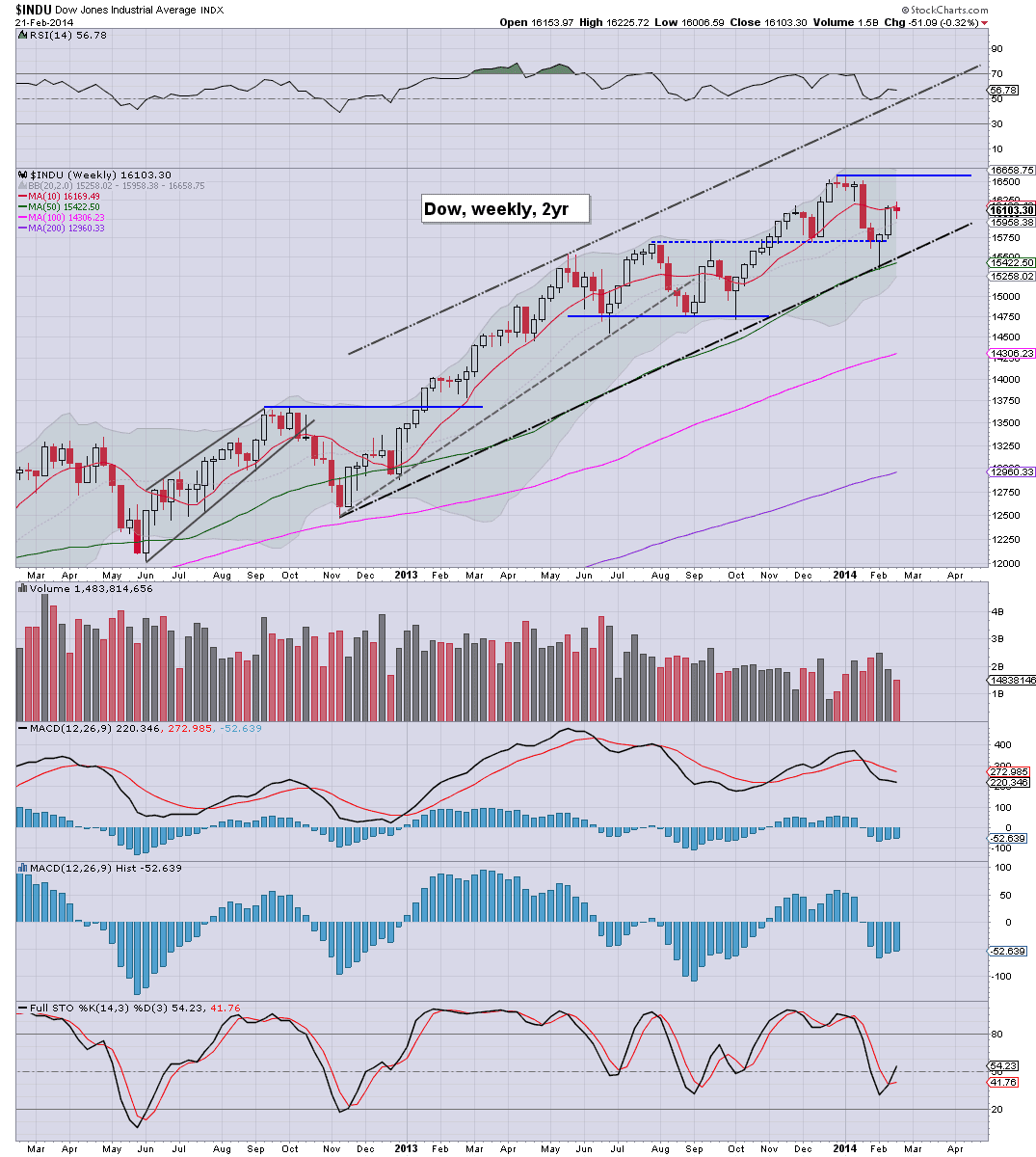 The mighty Dow slipped a little, with a net weekly loss of 0.3%. The weekly candle is a somewhat indecisive doji candle. Underlying momentum remains negative, and there is a somewhat clear H/S scenario viable - which also applies to most of the other indexes.

There is key rising support in the 15500s, whilst the upper bollinger is offering upside to the 16600/700s in early March. 17k looks to be an increasingly 'difficult' target in March. 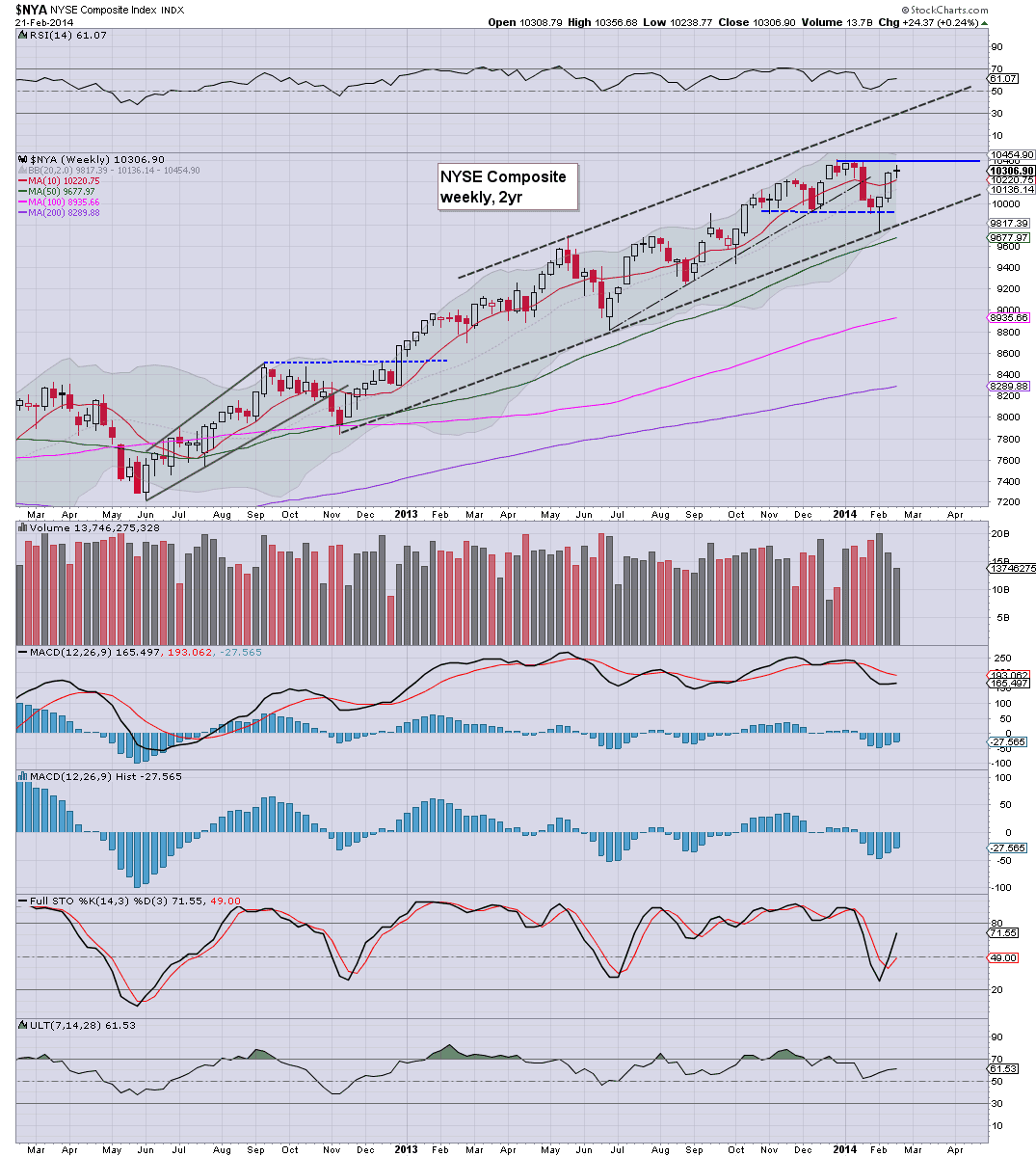 The master index saw a minor gain of 0.2%, and this was the third consecutive weekly gain. Underlying momentum is still negative, but we're set to go positive MACD (blue bar histogram) cycle in the first week of March. 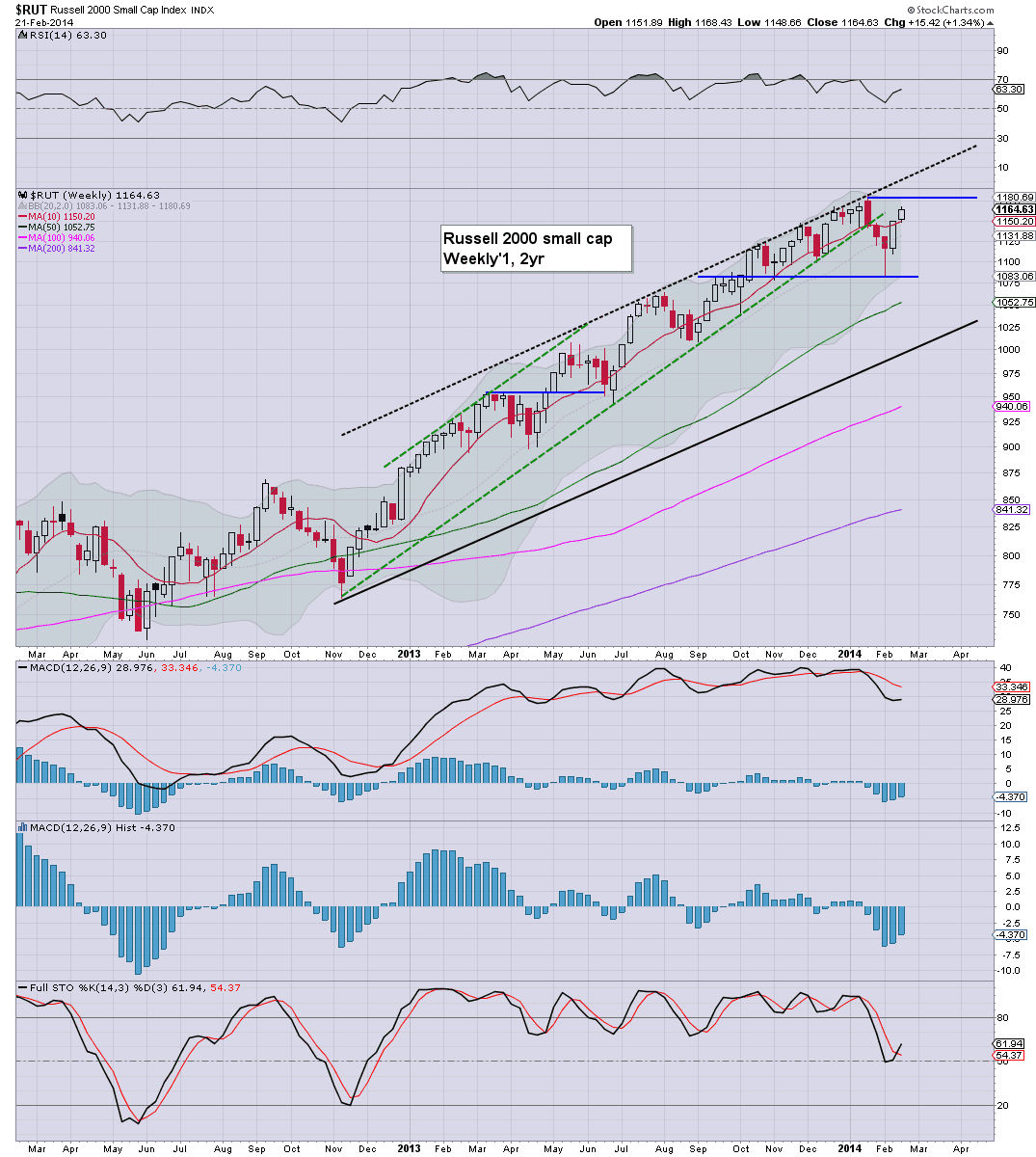 The second market leader was the strongest index this week, with somewhat sig' gains of 1.3%. We're set to break into the 1200s in March.  The 1300s do not look possible until late 2014 - assuming a major summer retracement back to the low 1000s. 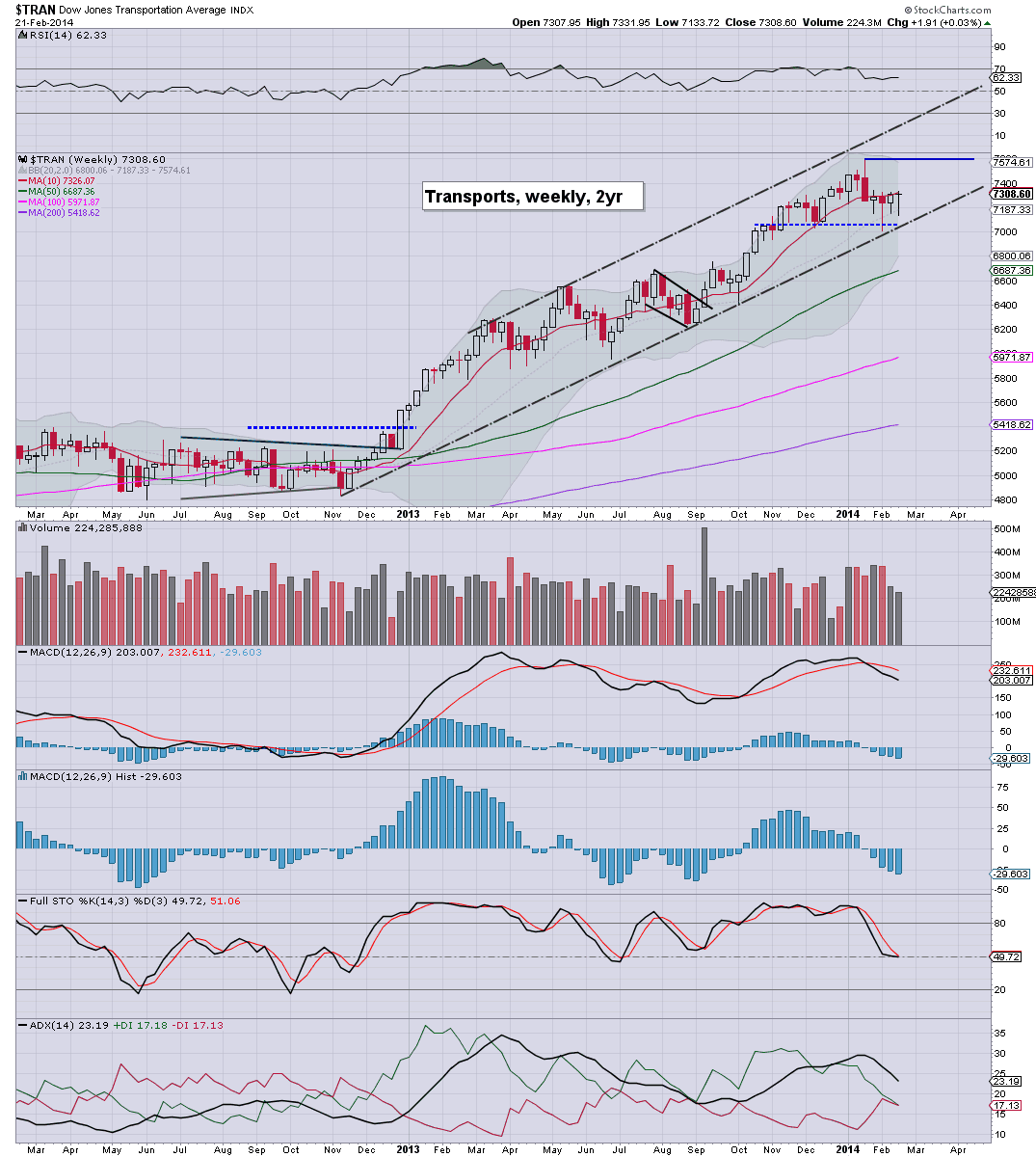 The old leader only managed an essentially flat close this week. However, after the two day decline of Tue/Wed, the tranny closed the week arguably strong. The weekly candle was the fourth consecutive candle with a spike-floor. This certainly bodes more to the upside, as we move into March.

So, it was a bit of a mixed week in market land. Certainly, the bears have again failed to knock the market significantly lower, and with the Nasdaq breaking new highs, and the two leaders - Trans/R2K, both looking set to break new highs in March, the outlook has to remain bullish.

There are a few bits and pieces due in the coming week. The first major data points are case-shiller HPI and consumer confidence on Tuesday. Thursday will see Durable Goods Orders and weekly jobs data.

Yellen is due to speak to the Senate on Thursday (having been recently postponed). That will no doubt get major attention, and if last time is any clue, Yellen might be talking for 4-6 hours.

Not long to go now

Chart sp'weekly'8 has been (disturbingly) correct since last summer. 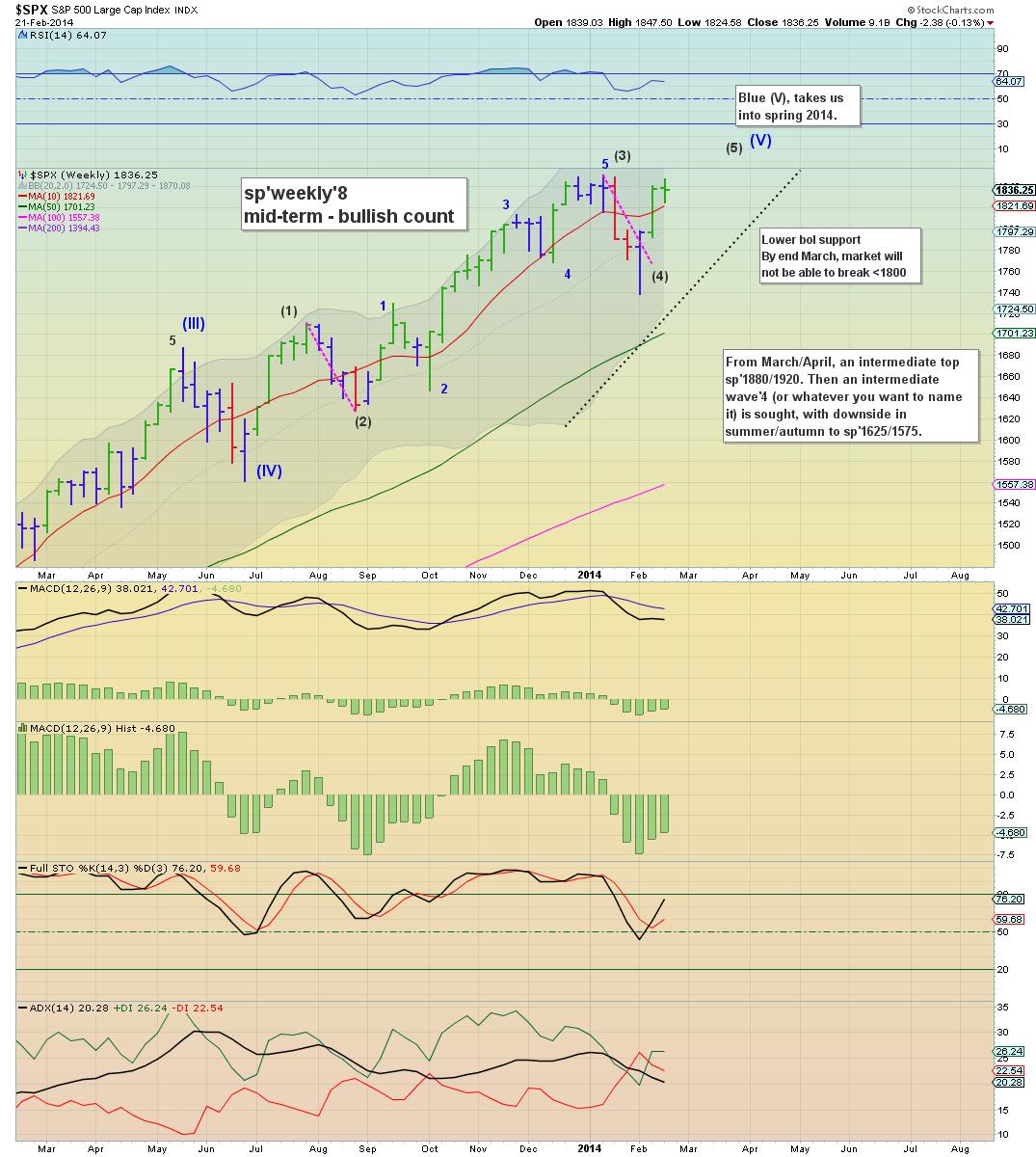 I am very much looking forward to seeing whether we do indeed put in a key intermediate'3 top this spring. From there, equity bears should have their first opportunity - since summer 2011, to smack this market lower, at least by 10%, if not double. However, regardless of any summer/autumn declines, I still expect much higher levels in 2015

A second year is now complete for this little corner of the financial blogosphere.

4921 posts across two years (on this blog, not counting the other three!)...and I'm still going.

I will again note my thanks to two of the leading chart linking sites...

Were it not for those two sites, I'd not have kept this going, especially in those first few months.

There are other sites of course, and I appreciate all those who have commented in the past two years, whether via disqus or email.
-- 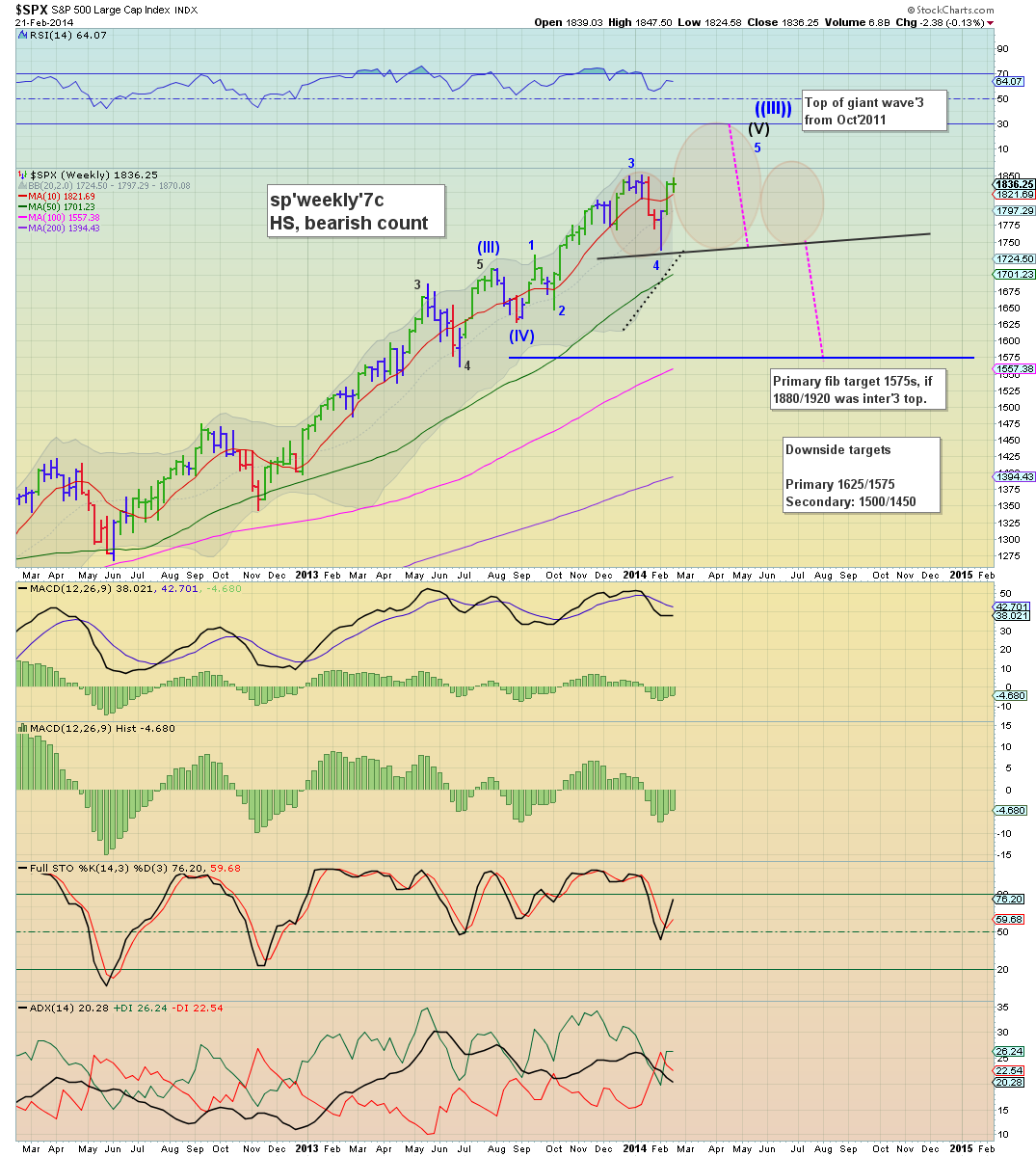 This remains a particularly attractive scenario for the spring. Could it really be this? Certainly, there is an opportunity, with QE-taper'3 seemingly coming at the FOMC of March'19, and then taper'4...(FOMC of April'30).

That would make for a pretty exciting few months, and should equate to a VIX at least in the 30s.
---


As for the 'True Permabear'

It relates to a TV series I have been watching this week. It is probably one of the best mini-series I've ever seen. If you like a slow and moody show in the late evening, with quality story telling, then go seek out 'True Detective' (HBO network). I should also note, 'Black Sails' (Starz network) is pretty good too, if pirates be your thing...arrrr!

Goodnight from London
-
*The weekend post will be on the US weekly indexes
Posted by Trading Sunset at 04:00:00
Email ThisBlogThis!Share to TwitterShare to FacebookShare to Pinterest 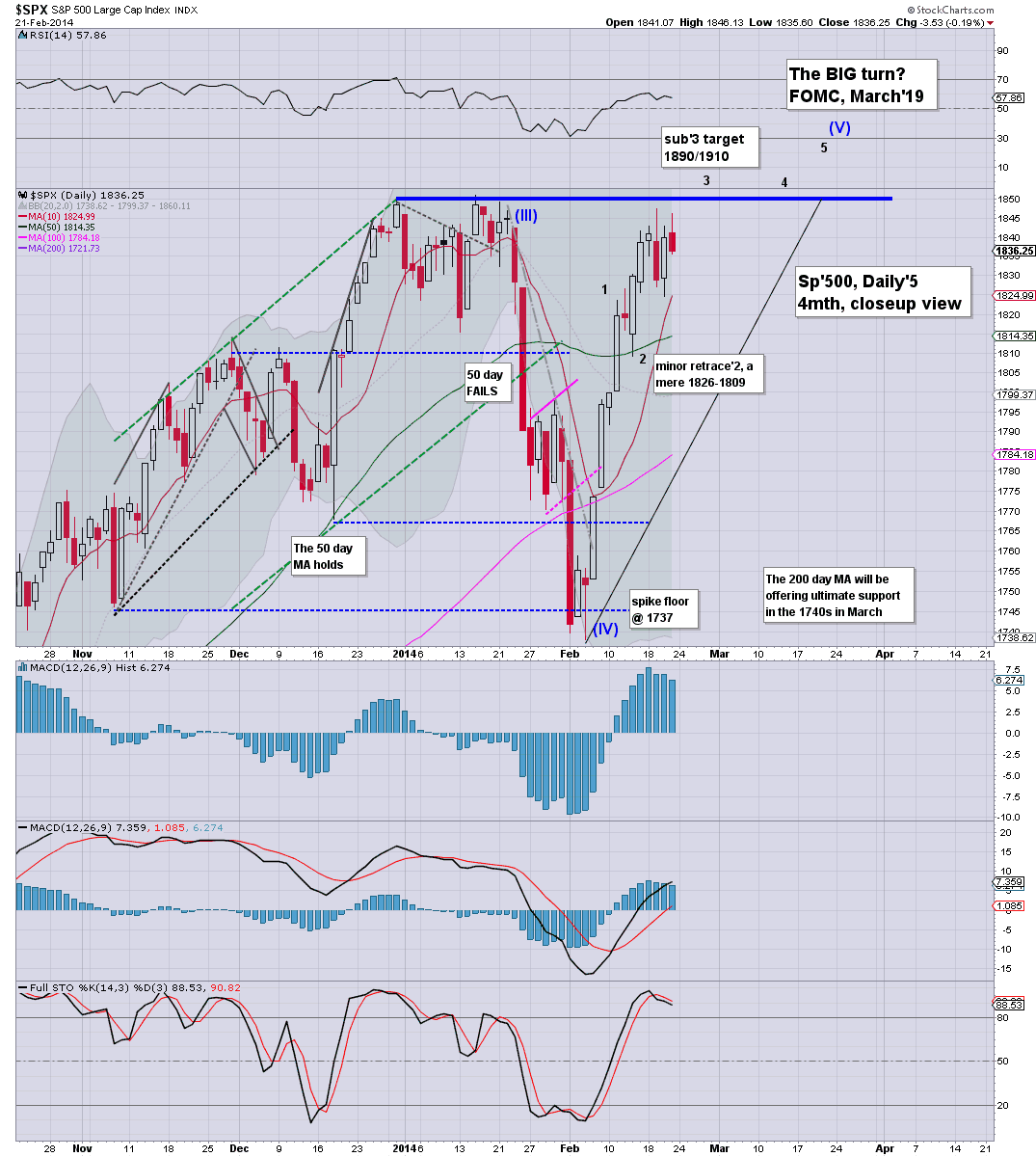 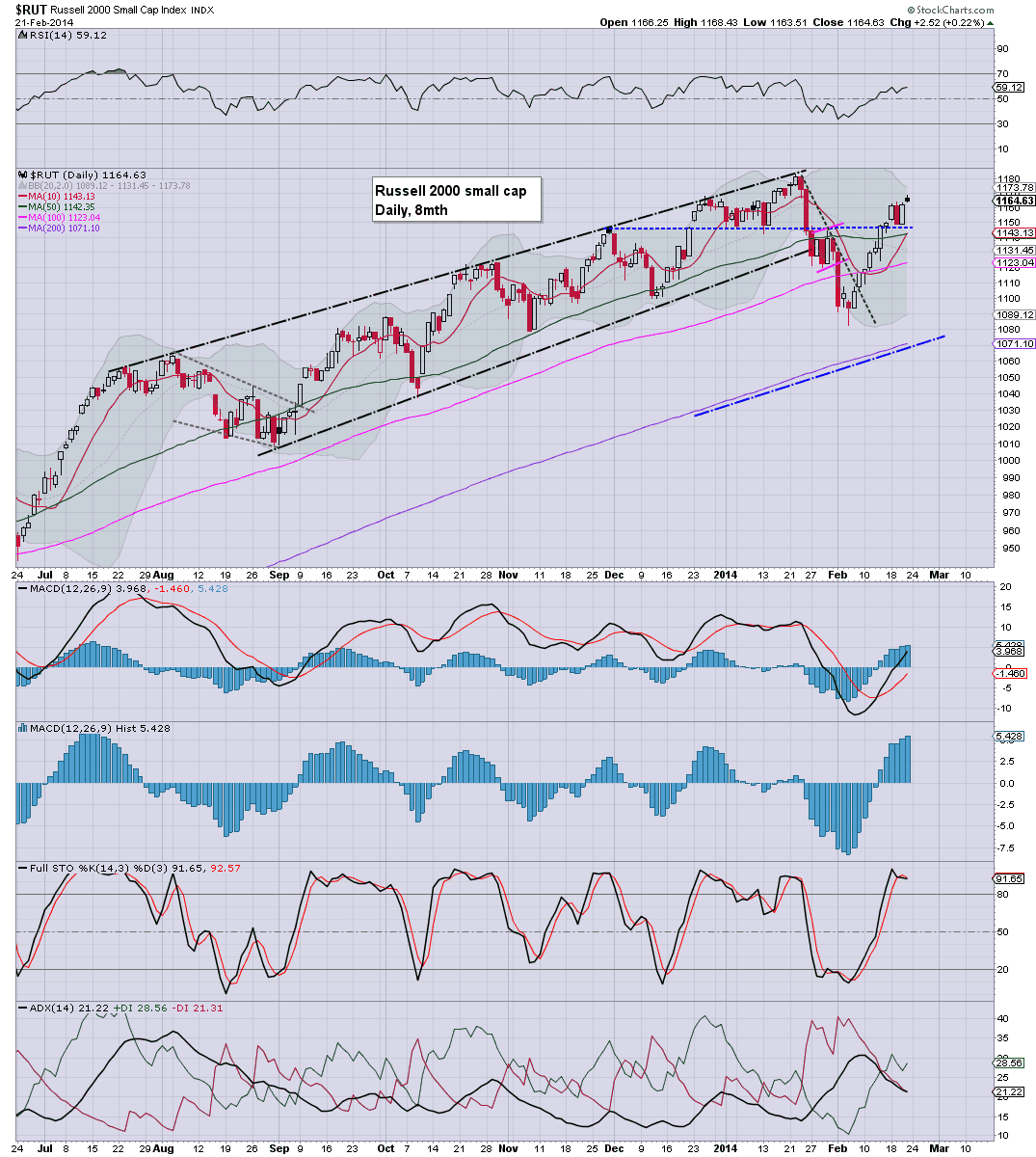 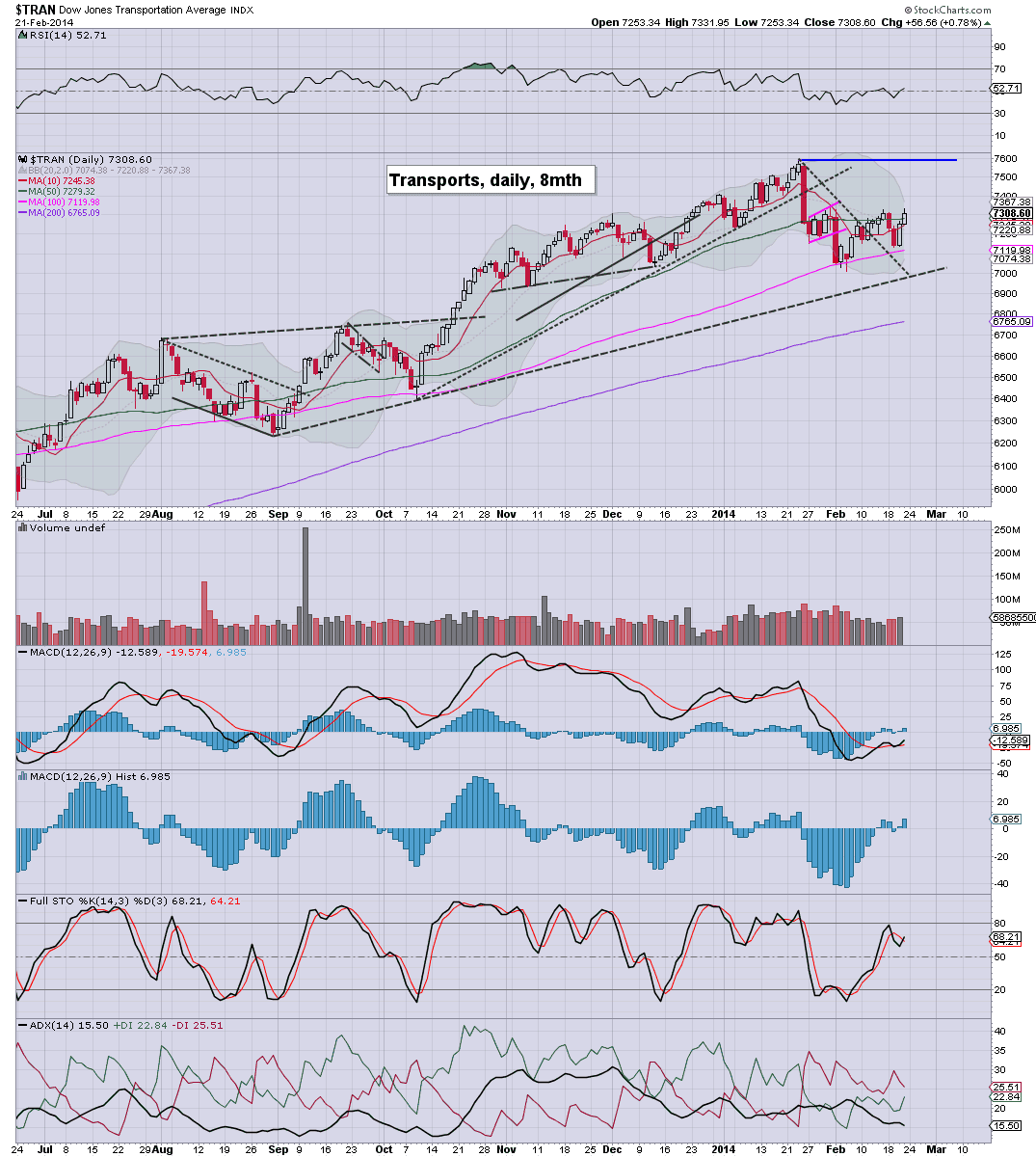 With the bigger weekly/monthly charts still broadly bullish, there looks to be at least a further few more weeks to the upside.
--

a little more later..on what is another milestone for yours truly..
Posted by Trading Sunset at 01:00:00
Email ThisBlogThis!Share to TwitterShare to FacebookShare to Pinterest
Newer Posts Older Posts Home
Subscribe to: Posts (Atom)