Most world equity indexes continue their broad climb from summer 2012. With the DAX set to hit 10k, and the Dow clawing its way toward 17k, equity bulls remain in control. There remains 'moderate' chance of a multi-month wave lower later this summer/early Autumn. 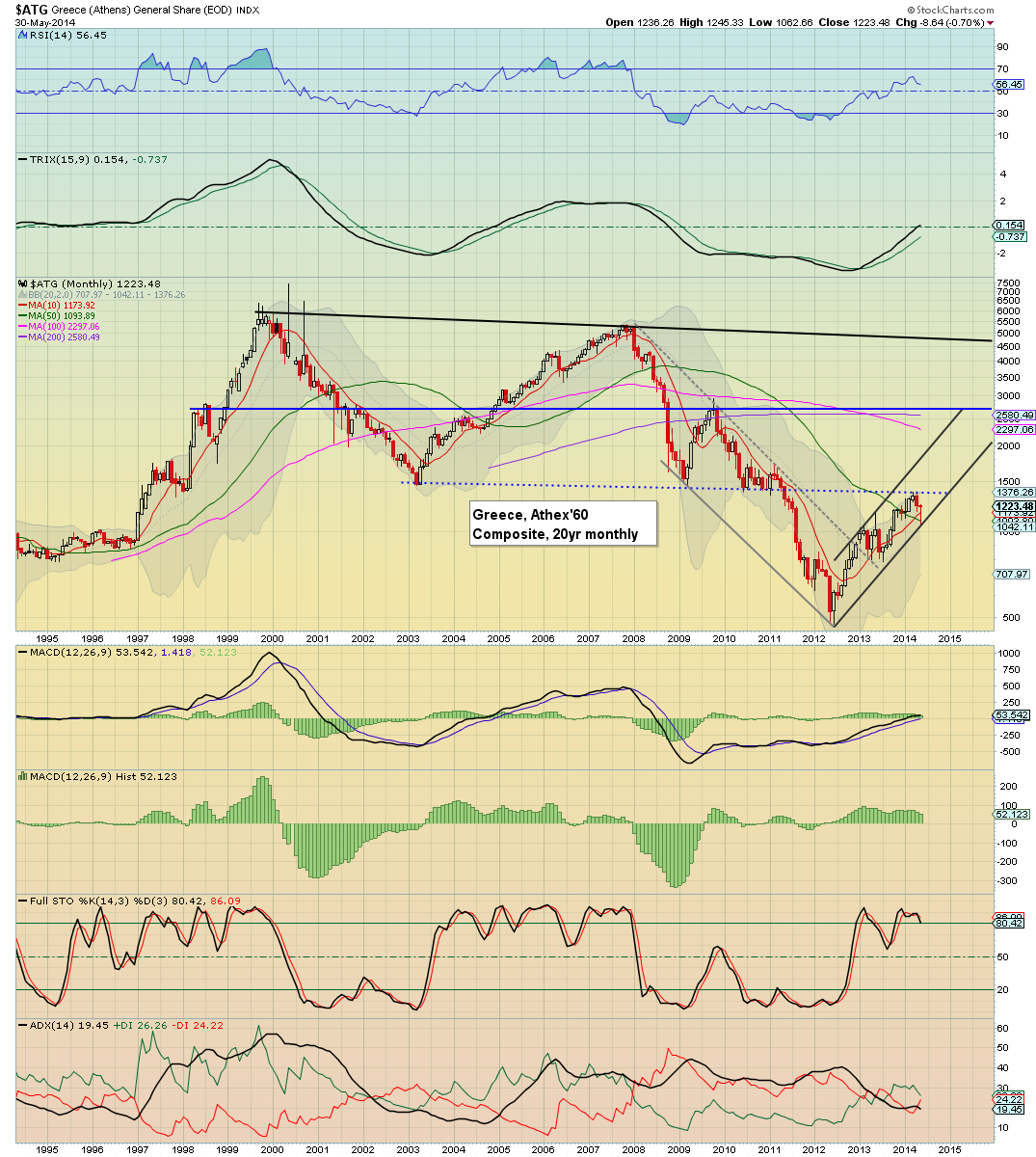 The Greek market closed fractionally lower for May, but well above the intra-month low of 1062. There remains opportunity for another lurch higher to the big 1500 threshold, and that is a clear 20% higher. 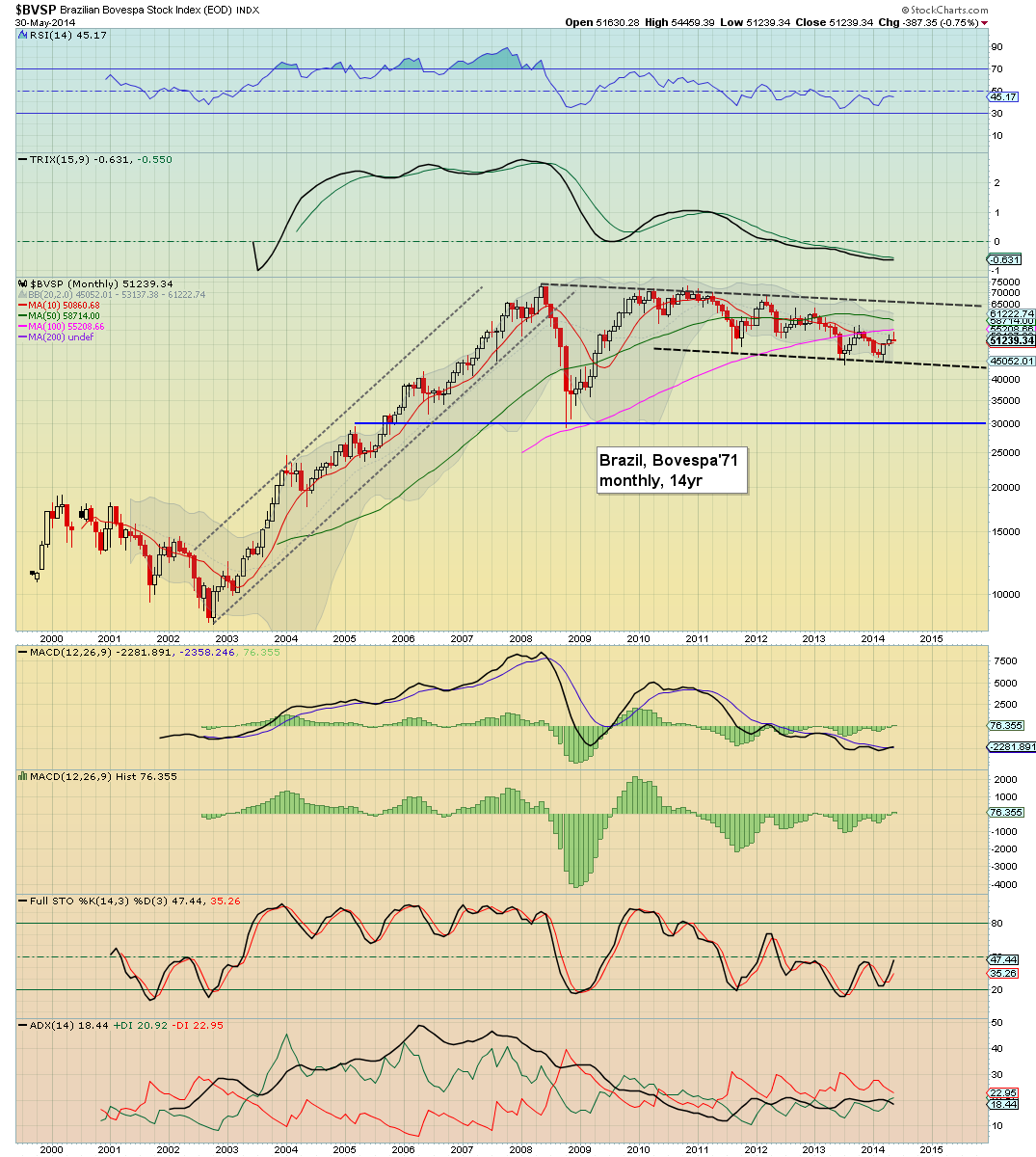 The Bovespa slipped -0.75% in May, but underlying MACD cycle is continuing to swing towards the bulls. The closing monthly candle is a touch bearish, but equity bears really need <45k to have any confidence in this market. Best case upside is around 60k this summer, and that is around 15% higher. 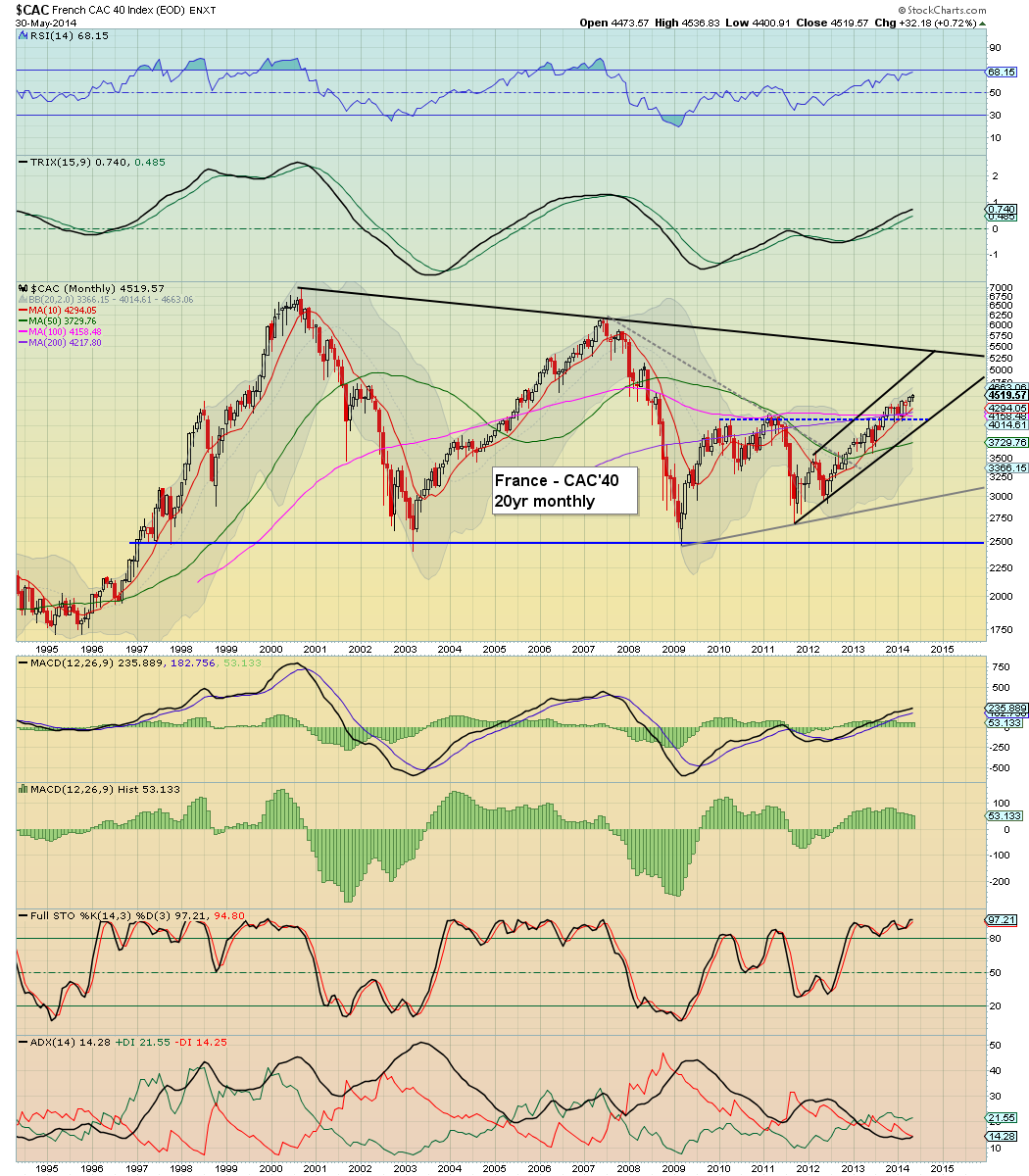 The CAC managed a minor gain of 0.7% for May, but it was the third monthly gain so far this year. The big 5000 threshold remains just over 10% higher, but looks somewhat unlikely until the very end of the year - and that would require an absence of any summer weakness. 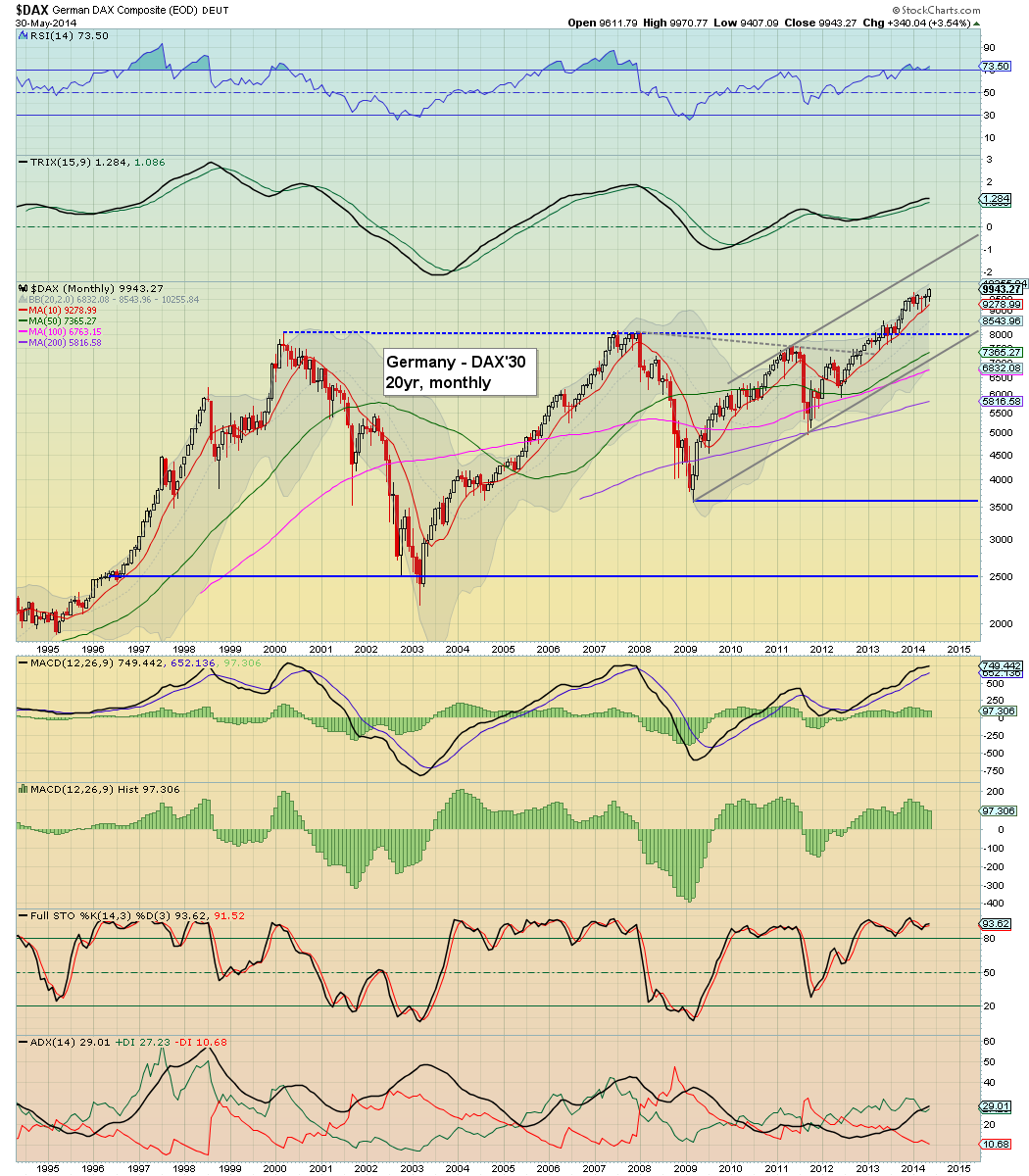 The powerhouse of the EU gained a very impressive 3.5%, and is now a mere 0.6% away from attaining the giant psy' level of 10000. Based on May price action, the 10k level will be hit early next week. Upper bollinger band will be offering the 10300/400s in June. 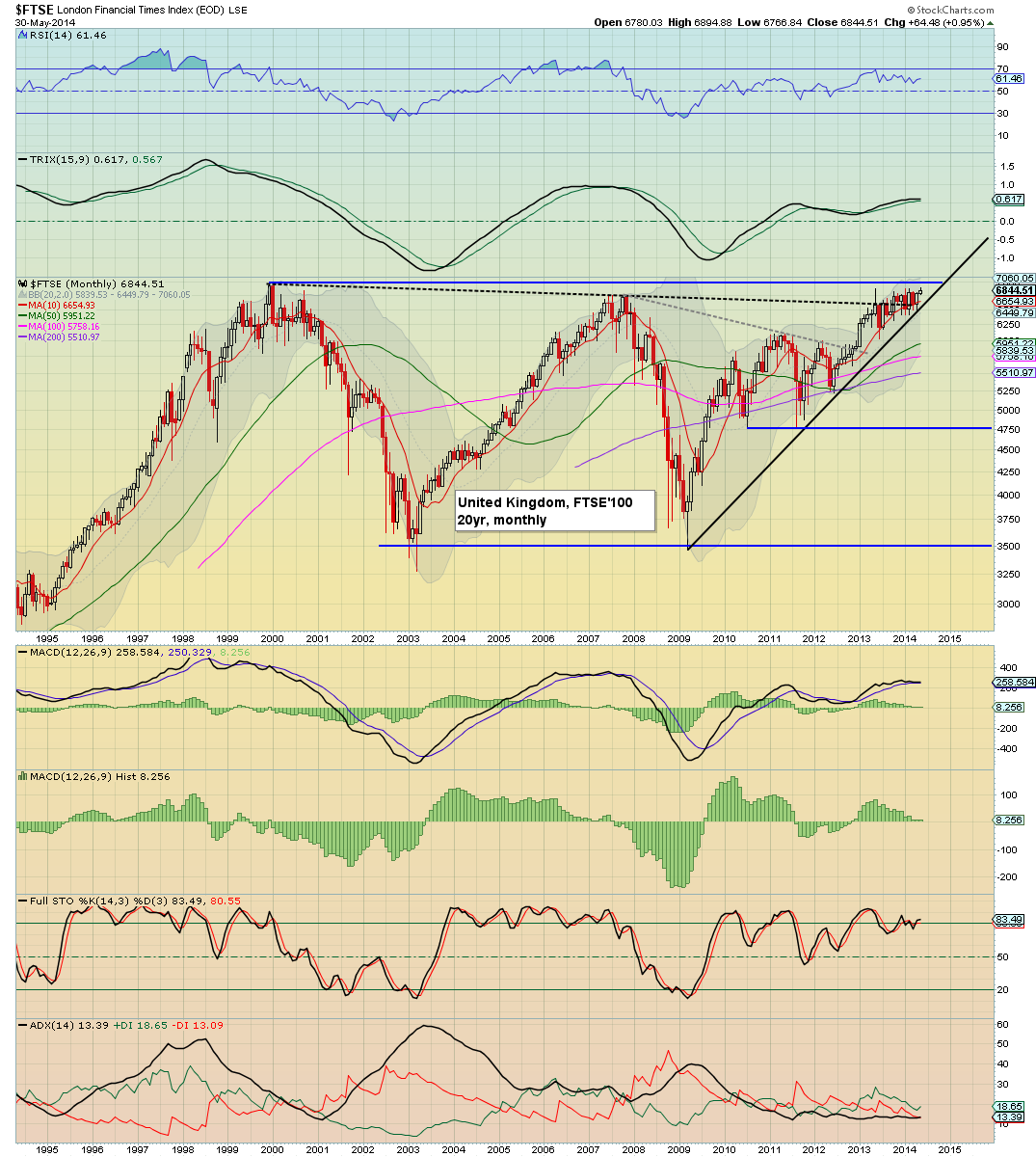 The FTSE gained almost 1%, and is now less than 2% from breaking the historic high of 6950 (of Dec'1999). Price momentum is very weak though, and MACD (green bar histogram) could turn negative in the immediate term. Price structure is also somewhat bearish, the UK market looks.. tired. First support is 6500, if that fails, then 6k. 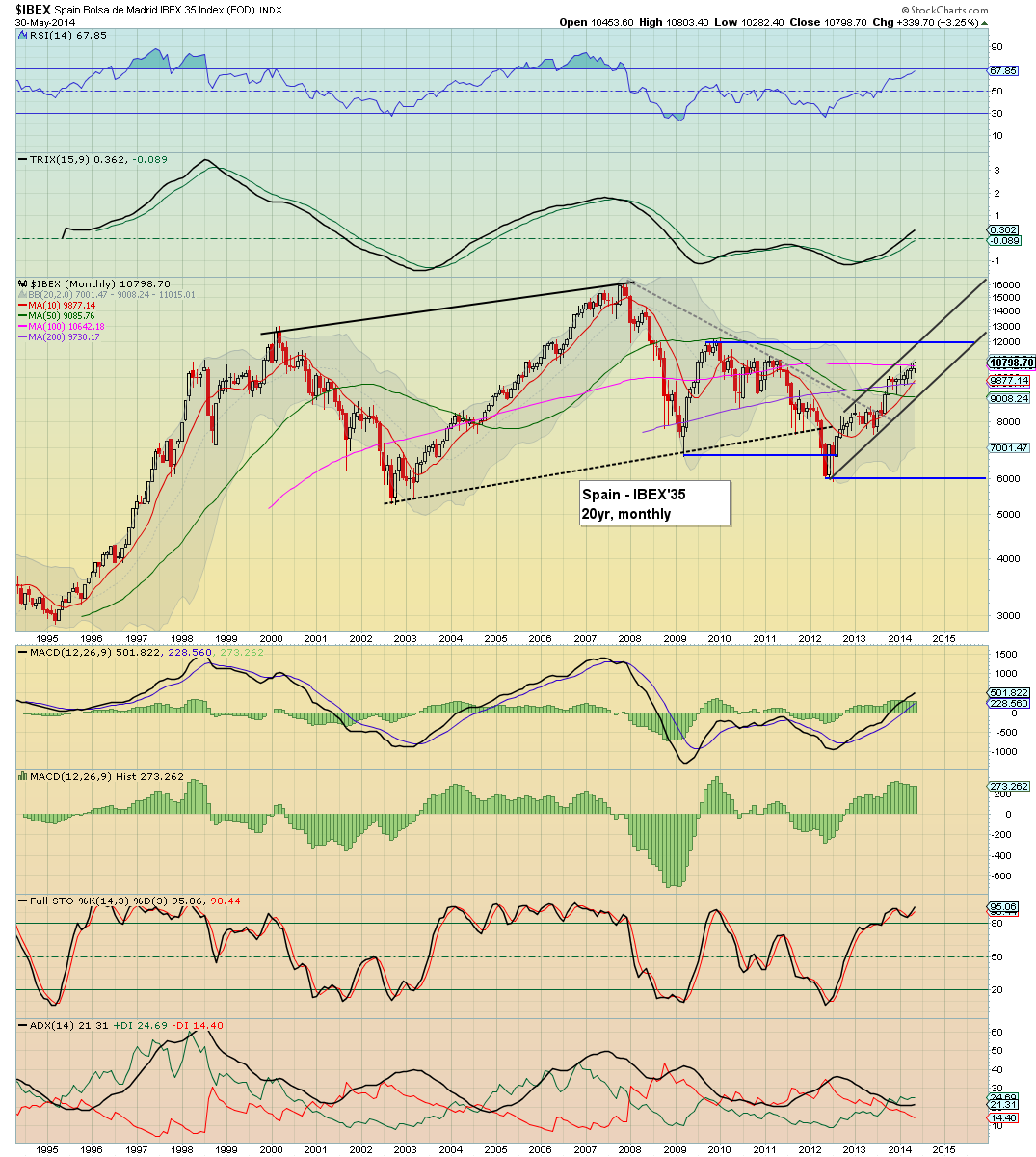 The ugliest of the EU PIIGS, the Spanish market gained a significant 3.2% in May, and looks set for 11k.. if not 12k by July. What happens in the 11-12k zone though will be interesting. Viable downside - on a market break, would be the 10k level. If major market upset (geo political issues?), then 8k would seem to be the very best the bears could aim for. 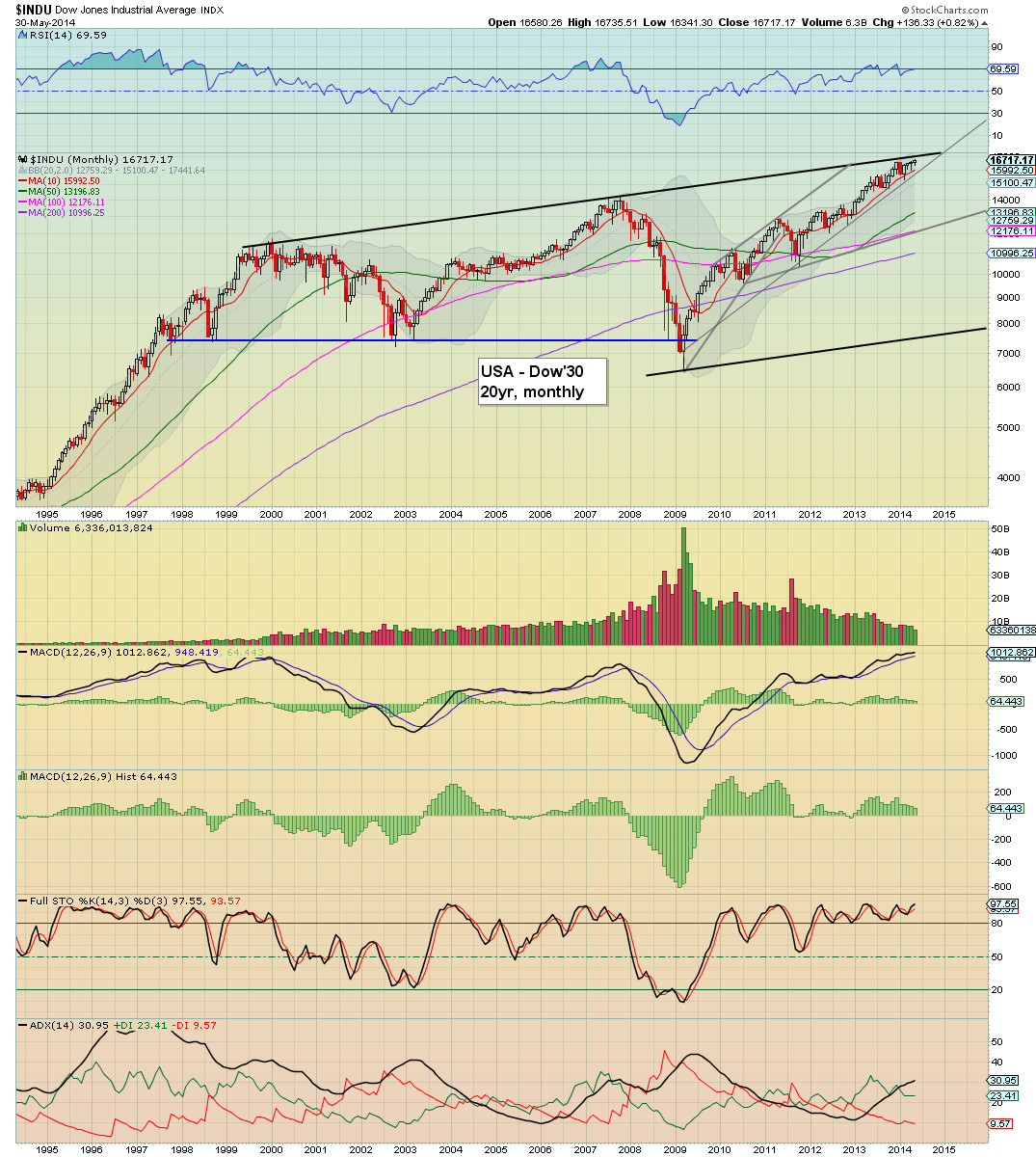 The mighty Dow climbed just 0.8% in May, and the trading range for the month was itself very narrow. A new high of 16735 was achieved, with the 17000s looking viable in mid June...if not July.

Like the UK FTSE though, price momentum continues to swing back toward neutral, and there is high opportunity for the MACD cycle to turn negative in June. If the US/world indexes do break lower this summer/early Autumn, best downside case is probably no lower than 14000. 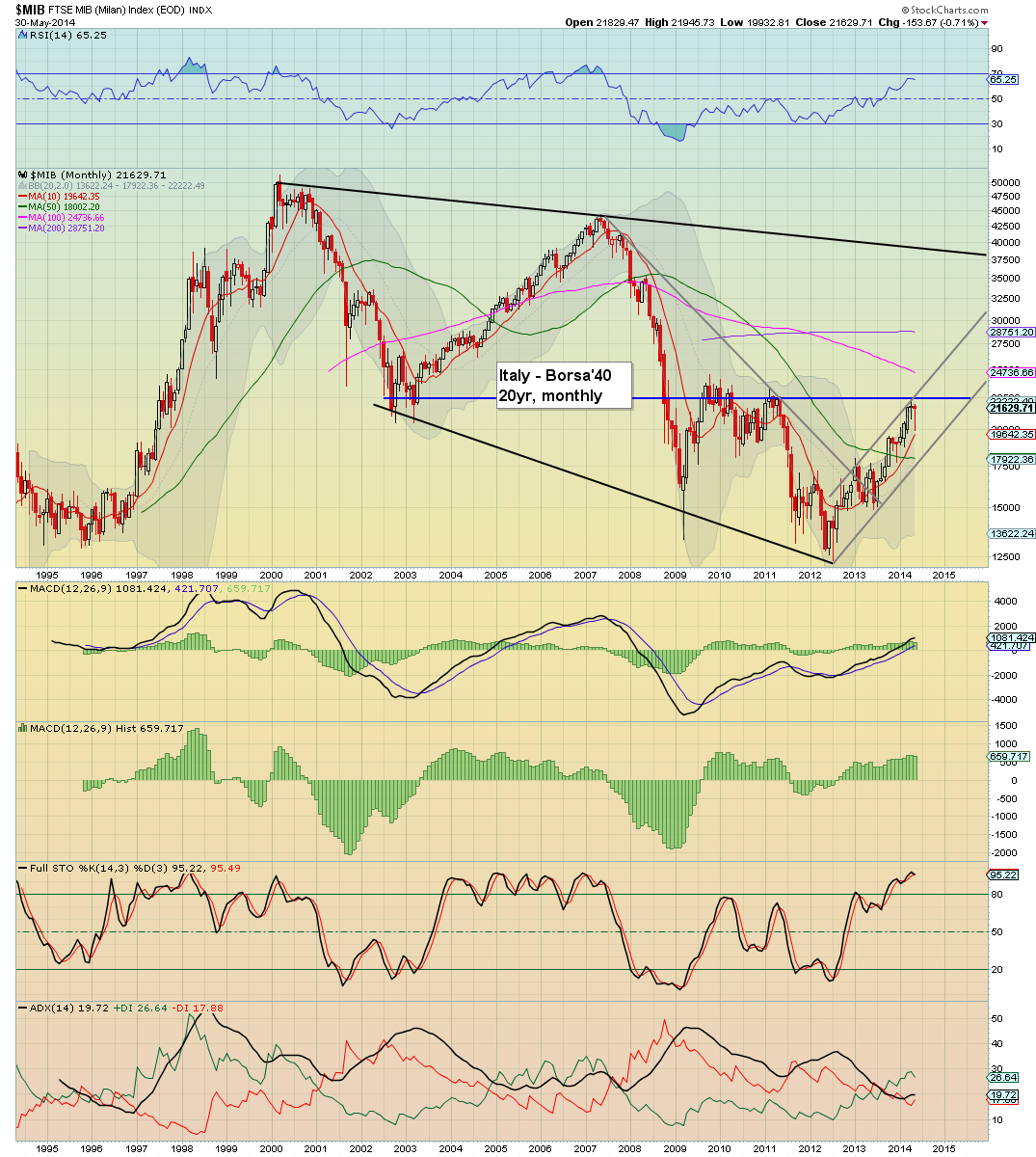 The Italian market slipped 0.7% in May, but the closing spike-floor candle is somewhat bullish. There remains very strong resistance in the 22000s, and if this index remains stuck <22k across June/July..it could bode for a mid-term top. Primary downside would be in the 17000s, but that is 'best bear case'. 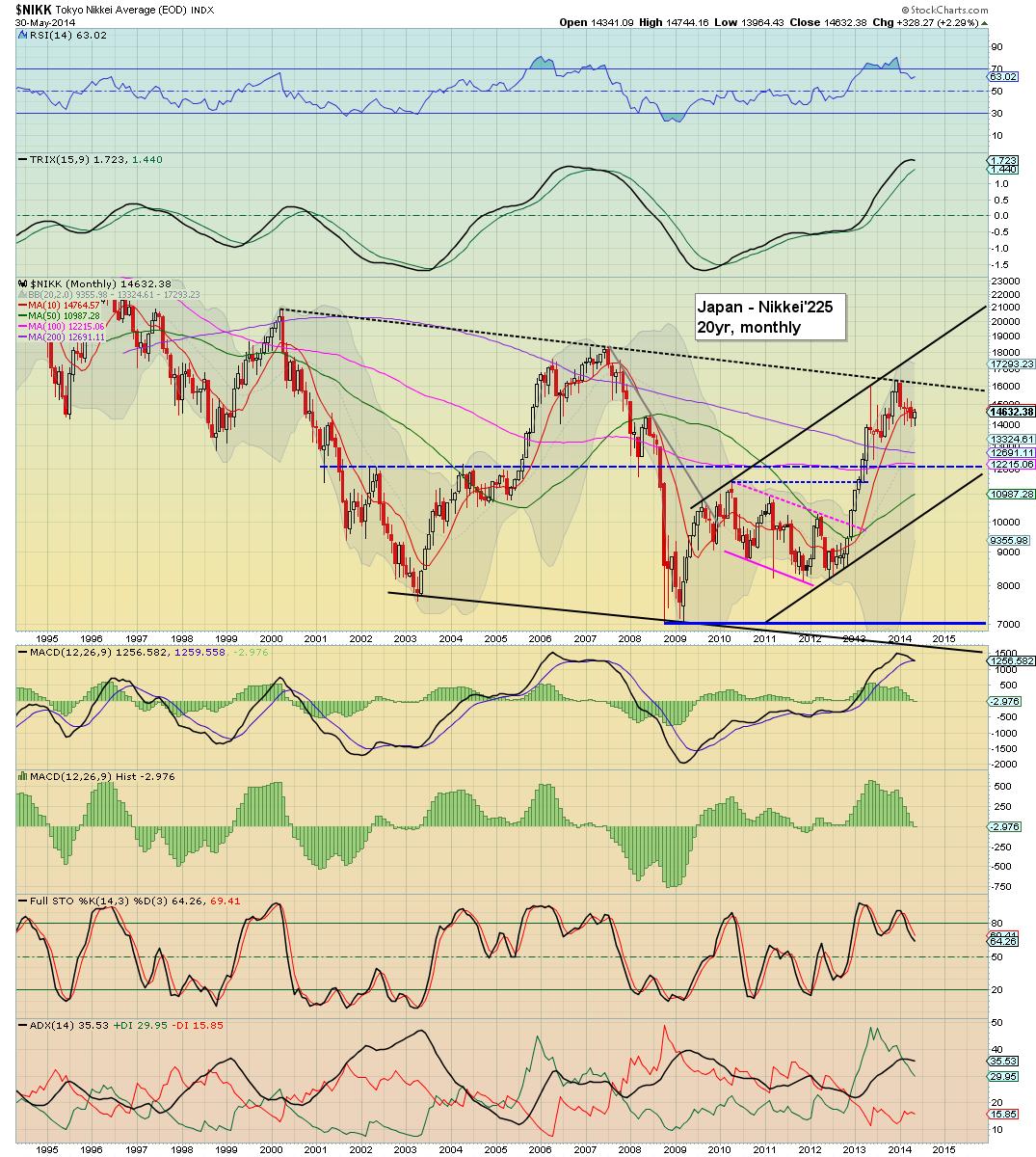 The Nikkei gained a useful 2.3% in May, but remains below the key 15k threshold..which is obvious resistance that stretches back into the 1990s. Underlying MACD cycle turned negative in May, and we have a bearish cross.

Without question, the Japanese market is one of the more bearish world markets, and this is somewhat ironic considering the continued huge monetary pump from the JCB. Best bearish case downside this summer/autumn would be the 11000/10000 zone. Sub 10k looks overly difficult, not least since the JCB will be more than content to increase QE..as necessary. 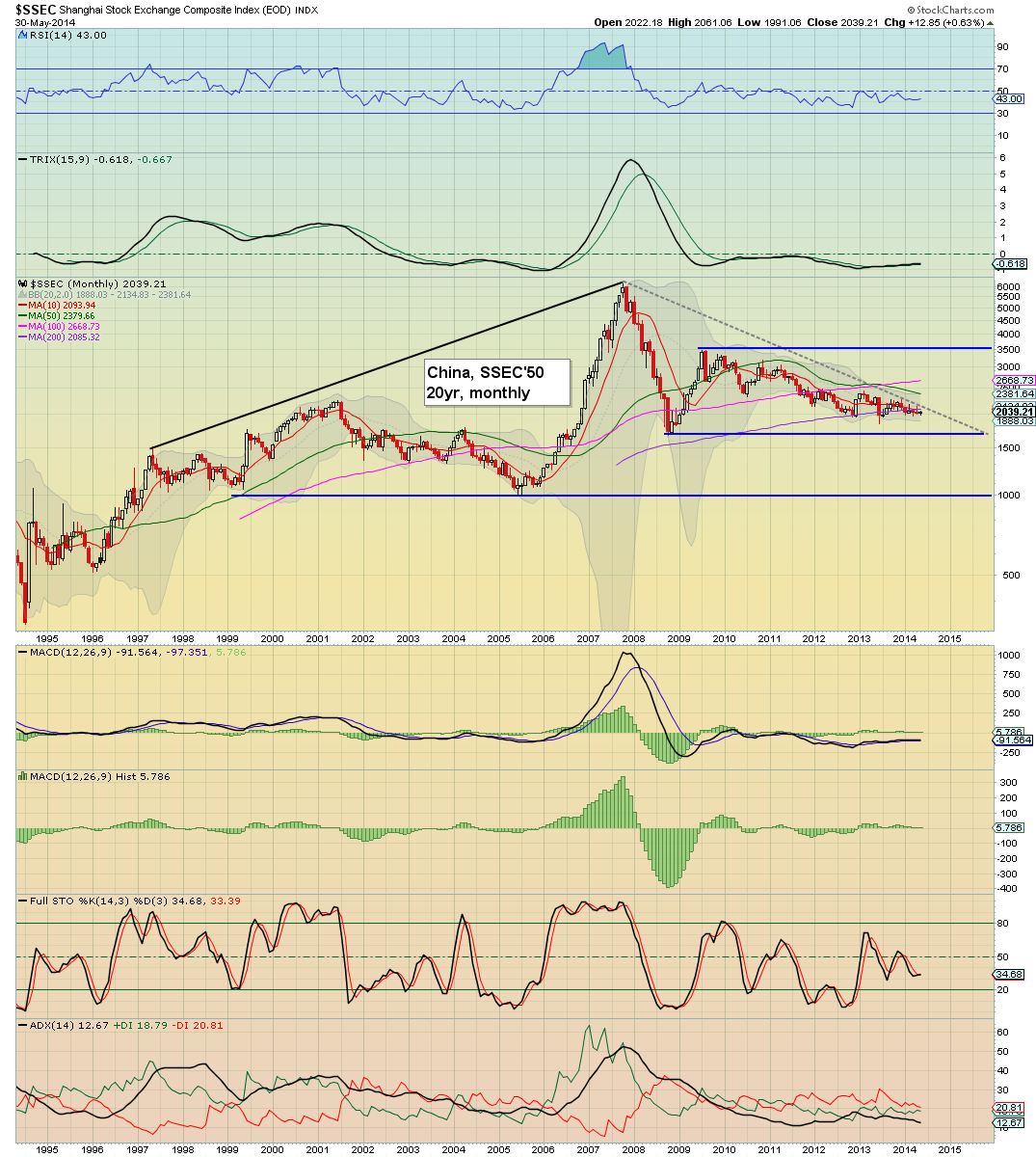 The China market gained 0.6% in May, but price action remains relatively muted, within a very tight trading range that is now over two years in duration. The fact the Shanghai comp' was again trading <2k this past month is not entirely bullish.

As a collective, the world equity market continues to climb. No doubt, a great reason for this rally is the continued printing from the various central banks, along with low interest rates. Certainly, parts of the world economy are growing relatively fine, but as US Q1 GDP data just recently showed, despite continued (if diminishing) QE, the US economy is currently contracting.

The ECB are understandably concerned about underlying deflationary pressures, and many now accept negative interest rate policy (NIRP) is a likely outcome. Overall, there is a risk of at least a moderate recession already underway.

There are quite a few things next week.

Thursday will see an ECB announcement. Market is expecting at least a reduction in interest rates, although some are hoping for a QE program - I do not expect the latter. How the market deals with 'lower rates, but no QE' is difficult to say.

The week concludes with the monthly jobs data, market will probably rally on any number higher than 180/200k.


On the sidelines for another week?

I didn't take any trades in the past week, and I'm not particularly interested in anything this coming week. I am real tired of this market, and in many ways, I could do with a few months just avoiding it entirely. As some of you might understand (if not also experiencing yourself), I'm burnt out on this.

...and maybe that itself, is an uber-contrarian sell signal,

The sp'500 is now 849pts higher since the Oct'2011 low, that makes for a gain of 79% across just 32 months. It still seems fair to assume that at some point this year, the monthly cycles are going to break lower (if only for a few months), but from there...further 'moon madness' upside. 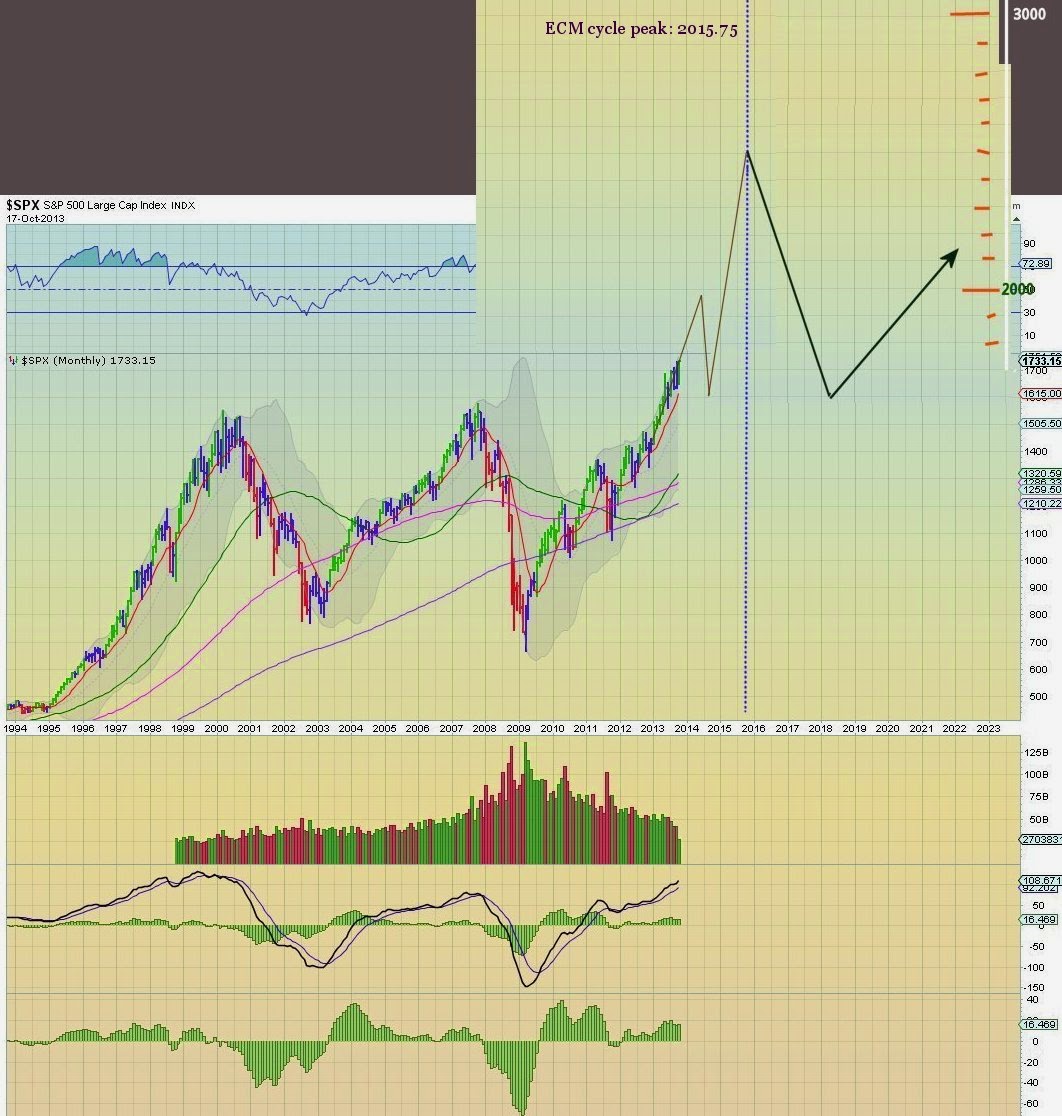 *The ECM cycle (from Armstrong) is highlighted in late 2015.

Now, I'd certainly not get fixated about a particular day..or even month. I'm seeking a 'grand multi year peak' sometime in late 2015/early 2016 time frame.

In the last ECM cycle, the equity market peaked six months after the ECM peaked...so maybe we are looking at spring 2016 before the current paper bubble catches fire?

--
Regardless, the point about the above scenario, is that with the break above the 2000/2007 high last year, I became resigned to much higher levels. The break of the multi year double top was a very significant technical achievement for the market, and yet, I still think many are not taking that aspect at all seriously.


Outlook for the next year or two? 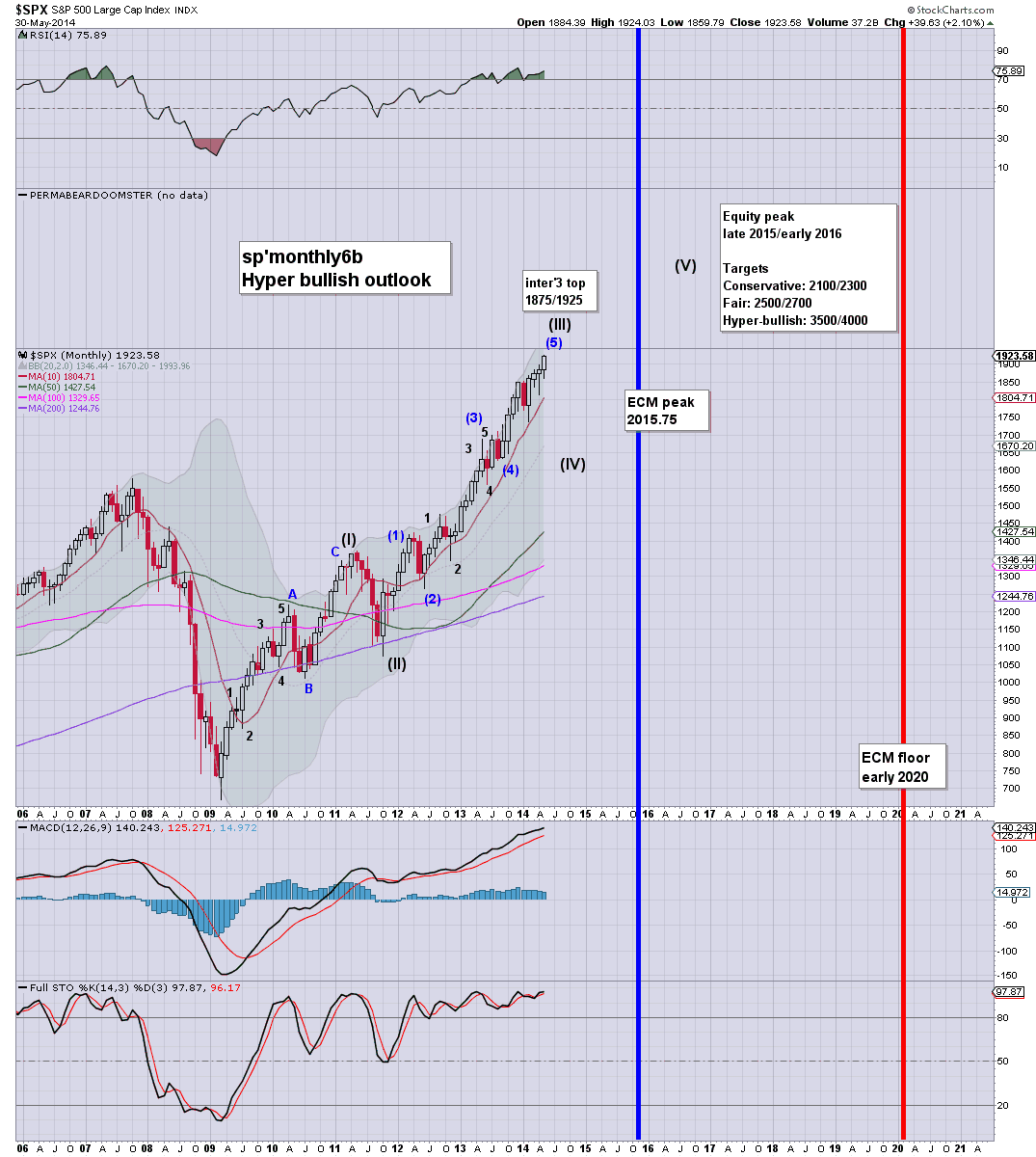 The included wave count is of course entirely speculative, but regardless of how you want to count it (if at all)..the broader trend remains to the upside.

So, I am still holding to the vain hope of a significant retracement this summer/early Autumn. Yet.. in the bigger picture, I think this market is headed to far higher levels. There are many reasons for this, not least of which is central bank ZIRP policy and the huge amount of money printing.

..and that will suffice for today, the week...and the month.

Goodnight from London
-
*the weekend update will be on the World monthly indexes
Posted by Trading Sunset at 04:00:00
Email ThisBlogThis!Share to TwitterShare to FacebookShare to Pinterest 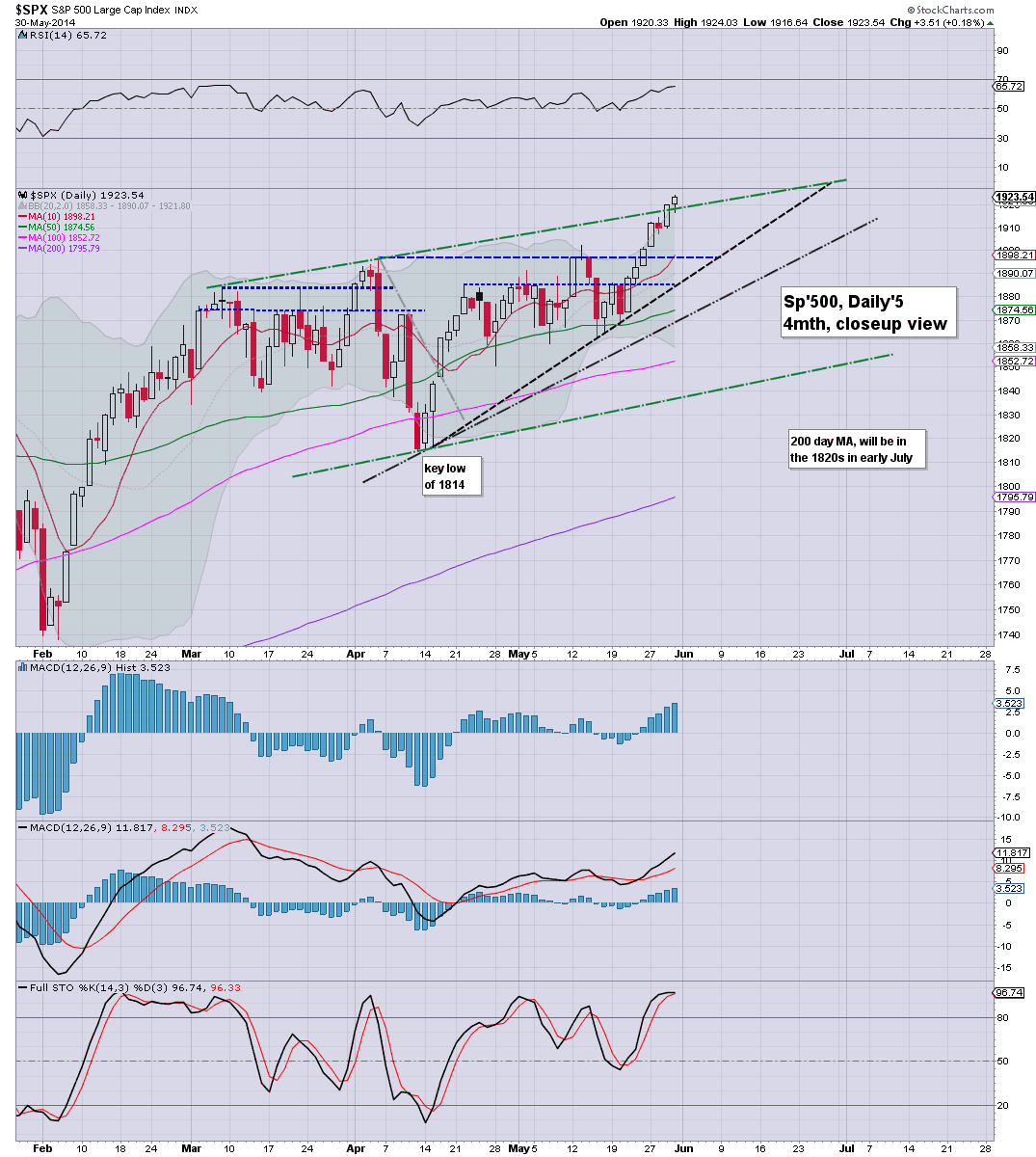 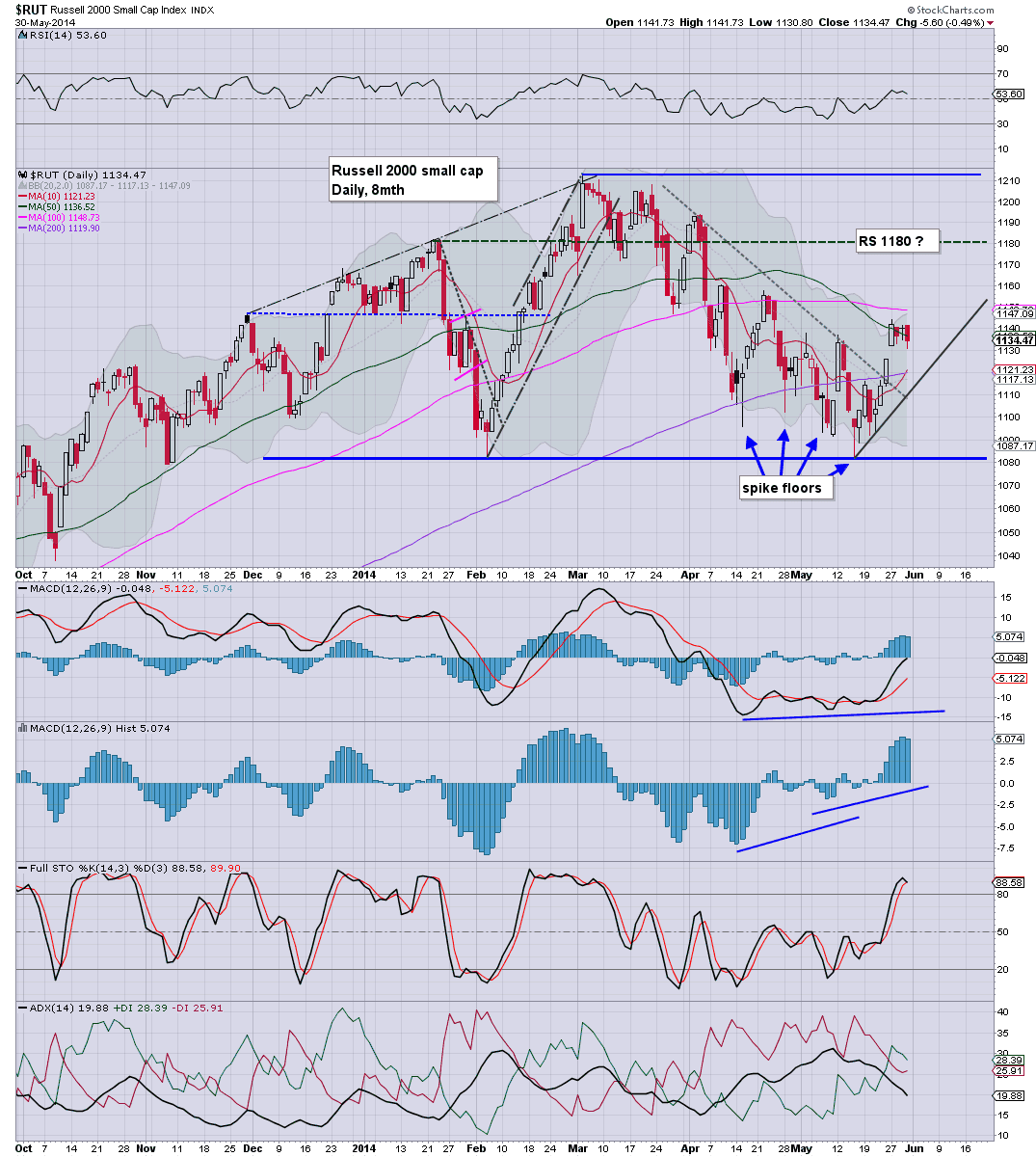 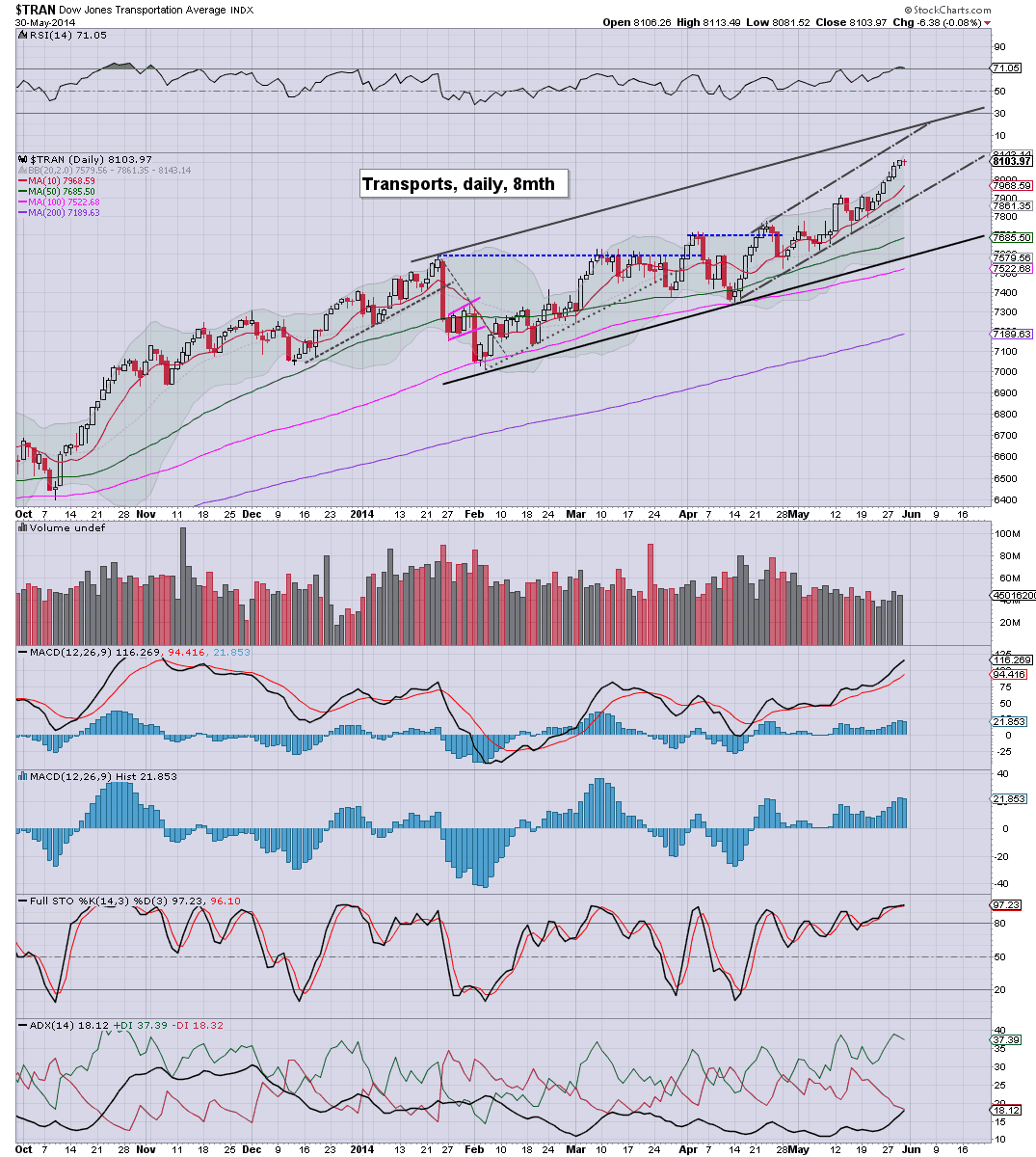 Unquestionably..with new historic highs for the Trans/SP - with Dow set to follow, the broader market is indeed back on the climb.

The Feb' low of sp'1814 is now a clear 100pts lower, and with VIX 10s likely next week, this remains a market of utter complacency. Such calm won't last forever though.