Unlike Tuesday, the US equity market failed to see a latter day rally, and that allowed the VIX to build very strong gains, settling +24.4% @ 18.53. There looks to be high probability of a test of the 20 threshold. Best 'fair case' for the equity bears...VIX 22, with sp'1980. 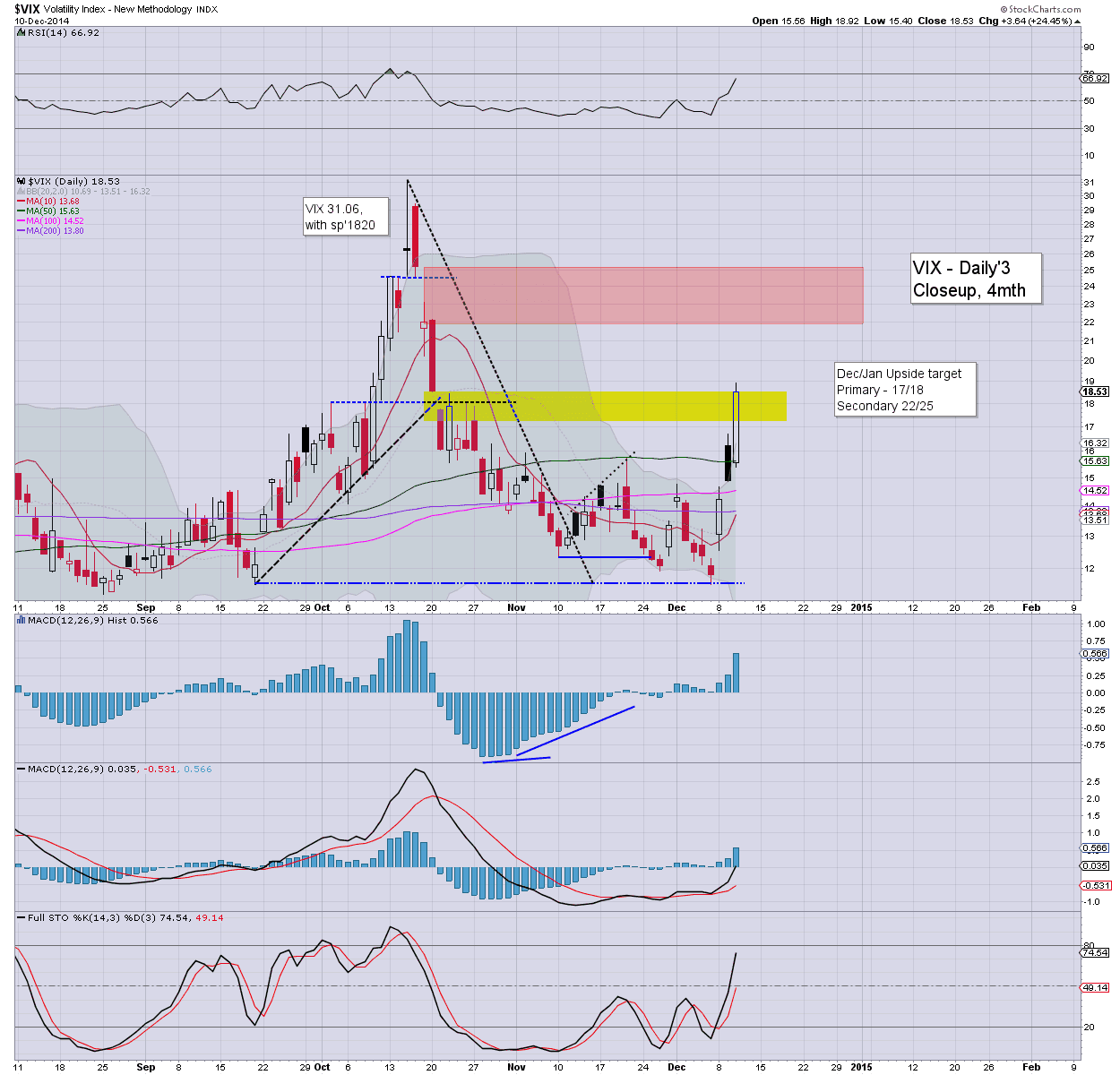 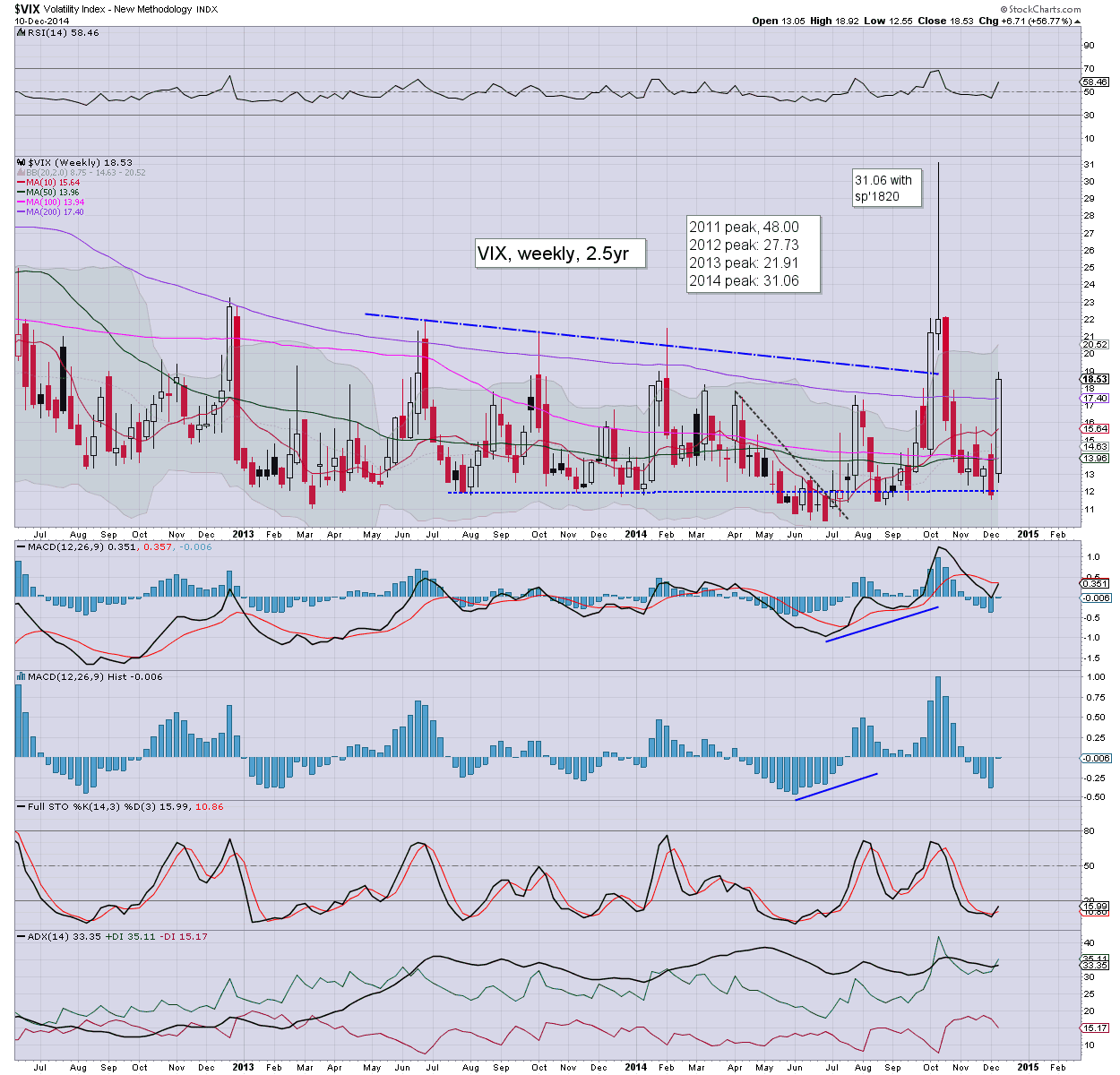 *a very notable third consecutive daily gain for the VIX
--

So.. we've hit the first target zone of 17/18s, and today's daily close in the mid 18s does keep open a 'small' chance of the secondary zone of 22/25 being hit. That latter zone is a very clear price gap from the turn in mid October.
-

VIX bulls need to be very mindful of next weeks FOMC. Whether the VIX is 20, 21, 22.. or even a little higher, what is clear, the appearance of the Yellen will very likely mark a key turn.
- 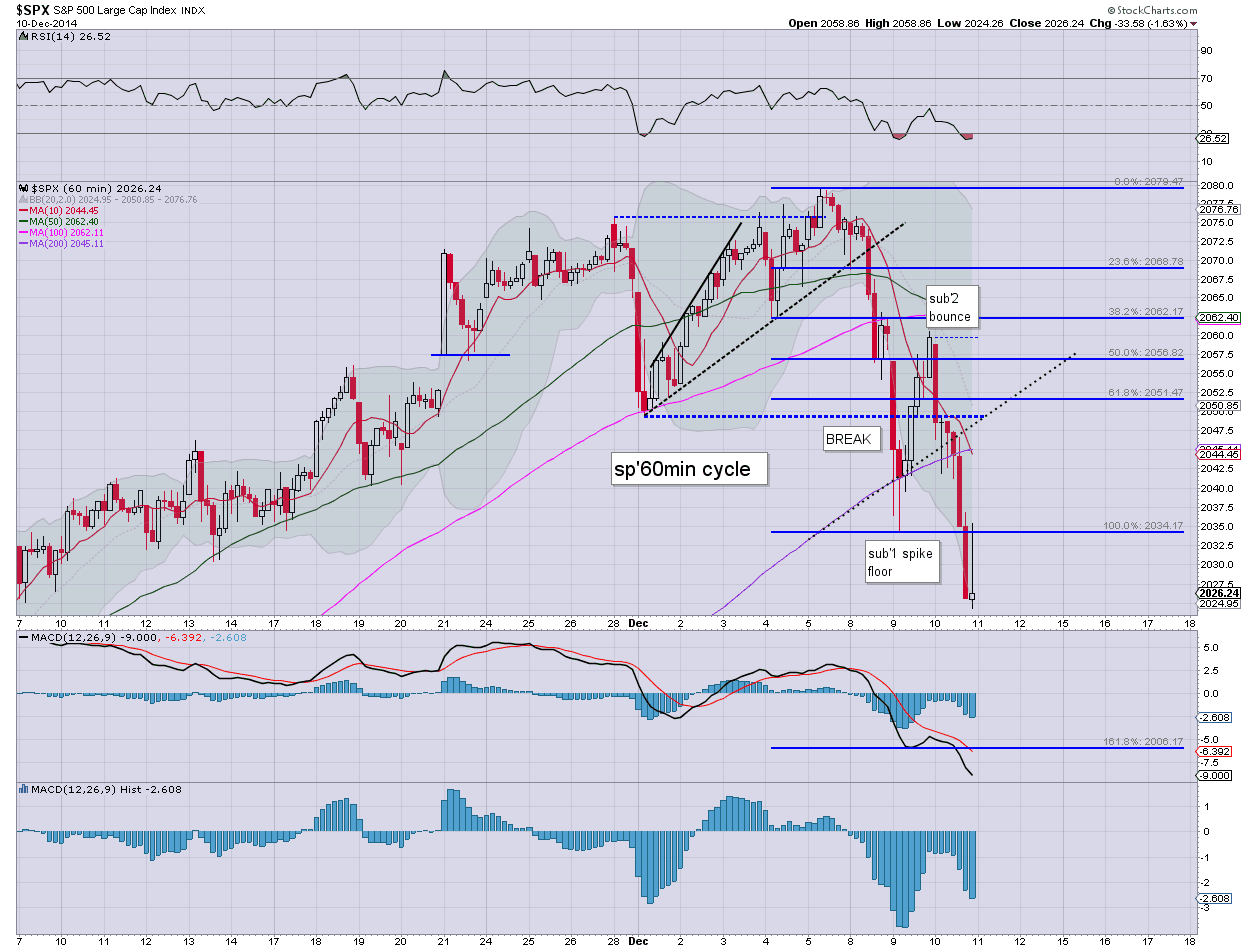 Certainly, at least today did not see a repeat of the nonsense that was yesterday afternoon.

So many extreme individual stock moves... almost impossible to decide which to highlight, but more on that later....
-

A full set of updates across the evening :)
Posted by Trading Sunset at 21:02:00
Email ThisBlogThis!Share to TwitterShare to FacebookShare to Pinterest 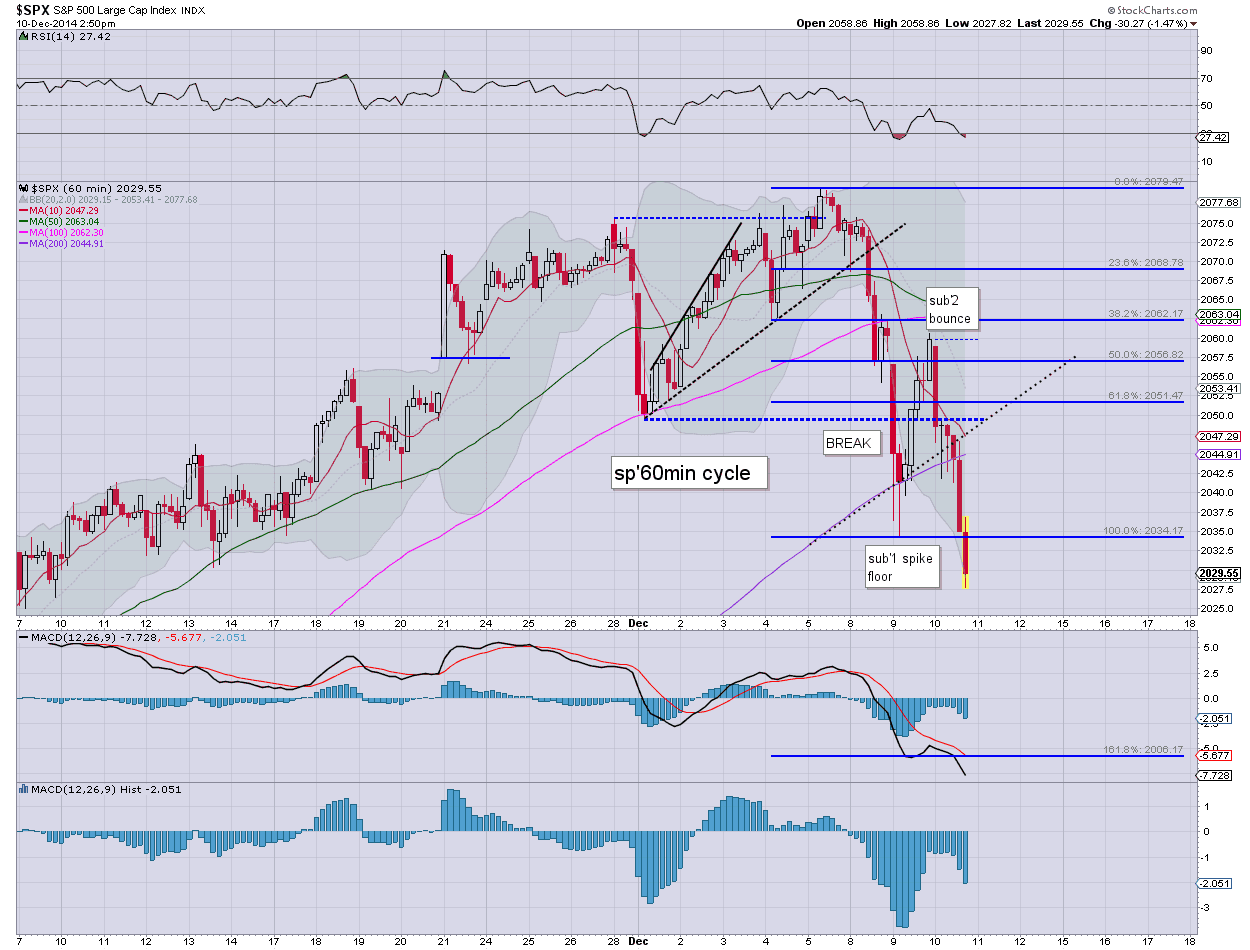 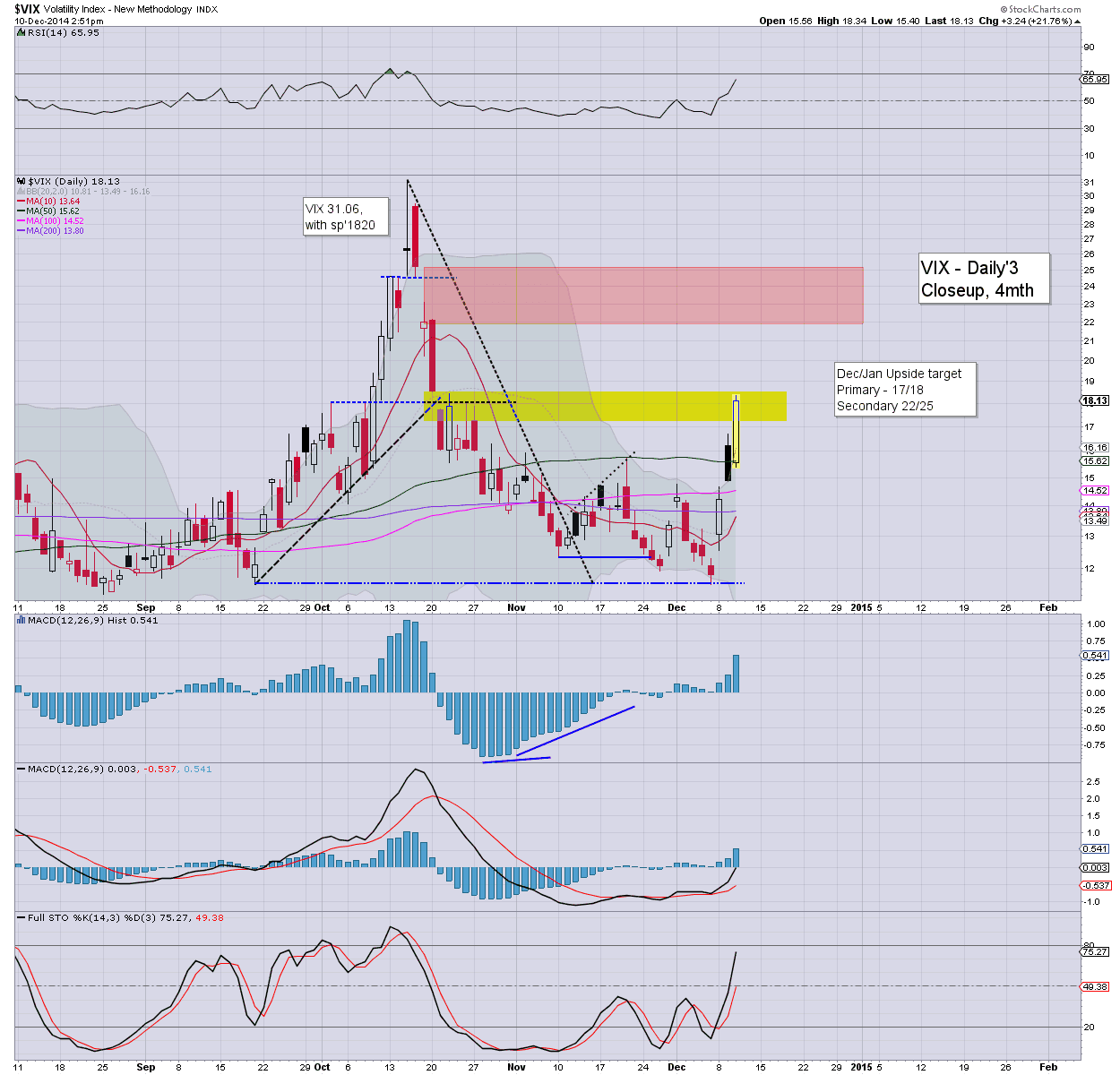 To those bravely shorting.. congrats.. .. but the FOMC clock is ticking.

There are so many extreme down moves today... so hard to even decide... 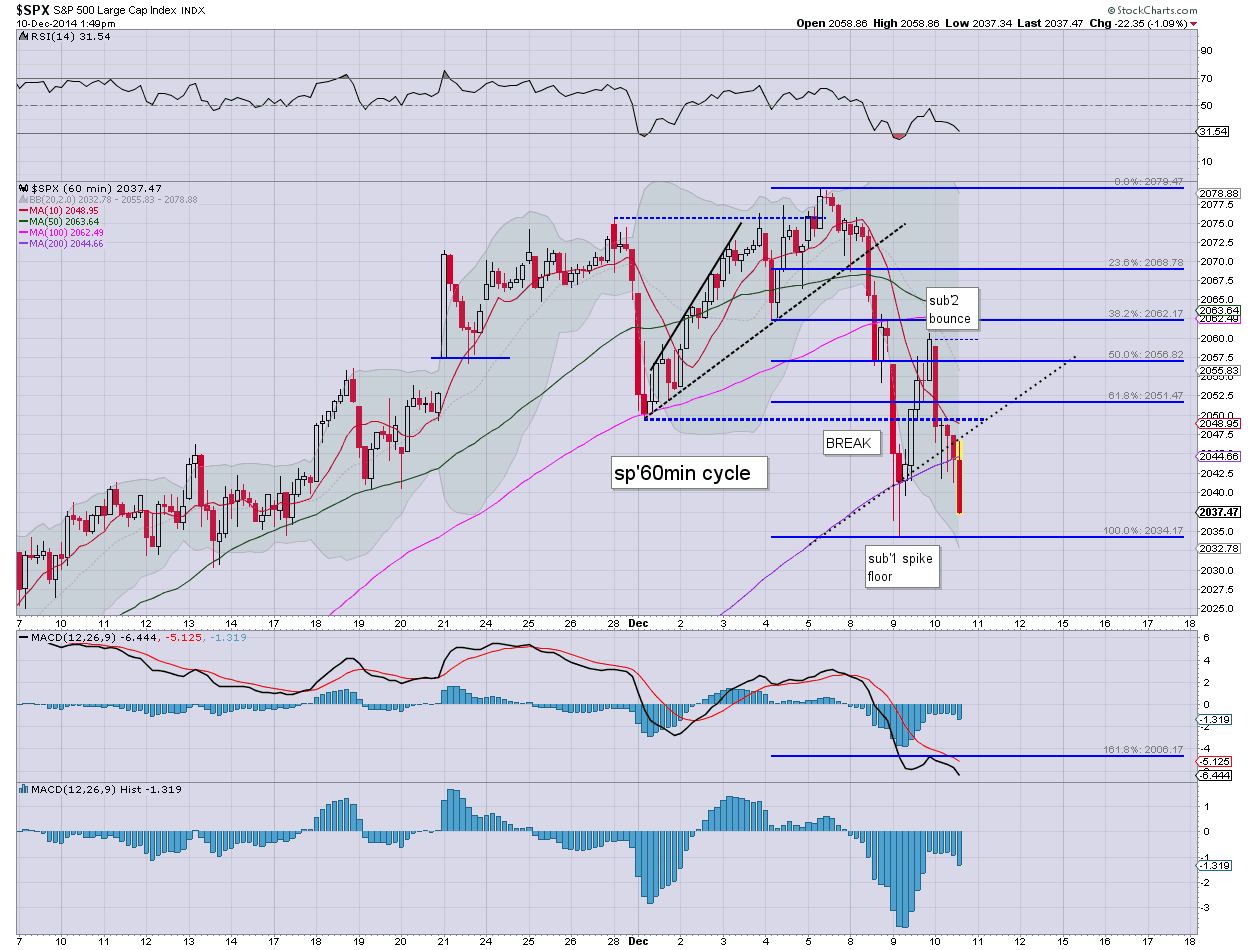 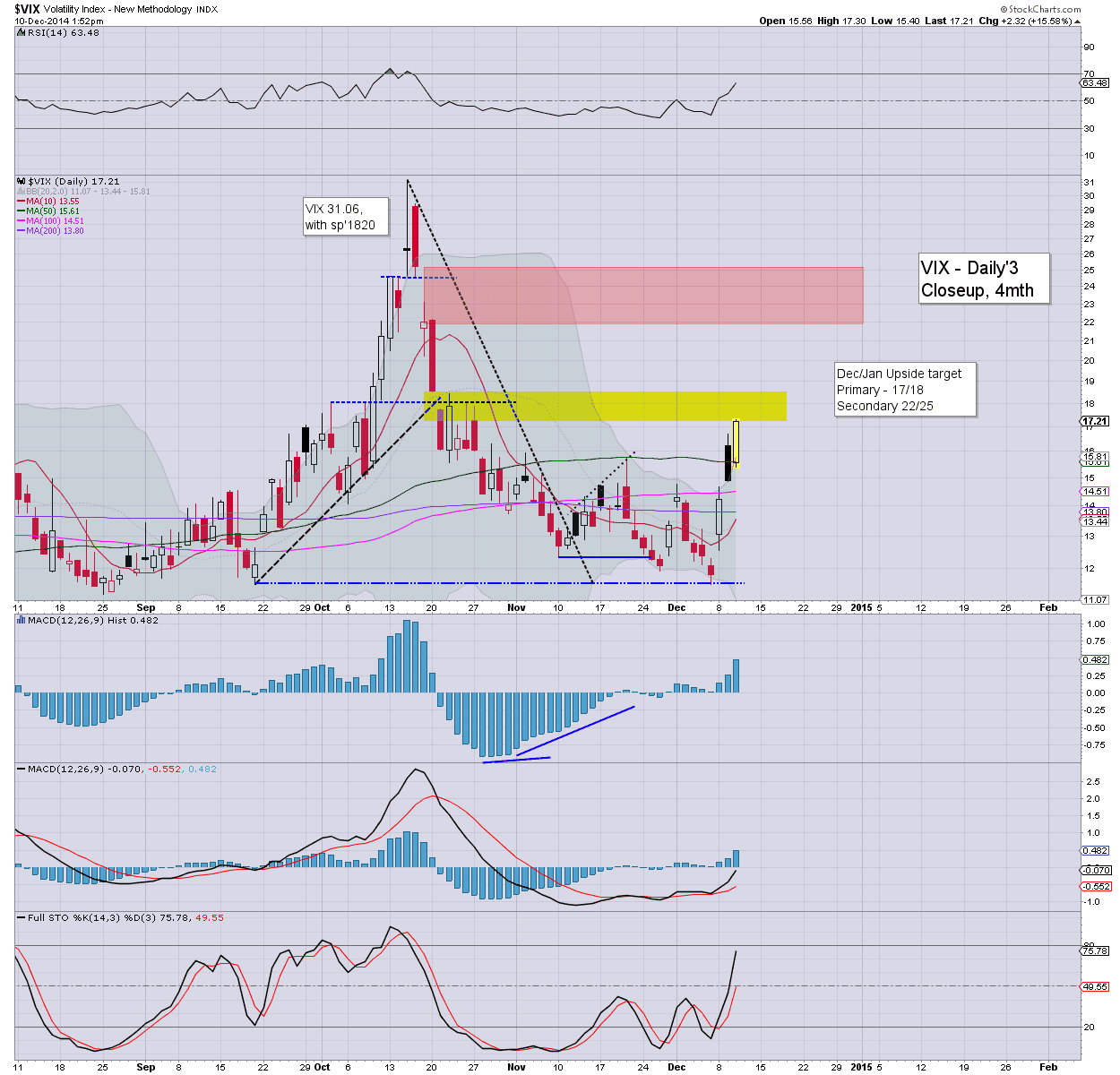 Unlike yesterday, the bull maniacs are failing to show up.

Interesting day, huh?
Posted by Trading Sunset at 18:53:00
Email ThisBlogThis!Share to TwitterShare to FacebookShare to Pinterest

US equities remain broadly weak, and have largely negated much of yesterday's 'stupid bounce'. A break under sp'2034 is viable late today.. along with VIX 17s. Oil remains in collapse mode, -4.8%, set to lose the $60s. Metals are in minor churn mode, Gold -$2 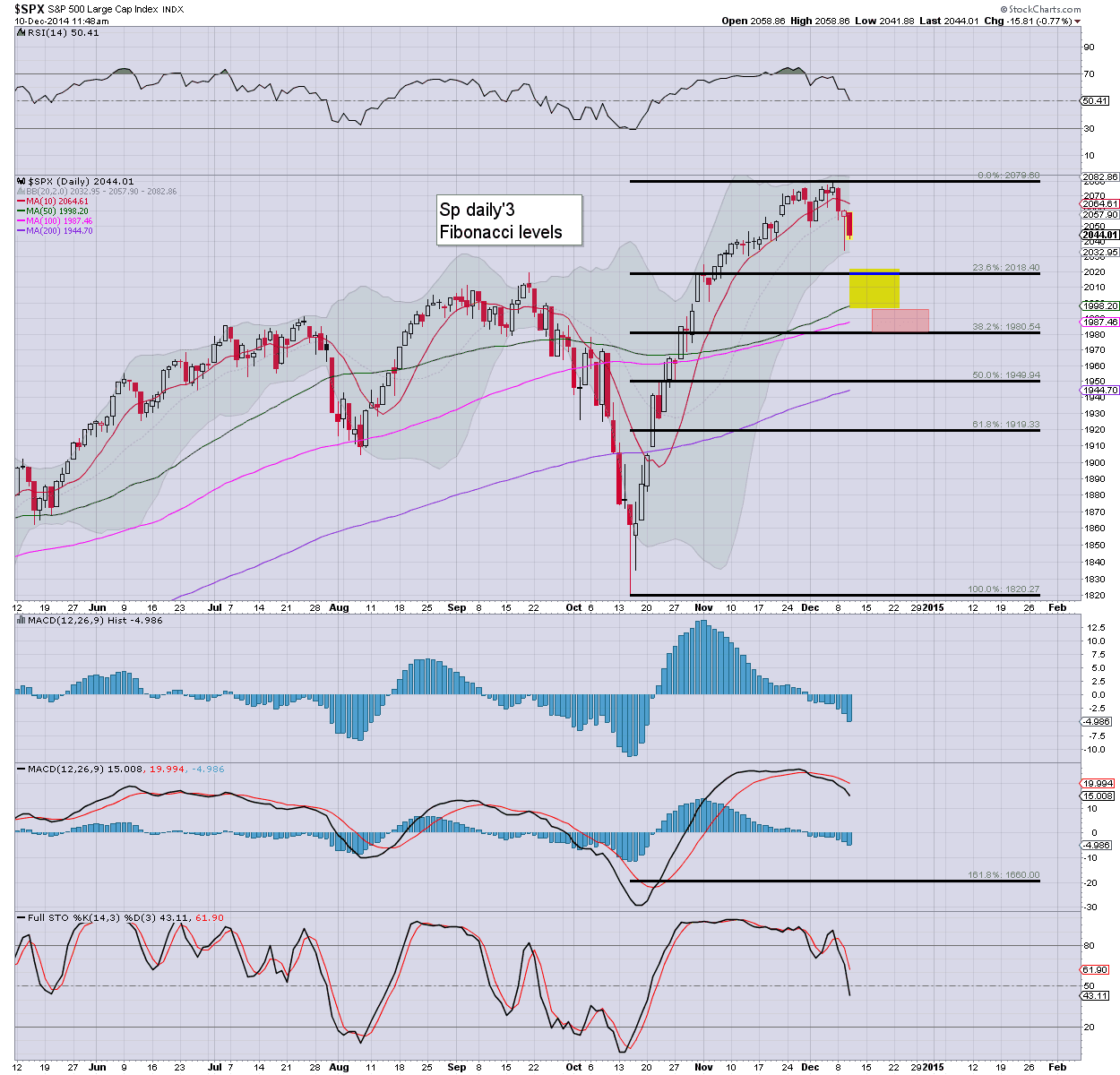 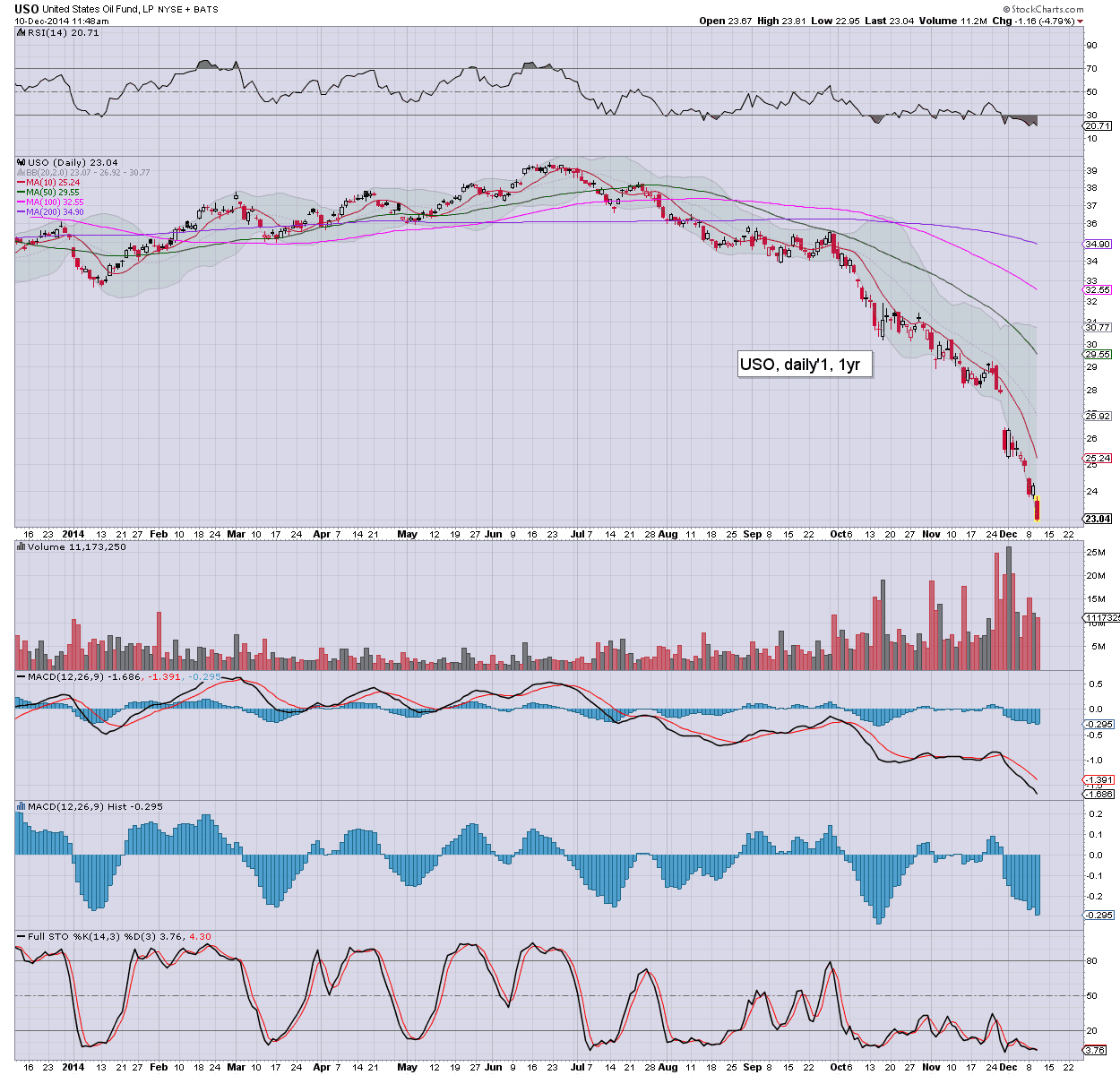 The action in Oil remains particularly amusing, with lower energy prices bullish not just for the US of course.. but for the world.

The really exciting outlook is for Oil to remain lower for the entirety of 2015. The precious metals miners will be greatly helped by that...even if metal prices themselves also see another major wave lower.


-
time for lunch... back at 2pm
Posted by Trading Sunset at 16:50:00
Email ThisBlogThis!Share to TwitterShare to FacebookShare to Pinterest 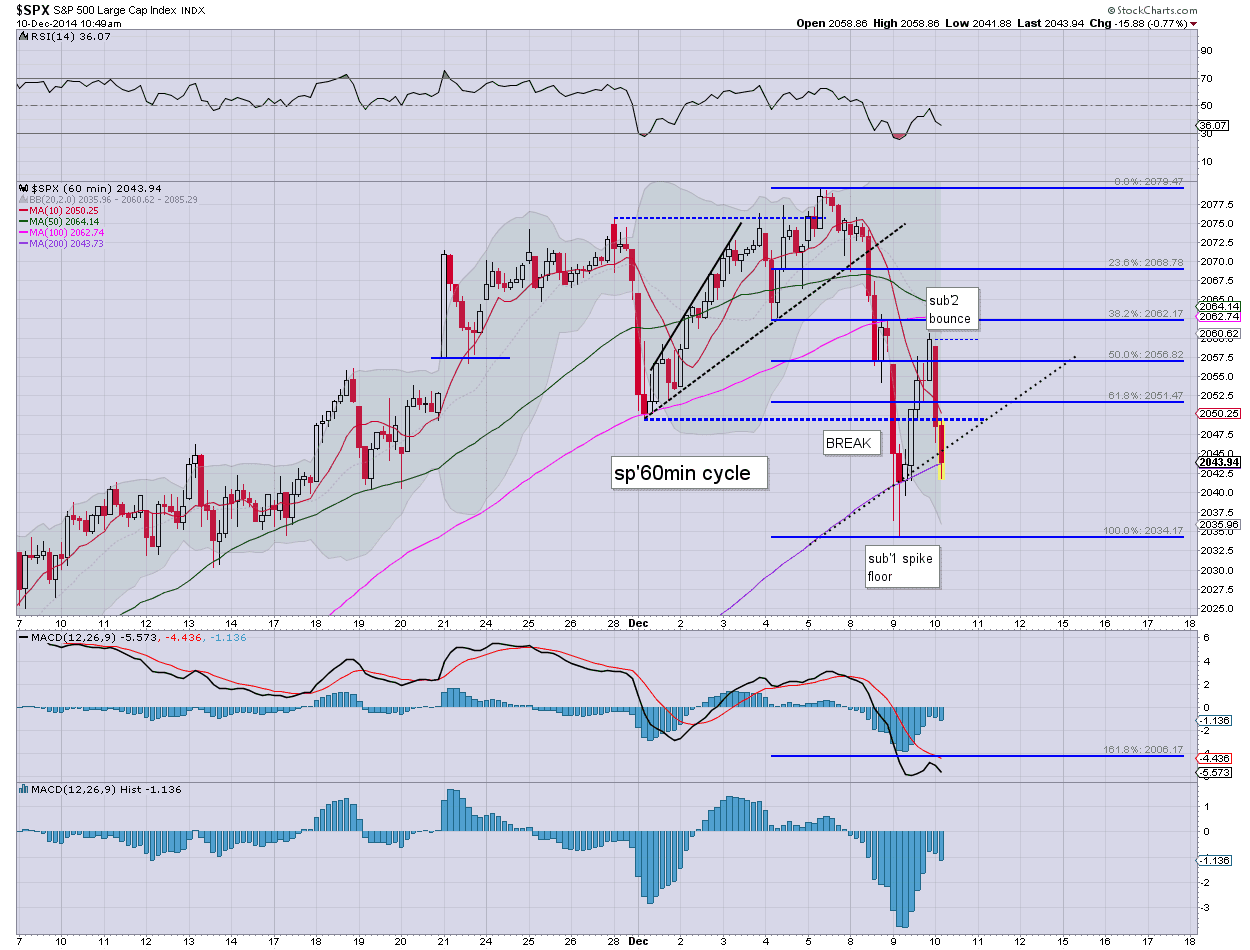 So.. yesterday's latter day bounce was indeed just a 'stupid bounce'... if a disturbingly powerful one (not least in R2K).

Most energy stocks are getting destroyed... 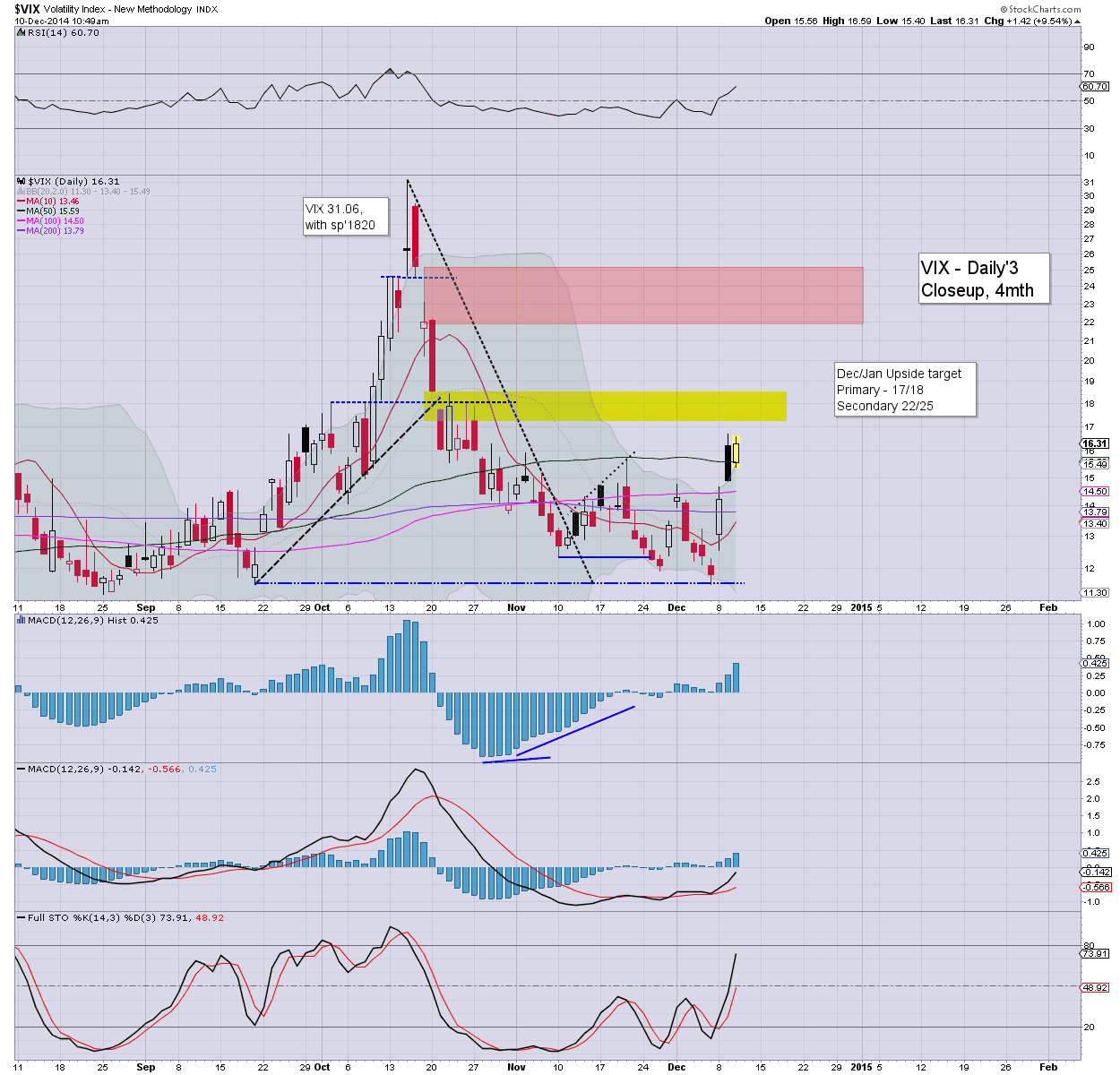 --
time to cook... back soon
Posted by Trading Sunset at 15:51:00
Email ThisBlogThis!Share to TwitterShare to FacebookShare to Pinterest

US equities open moderately lower, with the sp' already back in the 2040s. VIX is higher for the third day, the 17/18s look likely by end of the week. Oil breaks a new multi-year low, -2.5% in the $61s. Metals are cooling after the recent two days of strong gains. 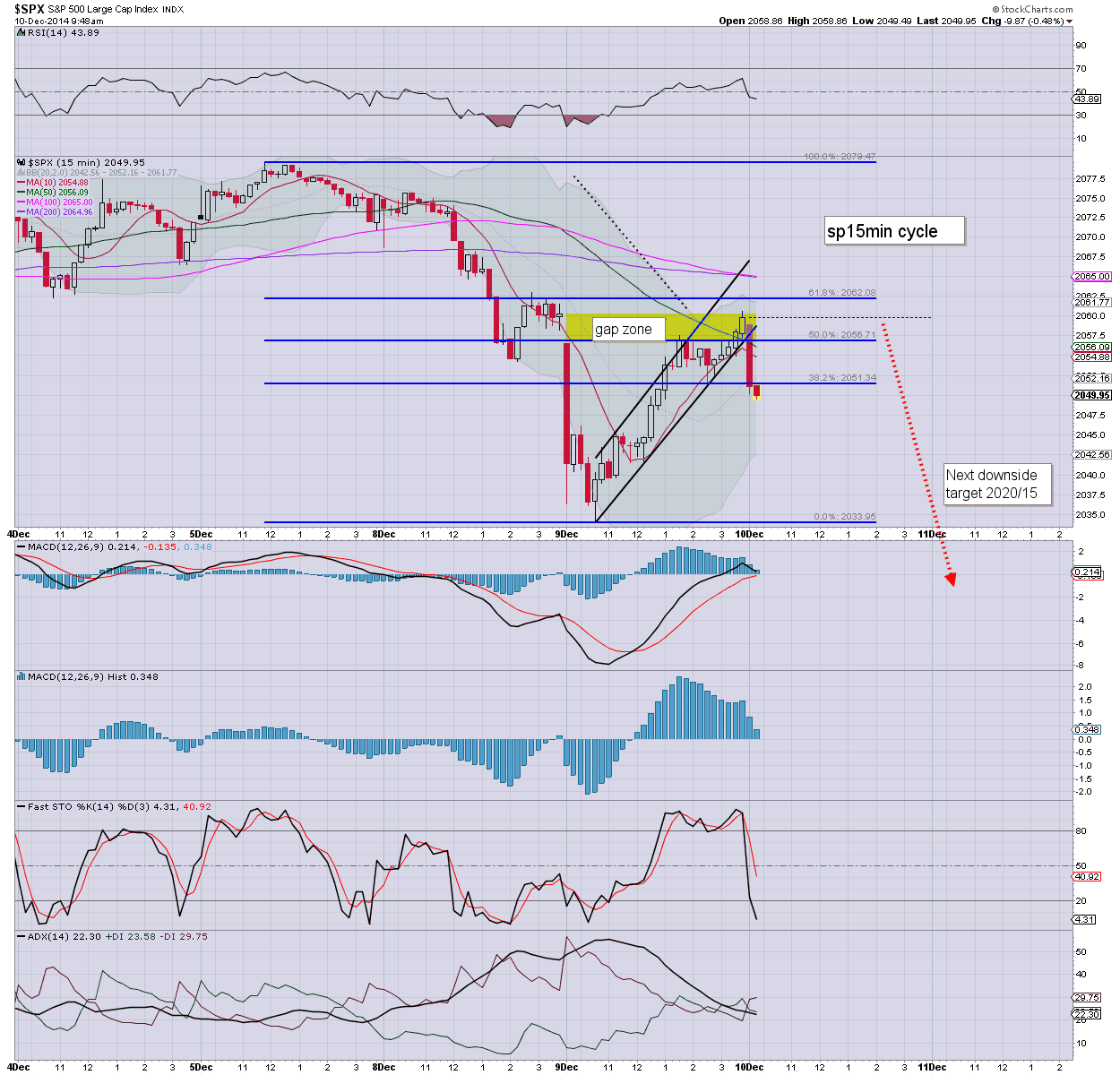 So... we're back on the slide... with the obvious first soft target being yesterday's low of 2034.

VIX is certainly confirming the increasingly twitchy market... it looks set for the 17/18s... if not 'briefly' 20 threshold. 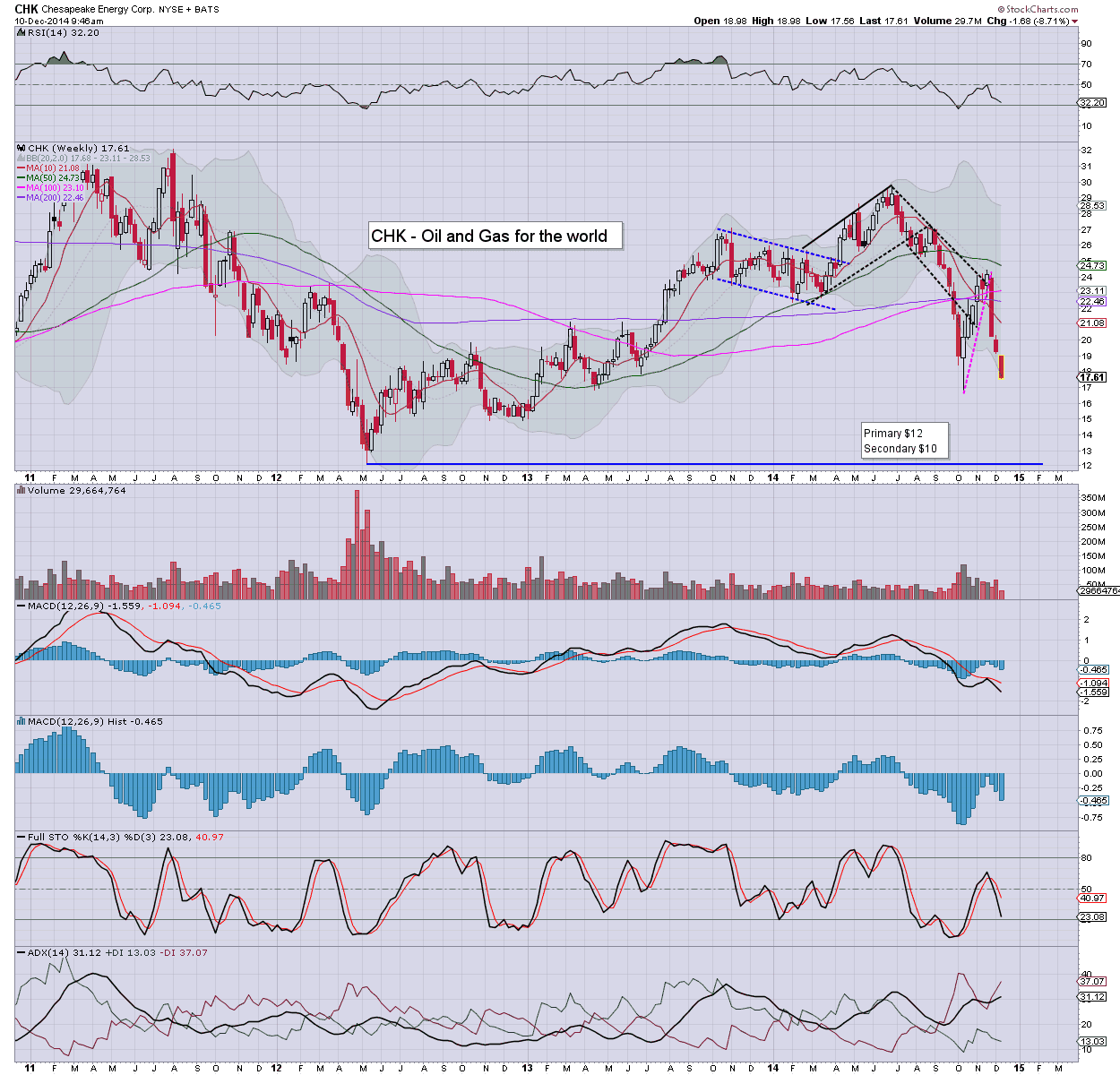 Seen on the bigger weekly cycle.. the downside for Chesapeake is pretty clear.. its very likely headed for 12/10 zone.. before the first real attempt at a key floor.
-

Equities weak... not least energy...
Posted by Trading Sunset at 14:49:00
Email ThisBlogThis!Share to TwitterShare to FacebookShare to Pinterest 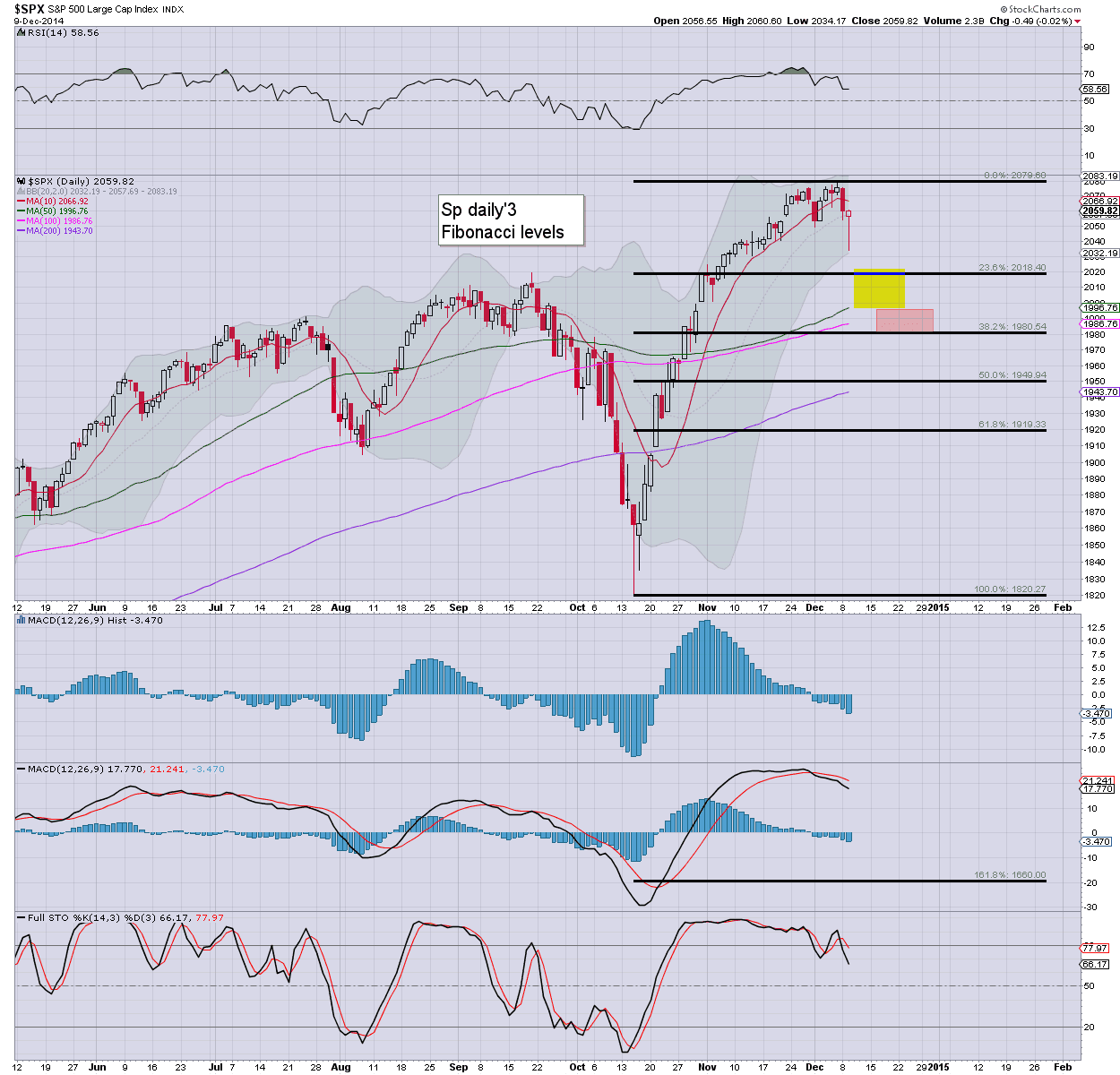 So.... what about today? Clearly, yesterdays' latter day bounce will have calmed the concerns of those who are still seeking the sp'2100s before year end.

As it is, I still think there is a very viable window of opportunity for the bears to knock the market lower by 2-3% by the FOMC of next Wednesday.

What many do seem agreed on... the FOMC will make for another floor... and excuse for the market to launch higher into the new year.
--

The end part on the USD is interesting, although I'm more interested in the implications for next year, not least in increase capital flows into the US from EU/Asia.
--

No doubt bail-ins are coming at the next crisis, but will the US Govt. really let any of the major banks/institutions go under? Regardless... for anyone with cash in the banking system..when the next crisis hits... expect at least some of your funds to be forcibly taken away from you!

On that note of state theft, have a good day.
Posted by Trading Sunset at 13:30:00
Email ThisBlogThis!Share to TwitterShare to FacebookShare to Pinterest

The last few days have seen some interesting drama in world equity markets. China has seen the giant ramp from the summer conclude, with a severe intraday reversal. The Greek market has imploded, falling -12% in a single day, whilst the Russian market continues to collapse. 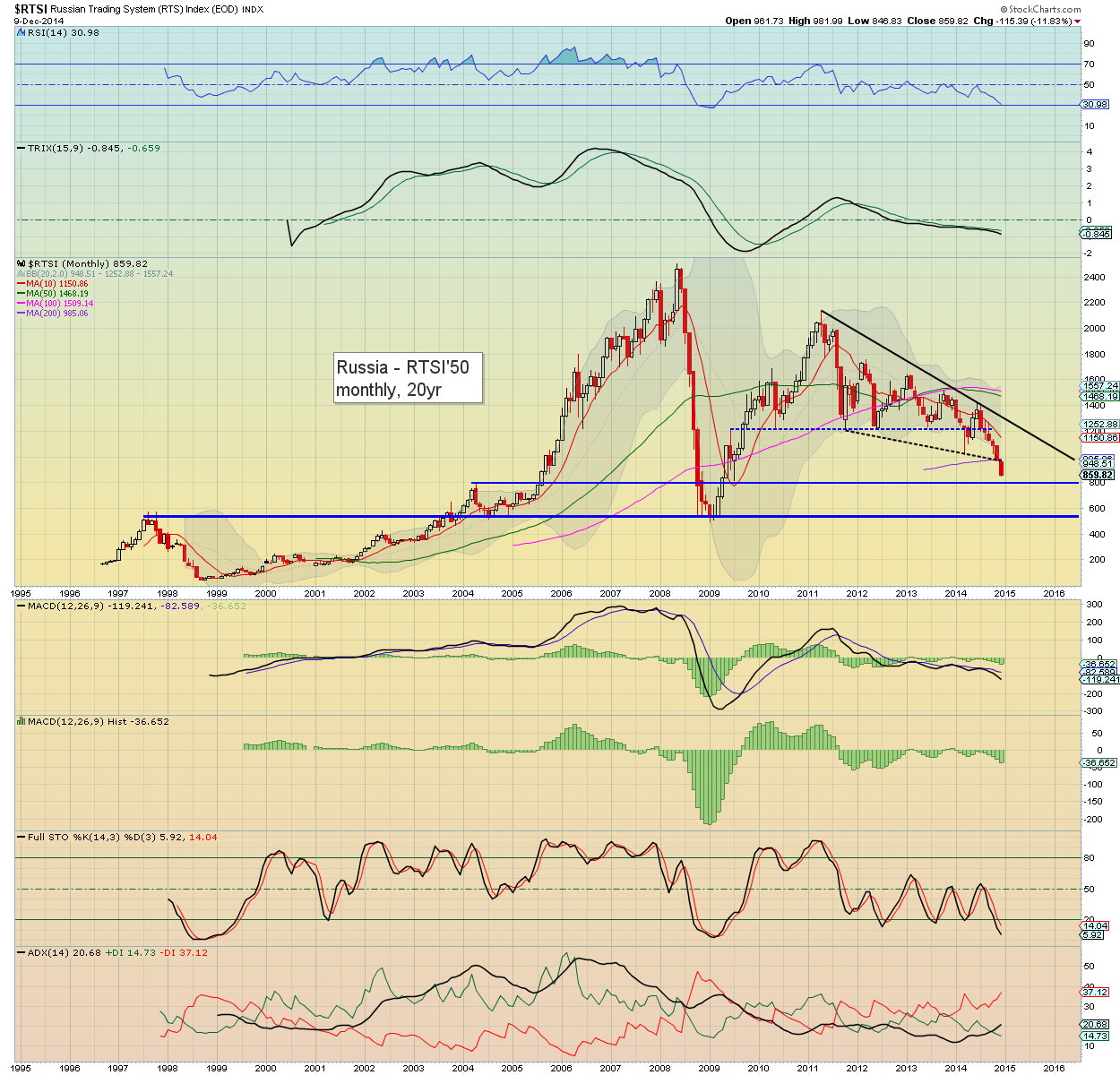 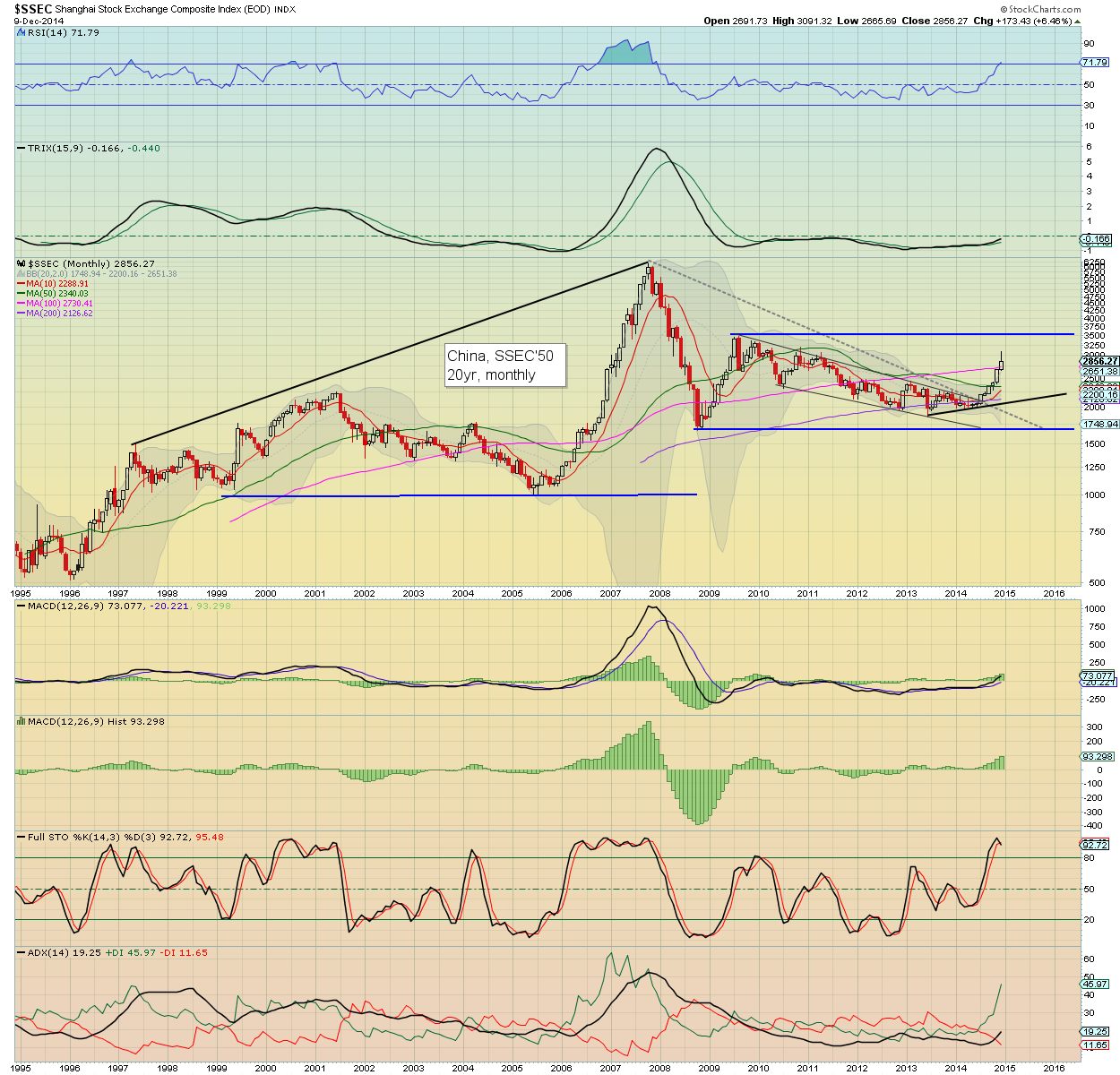 *first, a closer look at the Shanghai composite, which when seen on a daily chart.. really did go crazy bullish since July. 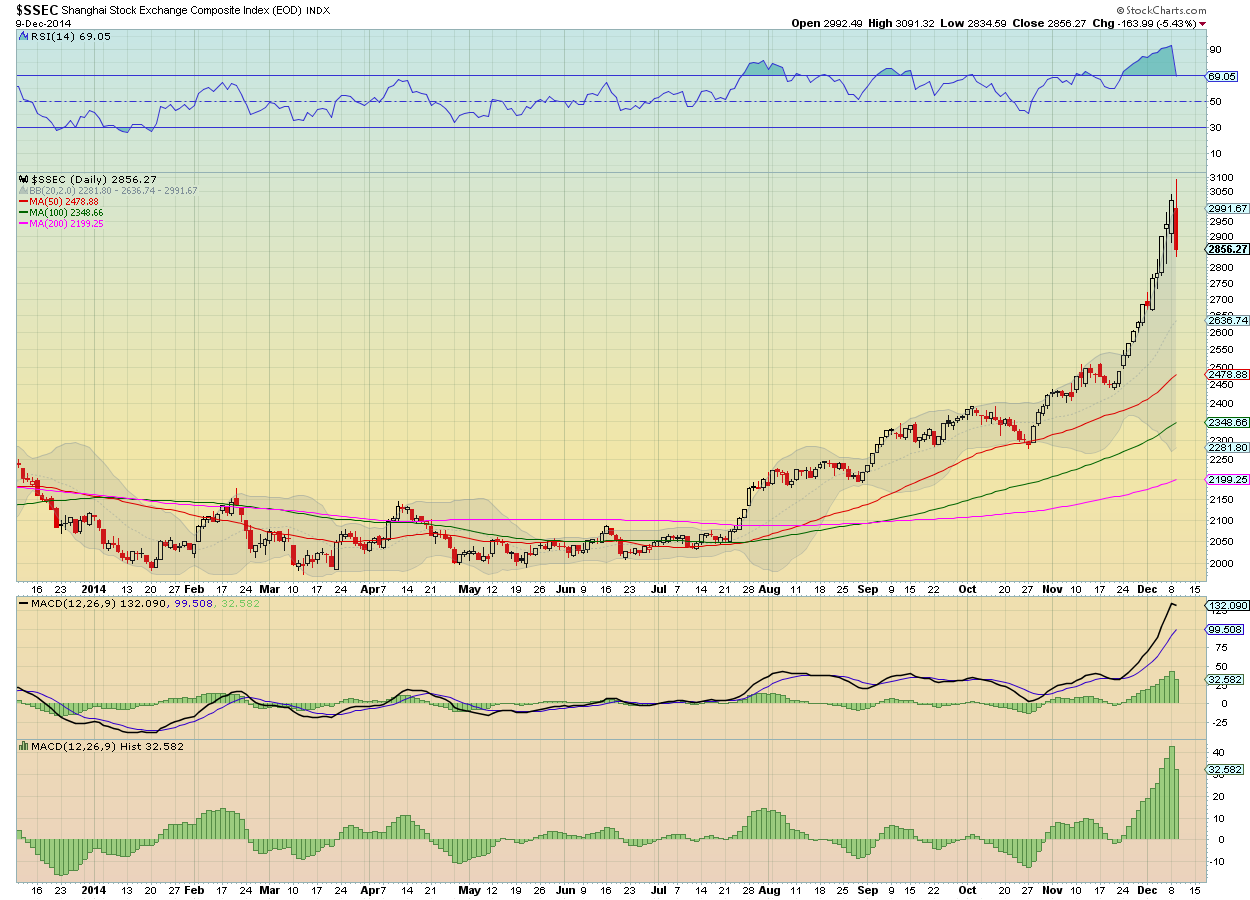 An incredible ramp, roughly.. 2k to 3k.. a 50% ramp across just 8 months. 3500 will no doubt be hit after the current 'shaky retrace' is complete. The real issue is whether a sustained break >3500 next year... if yes, then 5/6k.. which would bode for broader Asia market strength... and that would surely feed across to the US and even weak EU.
--

An extreme -12% daily decline for the Greek market.. especially weighed down by the announcement of an earlier than expected 're-authorisation of the presidents term'. So.. not long to wait.. and it'll certainly add some 'spice' just before Christmas! 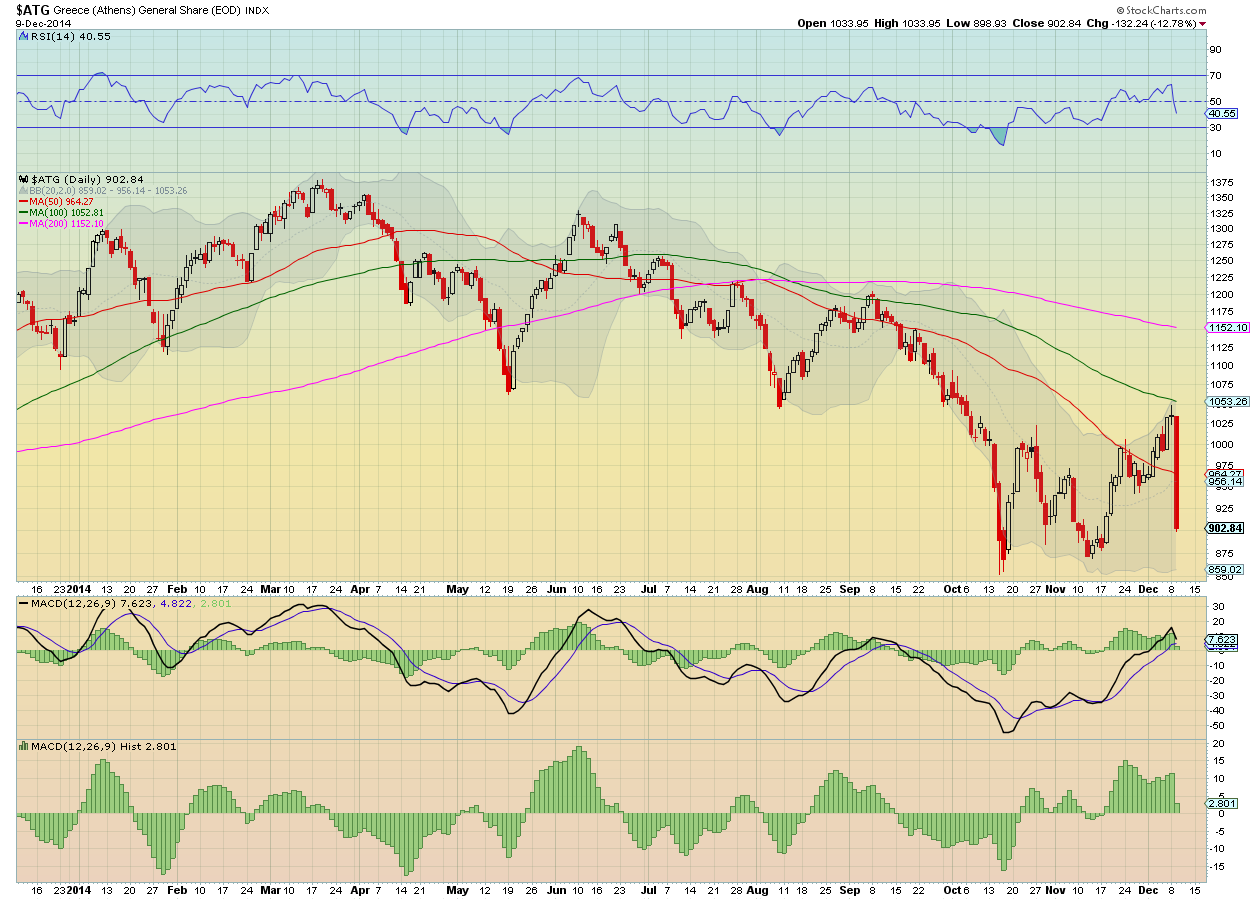 Price structure was a large bearish flag on the daily, today's break lower was not a surprise, but the scale certainly was, the biggest one day decline since 1987. The Athex needs to hold the Oct' low of 852.. or the summer 2012 lows (471) are once again viable. That sort of renewed collapse would be a real problem for other EU markets, via a spillover/contamination effect.
--


As for the US market... unless Dow 17k fails at some point... there is nothing for the equity bears to look forward to. 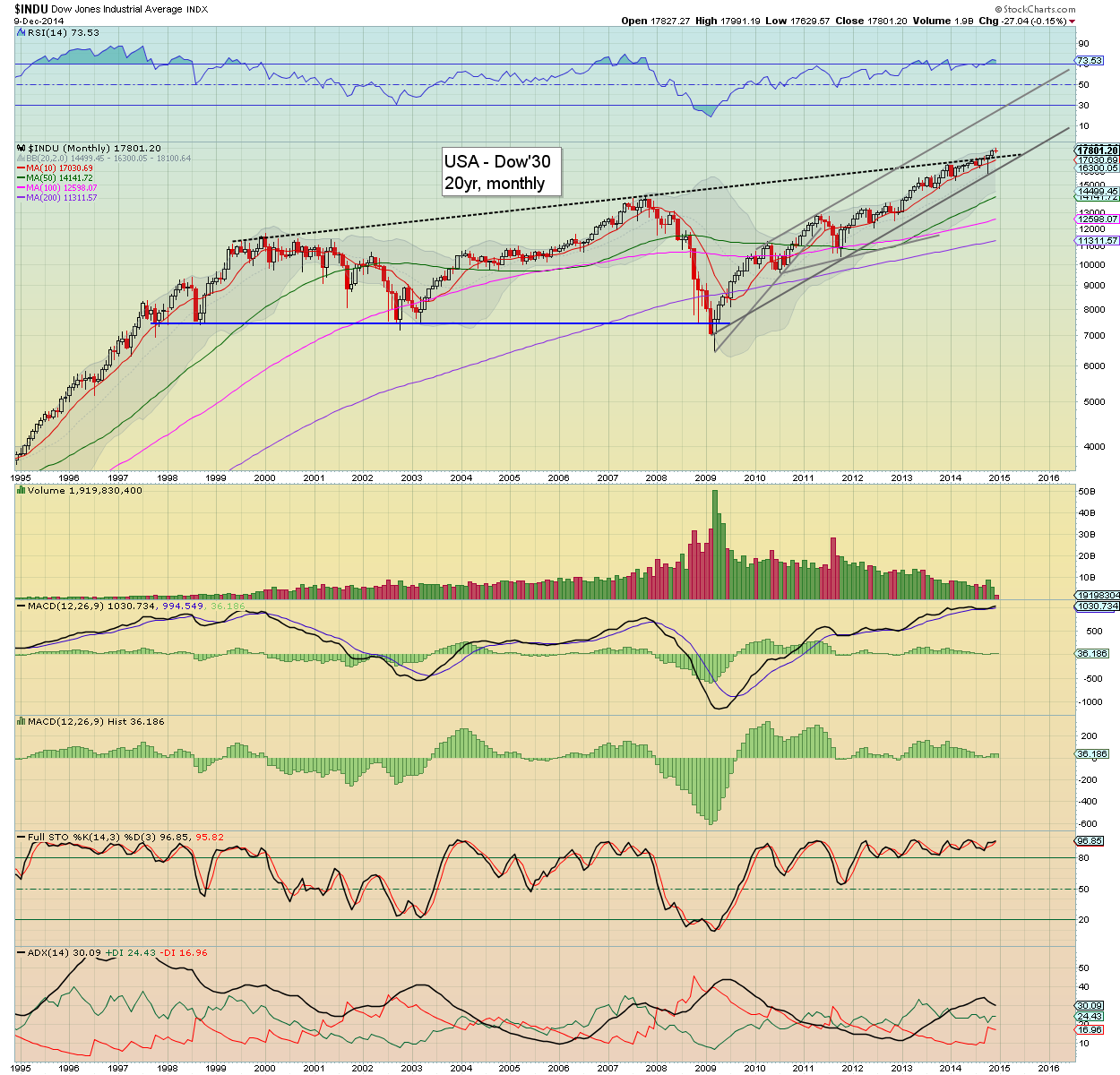 Wednesday will see the US Treasury budget, although these days.. hardly anyone cares. After all, if the treasury lacks enough tax revenue to cover expenditure.. just issue more bonds.. and the Fed will indirectly buy the bonds (from select institutions) with new 'QE money'.
-- 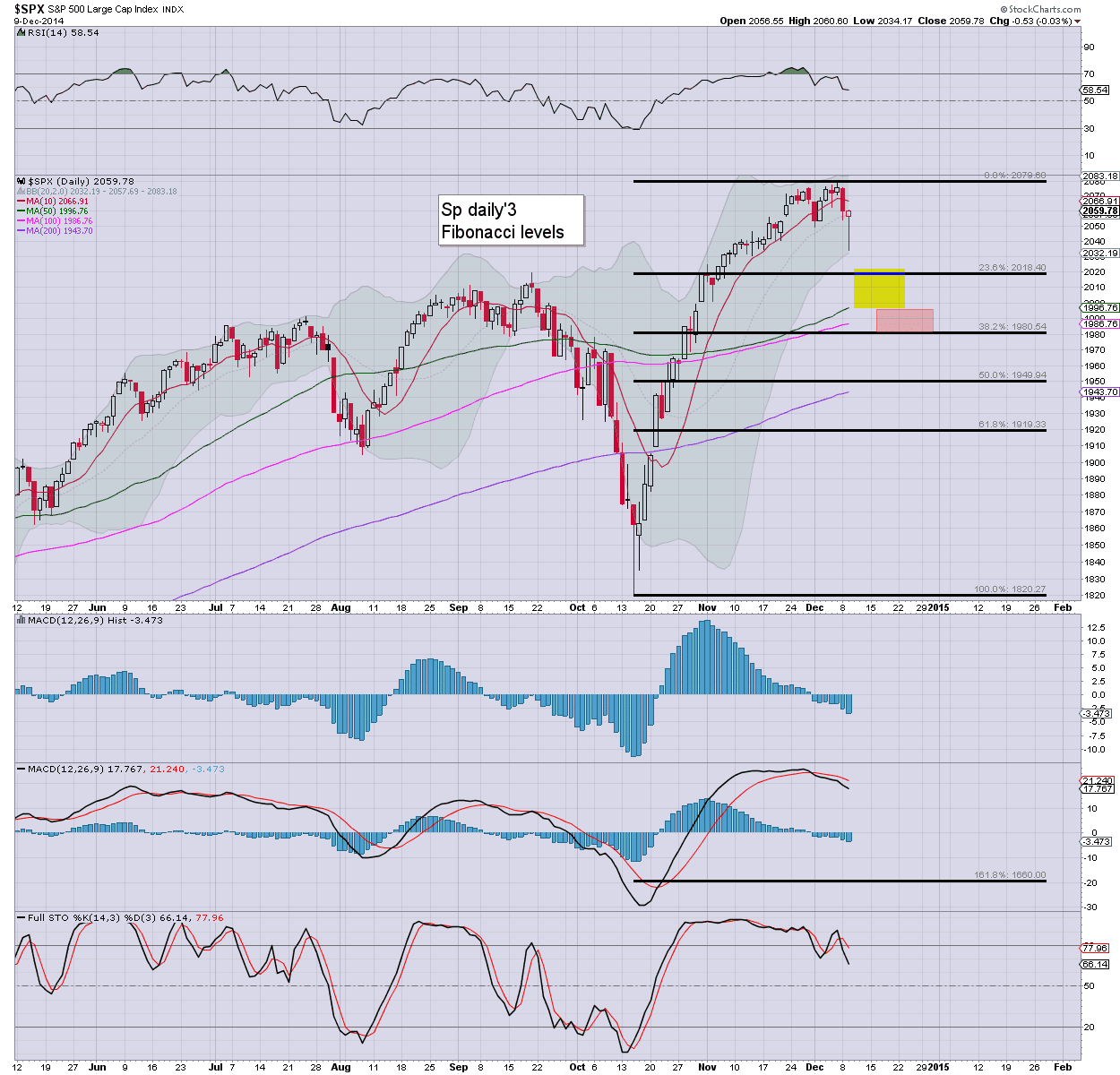 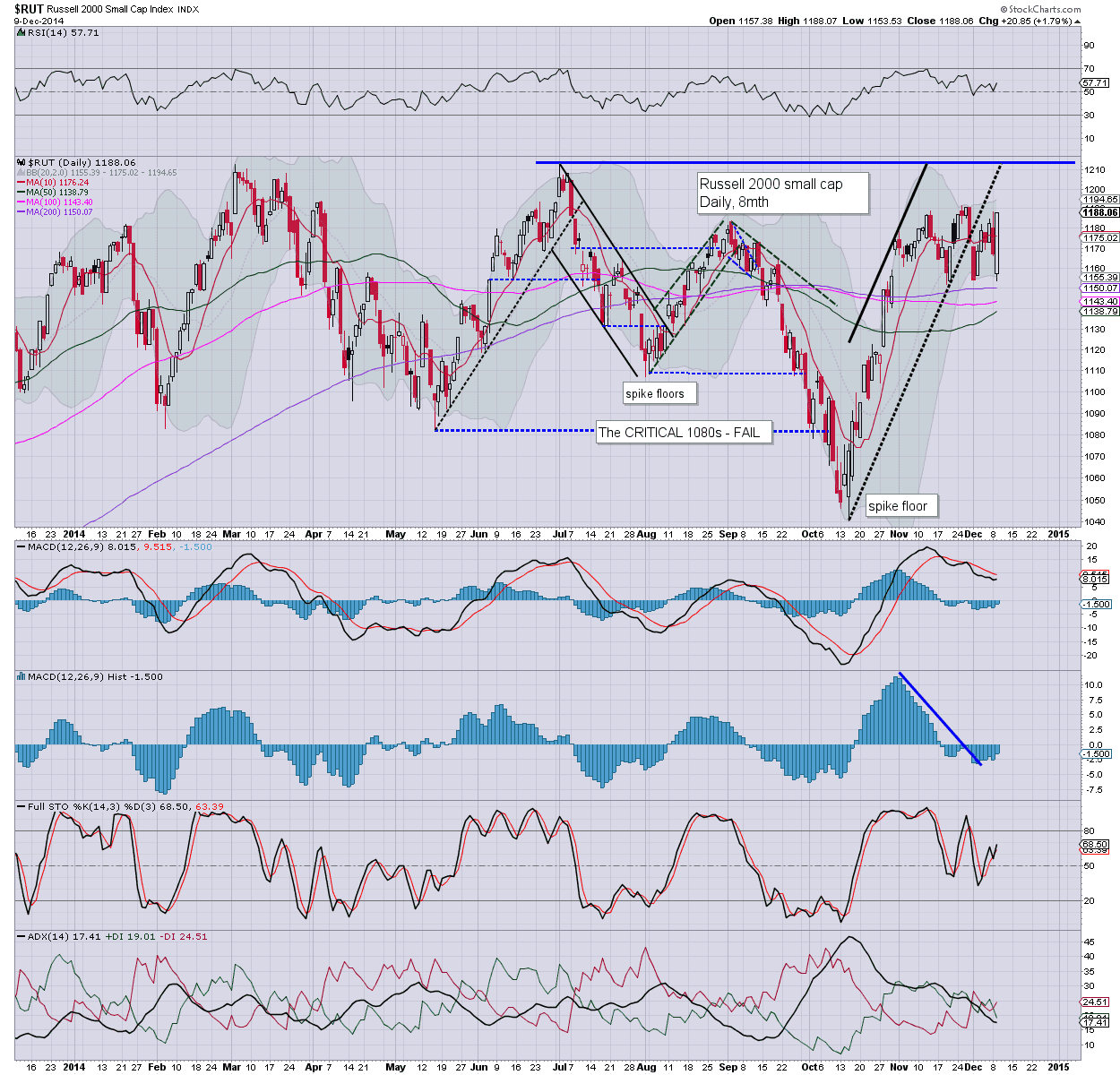 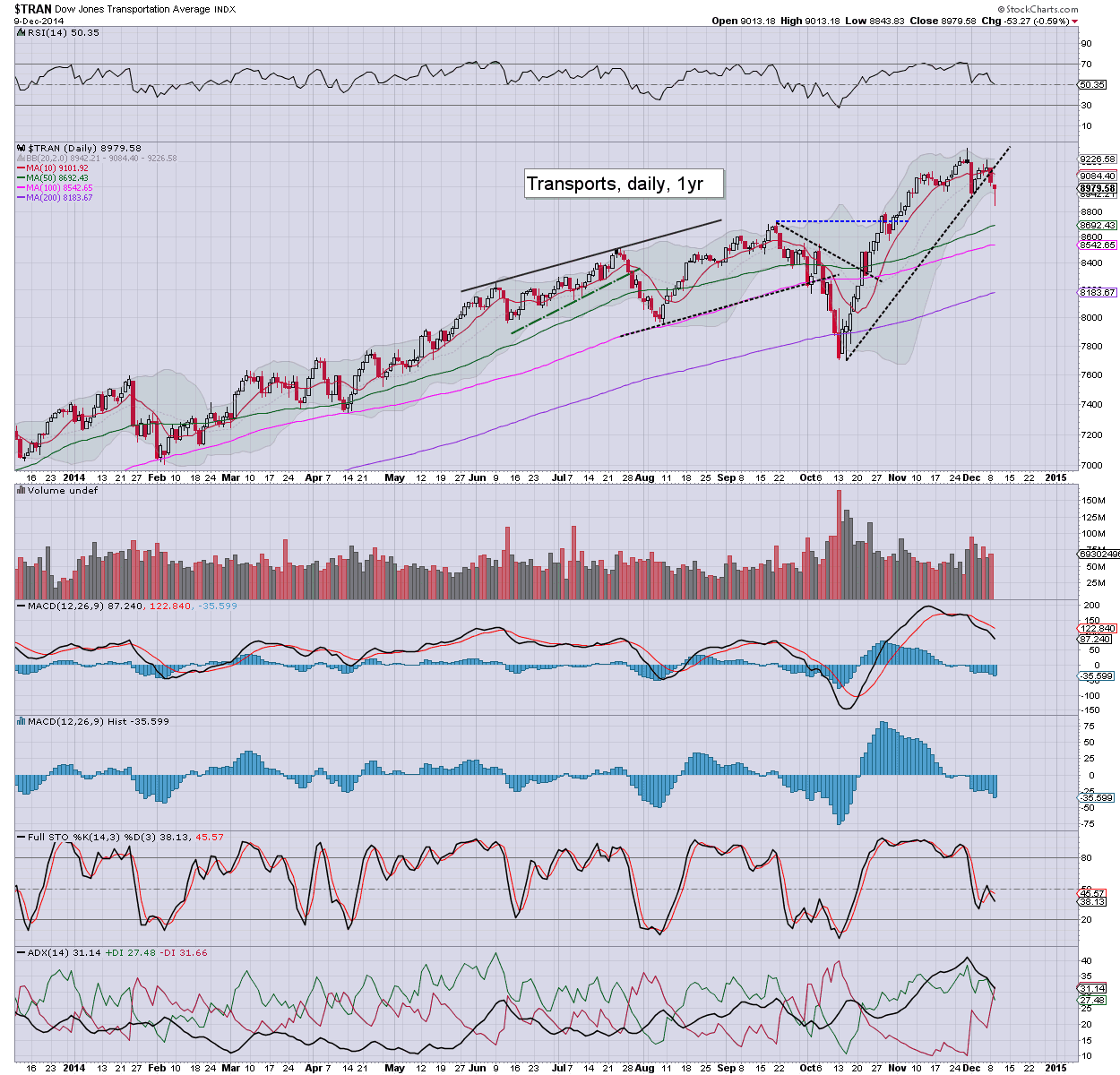 Suffice to say... despite the strong intraday bounce (esp' in the R2K/Nasdaq), price action IS different from the past few weeks, and we're likely at day'2 of a moderate decline.

On no outlook do I see sustained trading below the giant sp'2000 threshold.