It was a broadly bullish month for world equity indexes, with net changes ranging from +11.2% (Brazil), +4.1% (Spain), +1.5% (Germany), -0.9% (USA - Dow), to -2.2% (Australia). Near term outlook threatens some 'election inspired' turmoil. How November settles will be extremely important, in whether the upward trend from Jan/Feb' remains intact. 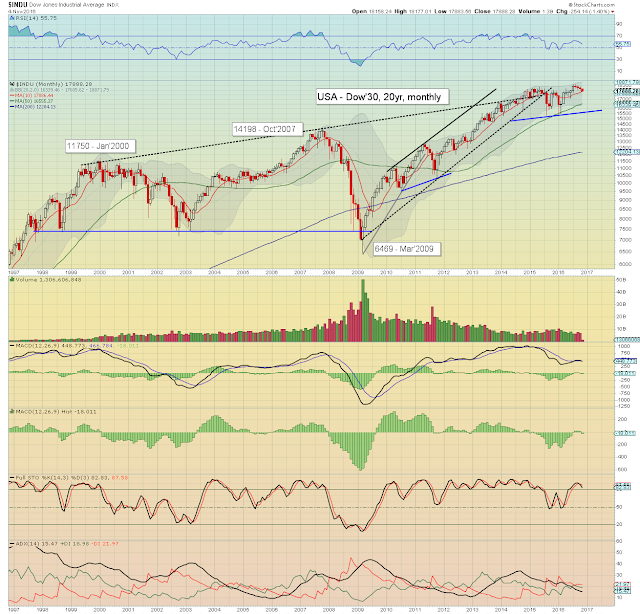 The mighty Dow settled lower for a third consecutive month, -165.66pts (0.9%), at 18142. It is highly notable that underlying MACD (green bar histogram) cycle, which was positive across Aug-Oct', has turned negative. Such a failure around the zero threshold is rather bearish.

Clearly, with the fed set to raise rates Dec'14th, the next big threshold of 19k looks out of range until early next year.

Alarm bells should sound on any weekly close <17600, which would be decisively under the 200dma, the lower weekly bollinger, and also the monthly 10MA.
-- 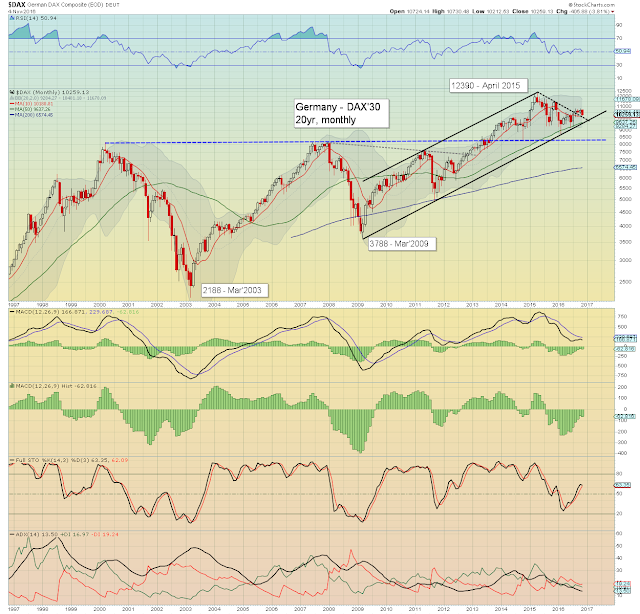 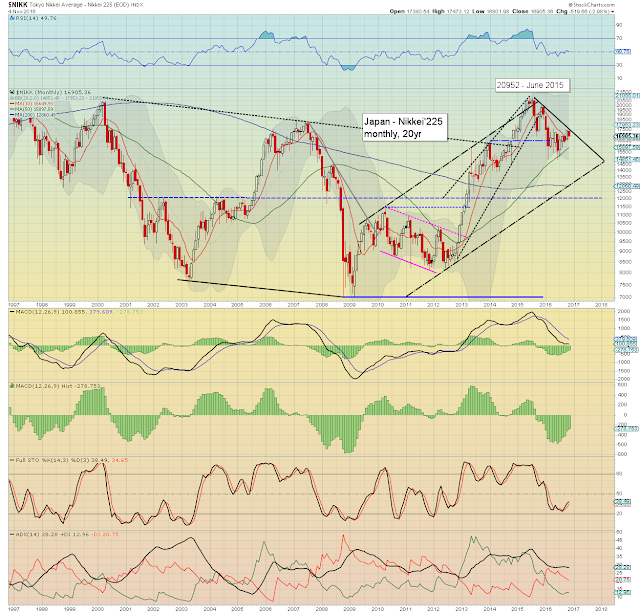 The BoJ fueled Nikkei settled +975pts (5.9%) at 17425, above the 10MA for the first time since Dec'2015. It is notable that so far this month, the Nikkei is getting stuck around declining trend/resistance, that stretches back to the June 2015 high. A failure at this level would be a serious problem. Equity bulls should be battling for a year end close >18k. 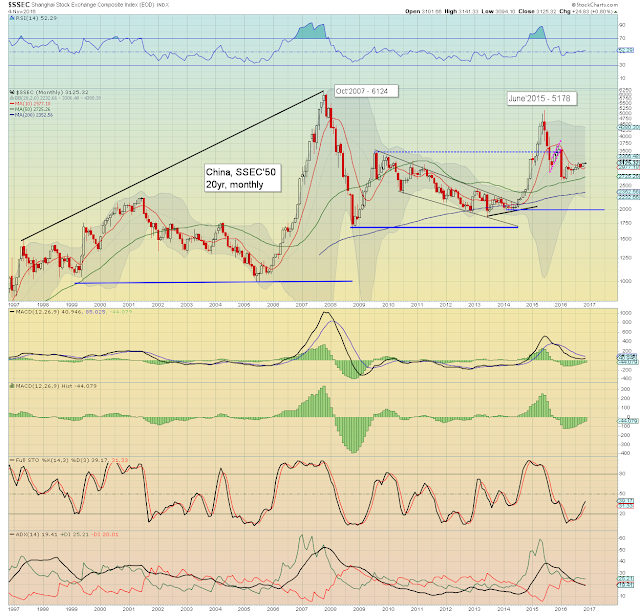 The Shanghai comp' gained a rather significant 95pts (3.2%), settling at 3100, the best monthly close since Dec'2015. Underlying price momentum continues to swing back toward the equity bulls. At the current rate, there will be a bullish MACD cross at the start of Jan'2017. First big upside target is the 4000/4200 zone, and then the summer 2015 high of 5178. 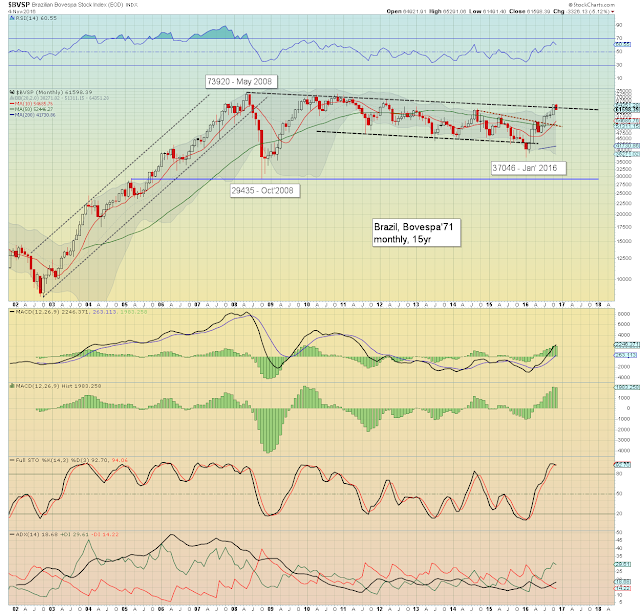 The Bovespa saw an exceptionally bullish month, settling higher for a fifth consecutive month, +6557pts (11.2%), at 64924. This was a clear breakout above declining trend/resistance, that stretches all the way back to May 2008. The breakout is only negated on price action back under the rising 10MA.. currently in the 54000s. On balance, a move to challenge the May'2008 historic high of 73920 looks probable. Talk of an 'inflationary' 100k can begin. 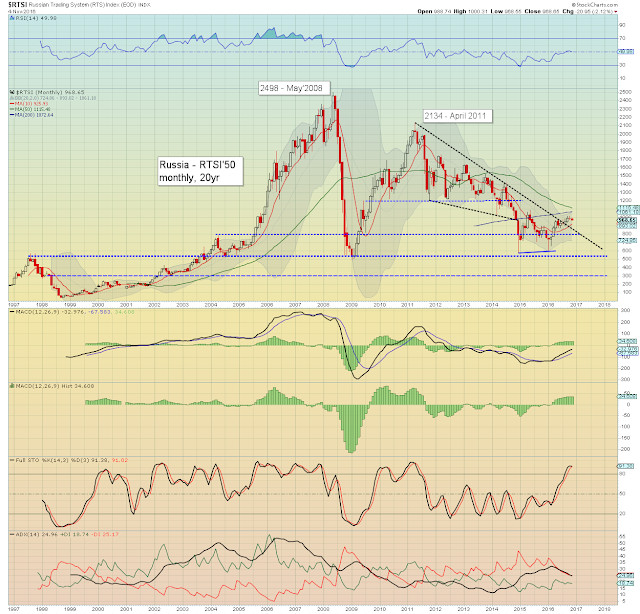 The Russian market saw a month of very narrow range trading, settling -1pt (0.1%) at 989. The 1K threshold is naturally strong resistance, as the RTSI has rallied from the Jan' low of 607. Recent weakness in oil/gas prices has been especially problematic for Russian equities, and if we're to see a monthly close >1K, energy prices will have to claw back upward. 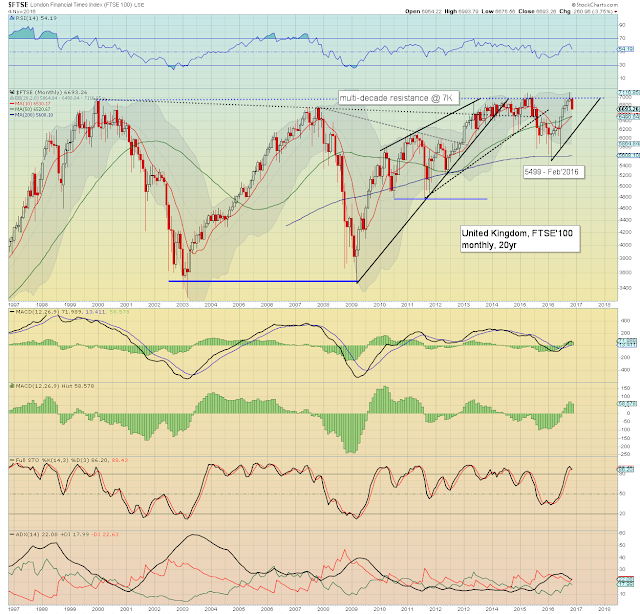 The FTSE climbed 54pts (0.8%), settling at 6954. The October candle was pretty spiky, as the FTSE is still unable to break/hold the multi-decade resistance of 7K. Current weakness to the 6600s should concern the bulls, although things really only turn provisionally bearish with a break back under the 10MA.. currently in the 6500s.

The ongoing BREXIT chatter is not helping the UK market. This week's court ruling that the UK parliament should first meet before invoking the exit clause, could drag this out to the point where the UK just doesn't exit.

Further, its notable that the BoE have upgraded their inflation projections for 2017. Most now expect inflation of around 4% by late 2017.. at a time when the UK could well be in recession. 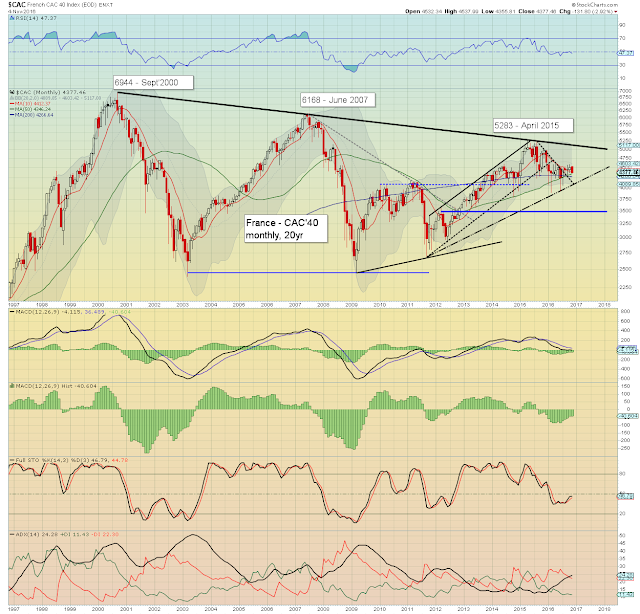 The CAC climbed 61pts (1.4%) in October, settling @ 4509. Underlying price momentum is threatening to stall. Things will turn provisionally bearish with <4200. As of the start of 2017, rising trend - that stretches back to the Sept'2011 low, will be around 4100. Any price action <4k would be extremely bearish. 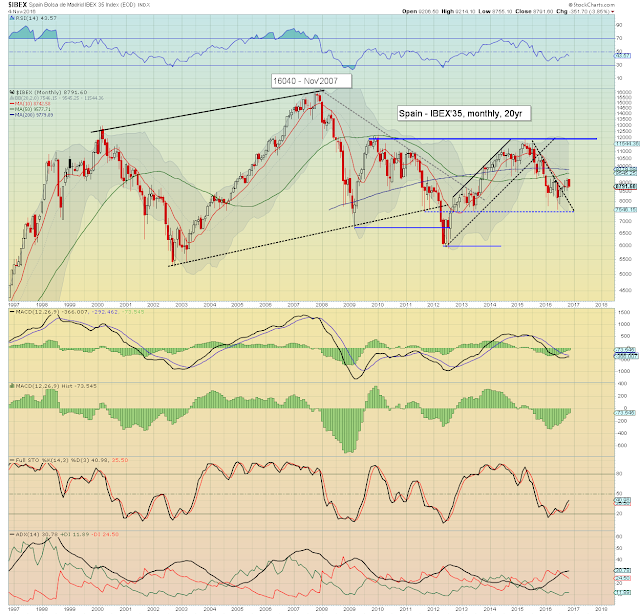 The IBEX climbed for the fourth consecutive month, settling +363pts (4.1%), at 9143, the best close since Dec'2015. With the declining trend from summer 2015 broken a few months ago, the broader outlook for the Spanish market remains bullish. That view is only negated on a move <8K, which is around 10% lower. 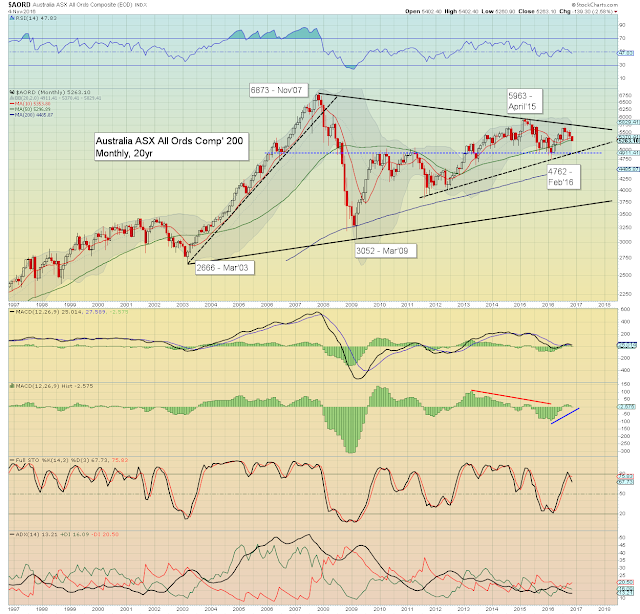 The Australian market was the laggard this month, with a net decline of -122pts (2.2%), settling at 5402. Ongoing price action so far this November remains weak, with the 5000/4900 zone now looking viable within the near term.
--

November has started on a broadly bearish note, with many markets lower by around -3%.

Most world markets are still holding within their broader upward trends, some of which now stretch back a full five years.

The US market is struggling, due to some natural anxiety ahead of the election result.

It will be important to see the majority of world markets settle November flat/moderately higher, as any stalling in price momentum would threaten significant weakness into year end.

The week will of course center not around any particular corporate earnings report, nor even any econ-data point. Instead, the market.. and the world, will be focused on the result of the US election. Barring a messy tie, the result should become clear by 2am EST.

*there is a light sprinkling of fed officials, notably, Bullard, due early Thursday.
--


If you value these posts, please subscribe to me, which will give you access to my continuing intraday commentary at permabeardoomster.com.

*the next post on this page will appear Monday @ 7pm EST.
Posted by Trading Sunset at 16:00:00
Email ThisBlogThis!Share to TwitterShare to FacebookShare to Pinterest
Newer Posts Older Posts Home
Subscribe to: Posts (Atom)