The US equity indexes saw their most notable weekly decline since late August, with most indexes declining between -1.5% and -2.1%. However, baring one further significant week to the downside, the broader trend remains unquestionably to the upside. 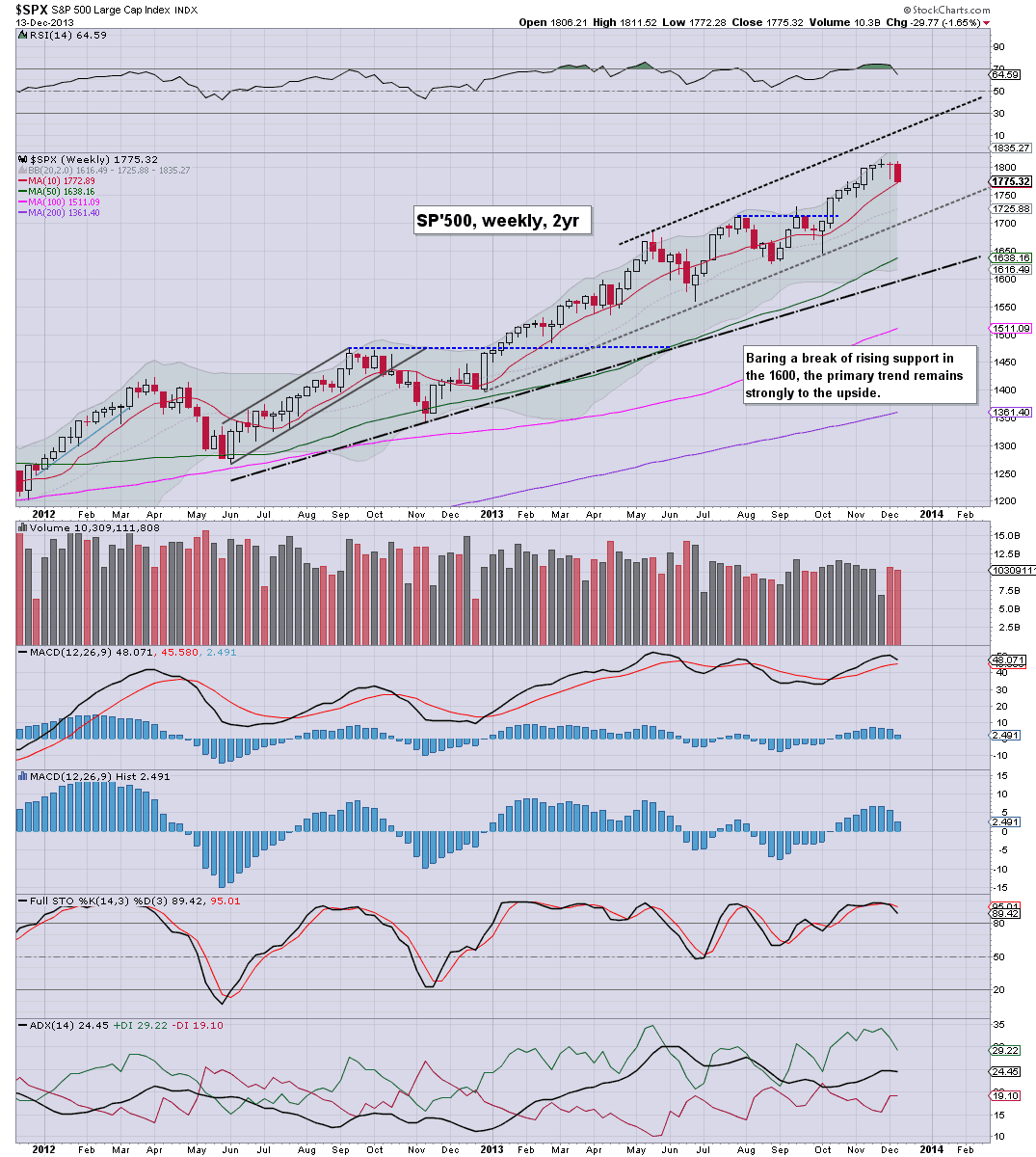 A drop of -1.65% this week, and that is the biggest weekly decline since late August. For the bulls out there, we closed just 3pts above the 10MA - which itself is 1772 - where the market very likely put in a triple floor across Thur/Friday.

Underlying MACD (blue bar histogram) cycle is still positive, but ticked lower for the second week. We're set to get a bearish cross early next week..unless the market can rally back into the 1800s. Only with a break <1700, would I consider the possibility that we already have a multi-month intermediate top. 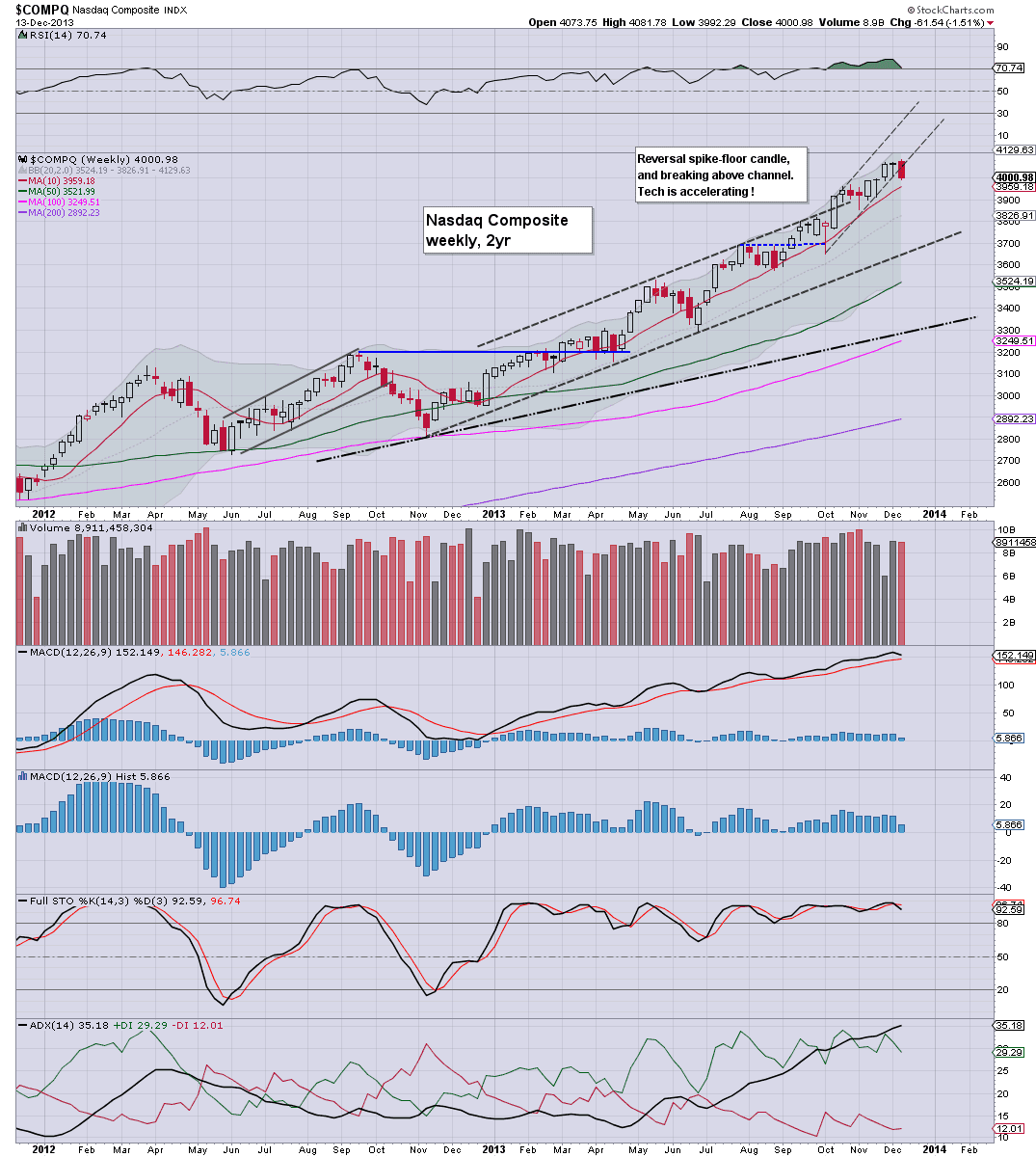 The composite lost -1.5% this week, but did manage another weekly close in the 4000s. We have a break of the accelerated upward trend...so the bears have something to be curious about. MACD cycle is set to go negative next week, and the bulls really do need to hold the 4000s. Best case downside is 3900, which is a mere 2.5% lower, and would equate to sp'1760/50s. 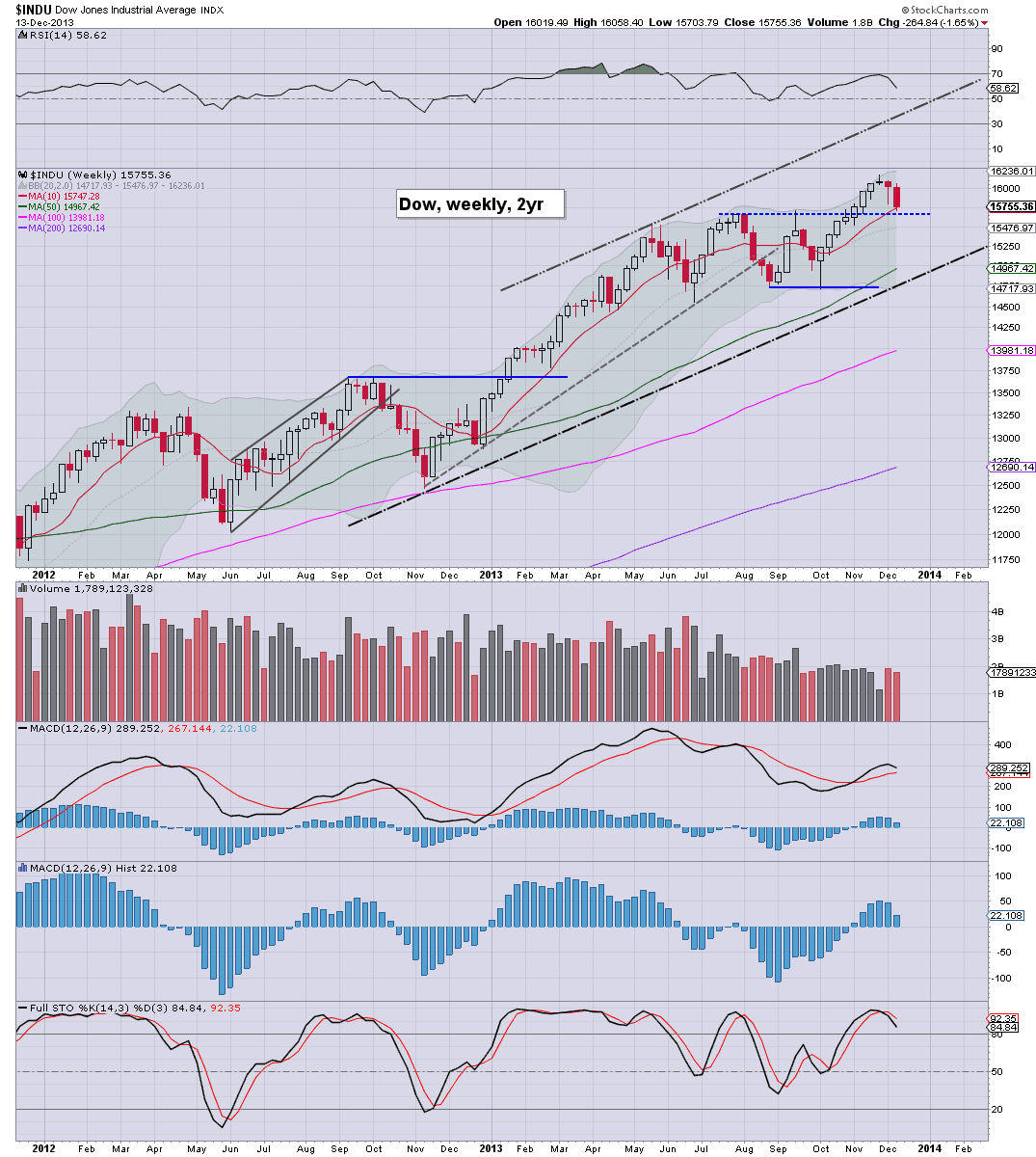 The mighty Dow slipped 264pts, but is arguably still above the old trading range ceiling - depending on how you define the line/breakout. A weekly close <15675 would open up the 15300/200 zone by year end. Frankly though, that only seems viable if the Fed cut QE at the next FOMC, and I don't see that happening. 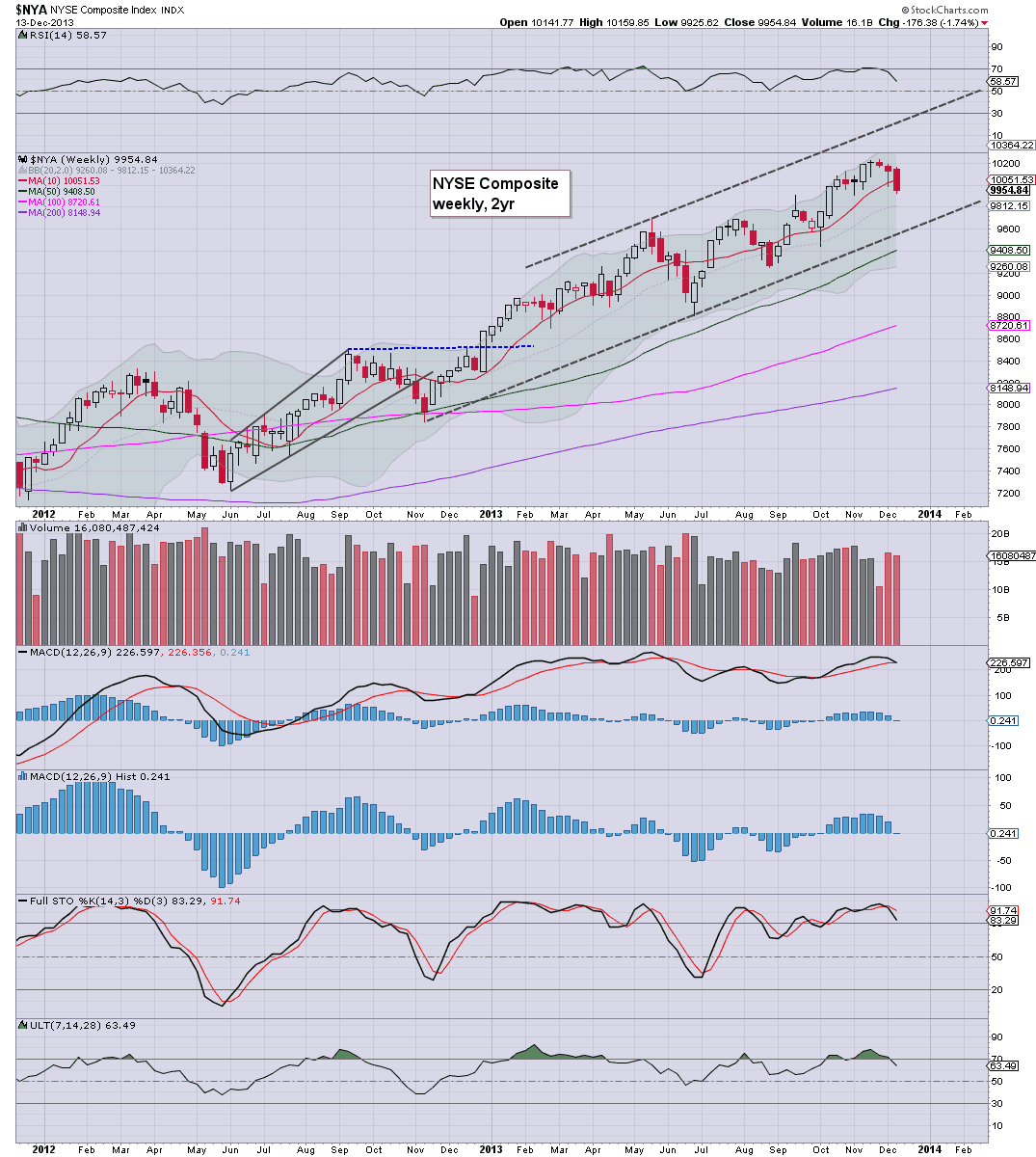 The master index fell -1.7%, and put in a rather bearish close under the weekly 10MA. This was the third consecutive weekly decline, and is probably the most bearish chart out there right now. Most bearish downside would be the 9700/9600 zone, just above rising support from Nov'2012. 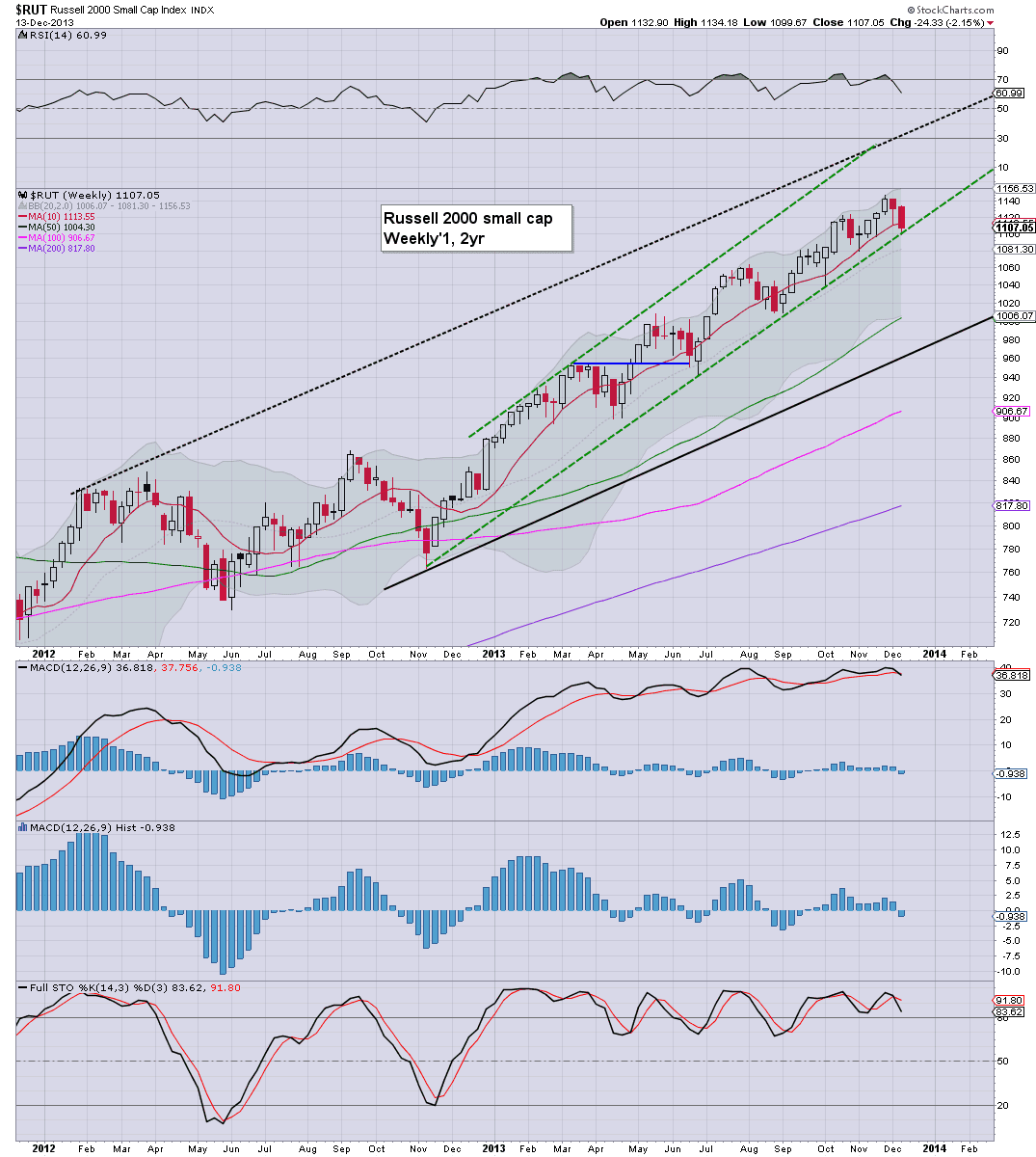 The second market leader fell -2.1%, and barely managed to hold the 1100s. Indeed, the R2K is sitting right on the powerful ascending trend, that goes back all the way to November 2012. If the Fed upset the market at the next FOMC, equity bears should seek a decisive break into the 1090/80s, which would open up further more significant downside - to around 1000, which is almost 10% lower. 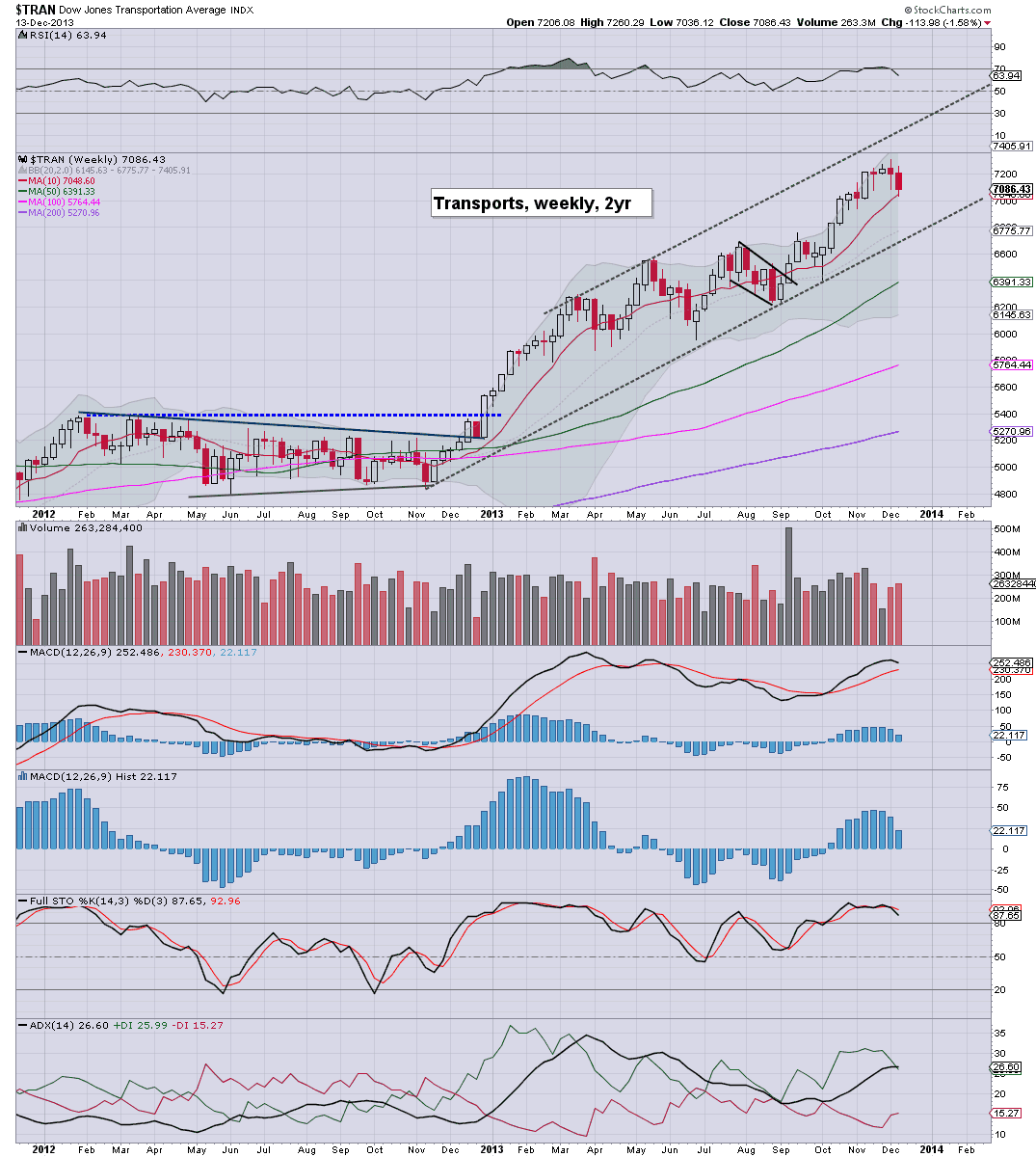 The old leader, Transports, fell for a second week, but managed to just hold the 10MA..along with the big 7000 psy' level.  Equity bulls could count the past 3-4 weeks as a sub'4 of a larger 3 wave - that stretches back to September. Certainly, price momentum is swinging away from the bulls, but for now..the primary trend remains to the upside.

So..the first decent weekly decline since August. Without question, there are some real signs of weakness out there, but the market has ramped so much this year, these recent declines are largely irrelevant in the bigger picture.


Holding to further upside into spring 2014

Baring a policy change from the Fed next week..along with a break of the 50 day MA - which will be around sp'1763 next Monday 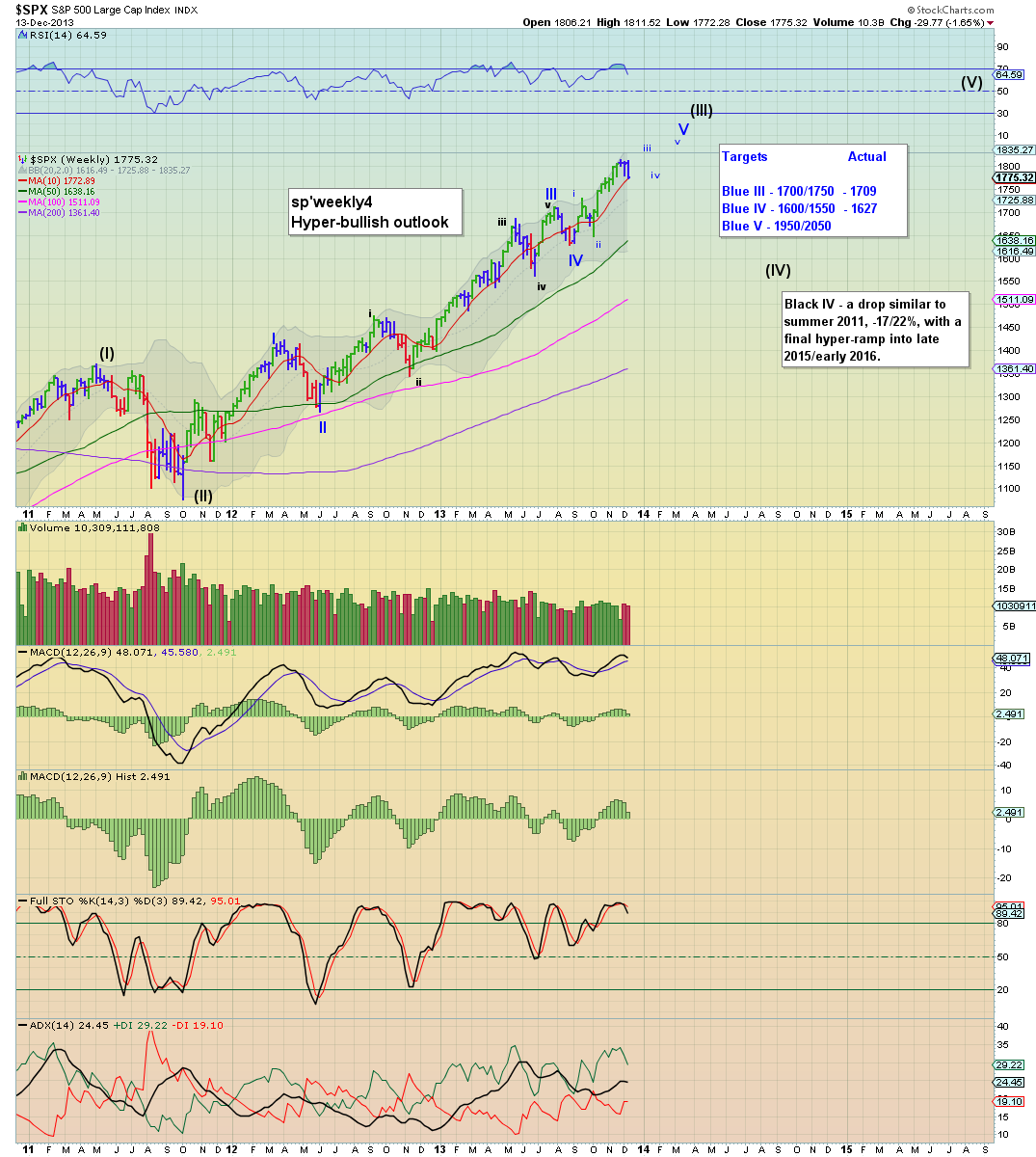 My best guess is that we just saw a micro sub'4 of Blue'3..which itself is just a tiny part of bigger Black III - due to conclude late next spring - target zone 1950/2050. However you want to count this nonsense though, the primary trend remains to the upside.

There is a fair bit of econ-data next week, but infinitely more important will be the Fed, with the FOMC announcement due on Wednesday at 2pm. The week concludes with Quad-opex, and it should make for some pretty serious price chop.


Last full week of the year

The coming week will be the last full trading week of the year. The following Christmas week is closed for 1.5 days, and will no doubt be extremely quiet.

As for QE-taper next week, I could list a hundred reasons why the Fed won't announce a policy change next week. Suffice to say...if they did, I would be extremely surprised. The mainstream media have been incessantly touting a reduction in QE across almost the entire year, I'm pretty sure they'll be doing the same for much of 2014.

The broader trend remains to the upside

Across the week, the sp'500 fell -1.65%, which was the biggest decline since late August. Despite the last few weeks of choppy weakness, the broader trend remains strongly to the upside. Baring a policy change by the Fed, the market looks set to close the year in the sp'1830/50 zone. 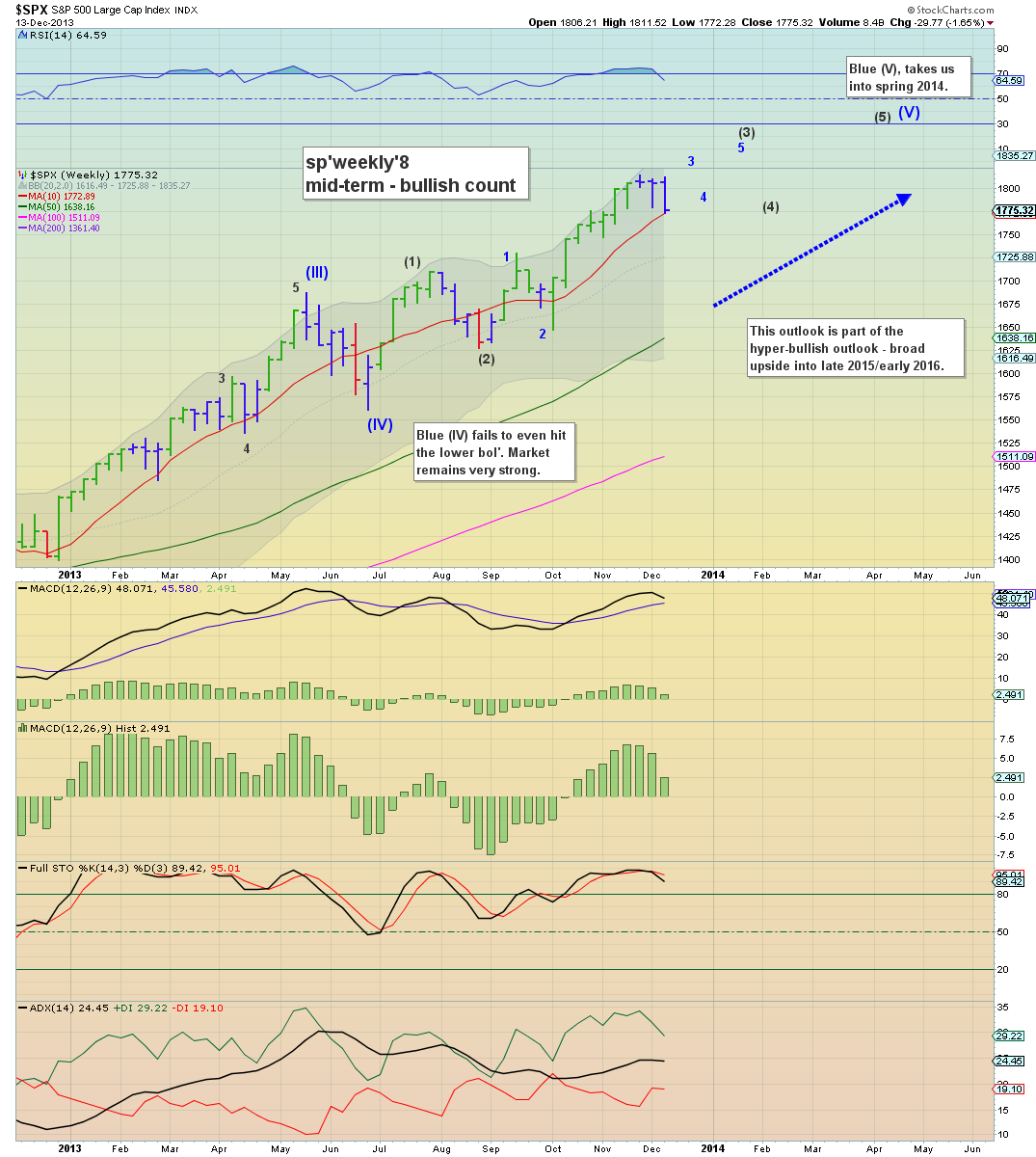 No doubt there will be a lot of bearish posts across the net this weekend.

I can only suggest everyone take a few minutes to just stare at the above chart.

We now have 3 consecutive blue candles on the rainbow chart. As I like to think of them, the blues are often warnings of trouble...but in this QE-fuelled market..such warnings are usually just a tease to the bears. Across this year we've seen a fair few weekly declines..but the market has always quickly recovered.

Baring a change in Fed policy next week, I'd have to assume the market will climb into year end.

Equities battled hard to hold the sp'1772 low, with the sp' closing -0.2pts @ 1775. The two leaders - Trans/R2K, both settled higher by around 0.4%. Near term outlook is moderately bullish into next week, the only real threat to the broader up trend is the Fed changing policy next week. 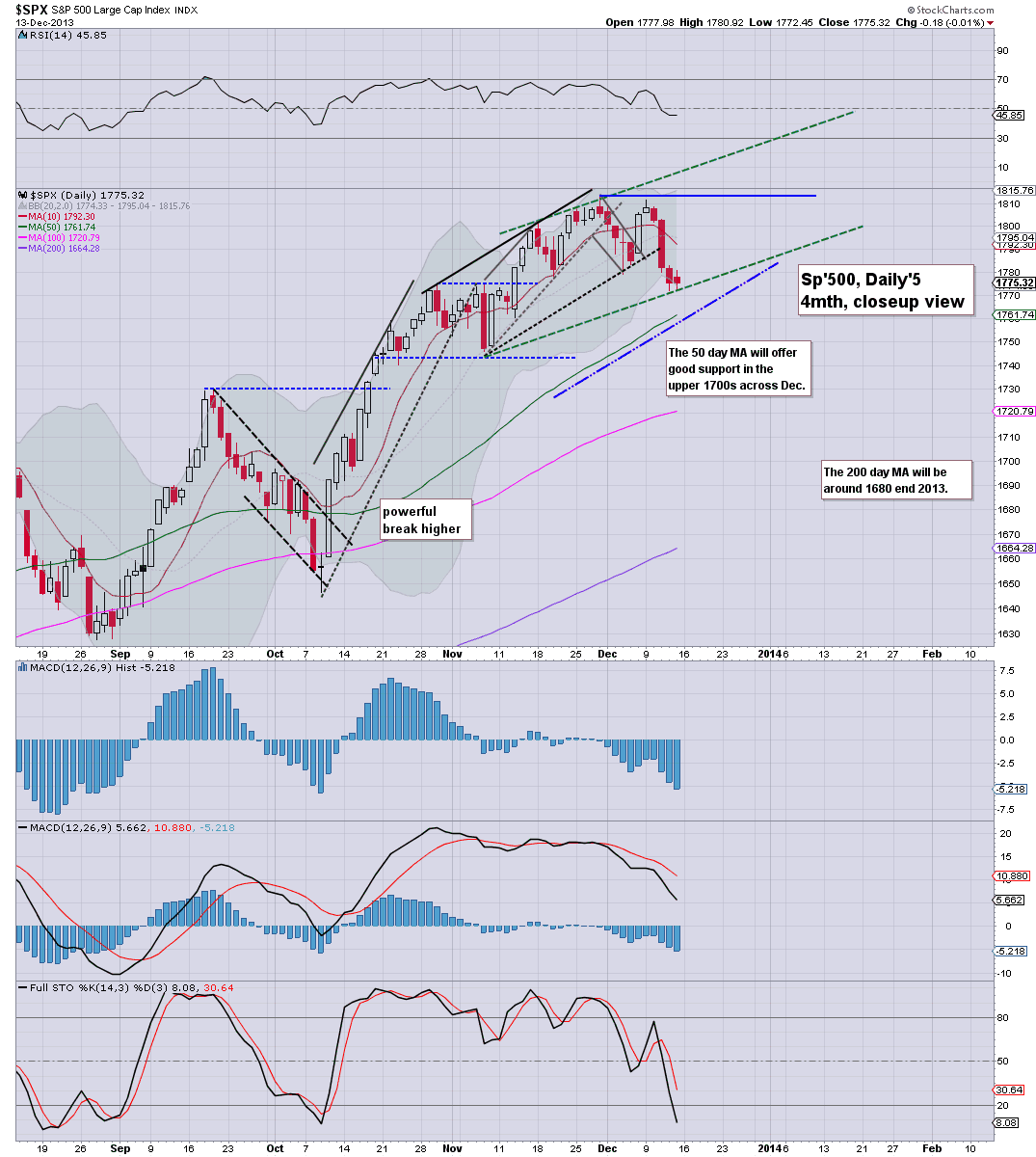 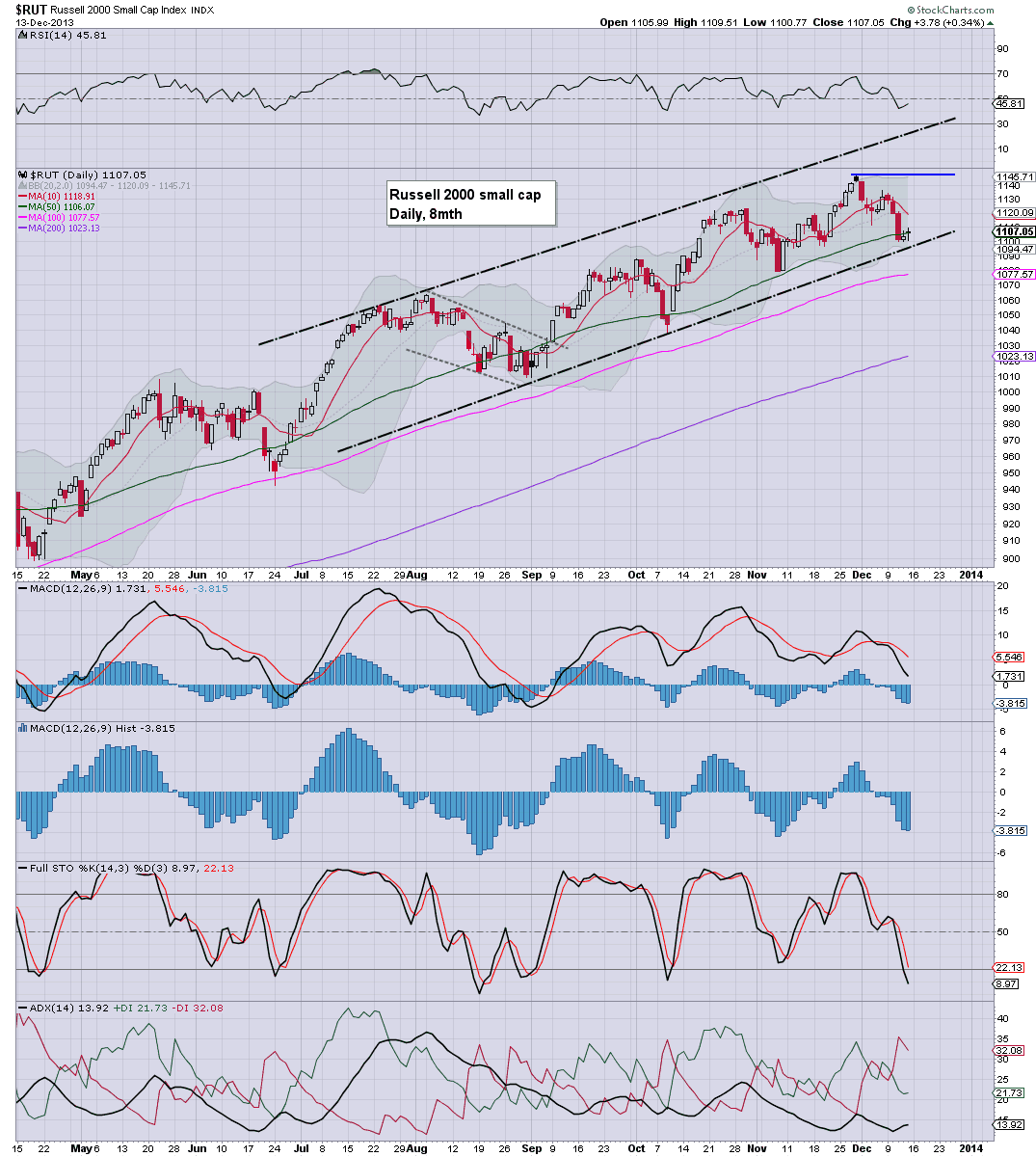 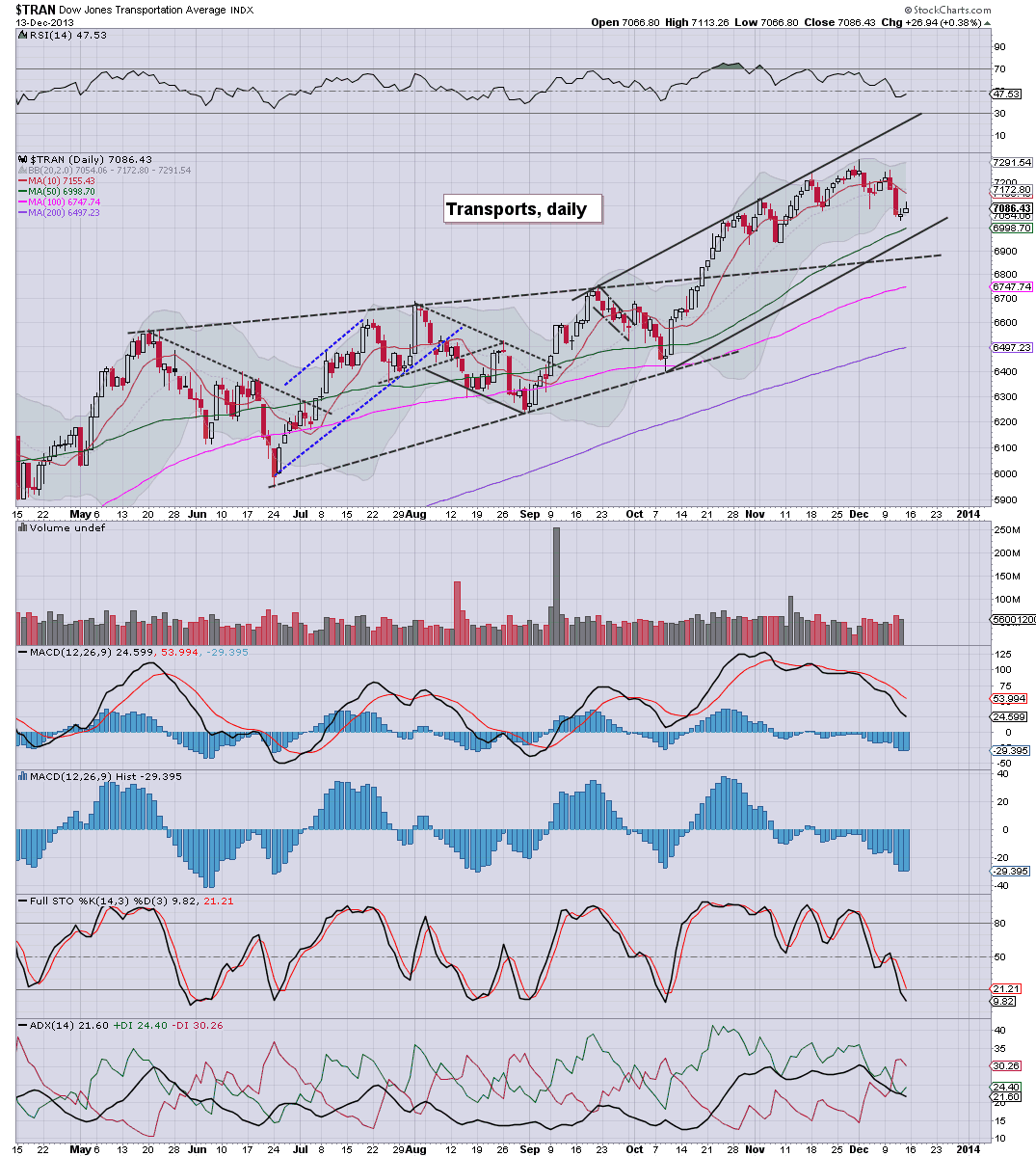 So..another week comes to a close. It is especially notable to see the two market leaders close the week on a slightly upward note. Indeed, that makes two up days for the Transports and the Rus'2000.

The sp'500 looks set for a new wave higher next week..and baring a decision by the Fed to cut QE ahead of the Christmas holiday - a decision I do not believe likely under any realistic scenario, the market should climb into the 1800s next week.

Regardless of how you might like to count the waves...the primary trend remains unquestionably to the upside.