With the main indexes closing somewhat mixed, the VIX itself traded within an extremely narrow range today. From minor gains of +1%...the VIX closed -2.3% @ 12.64. The VIX is now very close to the 11s, which would again be a reflection of what remains a fearless market. 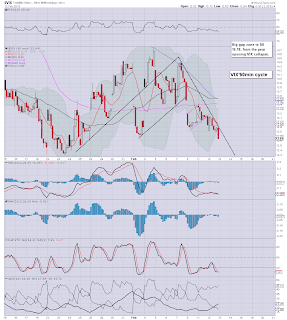 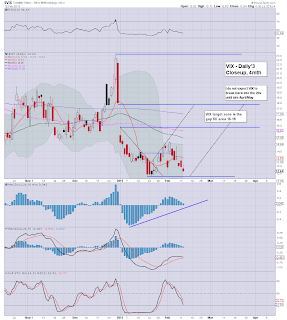 The daily VIX chart illustrates how after a small rally to the upper 14s..the VIX is almost right back to where it started.

I suppose some could say that the VIX is holding a higher low, whilst the indexes are pushing to higher highs, but really.. no. I can't consider anything like that as remotely suggesting the VIX is going to surge in the near term.

As things are, the VIX doesn't even look like its going to break into the lower end of the 16-18 gap zone. Perhaps equity bears will have to wait until late April/May ?

Another somewhat quiet day in the US markets. Yet the bulls can tout another higher high. With dollar weakness, and the VIX closing in the 12s, this market is fearless..and frankly..disturbingly bullish. 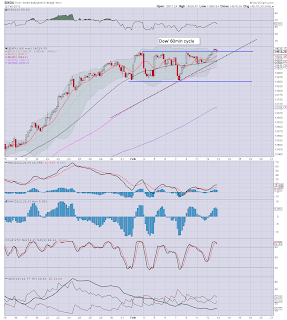 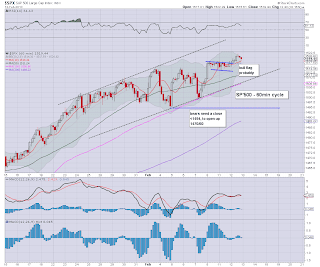 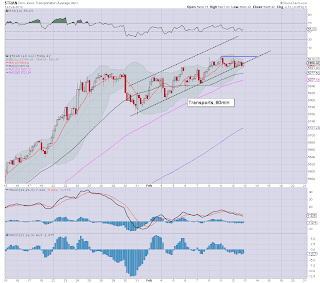 Primary trend remains UP. Its that simple.

I just can't see how we'll get any 'significant' pull back - greater than 2-3% in the short term, whilst the POMO program continues.

That trading period remains one of the most nightmarish, and yet..so few seem to be highlighting it. Have the bears forgotton so easily?
--

Bit and pieces across the evening.
Posted by Trading Sunset at 21:02:00
Email ThisBlogThis!Share to TwitterShare to FacebookShare to Pinterest

Mr Market is again a little exhausted after hitting sp'1522, a level virtually no one foresaw a mere six weeks ago. The small 15/60min cycles do look kinda maxed out, there is easy room for a little downside to 1510 early Wednesday. 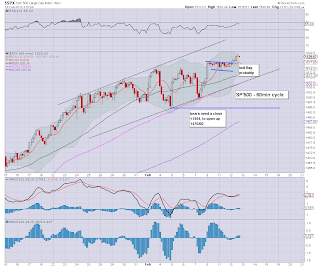 Not exactly exciting, is it?

No doubt, many are now sitting back, and waiting for his highness to issue some more proclamations later this evening. Perhaps..capital controls? 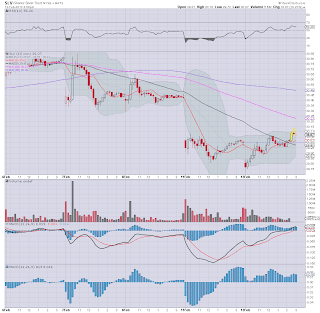 2pm update - another little up wave 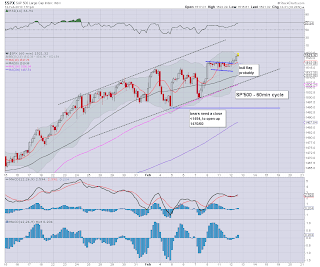 Very little of anything going on. Hourly cycles might be maxed out, but then...they already made a higher high.

Rising support is @ 1510 by end Wednesday..so bulls have a clear 10pts buffer..never mind the daily cycle which has 50pts buffer.
--

*Metals are still kinda weak, I'm watching them for a possible re-short. 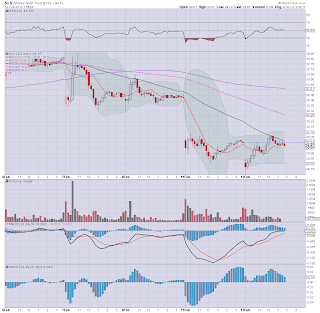 I'd prefer a re-short from 30.20/30, that won't be easy, with just 2hrs to go.
Posted by Trading Sunset at 18:57:00
Email ThisBlogThis!Share to TwitterShare to FacebookShare to Pinterest

Despite the very quiet market...sp'500 has again pushed to a marginally higher high. All momentum remains with the bulls, and with the Fed fuelling this market with 45bn a month of POMO, why does anyone think its going to stop? 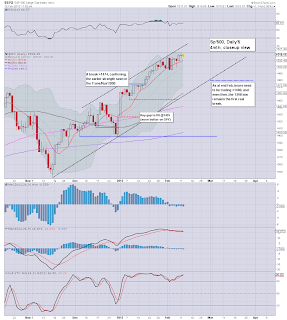 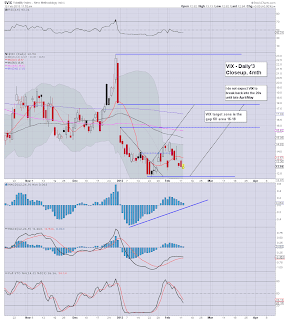 Metals off their earlier lows..as expected. I got stopped out at 29.80, and I'm pleased with that exit.  I might re-short silver later today, depends on price action...and my mood. 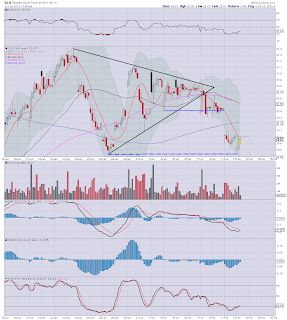 
VIX remains very low, and indeed, someone picked up a 'lottery ticket' VIX call block in the June 35s.

Good morning. Today should at least bit a little more dynamic in terms of price action. Perhaps we might even fall 0.5%..at some point. Ohh..the drama! Dollar is a touch weaker, along with the metals...with VIX 1-2% higher. Overall though, its still kinda muted action. 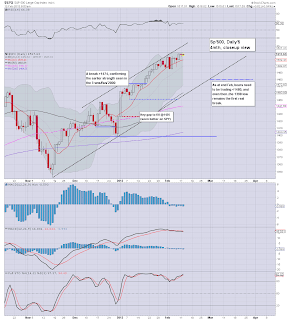 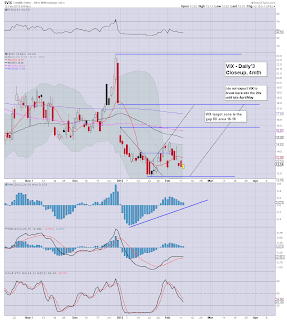 It feels like we're stuck..but really...nothing has changed. There is no reason to believe the rally is ending.

With his highness due to speak later anyway, would they ever let this market stay red for more than 30 minutes?

*stopped out of my SLV short position in the opening 20mins. Might go back in later...not sure yet.
--

back 12pm
Posted by Trading Sunset at 15:00:00
Email ThisBlogThis!Share to TwitterShare to FacebookShare to Pinterest

The US dollar index is just 69bps away from the important 81.0 level. A weekly close in the 81s would be a major recovery from a three month decline, and at least become 'some' amount of downward pressure on US equities. 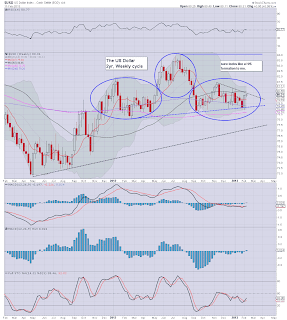 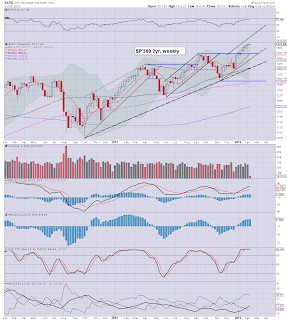 Just a brief update on the USD and the weekly index cycle.

First, its important to note the MACD (blue bar histogram) cycle which is now positive for the first time since last July. The USD 81s are indeed important, but dollar bulls should be seeking 81.60..and higher - breaking back above the November high.

If we see 82s at any point, the door opens to a considerable multi-month ramp, at least to the 83/84 level.

--
As things are, the weekly MACD cycle on the US indexes is looking kinda toppy, but there is major support at the old resistance/high of 1474.

Were the fed 'pomo' program to end this summer/autumn, I would again be open to a massive down cycle. Yet...the notion that the fed are ever going to end what was acknowledged by many as 'QE-without end' I find almost impossible to believe.

A very quiet Monday for the US market, with the main indexes closing largely flat.There is simply no sign of the broad upward trend ending. Even a move down to the sp'1470/60s would do no damage to what remains a powerful multi-month move higher from the post election low of 1343. 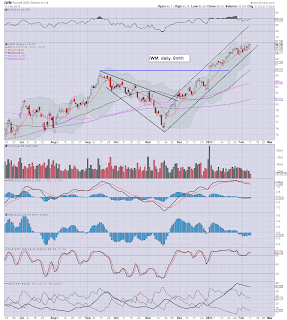 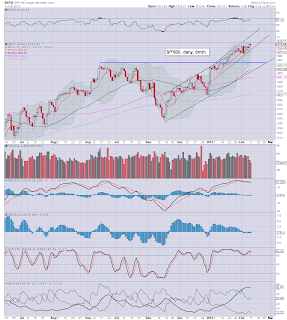 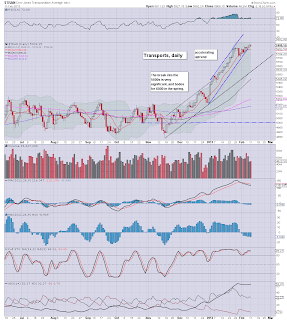 A pretty dull Monday, but then...aren't they usually that way?

There is little to be said, other than the primary trend remains UP.

What should make the bears thoroughly despondent right now is that the underlying MACD (blue bar histogram) cycle on the daily charts is already negative.and looks like it could be flooring!

There is the very real possibility of a 7-10 day up cycle to begin as the week progresses.

*huge POMO of 5-6bn this coming Thursday, and it will be interesting to see if this Valentines is indeed a massacre for those on the short side.