July saw the fifth consecutive net monthly gain for some US equity indexes. August has already seen a new historic high of sp'2182, with the Nasdaq comp' set to break the July 2015 high of 5231. The US market looks set for broad upside into spring 2017. 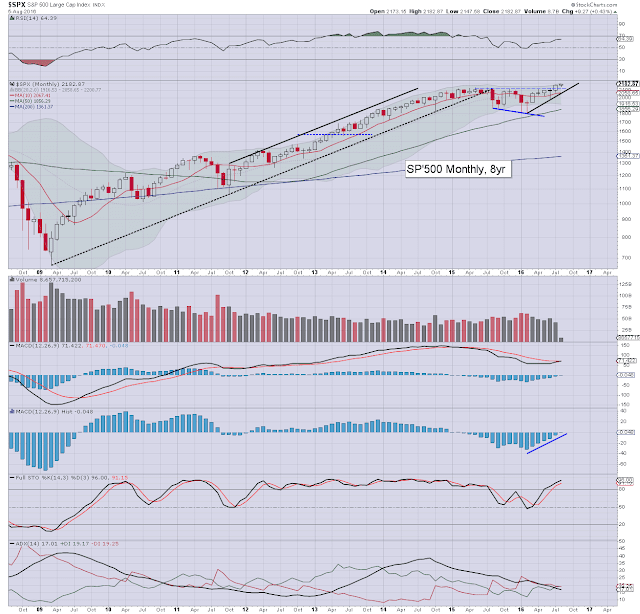 The Friday close of 2182.87 made for a new historic high. As things are, it would seem the sp' will manage another net monthly gain for August, if not also September.

Underlying MACD (blue bar histogram) continues to tick higher, currently at -0.048. That makes for MARCON 6. By end August.. or certainly the Sept 1st open, MARCON 7 - a 100% bullish market, will be due. 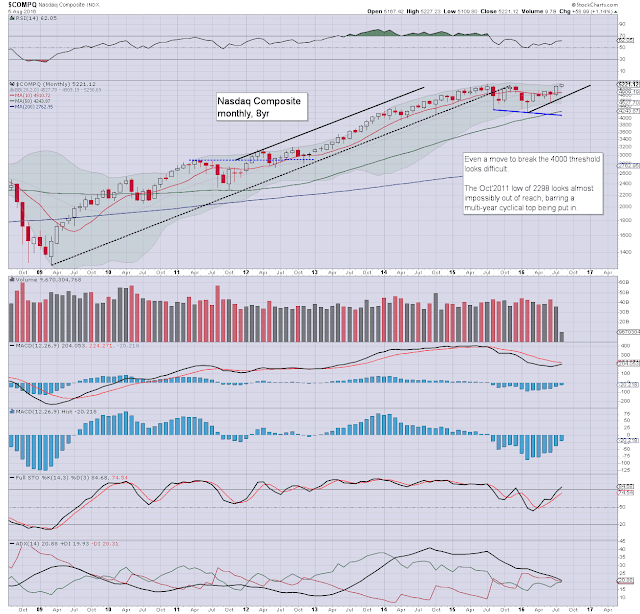 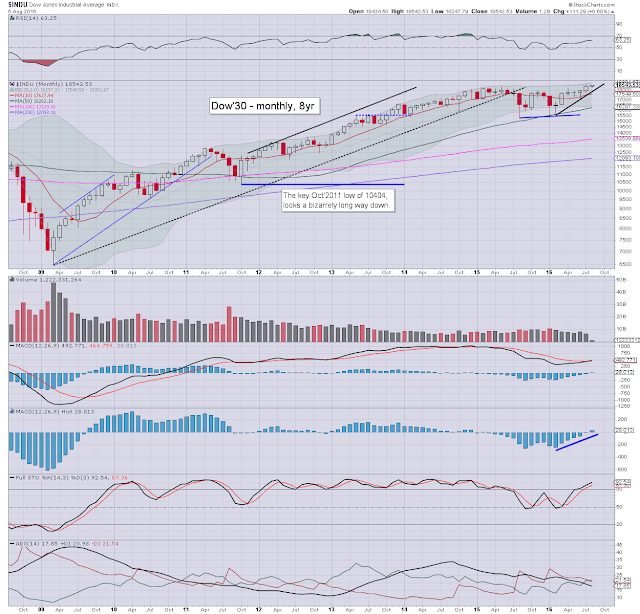 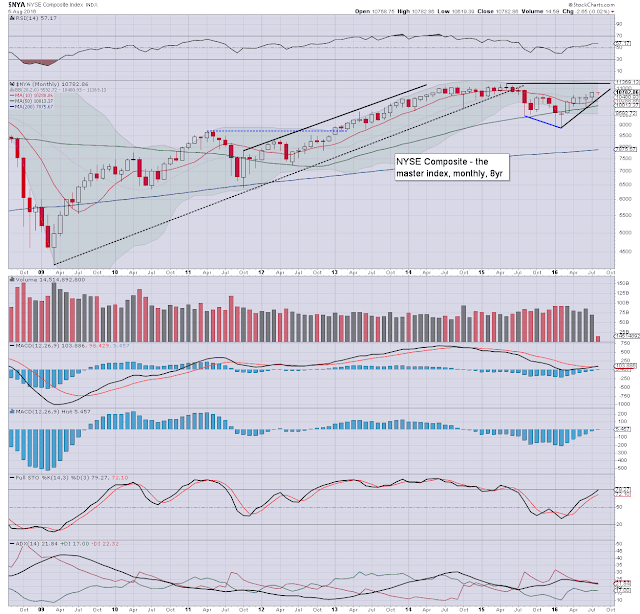 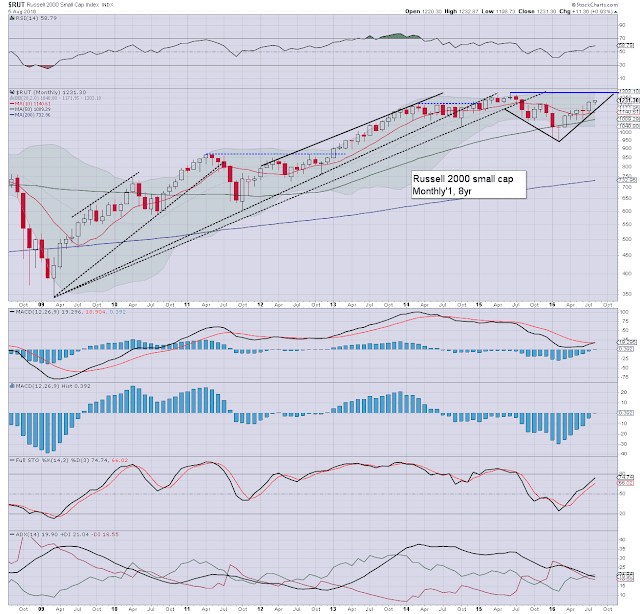 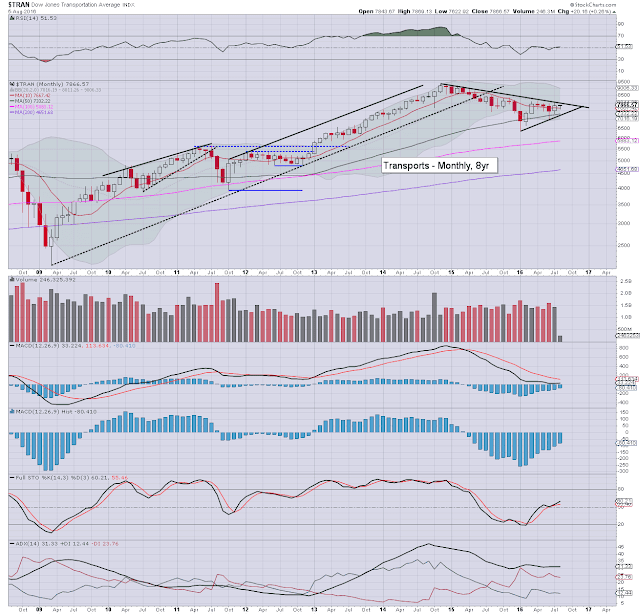 The 'old leader' - Trans, continues to struggle. First resistance is the 8K threshold. By late autumn/early winter, secondary resistance will be the 8300/500 zone. A year end close >9k looks out of range... not least if Oil prices break back above $50.. which would be inherently bearish for transports.
--

The sp'500 and Dow have broken their 2015 historic highs, with the Nasdaq set to follow.

There are a few more earnings to appear - notably Disney (Tuesday, AH), but other than that... a relatively quiet week.

*no fed officials are scheduled to appear.
--


If you have valued the posts on these pages since Feb'2012, then can you support me via a monthly subscription, which will give you access to my continuing intraday posts.

--
*the next post on this page will appear Monday at 7pm EST
Posted by Trading Sunset at 17:00:00
Email ThisBlogThis!Share to TwitterShare to FacebookShare to Pinterest 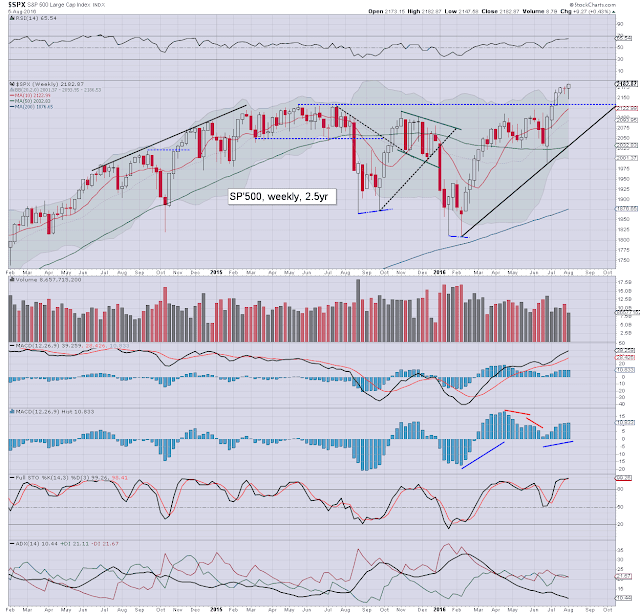 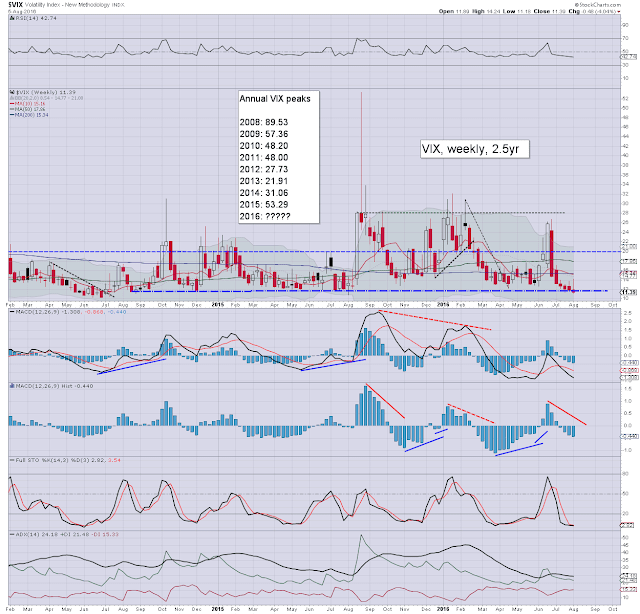 The week ended on a very positive note, with a new historic high for the sp'500.

There is simply nothing bearish in the US - or most world markets, and its laughable how the market didn't even retrace to the sp'2130s this week, and instead made a spike floor from 2147.
-- 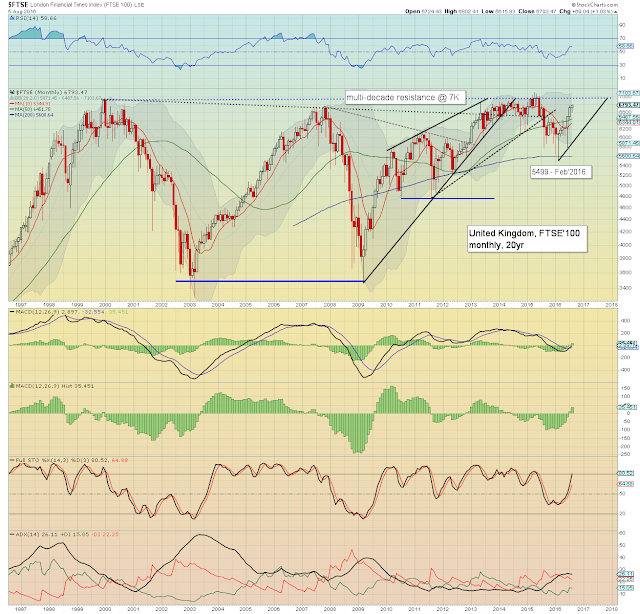 The giant multi-decade resistance threshold of 7K is set to be challenged later this month. Any monthly close >7K, would bode for broader upside to at least 9/10k.

If you believe the next bear market will also be on the order of 50%, then a basic upside target of 14/15k is necessary... in order to back test the 7K threshold. On that scary thought...

*the weekend post will appear Sat' 12pm EST, and will detail the US monthly indexes
Posted by Trading Sunset at 00:00:00
Email ThisBlogThis!Share to TwitterShare to FacebookShare to Pinterest
Newer Posts Older Posts Home
Subscribe to: Posts (Atom)