Bits and Pieces for Good Friday

With the world's most twisted and rigged casino closed for Good Friday, its time to use the opportunity to have a look at a few random things. 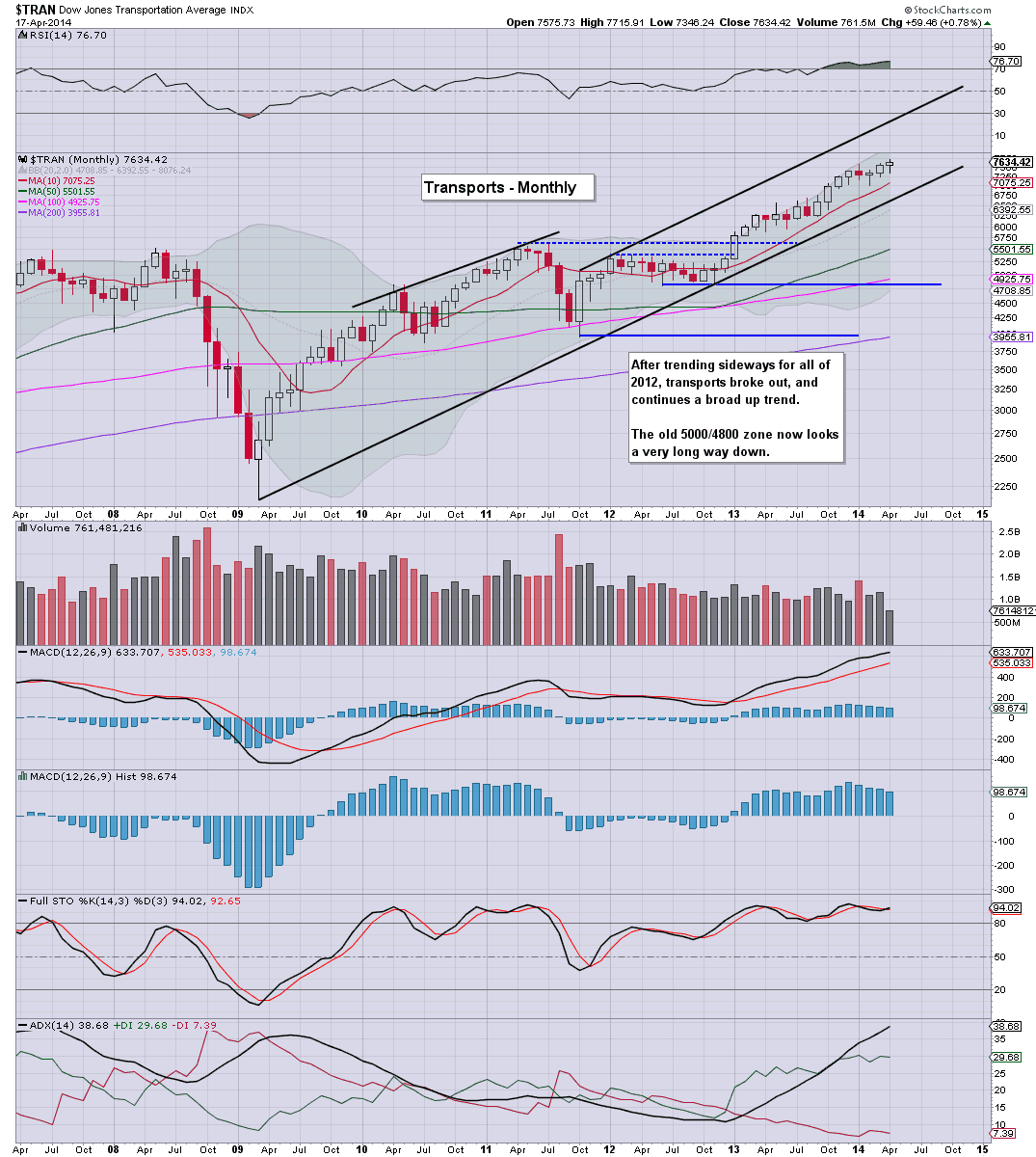 The recent equity weakness is hardly noticeable on the Tranny. Even though the MACD (blue bar histogram) cycle is ticking lower for the fourth consecutive month, prices are still rising. The rising 10MA, in the low 7000s is key support. Until the bears can get a monthly closing under 7K, there is little reason to get overly excited. 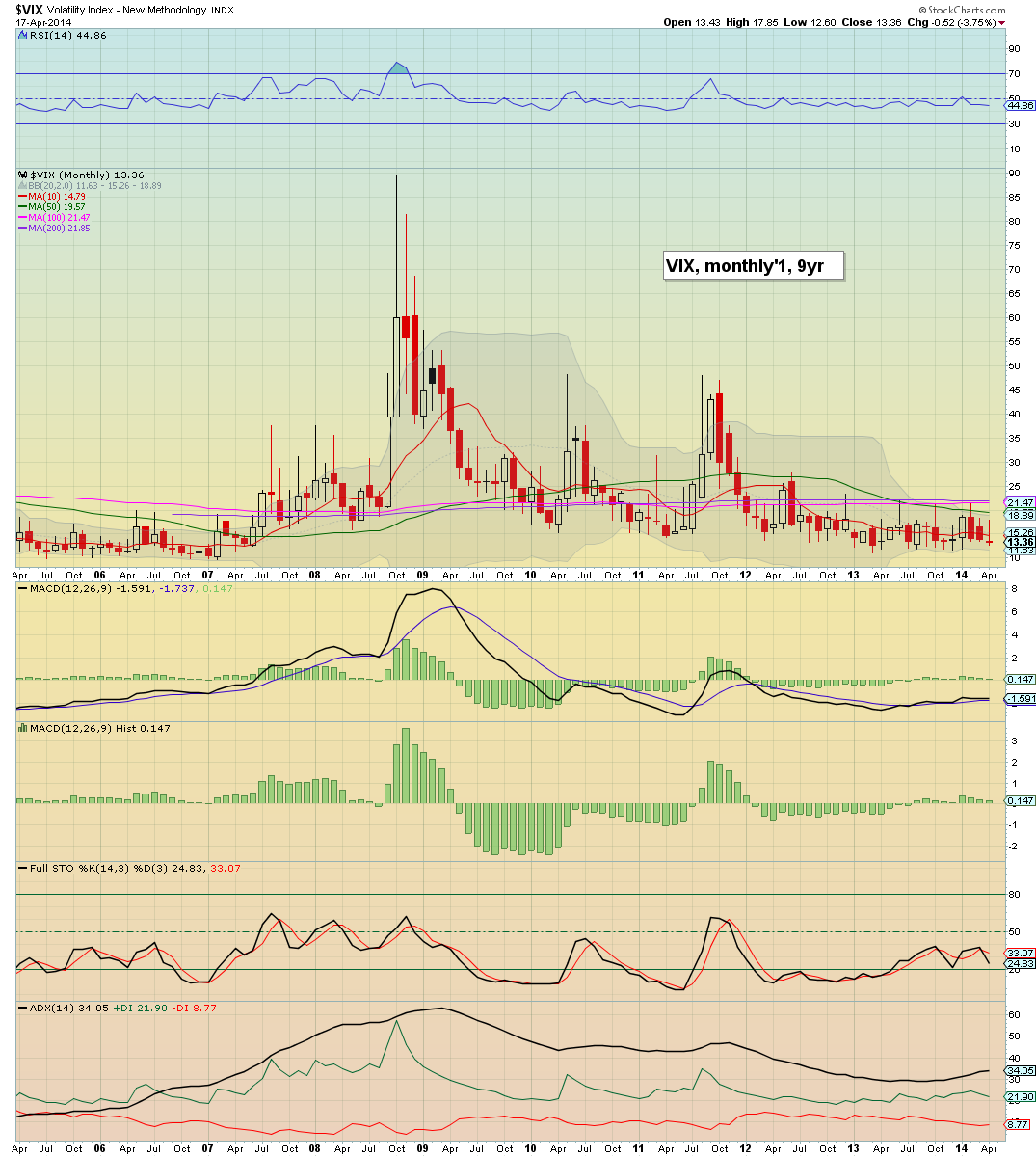 What has probably bemused many of the permabears across the last two years is the low VIX. 2012 saw a high of 27, whilst the 2013 high was a mere 21. The bears can at least tout that we have already seen 21s this past January, so there is a hope that we'll at least break into the upper 20s at some point this year.

Perhaps most notable, are the super tight bollinger bands on the monthly VIX chart. It is very much the price action seen from 2004 to 2007. My concern is that we will see another year of this low VIX before the next economic cycle concludes. 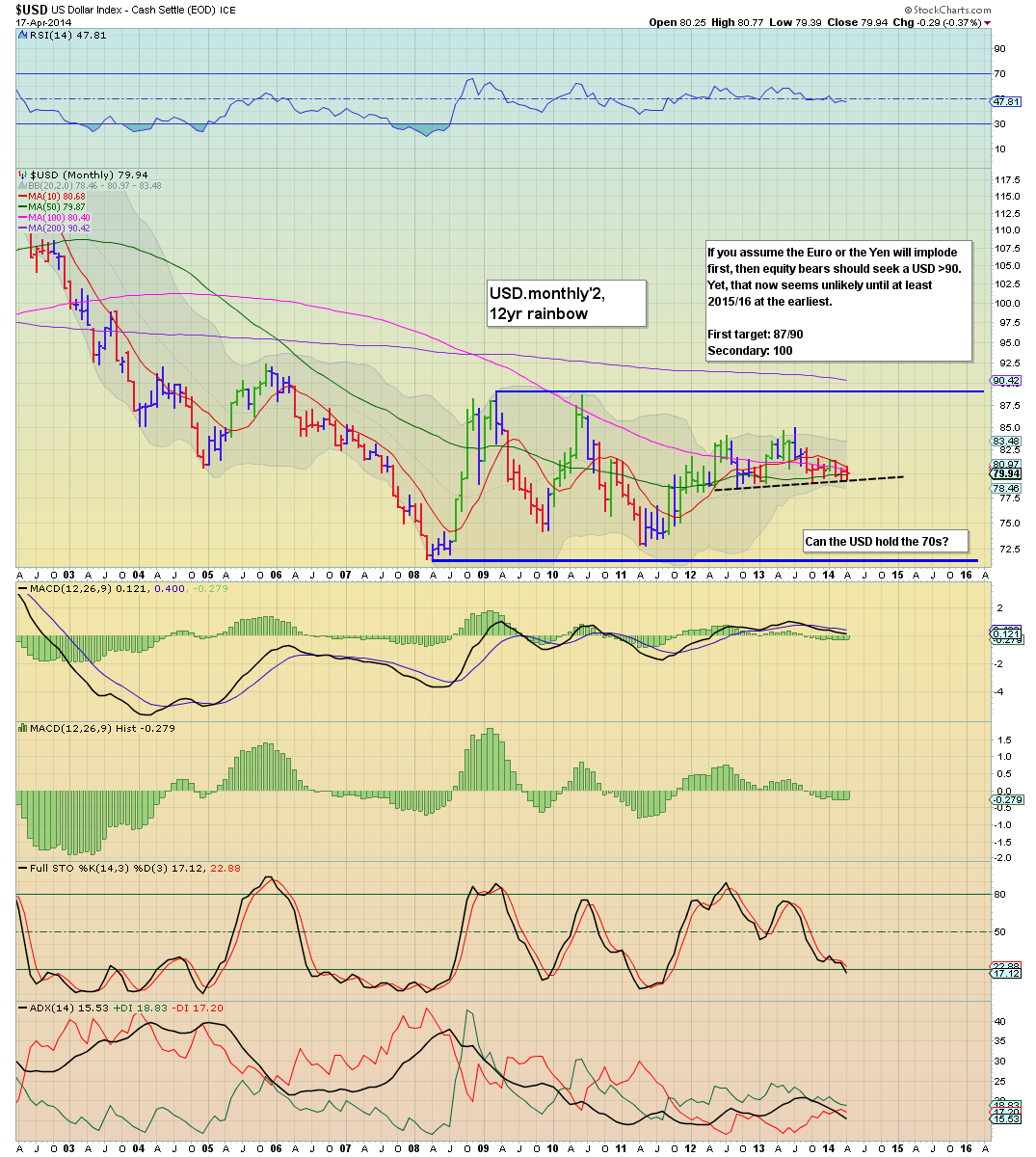 King dollar remains.. King, despite what some of the doomers might wish to believe. Yes, we're stuck in a very tight trading range, and if we go much below 79.00, then the door is open all the way to the 70.00s - the ultimate support line.

As it is, the underlying MACD (green bar histogram) looks prone to a big move to the upside. The cycle looks pretty floored to me. If there was a turn, it'd likely take 2-3 months to become clear.

Without question, I am bullish USD. I just can't take other currencies like the Euro..or worse..the Japanese Yen seriously. Both of those look set to implode - or at least devalued via printing, before the USD. 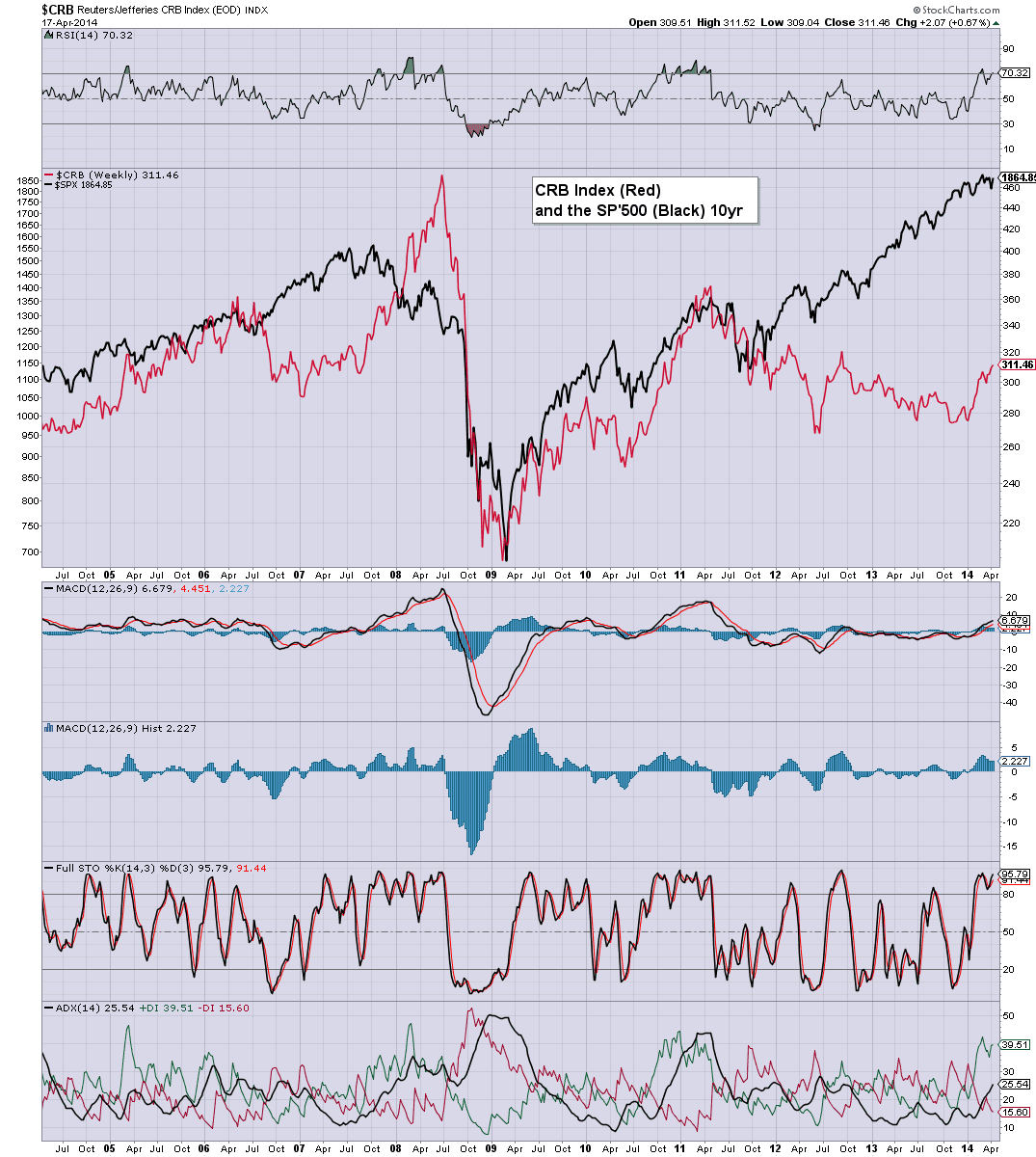 The gap between the CRB and SP'500 is finally closing. I suppose its possible - at least for those who are suggesting equities are near a multi-year top, that the current commodity rise is similar to that seen in mid'2007. Using that analogy, equities max out in 3-6 months, and commodities reach a peak in mid 2015. I could certainly be open to that scenario.

First, from Mr Walker, what is surely the weekend update...

A little chatter from Mr Hunter

--
more later (probably)..in the evening
Posted by Trading Sunset at 15:35:00
Email ThisBlogThis!Share to TwitterShare to FacebookShare to Pinterest 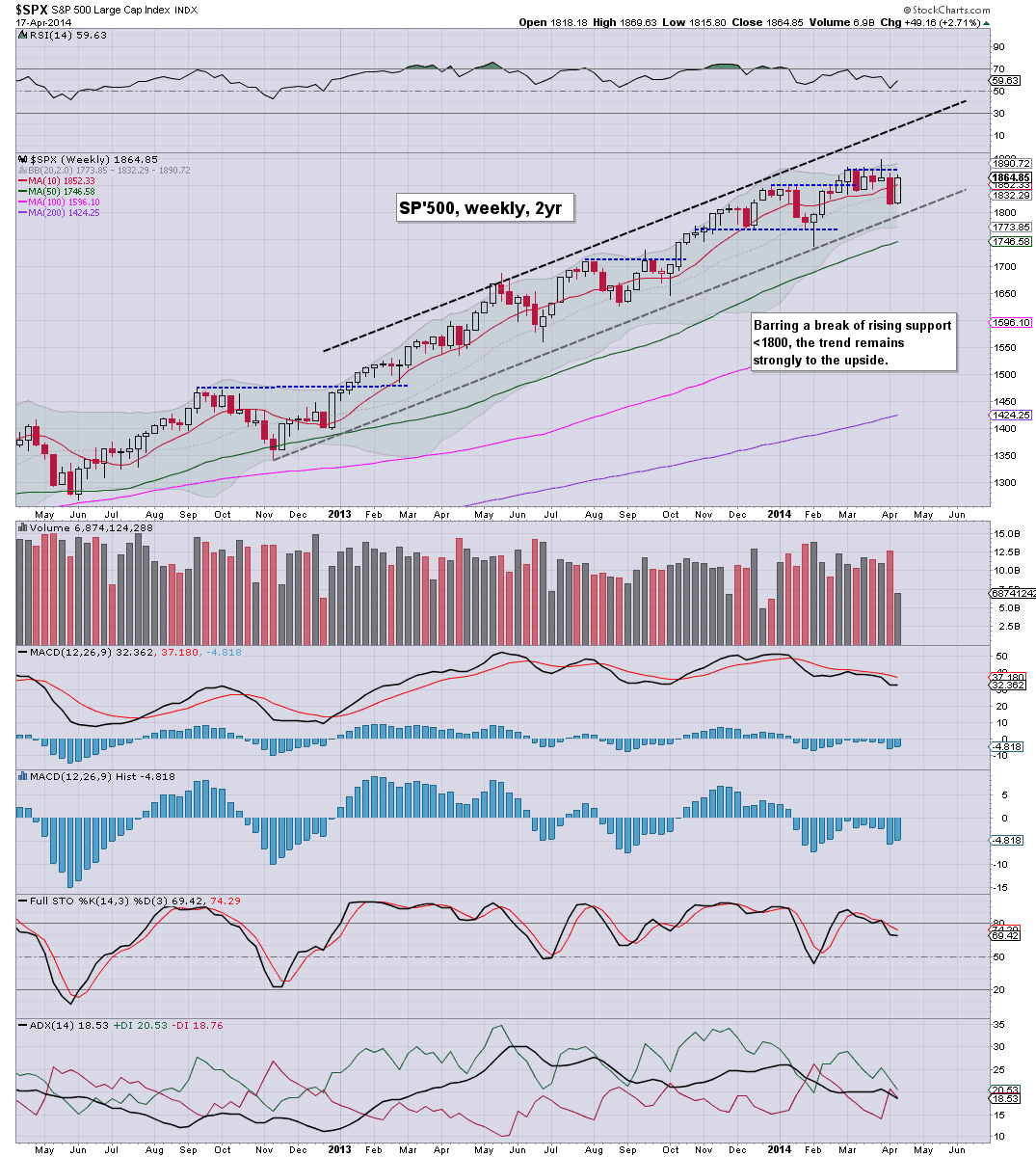 The above chart is a stark disappointment to me. Even though (for once) I didn't get nailed on the market rebound (I bailed like a maniac at sp'1816 on Tuesday at 3.10pm or so), I'm still disheartened though, that another down wave just didn't meet expectations.

We've not seen a 10% decline in the headline indexes since the key floor in Oct'2011. One is coming, and I sure pray it is this summer!


Permabear on the air?

I am thinking of doing audio/video postings at some point.... gods help us all! I am already overloaded by my regular postings, but maybe I'll find some time this weekend, at least for an audio posting.

I also have ideas to maybe arrange an online chat/ Google hangout..or something like that. I've many ideas, I'll try to make some progress in the weeks ahead.

--
Posted by Trading Sunset at 04:00:00
Email ThisBlogThis!Share to TwitterShare to FacebookShare to Pinterest

US equities closed moderately higher, sp +2pts @ 1864. The two leaders - Trans/R2K, both settled higher by around 0.5%. There is a small chance of a minor retrace back to the 1850/45 zone early next week, but Mr Market is more than likely to surpass the recent 1872 high. 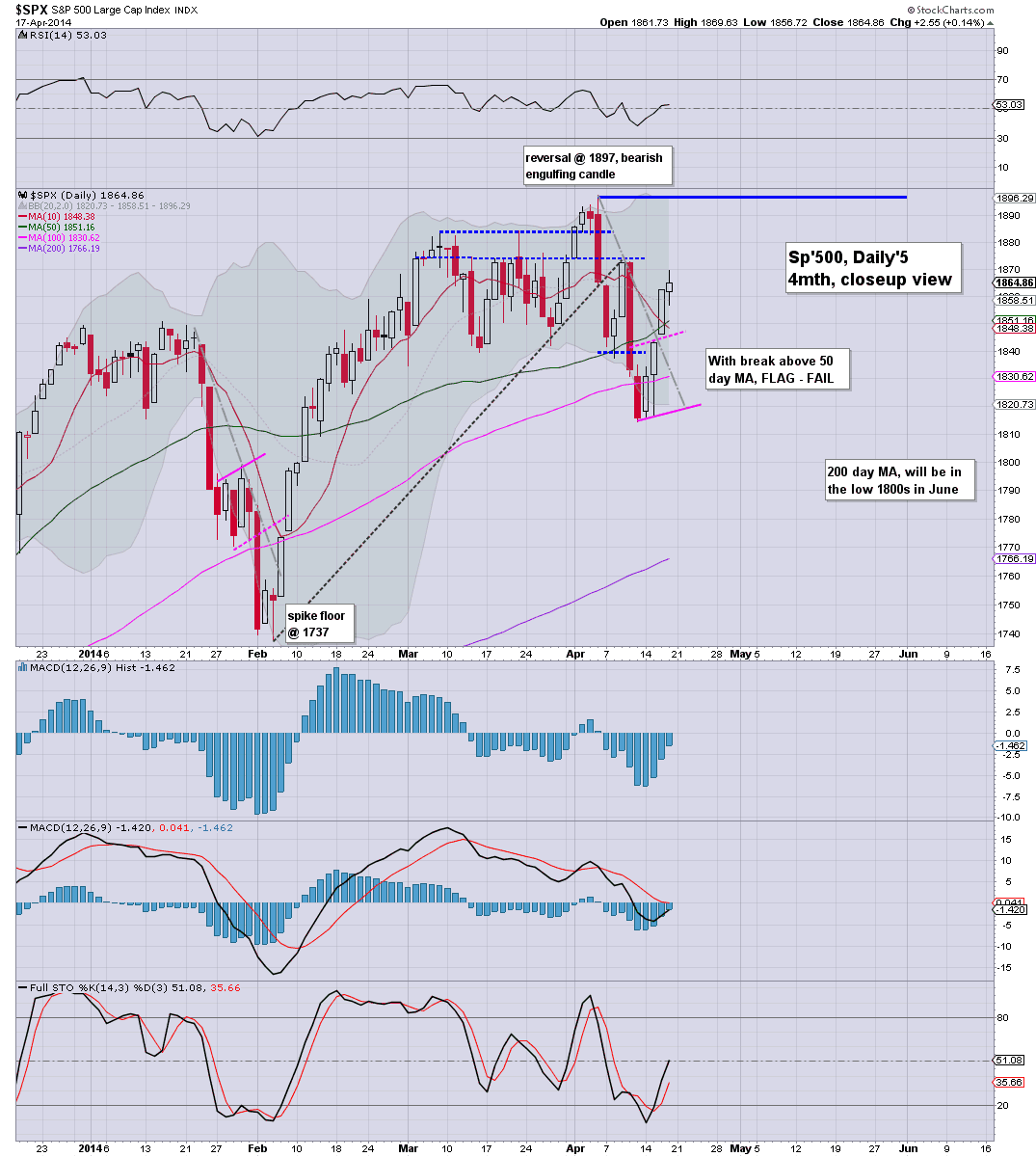 Bizarrely, each day of this week has closed net higher, even though Mon/Tuesday actually felt like major weakness.

It remains an incredibly strong market, and with the break above the 50 day MA - at least for the sp'500, I'm resigned to new index highs (at least in the Dow, Sp) in May.

The only thing that would make me reconsider is a break <1814, and frankly, that seems very unlikely.