After some weakness in May/June, the world equity indexes are generally still battling to the upside. The strongest markets remain the USA and Germany, whilst Greece, Italy, and China continue to struggle. Baring an end to QE, further upside into 2014 is expected.


Lets take a look at ten of the big national indexes 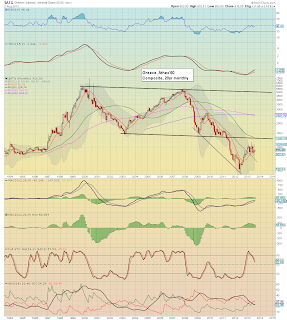 Having broken the declining trend from the 2008 collapse, the Greek index is clearly trying to stage a fight back, but is currently stuck under the big 1000 level. Underlying MACD (green bar histogram) shows weakening upside momentum. Baring a break >1500, I can't see the Greek market as anything other than 'dead man walking'.

With the Greek economy effectively already collapsed, this basket case merely remains an example of where Spain - and much of the EU is eventually headed. 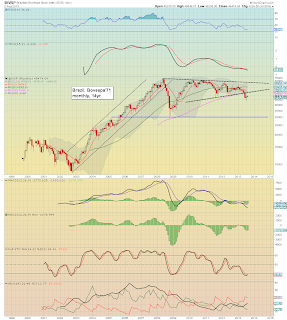 Since the June snap to the downside, the Bovespa is trying to battle back, but the longer it remains under old support, the harder it will be to avoid much lower levels this autumn. For the Brazilian bears out there, next downside target is the 40k psy' level. After that, there really isn't anything until the 2008 collapse wave low of 30k. 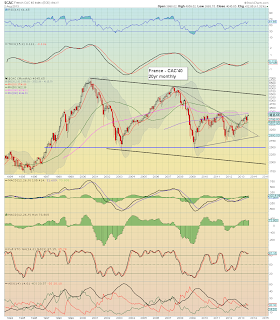 After some weakness in June, the French market is looking pretty strong. The next upside target is the rather obvious 5k level, and perhaps 5250/5500 by mid 2014.  Despite the underlying problems that the French political leadership are causing for the long term, the market trend is clearly headed to the upside. 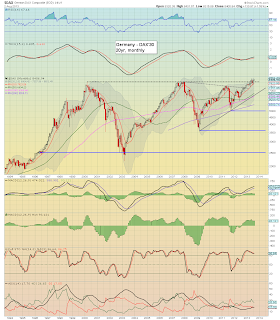 The economic powerhouse of the EU, the DAX remains comfortably above the old 2000/2007 peaks. There is nothing bearish here, and the next upside target should be the big 10k level, although that doesn't seem viable until spring 2014. 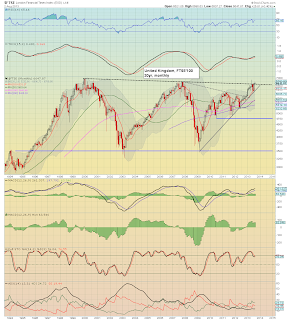 To have some confidence in the UK market, bulls should be seeking a few monthly closes in the 7000s. That will clarify the mid-term outlook, and should open up 10k in late 2014/2015. 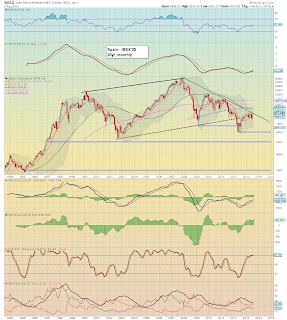 The ugliest of the two biggest EU PIIGS, the IBEX is finally starting to break out of the 2008 collapse wave down trend. There is pretty easy room to 9k, and the bulls should be seeking a yearly close >10k.

Considering the underlying state of the economy, with unemployment set to stay above 25% until 2018 - according to the IMF, it is a wonder the Spanish populace remain so...subdued. For now, the jobless sheep seem very content to sit back quietly in the sunshine. 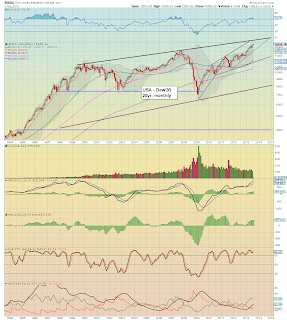 The mighty Dow continues to push higher, and the old 2007 high is slipping into the distance. However, Dow 16k doesn't look likely within the immediate term, but certainly, 17/18k looks a very reasonable target by year end - assuming everything 'just ticks along'.

The rising monthly 10MA is 14464, and should provide very strong support in the projected down wave into September.

For the longer term, so long as the QE continues, with the US Dollar remaining King in the FIAT currency world, along with large amounts of capital inflows from the EU and Asia, if there is one national market set to rise, it remains the US. 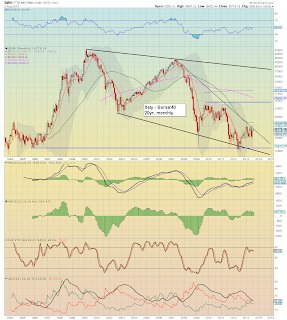 The other of the worst EU PIIGS, Italy is seemingly going to break the broader 2008 collapse wave down trend. Equity bulls should be seeking a break into the 18000s to have long term confidence of much higher levels across 2014/15. 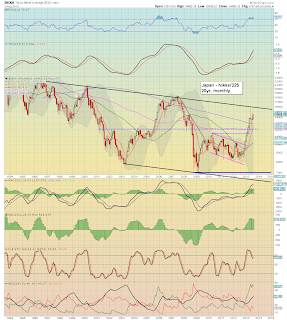 With QE continuing from the JCB, the Nikkei is battling back after its significant drop across May/June. For those bulls seeking a 'hyper-bullish' world market rally across 2014/15, look for the Nikkei to break >16000. That is only 10% higher, and if its achieved, there really isn't any ceiling to how high it could then go. After all, the QE won't stop, can't stop..and will probably be increased again sometime next year. 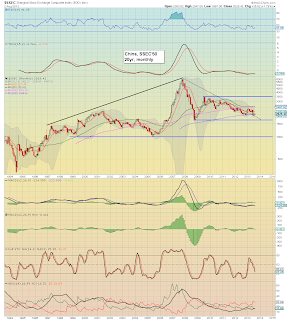 The mysterious China is really struggling, and is still down two thirds from the 2007 peak of the 6000s. Equity bulls should be seeking a massive ramp across 2014/15 to at least 3500, which is almost 50% above current levels.

The little wave lower seen across the world markets in May/June is becoming something of a fading memory. What is pretty clear, baring an end to QE - not just in the USA, but across all the central banks, the 'paper printing' game is going to keep kicking equity prices upward.

For those doomer bears out there touting 'what about the weak economy', it has to be said...it simply doesn't matter. So long as the printing continues to help fund the Govt' deficits, and with much of that money feeding its way into the only asset class offering a viable annual capital gain/income, the world markets look set to just keep on pushing higher.

Even if the Fed were to reduce monthly QE by 25bn to $60bn a month this September, that would still mean the underlying pressure is still upward. I simply can't consider a major multi-month down wave until the QE stops...in FULL.

The scary thing is, that might be many years away. As Japan has shown..it can easily last decades. Why would the Fed not do the same?

As things are, the following is my 'QE-fuelled' hyper-bullish outlook, with broad upside all the way into late 2015/early 2016.


sp'weekly4b - hyper-bullish outlook, with fibs for near term Aug/Sept down wave 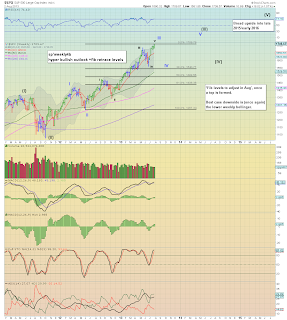 I am indeed still looking for a small multi-week down cycle into September. We might only drop to the low 1600s, but I suppose the mid 1500s are again viable if the market rolls over before mid-August.

Baring 'significant' QE taper at the Sept'18 FOMC, I can't see any serious chance of downside into year end. Indeed, the laughable aspect is even if QE is cut, the market will probably just rally on the news anyway. I will be keeping in mind the 'small' chance of a much stronger down wave in Oct/Nov, but really, I think the probability is now less than 5%.

There isn't any major econ-data due next week, certainly nothing that will merit any serious attention from Mr Market.

*there is significant QE on Tues/Thursday, of $5bn and $3bn respectively.

Well, I am going to hold to the original outlook, and I'll be seeking a short of the indexes this week, probably later on Tuesday, after the big QE is out of the way. Sp'1720s look very viable, and I think that will be a very reasonable entry. First downside will be the rising 50 day MA, currently @ 1649, and that will be in the 1660s by mid August.

It has to be said, for the remaining equity 'doomer bears' out there, we could still be a good two years or so from forming a key multi-year peak, at which point the indexes will probably have doubled from current levels.

I realise that is not what some wish to read, but the current 'QE fuelled' market doesn't look like changing for a very long time to come.

back on Monday :)
Posted by Trading Sunset at 19:15:00
Email ThisBlogThis!Share to TwitterShare to FacebookShare to Pinterest 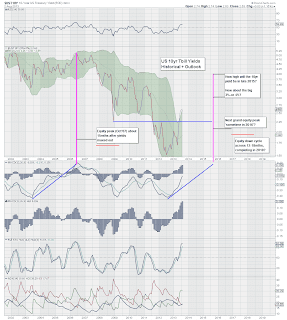 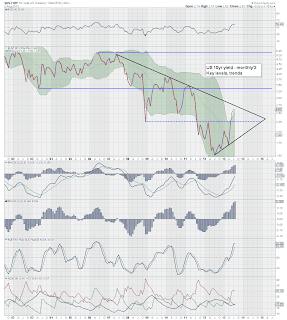 *Next main post, late Saturday, probably on the World indexes
Posted by Trading Sunset at 04:00:00
Email ThisBlogThis!Share to TwitterShare to FacebookShare to Pinterest 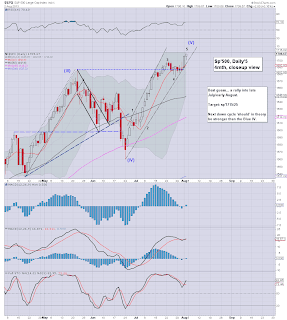 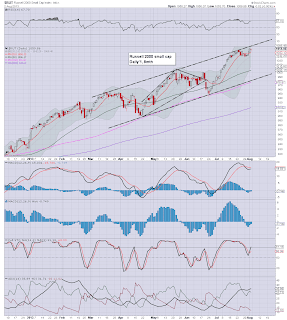 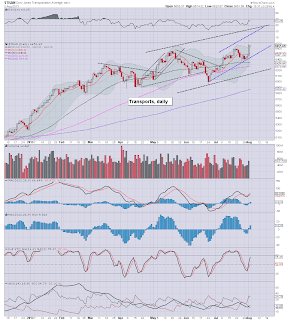 So...the sixth week higher for the US indexes, and the sp'1560 low of June'24 is now 149pts  lower. Despite seeing some incredible ramp-waves across the four years, this latest one is still one to wonder at.

However, despite the latest weekly gain, I am indeed holding to my outlook that the market is about to peak, before a multi-week down cycle into September - back <sp'1600.

Next week, we should see some rather clear divergences start to appear, and the bears will have an opportunity to put in a daily reversal candle - which would make a top a lot more decisive - just as the May'22nd peak did.
--