Futures showing...sp+16 - so thats sp'1341 - a gap straight over the troublesome area of 1332/38/40. Bears can understandably feel annoyed, but its not surprising - the daily trend IS up after all.

For this Sunday night, I thought I'd highlight a few different things for you to keep in mind over the coming week....I'm sure there will be something of interest! 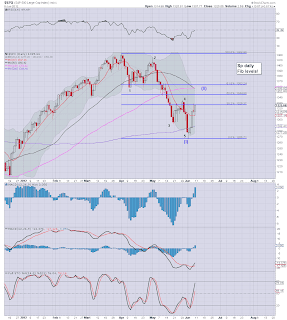 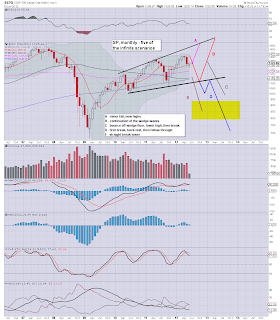 The bull maniacs will clearly be now looking for scenario A' to occur. After the dire jobs data some 9 days ago, and this weekends Spanish bank bailout (so far..its just a plan..nothing is done yet)...many of the bulls are already touting new highs of sp>1422.

From a cycle perspective, a brief move to 1350 would be easily acceptable for a wave'2....and then a very strong down move into the 1100s. 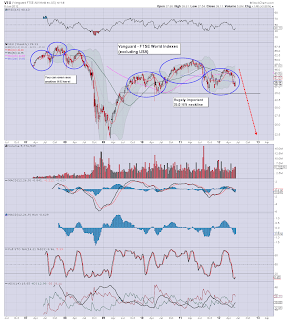 Seeking a move back to the 10MA of 41, and then a fail - to be confirmed the following week.

This VEU chart out ranks EVERYTHING currently out there in chart-land. It was inspired by John Murphy of Stockcharts no less, but I will continue to highlight it..over and over again. A break under 35.0 will be the very last warning the bulls get this summer. 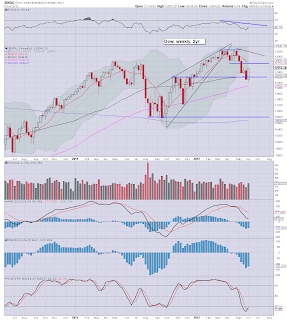 A dow target this week of 12750/850 looks very reasonable, before a sharp reversal. I can only imagine the surprise, soon to become terror as we quickly take out the recent low of 12035. So, look for the dow to break 12k...that will open up a quick move to 11k. A move under 11k..and then the games can begin.


Summary - The week ahead

We don't really have too much key econ-data this week. The major one is Retail Sales data on Wednesday - market is actually expecting a minor fall of 0.2%. Hmm, so a positive number would be another excuse for the market to rally Wednesday.

I'm sitting this nonsense out still, I will not feel comfortable re-shorting until at least the low sp'1350s. If we are at those levels (somehow by late Tuesday), I might take a short trade. Otherwise, I might sit out the entire week.

There remains the issue of whether we have even see a clear enough wave'B yet (see intra day charts from Friday). If we haven't, then maybe we'll get stuck at 1340..then 1300..and finally a move 1350/60s in the following week.

What matters for all the good bears out there, is to have good dry powder ready for the next wave lower- which should be much more dynamic and stronger than what we saw in May. A big short from the mid 1300s to the low 1100s...yeah, that would make the entire summer a good one.