With the main indexes closing moderately lower, the VIX managed to hold minor gains of 6.8%, settling @ 16.60. Despite the continuing US Govt' shutdown, the market remains relatively unconcerned. VIX still looks unlikely to break into the 20s in the near term. 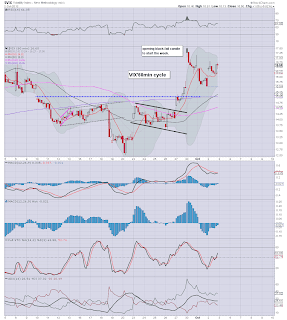 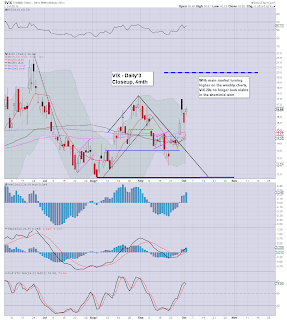 Unless the VIX can break above the Monday opening spike high of 17.49, equity bears look to be fighting a losing battle - at least for a few weeks.

The morning open, with the sp' testing ...successfully the 50 day MA, was an important victory for the bulls, and sets up a break into the sp'1700s either tomorrow or Friday.

Indeed, any weekly close of sp'1693 or higher, and the weekly charts will remain outright bullish. 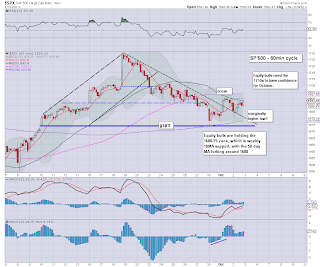 I realise for many, this market is getting increasingly annoying, if not confusing again.

I can only suggest anyone go stare at a weekly/monthly index chart for a good hour.

Either that..or watch the latest episode of Agents of Shield.
--

3pm update - rally into the close

The smaller 5/15min cycles are primed for upside into the close, not least with underlying upward pressure from the hourly/daily..and bigger cycles. Metals/Oil remain strong with gains of 2%. A close in the sp'1700s will be difficult, but if achieved, would confirm yesterdays apparent turn. 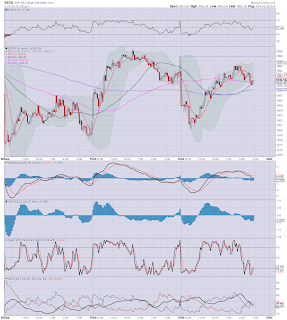 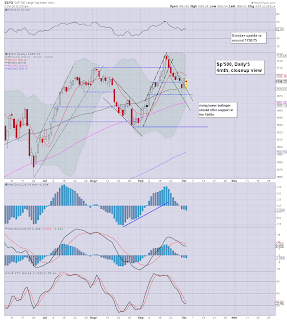 As I type, the micro 5min cycle is trying to break back upward.

Well, its been a messy few days, lets see how the closing hour goes.


3.16pm.. Equity bulls should be content with any close in the 1690s, but 1694 or higher would make for a great floor-spike daily candle.


3.30pm...Market is set up almost exactly the same as yesterday, a little ramp into the close still looks likely.
Posted by Trading Sunset at 19:55:00
Email ThisBlogThis!Share to TwitterShare to FacebookShare to Pinterest

Another day of nonsense (if somewhat expected) in market land. Bears have no downside power, and the turn yesterday is still intact. Metals and Oil are significantly higher, with the VIX cooling down. A daily sp' close in the 1700s looks viable, but it won't be easy with some selling likely in late afternoon. 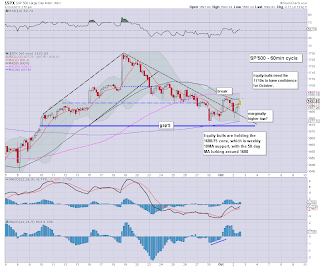 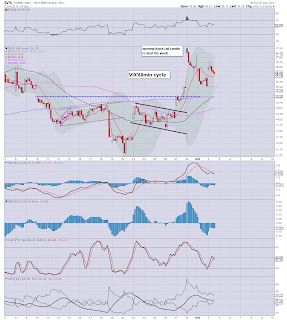 Yes, a red daily close is still possible, but does anyone really think we'll close <1680 now?
--

A frustrating market for many..and one that most simply won't ever understand (not that I'm saying I have even a moderate idea).

*King Obama speaketh at 4pm (well, he is always late, so lets call it 4.10/15pm), and no doubt the first hour of after-hours action might be worth paying attention to.

--
More than anything..the sp'1710 level remains important to close over, but that clearly ain't happening today.


STX is making a play to break a new high. 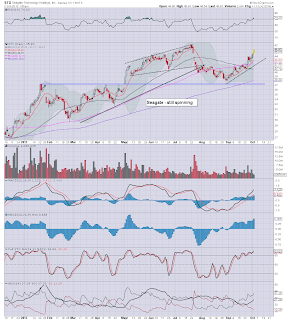 Dare I suggest, see my post on Fair Value Stocks about STX. Despite the gains this year, it remains very undervalued, relative to the main market.
Posted by Trading Sunset at 18:55:00
Email ThisBlogThis!Share to TwitterShare to FacebookShare to Pinterest

The main indexes have negated most of the opening drop, with most indexes just 0.25% lower. A close in the sp'1700s is viable. Precious metals are seeing strong gains, with Gold +$23. Oil is similarly strong, +1.8%. VIX is cooling down, now just 4% higher. 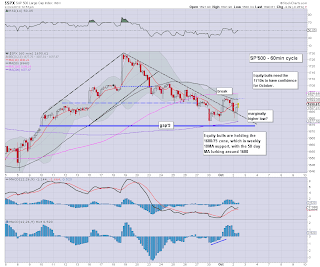 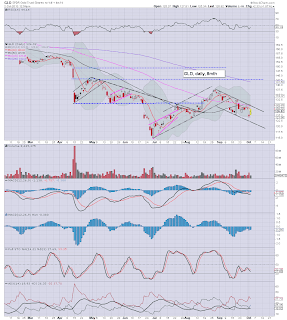 The bears had a bonus opportunity to exit this morning, and I can only imagine how many are resolutely holding out for much lower levels.

We've been in this situation so many times across the past few years..and it has very rarely turned out in favour of the bears.
-

Certainly, a close in the 1700s won't be easy, but..I'd sure not be surprised if the market manages it. We're only talking about a very slight daily gain of around 0.3%.
Posted by Trading Sunset at 17:56:00
Email ThisBlogThis!Share to TwitterShare to FacebookShare to Pinterest

12pm update - there is no downside power

The main indexes are moderately lower, but there is still a distinct lack of power on the bearish side. Despite the continuing (limited) US Govt' shutdown, the market does seem to realise its not actually important, and just another round of the political maniacs playing games. 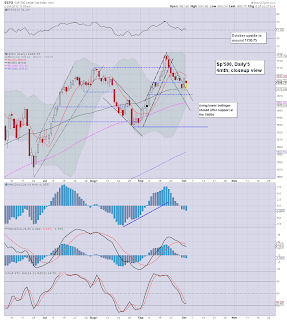 I'm tired of today, tired of the lack of downside power (although clearly some of you would disagree), and tired of the stupid little games played in the name of politics.
--

Market will surely just battle higher...a close in the 1700s would really spite the bears..and open up the more important 1710 level.

Despite moderate declines (and they certainly are NOT significant!), the market is likely just teasing the bears. If a moderately higher low can be put in today, the turn to the upside is still on course. Equity bulls should seek a daily close in the 1700s before this week concludes. 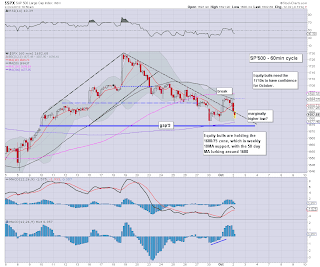 I'm still guessing this is just a tease to the bears.

The price action does not have any downside power to it, certainly..the mood is far less bearish than the Monday open.
-

Anyone not already long is getting the opportunity to jump aboard, with a simple stop in the 1680/70 zone.


11.20am.. a daily close in the 1700s would no doubt confuse many..and disgust the bears. Oh well, its not like the price action isn't offering any clues.
Posted by Trading Sunset at 15:52:00
Email ThisBlogThis!Share to TwitterShare to FacebookShare to Pinterest

The main indexes open lower, but if the bears fail to break back under the 50day MA - sp'1679, then this morning is almost certainly just another tease, before renewed gains. Equity bulls should be battling for a close in the low 1700s. 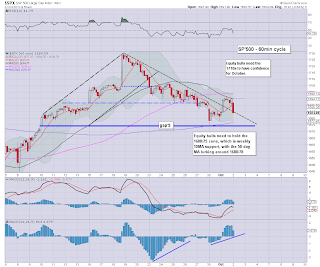 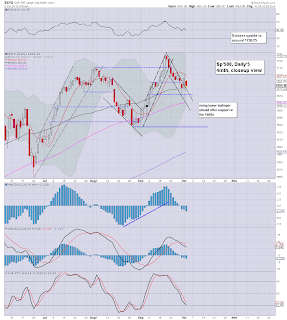 Mr Market sure loves to tease, and baring a break back into the 1670s, I'm guessing that is exactly what this mornings open is.
-- 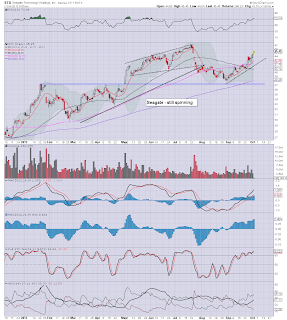 STX starting to fly...and even the Cramer (somewhat to my horror) mentioned it on morning clown TV.
Posted by Trading Sunset at 14:52:00
Email ThisBlogThis!Share to TwitterShare to FacebookShare to Pinterest

Good morning. Futures are lower, sp -12pts, we're set to open at 1683, a mere 8pts above the recent key low. Precious metals are bouncing, with Gold +$10. Oil is similarly a little higher. Equity bulls have a real problem to start the day. 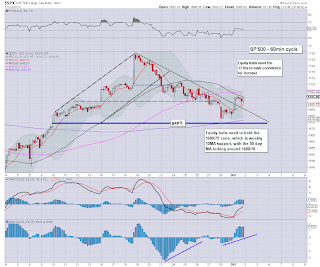 So, all of yesterdays gains are going to be negated at the open. The only issue now is whether the recent low of sp'1674.99 is taken out.

I see a fair few out there touting the 1660s before the next up wave, but then, most of those are calling for massive declines this month.

9.45am.. market looks okay, should have a fair chance to hold the 50 day MA of 1679/80. If it can hold that today, thats a strong sign that the opening declines are to be dismissed.
Posted by Trading Sunset at 13:57:00
Email ThisBlogThis!Share to TwitterShare to FacebookShare to Pinterest

Equities have started Q4 will some rather important gains, and with the sp' back in the 1690s, the weekly charts are back to outright bullish. The monthly sp' chart is now offering the 1740s later this month. Baring a debt ceiling crisis in a few weeks time, market bulls look set to rule the rest of 2013. 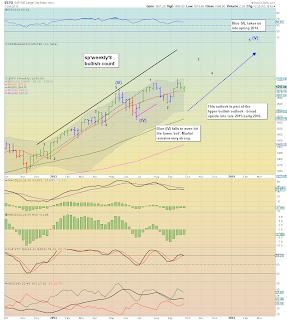 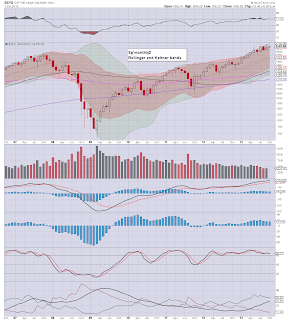 The little ramp into today's close was pretty much the sort of nonsense that even I saw coming. Certainly, the market will need to put in a few daily closes above the important sp'1710 threshold before I can get really confident, but that does seem very likely.

With the new month, the monthly charts have seen their bollinger bands jump higher. The sp' upper bol is now 1743, and if we are trading in the 1740s later this month, that will have further risen to the 1750s.

If there is no debt ceiling problem this month, the sp'1800s will become a very valid target for Nov/Dec. The 'hyper-bullish' outlook best guess is for a year end close in the 1850/1950 zone. I realise the 1900s seem a crazy target, but then...few were touting 1700s at the start of this year.

Wednesday has ADP jobs data. The Bernanke is speaking at 3pm (at some banking conference), although I'm entirely unsure if the media/market will be interested in that particular event.

So...I'm guessing the market has put in a key turn. The issue now is whether we break a new high >1729..and with continued QE, why would we not?

Yes, there is the debt ceiling issue, and if the US political maniacs can't agree on dealing with that quickly, Mr Market is going to get seriously upset, and we could see a brief..if not very severe equity drop..with VIX most definitely in the mid 20s..if not 30s.

For the moment, I remain long (if currently underwater), and seeking an exit in the sp'1750/75 zone later this month.
--

The main indexes closed moderately higher, with the sp +13pts @ 1695. There were enough bullish breaks to suggest that it does appear likely the market is now beginning a new up wave, one that could last into November. Primary target zone is sp'1750/75 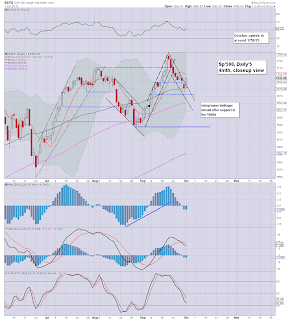 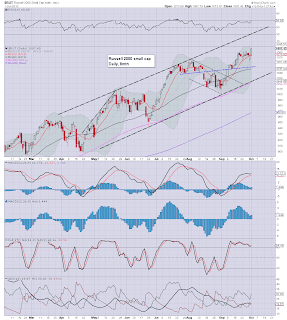 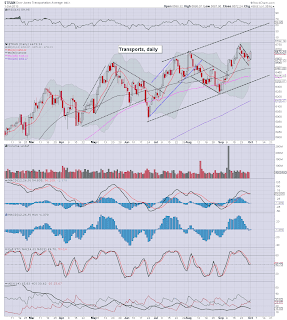 The market opened a touch higher, and with the morning break into the sp'1690s, the market looked pretty comfortable into early afternoon. A natural minor down cycle washed out the weaker bulls, sucked in the bear chasers..and then a little closing hour jump into the mid 1690s.

All things considered, this is very likely a key turn day, and equity bulls will likely see at least some level of further gains into the Friday close.