With the main indexes showing renewed weakness in the latter half of the day, the VIX closed over 7% higher @ 17.92. This still remains a bizarrely low level of volatility, even 20 is still a further 12% away. 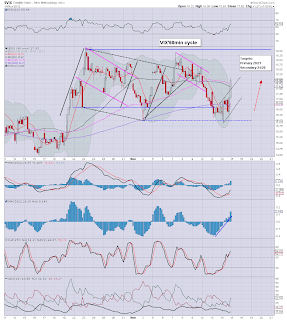 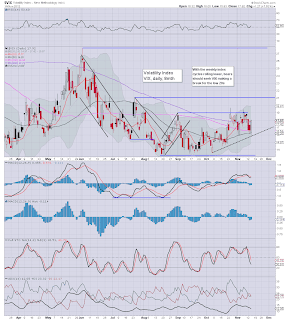 A real mess in the morning in VIX land, but the opening candle was a reversal (hollow red) candle, and after breaking into the 15s..briefly...the VIX battled higher into the close.

I don't believe VIX can break into the mid 20s, unless we see a one-day special, with a major collapse wave <1300. Odds are very much against that happening.
Posted by Trading Sunset at 23:00:00
Email ThisBlogThis!Share to TwitterShare to FacebookShare to Pinterest

The market saw yet another day of weakness, one where a series of intra-day rallies failed to hold. The closing hour was especially weak, and we could very easily open at my primary target of sp'1345 tomorrow morning. Even the VIX started to show some strength in the latter half of the day. 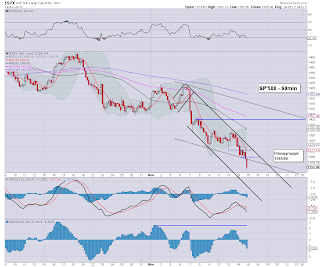 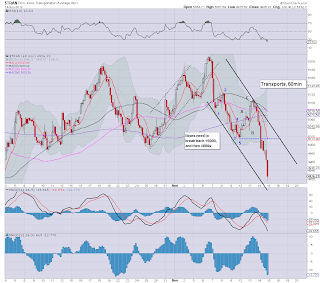 A tiresome day, one where the market teased with a micro-rally on three occasions, but it could never hold.

A very weak afternoon, and the primary target of sp'1345/40 looks set to be hit early tomorrow.
-
I'm all cash (to my own annoyance). If we gap open lower @ 1345/40 tomorrow morning, I will be tempted to go long, but I can only imagine that would tempt the trading gods to crash this market straight down to sp'1200.

For me, this all remains a complete waste of time..and even money. I hope the rest of you are doing infinately better.
Posted by Trading Sunset at 21:01:00
Email ThisBlogThis!Share to TwitterShare to FacebookShare to Pinterest

The market failed to hold the morning low of sp'1365, and we're now seeing a touch of renewed strength in the VIX. There certainly is no panic as such, but all micro-rallies continue to fail. With opex this Friday, and a truck load of Puts <1400, will the market makers somehow magically ramp the market into the Friday close? 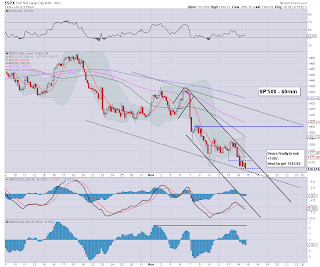 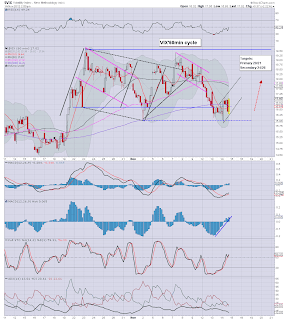 *I'm sitting this out until tomorrow. There is too much risk of upside in my view, and I sure won't be chasing this lower, even if we break into the 1350s.
-

The weekly charts now suggest sp'1340...probably tomorrow.
Posted by Trading Sunset at 19:52:00
Email ThisBlogThis!Share to TwitterShare to FacebookShare to Pinterest

The earlier floor of sp'1365 held, and we're still battling higher..although it sure is choppy at times. Partly, that is due to the President speaking, but we also have the fed minutes due at 2pm. 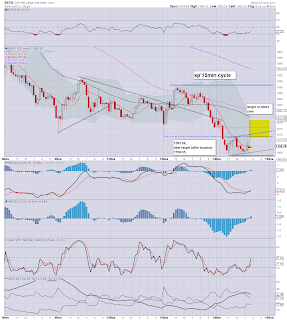 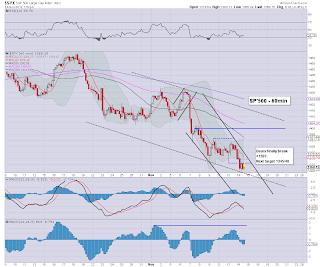 Mr Market is seeing some considerable choppy action in the 1366-69 area.

I would feel a lot more comfortable  re-shorting around 1375/80, but even that zone might be out of range by the close of today. I suppose its possible we'll briefly gap higher tomorow.

I sure won't chase this lower today, way too much risk of a whipsaw back to the upside, not least with opex this Friday.

You know, I'm starting to get a nasty feeling this market is going to hyper-ramp to 1390/1400 by the Friday close. Its opex on Friday, and no doubt the market makers will want to wipe out as many puts as possible. 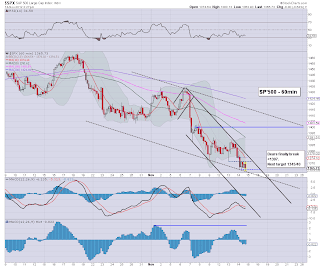 Perhaps 1360s was the low of this wave..and we'll sideways claw higher into the weekend.
--
Posted by Trading Sunset at 18:54:00
Email ThisBlogThis!Share to TwitterShare to FacebookShare to Pinterest

Mr Market is trying to hold above the 1365 morning low, it looks like it will hold, and a bounce to 1375/80 is still viable later this afternoon. The VIX remains up a mere 1.8%, which is frankly embarrassing from a bearish perspective. 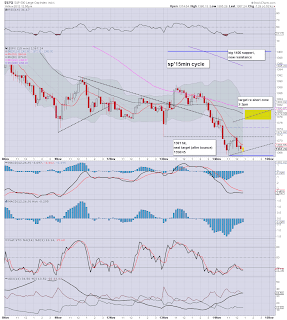 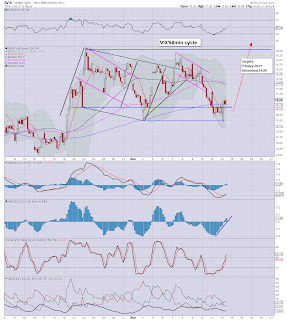 The multi-week weakness continues to show through, although as ever, bounces are a natural part of any broader down cycle.
--

I exited earlier this morning @ 1367..and seeking a re-short around 1375/80 later today. If instead, we just keep falling..I will not chase it. Too much risk of a 'stupid bounce'. 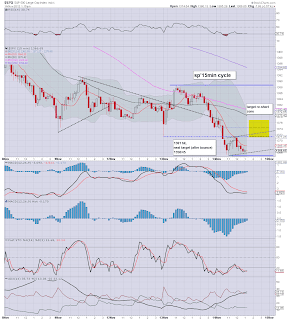 So...permabear..standing by...re-shorting, probably around 2.30/3pm.
Posted by Trading Sunset at 17:57:00
Email ThisBlogThis!Share to TwitterShare to FacebookShare to Pinterest

Mr Market is looking shaky again today. Those early gains failed to hold, and we've seen my next soft target of 1365 hit. Primary target remains sp'1345, which could be hit as early as tomorrow. VIX remains a problem for the bears, and is still not able to hold the 17s. 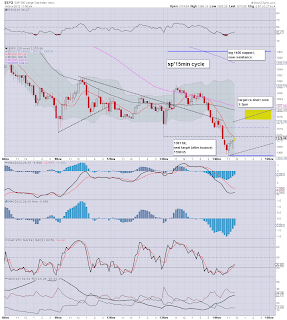 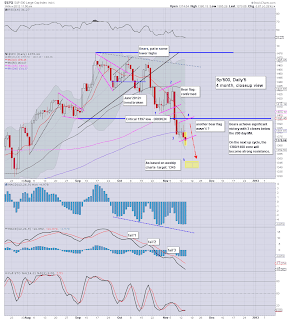 Those deluded bull maniacs should be getting real twitchy now, we've broken into the 1360s, and my primary target of 1345 remains right on track.
--

I am seeking a re-short later today, sometime around 2-3pm.

*Fed minutes due at 2pm, I can't guess how market will react to that.
--

further updates....as necessary (your invoice is in the mail)

Well, we just had a little wave lower, a B'wave ? Regardless, the spike, is suggestive we're still headed for 1375/80 within a few hours. 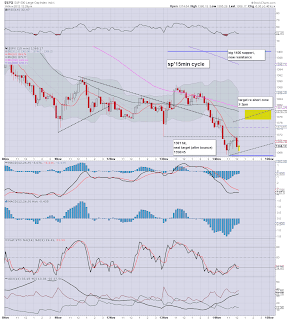 Posted by Trading Sunset at 16:51:00
Email ThisBlogThis!Share to TwitterShare to FacebookShare to Pinterest

11am update - waiting for a bounce 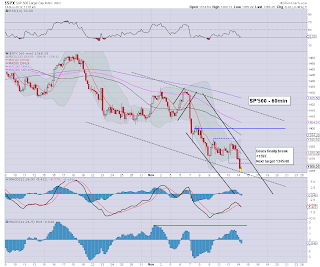 We're certainly seeing some renewed weakness, but its looking tired already..and a bounce back to evens seems very viable.

*I exited shorts at 1367 just earlier..we could easily bounce back into the mid 1370s later today.
I'm not yet sure if I want to re-short later in the day.
-

UPDATE 11.13am - sp15min - you can see a very likely bounce already starting 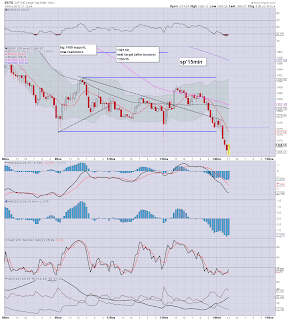 With the MACD cycle so low, it'll likely take until late in the day to reset.

My best guess..a bounce to 1377/80 by 3pm..and then ..closing hour rollover to close slightly red.
Posted by Trading Sunset at 16:09:00
Email ThisBlogThis!Share to TwitterShare to FacebookShare to Pinterest

10am update - another rally attempt to fail

Good mornng. The market opens with moderate gains, but it sure doesn't look like they'll hold. VIX is a touch lower, but so far, it has not broken yesterdays low. 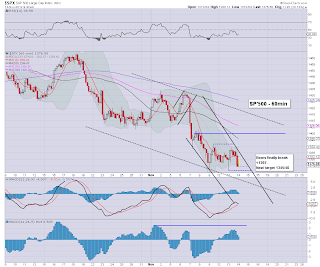 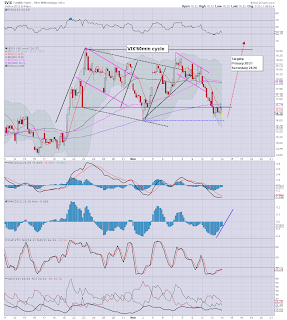 *retail sales came in a touch lower for October, and there should be the real concern that the 'black Friday' (Nov'23) holiday shopping period will be much weaker than last week. As ever, we'll just have to see how much free cash the American consumer has to spend.
-

FB is seeing a stupid bounce +7% or so, it won't last. Its merely another opportunity to short, just like that stupid 25% day was a few weeks ago. 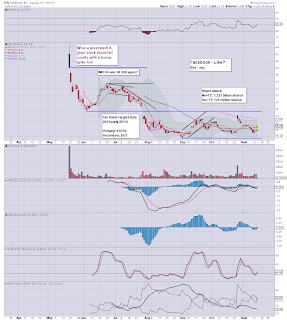 back at 12pm
Posted by Trading Sunset at 14:45:00
Email ThisBlogThis!Share to TwitterShare to FacebookShare to Pinterest

Yet another day where the bulls rallied from initial opening declines, but once again..the rally failed. The main market closed moderately lower, and the sp' saw its fourth consecutive close under the important 200 day MA. 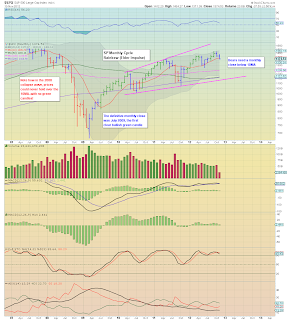 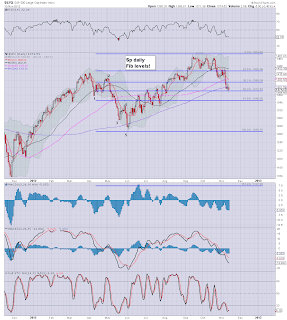 First, the big monthly rainbow chart is still comfortably sporting its second consecutive warning blue candle. Just a little lower, and we might see this flip to red - which would be a major warning of trouble into December.

The daily fib' chart is something I like, the 61.8% retracement @ 1345 is particularly appealing to me, as it matches up with the lower bollinger band on the weekly charts.

If you look at the MACD (blue bar histogram) on the daily charts, its remarkable to note that since Bernanke announced QE3, we've seen a quadruple down cycle, and there is no sign of things levelling out yet. The height of irony for the Fed, they may have marked a grand top in the market with their latest bout of printing madness.


The Puetz window is approaching

Speaking of madness, I'm tentatively throwing out into the open my own chart, which highlights the Puetz crash window. With today's solar eclipse in the southern hemisphere, the window will open in around nine days.

It is just something I am keeping in the back of my mind in the days ahead. It is NOT something I am trading around. However, the statistical basis on which the theory is based..is (I believe) correct. 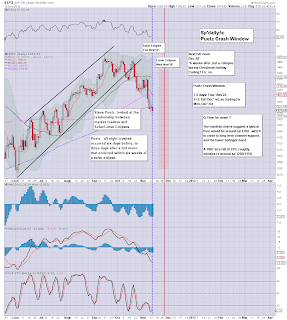 The window effectively opens around Thursday Nov'22 - although the market is closed for Thanksgiving, and is only open from 9.30am to 1pm on Fri' Nov'23.

The window closes over the weekend of Dec 1/2. So, I would include trading on Monday Dec'3rd.

I will say a lot more on this crash window, if we break <sp'1300 in the days ahead. For now, that's all I'm going to say. So..you now have my take on that issue. 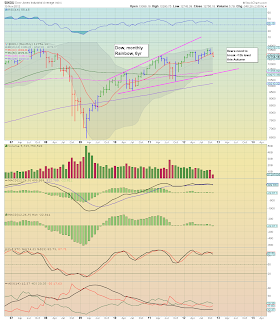 With the dow closing -59pts today, the monthly chart is now flashing the first sell signal, and is confirming the provisional blue candle warning from October. The natural target in this new multi-month decline would be somewhere around 11500/250.
--

Today was certainly a testing one - although in fairness, the trading range was barely 1%. There is still seemingly likely at least one major downside wave due, regardless of where the moon and sun might be ;)

A very mixed day, one where opening declines were erased with a morning mini-ramp, only to see renewed weakness return after lunch, with the broader market closing moderate lower. The VIX appears to have floored, and closed a touch green, and thus confirmed the underlying index weakness. 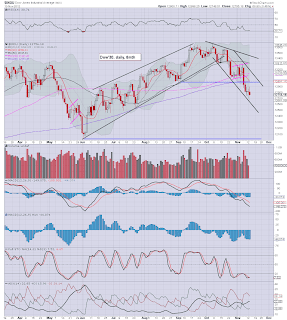 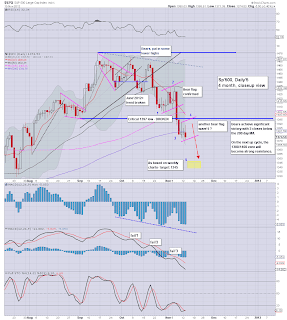 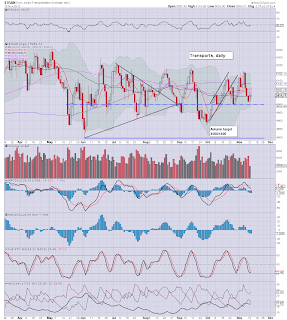 Today was another fine example of how the rallies are to be sold into. The bulls have been valiantly battling for almost two months now, and EVERY rally is failing (at least across a multi-day time frame).

The price action into the close was pretty bearish, and there is now the potential for a major gap lower early Wednesday morning.

With the VIX hourly cycle primed for a good 4-6 hours upward action, everything is now setup for the bears.

If we don't break into the 1350s tomorrow - at least briefly, I would be kinda surprised.

I remain short, holding to my primary target of sp'1345.