US equities built notable gains across much of the day, sp +13pts @ 2066. The two leaders - Trans/R2K, both settled higher by a rather significant 1.2%. Dow broke a new historic high of 17897. With the renewed gains, near term outlook is 'mixed'. 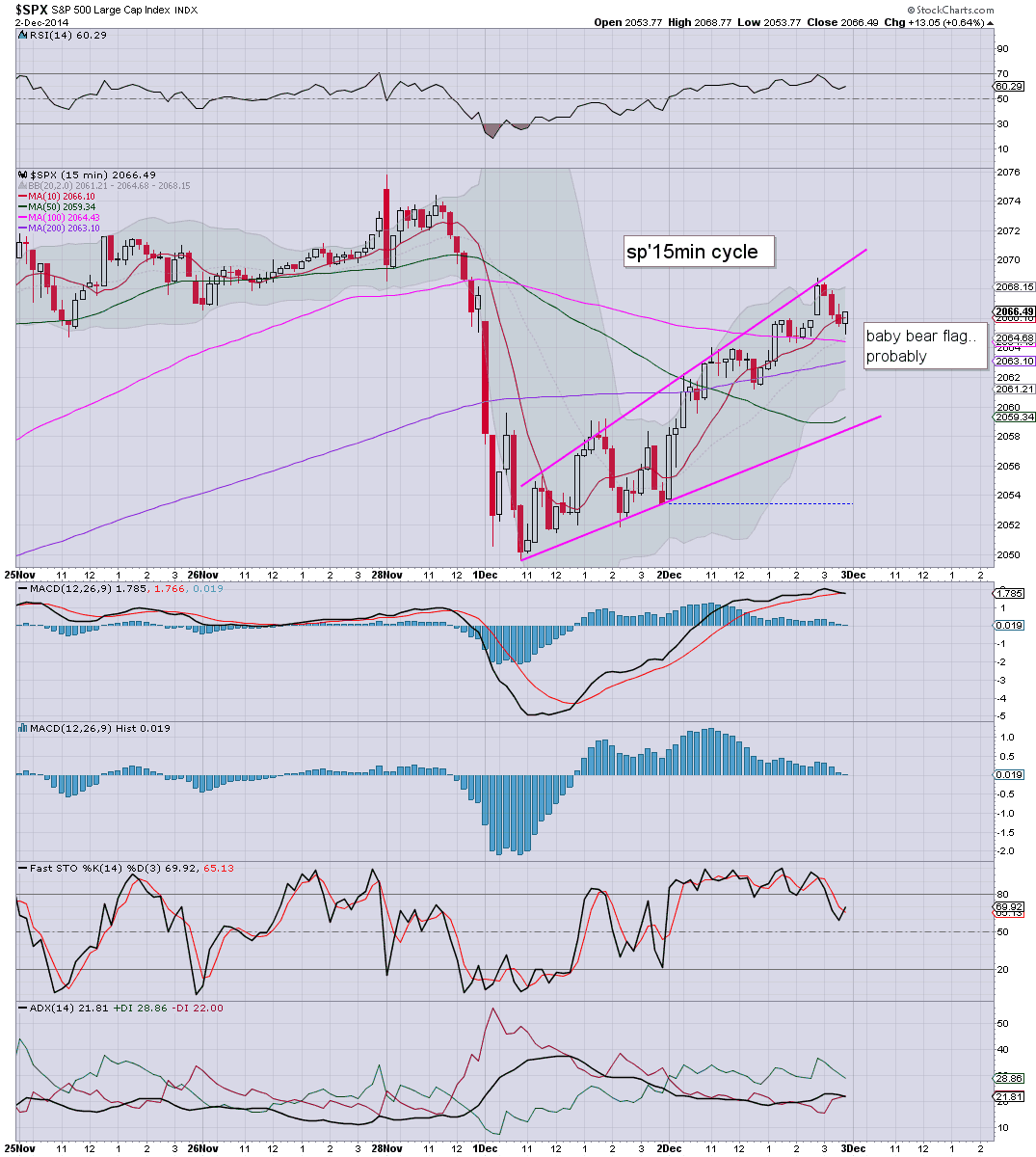 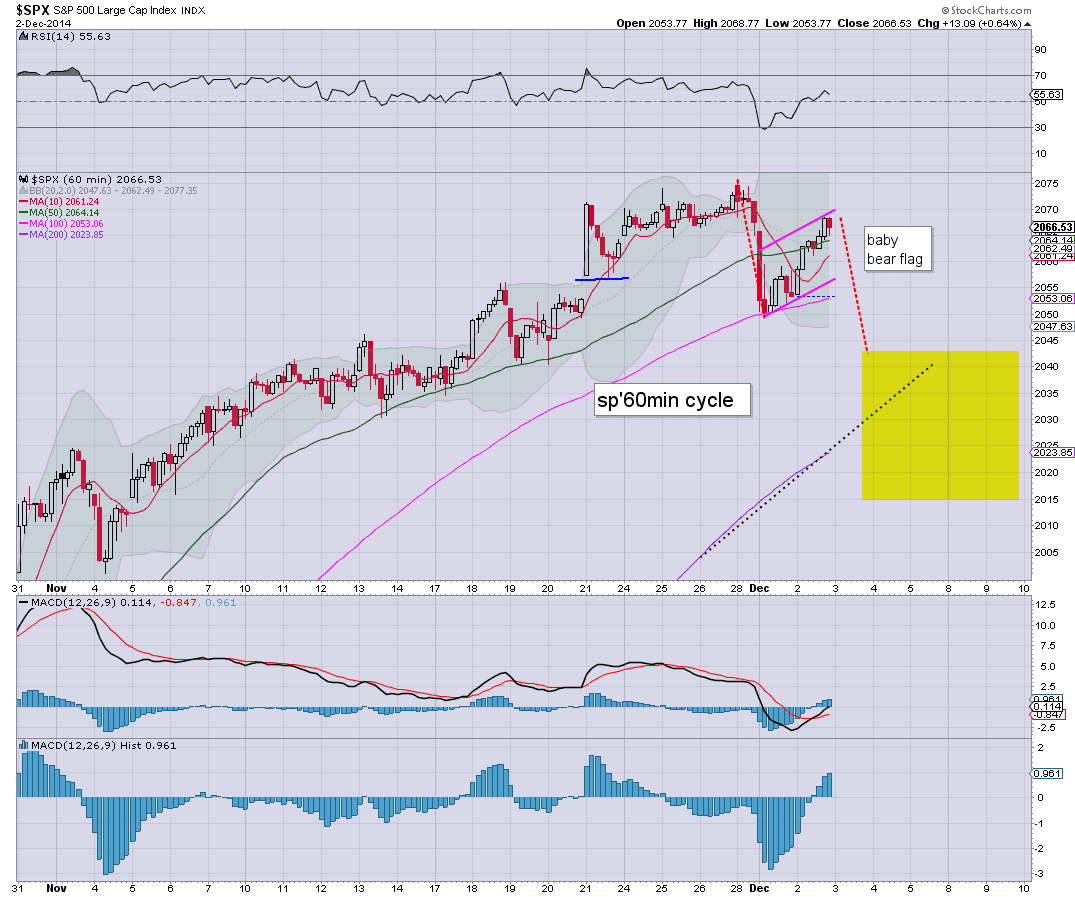 In many ways, with the hyper-ramp from sp'1820 that we've seen, even retraces are more often about trading sideways, than actual price declines.

It is thoroughly depressing, and I'll have no part in trying to trade what are (at best) minor retraces.
--

a daily wrap at 8pm
Posted by Trading Sunset at 21:03:00
Email ThisBlogThis!Share to TwitterShare to FacebookShare to Pinterest 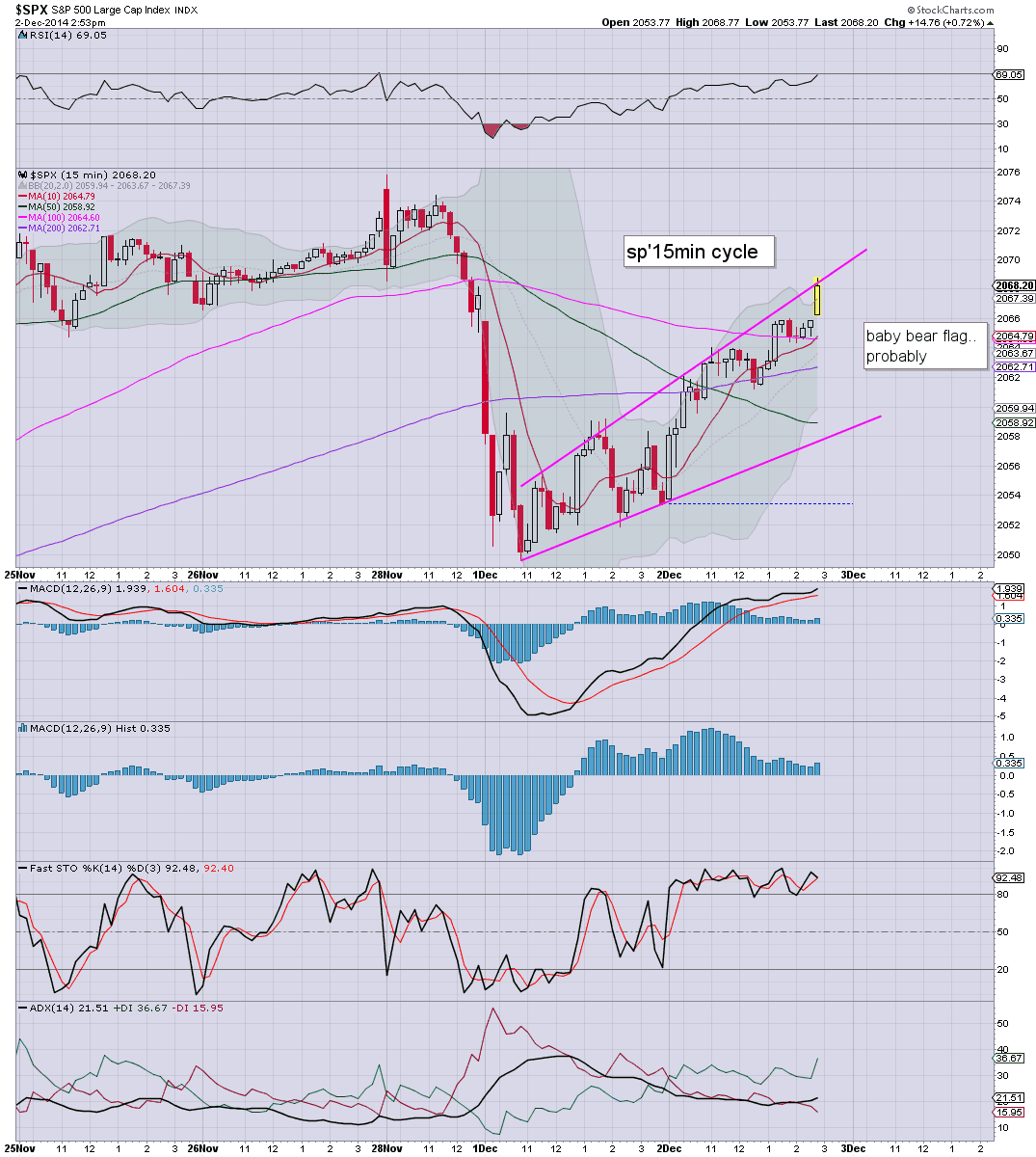 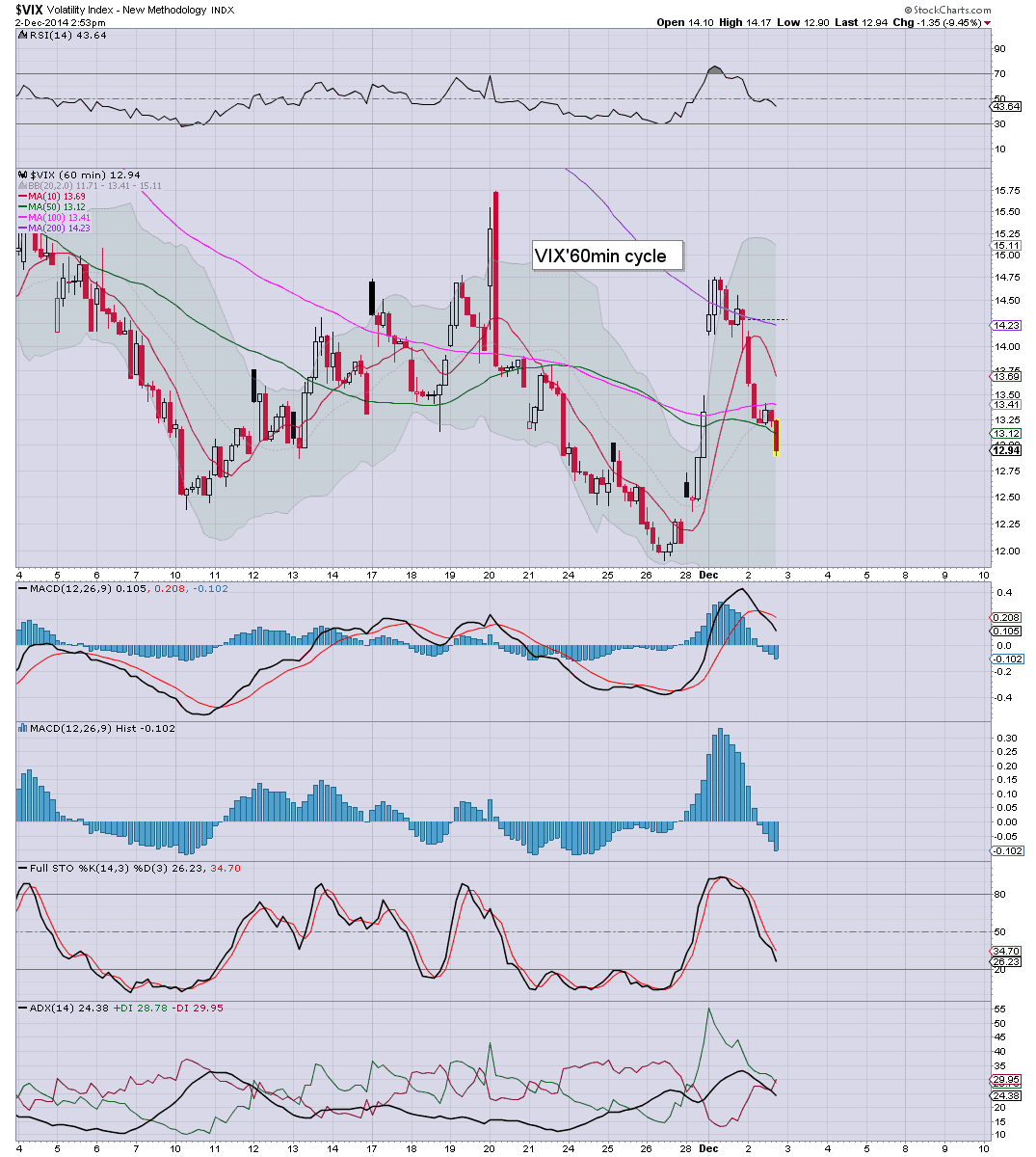 Well, maybe we'll get another wave lower tomorrow, but regardless, today has been just another disappointing day for those in bear land.
-

Notable strength: BAC, +2.0%, and I'll very likely be referring to that one a great deal across next year.

3.28pm. .. a touch of weakness.. we ARE still due to rollover, but really, the waiting is real tedious.

*a lot of things are due tomorrow, not least ADP jobs and Fed beige book, but more on that.. after the close. 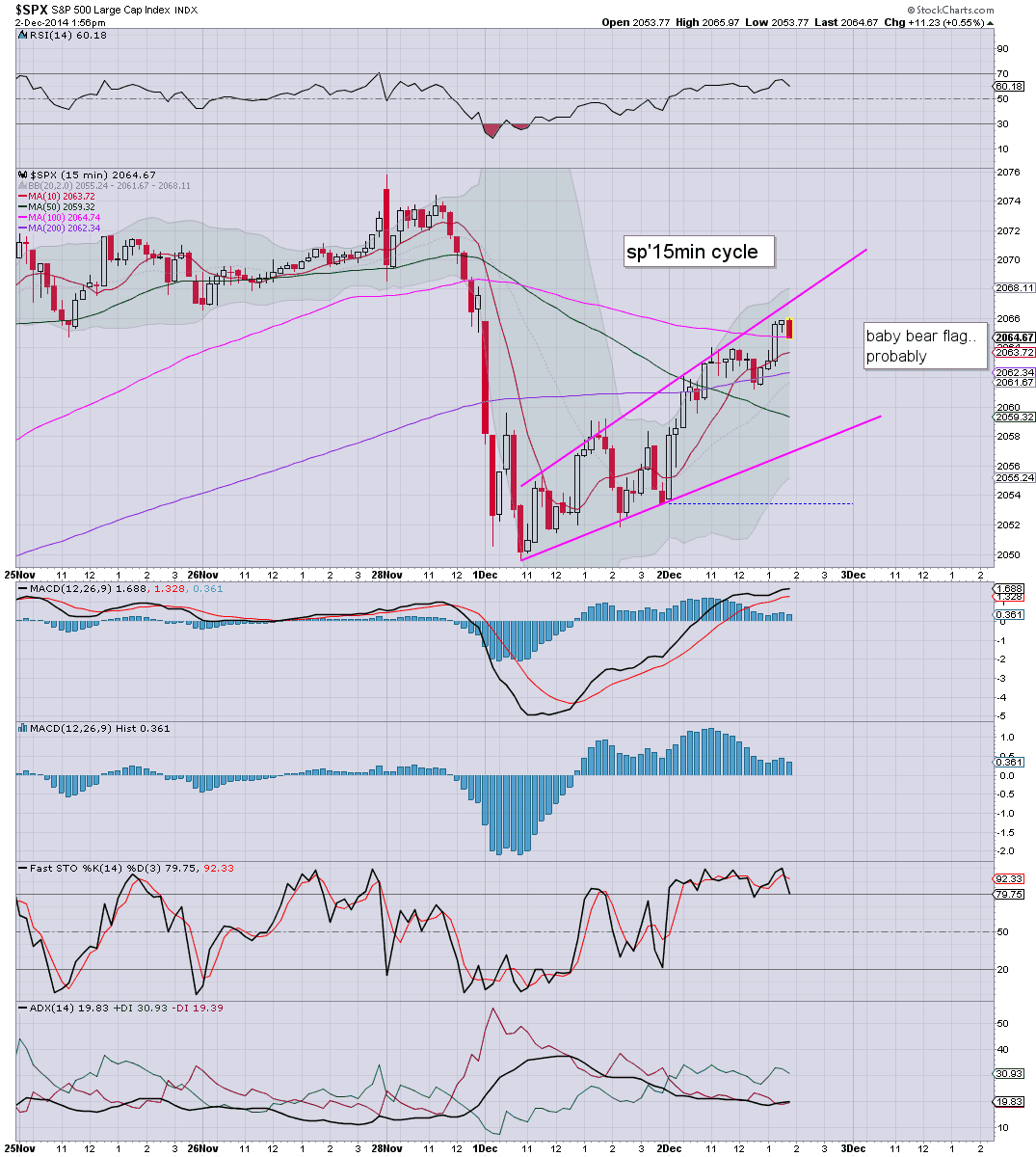 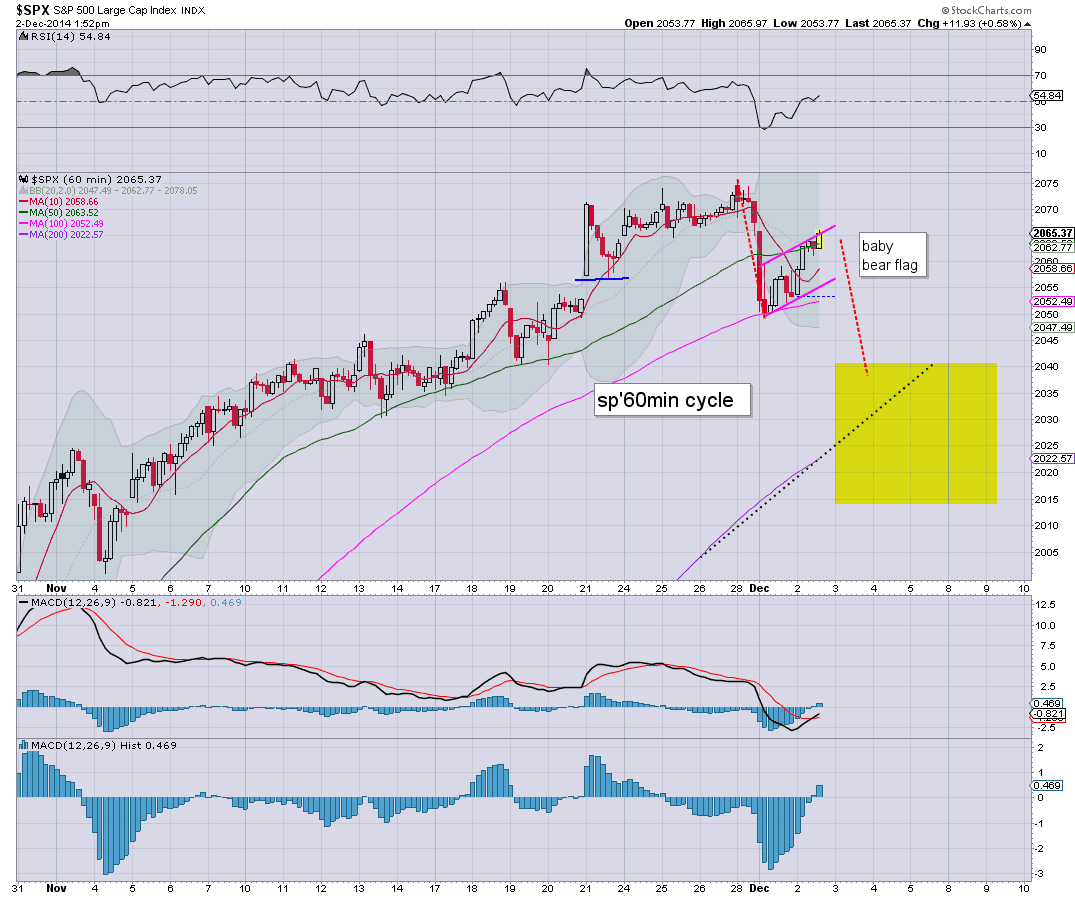 Overall.. its getting a bit tedious again, and that is just one of the reasons I have zero interest in trying to trade the smaller down cycles. To me.. seems a waste of time.. not least whilst the broader trends are higher.
-

The one aspect completely failing to offer any concern.. the VIX,...-8% @ 13.12.
Posted by Trading Sunset at 18:54:00
Email ThisBlogThis!Share to TwitterShare to FacebookShare to Pinterest

US equities are still holding gains, with more significant upside in the Trans/R2K. Price structure remains a bear flag, with viable downside to sp'2020/15 in the near term. Metals remain weak, Gold -$12, whilst Oil is -2.0%. 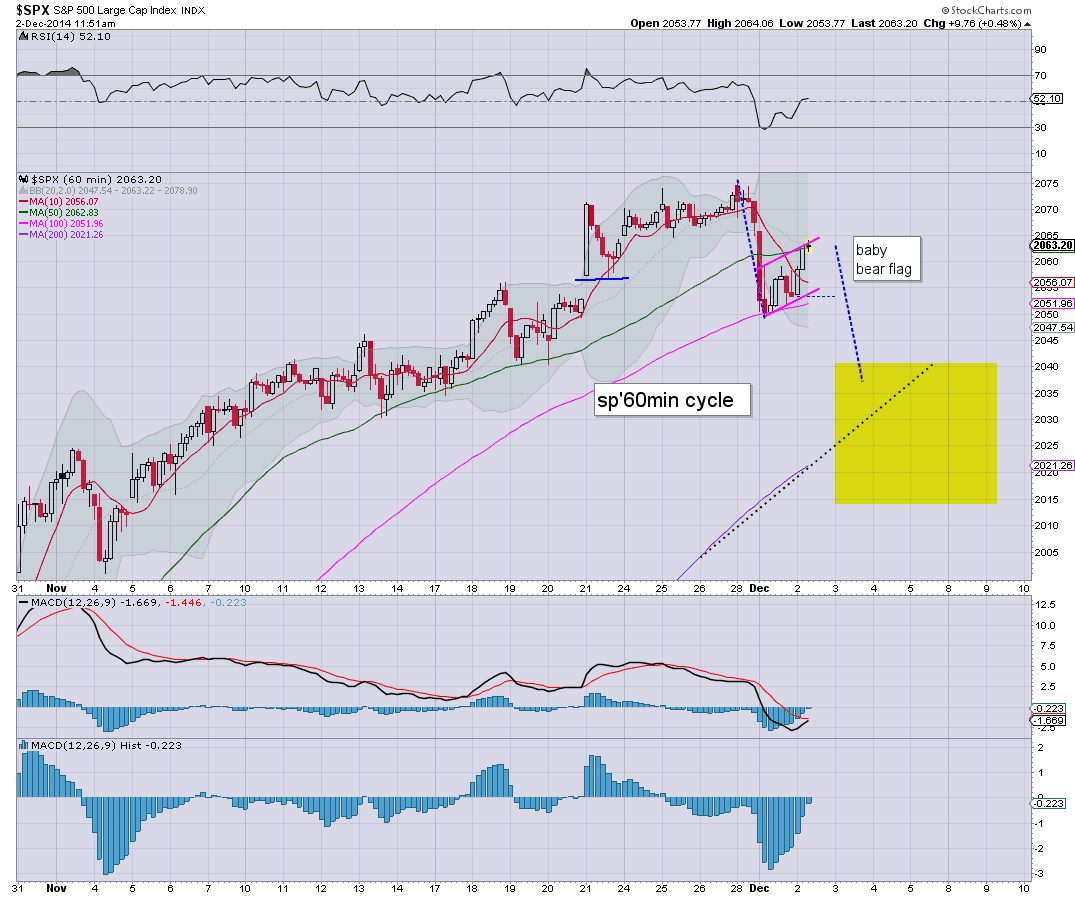 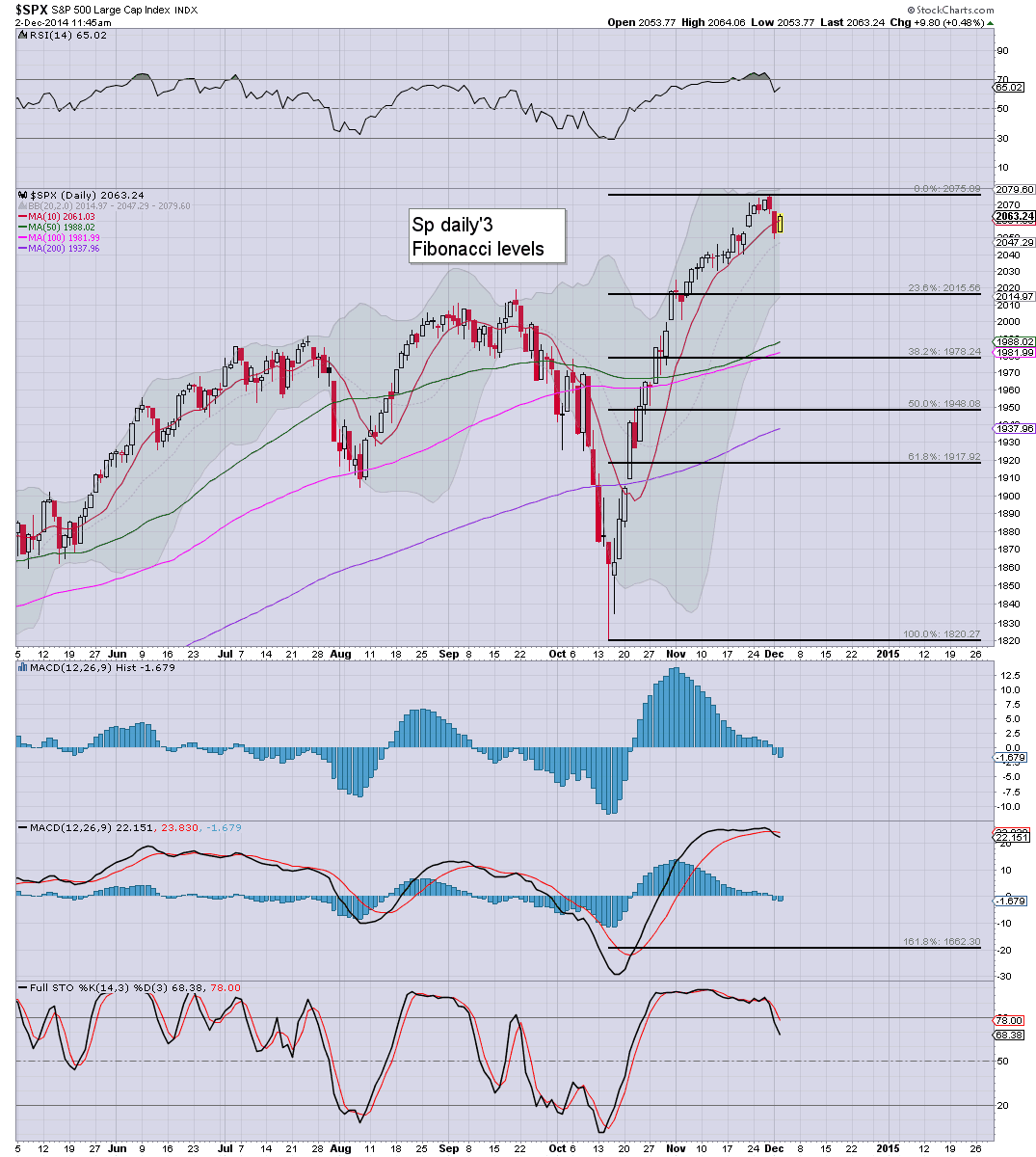 In any case... sub'1900s are impossibly out of reach. The sp'2100s remain a valid target.. whether late Dec' or January..  it should make no difference.


--
time to sleep.. or something.    Back at 2pm
Posted by Trading Sunset at 16:52:00
Email ThisBlogThis!Share to TwitterShare to FacebookShare to Pinterest

US equities are holding gains.. but it is the typical turn time of 11am.. and Mr Market is certainly vulnerable to cooling back lower for the rest of today. With a higher USD, Gold is under pressure, -$12, whilst Oil is -2.5%. 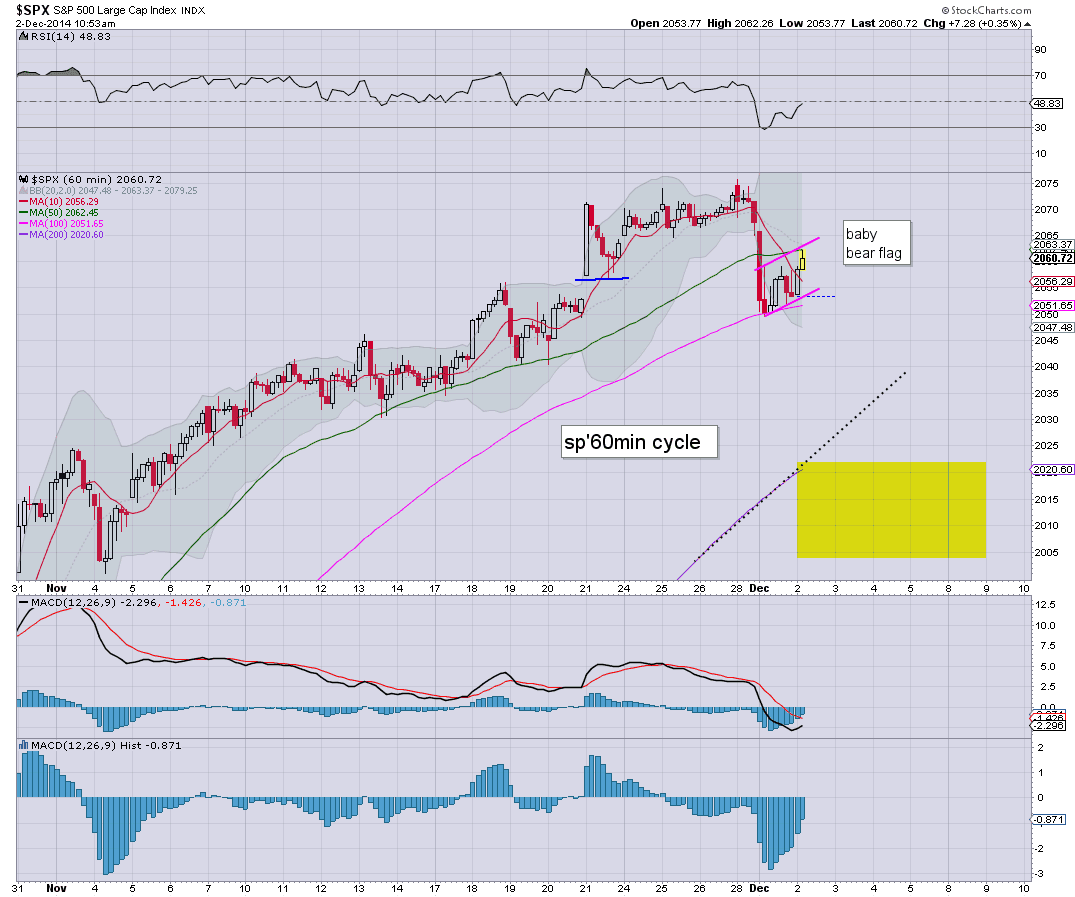 Suffice to say, if bears can turn the indexes fractionally red by 1pm... it'll make for an interesting afternoon.

Notable strength: BAC +1.6%
Posted by Trading Sunset at 15:57:00
Email ThisBlogThis!Share to TwitterShare to FacebookShare to Pinterest

10am update - still a bear flag

Despite opening moderately higher, US equities look highly prone to turning lower as the day proceeds. With the USD +0.7%, commodities are under pressure, Gold -$17, with Oil back on the slide, -3.2%. 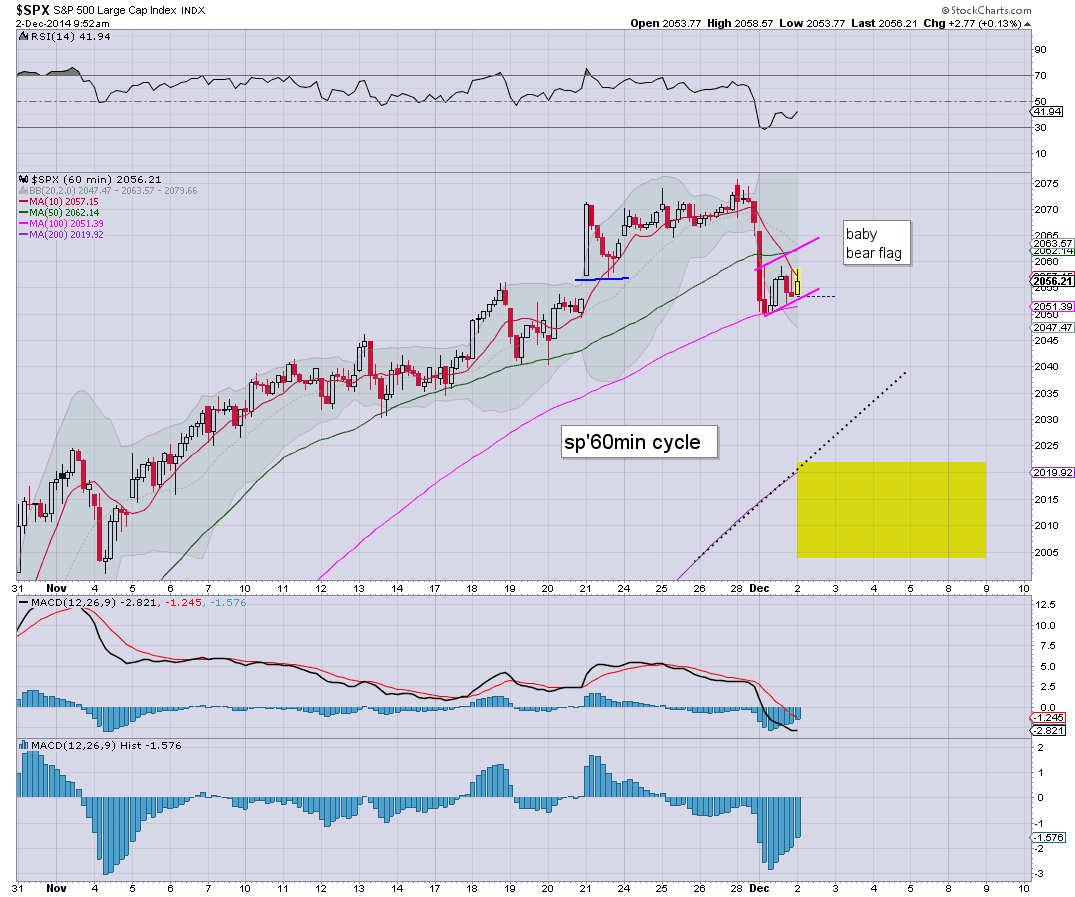 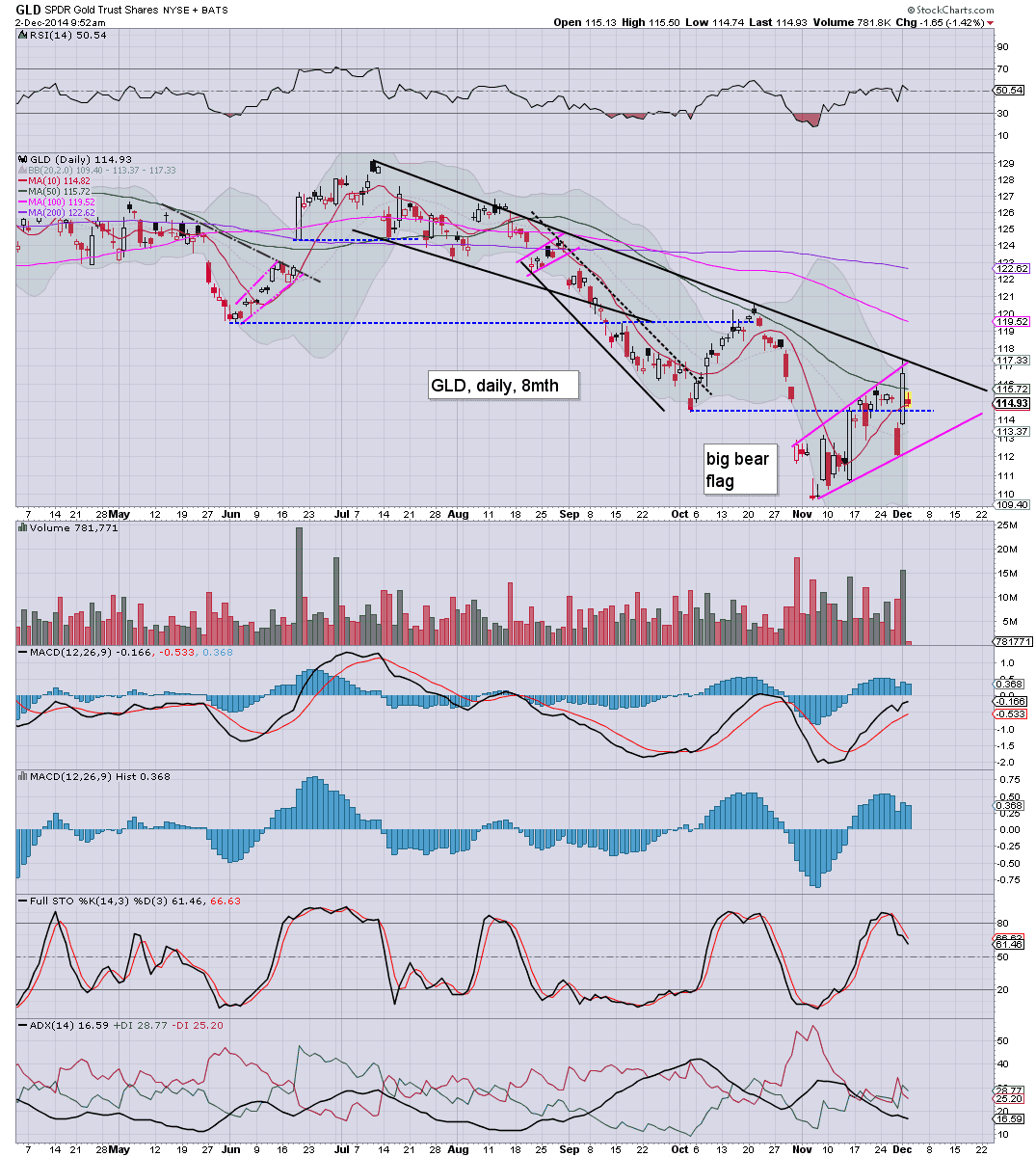 *action in the metals (and miners).. along with Oil remains pretty wild...  as usual.. both are closely tied to currency changes.
--

So.. indexes are a little higher.. but really..  we look set to break a fair bit lower.. later today.
-

Good morning. Futures are moderately higher, sp +4pts, we're set to open at 2057. Price structure remains a bear flag on the hourly chart, and there remains fair opportunity for the bears to knock the market down to the 2045/40 zone later today. 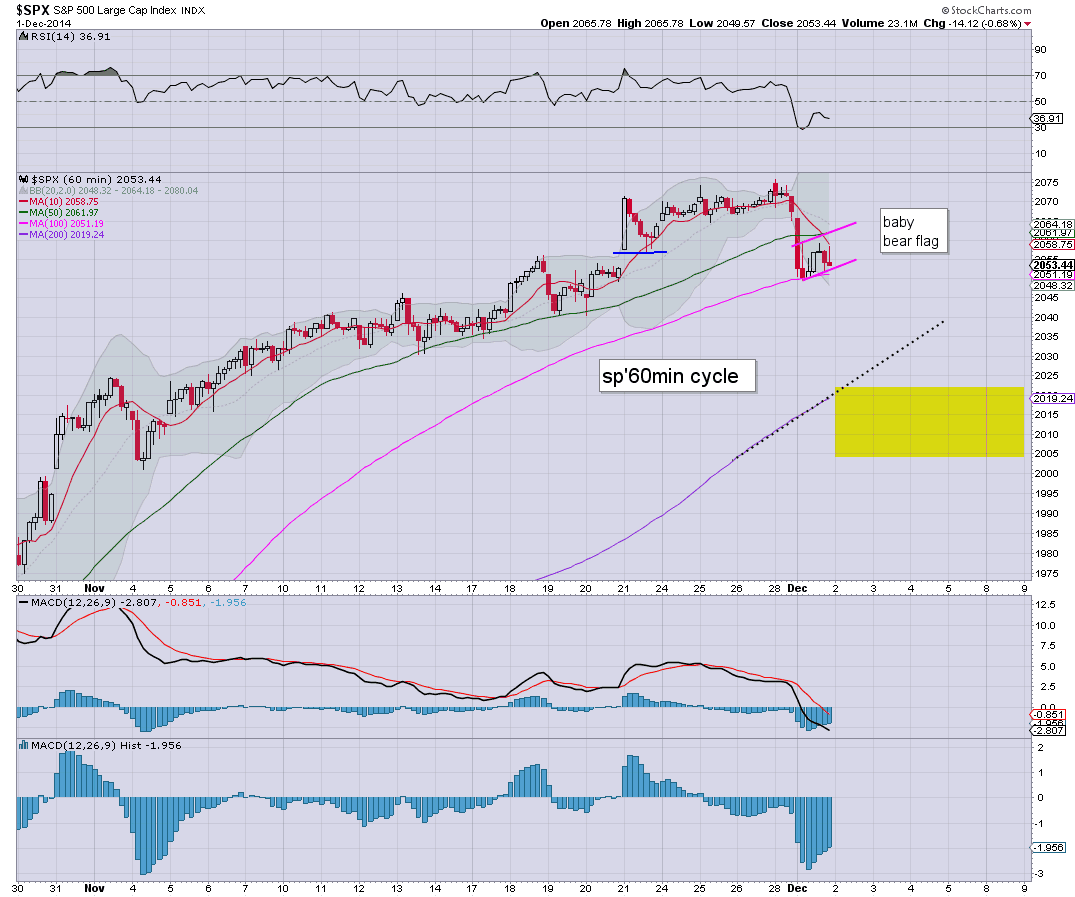 Commodities are weak. not least pressured via the USD, +0.5%


--
Good wishes for Tuesday trading!
Posted by Trading Sunset at 13:07:00
Email ThisBlogThis!Share to TwitterShare to FacebookShare to Pinterest 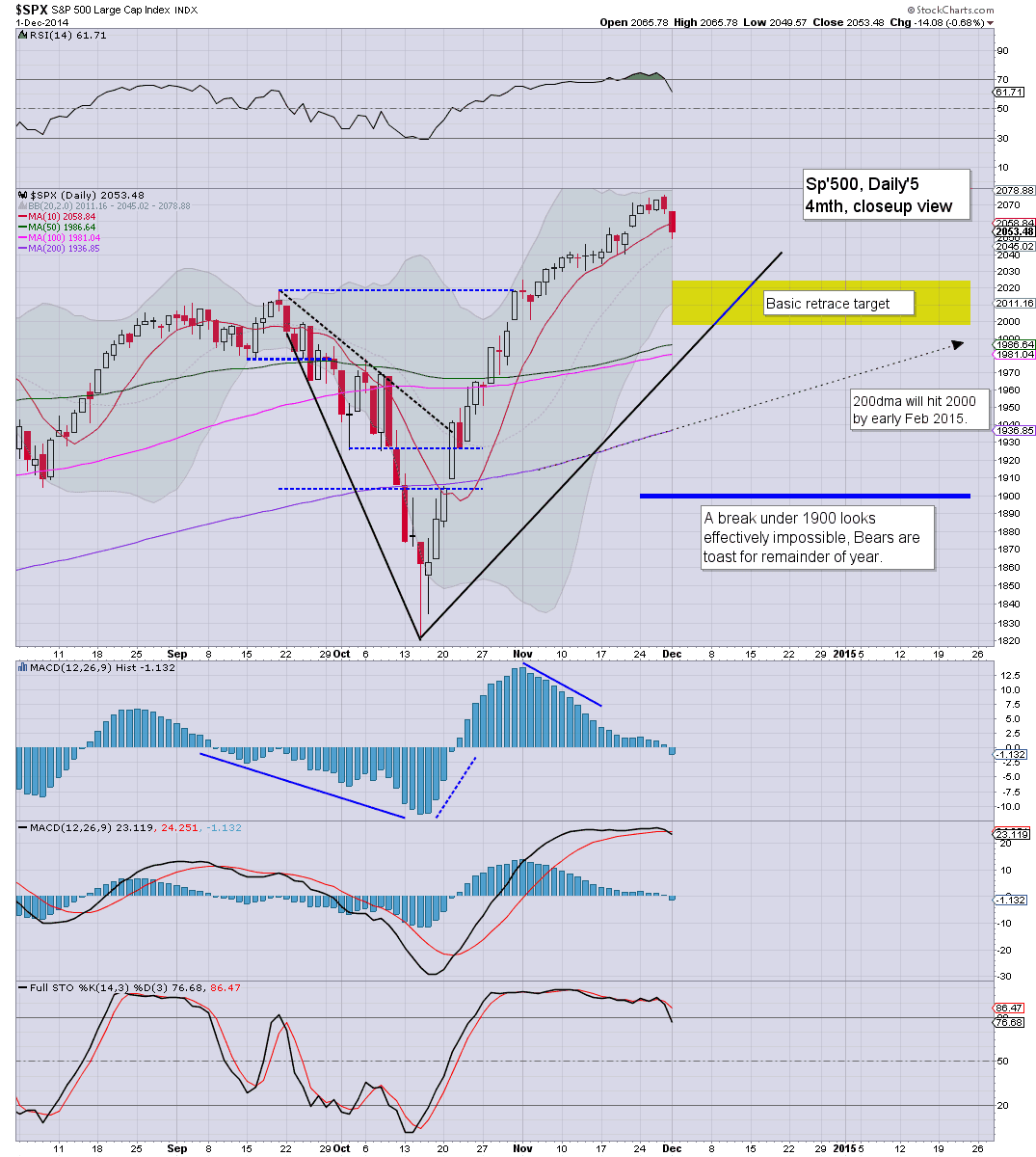 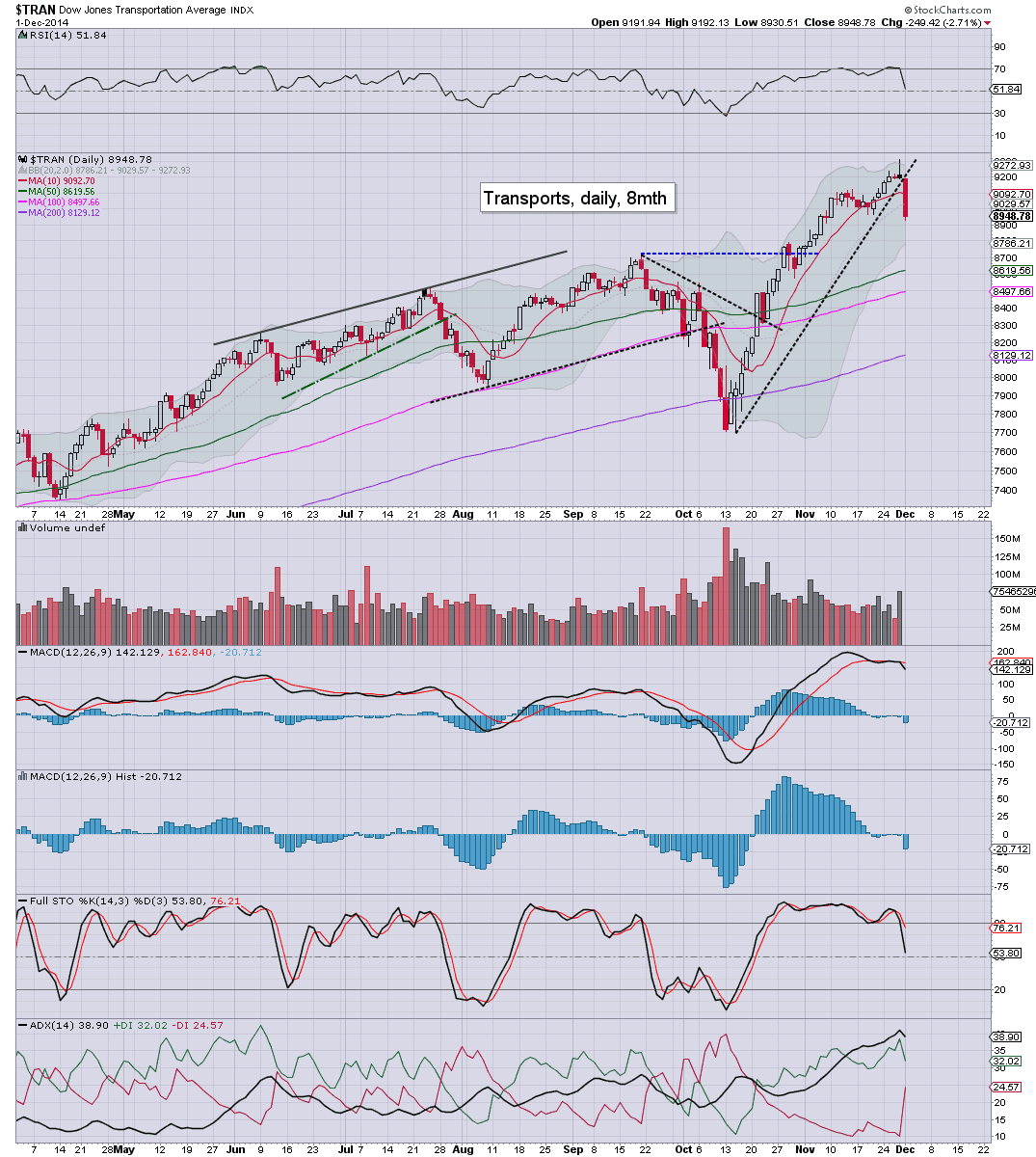 So, a moderate decline for the broader market, but with a pretty significant daily decline in the Trans. No doubt, the bounce in Oil prices put downward pressure on this sector today.

In terms of a retrace, best guess remains sp'2020/00. A sustained period of trading under the giant 2000 threshold looks unlikely. After all, the BoJ will be out there buying. We've not forgotton about them already.. have we?

The opening weekly 'rainbow' candle is blue.. and with the 10MA around sp'2000... it makes for a natural retrace target... but more viable next week. 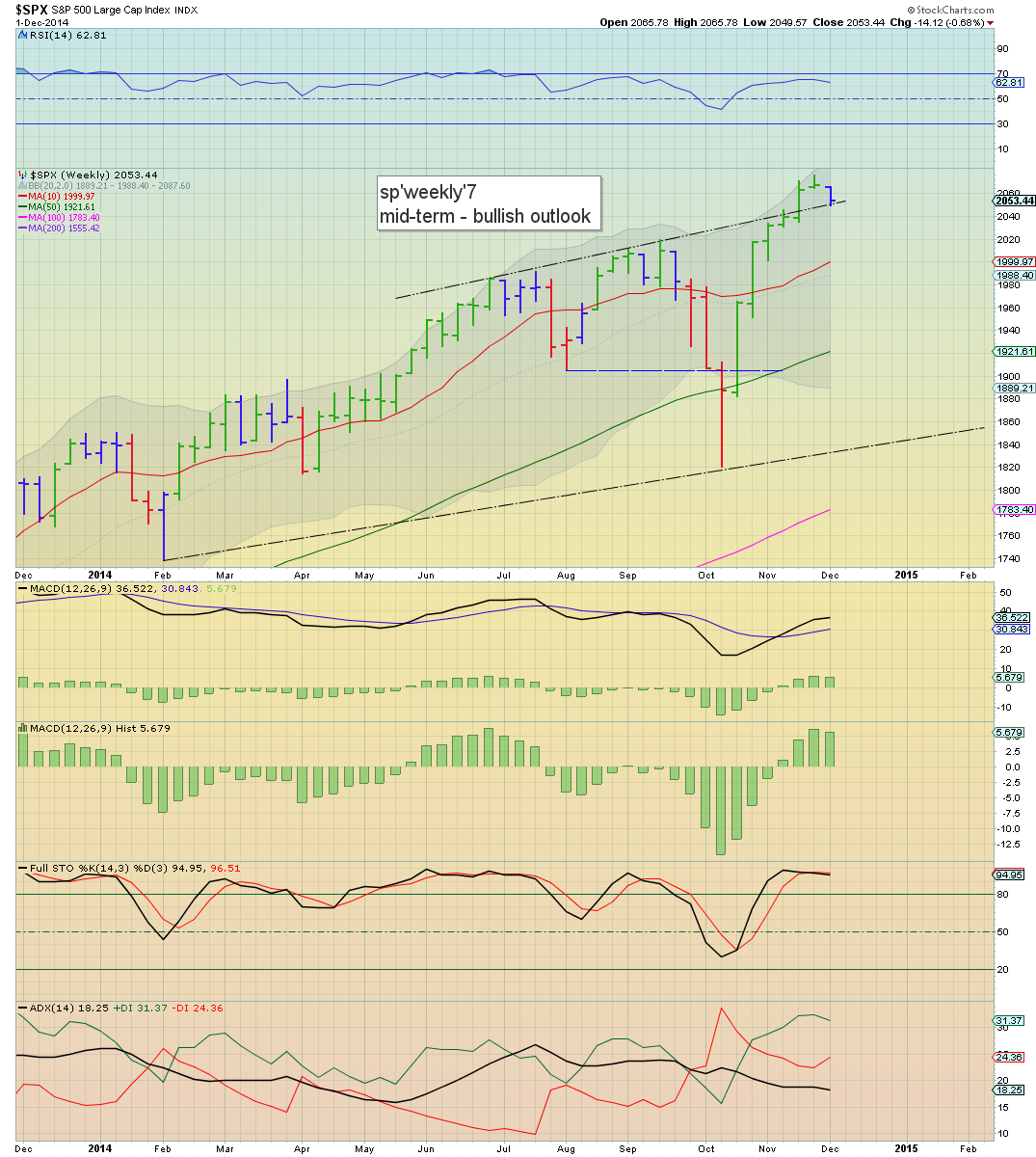 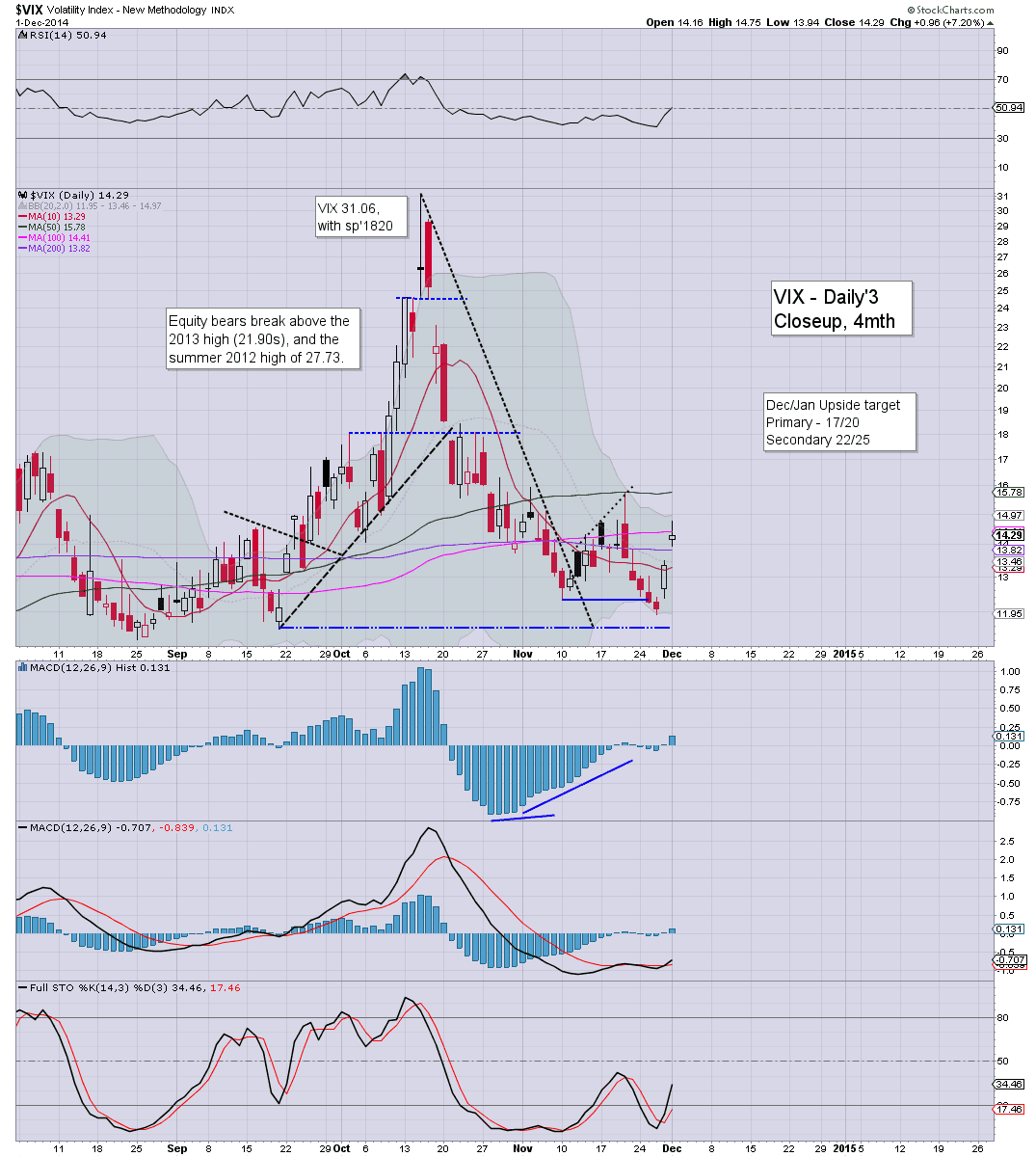 At best, a move into the 17-20 zone, but considering the broader hyper-ramp from mid October, a sustained move into the 20s looks highly unlikely.
--

The only data of note is construction spending.

*there are two fed officials on the loose, and as today showed, market remains particularly attentive to any mention of interest rate hikes.
--