With equities closing lower for the third consecutive day, the VIX was finally able to hold onto gains, settling +4.9% @ 12.72. Near term outlook is for continued equity weakness to sp'2080, which should equate to VIX briefly in the 15s. The key 20 threshold looks out of range in the new up cycle. 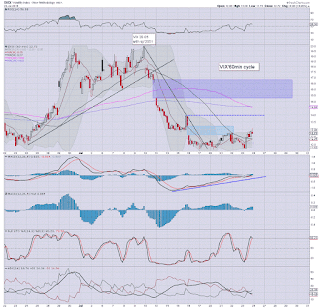 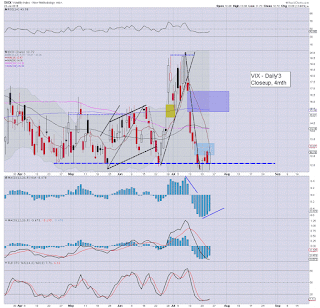 Despite a touch of cooling into the close, VIX at least managed some gains, a weekly close in the 13/14s still looks viable. The 15s look possible next Mon/Tuesday.

The big 20 threshold looks out of range until at least late August. 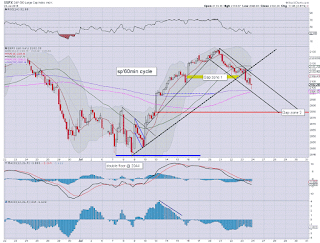 *awaiting earnings from the much beloved hysteria/momo stock that is AMZN. From a pure technical perspective, its due a smack down.. to the 420/410 zone.
-- 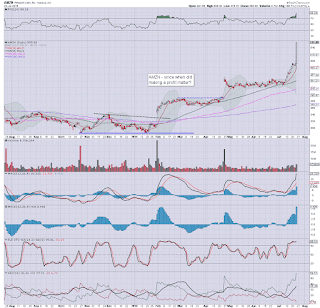 Surprisingly... AMZN actually turned a profit in Q2.. a monstrous 19 cent profit... a PE somewhere in the 500s.

As ever... that kind of nonsense is why I don't meddle in it. Pure... market madness.
--
more later.... on the VIX
Posted by Trading Sunset at 21:02:00
Email ThisBlogThis!Share to TwitterShare to FacebookShare to Pinterest 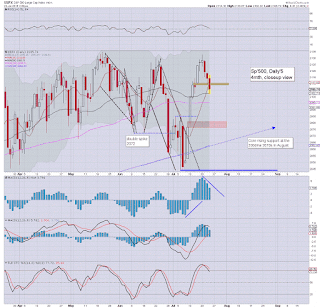 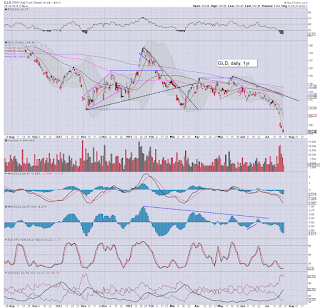 An interesting... if somewhat subdued day.

Clearly.. near term remains weak.... and VIX is not going to start spiking until 2100 is broken below.

After all, I see plenty of talk of a bounce first to 2110/15 zone. Its possible, but momentum IS swinging toward the bears.

*awaiting with interest - from a pure entertainment perspective, AMZN earnings. The Monday closing candle is warning of a post earnings smack down.

I'd sure not be long... but then neither would I short that nonsense.. after seeing the market ramp it many times across the last few years.. despite persistently trashy earnings.


--
updates into the close... unless I fall asleep

2080 tomorrow?   hmm
Posted by Trading Sunset at 19:52:00
Email ThisBlogThis!Share to TwitterShare to FacebookShare to Pinterest 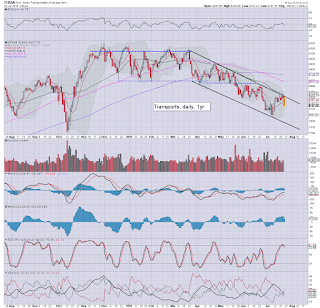 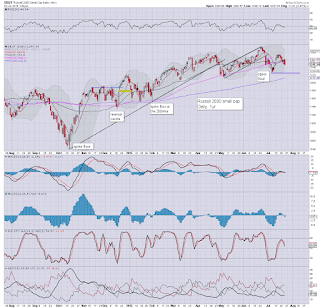 Regardless of any minor bounces... we do look headed for sp'2080.

Posted by Trading Sunset at 18:54:00
Email ThisBlogThis!Share to TwitterShare to FacebookShare to Pinterest

US equities are increasingly weak, with a daily close under the sp'2100 threshold now viable. VIX is battling for the 13s, which will open the door to a brief spike into the 15s. Renewed equity upside into August.. from sp'2080 looks probable. 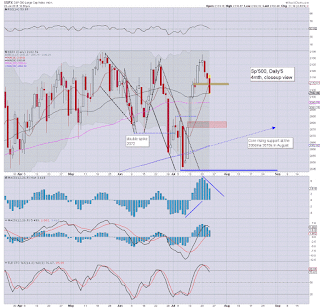 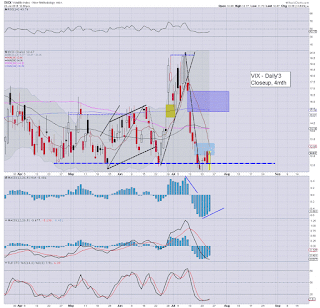 With too few buyers... a third net daily decline looks a given. The only issue is whether the VIX can finally attain a close in the 13s, which should confirm the 15s will be hit... whether tomorrow.. or early next week. 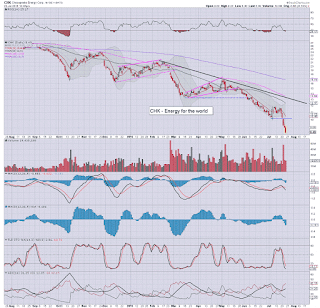 A truly dire year... original target of $7s.. almost hit.. and that is with the broader equity market holding still near highs. If sp' loses 2K within the next 2-3 months.. CHK will surely hit $5.

In some ways.. similar to BTU.. although I don't expect CHK to disappear.
Posted by Trading Sunset at 17:51:00
Email ThisBlogThis!Share to TwitterShare to FacebookShare to Pinterest

With no buyers out there, equities have been unable to sustain earlier minor gains, breaking under sp'2110. As things are, VIX is not yet showing any concern.. as the market is still holding the big 2100 threshold. However, a break into the 2090s should see VIX finally break.. and build gains. 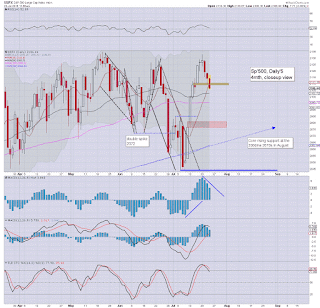 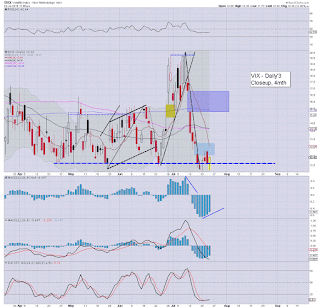 A third net daily decline now looks a given. Is it time for the Fed to start rumouring QE4 yet?

A retrace to the lower gap zone of sp'2080.. along with VIX 15s looks increasingly probable.

All the bears need now is for AMZN to get trashed 15/20% overnight.

--
time for tea.. or something
Posted by Trading Sunset at 16:59:00
Email ThisBlogThis!Share to TwitterShare to FacebookShare to Pinterest

US equities remain somewhat choppy... battling to hold the Wed' low of sp'2110. VIX remains subdued, -2% in the 11.80s. Despite the chop, renewed equity weakness looks highly probable, with an eventual cycle low of sp'2080, with VIX 15s. 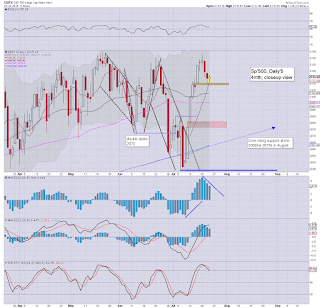 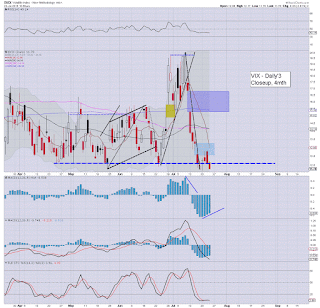 All things considered though, I sure don't see many buyers at these levels. From a pure cyclical perspective, we're still due to cool into early next week.
-
notable weakness: QCOM -3.4%... which is a somewhat ugly reversal from the initial post earnings gains.

US equities open with some minor chop, but are looking increasingly vulnerable across today, and likely.. into early next week. There remains significant probability of a full retrace to around sp'2080.. along with VIX 15s, before renewed upside into August. 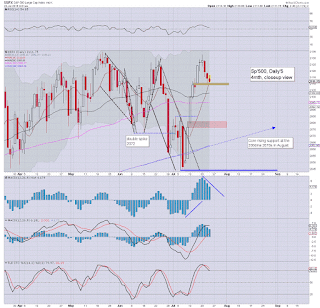 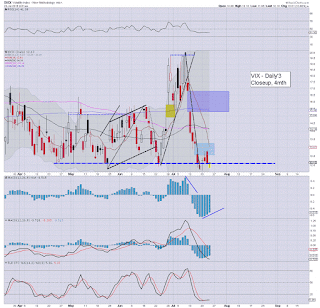 *opening reversal candles starting to appear.. as buyers are simply absent at these levels.
--

Daily MACD (blue bar histogram) cycles for equity indexes and the VIX are both continuing to turn back toward the equity bears.

However, at the current rate, we won't see a more significant move for another 2-3 days, so the best case target of 2080 does not look viable until next Mon/Tuesday.
-- 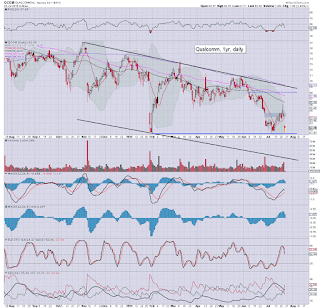 Ugly daily chart across the past year. My broader downside target is 58/54
-

Equities set to break new retrace lows.. <2110.
Posted by Trading Sunset at 14:52:00
Email ThisBlogThis!Share to TwitterShare to FacebookShare to Pinterest 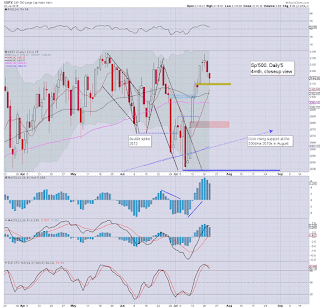 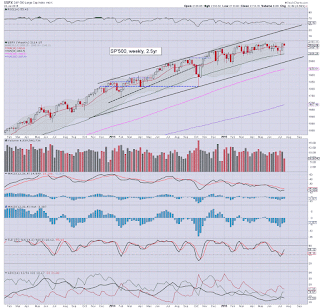 *so far this week, we're net lower by 12pts, a mere 0.6%. Clearly, the market is largely consolidating after last weeks strong gains.
--

Breaking the recent high of sp'2132 looks out of range in the near term.

VIX remains broadly subdued, but once the 2100 threshold is taken out, market should get a little twitchy, and the VIX should finally spike higher. As ever though, even if the 15s are hit.. they will be VERY brief... before renewed cooling to the 12/11s.
-

AMZN have earnings at the close, and I think that stock will be particularly vulnerable. From a pure chart perspective, the stock looks due a smack down, with a precursor warning on Monday, via a black-fail closing candle.

-
*I think I could probably sleep another ten hours.. but I shall battle across the day! If I disappear though, its because I've fallen asleep on the sofa.
-

Have a good Thursday.
-

For the gold bugs out there... the pain is set to broadly continue to the giant $1000 threshold.. and that of course has dire implications for the related miners.
Posted by Trading Sunset at 12:47:00
Email ThisBlogThis!Share to TwitterShare to FacebookShare to Pinterest 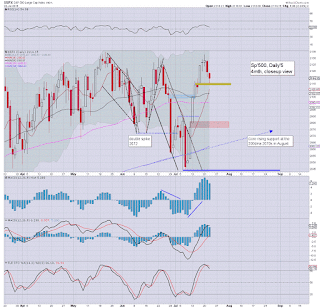 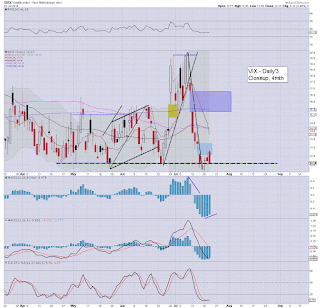 So, a second day of weakness for the broader equity market, but for the bears, it remains a problem in that the declines are only minor, and this is being reflected in the VIX.

Best bear case in the near term remains a hit of the secondary gap zone of sp'2080. Considering the price action in the VIX today, that might only equate to VIX 15.30s (lower end of gap zone).. at best... and very briefly.
--

Thursday will see weekly job claims and leading indicators. In the scheme of things though, market will be paying more attention to corp' earnings.

*AMZN will post earnings (or the usual.. lack of)... at the close 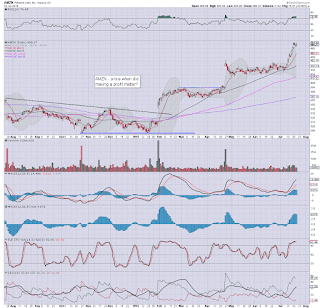 The daily black-fail candle seen on Monday likely marks a near term top...  first downside is around 420/400.. a clear 15% or so lower. As ever though, being a profitless momo stock, Mr Market might just ignore another lousy quarter, and still burn out the existing shorts.

Still... those black-fail candles are not to be dismissed lightly. AMZN bulls... beware!
-

Traveling away from the coast, and back into the city is never easy. It has always felt like part of my soul is getting ripped out. This morning was not much different, but this time, I returned with the realisation that my next exit from the city will likely be a one way ticket. That thought is something I am very bullish about!

A glimpse of this morning... 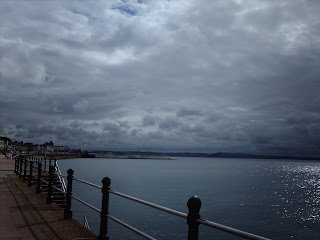 Yeah, I sure could live with waking up to that every day.

.. and thanks for the emails. I've still to reply, as I'm having issues with sending outbound mail.
Posted by Trading Sunset at 01:00:00
Email ThisBlogThis!Share to TwitterShare to FacebookShare to Pinterest
Newer Posts Older Posts Home
Subscribe to: Posts (Atom)