VIX - weekly momentum crawling back up 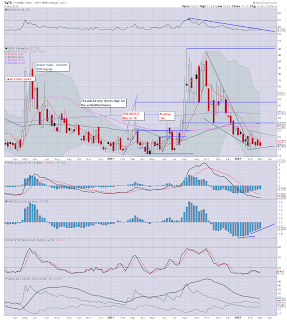 I've been reading around a bit, seems kinda quiet out there. A few of the usual lunatics touting 'to da moon', with a very light sprinkling of the doomers claiming the end of times ain't far off.

From price perspective, we clearly floored around 6 weeks ago. Despite the market making higher highs, the VIX did not, and currently the 16 floor IS holding.
-

Underlying price momentum - see MACD 'blue histogram' section, does suggest that in 2-3 weeks there is significant potential for break upwards.

First target remains a break above recent high of 22, to around the 24/26 level.

*interestingly, upper bollinger band currently permits as high as 33, but by end of next week that will be borderline 29/31.
-

1. I intend to take a look at a number of world indexes - many of which might put everything into a better perspective.
2. Probably some more VIX chatter, especially the various ETFs/ETNs available.
3. A look ahead into next week, and the rest of this month.
--


A note on the 'Greece' thing

Despite ISDA announcing it IS some kind of default, it still remains an utter mess. Who really does have exposure to all this? Will any finance firm implode due to exposure? I'd note very few had considered MF Global would eventually implode.

Clearly, Greece will leave Euro, the pressure continues to build. The only issue is whether its weeks, months, or  years.