The US indexes are still cruising higher. Despite a moderate 89pt down cycle in the sp'500, the market has already rebounded 45pts. There are tentative signs though that a larger move lower is due. The only issue is whether it begins <1687, or from yet another slightly higher high.


Lets take our regular look at six of the US index monthly charts. 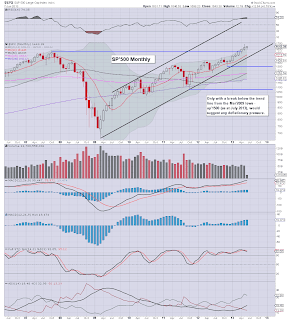 The down cycle from 1687 to 1598 was pretty interesting, but perhaps even more curious is the latest ramp, a 45pt ramp in just 11 trading hours. The next fib level is around 1652, and that looks likely on Monday.

Monthly trend remains to the upside, but with the upper bollinger @ 1653, it is going to be real difficult for the bulls to take out the Bernanke 'reversal day' high. As things are, it has to be said there is nothing bearish yet. The last monthly bearish close was May 2012, and even that wasn't too major. 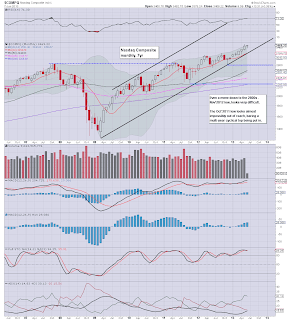 The tech sector is inexorably still climbing, now at month'8. There is no sign of a turn/levelling phase yet,  and we're continuing to scrape along the upper bollinger.

I have to wonder, if AAPL ramps into the low 500s by late June/July, does the Nasdaq Comp have a brief chance at hitting 4000 before the current up cycle maxes out? 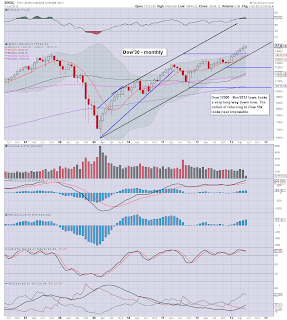 The mighty Dow is the most stable and consistent rising index out there. There is absolutely no sign of a turn to the downside, and near term upside looks to be somewhere in the 15500/750 area. 16k is possible, but not until July. 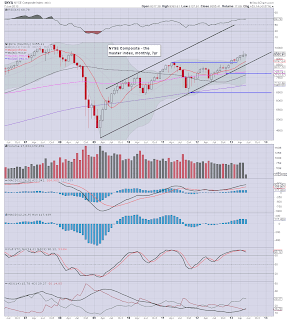 The master index is still ticking higher in price, but underlying MACD (blue bar histogram) cycle is currently ticking lower - although still in positive territory. The May closing candle was a bit spiky, and is suggestive that a multi-month top might have been put in. 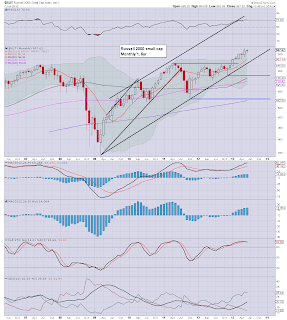 The R2K remains the second leading market index, and is still broadly climbing. The MACD cycle is getting a little on the high side. There are perhaps another 2-3 up months left in the current cycle.

Downside for late summer/autumn looks to be at least 900. A 'doomer' target would be 750, but that would be a rather huge 30% drop from a late July/early August peak. 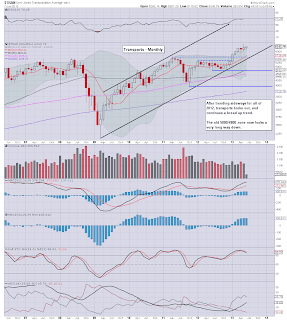 The old leader took out key rising channel support this week in the 6200s. Yet, the weekly close was a strong turnaround, and the Tranny is now making another attempt to get things back onto a fiercely bullish track.

The original target was the low 7000s - by August. I'm now somewhat doubtful of this being viable, with the break of the weekly channel. However, any daily close in the 6600s, would bode for a further 400/600pts higher.

It was indeed quite a dynamic weeks trading for both bulls and bears. A 5% pull back, and seemingly now 'normal service resumes'. The dip buyers are piling in, and the bears are back on the run. Monthly trends are still broadly to the upside, so the bears simply can't get the least bit confident.


When is the significant downside coming?

The recent drop from 1687 to 1598 was interesting, but still, it was only 89pts, that's barely 5%. Certainly, equity bears are looking for much more than that. I have two broad outlook/counts. Effectively, the issue is whether 1687 was the high of this cycle, or if there is yet another high yet to be put in. 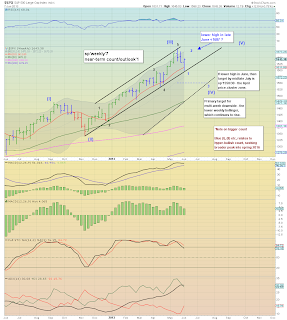 sp'weekly9b (one further high, and the 'doomer outlook') 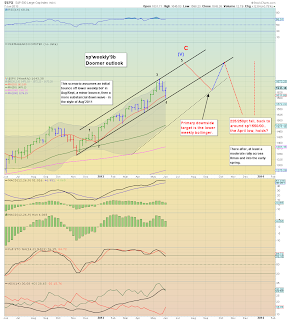 What is my 'best guess' ? My original outlook was for Trans in the 7000s, by August, and I'll stick with that. The following fib chart would be supportive of that outlook. 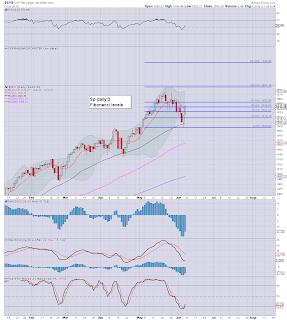 If the recent down wave was sub'4 of big'3, then why can't we be trading in the mid 1700s by late July? A few daily closes in the 1660s should be enough to give good support for a further 5-7% higher.

There isn't anything of note until Thursday, when we have Retail sales data. There are a few things on Friday, but generally..it looks to be a rather quiet week.

*It should be noted, the only significant QE-pomo day is Thursday, $3bn.
--

I remain heavy long, and seeking an early Monday exit in the sp'1650s. It remains a case of 'go long' until we see any sign of a rollover/lower high. It will certainly be tricky once we are trading in the 1660/70s. Arguably, the safer long trade, is after a daily close >1687.

This is the usual macro-economic chatter, but I think for those interested in the bigger picture, its always worth a listen.
Posted by Trading Sunset at 18:05:00
Email ThisBlogThis!Share to TwitterShare to FacebookShare to Pinterest

The main indexes closed higher for a second consecutive day, and thus likely confirming the sp' floor @ 1598. It would seem likely the sp' will be trading the 1660/70s next week. The big unknown is whether we can break the Bernanke 1687 'reversal day' high. 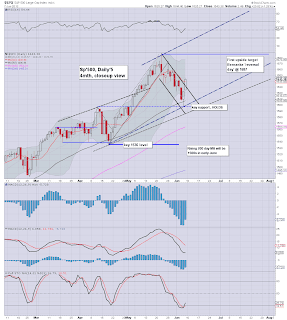 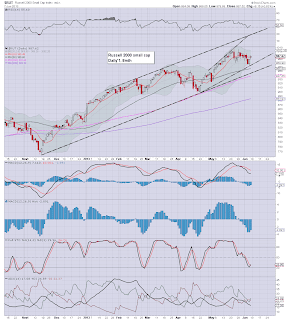 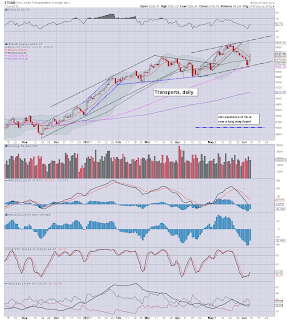 Well, that's another crazy week concluded, at the worlds most twisted and rigged casino. Certainly, it wasn't dull, and that's half the reason we're still part of this, right?

Underlying MACD (blue bar histogram) cycle is now ticking higher on all indexes, and is set to go positive cycle by next Wed/Thursday.

I expect we'll trade higher on Monday, but there is certainly high risk of a 10/15pt pull back, once we've broken back into the 1650s.

There is no significant QE until next Thursday (there was none today), so it remains kinda interesting to see how the market copes without its POMO help.


That is all for today..and the week.

Have a good weekend....and goodnight from London
--

Video from Mr Permabull/Carboni, to conclude the week...

--
*next main post..late Saturday, probably on the US monthly index charts.
Posted by Trading Sunset at 01:00:00
Email ThisBlogThis!Share to TwitterShare to FacebookShare to Pinterest
Newer Posts Older Posts Home
Subscribe to: Posts (Atom)