With equities closing significantly weak, the VIX settled +5.3% @ 26.23. There was a notable opening reversal candle, with a new multi-week low of 21.51. Near term outlook is for renewed equity upside into the sp'2000s, which should equate to VIX in the teens. 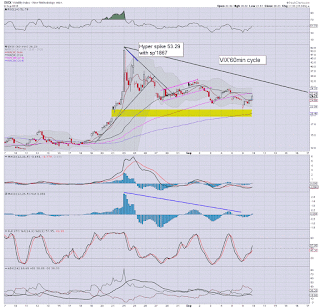 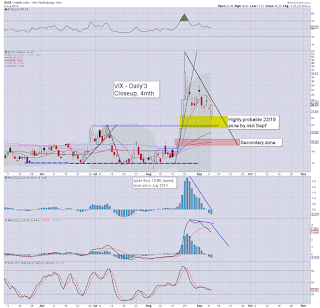 VIX has seen a moderate net daily gain, but broadly, looks set to resume cooling mode, not least if we're trading in the sp'2000s next week.
- 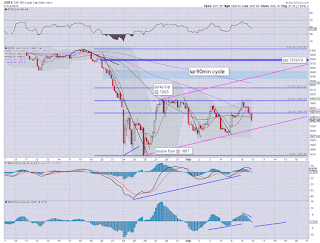 *closing hour: a real train wreck, with increasing weakness into the close.
--

Well, an AAPL reversal was not unexpected, but I sure didn't expect the main market to see this degree of weakness into the close

-
*I hold long overnight, via DIS and USO.
--
more later... on the VIX
Posted by Trading Sunset at 21:02:00
Email ThisBlogThis!Share to TwitterShare to FacebookShare to Pinterest

After an initial ramp to $114.00, AAPL has seen a somewhat unsurprising reversal to the downside.. and now looks vulnerable to the 109s.. whether at the close or early Thursday. Despite the equity decline from sp'1988 to the low 1950s, it does nothing to negate the broader upward battle from 1867. 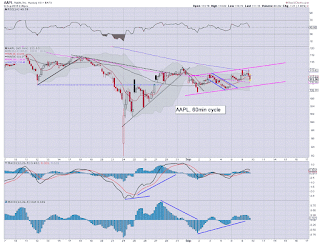 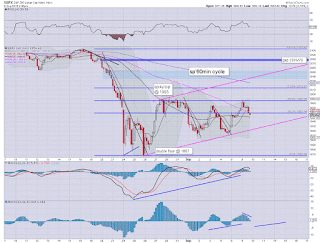 So... a rather classic reversal in AAPL... and it was one reason I wanted out of AAPL yesterday morning. Many are well aware of how AAPL can trade lower after such an event.

--
I hold long DIS and USO overnight. Naturally, I am early on both entries, but I'm content with the entry levels, and I should be able to claw out of those across the next few days. 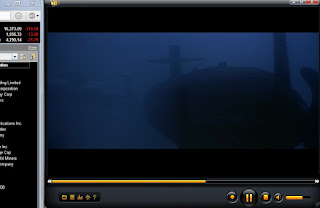 back at the close.
Posted by Trading Sunset at 19:50:00
Email ThisBlogThis!Share to TwitterShare to FacebookShare to Pinterest

2pm update - was the Ipad PRO not big enough?

US equities are increasingly weak, and even AAPL has already turned back to red. Amongst an array of various tech' updates, the new AAPL Ipad PRO at 12.9 inches.. was it simply not big enough to please Mr Market? With the sp -7pts in the low 1960s.. some of the equity bears will no doubt be getting overly excited about now. 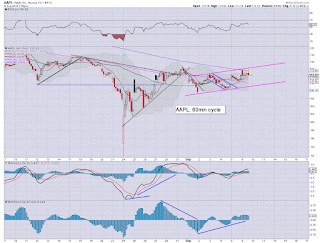 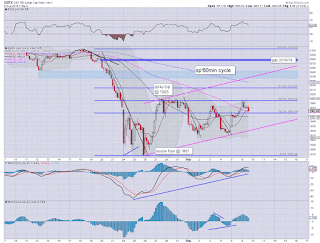 So... minor weakness, and no doubt some will bears will getting overly excited, adding to the short side.

Frankly, that seems only marginally less stupid that those who have been holding short since the double floor of sp'1867. Trend into next week remains UP. 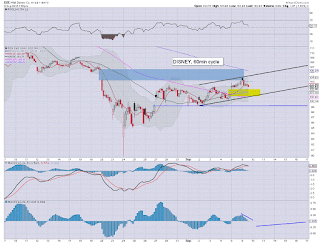 Tomorrow will be interesting.
- 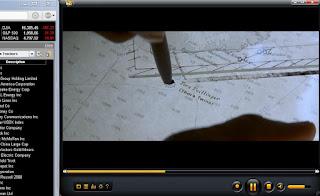 The Hunt for Red October.... its a near perfect movie.... for a down market.
Posted by Trading Sunset at 18:51:00
Email ThisBlogThis!Share to TwitterShare to FacebookShare to Pinterest

Whilst the main market is back to holding minor gains in the sp'1970s, the mainstream media hacks/cheerleaders are about ready for a somewhat stomach churning love fest with Mr Cook and his elite public relations team. As it is.. AAPL remains under broken support of the $119s. 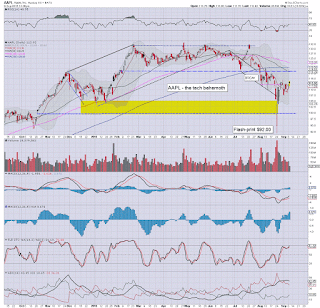 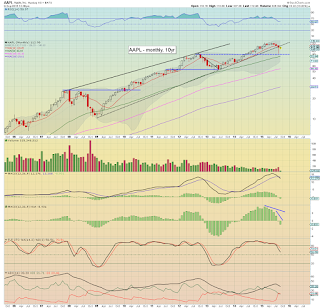 *the current black-fail candle on the daily chart should be not inspiring the bull maniacs.
--

The monthly cycle - which was suggestive of a retrace to the 2012 high around $90, has already come close.. with the flash-print/trade of $92.

With renewed downside in the main market in Oct' , that should again take AAPL to the low $90s.
-

For the moment, I'd consider an AAPL-short after the FOMC is out of the way. Anything above $115 would seem to be a great short entry.

Ohh, and after the tech' announcement this afternoon... AAPL will be highly vulnerable to some sig' swings. I'm glad to be out of that one.
- 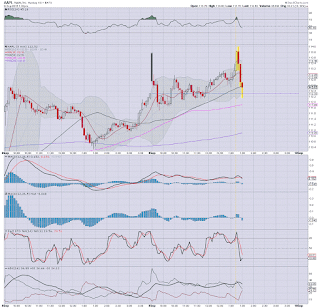 I guess someone decided to sell at $114.00. Or maybe upset that the IPAD pro was not 13 inches?
Posted by Trading Sunset at 17:51:00
Email ThisBlogThis!Share to TwitterShare to FacebookShare to Pinterest

US equities are seeing some minor weak chop, ahead of the AAPL/media love fest. Renewed upside looks highly probable.. whether into the close... or tomorrow, it should make little difference to those broadly long into the FOMC. Commodities are notably weak, Gold -$15, with Oil -1.9% in the $45/44s. 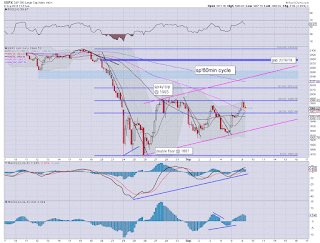 Regardless of any further chop... we look headed for the sp'2000 threshold.. and beyond into next week.

--
I remain long Oil via USO.. and will hold overnight... ahead of the API and EIA oil reports. 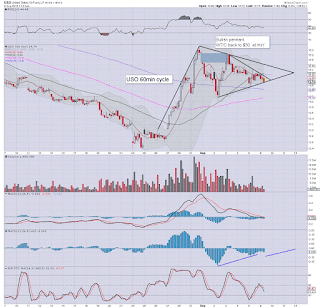 Price structure is a rather clear bullish pennant, and on the bigger daily/weekly cycle, a move to WTIC $50 threshold looks very viable. I'll only get moderately annoyed if <14.20.
-

--
back at 1pm
Posted by Trading Sunset at 16:54:00
Email ThisBlogThis!Share to TwitterShare to FacebookShare to Pinterest

11am update - morning cool down

US equities have quickly cooled from the opening high of sp'1988 to 1969... with AAPL being a leading warning of what is only 'minor trouble'... as part of broader upside into the FOMC. Oil is -1.0% in the $45s, but looks highly vulnerable to breaking upward to the $50 threshold. 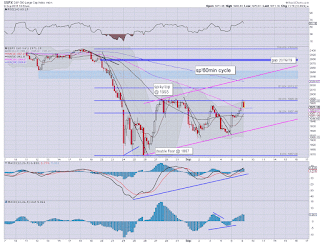 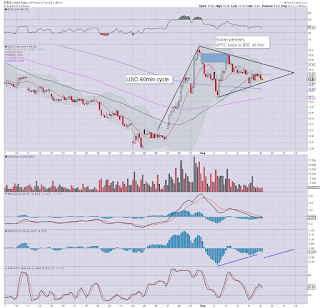 *after some overnight consideration.. and with price action/structure as it is, I'm long Oil - via USO from $14.82. It is a micro sized position. I have little interest in being heavy long.. or short.. ahead of the Fed.
--

No doubt the media will be prepping for their love fest at the AAPL tech meetup.

--
time for some sunshine... back at 12pm
Posted by Trading Sunset at 15:55:00
Email ThisBlogThis!Share to TwitterShare to FacebookShare to Pinterest

US equities open higher, with an early high of sp'1988.. with VIX flashing to 21.51. The mainstream media are naturally getting calmer with each day, but then... they never see anything over the horizon (much like the Fed you could easily argue). AAPL opens higher.. but turns red... ohh the drama! 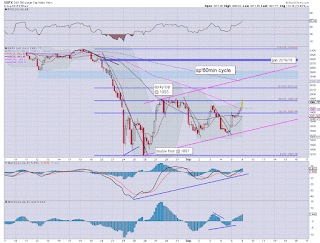 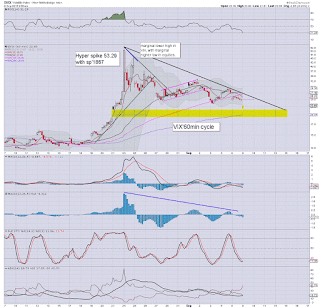 The building talk from the finance TV networks is increasingly laughable.

Endless talk of 'X index is out of correction territory'. Oh yeah.. those same maniacs were even lightly mentioning the possibility of QE4 just two weeks ago.

Now everything is 'fine with the world' according to them.

There is no mention - not that most of the cheerleaders would understand, of the critical trend breaks on the giant monthly cycles (US.. and all other world markets). 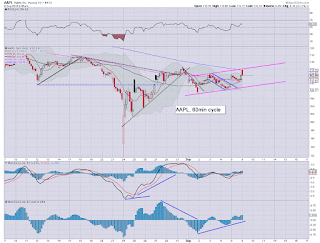 A classic opening hourly black-fail candle. Frankly, if I see the $109s by late day, I'd not be surprised. However, I would not buy AAPL on such a drop. I'm leaving it well alone.... well, thats the intention. 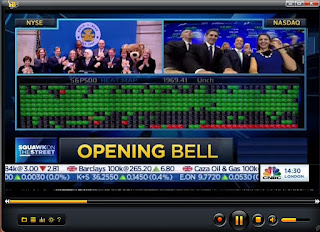 In fact, could the NYSE be any more bearish?
-- 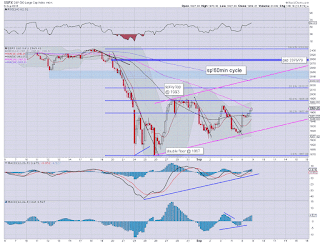 Yesterday should have convinced even the most skeptical of bears that we're headed broadly higher into next week's FOMC. This mornings open will certainly clarify it... along with strong overnight Asia markets.

Broadly though, nothing has changed. The monthly cycles are BROKEN. Unless we close Sept' above sp'2060 or so (above the 10MA), the current up wave is to be treated for what it is.. a bounce.
-

All that is missing is talk about the 'new world economy' and how Aunt Janet will make everything fine again in the world.
--

Once again Morgan is touting the metals as close/having floored (what else would he say?). Until leading names like Morgan capitulate, the precious metals have NOT yet floored. I'm still looking for Gold to at least test the $1000 threshold. If USD battles to the DXY 120s though, then Gold 900/875 zone looks probable.
--

Japan: Some truly wacky upside in the Nikkei, settling +1343pts (7.7%) @ 18770. However, the gain does not negate the underlying bearish break that I highlighted this past weekend.
-

*I've eyes on USO... but frankly, I am not particularly in the mood to hit any buttons today.
-

9.36am..  VERY big black-fail candle on AAPL..    major FAIL to start the day.
Posted by Trading Sunset at 12:00:00
Email ThisBlogThis!Share to TwitterShare to FacebookShare to Pinterest

The four day trading week began on a particularly bullish note, sp +48pts @ 1969. Despite further probable upside into the sp'2000s, the broader picture remains very bearish, with broken monthly cycles, and weekly cycles that are offering the low 1800s, or even 1700s into October. 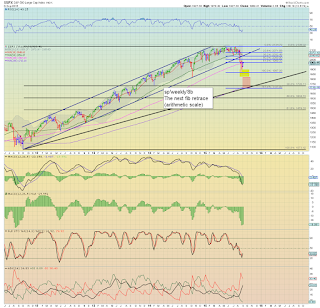 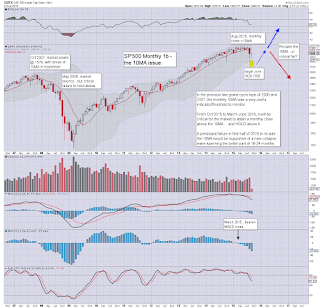 re' monthly1b. Again, the ultimate issue is whether the bull maniacs can re-take the 10MA.. which in my view is rather critical. There will not likely be any clarity on that issue though until spring 2016.
--

Wed' has no scheduled data of note. The EIA oil report is delayed until Thursday, due to the holiday.
--


As for yours truly

Today was okay, having dropped yet another AAPL position at the open. That makes 1 short and 3 longs in AAPL (all good exits), which until a few weeks ago, was a stock I had never traded before.

I'm open to picking up another long position in the immediate term, but not likely in AAPL. As many recognise, AAPL can sell lower after a product announcement, and then remain broadly weak for around a month.

So... right now, I'm considering DIS - although a retrace back to the mid/low $102s now looks out of range, or perhaps long Oil (via USO). Despite the unresolved issue of over supply, a return to the $50 threshold looks probable for WTIC Oil, and there is an equally tempting price gap zone around $55. As it is, I might just sit on the sidelines until the FOMC next Thursday afternoon, and carefully wait to launch an initial market short... preferably somewhere in the sp'2050/70 zone.

What I can't do though is short this market, until we're at least back above the big sp'2000 threshold. For now.. I am most certainly in no hurry to pre-empt the Fed. 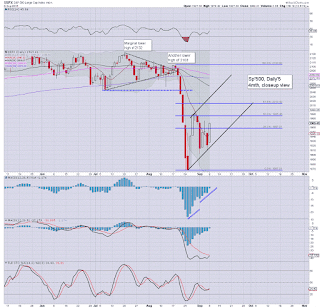 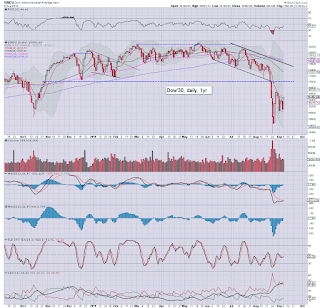 Suffice to add, the underlying MACD (blue bar histogram) cycles are turning positive across all the main US indexes.

From a pure cyclical perspective, the US market is set for broad upside into the latter half of next week.
--