With the main indexes closing higher by around 0.75/1.0%, the VIX closed 4.5% lower @ 17.58. Considering the uncertainty of the election, and the many lurking econ-time bombs out there - not least the fiscal cliff, it is remarkable that the VIX remains <20. 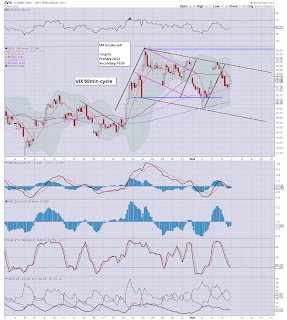 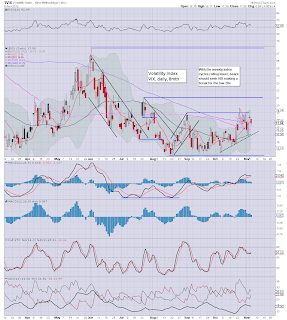 If you take a slightly broader perspective, the VIX remains in a slow, but steady uptrend since the QE index highs in mid-September. Yet, its taken almost 7 weeks to crawl from the low 13s to 17. That is a very marginal increase, and as I keep noting, until the VIX starts closing >20, this really is a very low..and unreliable VIX.

more later
Posted by Trading Sunset at 23:00:00
Email ThisBlogThis!Share to TwitterShare to FacebookShare to Pinterest

A very slight rollover this afternoon, but the broad market closed with gains of around 0.75-1%. All things considered, another victory for the bull maniacs who think everything will be fixed once a new man takes command of the American empire.  Clearly, GDP is about to soar from tomorrow morning onward. 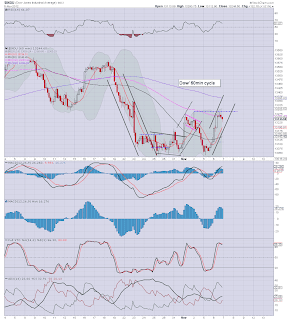 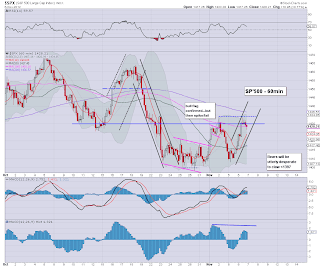 Another day for the bulls to have a good laugh at, not least the nonsense that was the sudden ramp at 11.30am..all based on the usual rumours, lies, and utter delusion.

The hourly charts are certainly at the high end, in terms of the MACD (blue bar histogram) cycle, but its election time, and almost anything could happen at the Wednesday open.

As has been the case since the QE spike highs of mid September...bears have to break the key cycle low of sp'1397.

more later
Posted by Trading Sunset at 21:01:00
Email ThisBlogThis!Share to TwitterShare to FacebookShare to Pinterest

With one trading hour left, the market is still holding onto effectively all of the gains. A close >1436 would be extremely bullish. Right now, bears can only 'hope' for something <1427. Despite the uncertainty of the election, VIX is 6% lower, and showing no sign of levelling out. 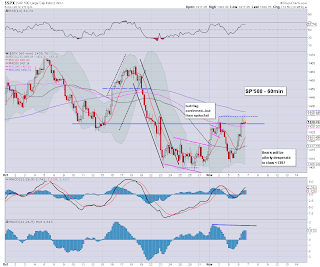 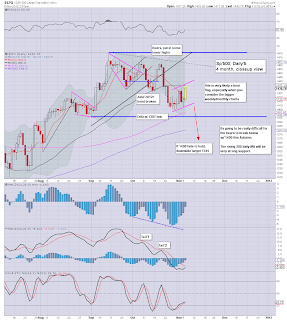 A rough day in bear land, there can't be many left to be short-stopped out now.

Bulls are starting to get more confident about a post election super ramp into year end, sp'1500/50 is within their sights.

Weekly/monthly charts are still suggesting weakness, although that signal will vapourise if we get a few closes >1440/50.

A long night ahead, and as many realise, there may be no clear result for some days..even weeks.
-

More after the close.
Posted by Trading Sunset at 19:53:00
Email ThisBlogThis!Share to TwitterShare to FacebookShare to Pinterest

Mr Market is holding onto gains of around 1%, an election day rally, one to reassure the voters that financial markets are both stable..and strong. 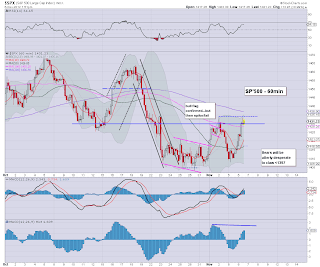 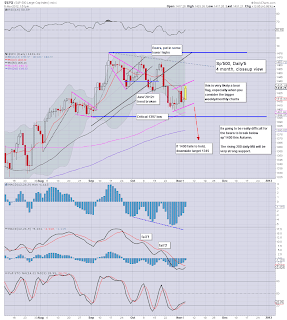 With two hours to go, lets see how we close. There sure doesn't feel like there is any downside momentum right now, but across the previous 7 trading days, we've seen 5 such rallies fail.

Until we get a daily close >1445/50, it remains a bear flag on the daily chart..and those weekly/monthly cycle charts all suggest underlying weakness.

As ever....good short-stops will be useful for anyone still on the bearish side of the fence.

back at 3pm
Posted by Trading Sunset at 18:56:00
Email ThisBlogThis!Share to TwitterShare to FacebookShare to Pinterest

We're seeing a lot of the weaker bears getting short-stopped out, and a few bulls are starting to chase this market higher. Volume (I believe) remains relatively light, as most of the bigger players are content to wait for clarity into tomorrow. 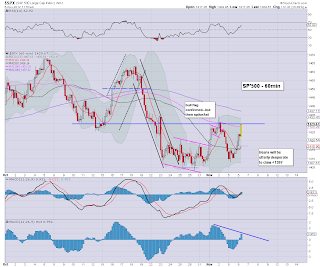 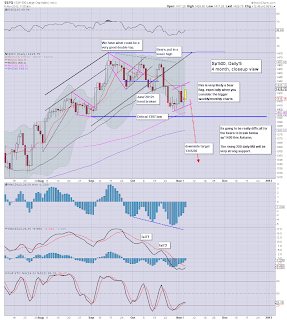 We're back at the old resistance zone of 1430 again, bulls would most certainly be seeking a close around here.

I can understand those bears who are now fearing a mega post-election ramp into the 1500s. It is viable, we'll know if we get a close >1445/50 later this week. Yet, the daily charts are still sporting clear bear flags, and until we break significantly above them, they are still...bear flags.

I'll be glad when this election uncertainty is over with. Its really starting to annoy me.

time for lunch, back at 2pm
Posted by Trading Sunset at 16:55:00
Email ThisBlogThis!Share to TwitterShare to FacebookShare to Pinterest

Since it is election day, it would be somewhat surprising if we do anything other than minor chop today. I'd guess we'll close within the war zone...somewhere in the range of 1420/00. VIX will probably close a little higher. 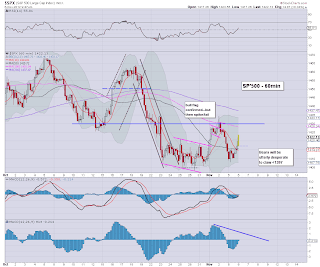 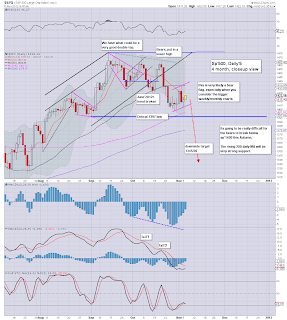 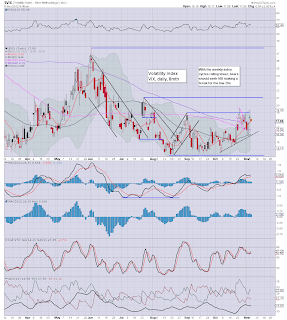 We still have pretty clear bear flags on the daily index charts. Essentially, the bears have leeway up to around sp'1440. Any daily closes over around 1445/50, and the near/mid-term bearish scenarios will have to be thrown into the trash.

*I am still guessing Obama wins a second term, although it may take some days, even a week or two to clarify the result. If it does drag out, then Mr Market won't be entirely pleased, just like in 2000.

back at 12pm
Posted by Trading Sunset at 14:49:00
Email ThisBlogThis!Share to TwitterShare to FacebookShare to Pinterest

Whilst the main indexes are trading a mere 4% from the QE3 spike highs, the bigger index cycles continue to warn of trouble into year end. The weekly charts suggest a brief move as low as sp'1345/20, whilst the monthly charts suggest sp'1200/1175, the latter of which would probably equate to VIX back into the 30s, if not 40s. 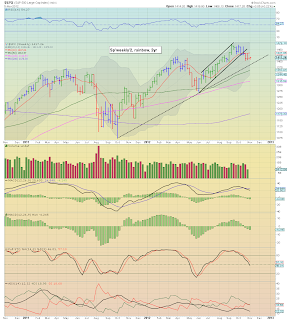 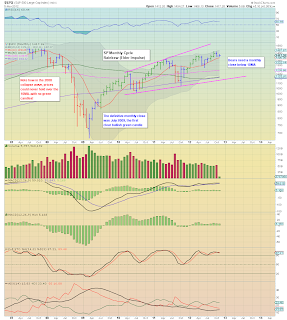 With Monday being a somewhat choppy day, Mr Market is clearly waiting to find a direction. Once we get past the election, the market will surely have chosen whether to break >1440..and proceed to new index highs, or..to have broken 1400...and take a swift trip to the low 1300s.

Rather than getting lost in such daily noise though, I remain trying to view things from a bigger perspective. The weekly charts do suggest if we can get a daily close under the key cycle low of sp'1397, then we should see a further 4-6% decline across a few days. 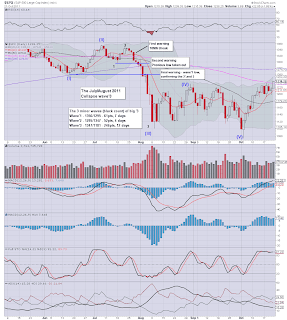 I will continue to keep noting, the bears are yet to put in a lower high on the bigger weekly/monthly charts. Until we see a break lower, a bounce, and THEN a lower high, any potential collapse wave (like May'2010 or July/August 2011) seems very unlikely.

A choppy pre-election Monday for the US markets. Opening minor declines of sp 5pts only held for an hour, and then crawled higher across the day. A closing hour mini-ramp saw the sp' try to close >1420, but it failed. The bulls sure are seeing a lot of failed rallies lately. 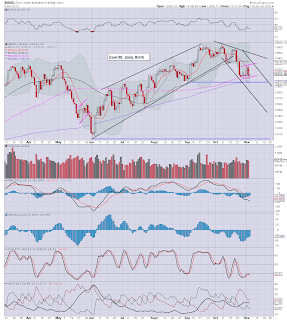 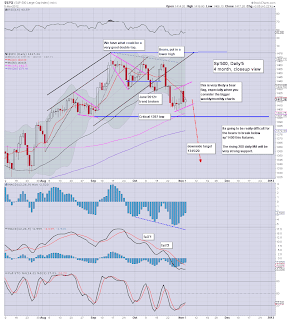 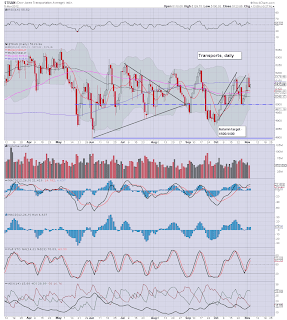 The main indexes continue to have very clear bear flags on their daily cycles. The Sp' is trapped back within last weeks war-zone of 1420/00.

Clearly, any intra-day break under dow 13k, sp'1400, will very likely be an important moment for the market this autumn, and will likely see the VIX break back into the 20s.

*I'm guessing Obama wins a second term. That would surely annoy the republicans, to the extent they'll largely refuse to compromise to delaying the fiscal cliff. If that is the case, then Mr Market will need to significantly factor in a GDP drop of -2 to -5%. - and that's even when assuming 'everything else is okay'.

We may have some very interesting and exciting trading days and weeks ahead.