With the indexes closing moderately higher, the VIX saw a very clear 5 micro-waves lower across the day. The VIX closed -8.2%, to settle the week @  12.46. There was a minor recovery spike higher in the brief 15mins of after hours trading. 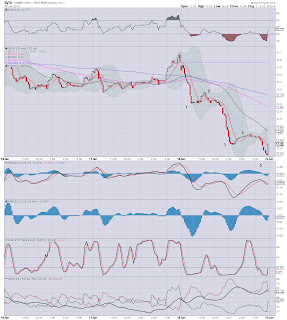 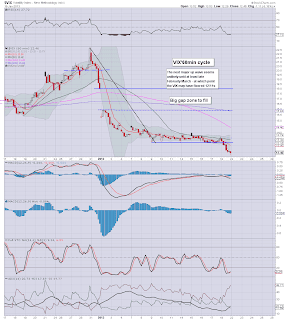 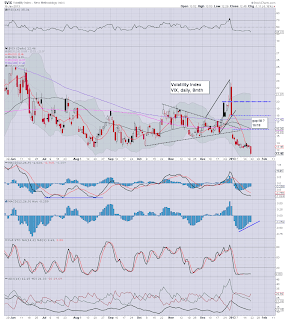 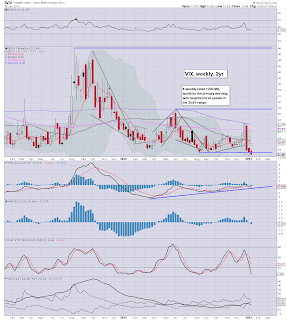 I really liked watching the VIX today, it put in what some might agree was a very clear 5 wave decline - seen best on the 5 minute chart. Even the last hour of trading looked very clear, with a nice rollover, and what I am guessing was a final fifth micro-wave lower..and thats where I jumped back onboard!


Back onboard the VIX train

I picked up a March VIX call block in the closing hour. Having exited my Jan Call block when VIX was 22.20 on Monday Dec'31st, I am very content with my re-entry in the VIX 12s. On any basis, it seems like a very reasonable level to be back in at.

I suppose we could trade into the 11s (briefly) next week, but I really only see that happening if the SP' somehow breaks into the sp'1500s, and I don't expect that until after a much needed index retracement.

A very quiet end to the week, a little weakness in the morning, but as has been the case lately, the recovery in the afternoon always negates the declines. The close in the 1480s is very bullish for the mid-term. VIX closing in the 12s is a remarkable sight. 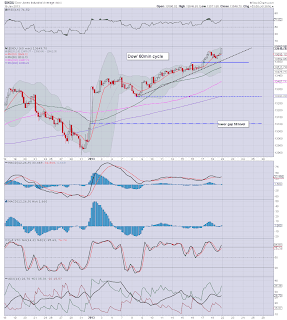 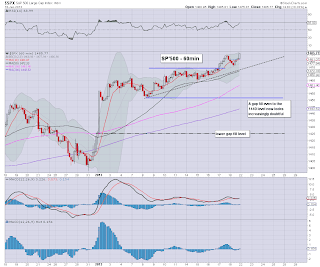 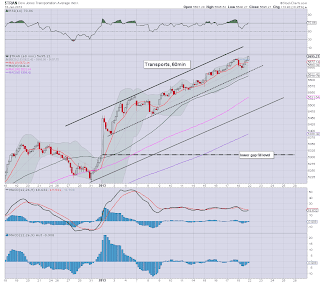 A long weekend ahead (we're closed on Monday)

Its pretty funny how the market makers managed to pin AAPL @ $500 at the close of this January opex, which will doubtless annoy not only the $500 put holders..but also the call holders!

Posted by Trading Sunset at 21:02:00
Email ThisBlogThis!Share to TwitterShare to FacebookShare to Pinterest

Looks like a possible fifth tiny wave lower on the VIX - and a corresponding higher wave in the indexes, is underway. A low volume algo-bot push to wash out the bears before the weekend. 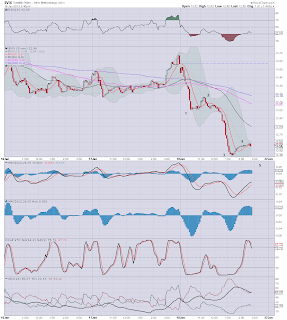 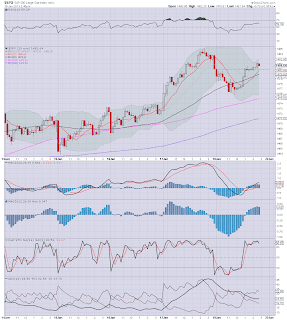 *still waiting to pick up a new VIX call block...depends on how the next 30mins go...
Posted by Trading Sunset at 19:47:00
Email ThisBlogThis!Share to TwitterShare to FacebookShare to Pinterest

2pm update - indexes near the ceiling

We are probably near the ceiling for the indexes. I don't expect yesterdays sp'1485 high to be taken out today, getting stuck around 1482/83 ? VIX 11s look just too far out of range. Metals showing some weakness now. 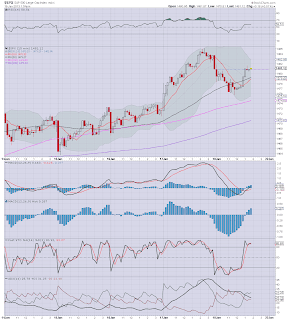 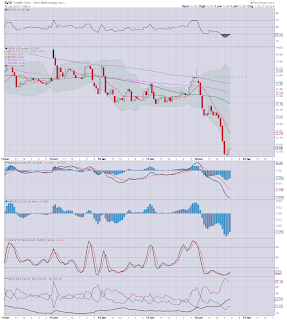 Still seeking a retracement in the indexes to the low sp'1440s, with VIX at least in the low 16s, which now seems viable late next week.
--

Despite a 3 day weekend ahead, with the smaller cycles as they are..I think I might pick up that VIX call block. March 19s look nice. 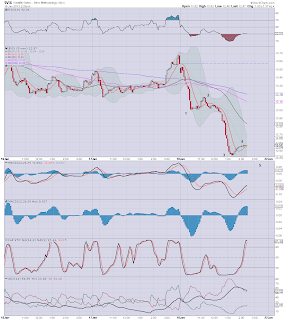 As it is, I'm still waiting.
Posted by Trading Sunset at 18:56:00
Email ThisBlogThis!Share to TwitterShare to FacebookShare to Pinterest

With the SP' 15min cycle still crawling higher, the VIX remains under renewed minor pressure, and we've seen a break into the 12s. Just 14 trading days ago, I don't think even the most deluded bullish cheerleader on clown TV would have dared believed we'd be seeing VIX 12s. 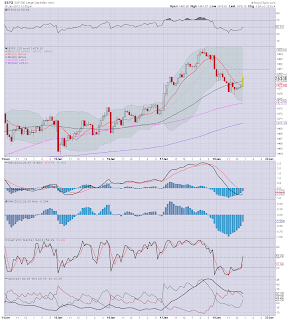 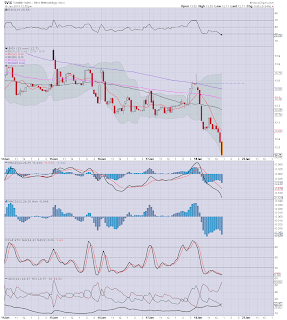 *I'm still looking to pick up a VIX call block...no hurry though.
Posted by Trading Sunset at 17:53:00
Email ThisBlogThis!Share to TwitterShare to FacebookShare to Pinterest

A quiet end to the week where we broke the key 1474 high. VIX is lower, holding the 13s, but 12s seem very likely this afternoon, and that would be a tempting level to pick up some VIX calls, after dropping them at 22.20s. 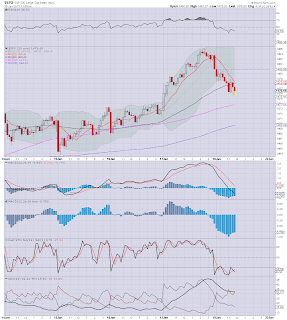 *time for lunch..back at 2pm
Posted by Trading Sunset at 16:56:00
Email ThisBlogThis!Share to TwitterShare to FacebookShare to Pinterest

The VIX has fallen massively since the spiky high of 23.23 in AH on Friday Dec'28. We might even fall into the 12s later today, but on any basis, the VIX is crazy low. I have to expect a spike into the 16-18 gap zone within the next week or two.

The smaller cycles which I am watching... 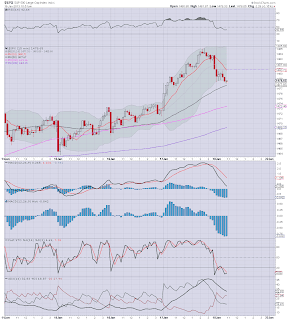 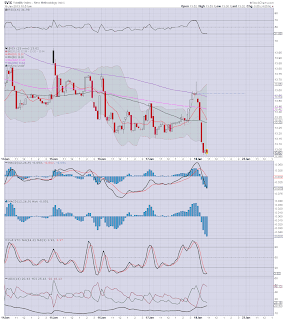 The MACD on the 15min index charts is low, its very likely we'll crawl back higher..and that will surely put some more pressure on the VIX.

VIX in the 12s seems likely within the next few hours.
--

There is no hurry though..its a rather quiet Friday.
Posted by Trading Sunset at 15:52:00
Email ThisBlogThis!Share to TwitterShare to FacebookShare to Pinterest

10am update - a long weekend ahead

Good morning. Mr Market seems exhausted. We've had a very strong 86pt gain on the sp'500 over the last 14 trading days, and with the VIX in the low 13s...you'd have to believe a retracement is coming sooner, rather than later.

The natural levels would be... 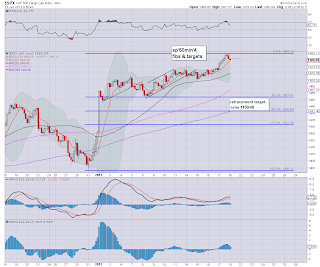 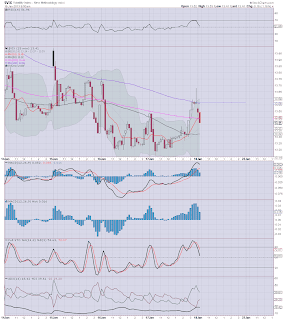 I'm not expecting anything significant today, but its a reasonable day to re-position.

Having exited VIX @ 22.25, going back in at this level seems pretty 'fair' on any basis.

Seeking a spike into the low 16s at least.
--
Posted by Trading Sunset at 14:51:00
Email ThisBlogThis!Share to TwitterShare to FacebookShare to Pinterest

Flying above the clouds

With the indexes higher yet again, and taking out the important sp'1474 high from last September, the market really is starting to fly now. There is plenty of empty air into the low/mid sp'1500s, and even the looming threat of another debt ceiling argument doesn't seem to be bothering Mr Market anymore.

Lets take a rare look at the SP'500, from above the Ichimoku clouds. 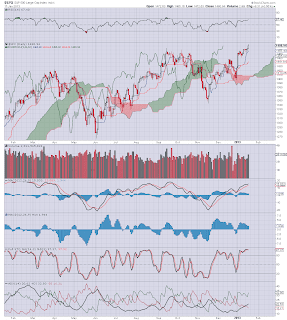 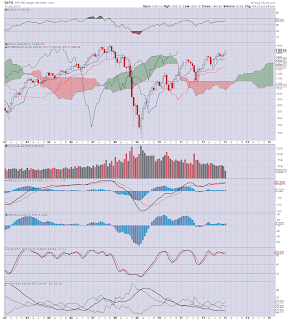 I should note, I post the above charts merely as a curiosity than anything else. I occasionally see other posters highlight the Ichimoku cloud charts, but its not something I am at all well versed in.

The monthly chart is somewhat more interesting, in that is does show how there was ample warning of 'trouble ahead', when the cloud was first pierced in July 2008.

You can see that right now, the cloud is way down around sp'1125.

So, in theory..even a very large 20% market fall of 300pts would NOT break into the cloud..and cause any major bearish warnings to trigger.

We are in an incredibly strong market, one that is able to sustain a major 20% decline..and still be outright bullish!

--
*market is closed on Monday, so we have a long 3 day weekend ahead.

The main indexes closed around 0.6% higher, with the Rus'2000 and Transports leading the way higher. With the break over sp'1474, the provisional bullish warning - from the trans/R2K, was confirmed, and it would seem there is a considerable way higher yet to go.

With today's break >sp'1474, Its probably useful to consider all of the six main indexes. 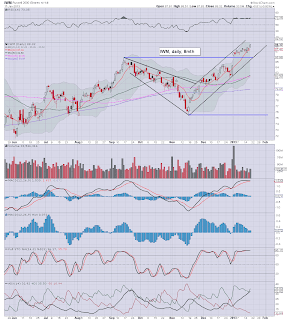 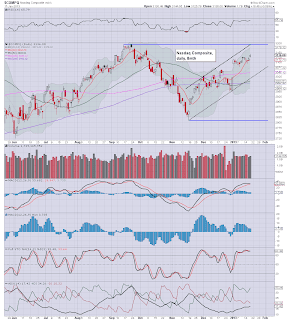 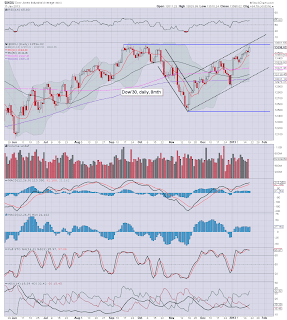 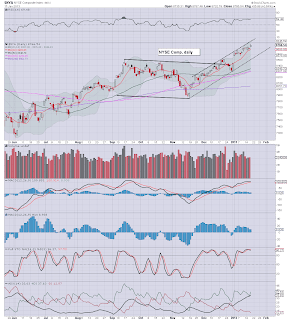 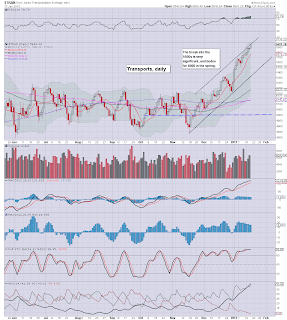 So, we have the Rus'2000, Trans, NYSE Comp, and now the SP'500 above their highs from Sept'2012. Only the Dow and Nasdaq are yet to make the break, and the Dow could easily do that tomorrow.

More than any other chart, the Transports daily is becoming ever more impressive. Day after day of gains..scraping along the upper channel line..and on its way to the next big psy' level of 6000. As I noted the other day, are we looking at Trans 7k end 2013, with SP'1700s? It has to at least be considered, even by yours truly.
--

Underlying MACD cycle on most of the indexes is certainly weaker than it was, but its still positive cycle, and generally..everything really does look outright bullish.

A retracement is of course very viable at any point, and indeed, the higher we go, the more closer we are to getting one. Yet, even a pull back to sp'1450/40 now looks somewhat difficult, and the lower gap of sp'1425 looks arguably out of range.

Frankly, it could be a very considerable time before we fill that gap @ 1425.